So yeah I was bored, like really bored, and two things popped into my head while contemplating something to keep me occupied until the Q4 release

Of course the latter remark popped into my head while reading a thread by Deluvian about taking his fuel Conda as far from sol as possible (there were others but that’s where I got inspired), so some maths crunching & calculating how far he would get I wrote this …

if indeed you had 464T on board

which brings me to another point... it can be beaten, I reckon you could get 158.3LY away from the star using a different ship which would break the 65,800LY barrier but would take you 28days solid to get there.


I got my cutter out of the shipyard and brushed the dust off it – fitting name for the vessel would be “Lemon” because it could all go south pretty quickly
I calculated I could get over the necessary 41.4LY JR so I could make the jump without the FSD booster, I just needed to time the fuel right because the jump range was very close on MAX!

I quickly got it outfitted and left shinrata with a miniscule fuel scoop and lots & lots of fuel tanks, like seriously a stupid amount of fuel on board, so much so class 6D thrusters were inadequate to get it off the landing pad!

848T, and a ~28 day Supercruise lay ahead, but some quick SC testing sent me back to Jameson memorial to get my fuel T/hr down, I wanted it as low as possible, and thanks to me being a module hoarder I had some silly but daft legacy modules you wouldn’t even modify in today’s scheme which had interesting effects on my T/Hr – while I needed less than ~2T/Hr to beat the record (which the cutter easily achieves) - but the final outfitting & figure will remain somewhat a mystery...

why you ask, well because I left the star at a certain angle, im sure if someone with better maths than I could almost match or potentially beat my distance, so with my t/hr kept a quiet little secret along with outfitting (other than lots of fuel tanks) so at least anyone trying to beat it will have to actually do some work themselves rather than copy / paste a Coriolis build.

So yeah you need a cutter and some fuel tanks

Three things concerned me about this trip…

Also the lack of scanners made the commute out there exactly that, interestingly I picked up a handful of populated systems meaning I had visited them before in previous runs out here, not always knowing where the star was (if thrown in a binary system) was annoying but manageable

Progress was quick (comparatively) with the neutrons, might be a crap fuel scoop but that extra range worked out to be the most efficient way to traverse space (thanks to spansh) but was still a lot of jumps!

Hats off to you barge flyers out there too, steering the cutter away from binary stars is painful, which led to one emergency stop along the way as it just would not turn quick enough!
It surprised me how far I could actually go on “one tank” all 848T of it mind because even my max jumps were hardly noticeable on the fuel tank and I was doing some 90-100 jumps I think (I kept losing count!!!) Which got me wondering if you could make it without a scoop doing economical jumps.

Anyway perhaps that’s one for someone else equally mad

The other fun thing about the trip is your fuel management skills getting to OEVASY SG-Y D0 because you need a jump of 82.68LY to get from OEVASY NA-A D0 - OEVASY RG-Y D0 (which means 41.34LY+G3) and if you it up you will be sat burning fuel

Unfortunately I did this bit up and had to do some fuel management!

I finally arrived at Semotus beacon on the 1st of October and spent an ice age re-fuelling, I couldn’t get too close to the star without overheating so couldn’t scoop at full efficiency (and also things move so yeah!), so there I was finally “fuel scooping complete”

All non-essential systems off… and off into the black.

The days drifted by….

The cutter was still flying admirably and a quick check showed it was now 65,770.8LY from Sol, past the “new record” achieved and at this point i thought maybe I should switch to solo, but…

Here I would put some other figures in but, the mathematically astute will be able to work some things out, and as I mentioned in the beginning… some things are better kept under wraps

But all you need to know is that I estimated I had another 35LY left in the tank.

The fuel gauge with 848T at its limit was difficult to judge where on the bar I could get down to and still get out, in all honesty I think I chickened out too early & I think I had some 20T left when I bottled it which could have got me further!! (The bar looked like it was on fumes and I panicked as the next fuel cycle was fast approaching) – Hindsight ay! 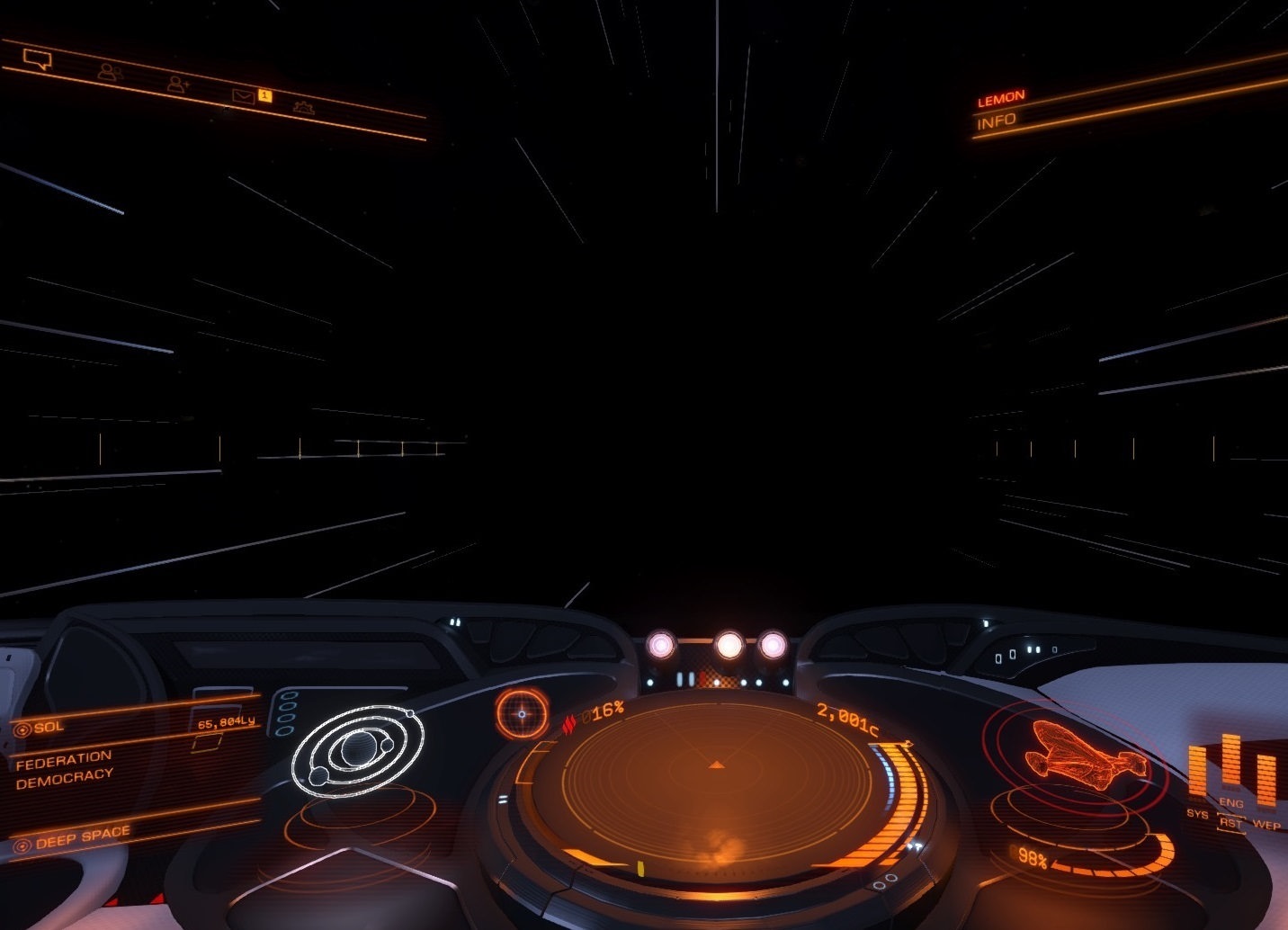 The hardest part… patience, not touching the controller - keeping a schedule to “check in” on the ship and finding something else to play

So a long commute back to the bubble, all in time for the update, hopefully; that’s what im rushing back for & it’s time to get this paint stripped cutter home.

A
o7 Cmdr but you (or the Xbox) have toooooo much time on your hands!

+1 For you and your boggled eyes!

Fly Safe on your return

Whoa there dude!
[up]

And to regain your sanity, watch this video 5 times in a row:
https://www.youtube.com/watch?v=LZlPGVJzd2k
[wacky] [haha] [wacko]

Congrats to achieve this record !

Arnoldo said:
o7 Cmdr but you (or the Xbox) have toooooo much time on your hands!
Click to expand...

My bookmarks have never been so organised, But the Xbox was the real CMDR here, i was more.... multi-crewing and popping along to check in.


Zieman said:
Whoa there dude!
[up]

And to regain your sanity, watch this video 5 times in a row:
https://www.youtube.com/watch?v=LZlPGVJzd2k
[wacky] [haha] [wacko]
Click to expand...

nope no no no, not again, in the realms of insanity yesterday while on fuel watch duty i came across your shenanigans and had to wash my eyes afterwards

Wow! That is quite the endeavour sir, congrats.

Plenty of time to brush up on your whack-bat skills.

Can't think of anything sensible to say
+1 (seems very inadequate)

Commander.. I bow my head really deep!!! First though.. It is nice to know that my insanity can be inspiring

As discussed, not a lot of Commanders truly understand what kind of commitment and determination is behind this type of endeavor.. and it is just one more way filling the gaps (not enough good engaging content).. let's go back to your success though:
Wonderful and astonishing.. I was very much hoping to do it in such a style, especially seeing achievement of Cmdr Keef Drow supported by Cmdr Major Klutz and later wonderful run by Cmdr Darivs Architectvs supported by Cmdr Ethereal Cereal.. I said to myself: "I understand, but guys.. this is not the time yet.. somebody's gotta stretch that galaxy in a single ship/single pilot setup first before we do the team effort".. Not a big excuse, but after disaster of DEL-77 Rocinante expedition and unconfirmed 65,739.. I was rushing too much.. Soledad is far away from Lemon, I would not be able to beat it by any means.. I will still continue my run however to establish my personal best distance..

Well, there is still Cmdr SpallBoy in the area flying his T9.. doing so many simulations and calculations, I do not believe T9 could beat the maximum result of the Cutter.. until some additional magic happens that I am again not aware of


Yet again, it would be an honor for me to stand "on the box" with #2 on it, right beside a pilot and engineer like you with the result of 65,804.4Ly from Sol that should not be even touched for a very very long time.. there are good reasons why it couldn't and we both know it

Have a safe trip back home...

65,804.4ly is a hell of an achievement. I'm currently still 8 days of flight time from finishing in the Type 9 and I don't expect to finish anywhere near you.

Well done again. Enjoy shooting something when you get back.

65,804.4ly is a hell of an achievement. I'm currently still 8 days of flight time from finishing in the Type 9 and I don't expect to finish anywhere near you.

Well done again. Enjoy shooting something when you get back.
Click to expand...

you must have fitted a FSD booster to get there though... i looked at the T9 but i could put more fuel into a cutter and also trim some fat from the important fuel using modules so to speak while still being able to get there... T/Hr that's the biggest thing.

i wont be doing it again i know that much, the jumping back without any scanners and a crappy fuel scoop is pretty much hell.

anyways the ship made it back safely and i mothballed it in the shipyard to gather dust, if ever i think of something this silly again i will look at the paint stripped cutter and think again! (hopefully)

Good luck on your flight into the black, more so for your trip back

I do love the planning and dedication that goes into these distance attempts, and reading about them...

Newton however, must be facepalming.

Saool said:
I do love the planning and dedication that goes into these distance attempts, and reading about them...