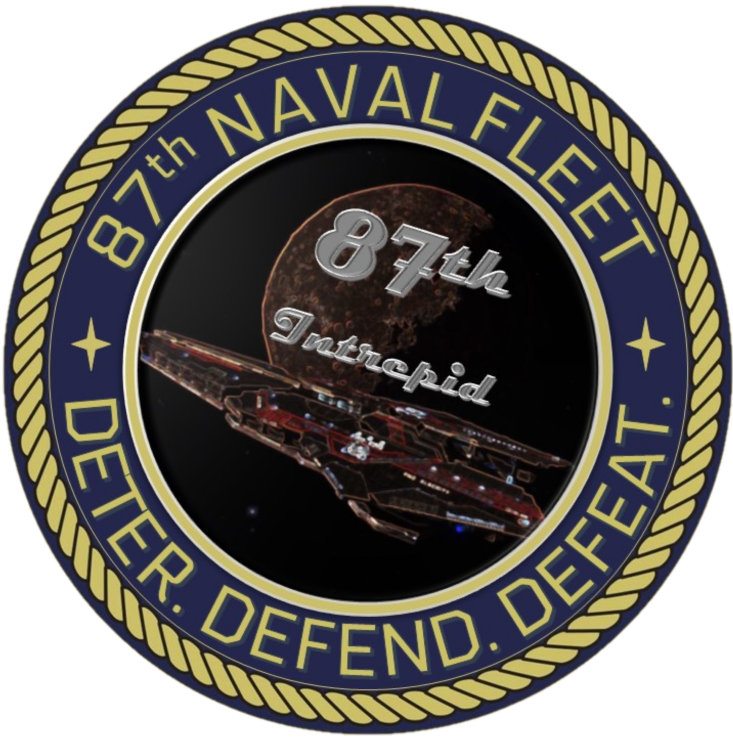 Check out the 87th NAVAL FLEET community on Discord - hang out with 50 other members and enjoy free voice and text chat.

discord.gg
CONTEXT
This is the response to what I have found many players complain is lacking in the game of Elite Dangerous. An actual story driven campaign to excite player involvement in the game.

I myself have put over 800 hours into Elite Dangerous. I get it. To some that isn't all that much...but to others its actually a lot. Yet so many of those hours feel empty. They feel as if I'm forcing some kind of meaning into something that should already have that meaning. Why is it that missions feel flat? Why is it that a bounty hunter mission or a ground attack base mission feels hollow or simple? Why is there not a greater feeling of accomplishment?

Frankly that is beyond the scope of this post. There are many things that affect the sort of empty feeling that nothing matters in Elite. YET I WANT TO OFFER A POTENTIAL REMEDY.


WHAT IS THE 87th NAVAL FLEET
Bluntly? A Federation military squadron. Yes. Fundamentally this is a recruitment post. (Empire/Alliance/Independent players keep reading. I'd like to set up an opposition squadron to have fun with too)

But are we like other squadrons? No. No we are not. I have personally been part of squadrons on Inara and on Discord. Federal Republican Guard, Federal Republic Command, Federal Liberal Command, etc etc. It seems so strange that all of these squadrons felt very objective driven. Play the BGS (Background Simulation), play powerplay, take a PvP stance against other player groups. EVEN some dedicated roleplay groups felt strange because they felt dead, with little direction. Just acting as a mere shell for people to say they were roleplaying in. Yet there was little sense of group cohesion.

This is when I realized I wanted to provide people with a genuine alternative.

A military squadron with actual story based content. Objectives not aimed at fulfilling some checks on the BGS or powerplay, but story objectives that might not be rewarded with in game rewards but that serve the purpose of our story.

A Character Bio. I have uploaded a template that I borrowed from another RP heavy discord. Filling this out helps everyone in the squadron gather a context for what you stand for and how your commander has been shaped by events in the galaxy.

Ships? Fly what you want. Hell even Cutters. I have one. Call it an undercover Federation vessel. I don't care. Its a story. There are a million reasons why the Federation could have Cutters in their fleet. Hell maybe it was an Imperial vessel inherited from an Imperial System navy that flipped to the Federation. Kinda how East German and Poland forces became NATO while still operating Soviet equipment...

In-Game Participation? ... I have a job. I have a real life. I'm not a streamer. This is not EvE Online. I'm not expecting you to be on call in case we get attacked at 3 am. No. But once a month it would be nice if most of us gathered for an ingame operation of a couple hours. Perhaps more often.

Discord Participation? ... Again I do have a job...BUT I do check Discord daily. This is a source of character development and roleplay beyond what is in Elite. Responding and participating in the Discord really helps with character development and in discussion of galactic news from a Federation perspective. I'm pretty creative coming up with discussion in the Lounge channel of the Discord. Helps get everyone involved more with the squadron.

So...What do you all do?
A bit of everything really. We're trying to build numbers right now. It's difficult to do anything with 3 people. We have a few more members but many seem inactive. WHICH IS FINE (I'll explain later in expectations BUT I DO NOT EXPECT EVERYONE LOGGING IN EVERY WEEK).

But we need members to make what we want to do to actually work.

We want to do all of these. Notice how some of these aren't exactly rewarded/objective driven in Elite Dangerous. But in the 87th...they are. How and why?

Well think about it. We want to have scenarios where we advance the Federation's mission portfolio. But we don't want to do it for no reason.

See? There's room for a variety of play-styles. Admittedly many are combat oriented. BUT we, I CMDR ALEXANDER SEPULVEDA, am trying to create more mission profiles to get a federation playstyle flair to many of the career paths in Elite Dangerous.

We want to be ready to incorporate fleet carriers when they enter the game. We want to be able to be able to influence the world of Elite Dangerous in a Federation manner. BUT that means having rivals. Imperial Pilots, Alliance Commanders. Please. Stand against us!


STRUCTURE
The 87th Naval Fleet has a Discord and an ingame squadron.

We support a friendly Player Run Faction, TerraLite Industries. A Federation Corporation on the edge of the bubble. We're looking to help them as part of our mission. We allow other Federation officers of other groups to hold a representation role in our Discord. TerraLite is the only one at this time.

ADMIRAL - is me. Alexander Sepulveda. I'm in charge of overall organization and leadership. BUT THIS IS A GROUP EFFORT! I can't possibly plan everything. Please do take initiative in reaching out to suggest things we as a squadron should get involved with.

REAR ADMIRALS - are basically equivalent to me. Just show passion with the project. Show deep interest in the whole effort and you can have this position. I just want people in this role who want to take part of the overall story crafting of the group and direction.

CAPTAINS - Each wing will have its captain. They court-martial as they see fit, order wings around in the absence of an Admiral or Rear Admiral. They report to the Admiral and can issue wing wide orders. Again these positions are available to whomever feels they could have fun with them. Feel you want to drive the story? Sign up.

ENSIGNS - You're part of the 87th. Follow orders and participate in the Lounge and contribute with ideas!


CONCLUSION!
Just give us a shot. Imperial. Alliance. Independent. FEDERATION.

Whatever your allegiance or even squadron allegiance, we'd love to have you in the squadron to at the very least show support for missions and doing activities with other pilots driven by a desire to give context and meaning to their time spent in Elite.
Last edited: Dec 9, 2019
You must log in or register to reply here.
Share:
Facebook Twitter Reddit WhatsApp Email Share Link
Top Bottom