A General, Personal, and Partial Wishlist

F
Planet Zoo is the closest any game has come to recapturing the youthful excitement of tinkering around in Zoo Tycoon while combining it with a more modern love for as many bits and bobs of creative pieces as possible. In light of that, while it may just be shouting into the wind in the end, I decided to write up a wishlist of various odds and ends I'd like to see in a game that I desire to see grow and evolve to greater heights. A couple of caveats before the list(s), however.

1. These wishlist segments are specifically for things that could feasibly exist under the current framework. For instance, while aviaries and aquariums built on the current terrarium/vivarium exhibit system is desirable, they are omitted from being part of this wishlist as any potential plans for animals that rely on full 3D spatial movement are not known at this time.

2. As the title implies, this list has no attempt to be impersonal or impartial. People are shaped by their experiences, and my wishlist is no different; my own experiences with zoos are shaped by my geographic location, feasibility of zoos to visit, personal tastes in animals, and the like, and this in turn is reflected in what ends up making my cut for a wishlist.

3. While not a necessary step to take, I decided to limit my animal wishlist to species I've seen in at least two zoos, and preferably in a majority of zoos I've been to. I've tried to avoid referring to them as 'common' or 'ubiquitous' as much as I can, however, since there is an innate bias to what animals I've seen based on my location in the world.

With those three statements out of the way, I'll waste no further time heading into the wishlist proper, which I've divided into segments for clarity. I allowed myself the most room for habitat animals, then contracted my paragraphs from there. 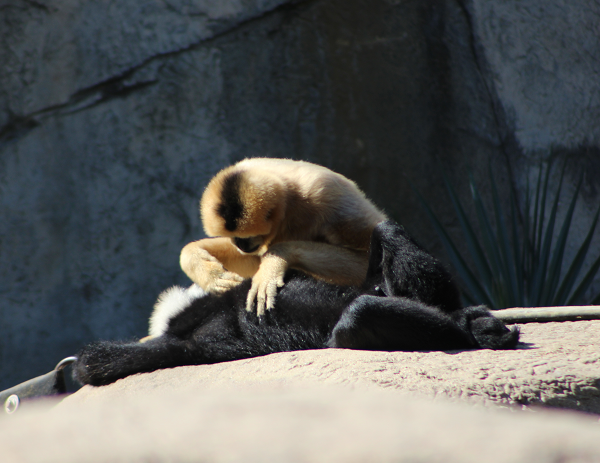 Habitat Animals
American Alligator (Alligator mississippiensis): An iconic North American reptile and one of only two crocodilians native to the United States of America, the American alligator is the larger of the two living species of alligatorid in the world. On top of being a frequent staple of zoological parks in North America, American alligators can be found on the rosters of zoos worldwide such as Germany's Tierpark Berlin and New Zealand's Auckland Zoo. Its inclusion into Planet Zoo isn't hurt by the fact that we already have an alligator silhouette sign in the game's decorations.

Black Rhinoceros (Diceros bicornis) and White Rhinoceros (Ceratotherium simum): It can't be denied that the Indian rhinoceros cuts a striking figure; in terms of personally biased exposure, however, I've got much more experience with its African kin. In addition to geographic and physical differences with the Indian rhino, the black rhinoceros in particular also has the American alligator's backdoor ticket of being present in existing decorations.

Jaguar (Panthera onca): The jaguar is the only living member of its genus in the Americas, would help fill in the dearth of South American habitat animals in the game, and already has decorations in-game. What's not to like about that trifecta? It's also an excuse to have classical Maya architecture as building materials, if some of the jaguar spaces I've seen in reality are anything to go by.

Northern White-Cheeked Gibbon (Nomascus leucogenys): Pictured above at the Fort Worth Zoo, the white-cheeked gibbon is high on my admittedly rather small list of primates I'd personally champion to have added to the Planet Zoo, not all of which even made it into the trimmed version of this post. On top of striking sexually dimorphic coloration, these apes have rather different proportions to the game's 'great apes' and lemurs, similarly differing ground locomotion, and are critically endangered to boot. My only concern with gibbons would be their movement through brachiation, but hey, that didn't stop the Bornean orangutan from being present.

Elk/Wapiti (Cervus canadensis): On top of being another deer besides the reindeer, the wapiti acts as a representative for both North America and Asia. They're also another species that finds its way into multi-species habitats, with neighbors such as wild turkey, whitetail deer, and American bison.

Alligator Snapping Turtle (Macrochelys temminckii): There's probably no better candidate for very large testudine kept in captivity that isn't one of the land tortoises already in PZ. While primarily aquatic, the alligator snapping turtle bypasses the whole 3D spatial swimming issue by conveniently spending most of its time either sitting on the bottom or slowly trundling along it in a manner not unlike what's already implemented for hippopotami. I'm also biased in its favor just because I think it's a really nice looking turtle.

Capybara (Hydrochoerus hydrochaeris): Putting aside its Internet memetic status, this placid giant cavy is a genuinely popular zoo animal. It also sometimes shares enclosure space with waterfowl and other South American animals such as tapirs, rheas, and giant anteaters.

Marabou Stork (Leptoptilos crumenifer): The marabou is a large ground-stalking bird whose nature as a ground stalking predator allows it to slip past the need for flight mechanics much in the same way the greater flamingo and Indian peafowl have. While various species of guineafowl and ground hornbills are also African savannah birds that zoos like to slip in with their mammal compatriots (and are also animals I wouldn't mind seeing in Planet Zoo), I chose the marabou to feature on this list thanks to striking appearance, size, and slow marching walk.

Southern Cassowary (Casuarius casuarius): Speaking of striking large ground birds, the colorful and intimidating southern cassowary definitely fits that bill as well. It's also another animal that could fill in the blanks for Australia's almost empty habitat animal list.

Black-Handed Spider Monkey (Ateles geoffroyi): Planet Zoo's got the great apes on lockdown, but its only monkeys as of now are the mandrill and Japanese macaque. With a current lack of any American primates and the aforementioned general dearth of South American habitat animals in general, I put forth the black-handed spider monkey as a potential candidate. The black howler monkey's also another good choice.

Red Kangaroo (Macropus rufus): Another of those iconic animals of Australia found in zoos the world over, sometimes kept in the same habitat as emus. The fact that this is an animal that wouldn't require just a new set of animations, but instead a new animation rig entirely, probably makes it a bit of a taller order than most. At the same time, however, kangaroos are a big deal, you know?

Reeves's Muntjac/Chinese Muntjac (Muntiacus reevesi): This one squeaked onto the list just because a forest-dwelling deer might be a nice ungulate to have in contrast to the fact that the game's current small ungulates are both savannah-dwelling antelope.

There are plenty of other animals I could point at as desired members of the game’s roster – mountain lion, addax, black and white colobus, Nile crocodile, red fox, giant eland, American black bear, yellow-backed duiker, whitetail deer, sun bear, red wolf, blackbuck, scimitar-horned oryx, sandhill crane, moose, the list goes on and on – but the above is the result of paring down a vast swathe of wildlife down to the highlights (for lack of a better term) for the sake of brevity on a forum. 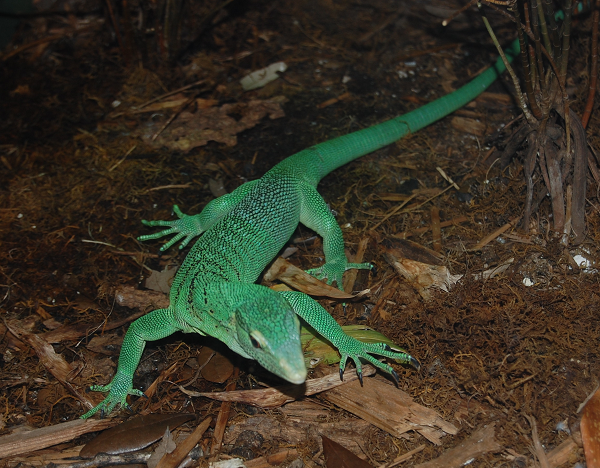 Exhibit Animals
Cottonmouth (Agkistrodon piscivorus), Copperhead (Agkistrodon contortix), Coastal Giant Salamander (Dicamptodon tenebrosus), and Common Box turtle (Terrapene carolina): As-is, what North American terrarium animals are in the game gravitate toward the deserts of the American Southwest and Mexico's tropical rainforests. With small aquatic turtles and aquatic amphibians such as the hellbender or two-toed amphiuma currently out of the picture, these are some potential current candidates that come to mind for other regions.

Habu (Protobothrops flavoviridis), Kaznakov's Viper (Vipera kaznakovi), and Gaboon Viper (Bitis gabonica): I don't really have much justification here beyond these being rather nice-looking vipers, honestly.

Green Tree Monitor (Varanus prasinus) and Savannah Monitor (Varanus exanthematicus): While the Nile monitor and Komodo dragon are large enough to be full habitat animals, these smaller monitor lizards might add a little something extra to the choices of exhibit terrariums. 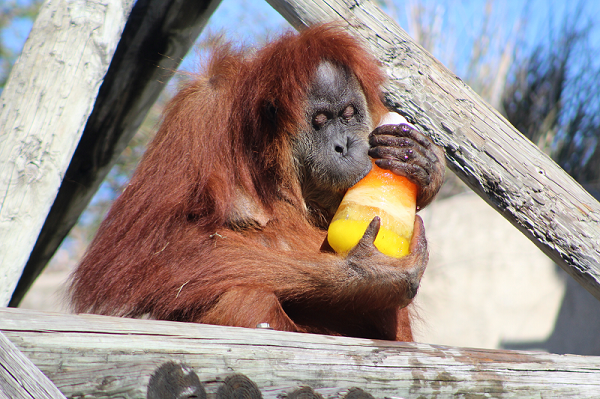 Foliage, Architecture, and Enrichment
Halloween Enrichment Items: Since we already got some Christmas-themed enrichment items in the December update, this is probably one of the most likely items on this list and is more of an observation on specifics. I had the fortune of visiting the Fort Worth Zoo around Halloween 2019, and got to see food enrichment such as corn cobs for mandrills, iced fruit blocks evoking candy corn for Sumatran orangutans, and dried corn stalks for black rhinoceros.

Southern US Plant Life: The North American plant selection right now is heavily weighted toward more northerly climes or the deserts of the American Southwest. While there are a few appropriate plants for the southeastern US already in the game - primarily the arrowwood bush, azalea, beech, carpet moss, holly, lady fern, and wisteria; the bracken, sugar maple, and white birch are also visually close enough to shield ferns, paper birch, and southern sugar maple and that they can visually substitute without feeling 'off' - there are some pieces of foliage I see enough in both the wild and landscaping that I'd feel remiss not to have them dotting a zoo I created based around the area. I'd specifically call out bald cypress/swamp cypress (Taxodium distichum), Spanish moss (Tillandsia usneoides), switch cane/river cane (Arundinaria gigantea), hazelnut bush/American hazel (Corylus americana), dwarf palmetto (Sabal minor), cabbage palm/sabal palm (Sabal palmetto), pecan (Carya illinoinsis), shortleaf pine (Pinus echinata), southern magnolia (Magnolia grandiflora) and southern live oak (Quercus virginiana).

Rustic/Aged Building Pieces: While there are a few architecture sets such as the log walls and Arctic wood collections that have a weathered touch to them, I'd love to see more building pieces with a 'lived in' feel to them that aren't some manner of stone or mud brick. More fodder for some of the odder zoo setpieces I've seen around, like old sheds and rusting ships.

Vending Machines: Considering these already exist in Planet Coaster, this may be a case that's more 'when' than 'if'. Still, it doesn't hurt to have on a wishlist regardless.
Last edited: Jan 21, 2020

N
People keep getting the alligator sign backwards. It's not an alligator, it's a crocodile that has been misnamed. Not to say I wouldn't want the American alligator, they are the crocodilian I'm most familiar with largely because of Auckland Zoo.
You must log in or register to reply here.
Share:
Facebook Twitter Reddit WhatsApp Email Link
Top Bottom