No matter what I tried, anything perfectly animated in 3DS Max, imports into PlanCo at a roughly 30% angle. Static objects are no problem, but before anyone wastes days like I did, I thought I'd let you know. I wish the problem was on my end, then I can continue research, but I'm afraid it's not. Even tried the FBX viewer and all animation is correct. I don't know if Frontier will be in a rush to fix this, but I'll send in a support ticket.

This is a topic I found;
https://forums.planetcoaster.com/showthread.php/35119-TMT-uploads-are-all-shifted-now

It used to work until around Dec. 20th, since then animation-FBX files out of 3Ds Max will turn up broken in-game.
I gave quite a few revision file links when i reported the bug but apparently it was to no avail...

Now i have like half a dozen PlanCo items that are basically datacrap UNTIL this eventually (ever?) gets fixed (or not).

There's also a normal grade-distortion of some kind, but i spend very little time on testing nowadays, i just build stuff for my own park and not for the Workshop except a few items, still would be nice to be able to upload my animatronics and such.

Oh hey JCat, i remember your name from back in the RCT3 days. Cheers!

Hey, good to see you! Hope you're sticking around - love your TMT line up!

Don't remind me of it, too much frustration with the workshop, more even than the TMTK so let's dive into the TMT topic a little, in hopes this actually gets fixed.

This is (i know, keyframe animation doesn't work with TMT imports, this is an early model revision before bones replaced the keyframes)
one of my roman pillars in an animated setup, it SHOULD look something like this in PlanCo, but instead it's tilted and the animation is weirdly quantized and chopped.

Thing is, it doesn't make sense.. 45 degrees.. ok, 90 degrees.. even more logical, chopped animation,
yeah sometimes that makes sense too when you're hunting down the source of the error.

But 30...... C.c.c.cccc..cc.c.ome...on..
I almost went mad over this, i spend like 3 weeks with several animated models to get them to work ingame, and even the ones that worked before the bug appeared had the tilt on reupload, the items pre-bug still work as they always did, as long as i don't update them.

It's no translational error, it must be either a line of code with a wrong prefix or something that was optimized for Blender imports (in December) caused this bug to appear.

Multi-Talented! Great sound. That falling column would be great -- if they get 3DS Max animation working again. I left a message in the TMT bug report section over a month ago. I think because there are very few Max users, it's not a top priority.

I did the same in Dec./Jan., it got processed as the post was deleted from the bug thread, but nothing got fixed apparently.
hm, not a top priority.. i actually don't think it's a complicated bug, i have a strong suspicion it's a wrong digit in the wrong line of code.
I've done a lot of 3D work, but i NEVER experienced something this illogical during data translation.

90:3=30 is the most logical thing that springs to mind. Maybe an accidental divide calculation on the angle xyz reorientation?
But then again that doesn't explain the animation screwup.

When TMTK was released in Nov. it all worked fine, except for the general bugs most Blender users experienced as well.
Animation with bones did work normally, animation frames were correctly translated into game. (both worked, rootbone and dummyroot setups)

This is another reason i stopped doing regular uploads to the Workshop, you invest soo much time and work and all you get out of it is pure frustration on every level,
I don't even know how many hours i sunk into fruitless testing in order to find workarounds and crunch filesizes in a way so the converter wouldn't bloat them up,
leaving you with slow-loading textures. Shading tests, (see the Ice Rock i made, that's a result of one week of shadertesting)
testing the correct settings, colour profiles (to sRGB or to not sRGB? pun intended) and all that. But people had nothing better to do than complain about the filesizes...which in comparison to others' items are tiny for what they include. So i just keep to using the TMTK and ignore the Workshop, and keep to myself, except for showing off my Park.


I used to have all the Trackworx packs back in the days, great stuff! I never got into RCT3 modding but i loved spending time building detailed parks and rides, so those mods were a joy to use! Thank you!
Last edited: Apr 18, 2019

JCat, can you test something? I've encountered another issue regarding max and TMTK, might be related to the other bug(s).

If you build an object that's supposed to have the pivot at its side, like a pillar with bottom pivot, then rotated by 90 degrees
(in this example both with and without rotated pivot-axis, doesn'T make a difference).
Hitbox too, also with its pivot aligned with world 0.

When importing an object like that (in my case it was the cables, i wanted to have the pivot at one end for a few particular variations, to make ingame-placement easier)
the object wouldn't be selectable once placed inworld, instead it seems like the "selection box" is mirrored and you can only select it like it was rotated by 180deg (there's nothing but thin air) Do you get the same error?

I know this, too, wasn't there before end of december, so my suspicion is they fixed the scaling for Blender and consequentially, the max-specific code became faulty.
Rotation[orientation], rotation[scale], animation timing. They weren't faulty before that december update.

Did you try to import and reexport your animations through Blender?
Didn't try that yet, as i would need to dig deeper into Blender to find out how to get the bone rig over from max without harm.
Baking the animation won't do it any good, except if you made new bones and attached them to where they are supposed to go.
Doesn't look like the bug is gonna get fixed any time soon, gotta find a not-so-work-intensive solution.

Sorry, ArtiX - dog is not doing well, so she's been getting most of my attention. What did you want tested - or did you solve whatever problem you were having? I haven't used TMT in a couple of weeks now. I'm assuming Frontier hasn't fixed the export problem for 3D Max?

JCat1 said:
Sorry, ArtiX - dog is not doing well, so she's been getting most of my attention. What did you want tested - or did you solve whatever problem you were having? I haven't used TMT in a couple of weeks now. I'm assuming Frontier hasn't fixed the export problem for 3D Max?
Click to expand...

Sorry to hear all the best to you two!
Don't worry about it, the TMTK is down for a few days in a row now, so there's no way of testing it.
No, so far they haven't. I'm still hoping the downtime is a good sign,
but since there hasn't been ANY piece of information on it in days, i'm beginning to doubt that.

What i wanted to look into was a orientation error with the Hitbox, it seems to mirror the axis. It becomes obvious when you have the pivot set to either end of the object in X or Y(though i only tested X forward). When i imported the item i couldn't select it. After a few minutes i found out you COULD select the object, but only by clicking next to the object, as if there was a mirrored ghost of the item, that's gotta be the hitbox. It seems to turn 180° upon import.

Sorry to bring this thread back up, but i've come back on trying to examine the cause for the tilting.

Again, i assume there must be some scaling applied to the rotational values, or at least the initial bone rotation.
There SEEMS to have been a recent update to the converter, the rotations themselves now look correctly (not in the true sense, just axis-wise), however, the initial tilt is still the same. 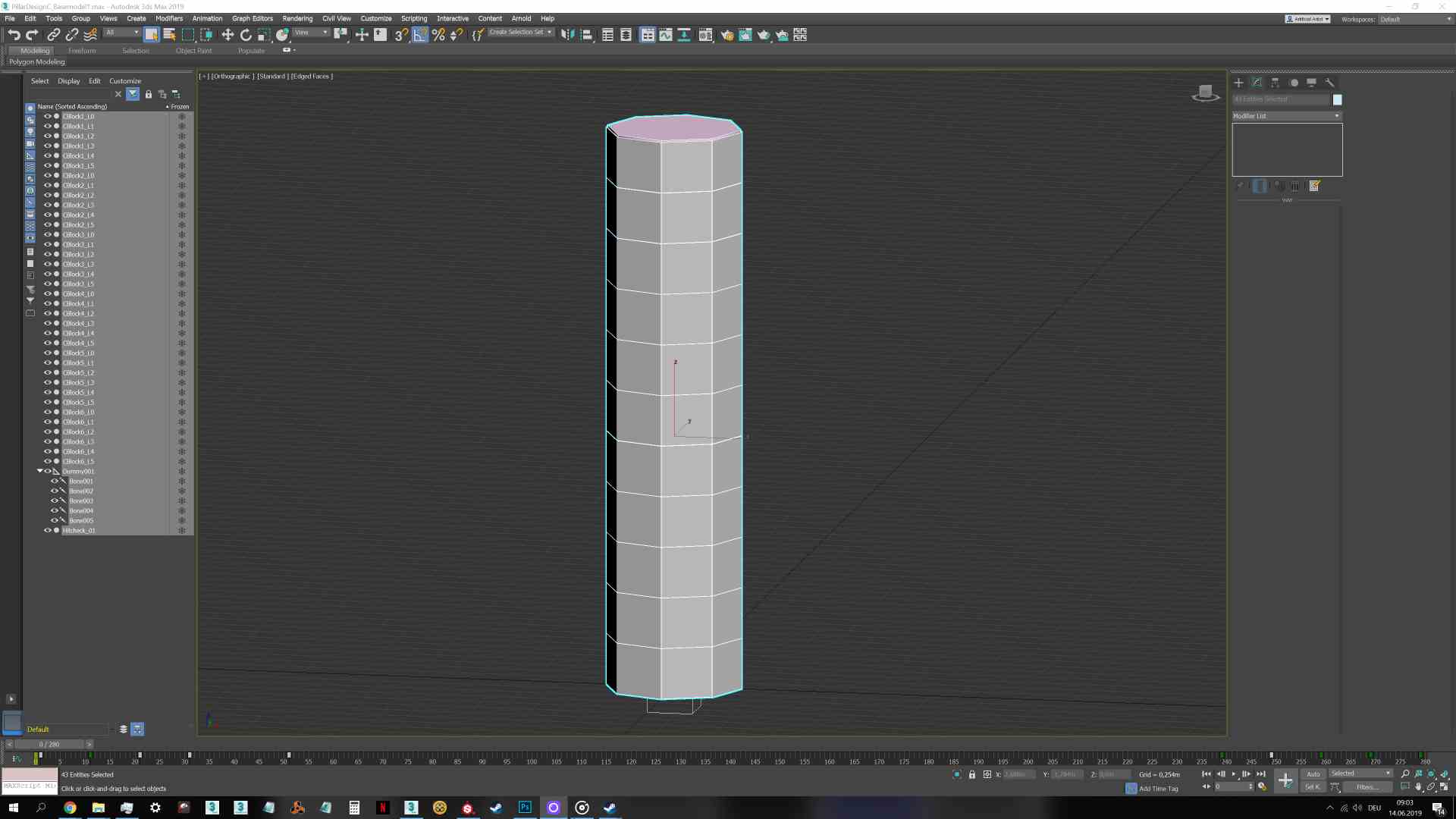 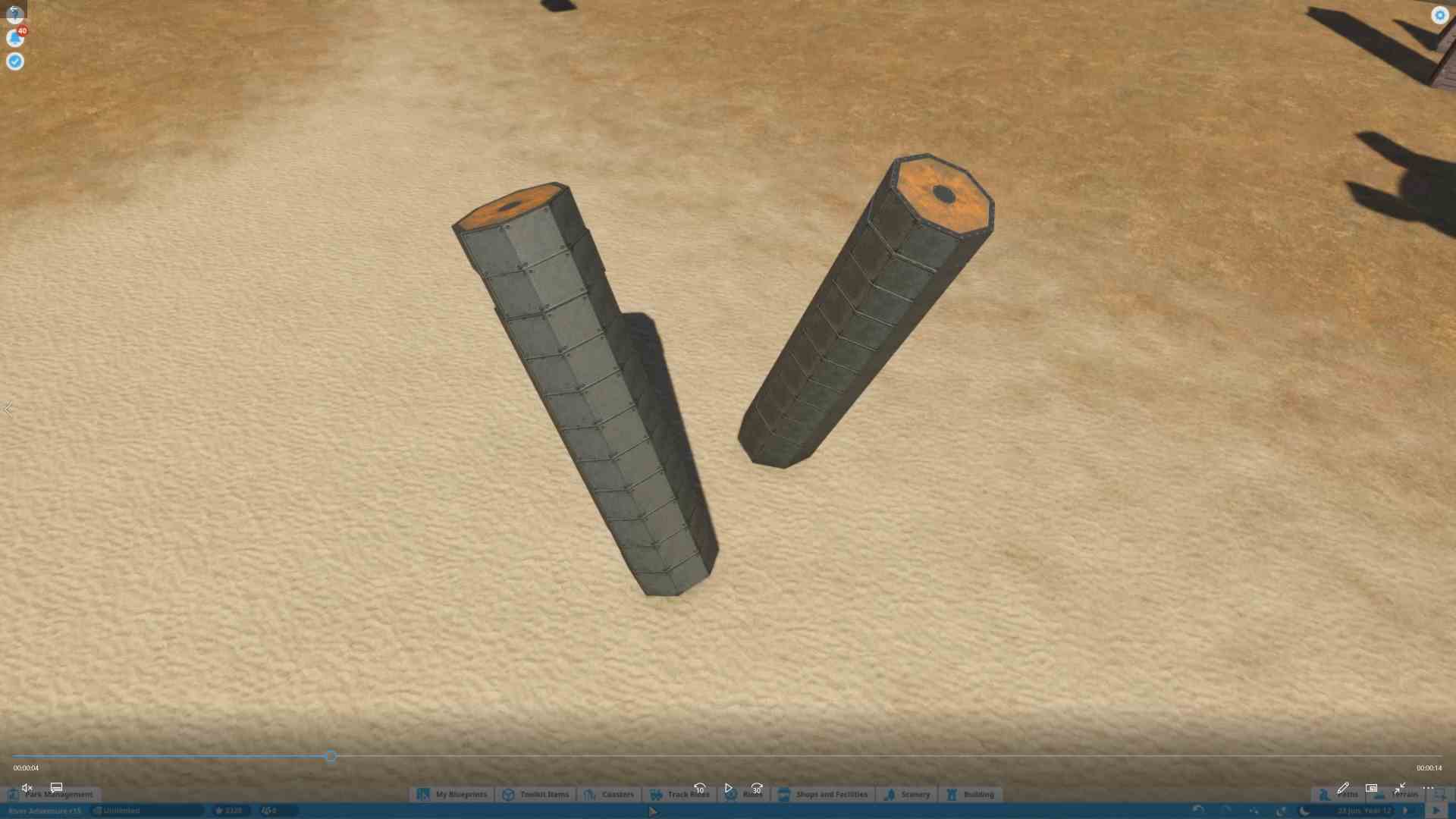 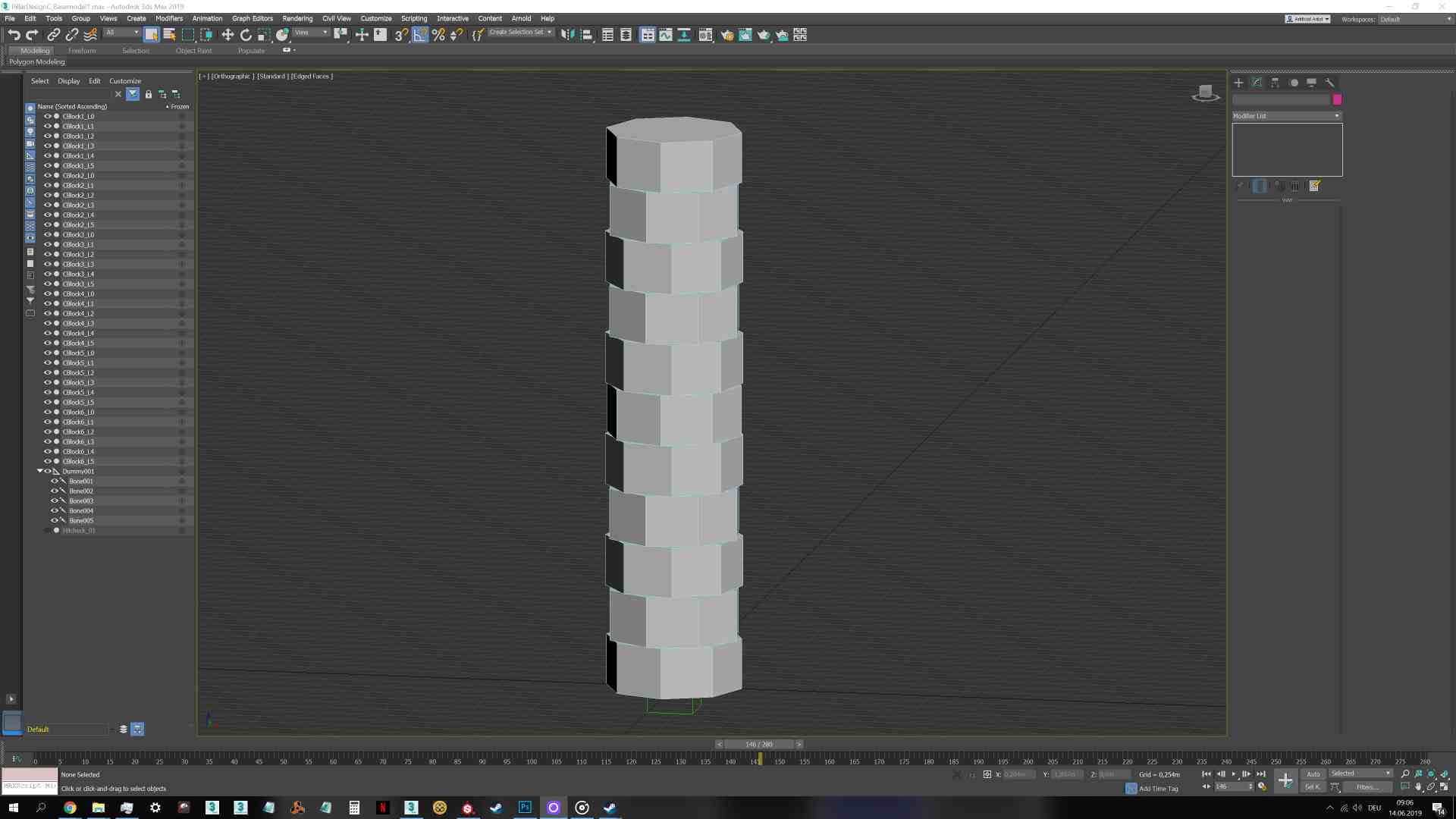 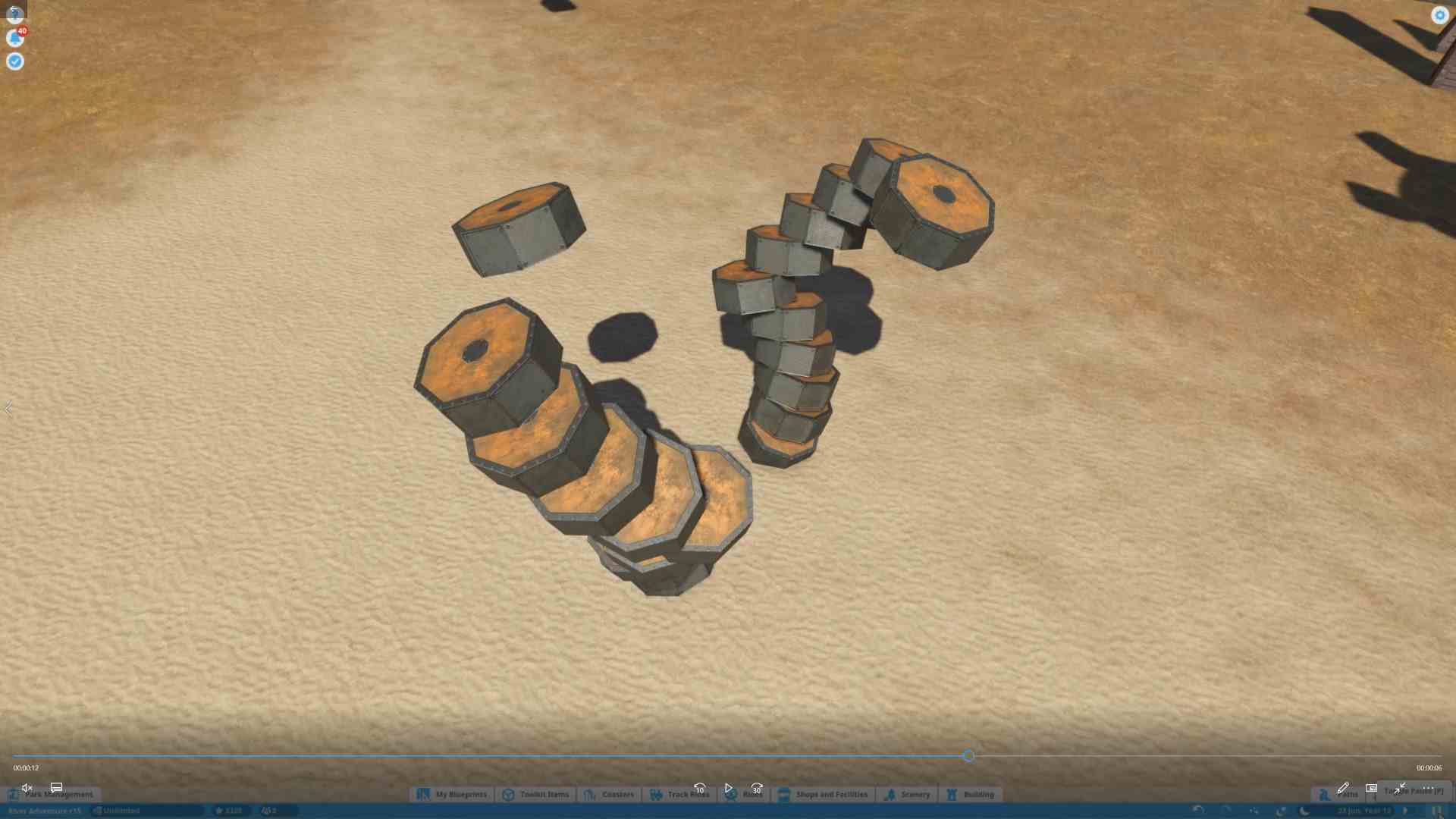 I'll attempt to liken the angle of the root bone to the angle tilt that happens ingame, however, i think it will not fix the animation's tilt.
I'll try to circumvent that, too, by moving the mesh only.

SOLUTION: All max animations, after the rig is completed need to be rotated by -22.5 -18 degrees along the Y world(!) axis.
I will test more workaround solutions, but after the previous converter update the rotational axes are now working correctly, there still is a tilt of the rig within PlanCo after import.
You need to rotate the full rig, not only the bones or the meshes. Select all objects you want to export and rotate them.


As i long suspected, this has to do with a scale issue that seems to apply to the base rotation of the root bone.
Before the last update there was also a mirroring issue, which made it even more complicated to pinpoint the error source
(18 times 5 sums up to 90 degrees) Tested in 3ds max 2019


Export settings: Binary2019 works, use a dummy as root bone. FBX Settings are shown below:

I'll look into the scale some more, a unit switch might actually fix this. Still need to do some more tests though to be sure. For now, this is a workable fix to the animation issue.
I'll keep you updated on the progress.
Last edited: Jun 14, 2019

CORRECTION: I know why i gave up on it back in december... ignore the solution above.

Turns out it's something between 19.75 and 20 degrees offset, which isn't logical in ANY way and the rotational offset is random on almost every upload.
I do not get it... sorry.. it makes zero sense...absolutely zero... tried scale steps, to no avail. Tested different tilt angles, with one exception, all uploads were unsuccessful in their correct translation. I guess i will go with the one upload that worked and do some more testing next week. I thought i was close to the solution,
but once again the converter was just taunting me, i guess. There seems to be some difference with the position of the root bone, but there wouldn't be a general solution, as every model would need to be handled differently. It's somewhere in the position/rotation combination.
Tired of testing, this is giving me headaches.

Can you maybe add a little video, how this object work in game? I think, that some players (which includes myself) have currently no idea, how they can integrate this column in their park projects.
You must log in or register to reply here.
Share:
Facebook Twitter Reddit WhatsApp Email Link
Top Bottom