As soon as I knew that we were able to build our own buildings on this game, the first thing I wanted to recreate are different buildings from my local zoo. I tried to build something during the beta but without any success, but now I tried again and finally I have been able to create something

It was my first big building and it contains some design mistakes, but I'll update it.

It is available on steam workshop: 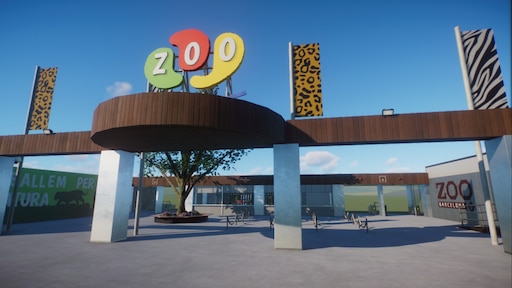 I have many other building to create from that zoo, one already created, but that I'll show later
Last edited: Nov 26, 2019

The biggest current project at Barcelona Zoo is the new Sahel area, with exhibits mainly for elephants, giraffes and lions. It started with some temporary improvements, specially for elephants, but if I'm not wrong, the first species to have a fully new (not temporary) exhibit were the giraffes. Their exhibit have a new modern shelter that although looking modern, it perfectly fits on the natural environtment that surronds the exhibit.

When recreating it, I had to modify some parts of the building to adapt it to the game. For example, all the access doors to the indoor area are wider, to allow giraffes to get in. The real one have a narrower access points. 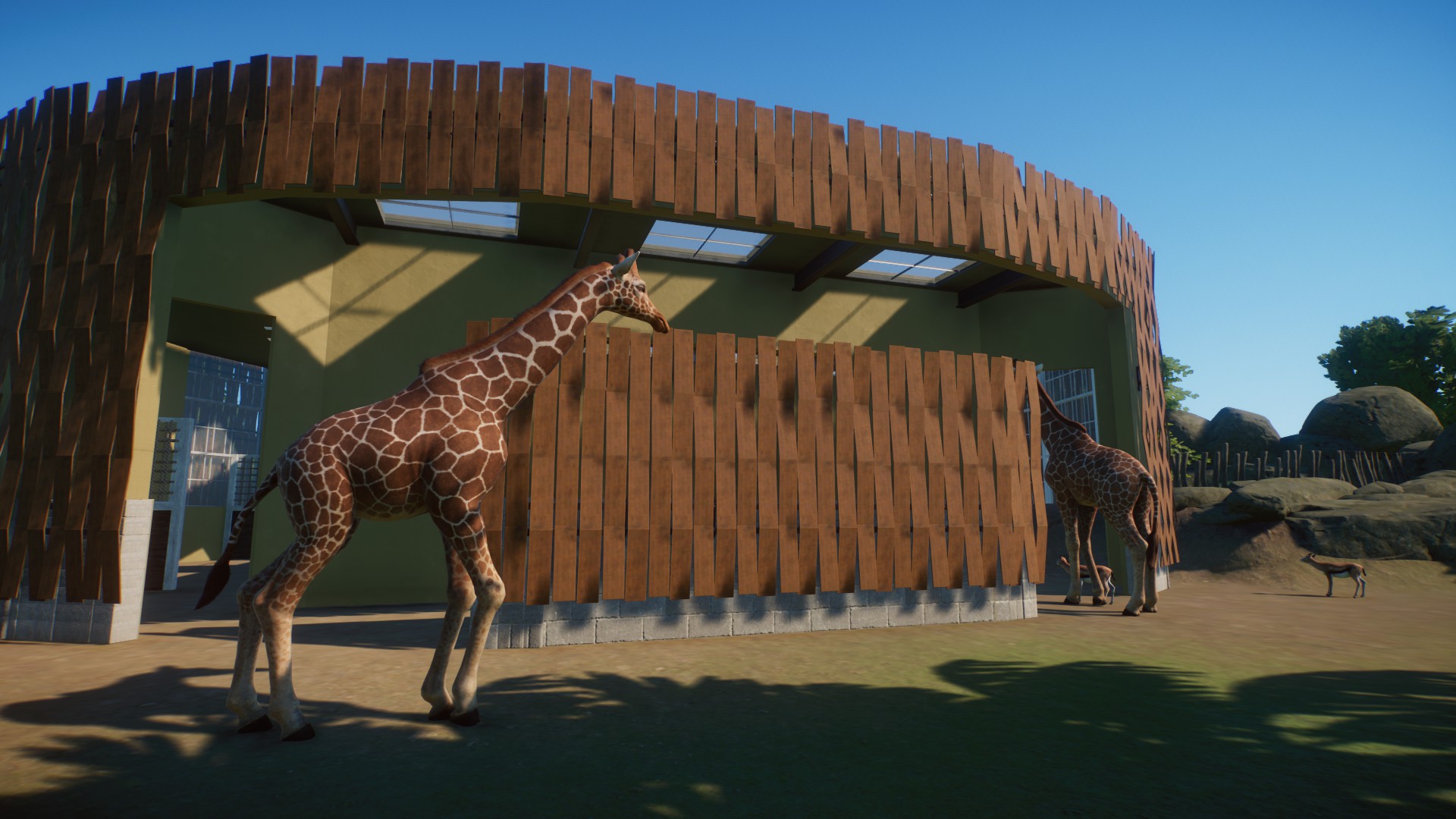 The real shelter have a observation window on one side, but I decided to don't include it by default, as it is a window that unless you build an elevated path on that side, can't be reached by guests Anyway, it can be easily created just removing the wooden cover, as behind it there are glass windows. 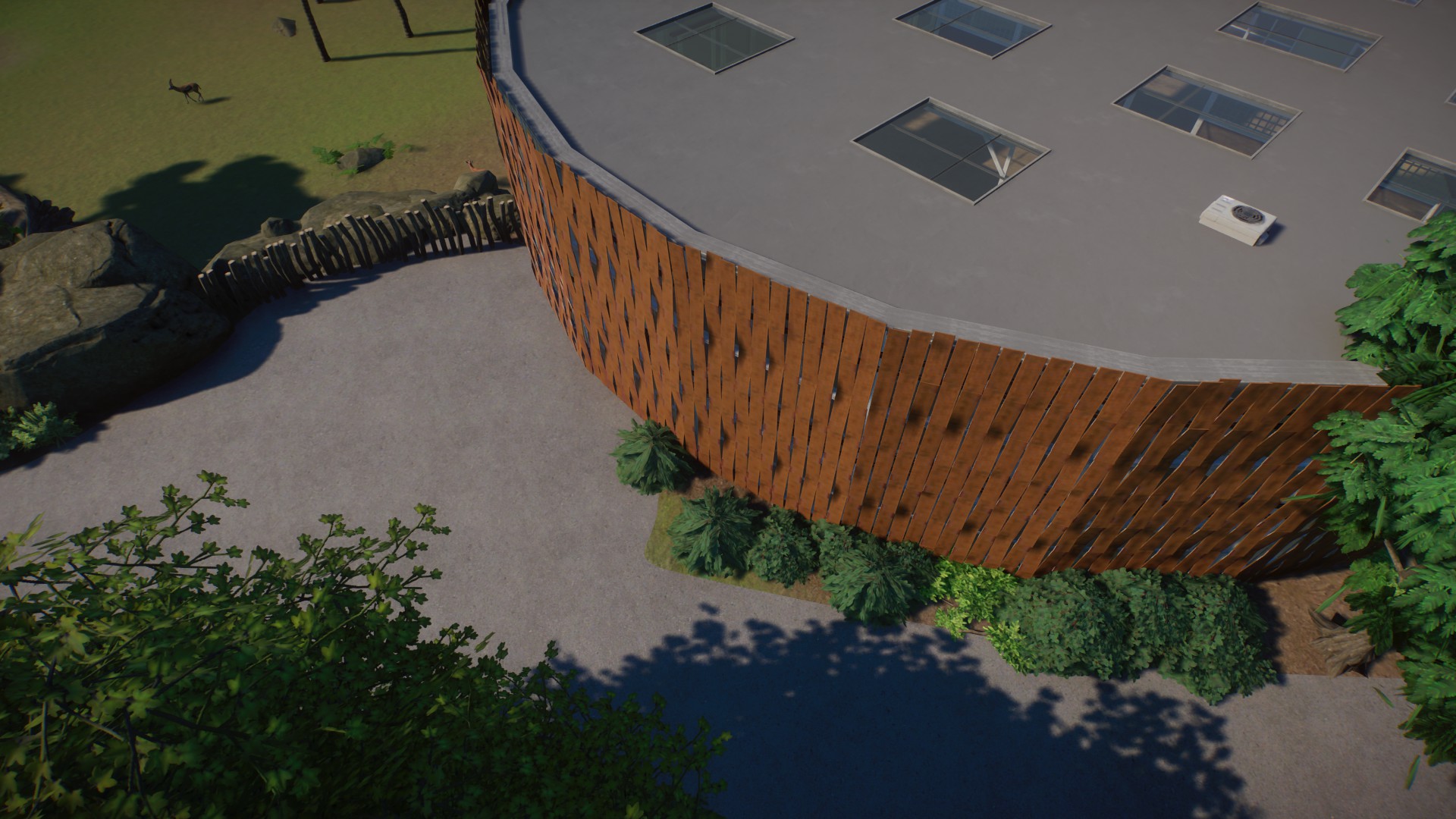 This shelter is not only for giraffes, it is also the home of gazelles (and a spurred african tortoise). I decided to create a detailed indoor area, as much close to the real one but also making it functional. The side doors of the shelter can only be accessed by smaller animals, like gazelles. The central part can be accessed by giraffes and other animals. 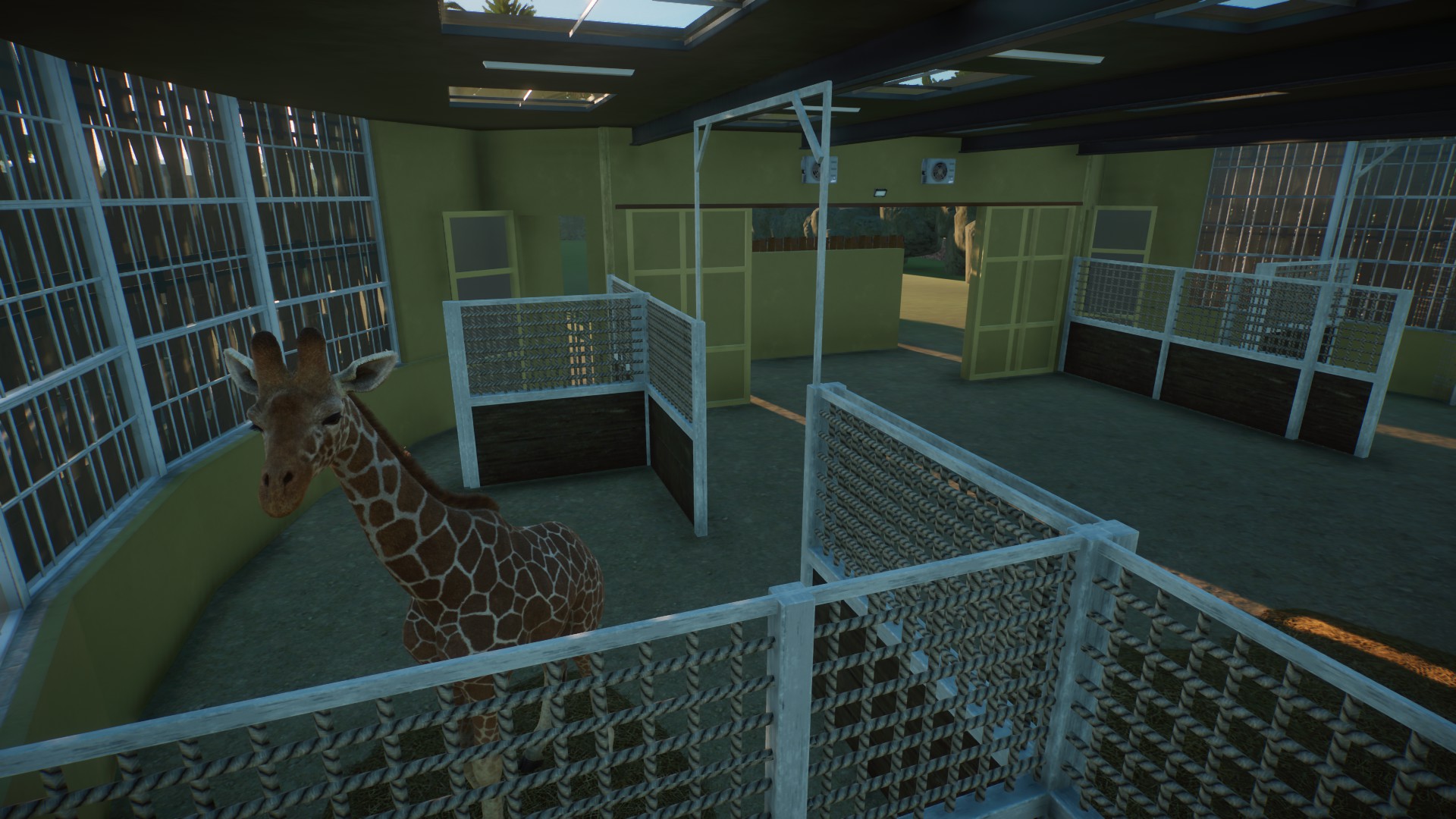 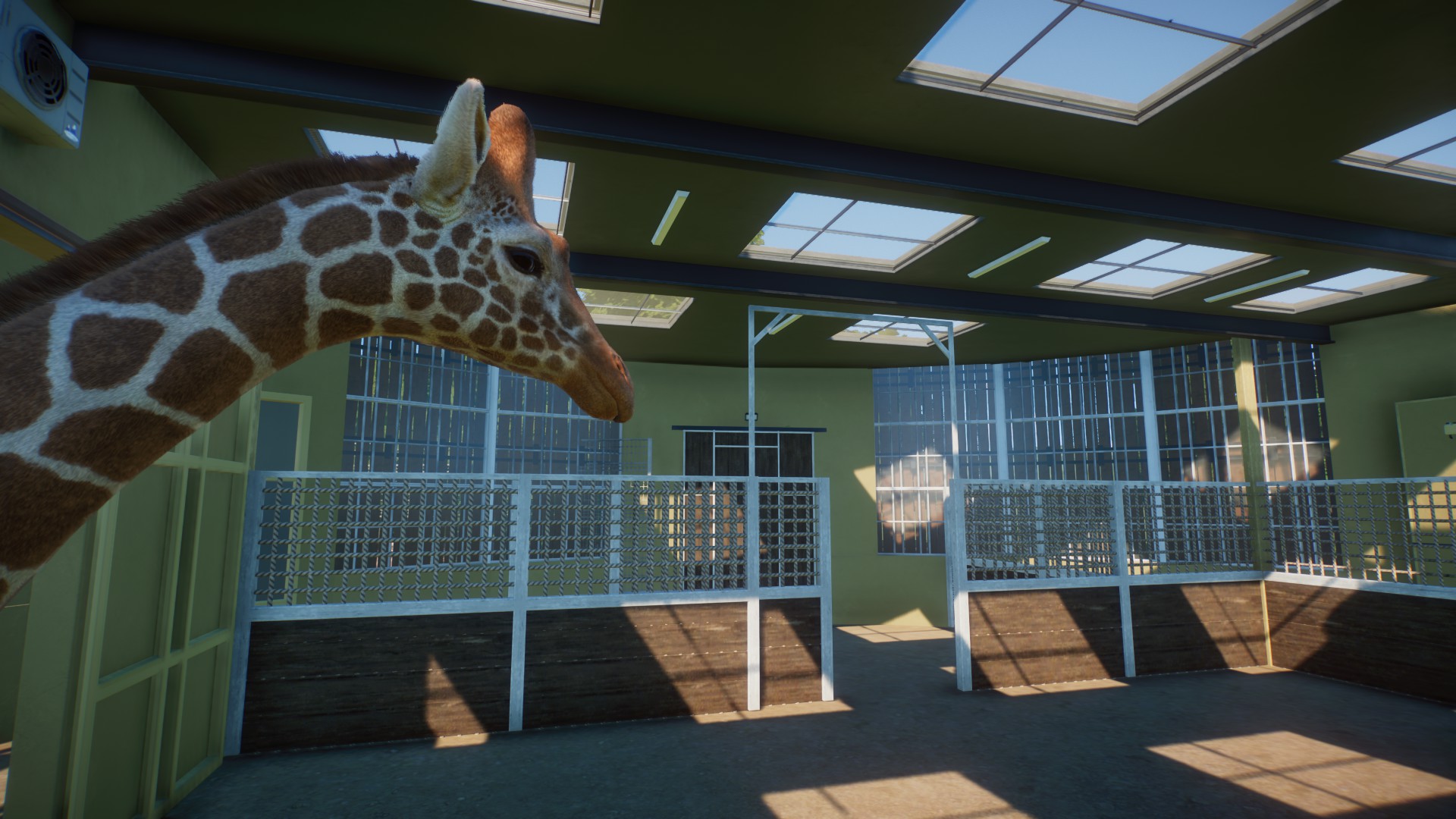 If you like it, you can find it at the workshop: 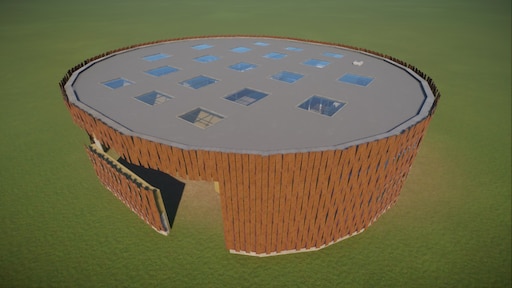 That's an amazing work, Aim! Both the facade and the interiors look pretty much the same as the real thing!

M
I love the zoo in Barcelona, please continue your great work =)

I really like the Entrance-Building and the Indoor-Enclosure for the Giraffes.
If you decide to build the Gorilla-Enclosure too, there should be a white Gorilla inside

Thanks! I'm glad to see youlike it

Nice to see the night stables for the giraffes at Barcelona Zoo. I think this is the first time I see such a good recreation of an zoo stable in Planet Zoo.

Now I come with my favourite place of the zoo, as is where I usually spend more time taking photos. The "Terrari" (Terrarium or Reptile House) was opened in 1972 and houses a collection of reptiles and some amphibians. In the past, it had a quite diverse amount of crocodilian species. 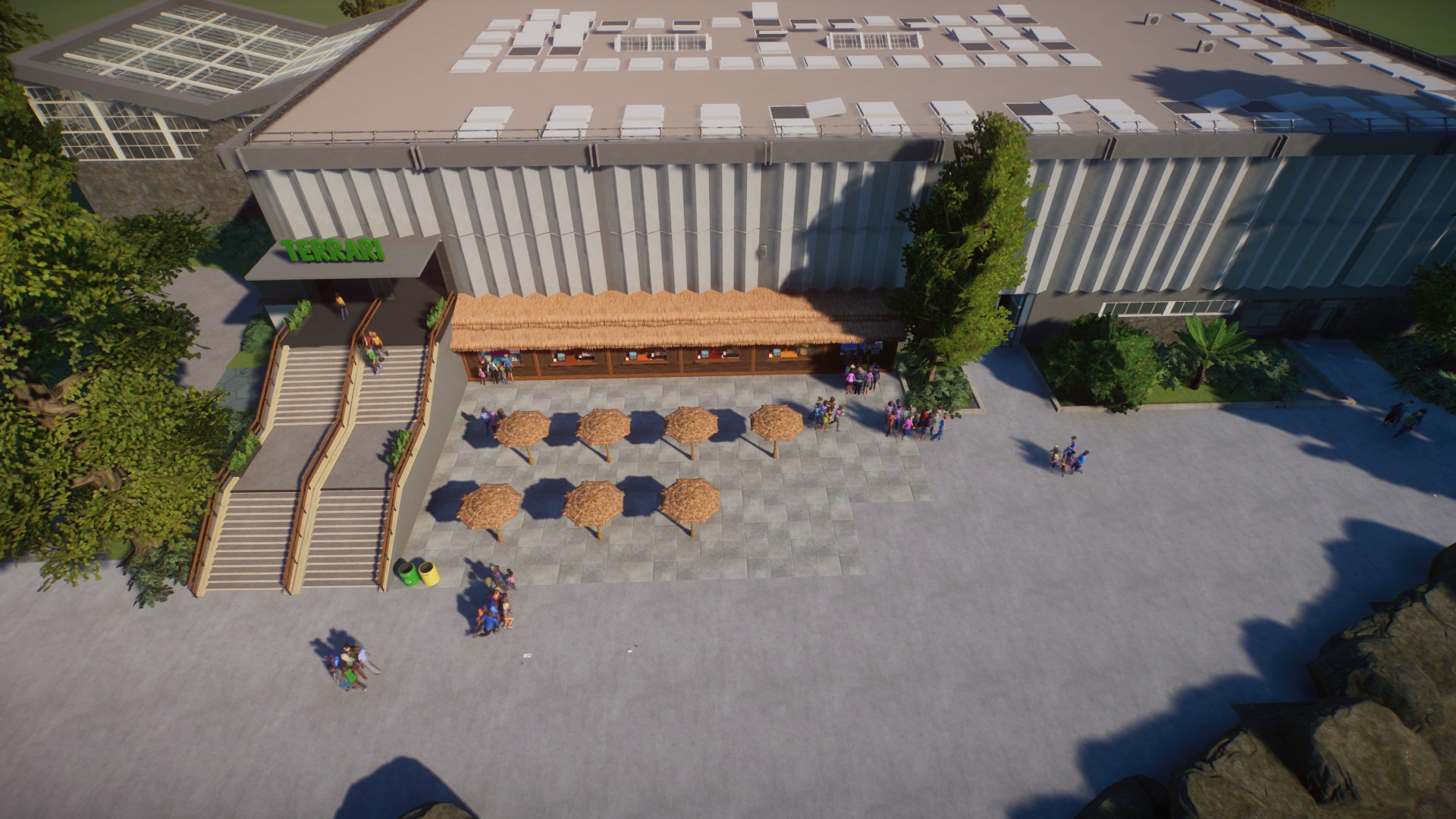 It is a building with three floors. The ground level floor is used as a warehouse and have other staff facilities. In this version, the ground floor is empty and there's an access point just under the main access stairs, so you can fill this space with electricity generators or other facilities. The second floor is the one that contains the public part, with all the terrariums. You can find many terrariums at each side and at the center. It was impossible to represent it excatly as the real building and keep the terrariums functional, but I think I managed to get something quite close 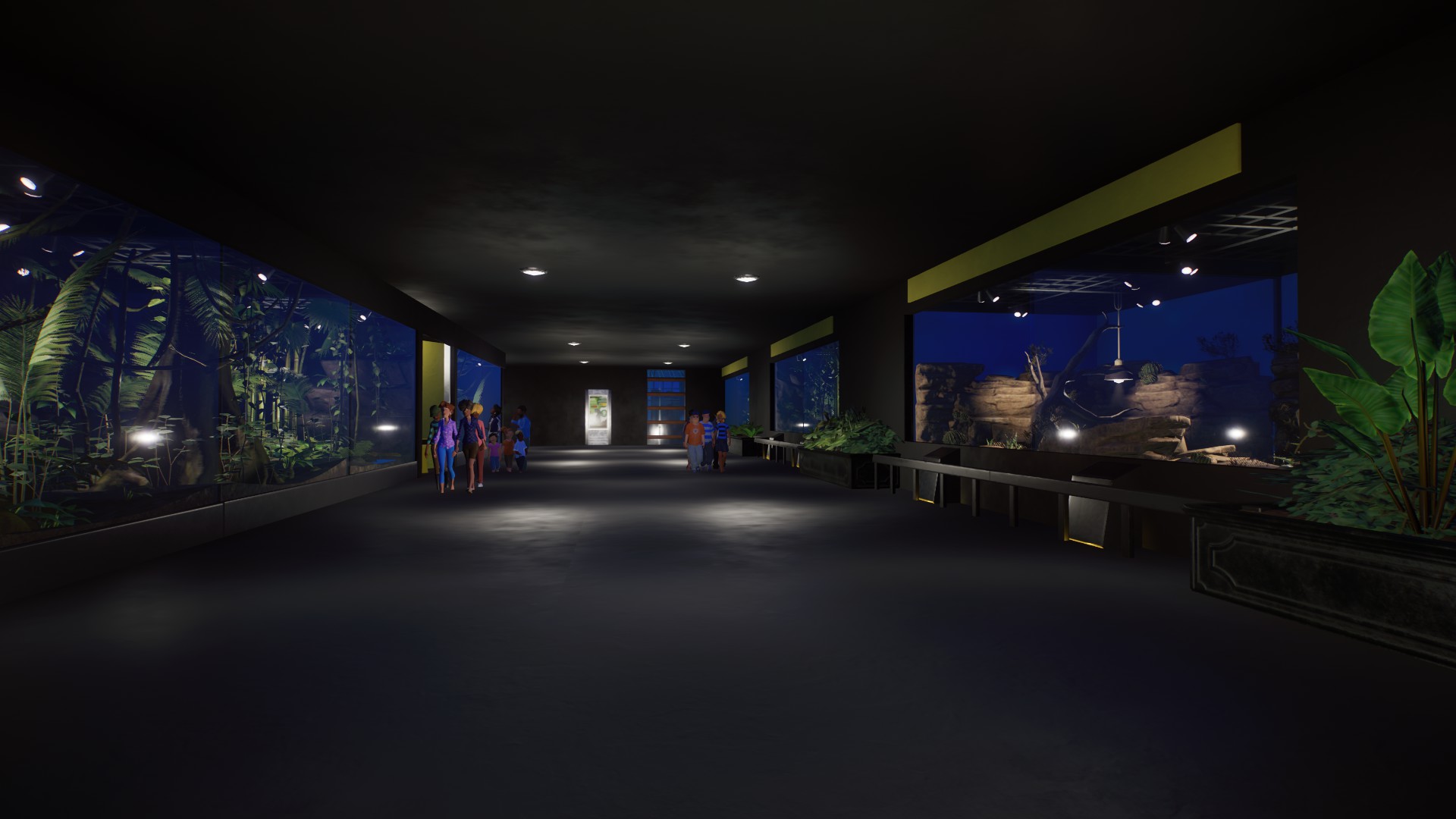 The third floor is not represented in this version, as is also a private space only for zoo staff (and for "school groups"). In front of the main facade you can place food/drinking stores.

Attached to the main building there's a greenhouse. I decided to leave it empty, so you can customize it. The real one have three exhibits for crocodiles and a path that goes from the second floor to the ground level, but there's not enough space to represent it in the game if I want to keep the proportions with the rest of the building. That's the main reason to leave it empty. In the past there was a balcony on the second floor. So, feel free to open a hole on that wall to connect both spaces and create your own exhibit inside the greenhouse 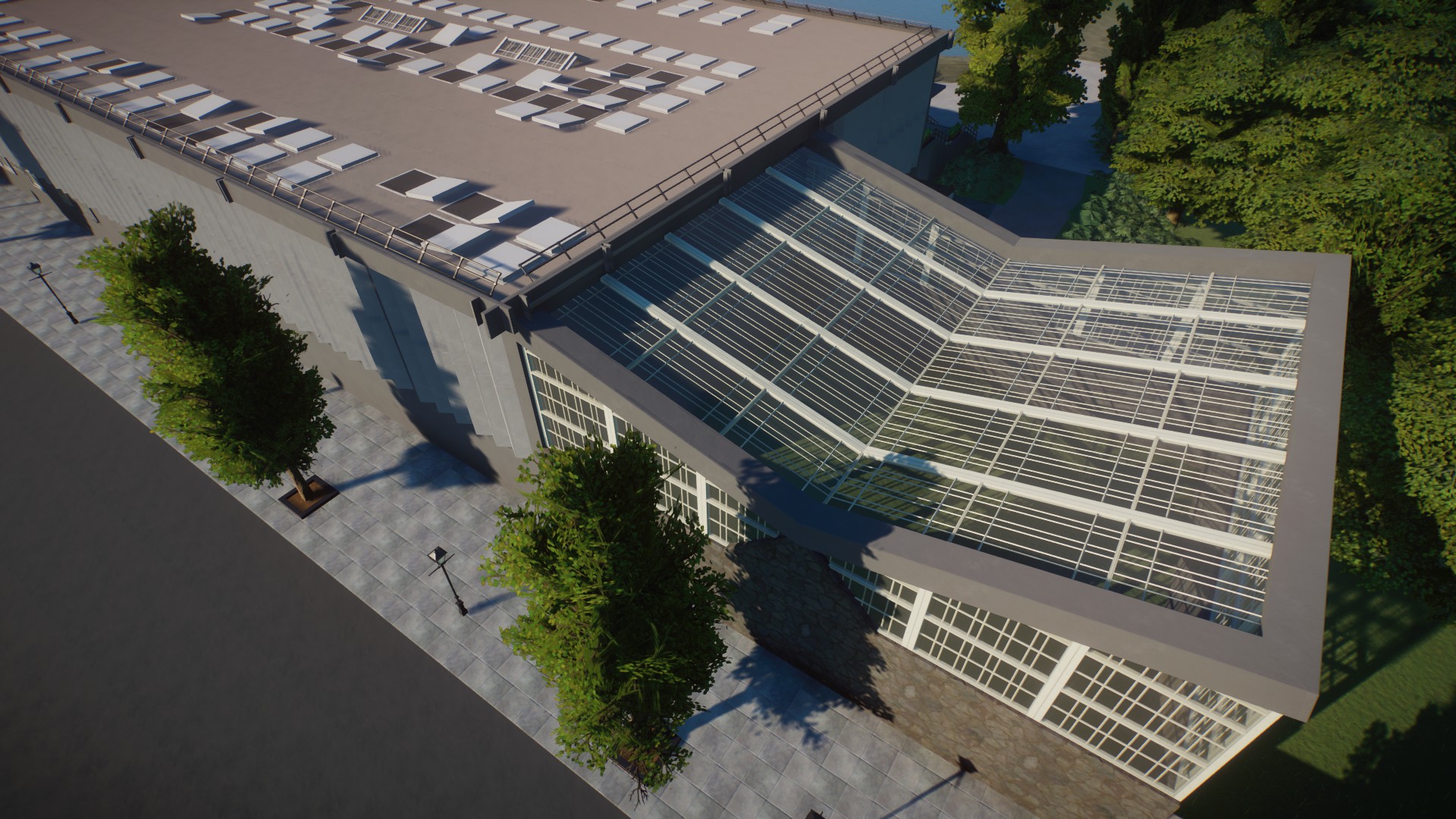 The building it a bit ugly, but I couldn't avoid to recreate it for the game, as is one of the most important buildings of the zoo. Hope you like it

You can find it on my workshop: 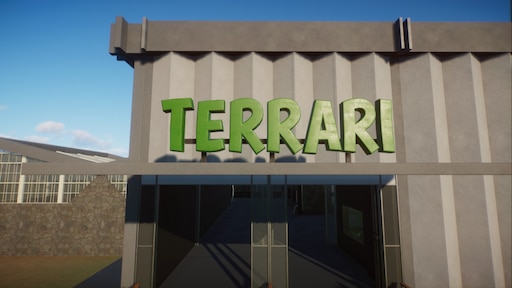 The biggest sculpture at the zoo is a big fountain with a lady holding an umbrella on top. This fountain was created in 1884 for the 1888 Barcelona Universal Exposition that took place in the current Ciutadella Park. Later, most of the buildings were demolished and the zoo was build on those lands, so now this fontain is inside the zoo premises.

I decided to recreate this fountain but making the lady would be too complex for me, so I decided to replace her by a dodo, which looks fine anyway If the original is called "La dama del paraigua" (Dama means lady), I named this one "El Dodo del Paraigua": 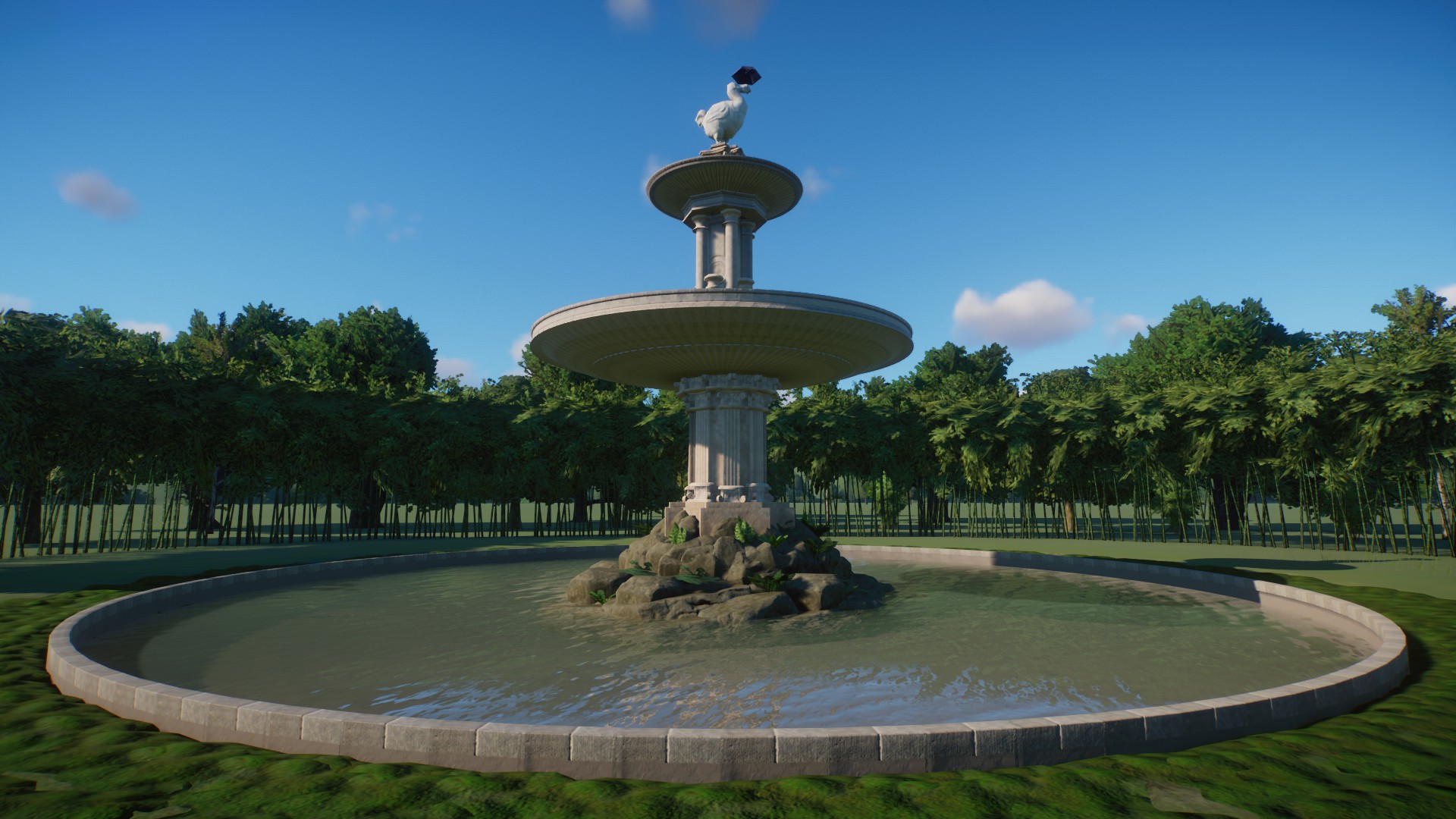 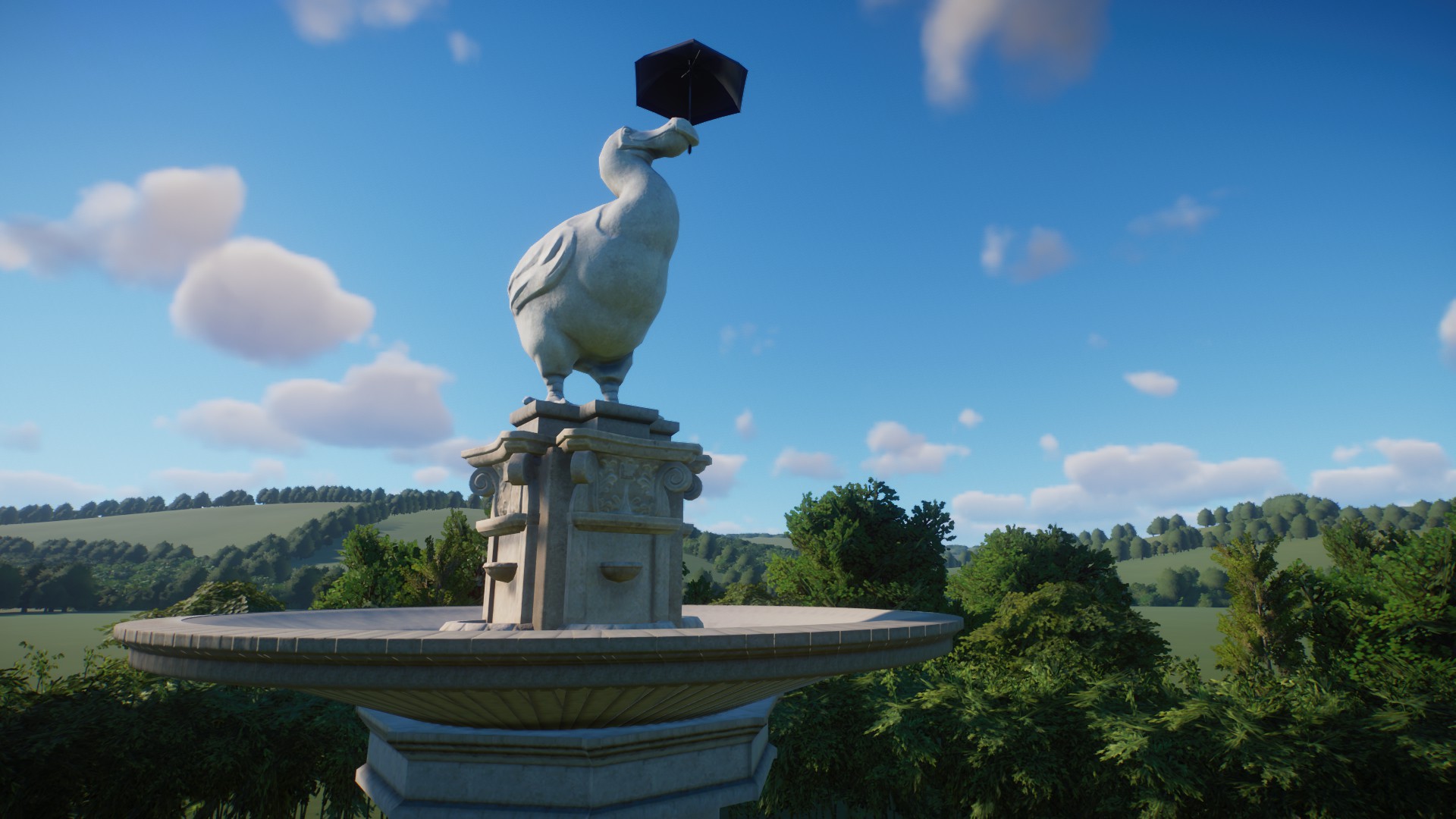 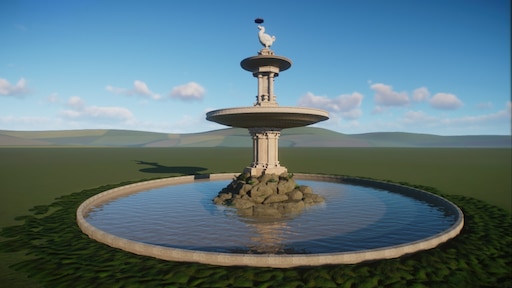 There can never be enough Dodos

I updated the zoo entrance, replacing the big "ZOO" sign using the default pieces by something more like the real one, which is the former logo of the zoo. I still need to work a little bit with the o's to make them smoother. I also added the entry/exit signs above the access points at each side. 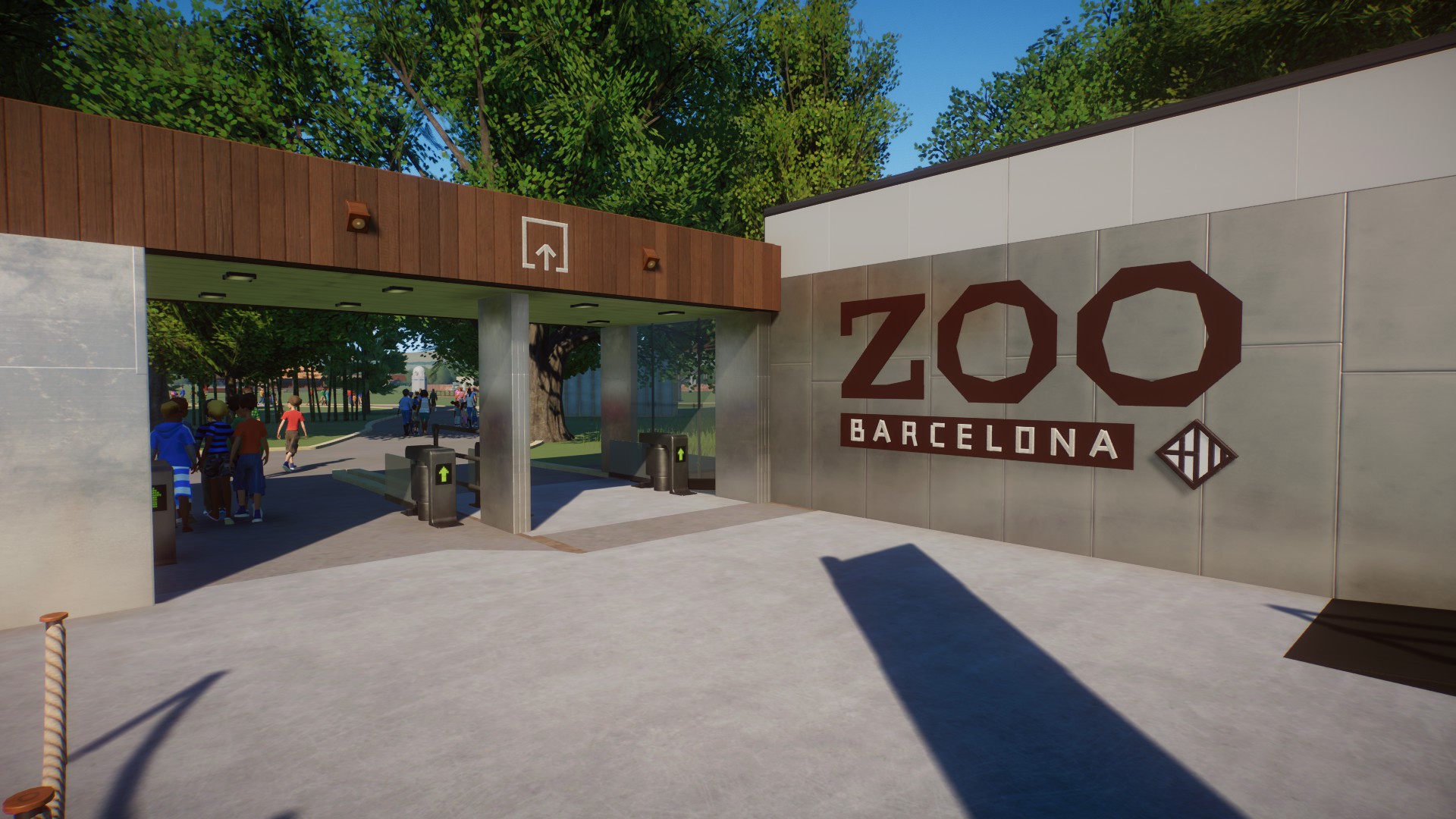 M
are you doing this in Sandbox? Would be great if you upload the whole zoo to the workshop at least some point in time

Yes, but at this moment I'm not recreating the entire zoo. I just have a sandbox map where I create all the buildings that I upload to the workshop.
You must log in or register to reply here.
Share:
Facebook Twitter Reddit WhatsApp Email Link
Top Bottom