Credits:
I'd like to thank LewisW ( λ λ λ λ λ ) for his creation of The Big one which I've featured in my park. He created the original coaster and station groundwork & also DigitalDan for the Icon Station, Gift Shop, Scenery, Queue line and also the Skyforce Station/Queue.! If I've missed anyone, please let me know. I was too busy playing the game to note down who created what...

So first I'm not the most creative of beings, i rely on workshop items quite a bit however i have decided to try and combine both what I've found from other users with my own skills and try to make a park! I love Blackpool Pleasure Beach, it's one of the oldest parks in the world and boasts some of the best rides in the UK. Check out the snaps below

I plan on having multiple entrances to my park, this is the main one. It was created within the workshop and I've changed it a little, added my own touches to it. The main entrance has a bus terminal and has the boundary road of the park running by it. Using animated coaster doors, i put these in place of fences so that when the parks open, i can set them to "open" or closed for when its out of season time. Currently the main entrance isn't doing anything because i started to build at the far side of the park, working my way towards this area again in the future. 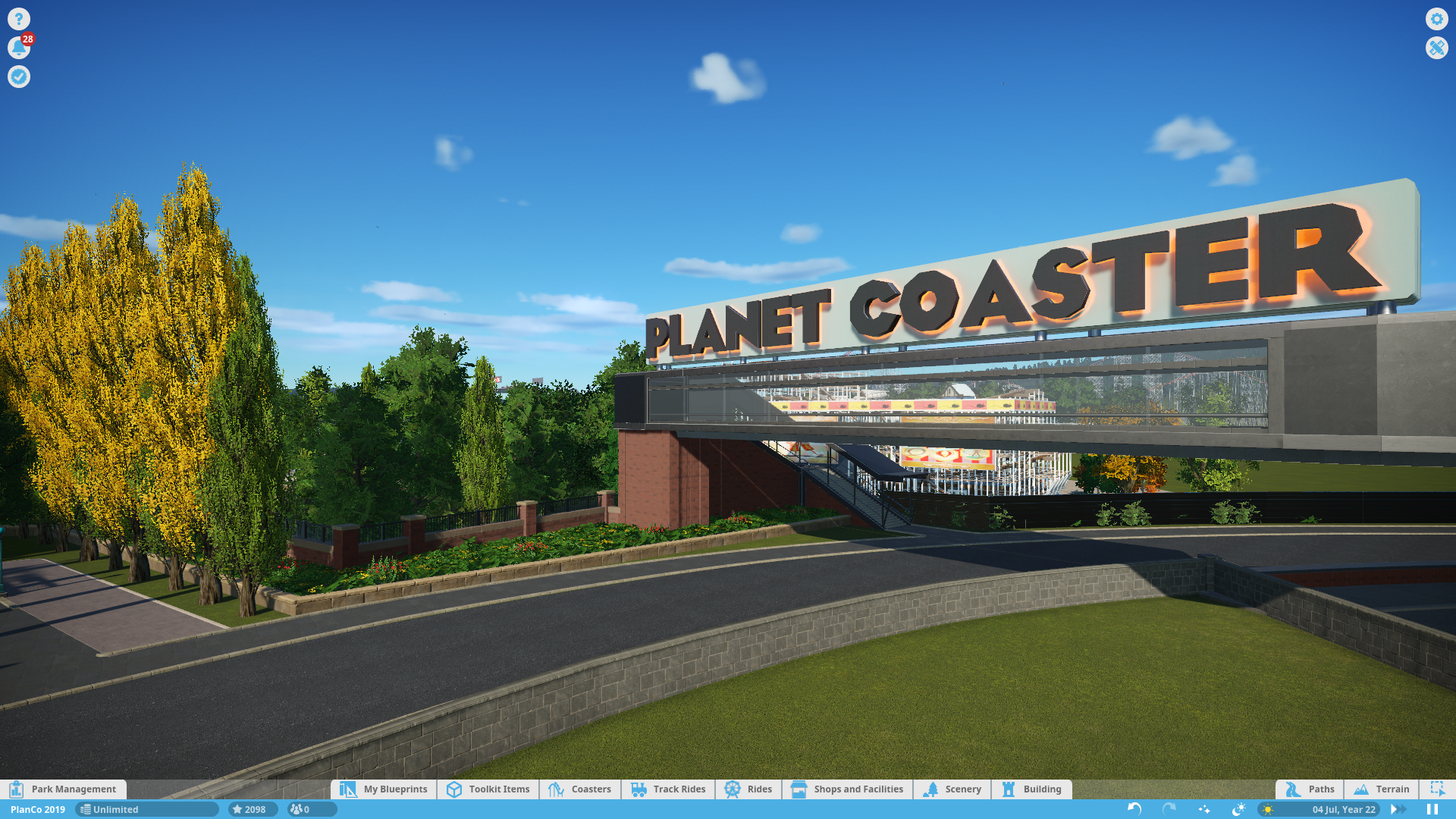 ^ This is a walkway bridge that links the bus terminal to the main entrance gates. 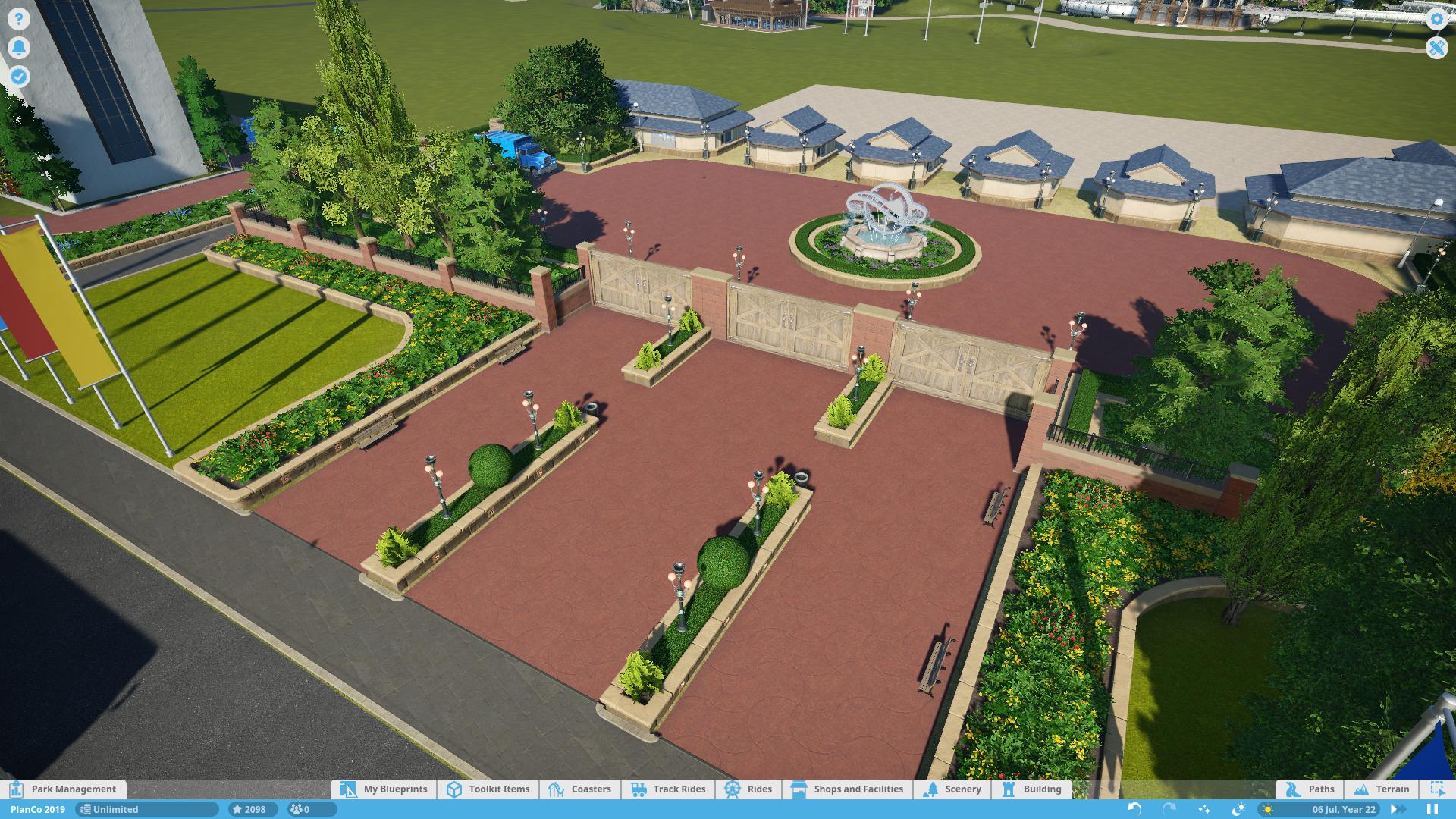 Far side of the park 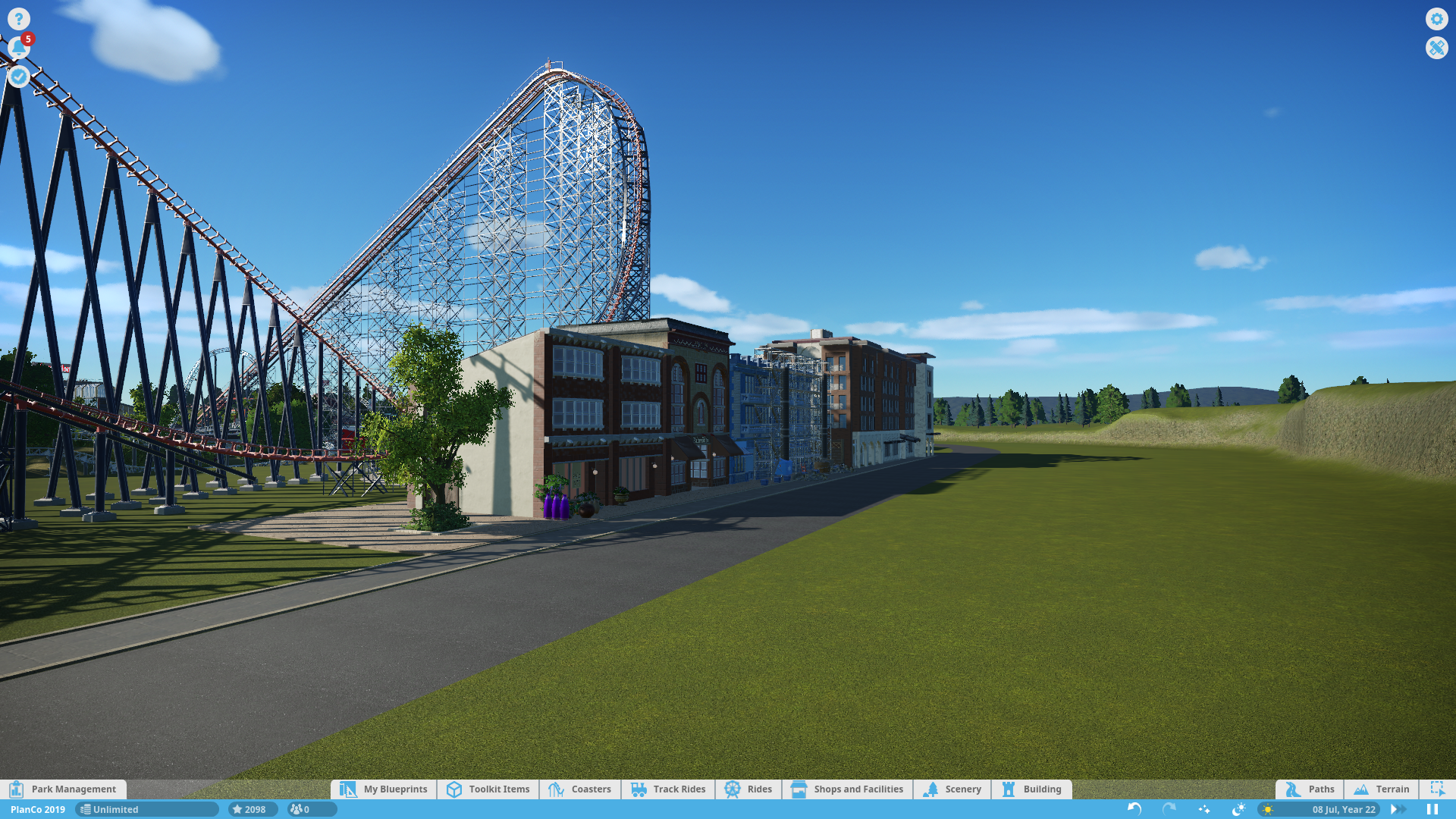 ^ This is right at the end of the park/map, opposite the main entrance. There is my favourite coaster, the Pepsi Max or "The Big One" as its now branded. You can see buildings in a row along the boundary road, this is to try and make it look like Blackpool Pleasure Beach. The buildings are just for show, no function or shops. Behind these buildings is a service area that has accommodation cabins, car park and service vehicles. 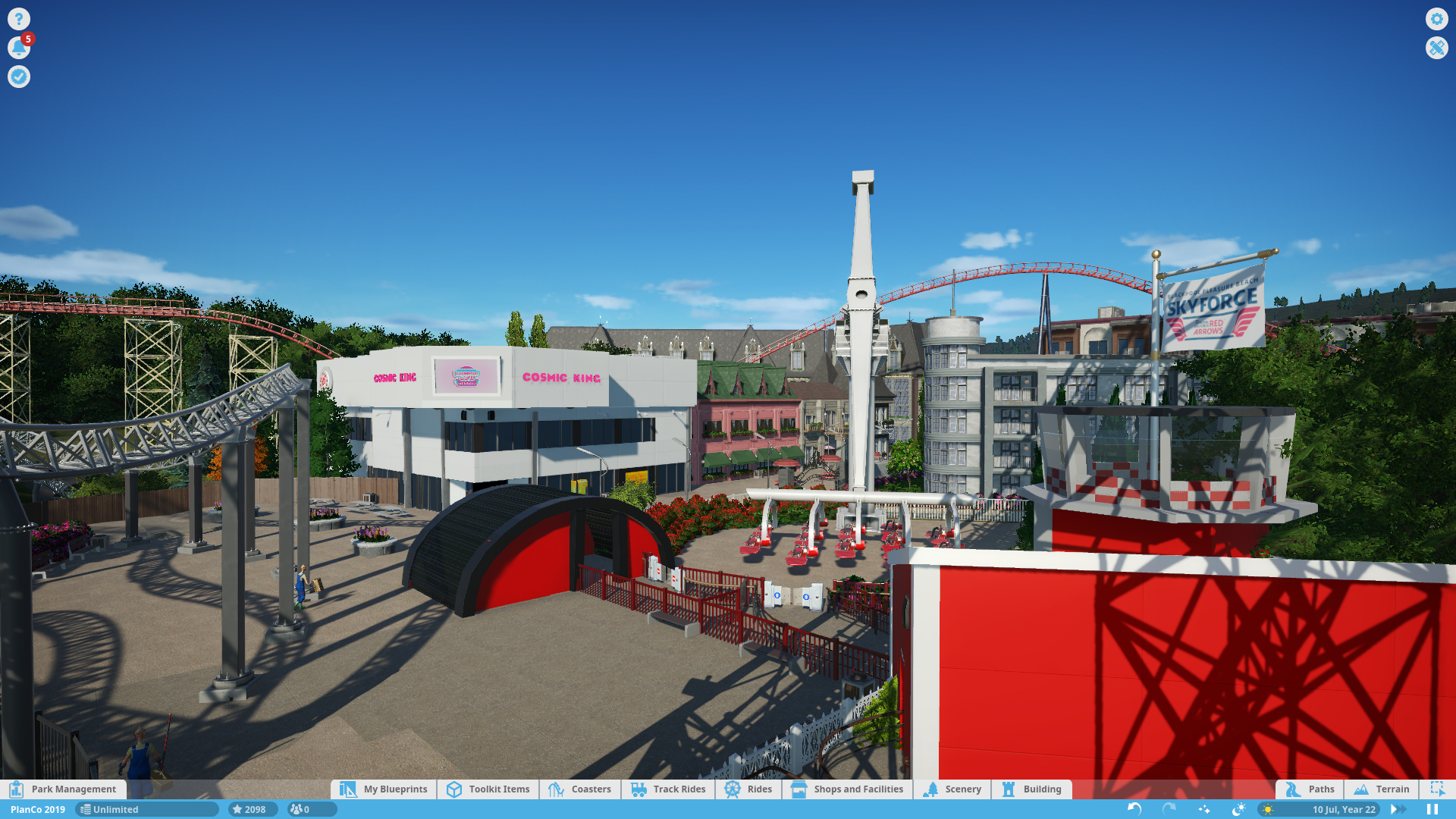 ^ The buildings in the distance are the ones pictured above at the boundary road. The one behind Cosmic King (Burger King in the real park) is a hotel. The others next to it are shops. You can also see the flat ride Skyforce hiding in the shadow of the Big One. 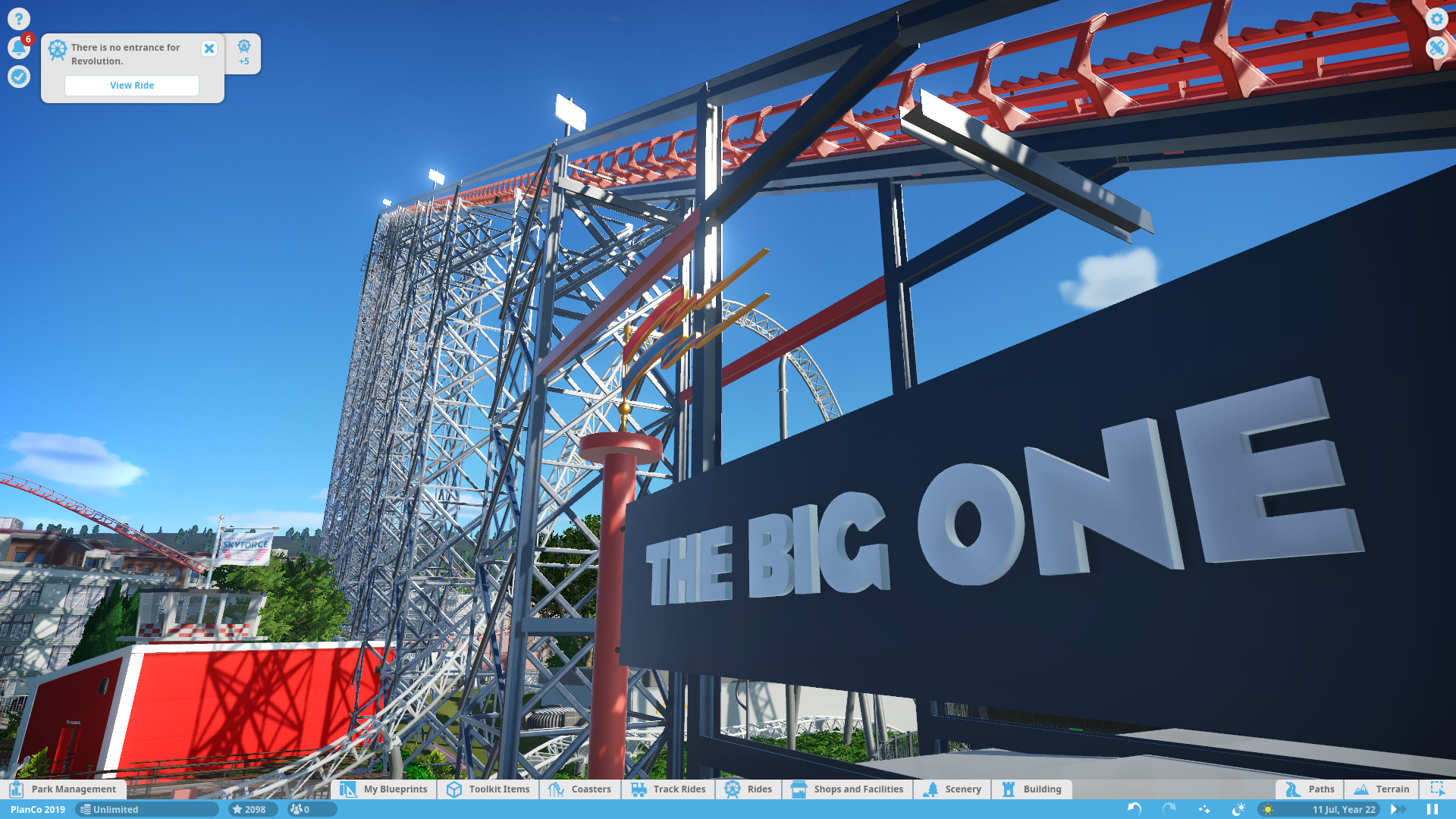 ^ Here is the entrance to the Big One. You can also see Icon, the newest ride at Blackpool weaving in between the Big One supports. 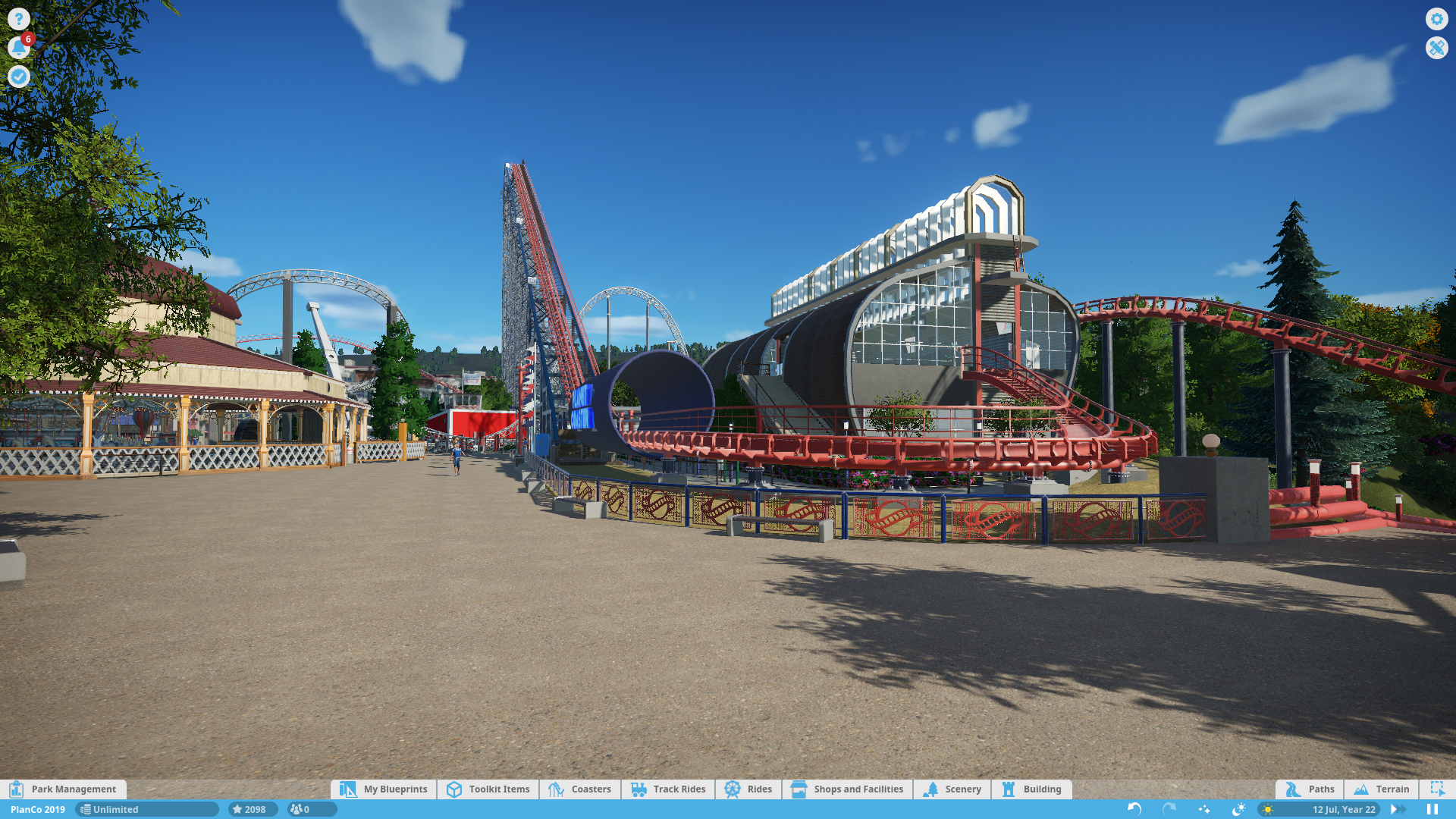 ^ This is the Big One station. Some of it was already made from a workshop creation, i added in the finishing touches. Using TMTK i found some tunnels to act as the giant Pepsi can that the train goes through on approach to the life hill. I also added some coloured fencing around the Big Ones station/queue line. To the left is the Grand carousel, just like in the real park. 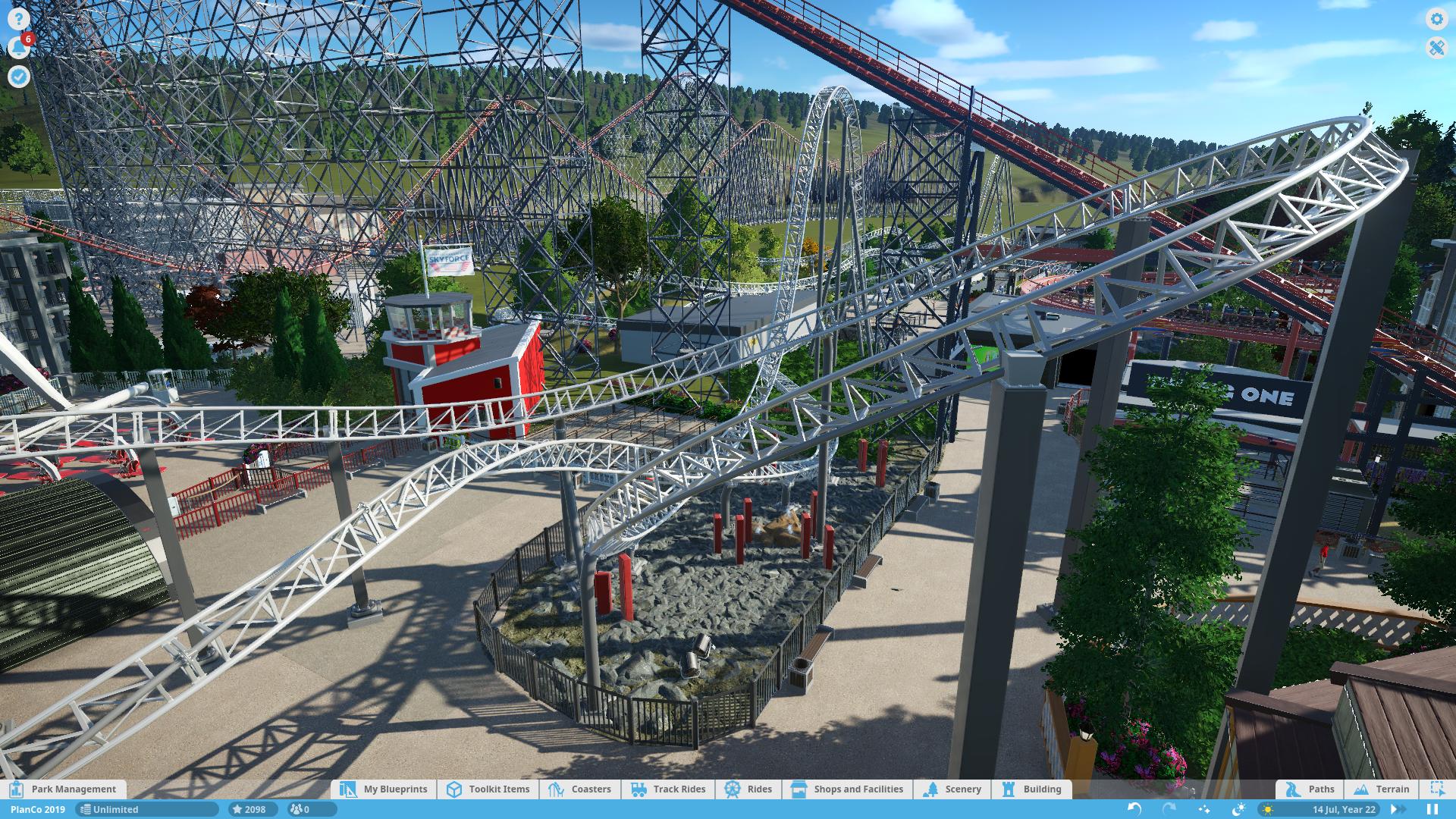 ^ Aerial view of Icon and the Big One entrance. 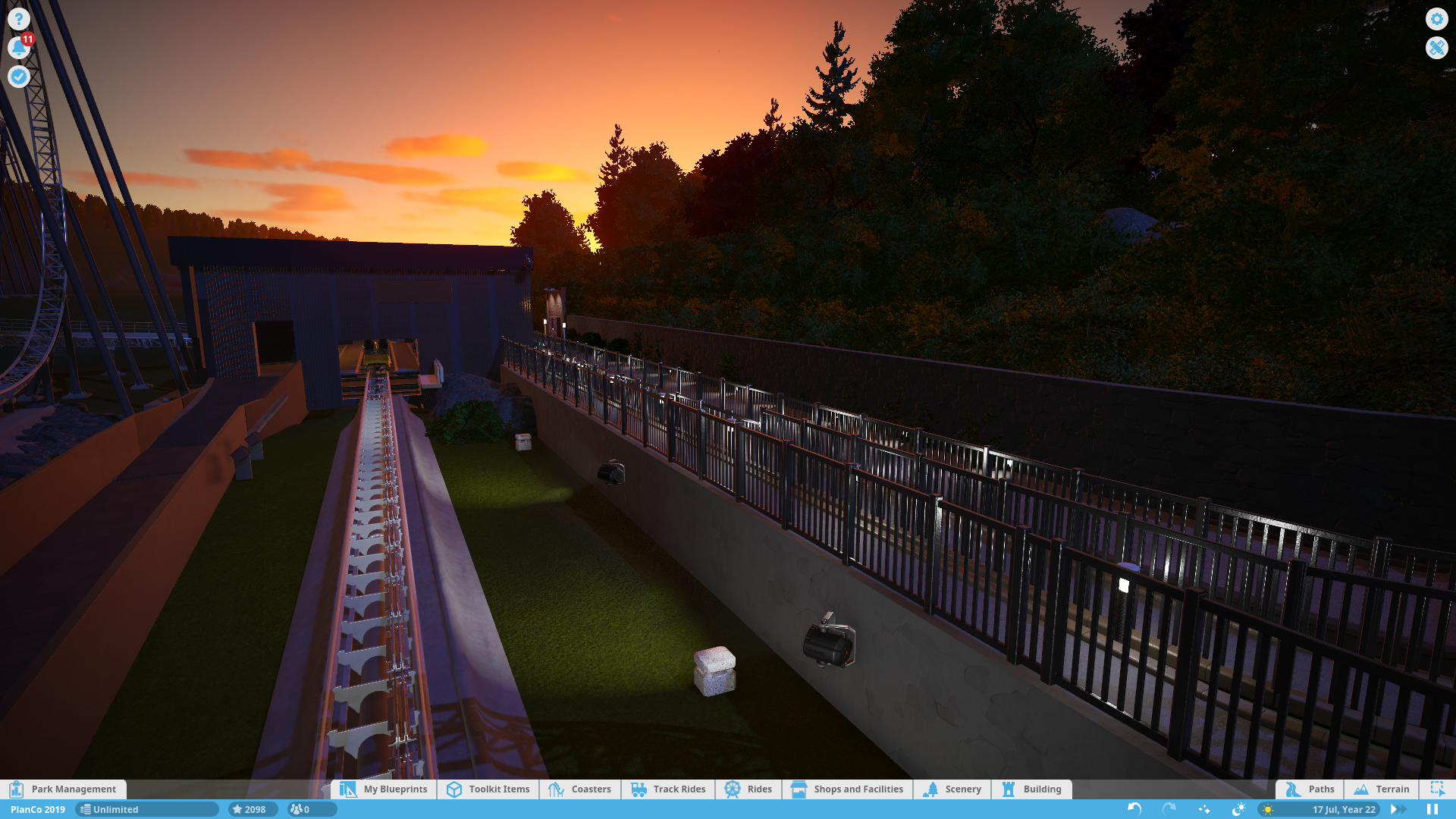 ^ Icons queue line. I've not screened the part before this which is the gift shop, i'll show it later on. 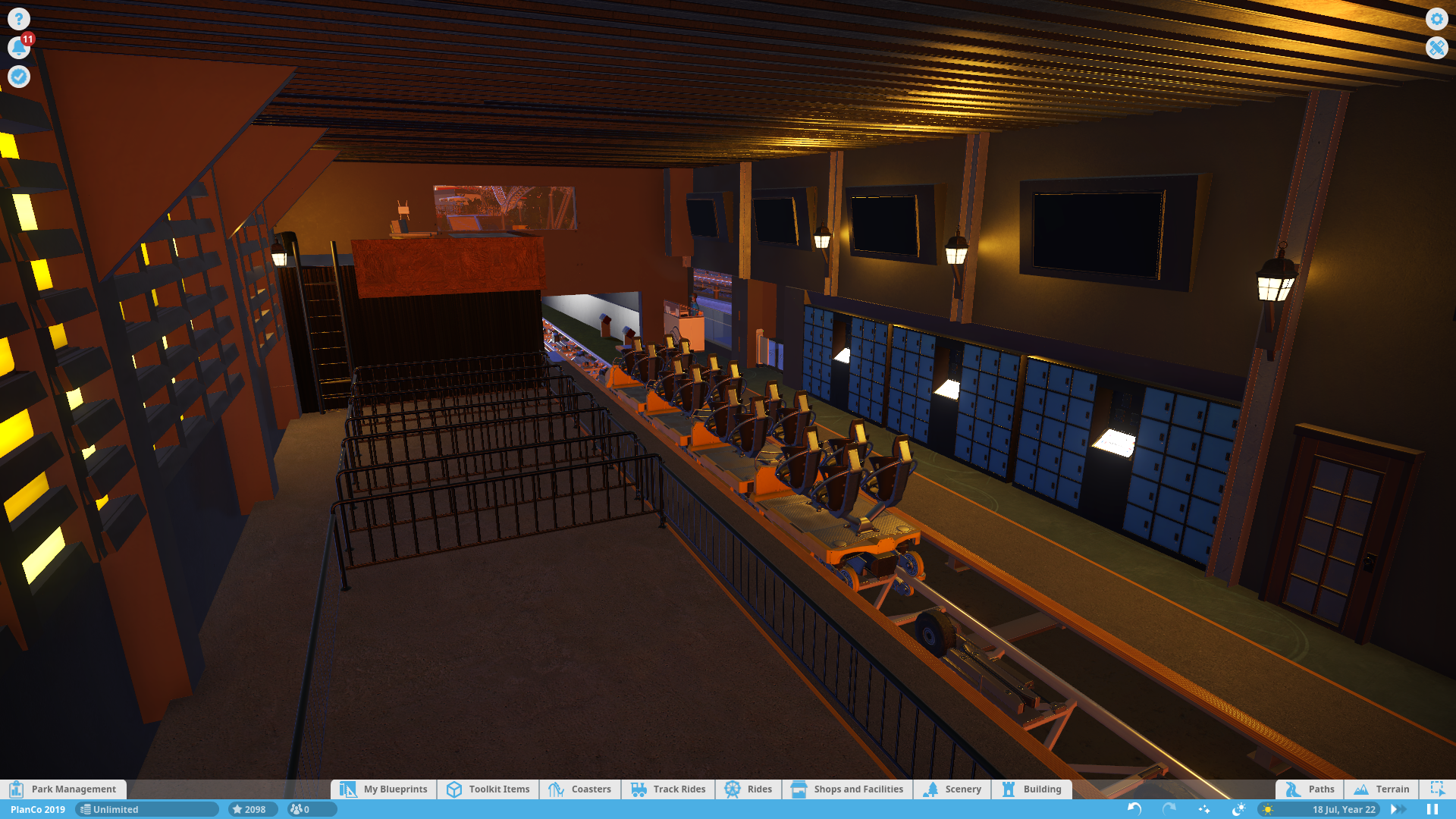 ^ Icon has a very decorated station with a tint of yellow background lighting. The real station uses giant mirrors on the walls, I've used TV Screens and added lockers where there would be in the real station too. 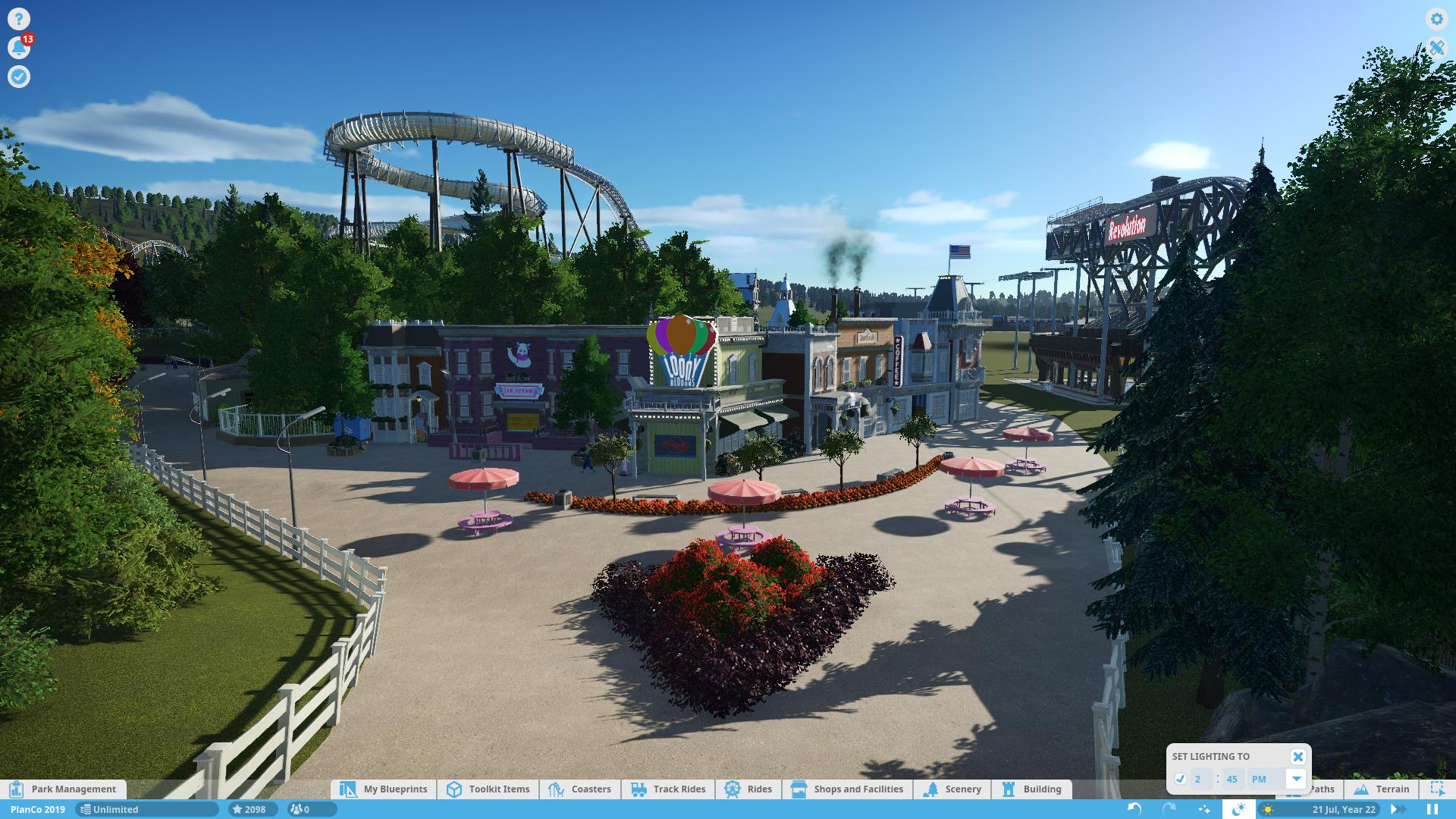 ^ This is Avalanche, or the area leading to it. Its a sort of main street area with shops, restaurants and facilities. If you had to walk to the left, you'd be at the Icon Gift Shop and Entrance, to the Right is avalanche and from where the camera took this shot is at edge of the Big One station. 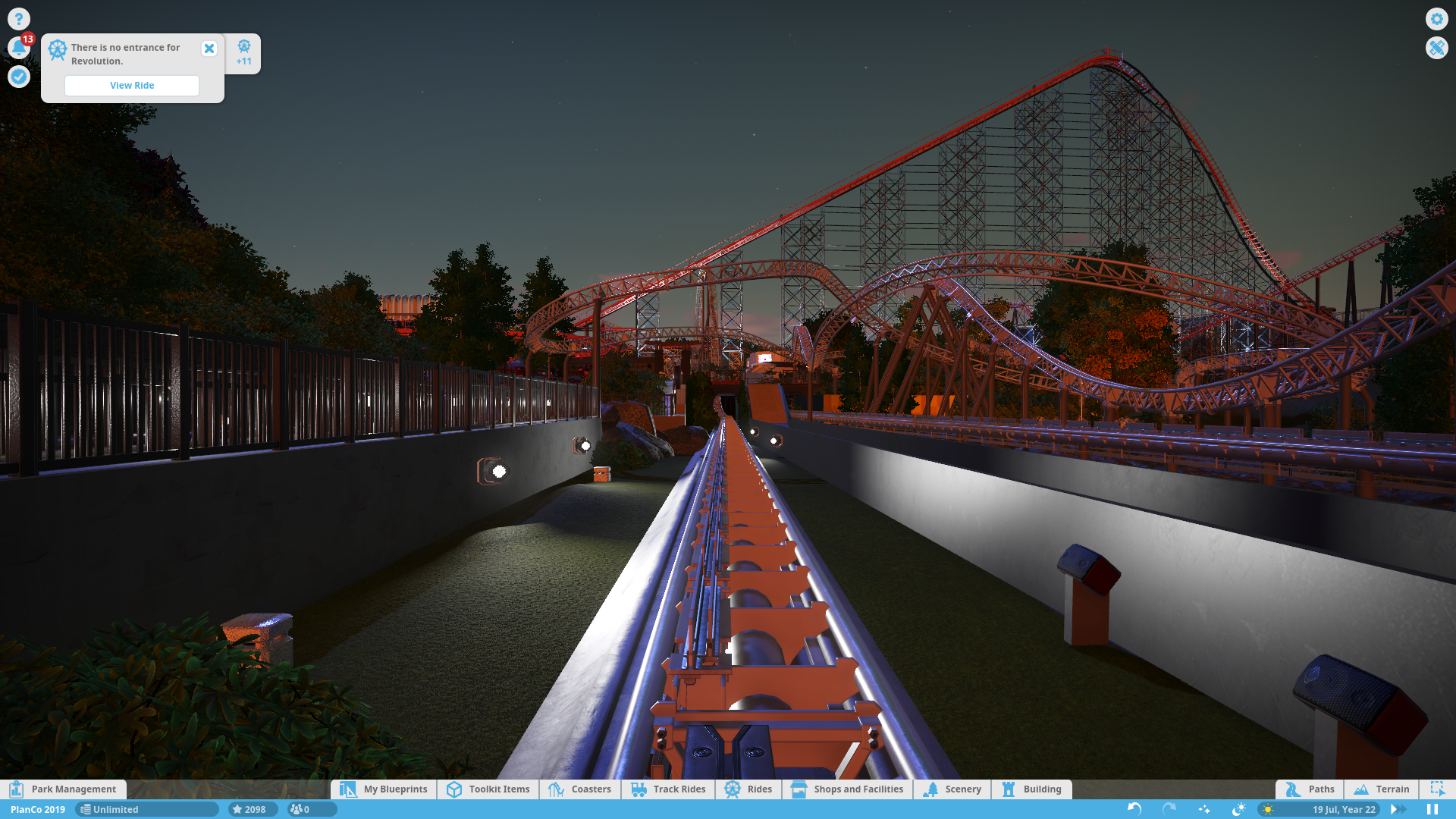 ^ Finally, heres a snap from the launch track of Icon, showing the Big One towering above.

I want this park to take a lifetime to build... The workshop has helped me really get started but as i expand in this park, I'm trying to create things myself as well as edit items that other people have made. My park is largely based on Blackpool Pleasure Beach, however, it's not a accurate recreation or even close. If anything many parts will be similar, but i like to play around and see what i can come up with. Currently I'm working on the Revolution, Avalanche and shops/flat rides in between them.

D
Can i get some credit for some of the specific buildings and scenery areas used? Recognize quite a bit of it from a recreation i did of Icon a while back..
But it looks like your projects coming along well.