Mjr Brownstains said:
IC 1502 is south of Alrai, it can't be it. the closest half bright star to the blue dot is HIP2794 at magnitude 8, the closest galaxy is UGC 481 at a low magnitude 16 and that's closer to HR240 than the blue dot.
I'd add pictures but it's getting very late here (1am). Is this FDevs "star of Bethlehem"?
Click to expand...

I'm using Stellarium to try and pin point it but I'm not seeing anything that close to HR 240 (HIP 4283) that makes sense.

Same on my screen Jaiotu, just a blue dot with no extended shape.
I've been using WorldWideTelescope and will add some pics when I find a free host site.

Certainly no galaxy of any great brightness exists in that area of sky in real life. Perhaps it is a Bethlehem star for us to follow but viewed from where? Sol, the Formadine rift, a guardian site? Or maybe the guy that created the skybox sneezed and accidently mouse clicked.
It's not the first time FDev got it wrong, M110 is on the wrong side of the Andromeda galaxy. 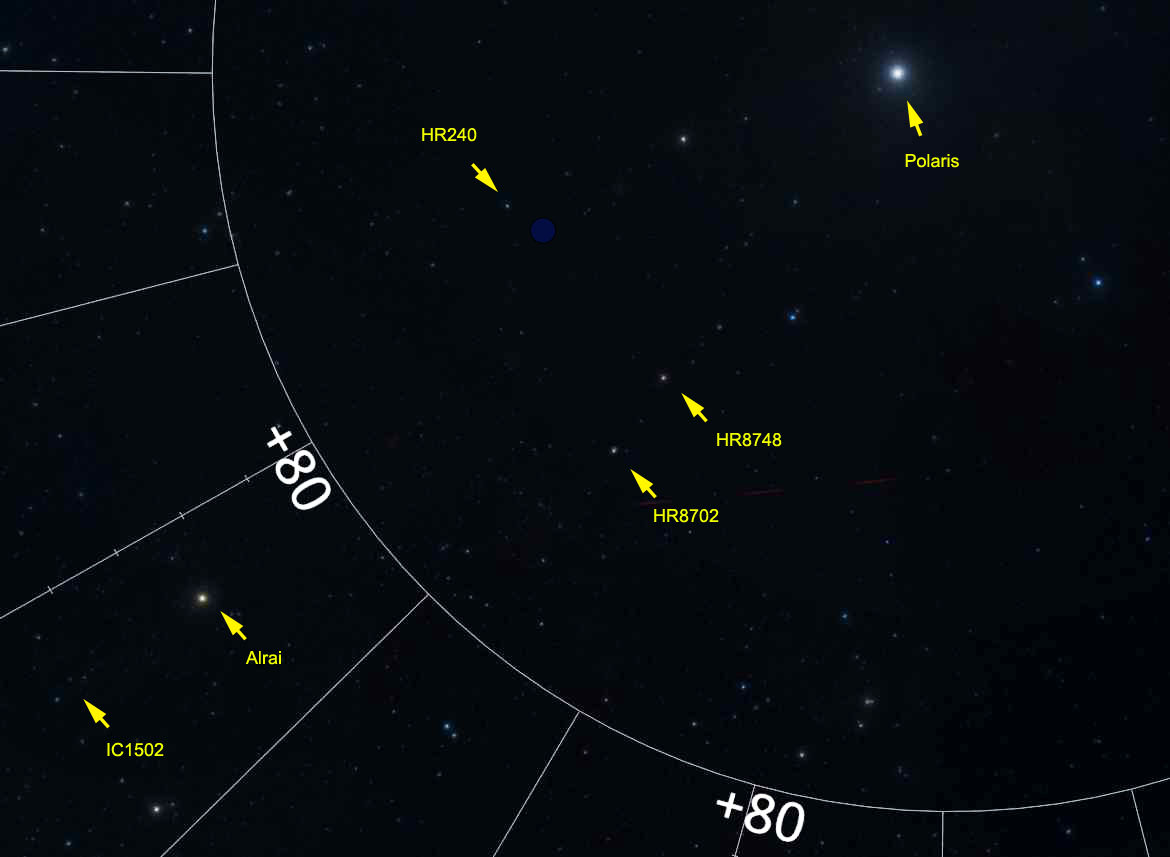 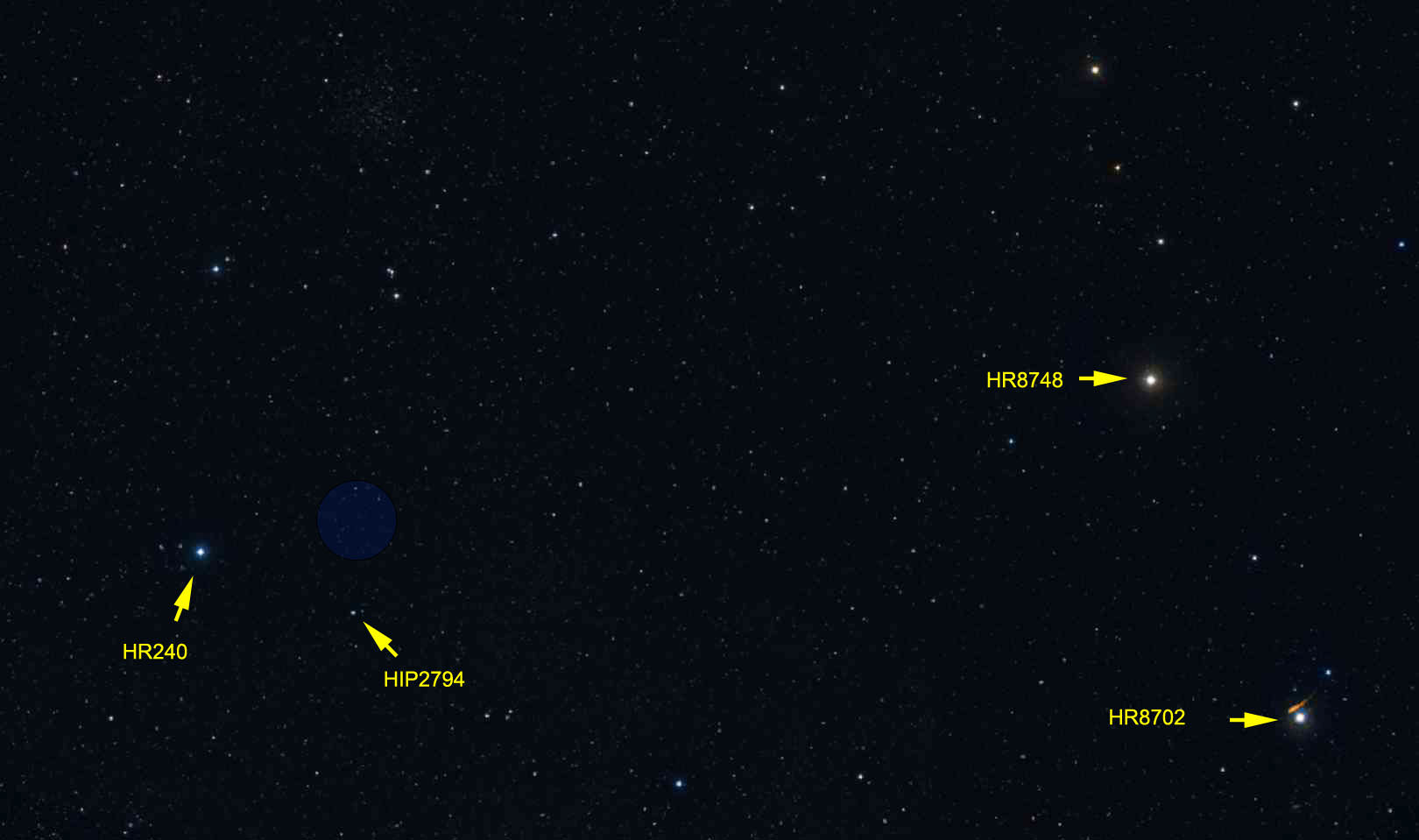 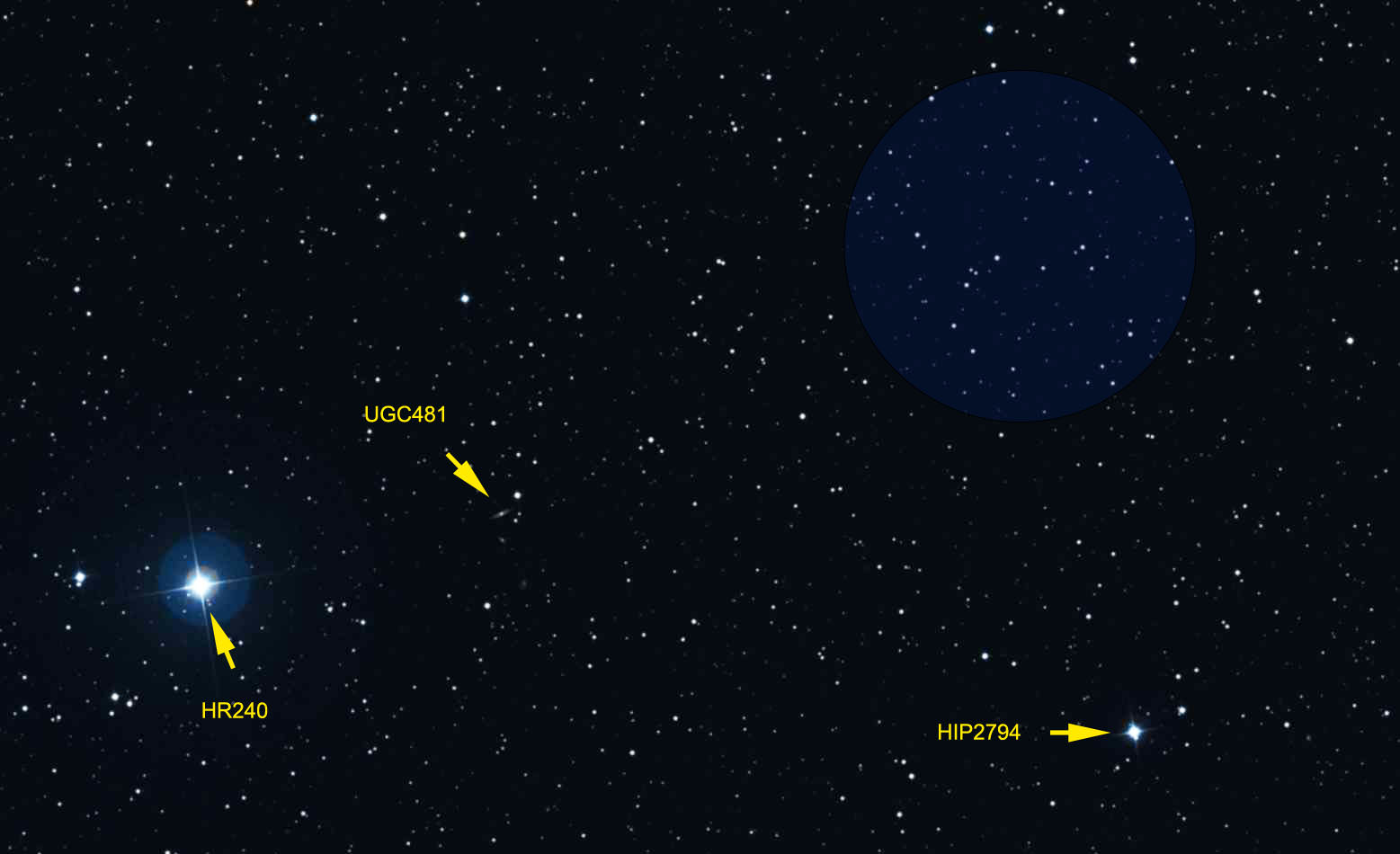 See if you get different results on the screen by making this modification to the GraphicsConfigurationOverride.xml file: https://forums.frontier.co.uk/showthread.php/413612-Blue-galaxy?p=6500608&viewfull=1#post6500608

Angles almost line up in the triangle, so I'm almost positive that the blue galaxy in the picture from SOL is same as the one taken from Systeasue BA-A e0

Macros Black said:
See if you get different results on the screen by making this modification to the GraphicsConfigurationOverride.xml file: https://forums.frontier.co.uk/showthread.php/413612-Blue-galaxy?p=6500608&viewfull=1#post6500608

Angles almost line up in the triangle, so I'm almost positive that the blue galaxy in the picture from SOL is same as the one taken from Systeasue BA-A e0https://i.imgur.com/10Rv4nn.png
Click to expand...

I'll have to try your graphics setting next time I'm in game.

I'm wondering if that's maybe a resizing algorithm artefact.
The galaxymap image would have several LOD sizes embedded in it with the maximum of 2048, by changing the setting to 4096 it's forced to resize introducing the extended object shape.

It might not neccesarily be blue per se, but blue-shifted as it is probably travelling away from the Milky Way.

Exeider said:
It might not neccesarily be blue per se, but blue-shifted as it is probably travelling away from the Milky Way.
Click to expand...

Tbh I've seen so many similar tiny nebulas around the galmap, looking just exactly like that and exactly with that shape. Mostly they werent really easily visible on the galmap without zooming in real close on the grid. Have you spend some time looking around that grid? Also you could, guessing you're in a big jumper ship, try to take a reference to that shape to something, for example those other galaxies or to the galactic plane, then travel vertically upwards/downwards or such for a couple hundered years and see if it stays relatively stationary to that referance or the distance between that and the referance increases/decrases. That might be a way to get an idea if it's some sort of an image on our skybox- I mean, some galaxy too far away to see it move or something that changes positions. That's all I could think of to help Im afraid.
Click to expand...

What we need from the Dev's instead of a new ship is an in-game purchase of a uber powerful Hubblesque space telescope and a way of accessing it from the GalMap....?
I do suppose though that if they became popular they would be a navigation hazard with them scattered everyhere!

M
I Googled "elite dangerous bright blue spot above galaxy" and am just floored that it produced something useful.
Thanks to everyone for letting me know what I've been fruitlessly chasing through the roof of the elysian shore
Last edited: Oct 12, 2019

Yeah, this blue spot becomes extremely visible at times. And once you see it, you can't unsee it. Glad that Google is bringing people to this thread now.
You must log in or register to reply here.
Share:
Facebook Twitter Reddit WhatsApp Email Link
Top Bottom