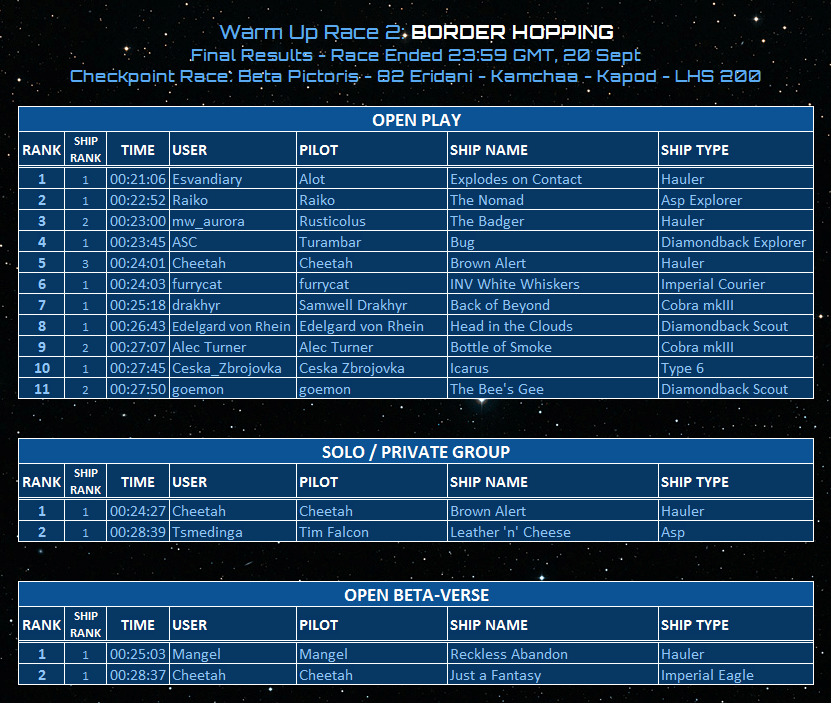 ​
Welcome to the second of the Buckyball Racing Club's Warm Up Races, a series of short races planned to be simple and quick, and give you a good taster of Buckyball-style racing!

This is a fairly simple jaunt, hopping across the borders between the Empire and Federation, and between the territory of four Powers...

Start line is at Gaiman Dock in Beta Pictoris.

Then call at the following four starports, in any order:
Finish line is back at Gaiman Dock in Beta Pictoris.

To aid in route plotting, here's a list of the stations, the distance of each from its respective star, and the distances between the systems in light years.

Entries can be made in any ship (all five waypoints are full size starports), and at any time. The race closes at 23:59 GMT on 20 September 3301; you must cross the finish line no later than 23:59:59 on 20 September for your entry to count.

For this race, there are three classes of entry available:

For guidance on what to capture on screenshots, see the How to Enter page of the Buckyball Racing Club website.
Last edited: Sep 22, 2015

What happened to the times?

Actual times will be revealed for the last day of the race.

The sight of your name at the top of the leaderboard, and the opportunity to say you won a Buckyball Race.
Oh, and depending upon how Ceska's feeling, possibly the chance to get your very own mention on Radio Sidewinder

What's to stop me cheating?

Nothing. Like the Buckyball Runs, we operate on an honour basis here. There's nothing I can do to stop you from faking screenshots or using exploits. But where's the benefit in that? It wouldn't get you anything, except a lasting feeling of shame. This is all about doing the race for the fun of it.

How come you've entered your own race? Isn't that cheating?

My entry was set before the race started, to give an idea of times. And it certainly shouldn't be the fastest run, given that it was set in a Cobra still fully equipped with weapons, shields, etc...

Time waits for no-one, and neither does the race clock. It's all part of the race.

I'm not sure when I'll be making a run, but I certainly will be.

I'm glad that you remembered to hide the race times, I totally forgot about that until about the third day of my race, and then it was too late. Cya all at Gaiman Dock!

I guess I should start heading back to civilization...

thanks for setting this up!

I've been doing a few plots and practice runs in beta. There's a bit of hidden complexity to this race. I like it.

The INV White Whiskers will be blasting off for an official attempt shortly. And, after the first day... we have an entry!

OK, so it's only the one entry, but it's a start, so I can't complain . As promised, Cmdr furrycat's Imperial Courier INV White Whiskers did indeed make a successful attempt. The practice runs in beta seem to have paid off, as furrycat's first attempt duly blew past my Cobra to take top spot on the leaderboard. Well done furrycat!

Now, where are the rest of you?

A
Ooh, another race. I'll be having a go shortly.

Edit: Well, that didn't go so well. First I bounced off the wall trying to come out of Mikulin Hub and then at the end, literally 1 or 2 seconds before arriving back at Gaiman Dock, I was interdicted by a bloody eagle.
Last edited: Sep 13, 2015

Oooh, interesting... Not going to lie, I think furrycat's chosen very well on the ship front!
... but I'm a BBR6 veteran, so I'm going to do it in a Hauler regardless.

what?! a courier beeting a cobra in speed? did you transfer shieldmj to kinetic energy, furrycats? grats

... i would so much love to race tonight, but i have rare goods in my rack, which i need to give to a fellow commanders some time tomorrow. even worse those racks are in a bubble-specced multipurpose asp ... NEED FOR SPEED!

goemon said:
what?! a courier beeting a cobra in speed?
Click to expand...


drakhyr said:
My entry was set before the race started, to give an idea of times. And it certainly shouldn't be the fastest run, given that it was set in a Cobra still fully equipped with weapons, shields, etc...
Click to expand...

ASC said:
Edit: Well, that didn't go so well. First I bounced off the wall trying to come out of Mikulin Hub and then at the end, literally 1 or 2 seconds before arriving back at Gaiman Dock, I was interdicted by a bloody eagle.
Click to expand...

I feel your pain... Relatively good first run, then interdicted 4Ls from Gaiman Dock. Should still be a decent enough time, and a couple of fun GIFs incoming soon...

So I haven't flown a Hauler in a while...

arrived in gaiman dock in my the sweet little dbs "The Bee's Gee", after some final outfitting in ohm city (ohm city and borr city are the two li yong rui controlled hightech systems close by). now shower, the emperors favourite coffee, and a handrolled rusani old smokey cigarette, before i take off.

i'm back. got interdicted, but most of the precious time i lost was due flying to kamchA istead of kamchAA...

well, i will try later this week.

... a customer called, in need for a shinbuto delivery, till DAWN... o/ Cmdr goemon's improved time in the Diamondback Scout The Bee's Gee managed to secure a creditable fourth place overall. While I appreciate the assistance in holding up the rest of the board, I suspect that goemon won't be content with that and will improve further as the week progresses.

I didn't add any comments when I updated the board yesterday, but, well, Alot posted a time. Those of you who've been here before won't be surprised to see his position on the board .

drakhyr said:
I didn't add any comments when I updated the board yesterday, but, well, Alot posted a time. Those of you who've been here before won't be surprised to see his position on the board .
Click to expand...

Bah... I still say a Courier can beat me.

(C'mon furrycat! I believe in you )

E
Thanks for organising this race, Cmdr Drakhyr! I've done three runs this evening and have just submitted the details of the best of them. I was flying my racing Cobra, the Null Geodesic, but have not done the fast docking and undocking this race demands before, so I might try again later in the week (maybe I'll also try it with my Diamondback Scout).
There are conflict zones in two of the systems as a result of minor factions having a civil war: Beta Pictoris and 82 Eridani. Be particularly careful about interdictions in those systems! I also had to throw off an interdiction attempt in Kamchaa as I was approaching the station on my first attempt, so the others are not completely safe, either. Take care out there!

Esvandiary said:
Bah... I still say a Courier can beat me.
Click to expand...

I thought I had you beat this time. Then I joined the interdicted on the final stretch club.