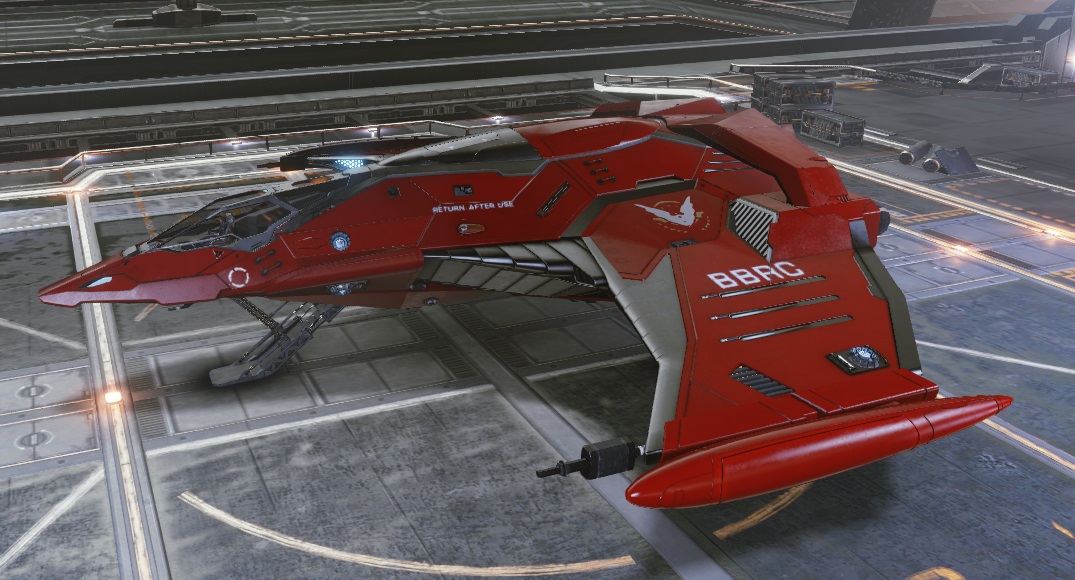 Regulation Eagle will be submitting a fair rather than good time shortly, but it is a valid entry at least.

This morning's run was almost perfect. Shaved almost a minute off my previous attempt at Cherry Dock, and continued to improve my time after that, despite a bit of a fumbled landing at Bradford Station. There was an incident (at 18:57) on my way to see Spock, one that I had hoped would add a new character to the Stevenson Mythos, but sadly they weren't even remotely same individual.

You can watch me fail to fail badly in about twenty minutes here:

Run submitted, not great but at least I beat that dammed 32 minute barrier.

Just ran the Eagle again and blow me faster again, saved nearly 2 minutes today by paying attention. Will post that tomorrow now though.

New scoreboard, full times revealed, only three days of racing left Buckyballers, get out there and GET FAST! o7 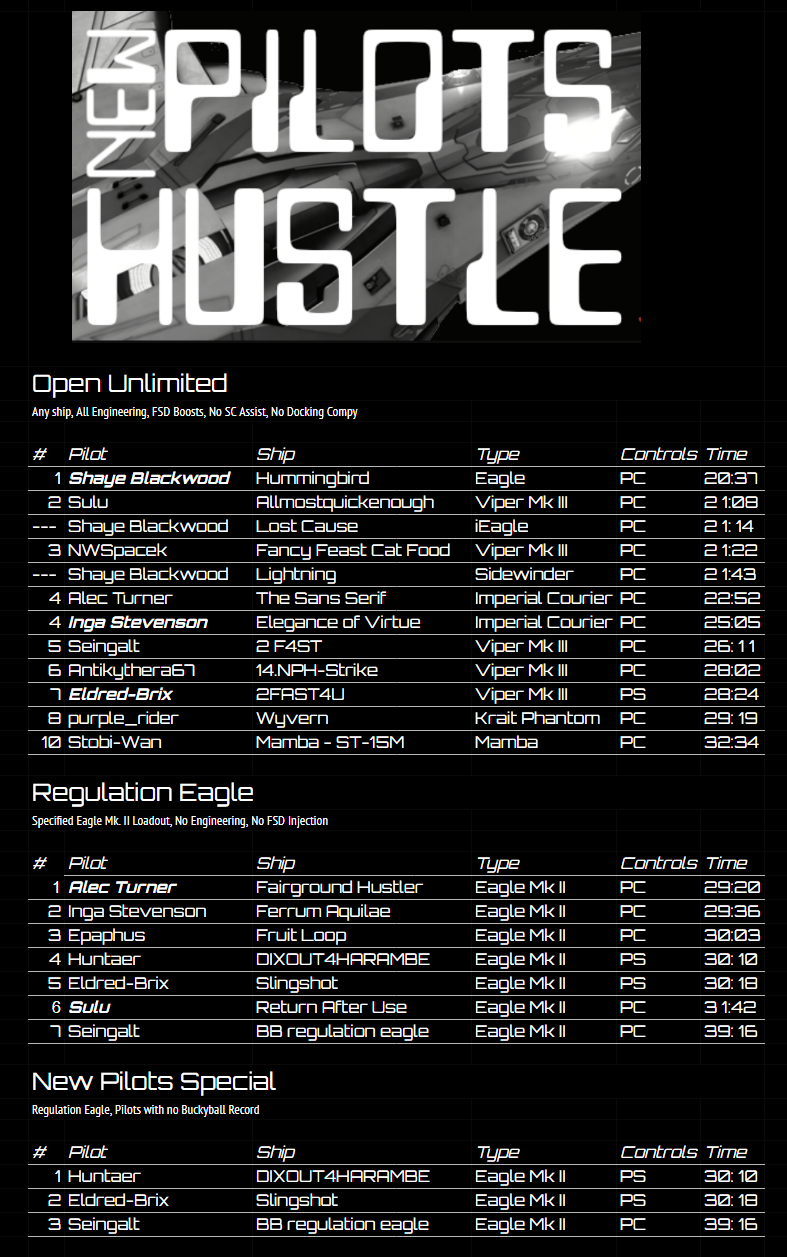 
Starting off the course this time we saw Seingalt in the…ahem…the “BB Regulation Eagle.” It appears their disdain for their ship is so deep it doesn’t even deserve a name. That’s quite a shame. This even bled through to their endorsement quote for Dynamic Shields, and I quote, “Light and reliable, certainly the best brakes for racing intensive use!” Brakes? Brakes?! Well, that actually is a long Buckyball tradition, welcome to the ranks of lithobrakers Seingalt! Apparently using Melia 6 as a brake did not work as well though, but in spite of a collision with the trickily located gas giant on the return ot Whitson Pub… Hub… oh cmon we know where all the racers go, don’t we? Seingalt still managed to keep it under the big four-oh.

Next up came Eldred-Brix, a new racer to these parts, but apparently a very dedicated one. He left a gracious review of Dynamic Shielding: “5/5☆ Will buy again. Considering my recent string violent & abrupt landings, your product has insured my hull remain intact. Keep up the good work. O7” They served his regulation run well, and put him at the top as a speedy 31 minutes!

Alec Turner is a name well known around Buckyball pubs, and almost as famous is his small ship of choice, The Sans Serif. Well known for it’s speed and agility across the Bubble, it was more than a little too fast for Alec on final approach, and I swear the glasses across Whitson’s Pub jostled when he did a flip against the back of the station. Better landings soon CMDR! You’ll get to 21 minutes yet.

In case anyone did not notice in the submission form, there is a place for you to put your Terran (earth) address. If you do this before Monday (if you left it blank and don't have another submission, just make a blank submission filled with zeros but WITH the correct commander name), you will receive a Commemorative Buckyball Participation Magnet, Sticker, AND Beer Mat (as found at Rebuy Prospect in Fullerene C60 https://elite-dangerous.fandom.com/wiki/Bucky_Ball_Beer_Mats ) sent to you via USPS mail. Images follow. These items are only available (for FREE) to pilots who have completed and submitted a race entry. 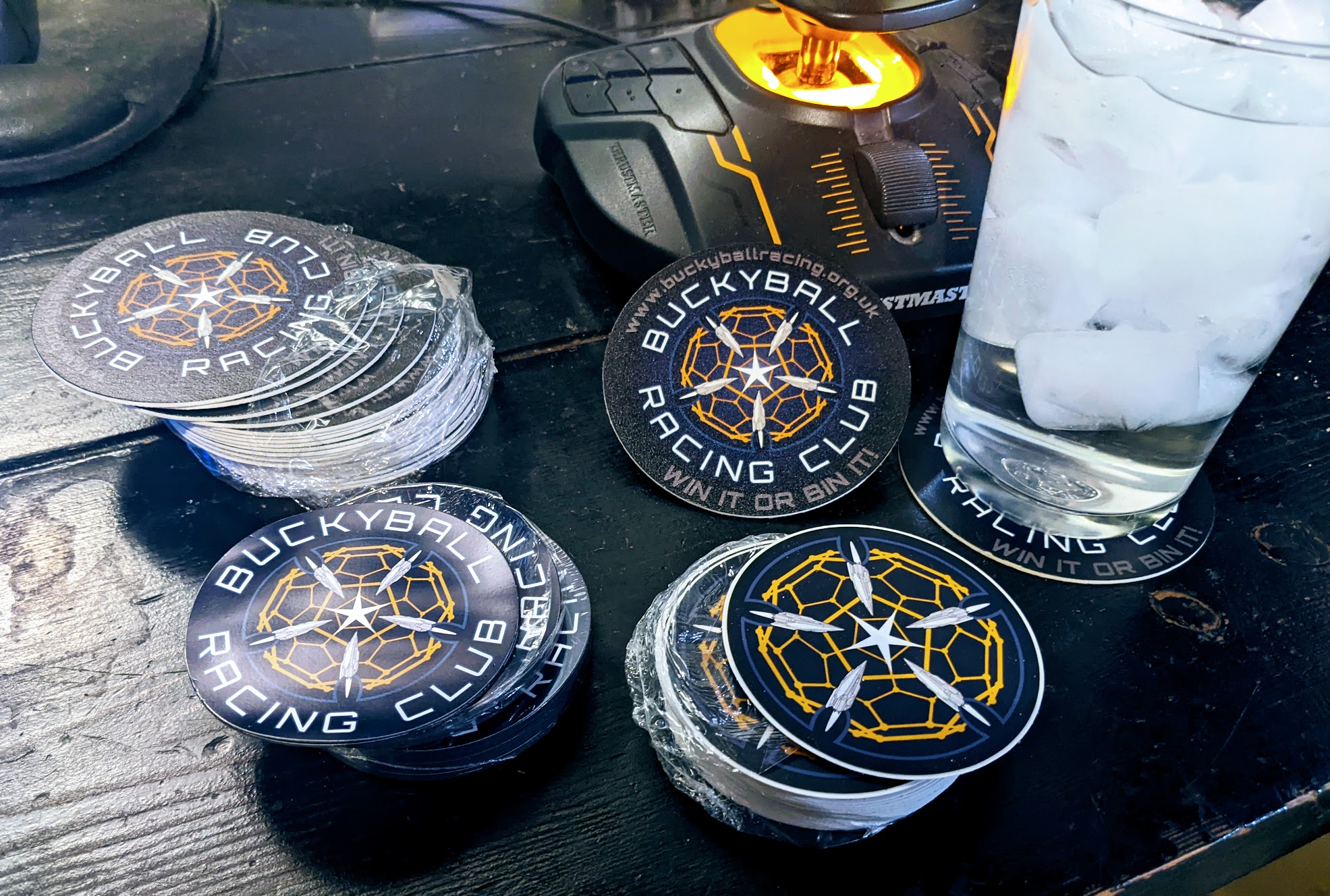 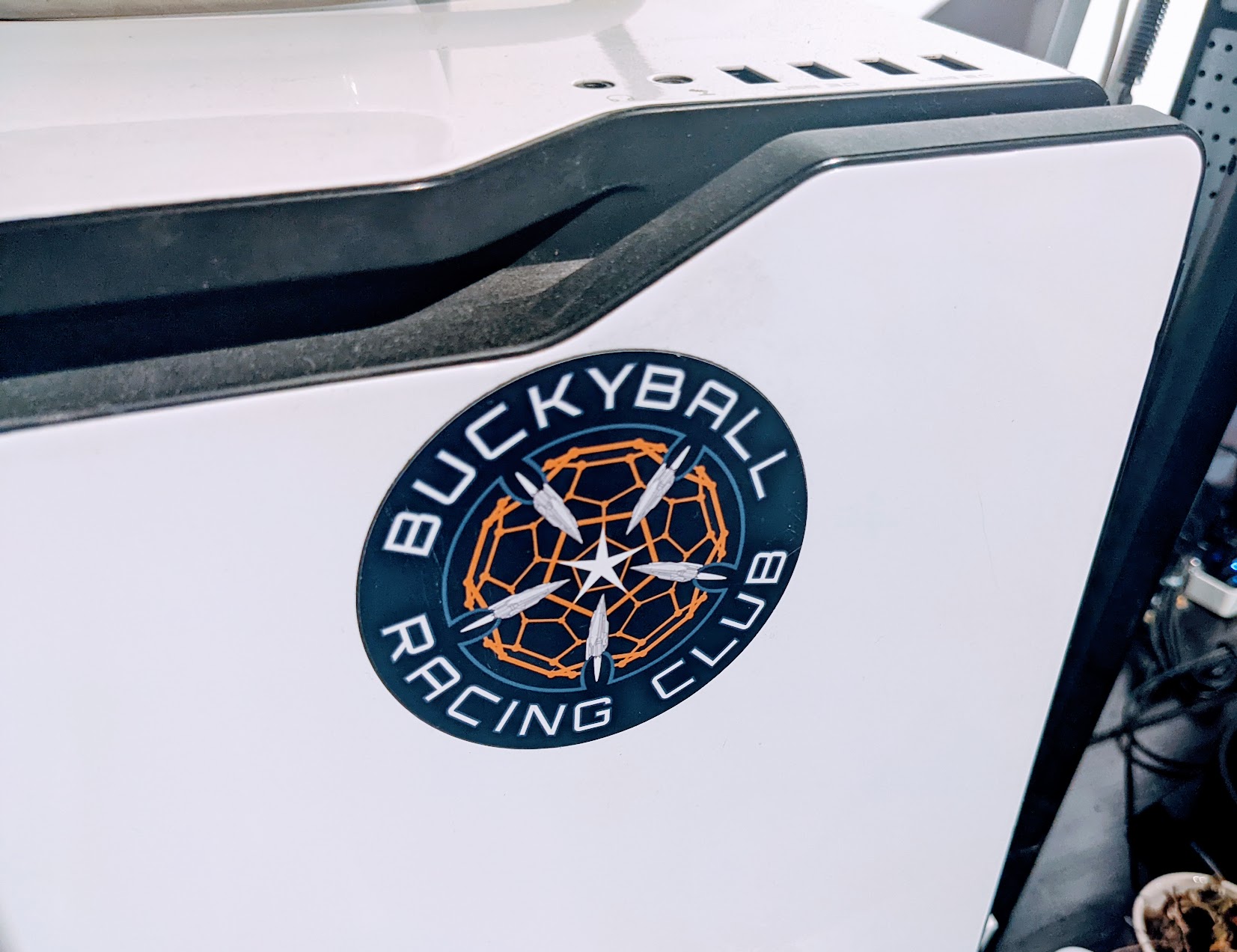 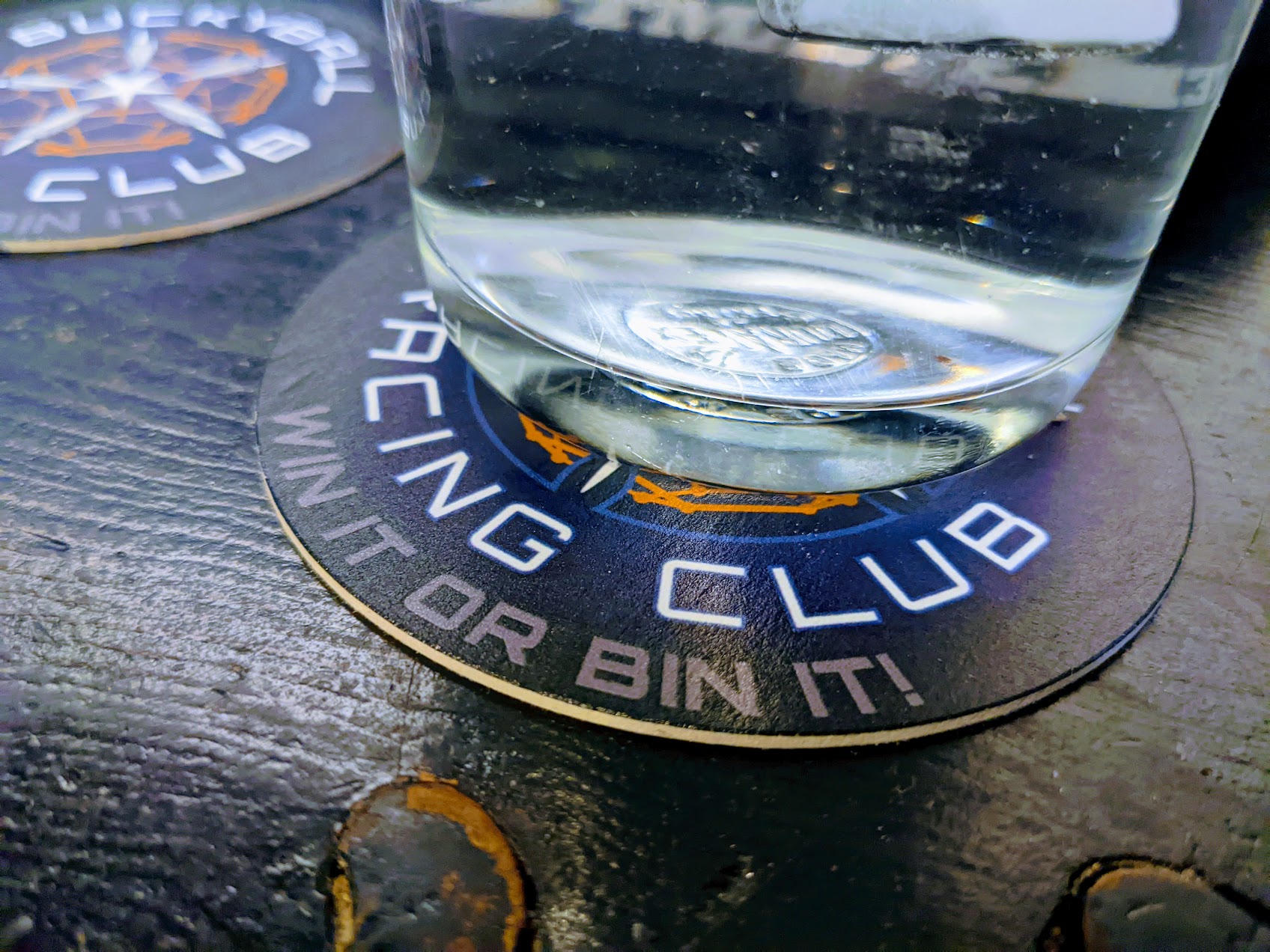 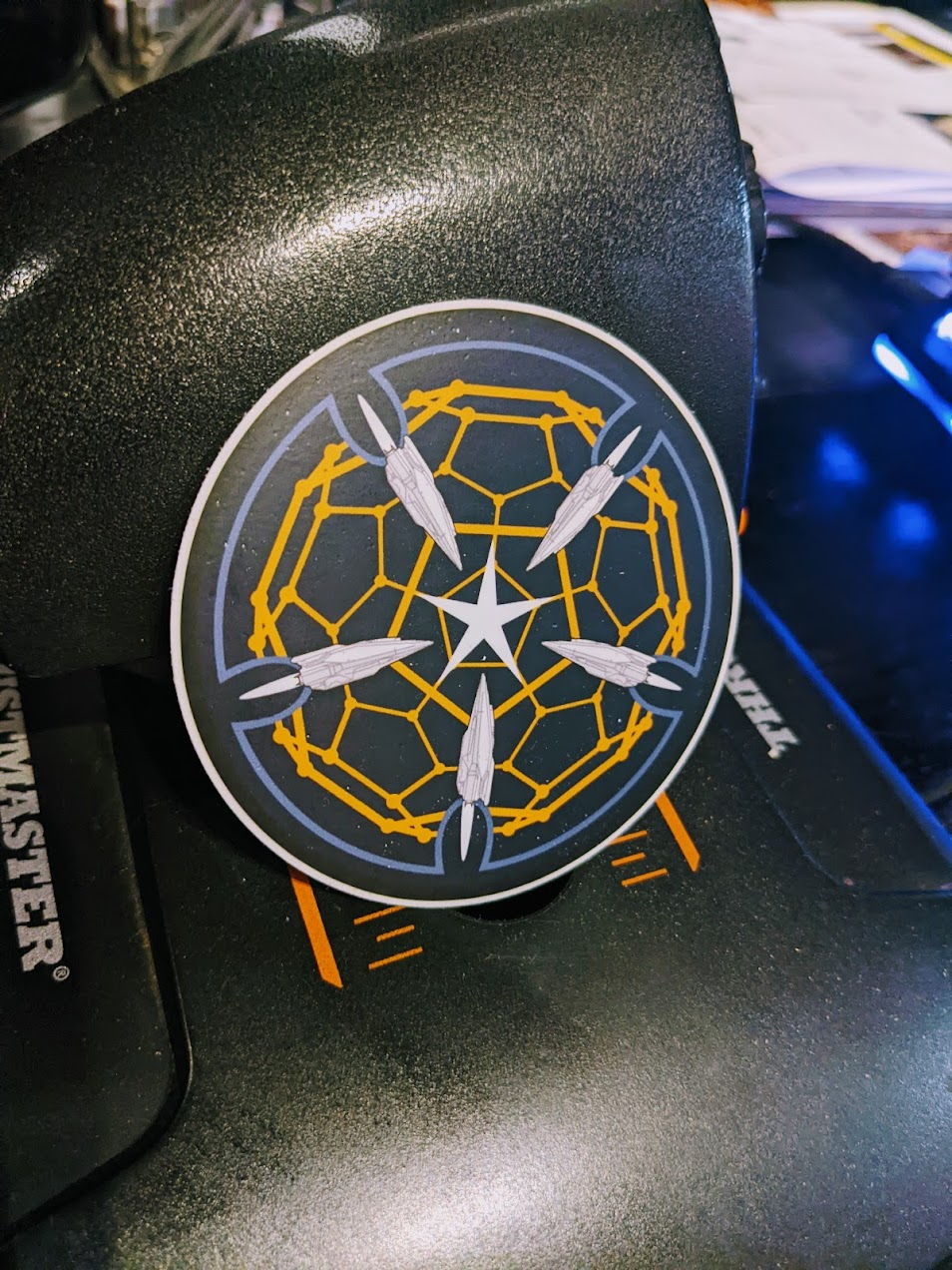 @Bruski I do believe I should be 5th in Open Unlimited, not tied for fourth, given the over two minute gap between me and @Alec Turner.

Speaking of which… a 16 second gap between us in the Regulation Eagle??? Challenge Accepted!


Darkfyre99 said:
There was an incident (at 18:57) on my way to see Spock, one that I had hoped would add a new character to the Stevenson Mythos, but sadly they weren't even remotely same individual.
Click to expand...

You know what, I’m going to ignore this little fact. I need to get this little fic-let out of my head and share it with you lot!

I really want sub 20 but I am not sure it is even possible. Who knows though?

Darkfyre99 said:
Speaking of which… a 16 second gap between us in the Regulation Eagle??? Challenge Accepted!
Click to expand...

Uh oh ... think I'm gonna leave Unlimited for Shaye and Sulu to duke it out and focus on fighting to keep my Regulation spot.

I got just over 30 in regulation now as well

I have spotted a flaw in my racing which may help me "a little" but tbh Shaye`s time is frankly astonishing and even though I am in second place I am in a bit of awe at his time.

Fish172 said:
Shaye`s time is frankly astonishing and even though I am in second place I am in a bit of awe at his time.
Click to expand...

It's a bit long but I almost wonder if that should have been the new motto around the latest batch of Buckyball Beer Mats!

Darkfyre99 said:
@Bruski I do believe I should be 5th in Open Unlimited, not tied for fourth, given the over two minute gap between me and @Alec Turner.

Speaking of which… a 16 second gap between us in the Regulation Eagle??? Challenge Accepted!


You know what, I’m going to ignore this little fact. I need to get this little fic-let out of my head and share it with you lot!
Click to expand...

That is correct! I apparently can't count and will fix that this evening.

Alec Turner said:
It's a bit long but I almost wonder if that should have been the new motto around the latest batch of Buckyball Beer Mats!
Click to expand...

A decent idea, but I think the next batch of beer mats will have to be a Khaaaaaaan image

I have an answer about the 20 minutes...it can be beaten I have just managed a 19.36 but unfortunately there is an issue with the video that means I may not be able to use it. But now I know it can be done. Confirmed I managed to stop the recording for 20 seconds and missed the loop/dock at Nimoy. Oh well back to it.
Last edited: Jan 14, 2022

Fish172 said:
I have an answer about the 20 minutes...it can be beaten I have just managed a 19.36 but unfortunately there is an issue with the video that means I may not be able to use it. But now I know it can be done. Confirmed I managed to stop the recording for 20 seconds and missed the loop/dock at Nimoy. Oh well back to it.
Click to expand...

I was pretty pleased I'd done a sub 20 minute run. Oh yes, that is until I realised I'd missed a station out

Another attempt tonight and I doubt I will be able to fit more in this week end....
Unofficial because voice attack didn't manage to capture on of the dockings (OBS makes the game stuter and it's awfull). 32:31 in a regulation eagle with still plenty of mistakes so that means plenty of room for improvement.

The highlights of my run : (and a great collision missed, once again because of voice attack not getting it) 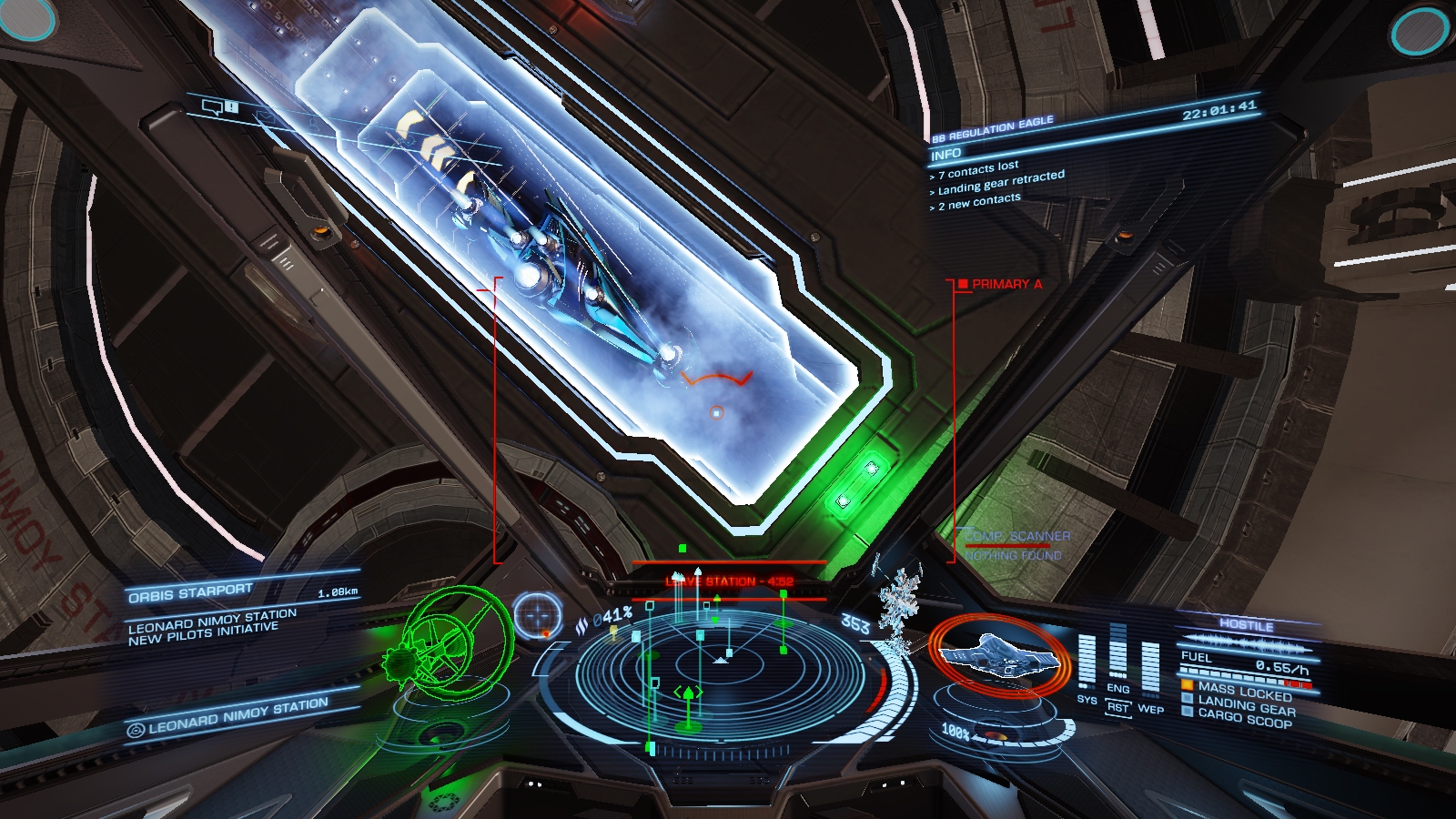 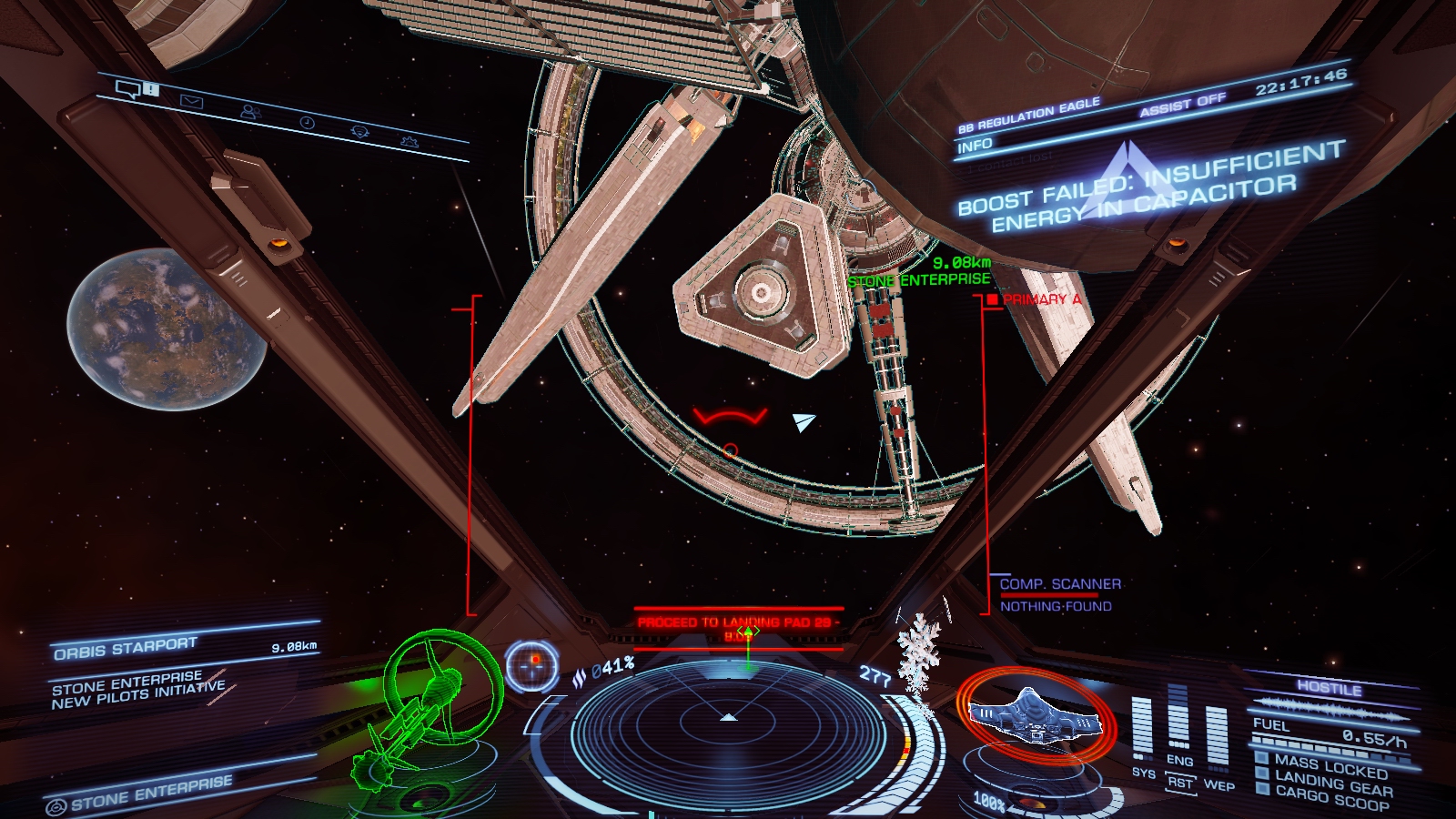 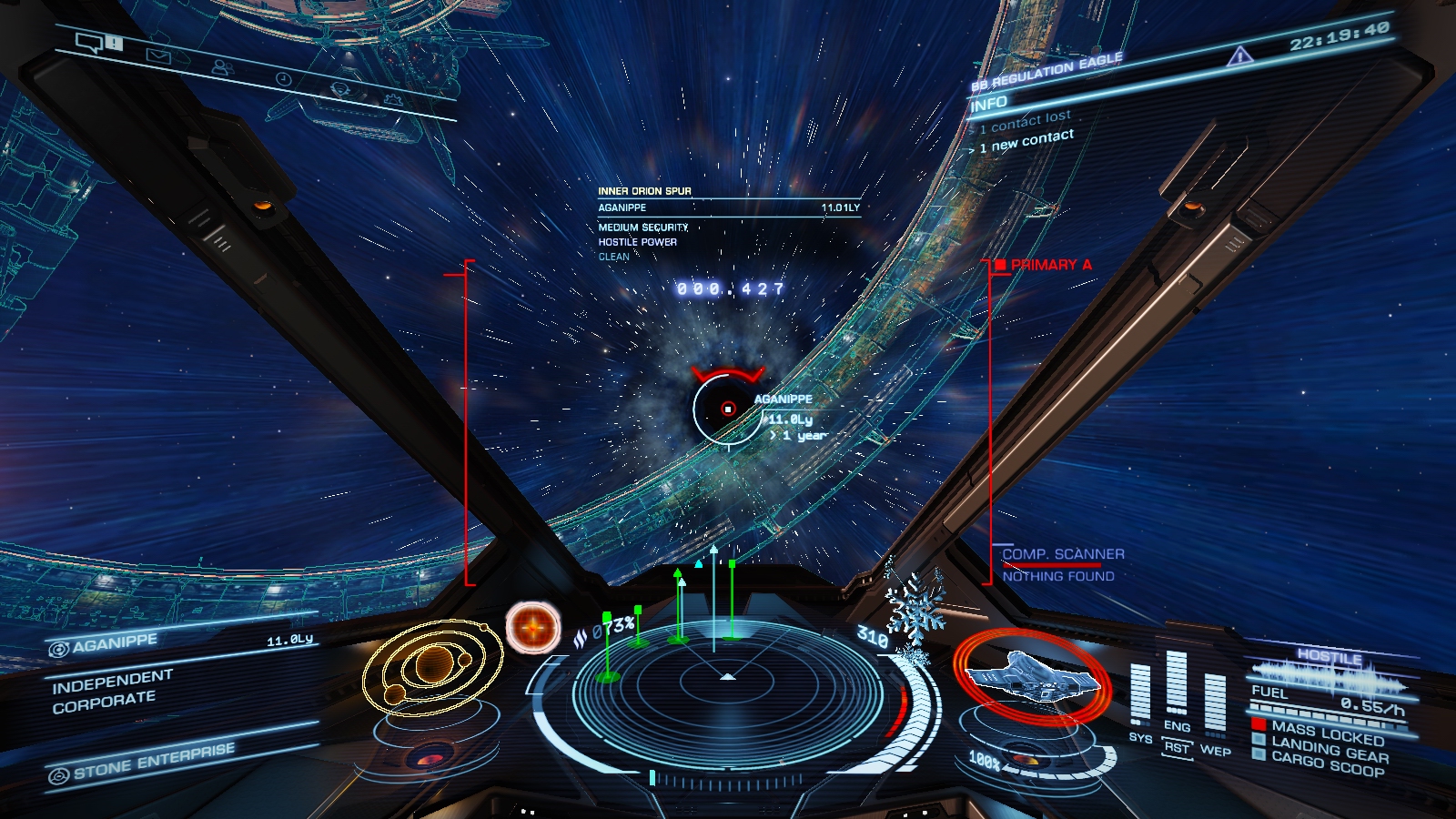 Spirits were high at the NPI Navy’s Officer’s Club in the second ring of Leonard Nimoy Station in the LHS 3006 system. They were also flowing freely, thanks to one of their own having gotten a modicum of justice against the scourge that had descended upon their normally quiet volume of space. Not the pirate scourage that was the reason for their increased patrols, but the Buckyball Racing Club.

Granted, they brought in far more credits than they cost, due to radically increased level of tourism, facility rentals, rushed replacement part orders, and of course all the “triple pay” overtime, but it was a matter of principle. Privately, they had to admit that they'd cheered just as loudly when the BRC was someone else’s problem, but now it was theirs, dang it.

“Alright, so there I was on patrol at Bradford,” Lieutenant Katarina ‘Kit-Kit’ Castro said, repeating her tale for the new arrivals, “when I spotted her ship recklessly blasting through our rather crowded traffic. While she was using the station’s infrastructure as an obstacle course, I obtained permission,” she said in a loud voice towards a nearby table, “to break off and pursue. Now, she’s repeated the same route several times now, so I knew where she’d be going, and a pretty good idea of how long she’d take in the station before jumping out.

“Now, one of our aging Viper Defense Craft couldn’t hope to compete with one of those expensive and over-engineered monstrosities most of the Pilots Federation fly, especially in normal space, but despite the cheap knockoffs of the PF’s FSD in our ships, we can hold our own in Supercruise. So I was waiting for her at LHS 3006, and there weren't many ways she could go. Now here’s where it gets interesting…”

The massively muscled woman accepted another drink. “Now, I know those sons and daughters of Emerald like to call themselves ‘heavyworlders,’ and technically it’s true: Emerald is just barely beyond what’s considered safe for most unaugmented humans, but there’s no way one of them lightweights can handle the G’s like a native of Jade can… not that there are G’s in Supercruise, mind you. But we're both of a generation that remembers the bad old days before the FSD. The days where the only thing keeping you from dying from the g-forces, or going mad from the experience, was your Stardreamer capsule..."

She was interrupted by the bartender. "Hey, LT? There's another reporter at the door wanting an interview."

"Tell them to go jump in the fusion reactor. Politely, of course."

"Sorry. My dad may say that whatever it was that led us to flee the Empire was taken care of, but I'm not going to take any chances. I'd rather stay safely anonymous... at least as much as I can. Now, where was I?"

"Right. Anyways, learning to fly back then leaves it's mark, even if you know better. So I took advantage of that quirk people like us have. Plus, it helps that I know that Cmdr. Stevenson has a preferred approach angle, even when she's trying not to be predictable. That's how I managed to get a tether on her. Not for long, naturally, because we don't get the best equipment, but just enough to leave an impression." Lt. Castro leaned back on her chair, a pleased smile on her face.

"I'm surprised you'd interrupt her race like that, Kit-Kat. I thought you were her biggest fan."

"Oh, I am. Got to root for the hometown girl, even if she's one of those stuck-up snobs from Emerald. But if she's in our space, she'd better obey our rules. Even if that damn Pilots Federation treaty ensures that most of those rules don't apply to them."

Failed, crashed into Vuclan's rings...
Retrying !
Failed again, Elite crashed ! (after me getting to close to Vulcan...)
Reretrying !

Ok, Still a few seconds shy from other new buckyball racers... 30:38 I think...
But I think I fixed the regulation issues by tricking the onboard computer on BB, my regulation eagle (soon to be renamed BB initials after the famous 20th century song by Gainsbourg - no doubt it will improve my performance), to take a picture every time I boost.
More sorting to choose from and it gives a nice "stopmotion" feel to the result.

New run submitted for Regulation Eagle. First run wasn't an improvement, but despite two bad landings, one bad approach, and I slamming into the infrastructure of Leonard Nimoy station, I managed to close the gap between me and @Alec Turner a fair bit.

You can watch my ship pretend to be a pinball below in about an hour!