"...shuddup!
Are you sure this is working...
Be quiet now.
I mean, if they can hear us...
They won't if you can keep your flappin' mouth shut for the next twenty minutes.
But if...
Bjorn.
Mhh! Mhh mhhm mhh mhhmhhh?
Do I have to remind you that our hunky technician, in addition to that duct tape and zip ties, also carries a large spanner on his extensive tool belt?
Mhhmh mhhhmhhm.
Don't think so. If your informant is right, this is Pulitzer material. If not - well, it wasn't me who signed the chitties for all this conditionally illegal tech from the store.
Mhhmhhm!
Now be quiet. It gets interesting.
....
*pling*
...errrmmm....
*PLING*
...
Thank you.
My dear colleagues, unfortunately I have to tell you that a tasting of this 150 year old Lavian Brandy which we unexpectedly acquired in lieu of overdue dues from a missing, believed dead, pilot, was not the only or even the main reason I invited the inner council to this meeting.
We have a problem.
The funds of the pilot's federation are slowly, but most definitely bleeding out. It's not only the political situation, with the distinct possiblity of having to run a full scale war against an alien species, this is much worse. If we can't stop this leakage, we will have to take some unpopular, even extreme measures. Our accounting department has been able to pinpoint a few of the major losses.
First of all, there's our annual dinner....
QUIET!
Please calm down. If we can plug at least one of the other holes, we hopefully won't have to cut into that budget.
Next, there are the private pilot's insurance claims. I believe we are making some progress here with regard to the large number of Sidewinder claims within various station's local zones. Our recent change in the insurance conditions regarding the loss of Sidewinders within a station's immediate proximity already looks promising, and the impeding general overhaul of the basic insurance handling should see us clear well through the next two quarters. After that, we expect the new detention facilities to be cost neutral by the first quarter of 3305.
However, there's a third problem, concerning our cargo insurance services for the commercial spacelines. We are faced with increasing losses on the cargo insurance, mostly due to breakages claims. It's nothing we can put a finger on, but the actual claims consistently exceed our modelling, eating into our reserves. Either there is some very elaborate insurance fraud going on, or our modelling isn't quite up to scratch.
...
I'm afraid accounting has no idea about how to tackle the last one. We can't just increase the rates, they'll have to match the models or the big three's tax auditors will string us from the next airlock. Accounting cross checked their models and found no errors. If it's fraud, then whoever is doing it is really, really good, probably using insurance models at least as good as ours. The percentage is very small - but multiply it over a few ten thousand systems, and the absolute value skyrockets.
So. Anyone got an idea?
...
No.
...
Tried that.
...
You can't be serious.
...
Too risky. We may insure risks, but we won't take them.
...
Who would do that?
...
B-R-who?
...
Sounds like a win-win-win. They succeed, and we find our leak. They fail, and we get a solid reason to increase our rates and in addition someone to take the blame. Ok. Who's going to talk to....
...
...
...
Hey? Stuff this, the connection broke up. Just when it gets interesting.
Charlie, you still got your contact in the BRC?
Mhhh?
Yep.
Mhh mhhm mhh mhh mhh.
You'll have to. PF is planning something, and they want the BRC to handle the hot potatoes. So far, so usual. So, if you want that Pulitzer for exposing the PF's machinations, you'd better get in contact.
Mhhm mhh!
Not necessarily."

Getting Cousin Bjorn to put a bug into Charlie deWitt's Orca had definitely been worth the load of Gueuze Beer. So, the PF was again planning to get the BRC to do their dirty work. But what was it this time?

​
On behalf of the chairman of the Buckyball Racing Club, I would like to invite all active members and interested pilots to an extraordinary meeting
at the Escape Bar & Grill, Noriega Station, LTT 2151
on Friday, 23rd of February 02nd of March1 3304, 20:00 IGT

For the Race Committee
(signed) A.Elbub

1Due to circumstances beyond our control2, we were forced to move the date of this meeting by one week.

2Actually, Lakon bribedpaid the landlord to reserve the bar for an exclusive event duing the planned race week. Rumor has it that they're going to announce a new ship.
​

let me get straight to the point. You all know that our relations with the Pilot's Federation have been somewhat strained in the last few months, perhaps not entirely unconnected to all those insurance claims put in by BRC members. Now, last week I received a call from the CFO of the Pilot Federation's insurance branch. You might be aware that the PF's insurance for private pilots is only a small part of their overall work, and that they also handle the insurance for the big passenger and freight companies.

In this specific branch, they have to rely on models to calculate their insurance rates, and apparently they have discovered some discrepancies between those models and their actual payouts. In order to check these models against reality, they have requested the BRC to supply them with some baseline data for freight shipping under, what they call, "challenging circumstances". Since you all did so marvellously with the fast and high-g landings during last year's "Heavy Metal" and "Prison Break" races, I naturally accepted on your behalf. We would just do what we always do, that is, fly fast, and doing the PF a little favour by carrying their sensor packets along. Incidentally, and while we're amongst ourselves, this little favour probably won't hurt our standing when we will have to negotiate their handling of race related insurance claims later on this year. Sounds like a win-win.

The task is simple. Pick up some breakable items, stick one of these sensor packets in each container, then land at a few planetary bases with increasing gravity, finally deliver the stuff, still packed up, together with the sensor packets for analysis to the PF labs here Noriega Station. If, at any point during this trip, you feel that the risk becomes too great, just take a shortcut and go to Noriega Station directly. Piece of cake, actually. Speaking of which, the race headquarters will be located here in the Escape Bar & Grill for the duration, and I persuaded the PF's CFO to cover the bill for the participants, so enjoy your drinks. I can wholeheartedly recommend the Pina Colada.

One of those sensor packets is attached to your briefing documents. You can pick up more from the table at the door if you want to do multiple runs.

​
The race will require the participants to start from Noriega Station in the LTT 2151 system with an empty hold (or at least not holding any Crystalline Spheres). Fly to Snow Moon in the Bento system and pick up at least 1 ton of Crystalline Spheres. Now visit the remaining stations as outlined in the table below, in order:

All stations on the way offer at least repair and refuelling services, and you're free to use those. If you feel that you've had enough, you can abort the run at any point after Koch Beacon and return to Noriega Station directly. However, doing so will add a penalty of 8 minutes per station missed to your race time - and it's not permitted to e.g. miss a couple of stations inbetween and claim the last station on the list.

This is a round trip race, starting and finishing in Noriega Station in LTT 2151.


Options
​
Since this race practically shouts for it, I'll also throw in the "shieldless suicide" bonus. Complete the race in a shieldless ship (and without an AFMU!) and you'll receive a 3 minutes bonus on your time. Repairing at the waypoints is still permitted (basically because I can't enforce that). However - complete the race with less than 10% (proof required) hull left (and the Crystalline Spheres still in your hold!), and you'll get the "crash pilot" bonus of 3 minutes (see amendment below - the damage must have been present at the last planetary base you docked). Both boni may also be claimed in the Healthy Hauler class (in which case, of course, you will have to leave out the shield generator).


Ship Classes
​
This race will permit two ship classes. Either class may be flown in any of the game modes, although I would encourage you to fly in Open mode. Main interference will most likely be from NPC pirates. With the Crystalline Spheres in your hold, expect at least one or two interdiction attempts on each run.

Healthy Hauler: your basic Hauler with an upgraded loadout. All of it available at Noriega Station. However, they do not sell heatsinks here, so be careful .

In total, that's a minimum of 11 screenshots, plus whatever neccessary for loadout options and/or bonus claims.

Alternatively, as usual, a video showing all the above details is also acceptable.

Amended as of 06.03.3304, 09:35 IGT: in order to qualify for the Crash Pilot bonus, you must show <10% hull at the last planetary port you docked at and when arriving at the finish line at Noriega Station. It has been pointed out that otherwise, you could willfuly just smash against the station immediately before landing (not that anyone would do this...)

Amended as of 09.03.3304, 20:50 IGT: The Bruski rule: each race submission must use an independent image album (or video, or otherwise set of screenshots). No mixing up of multiple runs in one album (video, set, whatever).


​
Fly fast, CMDRs - just remember that you'll have to bring those Crystalline Spheres back to Noriega Station. 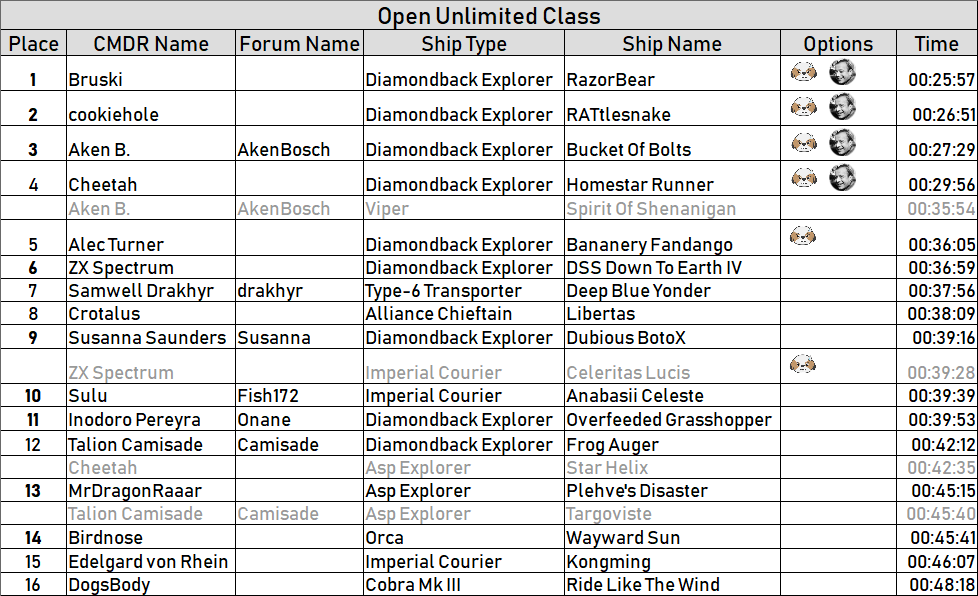 I too am watching with interest.

Looking forward to it...

Looking forward to exploding on impact then.

Make that four then.

So that would be the four hobbits then. I claim Legolas!

OP updated. Just for clarification: that's not a life event (although I plan to be there, just in case) - only the time/date I plant to reveal the actual race setup. I'm just indulging in a bit more RP.

"Chicken Run" gets a brief mention on page 16 of the February edition of Sagittarius Eye magazine, within the "A*" challenge feature.

I'm endeavoring to be here too! Very intriguing

Brilliant - 3.0 is dropping right in the middle of the race. Should make things interesting!

Oooookay.... let's see how that turns out. Worst case, I'll have to split the leaderboard into 2.4 and 3.0 runs. If the 3.0 launch goes without a problem (who am I kidding?), a race extension probably won't be neccessary. But please keep me informed if you want to race and run into any problems that can be attributed to 3.0 specifically - especially since the race will be sort of relying on planetary landings....

It might make sense to delay the race a week to avoid the clash with the 3.0 launch. As with any major update, it is highly likely that the servers will be a little flaky during the following days, as large numbers of players pile in to the game to see for themselves what the new update brings.

If that's okay with youBucky, let's move the race and I'll update the banners and invitation accordingly. Hopefully this evening (CET).

OK, OP has been updated.

Have fun, and fly fast!

Hi Camisade and welcome to the Buckyball Racing Club!

There are three rules.