Buckyball Racing Club requests your aid in testing the durability of the new planetary approach suites. These might now have been made available to the majority of independent pilots, but will they really stand up to repeated fast planetary approaches and departures? There's only one way to find out...

THIS RACE HAS NOW ENDED.

A planetary approach suite is essential to participate in this race (i.e. you must be playing Horizons).

Call at the following starports and surface bases, in any order:
Finish line is back at Burkin Hub in Nariansan.

For guidance on what to capture on screenshots, see the How to Enter page of the Buckyball Racing Club website. 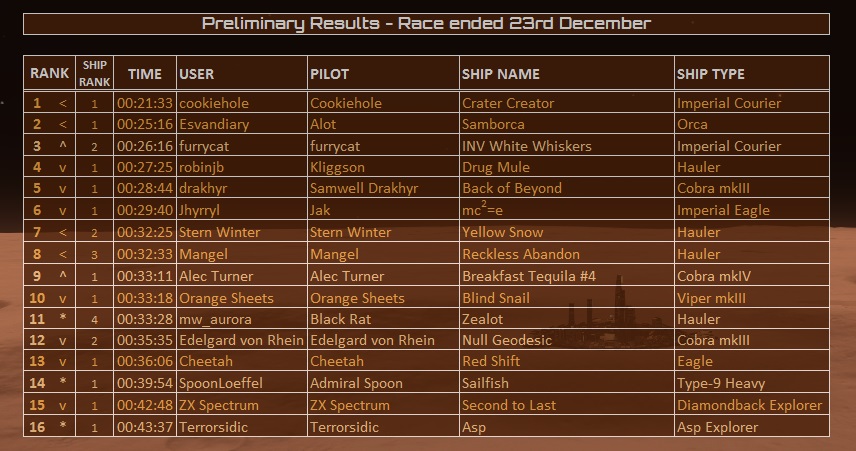 Why can't I see any times on the leaderboard?

Actual times will be revealed for the last day of the race.

The sight of your name at the top of the leaderboard, and the opportunity to say you won a Buckyball Race.
Oh, and depending upon how Ceska's feeling, possibly the chance to get your very own mention on Radio Sidewinder

Can I use FSD Injection to increase my jump range?

No, the use of FSD Injection is not allowed in this race.

What's to stop me cheating?

Nothing. Like the Buckyball Runs, we operate on an honour basis here. There's nothing I can do to stop you from faking screenshots or using exploits. But where's the benefit in that? It wouldn't get you anything, except a lasting feeling of shame. This is all about doing the race for the fun of it.

How come you've entered your own race? Isn't that cheating?

My entry was set before the race started, to give an idea of times. And it certainly shouldn't be the fastest run, given that it was set in a Cobra still fully equipped with weapons, shields, etc...

Time waits for no-one, and neither does the race clock. It's all part of the race.

I would like to join but I can't make this week - will there be another race?
I enjoyed that, when's the next one?

The next race is coming very soon indeed...

i'm going to have a bash (literally) this evening.

hoping to see a few other on the course. should be fun!

Course looks good Drakhyr. Ill try the hauler on it.
USER: Robinjb
CMDR: Kliggson
SHIP: Hauler
NAME: Drug Mule
Slammed my self into spocs 900 4 a few times, and OC is pretty unforgiving if you over cook your SC

Really pleased to see those two surface bases on SPOCS 900 4 in the final list. Guess there's no point testing the route for you anymore, time to get my game face on. Now all I need to do is get back from Maia (which is a shame 'cos its planet surfaces are stunning, especially with the nebula in the background).

Probably won't get a chance to compete until Monday, save me a place on the board.
Last edited: Dec 19, 2015

As fun as it appears, I'm just a bit too far away to take advantage. I will be cheering everyone on, however, and hope for some truly revolutionary racing!

I might try an Imperial Eagle too, as it probably has a slight advantage in Docking speed.

This is really going to be an interesting race with a 50% chance of the jump target being obscured; and the hopping between the orbital and surface stations will depend on the day and night times of these planets too. I've done a little bit of outfitting this evening, but a further investigation of the big chunks of rocks I'll be crashing into will have to be done tomorrow

Downloading Horizons now...anyone got a link to a crash course in planetary landing?

mw_aurora said:
Downloading Horizons now...anyone got a link to a crash course in planetary landing?
Click to expand...

Aren't you on the other side of the galaxy?

But it wasn't going to be a winning time anyway. When you overshoot a planetary approach and end up too close to the planet on the other side...it costs you a lot of time.

Word of advice...don't crush the defense towers with your ship. The others will all launch missiles at you.

Jhyrryl said:
Word of advice...don't crush the defense towers with your ship. The others will all launch missiles at you.
Click to expand...

They don't like it if you land on a skimmer, either


mw_aurora said:
Downloading Horizons now...anyone got a link to a crash course in planetary landing?
Click to expand...

There is a specific "landing" tutorial video issued by FD. I haven't watched that one myself, but I expect it gives the same information as Adam Woods did during the commander training livestream a couple of weeks ago, which I certainly found to have a few useful tips.

E
Just submitted the screenshots for my first attempt with an Imperial Eagle. Hopefully I'll get a chance to improve on it over the next couple of days but if not, then at least I've managed to get the 'Toya' onto the leaderboard. I managed to grab a good screenshot as I was leaving Celsius Market, which is now my favourite for this ship:

Jhyrryl said:
Aren't you on the other side of the galaxy?
Click to expand...

Yes I am - I have a second account to play with

Thanks Drakhyr, I'll give them a watch.

Here's the first board update, to get a board up there and record the early runners.

First up, and getting an early run in last night within a few hours of the gates opening, was Cmdr Kliggson. His Hauler Drug Mule, the name of which you would expect to attract a bit of attention from the local authorities, managed to set the new pace time. Kliggson came in well ahead of the reference time I set in my full-armed Cobra, despite one rather heavy landing (hey, bouncing at the surface bases in SPOCS 900 is perfectly normal, honest).

Meanwhile, Edelgard von Rhein's Imperial Eagle Toya is trailing by a fair margin, though an improved route may make up a large chunk of that gap. I'll keep quite on the subject of Imperial ship pilots and vanity shots .

BTW: I now hate the Repair All button, I got to the start line last night, clicked repair all (I'd had some toasty refuels on the way) and there went my 0% "200Kylie Untouched since BBR7" paintjob. Grrr!

On the positive side, I took the opportunity to give The Nomad a well deserved festive respray - we'll see how that looks after a few Buckyballs and an occasional trip to Sadge.

I'll be running with the Frontier Stream during our slot, so I guess I'll sign up publicly.

Raiko said:
(And I won't feel quite so sad when I smash her into the ground at Spocs 900 4!
Click to expand...

Can confirm that is very likely to happen... I haven't quite managed to total my ship yet, but twice now I've come within 25% of it!