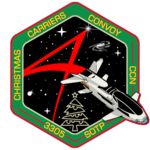 Presented by 'Shadow of the Phoenix' in conjunction with the 'Colonia Citizens' Network'​
So, what is the Christmas Carriers Convoy?
Let’s look into the history. On the 2nd of December 3302, 493 pilots set off on an expedition to supply the Colonia outposts and stations with much needed hardware, equipment and colonists. The Convoy saw hundreds of heavy freighters, passenger ships, tankers and escort fighters fly more than 25,000 lightyears. The main aim of the expedition was to support Colonia by delivering much-needed food and equipment to the region and by transporting new settlers, as part of what is set to be one of the largest freight convoys in human history. (You can see more info about the first CCC on the official expedition forum thread).

The next years expedition was successful as well! At our peak we had 140 Commanders assisting in various roles. While CCC2 was held, we had chronicled several key events, both for current pilots and for the CCC2 in general. Such events as performing the biggest mass-jumps the PS4 has ever seen. That great achievement was provided by Cmdr Catisfaction and Cmdr Larenon. As an addendum to the delivered goods we had provided much exploration data throughout the expedition. That was a huge Christmas present for colonial scientists and star cartographs. The exploration rank of the most of our participants was even uprated to Elite. Total 5752 tonnes of different goods were delivered to Colonia in time, 887 tons of that was gold. Our baggage handlers reported that 1 of 10 golden bars were actually chocolate. (You can see more info about the CCC2 on the official expedition forum thread)

The third expedition! 94 registered Commanders set off on a journey with a full cargo of gifts. As always, we had chronicled several key events. Commanders that were using Open Play instance were attacked by pirate groups under the lead of probably one of the cruelest CMDRs ever. During the expedition the first Interstellar Phenomenas were found and new technologies of space scanning were discovered. That helped our members to get exploration data for hundreds of millions of credits. As always colonial scientists and star cartographers were impressed by the quantity of data and logs. CCC3 was held just before the Distant Worlds 2 expedition, and among the prtiipants of CCC3 were radio presenters from Distant Radio. We had couple of live interviews after the CCC3, while chilling around Stellar Phenomenas. Those great achievements and other fantastic events were filmed, which meant that it was maybe the most video documented expedition, of all the CCCs. Total 5861 tonnes of different goods were delivered to Colonia in time! So Christmas was successfully delivered! (You can see more info about the CCC3 on the official Discord chanel and official expedition forum thread)

Now, it is time for the fourth Christmas Carriers Convoy, that is already a tradition of delivering Christmas and New Year for the Colonial people. There is no spruce growing in Colonia, so its impossible to make a true Christmas tree. Let’s make Christmas in Colonia, a holiday of galactic scale. So, we would depart on 1st of December, by the new route with a bunch of attractive sights along the way. There are waypoints which are used to refuel, resupply, and as a meeting point for some mini events such as racing around the landing site, SRV-ball, for some photos, for interviews and some technical/moral support of each other. Arrival date is 24th of December. Take a part in history! So Let's Bring Holiday in Colonia Together. Join Now!
To participate register on EDSM and join our discord server!