Release Club Raiders: Fighting the Club in the BGS

What is The Club 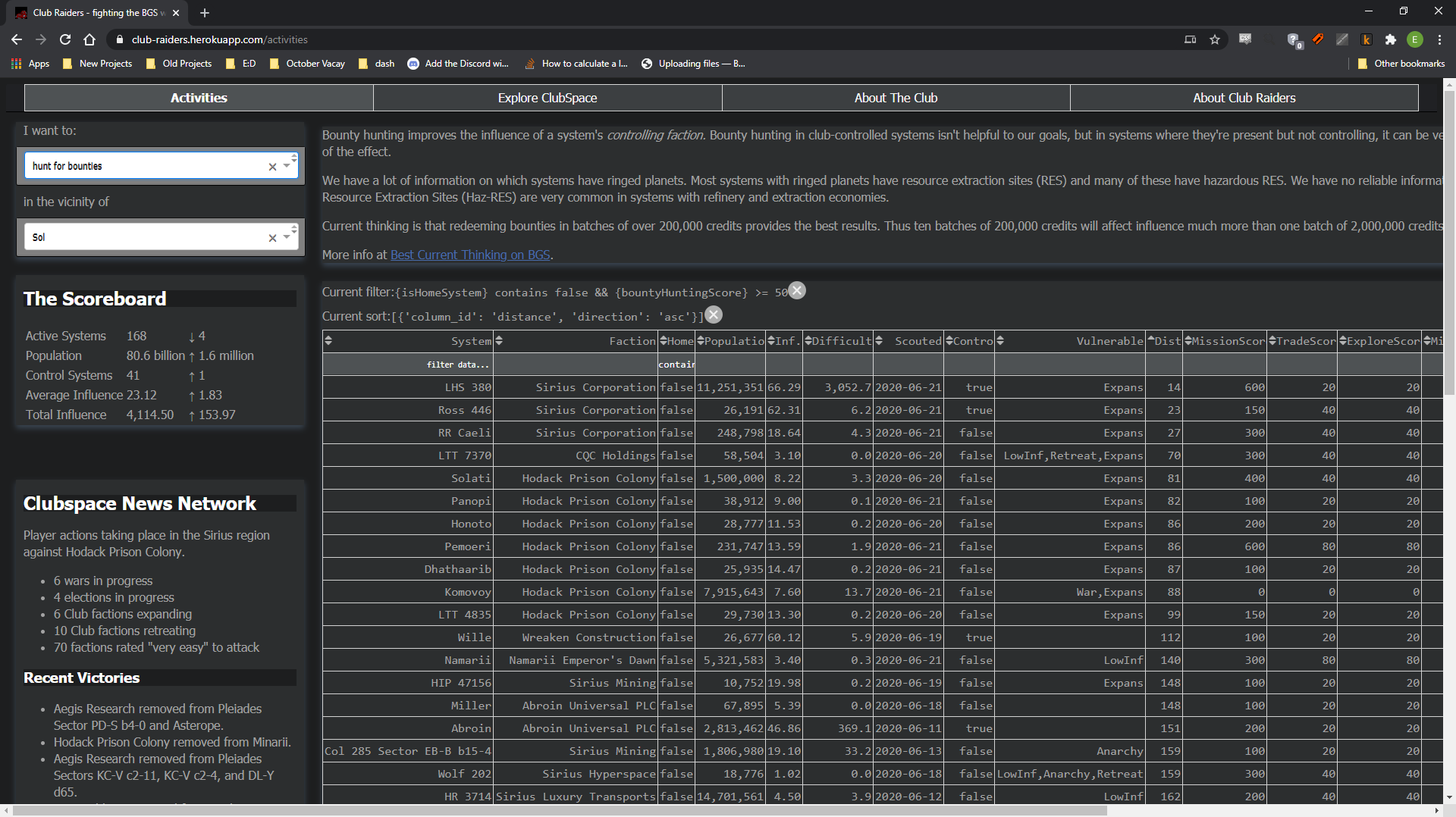 What is Club Raiders? 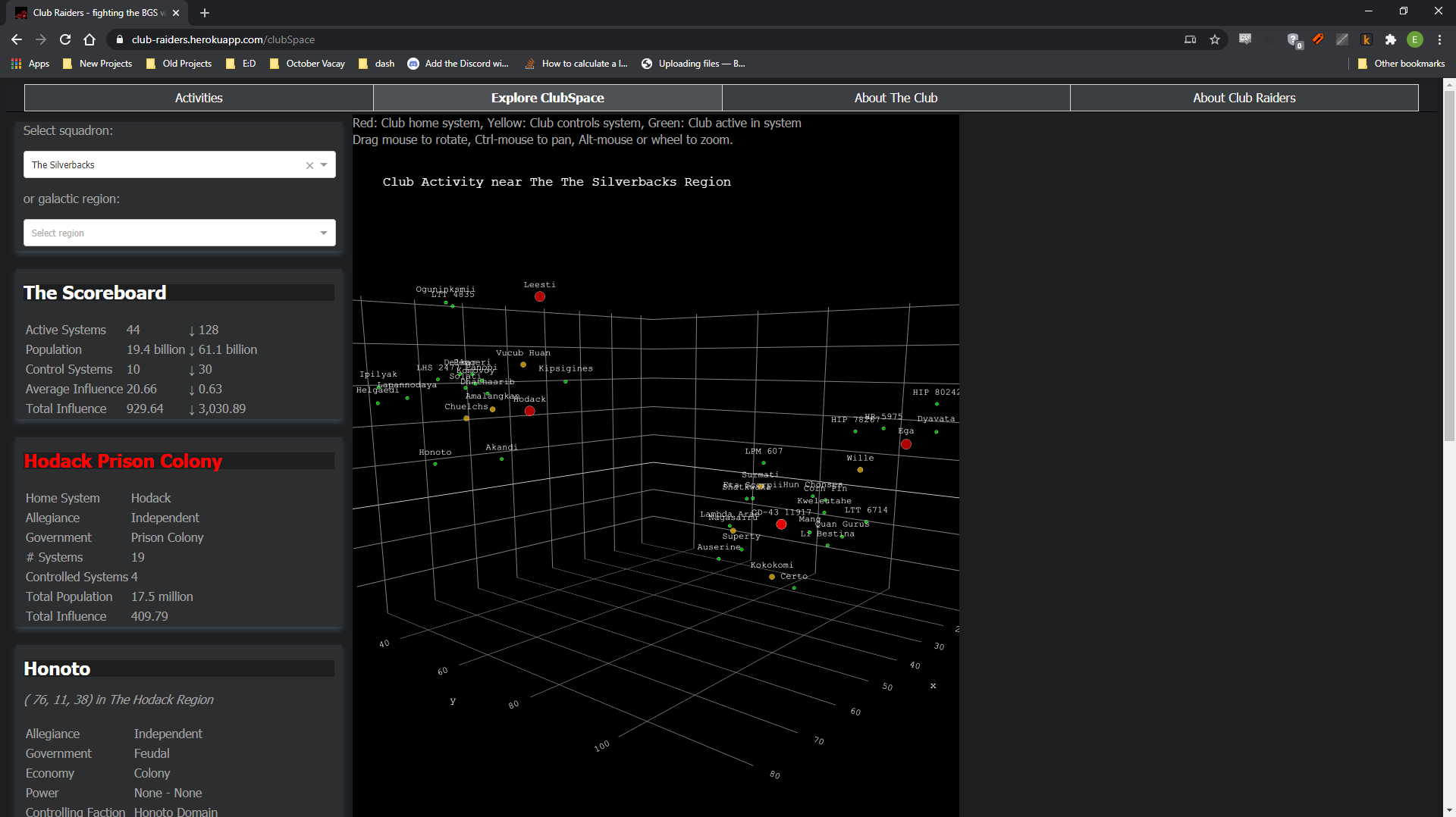 How does it work?

What we need to move forward are:
How can we communicate?

[T]hey know everything. They have the history – not the sanitised version from the public records, but the truth... Challenge the authorities. Force their hand. Refuse to be manipulated. Do not rise to their provocations. Make your own powerplays, organise embargoes and blockade the ports. Break their hold and force them out into the open. Blaze a trail. Visibility is the one thing they cannot abide. Or do nothing. Be content to be a pawn in their game. - Salome's Requiem
Click to expand...

At time of writing, the 32 Club minor factions are currently active in 169 systems, spanning the galaxy from Sirius 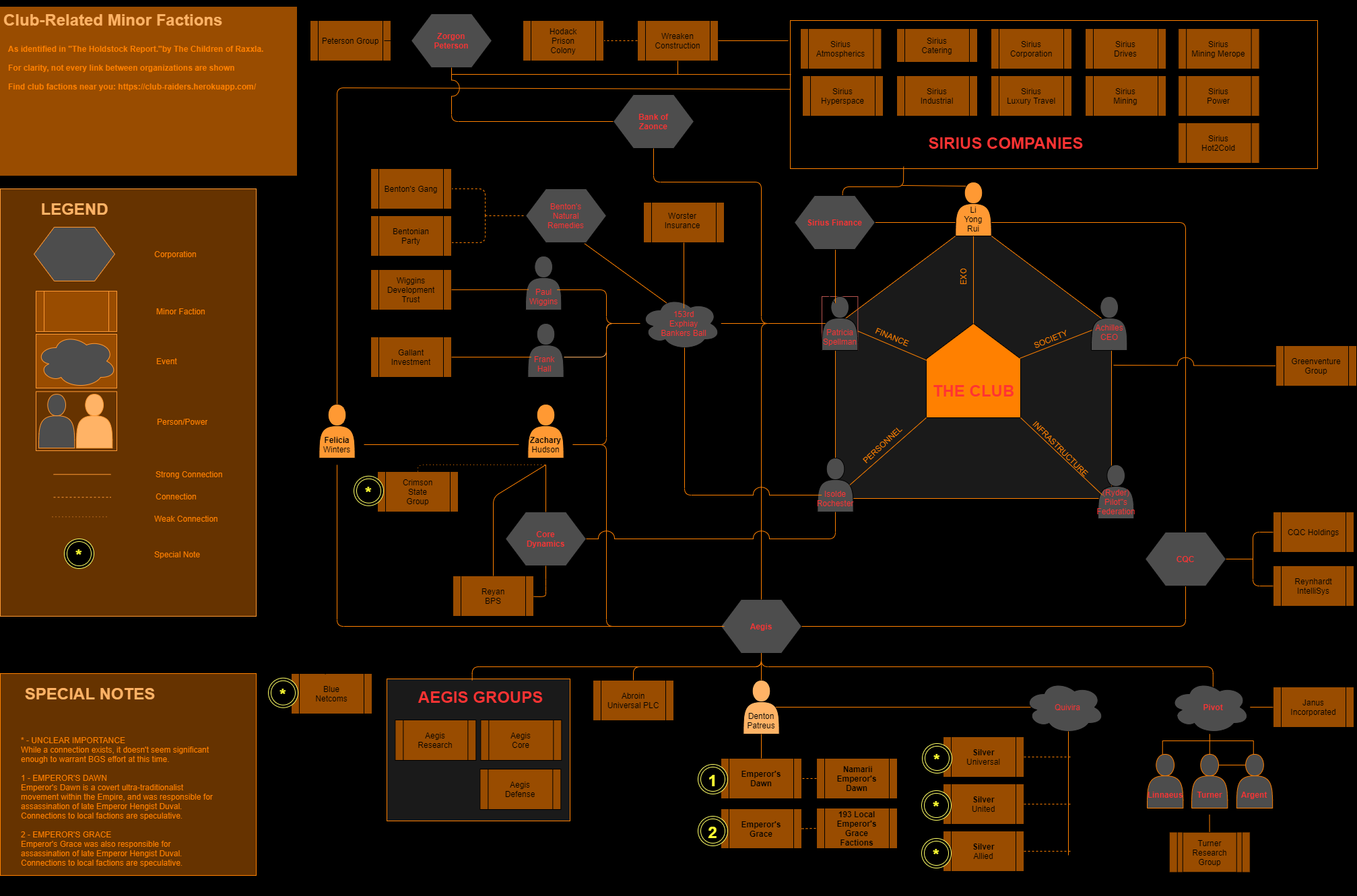 Corporation in Sothis, 352 light years west of Sol to Gallant Investment Brokers in Exphiay, 283 light years to the east. As far as we know, they can be kicked out of 135 of these systems - the other 34 being home systems and code-locked Aegis instances. Currently, 69 of these are rated as "very easy for a single commander" to force a reatreat and a few are truly Herculean tasks that would require multiple-squadron effort. At time of writing, 7 Club factions are at war, 4 are in elections, 6 are expanding, and 4 are retreating. These statistics are tracked and updated daily on the web site.

The 32 minor factions that were shown in The Holdstock Report to be part of Club operations. While many more connections exist than are indicated on the diagram, attempting to draw them produces something closely resembling a plate of spaghetti. Player minor factions, even those with suspicious names, are omitted as targets of Club Raiders.

Several of the factions have names that are familiar to many commanders: Sirius, Aegis, Janus, Turner, Peterson. Some are regional powers like Wreaken Construction, the Benton factions, and Hodack Prison Colony. Some like Reyan BPS and Worster Insurance might be faint memories from a community goal or a GalNet article unless you're a real Lorehead.

Their Presence
Only 18 of the 32 Club-related minor factions are currently present in multiple systems (excluding Aegis Defense, which is present in 2 unpopulated systems). Over 80% of these systems fall into 10 clusters or regions of high activity. The regions are: 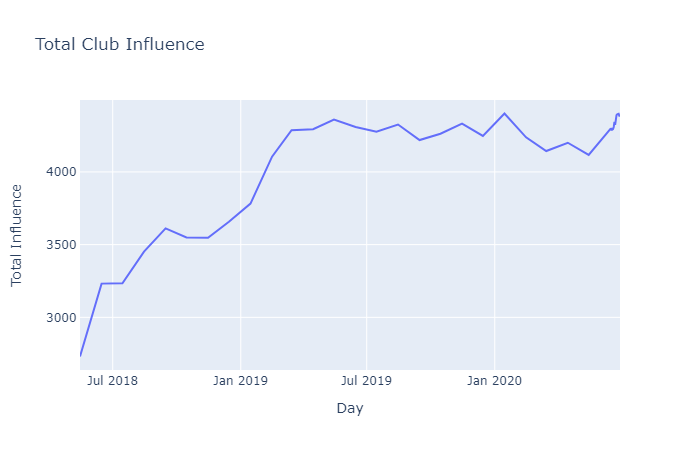 The app has global and regional faction presence data updated daily and presented in tabular form as well as a 3D interactive maps.
Last edited: Jun 28, 2020

Current War Zones
Wars are one of many good ways to swing a faction's influence. As of this morning, the wars in progress are:

What if I assault Sirius where they live, in Sirius?

Havvk said:
What if I assault Sirius where they live, in Sirius?
Click to expand...

For all we know, that could be the key to everything.

But because of the high population it would take a lot of effort to affect their influence much, and they're at 59 or so. Even if you did, since it's their home system, you couldn't kick them out of the system. Maybe if they lose a certain base it could trigger something.

On the other hand, there are a lot of systems like LHS 2887 that has a population of 1500, influence of 11.59, and they're losing an election 1-2 right now. A single CMDR could kick Sirius Corp out of that system pretty easily over the course of a week or so.

But we don't know what the key is, or if there even is a key. It's all guesswork and experimentation for now.

7 faction instances removed, 2 expanded, a net loss for the Club of 5 systems:

PLEIADES HISTORICAL SOCIETY [PLOR] has formed to explore the mysteries of the Pleiades, and to combat regional factions affiliated with The Club: Aegis Research, Janus Incorporated, Pleiades Resource Enterprise, and Sirius Mining Merope. The mystery of HIP 22460 is of particular interest, including The Black Flight, Megaship Overlook, and the involvement of Pleiades Resource Enterprise.

Members and non-members welcome at the discord server: https://discord.gg/BQUuSYP. A fair amount of resources and guides are available for research.

In September we did fewer, more difficult operations in systems with active player factions and significant traffic. Since June 1, we have removed 19 Club factions from systems representing 2.4 billion people. Significantly, this month, Club faction Sirius Mining Merope - which at one point was active in seven systems, now exists only as a zombie faction in Merope.

We're pleased to announce that squadron Close Encounter Corps, led by CMDR @AntonyVern [СЕС] have joined the fight against the Club. Besides their help in the campaigns in Pleiades Sector PD-S b4-0, Hemaki, and Wolf 202 - working with a large squadron has led to a number of improvements to the discord, which will be valuable when other squadrons join the fight.

PLEIADES HISTORICAL SOCIETY [PLOR] formed in August to explore the mysteries of the Pleiades, and to combat regional factions affiliated with The Club: Aegis Research, Janus Incorporated, Pleiades Resource Enterprise, and Sirius Mining Merope. The mystery of HIP 22460 is of particular interest, including The Black Flight, Megaship Overlook, and the involvement of Pleiades Resource Enterprise.

Everyone interested in fighting the club is welcome at the discord server: https://discord.gg/PdaCsRA

Plans are starting to percolate for a major offensive against Pleiades Resource Enterprise in a top-tier system. Plenty of room to welcome players that enjoy exploration, trade, running missions, combat, and piracy/murder for an operation that should take about 2-3 weeks. Want to learn more about the BGS - this is a good opportunity. One major and one minor squadron are involved in the planning. Find out more at the PHS discord: https://discord.gg/PdaCsRA.
You must log in or register to reply here.
Share:
Facebook Twitter Reddit WhatsApp Email Link
Top Bottom