Greetings comrades. I think I joined your RU sister group few months and even if I hail from a small town near UA, would prefer english spoken group. Currently fly with bunch of stoners but is time to put training wheels behind. Also our leader formed a band... other guy is still flying at the other side of Galaxy..rest of active crew is from Texas..overall..looking for new crew. Currently docked at Jupiter's Europe. Let me know where to find you nearest. Will join Discord today. Also let me know what needs to be known prior my full commitment. Thanks.

We are one big happy family. We require you to read ang agree to our articles of association and produce evidence of being allied with any communist faction.

Well got back from Beagle so I need dust those relations with Sokatines comrades. By evidence you mean? Joined the discord already so will probably drop a printscreen once proletariat has enough grain and wine in that system. Also Purple boys are running havoc there... and we all know purple is the colour of burgeoisie.. Btw system is being exploited by Mrs Duvall. How can I counter that? Thanks..

The means were seized that day... 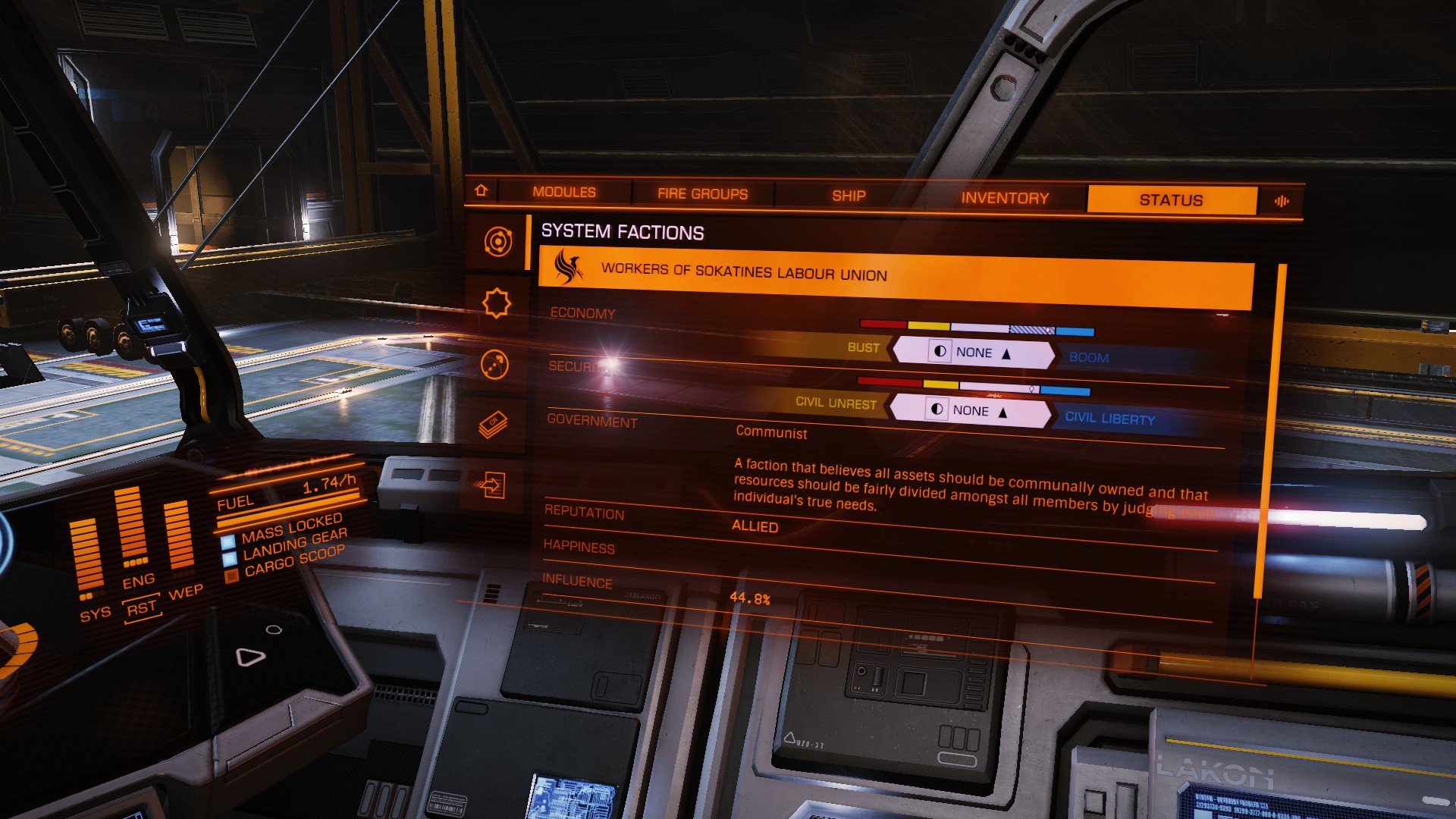 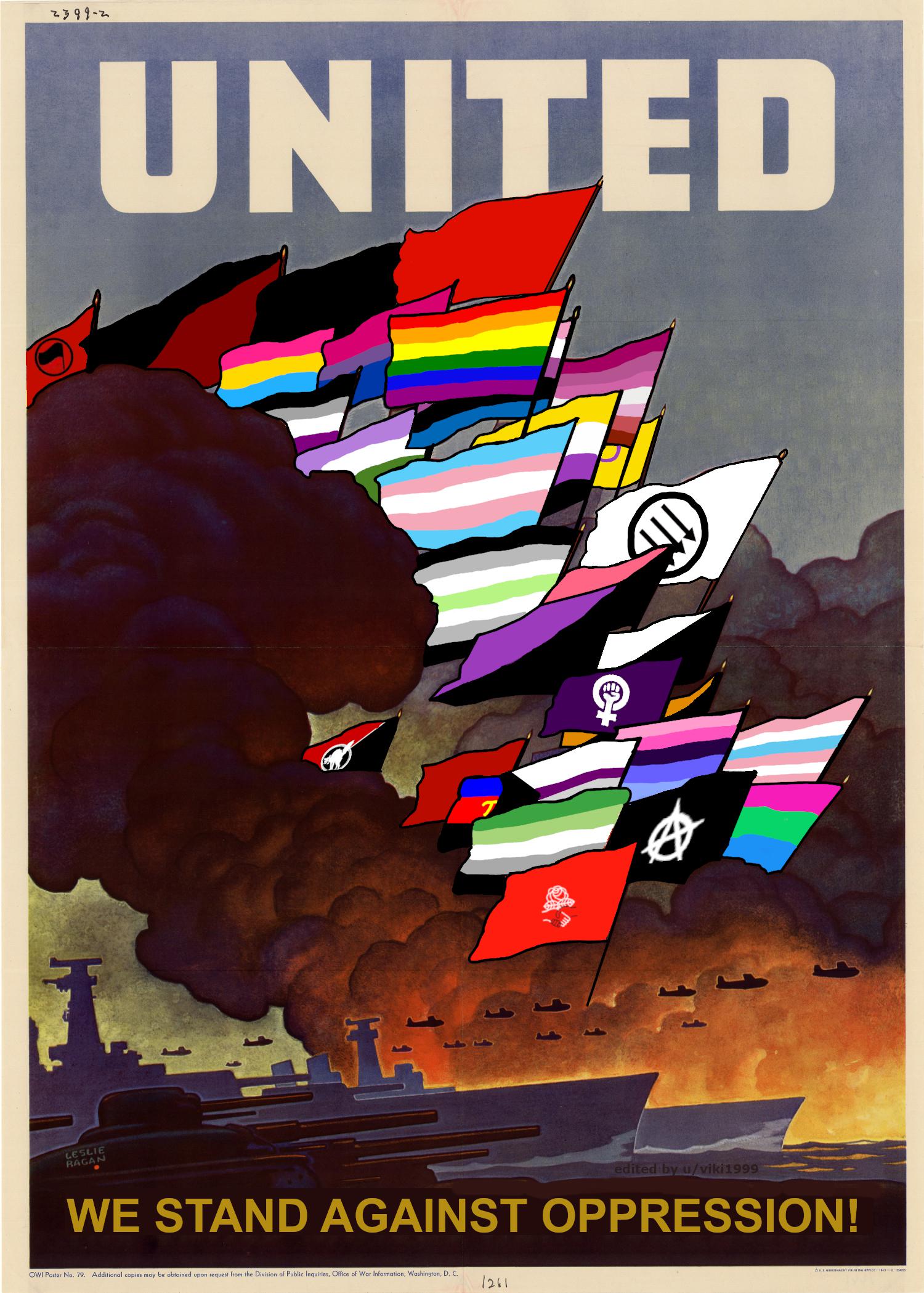 If anyone's interested, anyone living below about 55-60° N latitude should be able to see Manite (or where Manite is supposed to be) about this time of year at around midnight. It's approximately in the direction of Kaus Media in the constellation of Sagittarius. It can presently be seen roughly between Jupiter and Saturn, at about half the distance between a line between them and the Horizon at 53° North at midnight. (If you live north or south of that, it will be that many degrees difference down or up.)

Tonight, Jupiter was just right of and down from the moon. Obviously the moon rotates through the sky by about 13° a day, so it won't be in the same place tomorrow, but it should still be easy to pick out Jupiter; it's the one with the moons. Saturn is about 40° to the left of that (the rings are clearly visible through binoculars).

The Greater Manite Volume is ~60ly wide and covers an arc of the sky of about 40° total. That means that it extends to where Jupiter and Saturn are right now. Pretty big isn't it? Three hundred and twelve stars within that radius are communist, and the Manite-Egovi bubble extends beyond that in several directions. 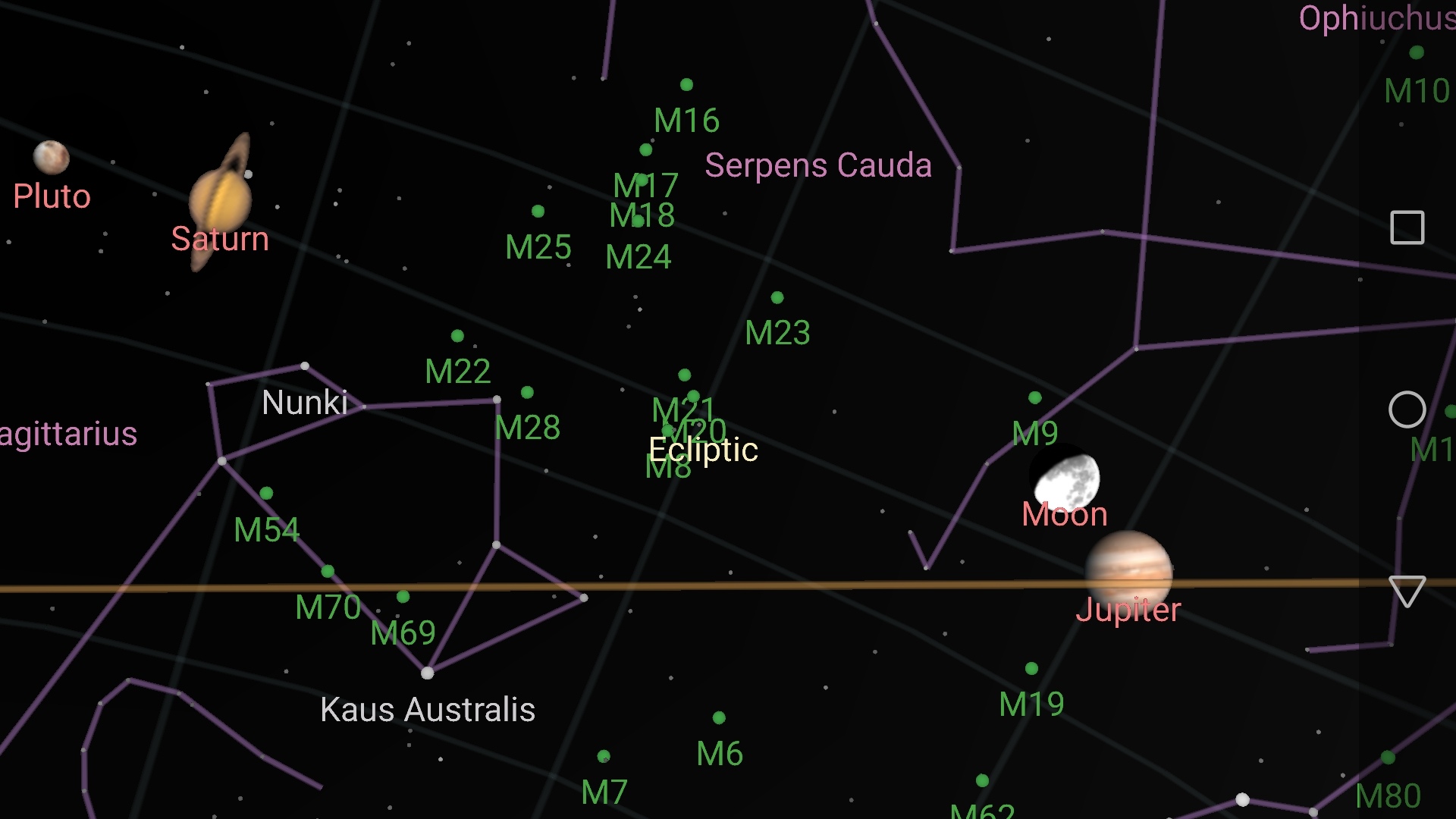 We are pleased to announce that our comrades from the Communist Party of Drakonia have chosen to associate with Communism Interstellar. We are aware of recent political tensions in the vicinity of Vodyanoa, so it is significant that the CPoD has adopted, and are both protected and constrained by CI's Articles of Association. In particular articles 7 and 8 which pertain to relationships with other political entities.

We are pleased to announce that our PC Squadron just reached 100 members and the PS4 passed the half-century a month or so ago.

I've updated the 1st post in this thread to reflect the termination of the Border Coalition treaty.

We are pleased to announce that all the territory lost to the Ghost Ship Navy has been liberated again. There are now 477 systems in the hands of their workers in the Egovii-Manite region [33 billion inhabitants]. There are now 639 systems protected by CI associated factions

When and how did the CI start?
Our official start date was November 16th 3300, as CIU, when our long-lost founder BEKTOP 3AREMOV put out a call for like-minded pilots to join him.


“Join us, help us unchain the galaxy and give all sentient beings a chance for better life and immortality. Our enemies are relentless, but for more than 1280 years we have thwarted all of their attempts to destroy us. Our cause is righteous! We will prevail!

Join us in the Great Communist Revolution, comrades!”


What is the main goal of the CI? If there is more than one, name highest priority
We aim to end all forms of slavery and put the means of production into the hands of the galaxy’s workforce. Primarily we do this via promoting Communist governments, but pragmatically we may also support other independent governments from the social group.


What “code” do you follow if any?
All members are required to sign up to our Articles of Association [AoA] which allow complete individual freedom but require absolute collective responsibility To paraphrase they say do no harm but take no faeces. As a rule we will not overthrow any supported faction unless there is an official state of war. CIU, ICU and now several other significant communist groups, including the Guardians of Harmony, the People’s Dictatorships Union, the Communist party of Drakonia and the Offworld Collective have signed up to the AoA. Between us, CI groups represent around 600 systems and we caretake 5 of the top 20 largest political entities in the known Galaxy.


What should a new recruit of your faction know before joining?
We hold absolutely to our ideal of all comrades being equal, so there is no hierarchy. Though most of us come from the political left, [unsurprisingly] there is no requirement to hold leftist views, provided you can meet our strict requirements for equality and tolerance.

How many pilots are in your group?
We have 150 pilots in our two main squadrons, though like most groups that will be a gross overestimate of the number of pilots who are actually active.


What are some of your pilot's favorite ships?
Individuals have different needs and preferences. To a first approximation, our politically active members fly Pythons for pragmatic purposes, whilst our combat pilots are often seen in a Krait Mk II.


What are some ways your group helps new pilots?
We will always share our knowledge, time and assets with anyone in need

What does the CI have to offer pilots who are looking to join?
We have a motto, to each according to their need, from each according to their ability and free time. We always have more to do than there is time and resources to complete, yet there is never any compulsion to do anything if you just want to chill. We are phenomenally well organised so if you do want to contribute to the cause, we can guarantee that your efforts will be leveraged to maximum effect.


What is something the CI does, but other groups may not?
We are one of the most active political groups in the game, and probably punch further above our weight than any other group. We are at the forefront of research into the way individual activities translate into political change within a system.

What is in store for the future of the CI?
We hope to connect our major centres of population through a network of liberated systems, Article 7 of the AoA permitting.

G
Hey! I'm looking to join up, anything else I should know?

Thanks to the return of a long lost Comrade, we can once again offer this amazing decal to any Full Member. 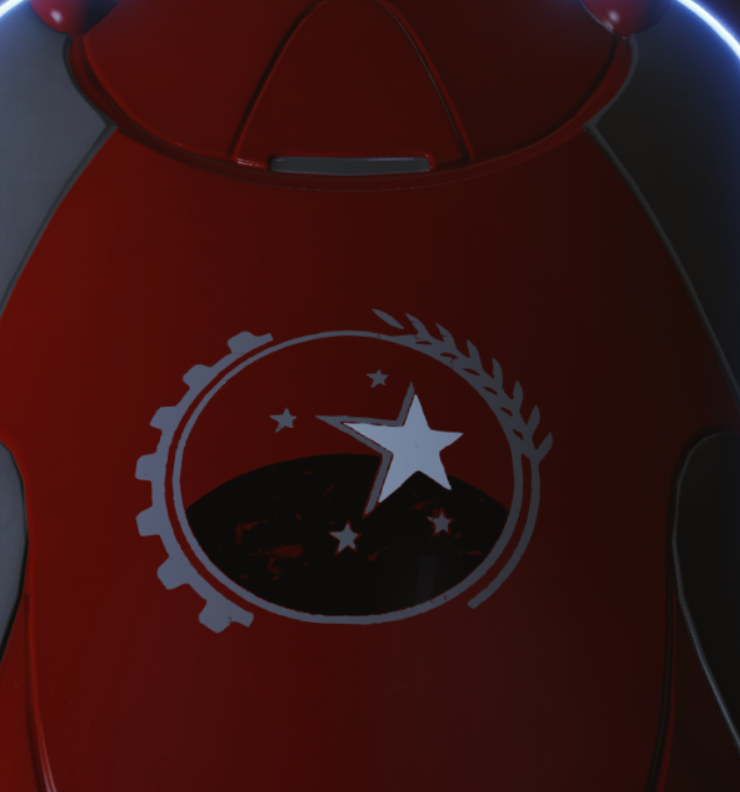 It was minted in recognition of the Interstellar Communist Union's contribution to the Dangerous Games. 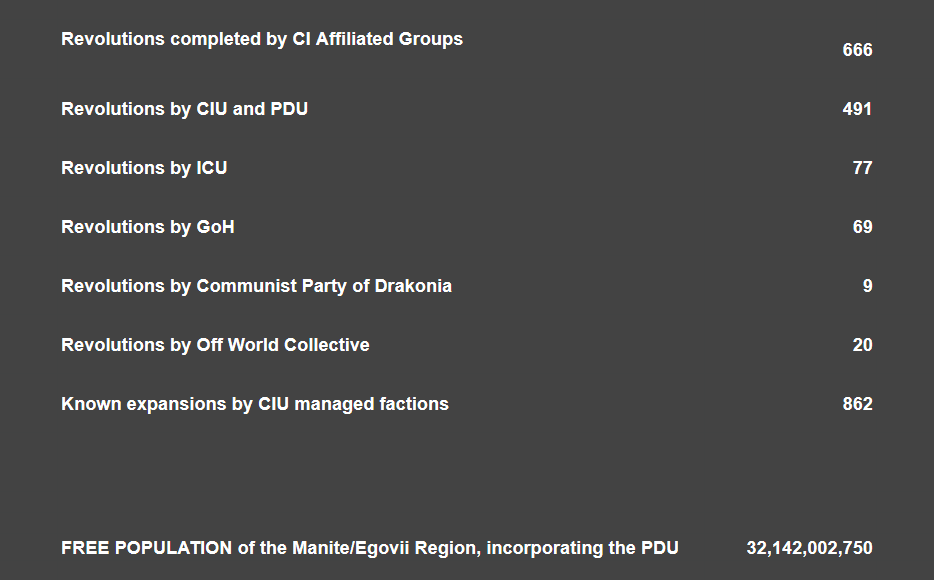 There is always something to do 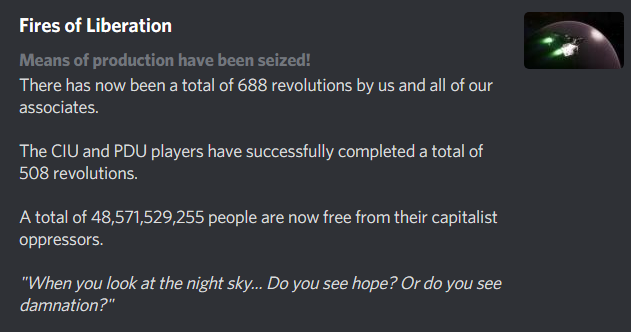 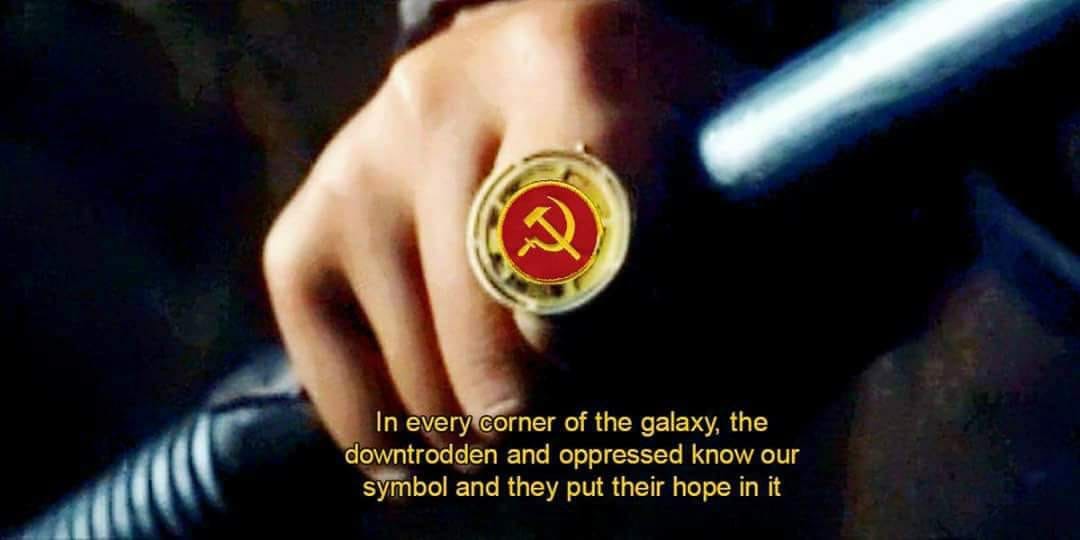