If you're interested in a customized panel / face-plate for the Thrustmaster Warthog HOTAS Throttle, labelled with your own controls and using the Warthog back-lighting (as seen below) then keep reading; I stopped procrastinating about requests to make my Warthog laser-cutting/etching template available 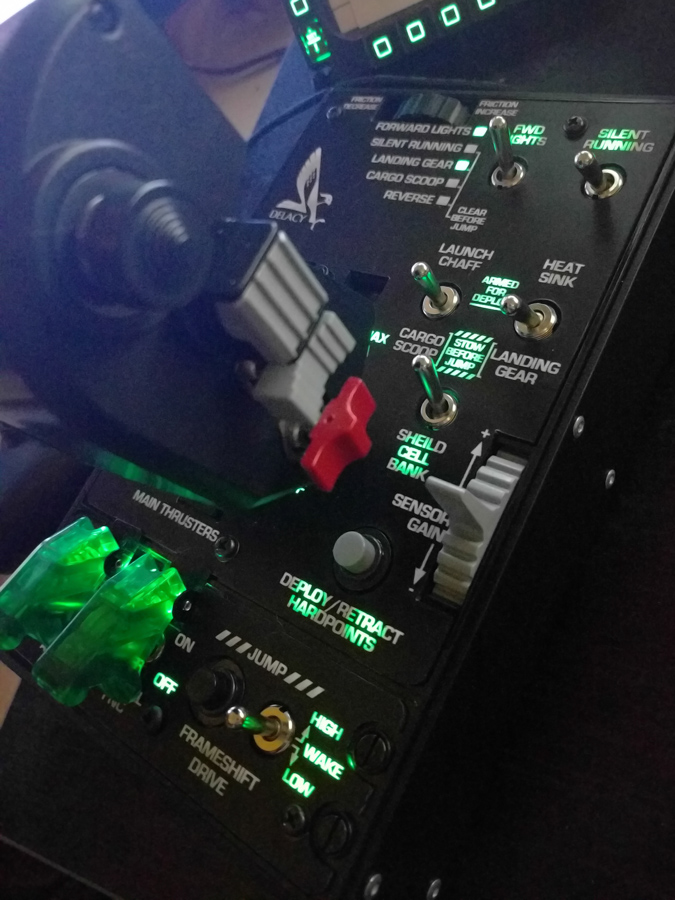 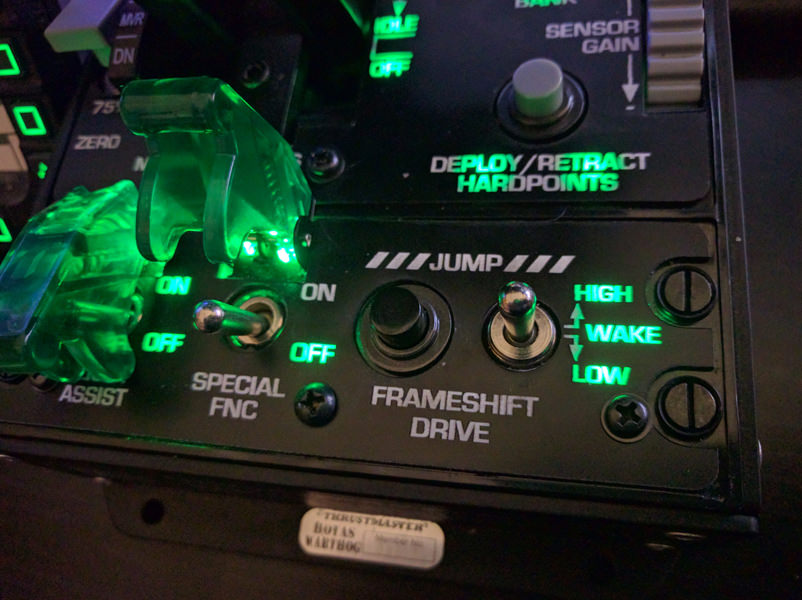 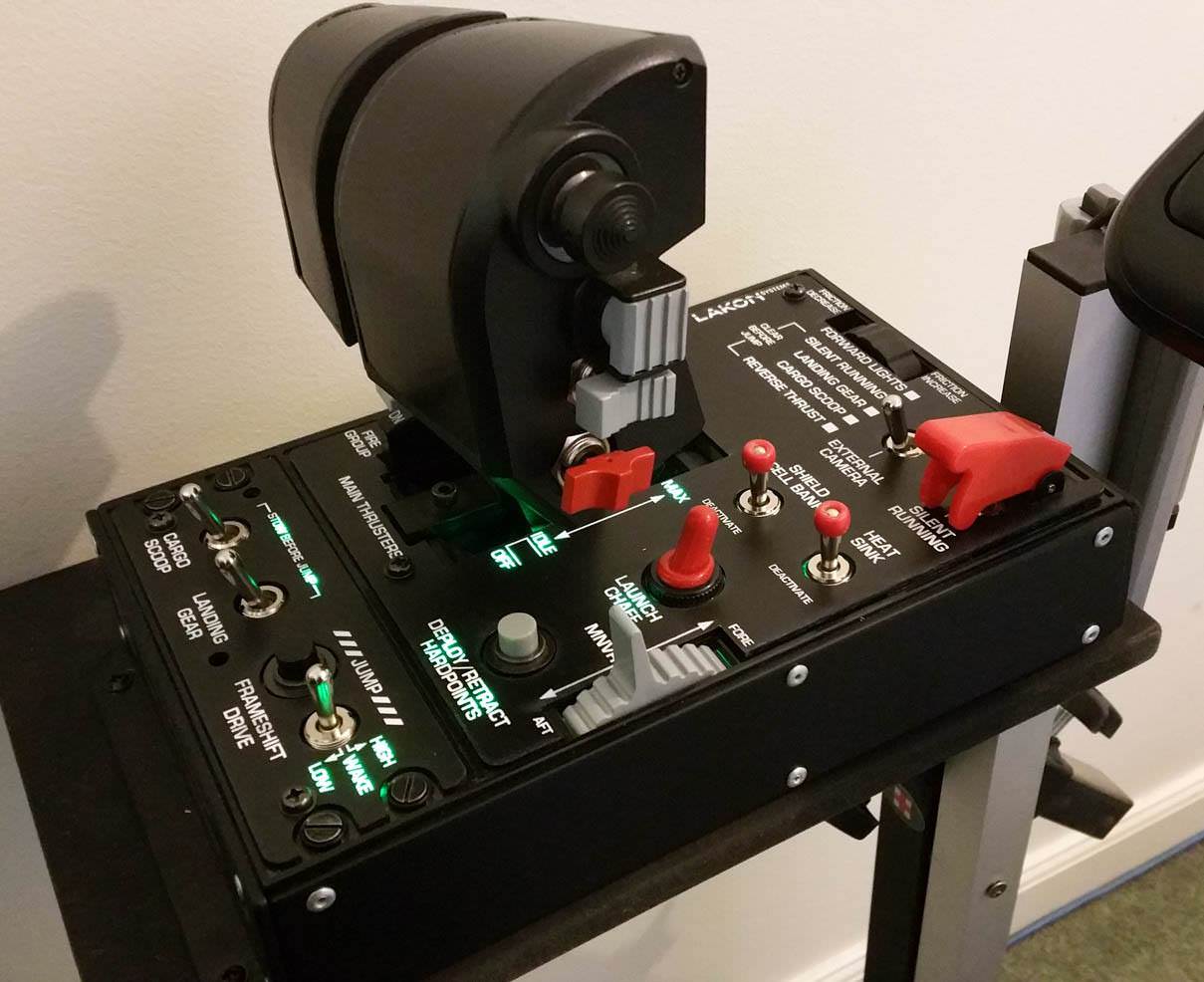 To make one of these requires laying out your desired controls labels on the cutting template using Inkscape (free drawing software) or Adobe Illustrator or similar, and roughly about $40-$100 to place the order at Ponoko (a laser-cutting service). The price depends on how many panels you want to cut and how much engraving (labeling) each has. Ponoko will also charge you $6 beforehand to get the template - that portion goes to me! (The template was a fair bit of work and I have no income right now, but if you like I can put whatever proceeds there might be towards supporting ongoing Elite development via Frontier store purchases )

If you're in the UK then shipping can get really expensive from Ponoko (which is based in the USA and New Zealand). The flip side is that apparently Ponoko is less expensive for cutting than many similar places. If you want to shop around, here are two in Europe to look into:


My Warthog template and more info WAS available at Ponoko, but they nolonger host files like that, so you'll have to email me for it until I find another host, and paypal the $6 to the same address: archvillain AT earthlink DOT net

The template has the panel cut-out lines, my own controls labels as examples (black lines and fill get etched instead of cut), and an orange guide layer (that you will eventually want to delete) which visibly shows the panel outline (the cutting lines are too thin to see very easily) as well as solid-orange markings showing you where the backlit areas are on the throttle so you can position your labels to take advantage of that:

(Ponoko also now offers a cheaper option where they just cut the pieces you want out of the sheet of material instead of charging you for the full sheet. I have not used this option so can't advise how to best take advantage of it.)

When the etched and cut panels arrive, the white core will be exposed in the etched text, and also on the sides where the panel is cut out of the sheet, so I used a sharpie marker pen to make the cut sides black like the front face, but that's personal preference.

I won't be able to help beyond this with people's projects, sorry. (I've got way too many things needing my time!) but if you have the time and money and inclination to give it a go, I recommend it.
Last edited: Today at 1:58 AM

Surprised you haven't gotten any replies yet, I suppose if you're not crying about a nerf or posting pictures of an Asp in front of something no one reads it, huh?

As a huge fan of the Warthog, and sim cockpits in general, this looks fantastic. I'd definitely like to get a copy of the template and will reach out directly for that. Any chance you would reply here with the details of the other mods, like the safety switches, rubber "knobs" on the 2 middle switches, etc?

Here's a quick shot of my setup BTW - would love to see the rest of yours, I love seeing what folks have done so I can stand on the shoulders of giants to build something for myself.

My setup, an older picture but 90% the same That’s very nice Cmdr. Looks totally professional. If I had a warthog I’d order one ! Good luck with this endeavour

Z
Impressive and such a great idea. I have the X55 Rhino so I'd have to do a new template but man that would be cool.

This is fantastic! i've just bought a copy of the plans, now to figure out how to customise it.

Do you happen to have the plans for sale of the "exact" plates you posted here?

Yorper said:
Do you happen to have the plans for sale of the "exact" plates you posted here?
Click to expand...

That one was made from my template, but slightly customized by someone else to match their control layout, so I don't have it. The template is the design seen in the top two images.

I've tried - several times - to buy your template... Each time it says "Doh! We didn't anticipate something. We've logged this error and will get fixing as soon as we can."
I've got my own cutter, so I don't really need much more than that. Do you have a paypal or equivalent so I could just send you the $6 directly? I can give you my email via pm, and you could send it my way.

If you're willing, that is.

I'm not sure what's up with that, sorry. If you send me your email, I can send you the template as an attachment.

P
I’d also love to buy your template but am also having issues with the site.

i also have a question about your layout. What is the purpose of the High/Low wake switch in the Frameshift section? Are you using it to switch between local super cruise and Frameshift jumps between systems?

D
Hi I have also tried to buy the files but getting error messages.can I pay you direct? Regards

So I think I've figured out the Ponoko error/problem. The fix is to create your Ponoko account before you buy, then the "buy files now" link seems to work. (You're supposed to be able to just click on buy and it has you make your account during the transaction process, but that leads to the error. Being already logged in when you click on it seems to work.)

Sorry about the mess, but hopefully that works!

i also have a question about your layout. What is the purpose of the High/Low wake switch in the Frameshift section? Are you using it to switch between local super cruise and Frameshift jumps between systems?
Click to expand...

Yes. By default, the Frameshift Drive button is contextural and will high-wake or low-wake depending on what you have targeted/selected, but you can also bind controls to only low-wake (ie regardless of whether you have another star system plotted), and likewise controls that only high-wake. So I have all three - the pushbutton is context-senstive, and the toggle switch which is specific..

P
That did the trick. I was able to purchase.

Thanks for the info on the switch setup as well!

C
Im sorry to resurrect this thread, I was interested in purchasing the template through Ponoko but it seems the link in this thread is no longer usable.

Until I find another place to host it, email me at archvillain (at) earthlink (dot) net, and I can send it as a mail attachment. You can paypal the $6 to the same email address. Sorry about that.