Purely tinfoil but I think there are multiple dark wheel bases and the codex entry drops multiple hints pointing to multiple bases. I was going after the Lyta Crane avenue this week and running into some trouble getting anywhere. My best guess so far is Crane maps to the Grus constellation of a crane and Lyta is the first star, A, in a LYT system.

The LYT systems are fairly rare. From previous snooping it's about 1/1,000 class L systems that match that. There aren't any class L systems in the Grus constellation but if there was a close by LYT system to a Grus star it would be suspicious. I don't think this base necessarily has to be orbiting a GG with 8 moons. It would be odd for a class L system to have one so any icy rocks would be worth searching. Otherwise the Y class star could almost be considered a GG but that's probably a stretch.

This system likely doesn't fit with the pic from the codex. There should be another system that maps to that.

Did anyone have luck searching this constellation? I'm sure others have gone this route before. Lyta Crane is such a weird name. Also when can we get access to her "extensive archive" of Dark Wheel info?

It also seems like there are two hard parts to finding TDW base: the system location and the station location within the system. From what we know TDW uses Orbis class stations. There are a few (informal) spectral classes of Orbis stations with the lowest power station being visible at only 50Ms. There's an example of that in Tionisla with the ING Ring. It's not clear what causes the variance in visibility but I think it's safe to assume that an Orbis station running on minimal power will be less visible than 50Ms.

Worst case scenario I think that a lower power Orbis station would have the visibility of a fleet carrier (that's invisible in supercruise) and no detection on sensors during supercruise. My hope is that it will show up on the sensors after getting close but I'm not sure that it will. The FSS might not pick it up, who knows?

The orbital distance of the Orbis stations can be checked by visiting stations in the bubble. From a rough estimate the station is likely 0.5ls - 2ls from the closest celestial body. I didn't scan very many stations for this so it could be off. The sensor range is usually pretty big though so hopefully just orbiting a planet would make it light up.

If it helps the codex picture should give enough info to approximate the station's orbital radius around the ice ball shown. I've been meaning to dig into this part but I've had other things going on. A hint is that the Orbis station is built with a standard size and the station rings have a standard size too.

Another path to take towards station hunting that I like a bit more is audio analysis. Stations and inhabited planets emit distinct audio which is different from the background noise of the system. The general approach (ganked from the Sag A thread) is to turn off all audio except sound effects. Then drop out to normal space and crank the volume up. I haven't gone through all the analysis to build the auditory radius for Orbis stations but that would be good to do. My hope is that this would be a standard size, independent of the station visibility. There's a reasonable chance that the station will only be detectable via audio if visibility and sensors don't work.

Whoops, those ING Ring numbers might be off on second look. I wrote down 50ms for some reason but the unit is Mm and the visible radius is more like 1.5Ls. That's going from some pics I took while experimenting with the visibility.

Have fun... There are a few big groups doing this search full time - Independent Raxxla Hunters for one.. 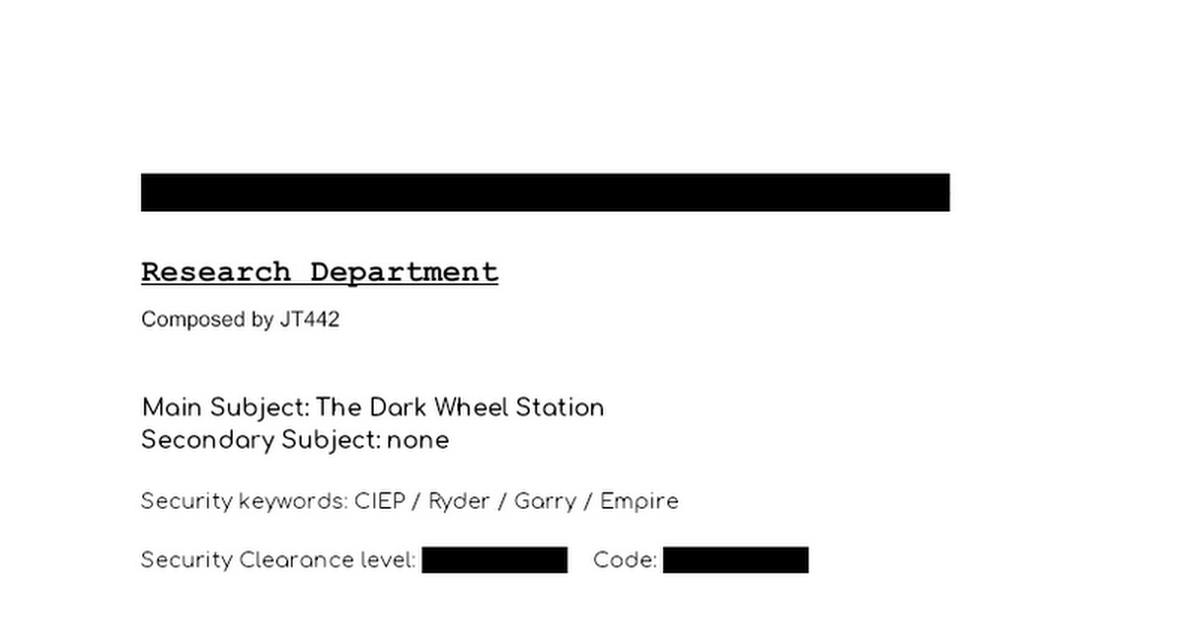 <If you don’t know who we are, you won’t find us> Research Department Composed by JT442 Main Subject: The Dark Wheel Station Secondary Subject: none Security keywords: CIEP / Ryder / Garry / Empire Security Clearance level: <REDACTED> Code: <REDACTED> The goal of this document is to dra...