Somehow I've never added my DBX to this thread. Not much I can say about this ship that hasn't already been said in the twenty preceding pages. I maintain a fleet of just ten ships, a self-imposed limit. So each ship that makes the cut must be useful, capable and serve a role. The DBX certainly does. I use it as my deep diver, and bubble runner. It's my transfer taxi too. For instance I recently moved to a new home after spending a couple years at my last home station. I use the DBX to return to the old home to grab a bigger more expensive ship, then whistle for the DBX, and fly back for another. Transfer costs are cheap on the DBX. I could afford to transfer them all lol, but I don't like burning it when I can come up with plans like this.

Due to the DBX's impressive jump I'll use it for things like engineering shield boosters for a new ship. Mount them on the DBX, fly it to Didi, and fly back to swap the finished boosters to the new ride.

Here's my Diamondback Explorer. Runs fairly cool, idles at 18% I think, could be cooler, but that works fine. Boost near 500. Jump near 65, depending on whether the rover is aboard. Some added integrity through a single 1D HRP, 'cause you never know!

Later today I plan to mount the new, unlocked FSD, put Mass Manager on it and see what happens. 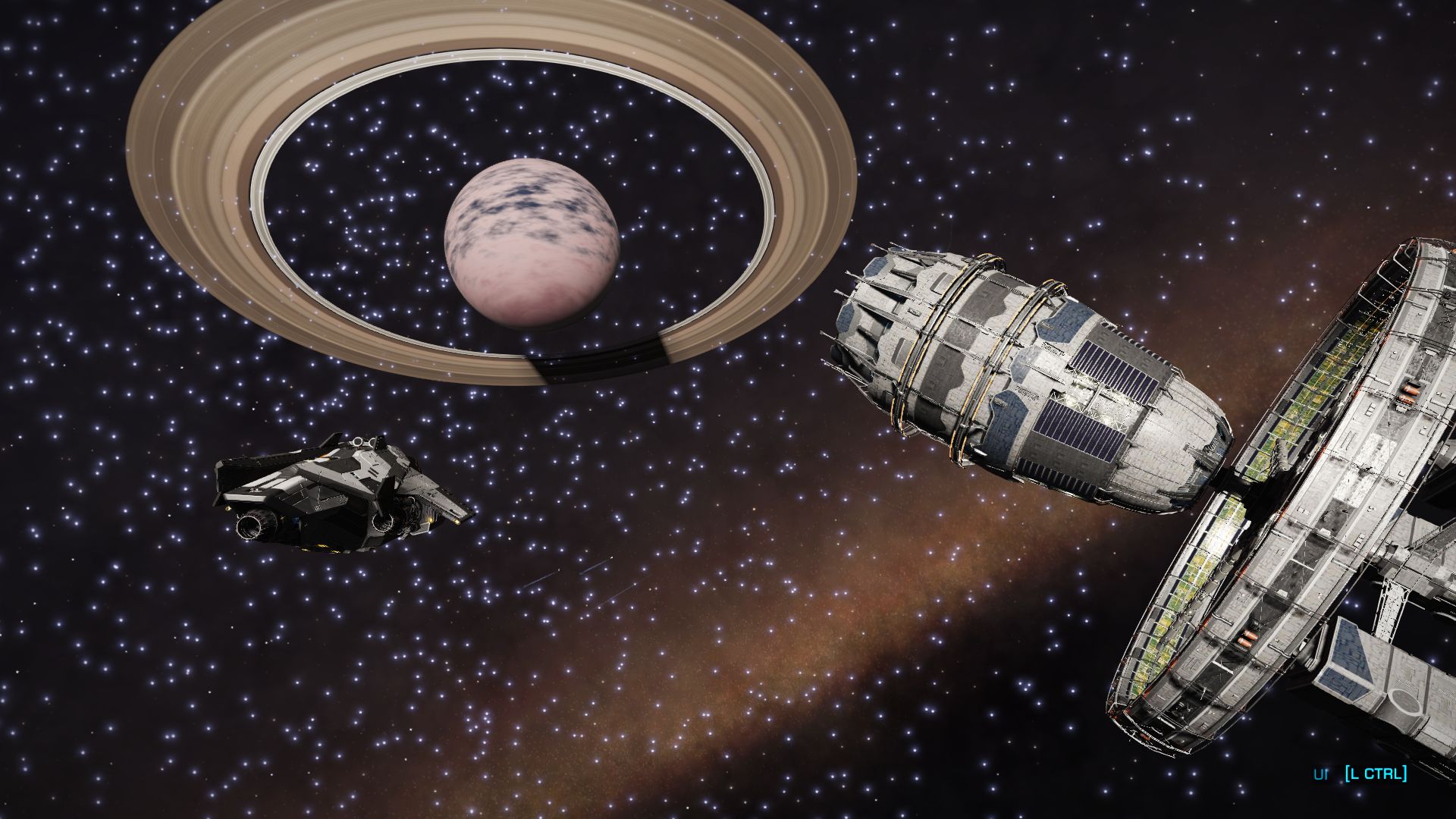 For those of you wise to the ways of the street, you know the phrase Mad Hops means having exceptional jumping ability. My DBX shares the name, and for that reason. Mine isn't exceptional, but it does hop madder than any other ship I own. I flew this one to Colonia last year, about 29 thousand light years the way the drunk crow flies. And back too, of course, much more soberly. Fitted out for that trip, or the way I see fit, she had a jump range of 64 and change. Over time she had gained some weight, as they tend to do through the years. I remember when we first met, and I had taken her out to the engineers, and she jumped 70. But that one had little on it, and anyway was too slow dammit. D-rated thrusters lasted about 2 hours, and half of that was spent engineering them. First time I flew it out after, I hit boost, looked back at the station, and it was still about the same spot haha. No no no. That was the last time I used non-As in any ship.

And then I thought about how I would use it. It's going to be one of the fastest DBX's around (500 Coriolis-world boost), but I also need it to survive. So class 4 shields, even if they are Ds, and engineered as they are, weigh just 2t. And of course what is a DBX without a rover? And that integrity could use a boost. HD/DP HRP. And before long 70 jump was but a memory. With enough stuff dropped maybe it would come close. But then it wouldn't be mission-capable, instead some ideal that never got flown that way. I would still toss out the occasional "my 70 jump DBX", even if that was only what it showed on max. And claiming max is like the skydiver bragging about his free fall velocity one foot above the ground. OK, well not like that, it seemed more clever before I wrote it. But who jumps 70 light years on an empty tank? Dead skydivers, that's who. I made it work.

But thisclose to 65 jump range is good enough. Really it is. 70 though has a mystique to it, like shooting 63 at the Masters.

Then one day, actually yesterday, I walked in to a tech broker. Wasn't expecting to find anything, I never have before. But this time was different. Right there in front of me was the Class 5 Double Engineered Long Range Fast Boot FSD that was part of a CG I don't think I participated in. I had scoffed at it, as why would I need fast boot right? That's for min-max PvPers. And it costs mats, not money. You do not unlock it per se, you buy one with mats. Want a second one? Spend more mats. Want eight, lots of mats. Not cheap ones either. So I bought it, of course I did. Then I noticed what I had failed to already know. Fast Boot is not an experimental (double engineered!), and it has a higher optimal mass! It's not just long-range, it's longer-range. How did I not know this? So this means I can still add mass manager, keep the fast boot and get a better FSD than engineering allows. Yes please.

It just appears in your module storage. Do not buy one without the room! Bunch of hoarders 'round here, so this is possible haha. So tonight the first thing I did was swap to Mad Hops. What else? Installed the new FSD and flew to Felicity's shop. Added Mass Manager and boom, 70 light years jump. It took two jumps to get there, but only one to fly back. Some how the rover fell out, and I present the Madder Hops.

This thing has 71 (unladen) jump

I have ten ships in my fleet as mentioned and six of them have class 5 FSDs. Orca, DBX, and four Kraits haha. I guess most of the people reading this already knew what this FSD was, but I didn't. Not only am I glad I walked in to the tech broker, but that I had the mats!

Sometime later.... took my iEagle wake scanner out to scan some DWEs, but that was too slow, so flew to the Jameson Cobra to fill up on G5 encoded then traded enough to have 20 DWEs and bought two more of these. They do have higher mass, thermal load and power draw, plus lower integrity, according to the description, but the only differences I see are the 2s boot time, lower integrity, 16% higher thermal load and 8% higher optimal mass. Mass and power are the same. According to EDSY at least, idle is unchanged, still at 14%. I said 18% earlier but that was incorrect. FSD temp does increase four points, from 51 to 55%. For this sort of optimal mass increase it seems well worth the minor drawbacks. Going to try it in the Orca and one of the Kraits.
Last edited: Mar 4, 2021

sinisalo said:
I just happened to click on a tech trader yesterday and saw a Engineered Class 5 FSD V1. This is the one with fast boot on it. I unlocked it because of course I did. I don't recall participating in whatever got it for me, but who cares haha. Is this the same one gthk? I was also thinking about putting it in my DBX with Mass Manager. hmmm
Click to expand...

Yes, it is the one I mentioned. I got one free because I have join CG of delivery rare goods last time and unlock 2 more for my DBX and ASPX.

Just to throw the DBX build I currently have here. My goal was to hit 80ly (Max) and still be usable, and i hit it exactly (74.29 unladen)
DBX80

Couple of notes. An armoured A rated power plant seems counter intuitive for a max jump build but D rated only saved me 0.5t and would have meant going overchargerd making the already flimsy integrity even weaker (a concern given its the only module i cant repair myself). Armoured more than doubles the integrity as well as an extra 12% power output which is 'just' what I need to make it work. (Stripped down mitigates the extra weight a bit too)

The point defence is an optional extra for guardian site farming. I only left it on because it makes me hit my target of 80ly Max 'exactly' and the satisfaction that gives me means more than the 0.01ly range increase . Theres power for a 1D mining laser too if you power down the AMFU

I started out looking to do an Asp or Phantom build but honestly the DBX does everything I want at a fraction of the price with a longer jump range, so im in the club

P
This is mine -- pretty stripped down as you can see! The scoop is a perennial issue with the diamondback, but there is something to be said for "exploration minimalism" -- it has just enough space to fit everything (the only "mild luxury" I wish I could add is supercruise assist). And that jump range!

I wish they would put in weight reduction engineering for repair limpet controllers, too.
Last edited: Mar 22, 2021

i'm playing as a trader who is moving restless through the Bubble, i usually travel with 2 ships, my armed trader vessel, a Python called 'Tramp' (https://s.orbis.zone/dslq) and my DBX named 'Camillo' (https://s.orbis.zone/dslt).
Because i take on any fight i got offered when i run the missions, i quite often have to synthesize the 30%+ small calibre ammunition.
That means i'm quite often in need for the materials like Zirconium etc..
The DBX i do use for surface prospecting, exploring the neighbourhood for actual prizes/stock of commodities , running courier missions, searching USS and to do anything the Python is to big.
Because i quite often transport some stuff picked up when surface prospecting, i also get raided. And the DBX is like 'Camillo' was, a small dog (just below 20kg), but with really muscles, not looking for a fight but if, then he could stand on its own. The DBX with its 3 well placed slots can deliver quite a lot of punch. The class 3 beam strips of the shields an the 2 Multi Cannons with the pimped up ammunition takes care of the rest.
And if the opponent is to strong, some pips from weapons to engines and there i go.
Because it has a jump range of almost ~380ly i don't need a Fuel Scoop. The best planet for the needed materials is 150ly away, 3 jumps i'm there and i don't even have to refuel.
With that style of playing i just need the 2 mentioned ships.
Of course there are a couple more ships stored, a Krait Phantom for exploring, a FDL for fighting but no ship that needs a big landing pad.
You must log in or register to reply here.
Share:
Facebook Twitter Reddit WhatsApp Email Share Link
Top Bottom