Community Event / Creation Dirty Work - Based on the Palin Missions

The yellow ichor of something slid down the bubble canopy of the SRV. With a disgusted expression, Commander Duncan ‘Mac’ MacTaggert, operated the canopy wipers.

‘Is that what she said?’

Mac chose to ignoring his co-pilot’s ty comment. He gritted his teeth as the wipers made a pitiful effort to clear the unknown liquid from in front of him.

‘This stuff is so fluxing sticky,’ He muttered to himself.

‘Again,’ David ‘Davie’ Thorton sounded almost gleeful over the comms. ‘Is that what she…’

‘All Right!’ Mac said, cutting off his co-pilot off before he could finish.

Mac had forgotten that ship comms were on and everyone on that ship could probably hear anything he said, not matter how quiet. He knew that Davie loved to slip in a double entendre any chance he had. Mac sighed and was thankful he hadn’t said that out loud.

‘This is tricky,’ Mac said in an apologetic tone. ‘I just need to concentrate.’

Mac realised that Davie will just have to get over his sharpness, it wasn’t as if he was under enough stress at this moment in time. Not for the first time, he wondered how the hell he’d ended up in the middle of an alien structure, looking for biological material to return to a Mad Professor in the Maia system.

A few months ago, he and his crew of the Asp Explorer vessel Sanctimonious, had been among the first few to discover a Federal fleet which had completely wiped out by unknown weapons. Two Farragut Battlecruisers, the mightiest vessels that humankind had ever produced, had been destroyed by some kind of corrosive weapon. Every one of their escort ships was burning and dissolving before the crew’s eyes.

The obvious answer would have been the Empire had developed something new and had covertly tested it against their long-time rivals. However, there was a surviving beacon. One small radio message that would affect every single one of the billions of humans in the known galaxy. A simple relay saying ‘Thargoids Return’ spelt out in the phonetic alphabet.

The effect in the known galaxy had ranged from utter panic, with commanders trying to run the hazardous Twenty thousand light years to the newly created Colonia settlements, to what could only have been described as a general shrug of the shoulders. Maybe they believed that the if not just the Federation, then both the Federation and Empire would be able to deal with this menace.

The one big change had been the public’s reaction to some of the cranks who had been warning about Thargoids for years. One of the reasons the professor had moved to Maia was to carry on his research in peace away from the interference of the authorities and the ridicule of his peers. Now Professor Palin was considered a leading expert on Thargoid technology and he had put out a call for Thargoid material to research.

Davie, Mac and the Sanctimonious’ third crew member Mooka had decided to help Palin instead of running like most people who had seen that Federal Fleet dissolve. Mac still considered him a bit of a crank but, as far as he was concerned, a crank on their side. Davie still considered him a full-blown nut job but had gone along with it anyway.

Unknown ships, organic and looking like massive green orchids, had been pulling ships out of hyperspace for almost a year now. They would scan their captive and then move on; not even responding if fired upon. These same ships were seen interacting with the planetary alien structures known as barnacles and then these massive organic structures had appeared on airless planets and moons all around the Pleiades sector. Everyone thought of these as Thargoid now.

The ‘Canonn’ Science community had gone into feverish overdrive and managed to map over 200 of these sites. This had led to the one which Mac was diving through, looking for ‘things’ to scavenge. There had been a trick to get inside the structure, you needed an unknown alien probe to open its doors. Those had been appearing around ammonia atmosphere worlds for the last couple of years but whatever weird energy they used, would rot a ship from the inside if you carried them.

The meant that in order to carry those probes, you needed to be in Professor Palin’s good books so he’d sell you some special cargo pods which could carry these probes without your ship falling apart before you got to the alien base. This was Mac’s third run into the base and they’d managed to find three egg-like containers that matched what the Professor had wanted. Dave had done one but he had come back in such a state that Mac thought he wouldn’t be able to cope with a second run.

The yellow gunk was not coming off, no matter how many times he switched the settings. He was just about to set off again when something just passed in front of the SRV.

‘What?’ Mooka’s voice came over the comms. ‘Are you alright Boss?’

The concern in the young ex-Imperials voice was touching. He hoped she was not g out by all this.

He was trying to sound reassuring even though his heart was trying to pound itself out of his chest. He wasn’t entirely sure he succeeded. A dark green shape moved away from the SRV. Pointed at the front like an old earth speed boat with bird like tail at the rear, it moved away as if the SRV wasn’t there.

‘It’s was just one of those scavenger things,’ Mac reassured. ‘Got a bit too close.’

Mac tried the wipers again. Surprisingly, it moved most of the gunk out of the way on the first try. He put the SRV into gear and started to move again, the cockpit filling with the whine of the drive system.

There were several of these, what the Cannon group had named, ‘Scavengers’, flying about. People couldn’t decide whether they were recycling the base or building it, as they hovered about sampling parts of the structure in one place and then appearing to puke up the samples somewhere else. The only other note Canonn had left was ‘Don’t touch them’. The computer pinged in front of him as the scanner highlighted a match to Palin’s requirements.

Mac drove the SRV down a massive alien passageway. It gave him the impression he was driving down a massive ribcage. Bone-like structures with a green flesh filler between them made up the walls and seemed to weep the yellow substance onto the floor. It made Mac feel that the entire structure was ill. Ill and dying or ill and recovering, he couldn’t tell.

At least the passageway was wide enough for at least two SRVs to pass without touching. It made dodging the ‘Scavengers’ easy enough and after turning a corner he spotted a passageway to the left. Turning the SRV around the corner, a smaller passageway lead to an internal chamber. Three long glowing pipes gave light and the computer highlighted what looked like a capsule on the floor in front of one.

He lowered the SRV’s cargo scoop and slowly manoeuvred the transport to line up the scoop with the capsule. He drove the SRV over the capsule and the scoop picked it up.

If the base had cared about this capsule being taken, there was no response. He turned the SRV around and headed out of the chamber. He hadn’t realised that his hands were shaking until he tried to wipe his brow when the SRV was almost knocked through the wall by a scavenger. He hadn’t seen it come around the corner.

Immediately he saw the scavenger’s threat marker turn red. It lined up with the SRV and fired some kind of green gunk. It impacted on the SRV’s Shields, knocking an entire ring off the three rings representing the shields strength on the HUD.

‘Flux, Flux, Flux,’ He yelled, as he gunned the transport’s engine.

The Scavenger lined up and fired again. Mac was already moving, reversing left and the globule splatted against the wall. He flipped the drive mode and pushed the throttle fully open. The SRV skipped forward, leaving the Scavenger in his wake as he got past it. Quickly distributing the power between the engine and shields, he bounced the SRV down the corridor.

‘Clipped a Scavenger,’ Mac replied urgently. ‘Get ready for an emergency take off.’

Mac grimaced as Davie knew that kind of response, wound him up. He also knew that scavenger was after him. Two other scavengers appeared in front of him with their threat levels also in the red, he knew he was in trouble. He fired a quick burst of the wheel rockets, lifting him above the two alien machines. They both fired, the green blobs hitting the perusing scavenger, but Mac wasn’t interested in seeing the effect.

He drifted the SRV around the corner and headed straight for the sphincter like exit. It opened with such urgency, Mac had the feeling he was being treated like diarrhea. The scanner started to pulse with red contacts all around the base. The squat shape of the Sanctimonious was only a couple of hundred meters away. He ejected the probe, there wouldn’t be enough space in the protected cargo hold to keep it.

Fire spewed from the front of the Asp Explorer.

‘What the flux?’ Came out unbidden from Mac's mouth.

‘I’m aiming for the Scavengers,’ replies Mooka’s voice over the comms.

The shots were coming unnervingly close. Still, he didn’t look back to see what his ship’s gun turrets were going to those things. He pulled a sliding brake turn underneath his ship. The little transport slipped under the landing bay. He activated the boarding controls with shaking hands. The SRV was yanked up into the ship although Mac felt his stomach had been left on the planet’s surface. He felt the Sanctimonious lift before he got out of the cockpit.

Gravity was still usable here, no need to use the mag boot settings. He ran up to the upper cockpit, past Mooka who was directing fire to the planet’s surface, and strapped himself into the seat behind Davie in the pilot’s seat. There was a minute of boosted thrust as the Sanctimonious tore into the sky.

Mac breathed out hard, managing to keep the contents of his stomach down.

‘I am never going down a hole like that again,’ He announced.

‘Is that what she said?’ asked Davie.

Down in the lower cockpit, Mooka thought she heard some kind of punching sound from upstairs. She paid it no heed as the Asp Explorer powered for space.

Allow me to provide some illustrations for you ... 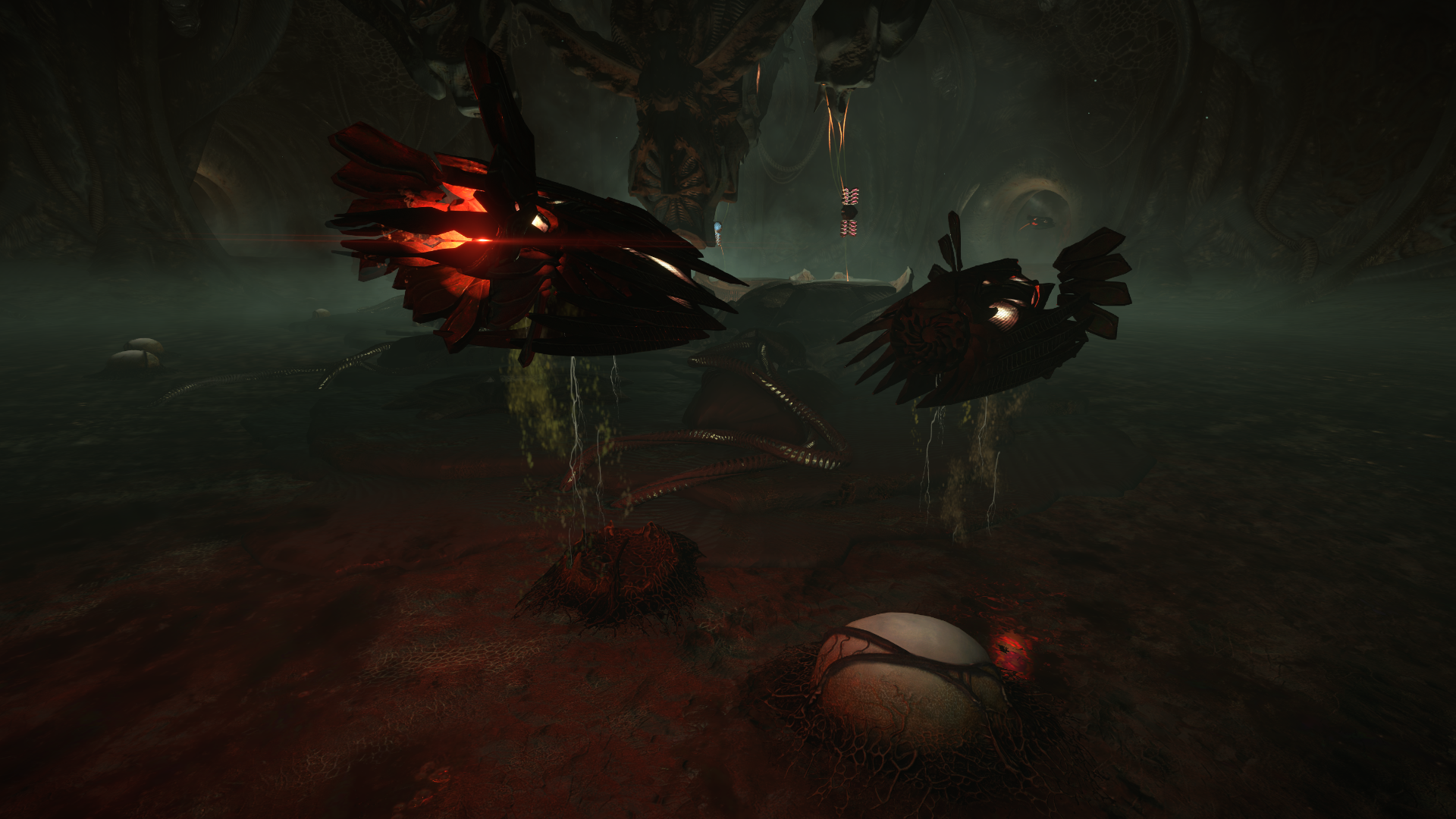 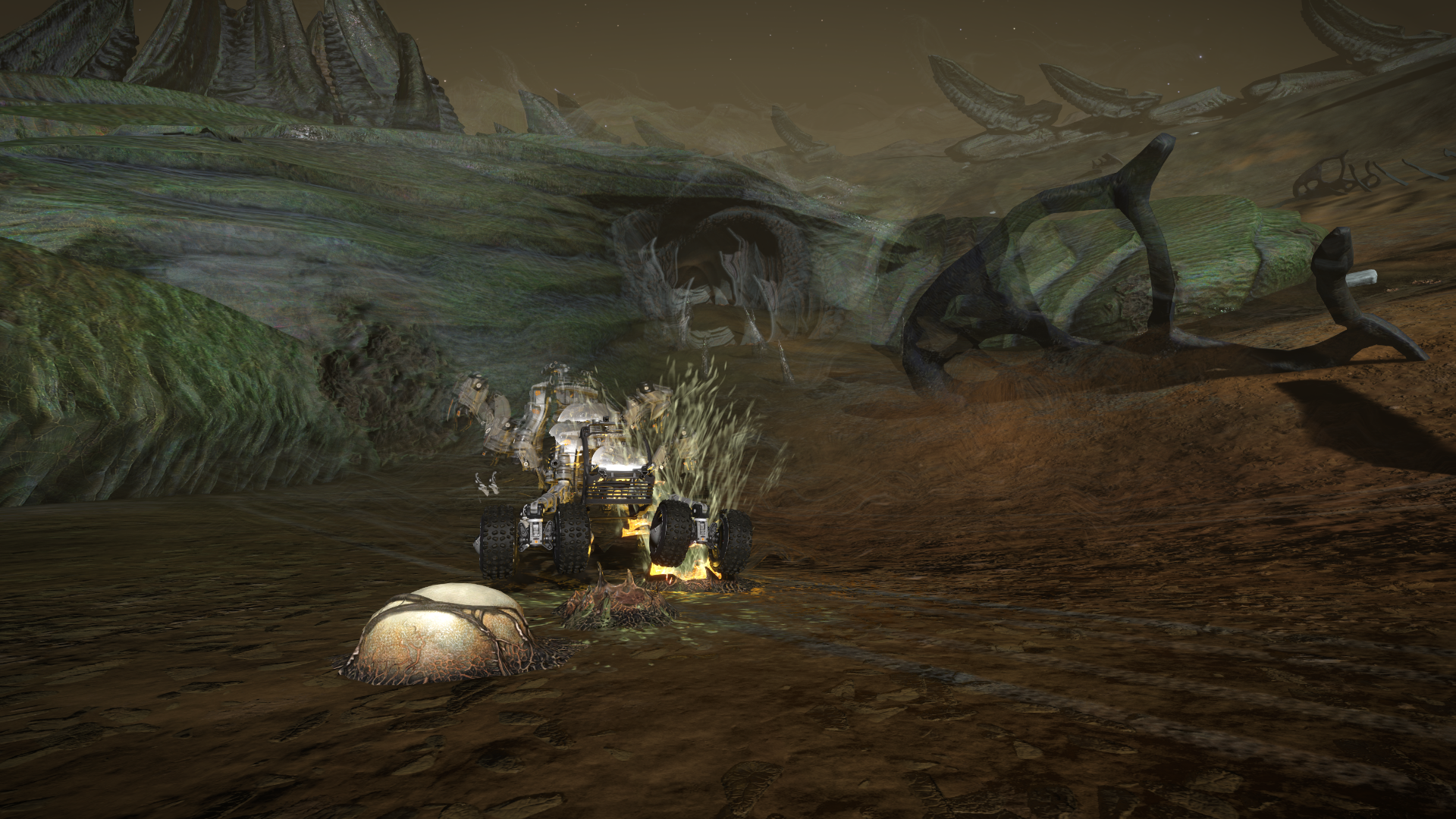