Have to say, I do love reading these stories of pilots who had never gone anywhere, and then decided to travel the entire width of the galaxy. It's kind of crazy, but also wonderful. I doff my cap to you all!

N
It's been a wild ride. I started preparing for this journey as my beloved golden retriever was slowly dying. I thought it would be a fitting memorial to him, and to my sweet shoulder-sitting cat that had been run over a year prior. I had only just joined the game toward the end of 2018, so it was a flurry of preparation to unlock engineers and the FSD booster, but I made it and left a few hours late in my 51 LY Krait Mk2, the DSV Marleva (dog was Marley, cat was Eva). We always said Marley didn't know anything about strangers, just friends he hadn't met yet. Even when age took away his sight and agility, his gait hobbled by arthritis, he still somehow found his way down the hall to curl up by my bed each night until the end. Eva was a wild spirit, insatiably curious yet utterly devoted. She'd sleep on my side each night, sit on my shoulder at the computer, and even sneak outside to join me grilling or to greet me coming home from work.

Even though I'd never been more than 1.3k from the bubble I wanted to make a memorial trip, but kept second-guessing myself. I switched ships a couple times along the way, then suicided back to the bubble from Rohini to quickly rep grind and switch to a Clipper. I did, and flew it happily to Colonia...then switched to an Anaconda, which I flew to Polo Harbour until an unfortunate accident with a neutron star and me hitting J without it quite having been boosted yet. This resulted in a drop from SC inside the jet, and an interesting and frantic few minutes. Lost the canopy, and it was interesting making it a few thousand LY to safety on D-rated life support, synthesizing as needed. Shout out to CrimsonGamer99, without whose crazy exploits in his Adder (flying to BP with no canopy ever) I might not've even thought of synthing.

Fiddled indecisively with an Orca, among other things, back in Colonia before finally settling on a more heavily engineered version of the Mk2, and setting out for the core, just one waypoint behind the fleet in spite of my time lost. But partway there, I got caught in a combination of space madness and grief for my lost companions and friends. I buckyballed, didn't land at Explorer's Anchorage, went almost 3k LY straight up...and self-destructed. I returned to the bubble, sold everything, got rid of the money, and started over after that cathartic self-immolation. (not completely, I didn't want to unlock engineers and guardian tech all over again)

I spent a few weeks flitting around the bubble in different small ships, trying new things and renewing myself, in a way. And I found that I kept fiddling with ship loadouts...to see what kind of explorer my small, cheap ships would make. Took a few 1k LY trips in a Dolphin. Learned about the memorial to Zy at Beagle Point, and wanted to go but figured I would go some other time. There was no way I could catch back up to DW2 again.

Then we lost another member of our animal family.

We adopted Jake when he was not even quite old enough to be weaned, abandoned by his human (if he'd had one) and his mother alike in an alley behind a store. He could fit in my hand at the time. Half-feral, it was a couple of years before he really learned that humans were ok. I still remember being at my computer when he walked up to me and reached out with one paw for pats, the first time he'd ever actually sought out attention. He ended up really adopting my nephew, though, loudly yowling to his favorite human to come see his latest prey (usually a sock or underwear). Well over a decade later, when he was having trouble walking he would still claw his way up the side of his bed to sit on the pillow next to him until he woke up. Until cancer claimed him just a few weeks ago.

A combination of that, and seeing that the fleet would officially be at Beagle Point until early June, decided it. I would set up another ship, and this time go all the way. Since concatenating three names would've been weird, I chose "Sodalis Animus", which in what is no doubt heavily butchered Latin supposedly means something like "dear companion spirit". I made a 60-LY Orca, and set off. I spent a day in Colonia switching to and engineering a 62-LY Phantom, and was at the core just a week after setting out.

That was five days ago. I visited the memorial and then landed on Beagle Point 2 earlier today. My journey is complete, my memorial pilgrimage over, my ghosts honored, as it were. Maybe it's appropriate I switched to a Phantom to finish the journey, after all. 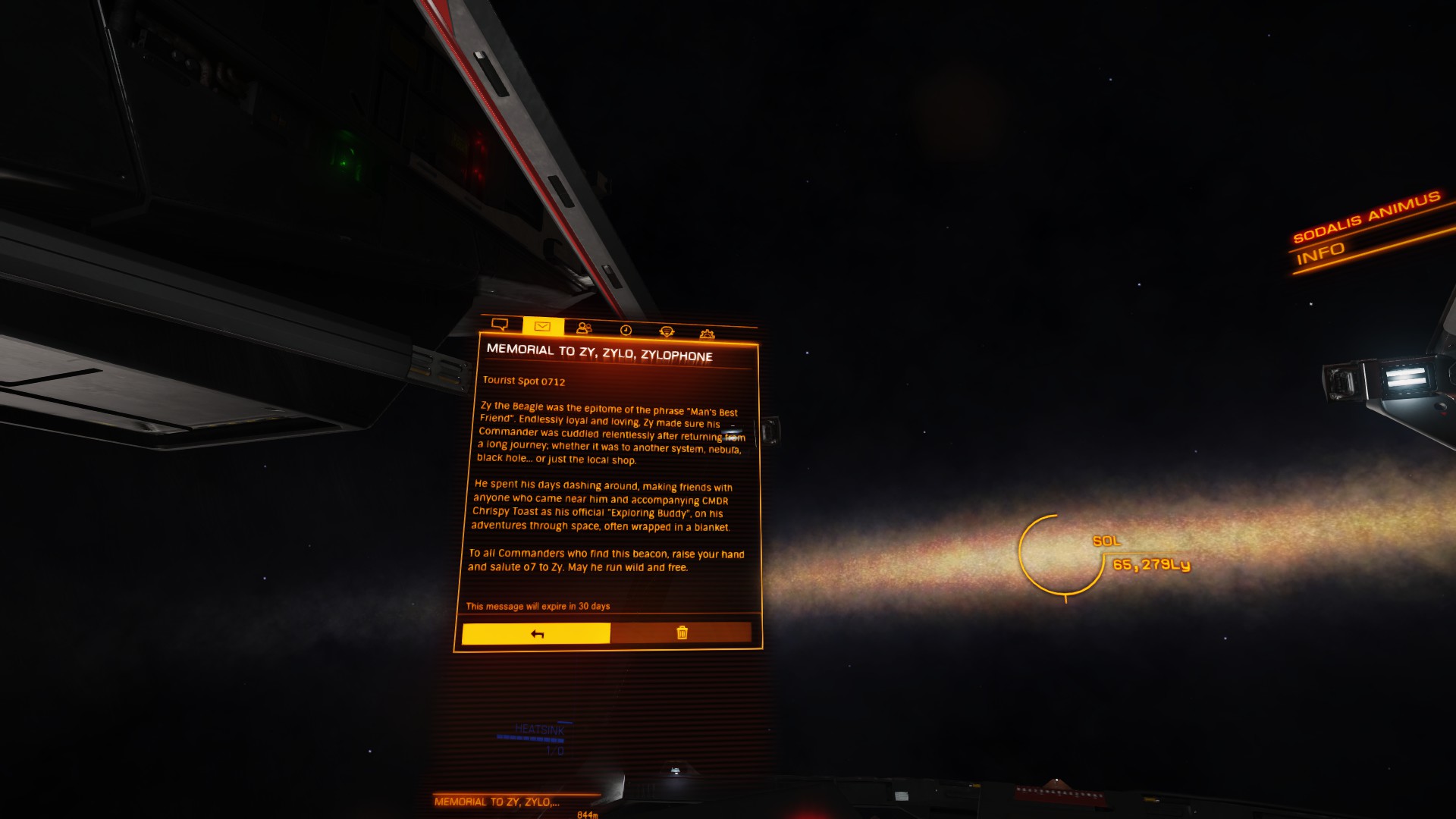 But no self-destruction this time. No virtual suicide. This time, I'm going home. 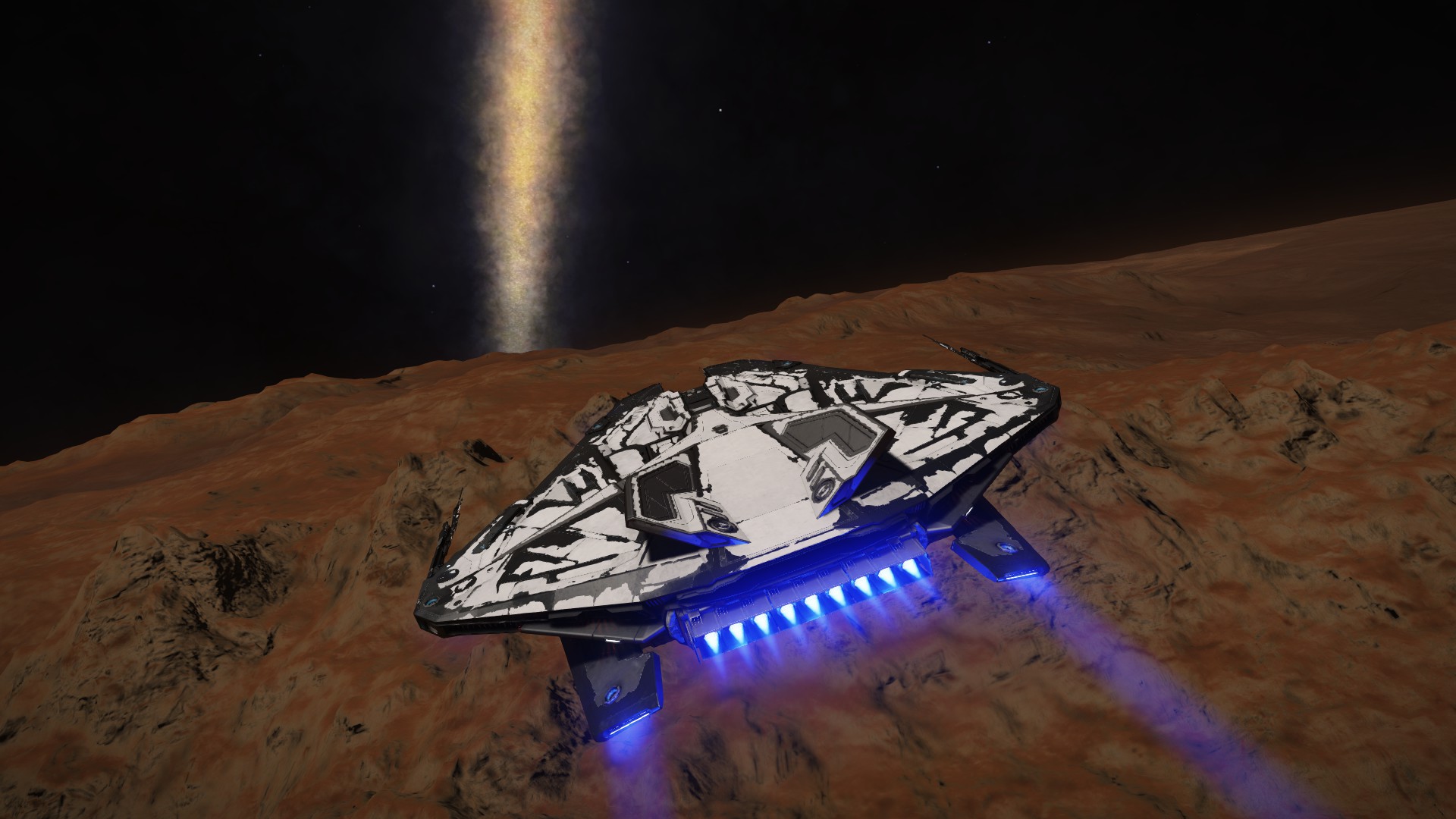 Well, Salome's Reach, THEN home. I'll rejoin my beloved friends somewhere beyond the stars, when the time comes.

I can finaly say I made it to beagle point

M
Made it to Beagle Point finally!!

Going to stay for a few days at base camp if anyone on PS4 would like to meet up for a screenshot or some in-game conversation. Just shoot me a PS4 friend request and message.

Thank you so much to all of the organizers, especially allcrowsareblack and CDR_WillTRiker on PS4 for doing a great job!

Thanks everyone for this fantastic journey! I'm so happy to have arrived at Beagles Point. It's a long way back home now. See ya'll in the Void!

It's been a wonderful journey, my first expedition. Seen some impressive sights, flew through some stars, even made my first neutron jumps for a short time. So glad I joined.
Now I can take a leisurely trip back to human space over the course of the next few months

None of it would have been possible without the tremendous organisation, so my greatest thanks to all who were involved with that. And thanks also to Qohen Leth for my DW2 patch, it is a lovely thing that will take pride of place on my rucksack 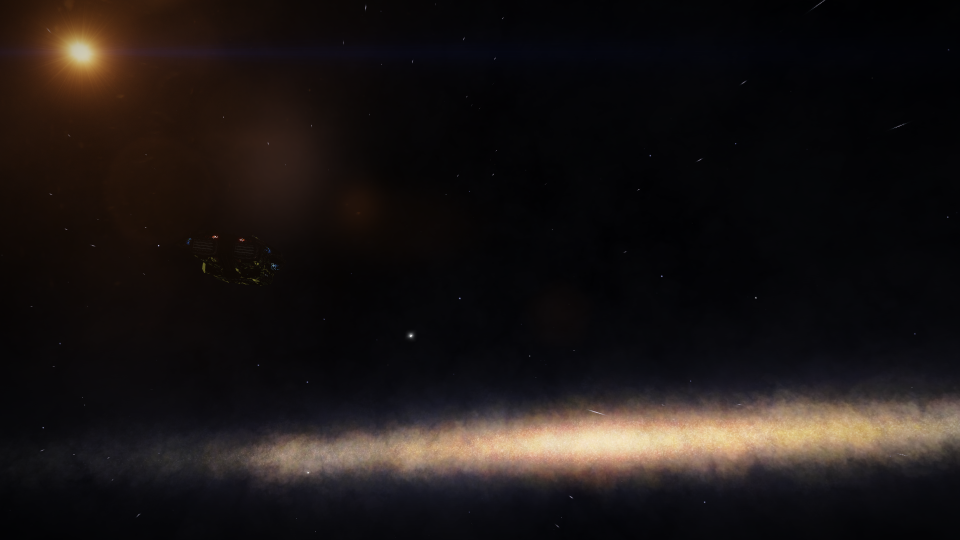 That was a really nice expedition !
DW2 was my 3rd trip to beagle point, i hope next time we'll have some automated station or ground outpost with basics for explorers (refill, repair, livery)
i'm soooo close to 1M Ly badge <3

See you in the black, fly safe !

First Ride to Beagle Point, I'd been as far as Colonia before Space Madness set in before, but today, I made it finally to Beagle Point. My Cutter's paintjob has seen better days, but it was one heck of a ride. 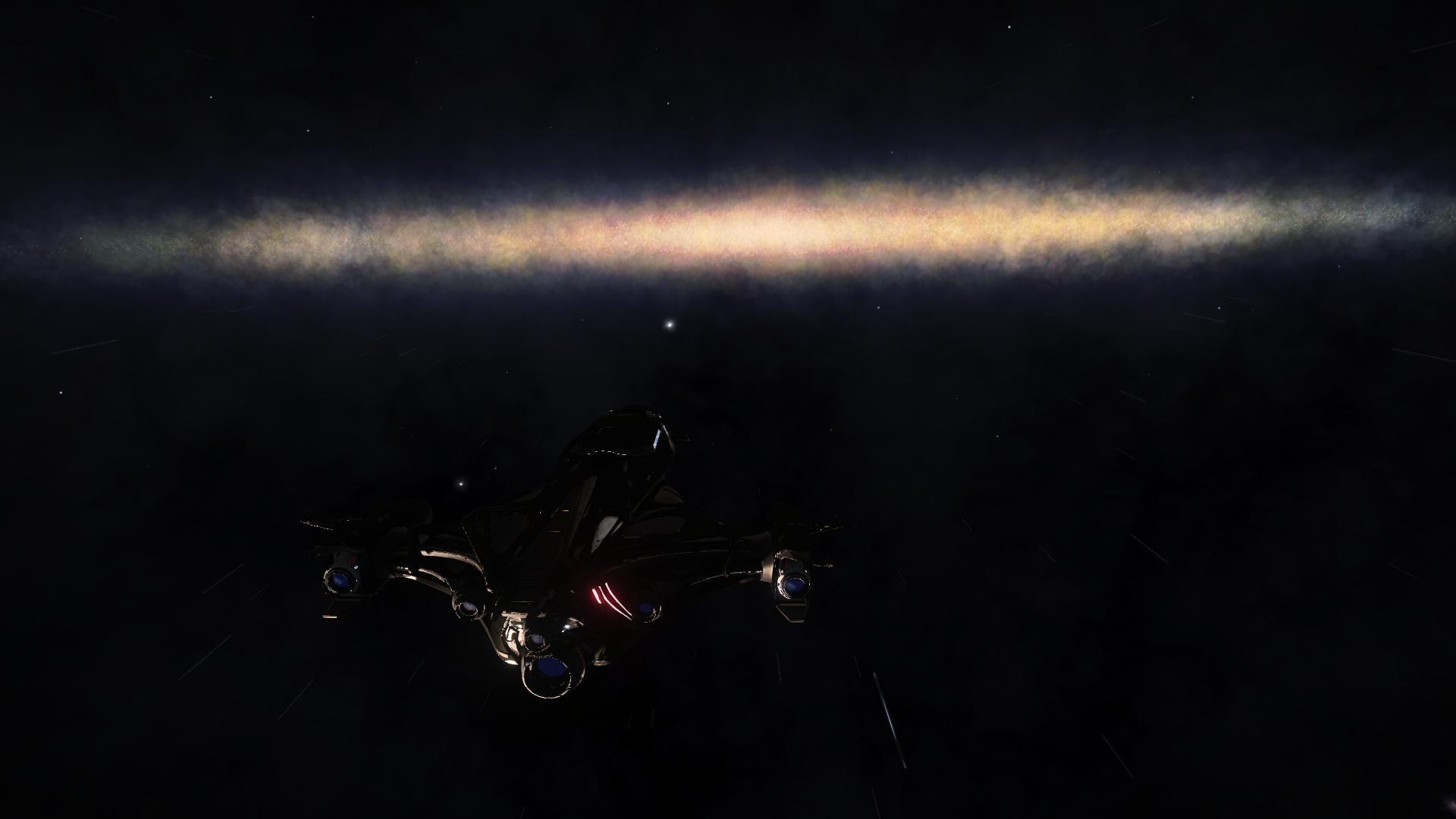 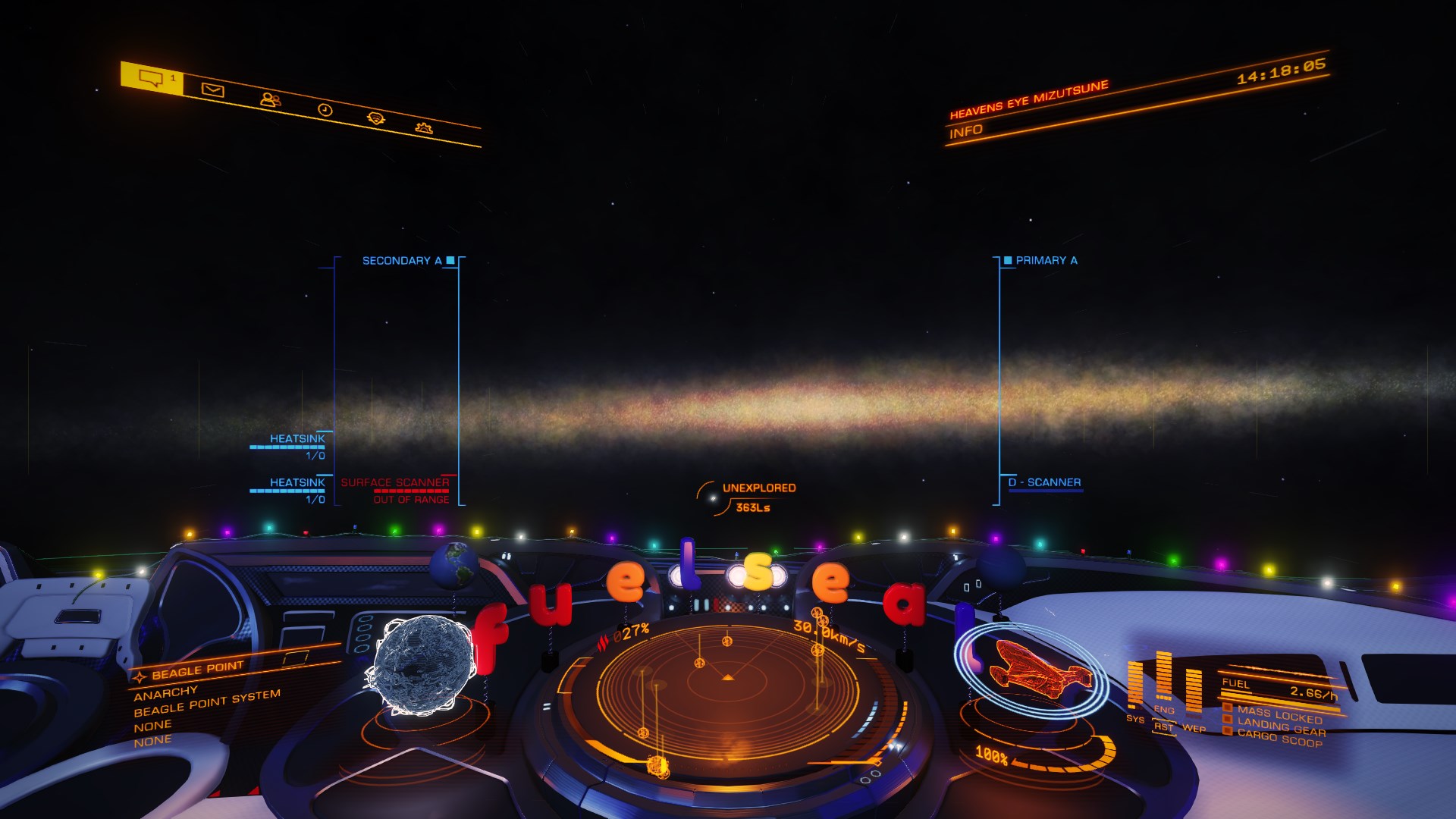 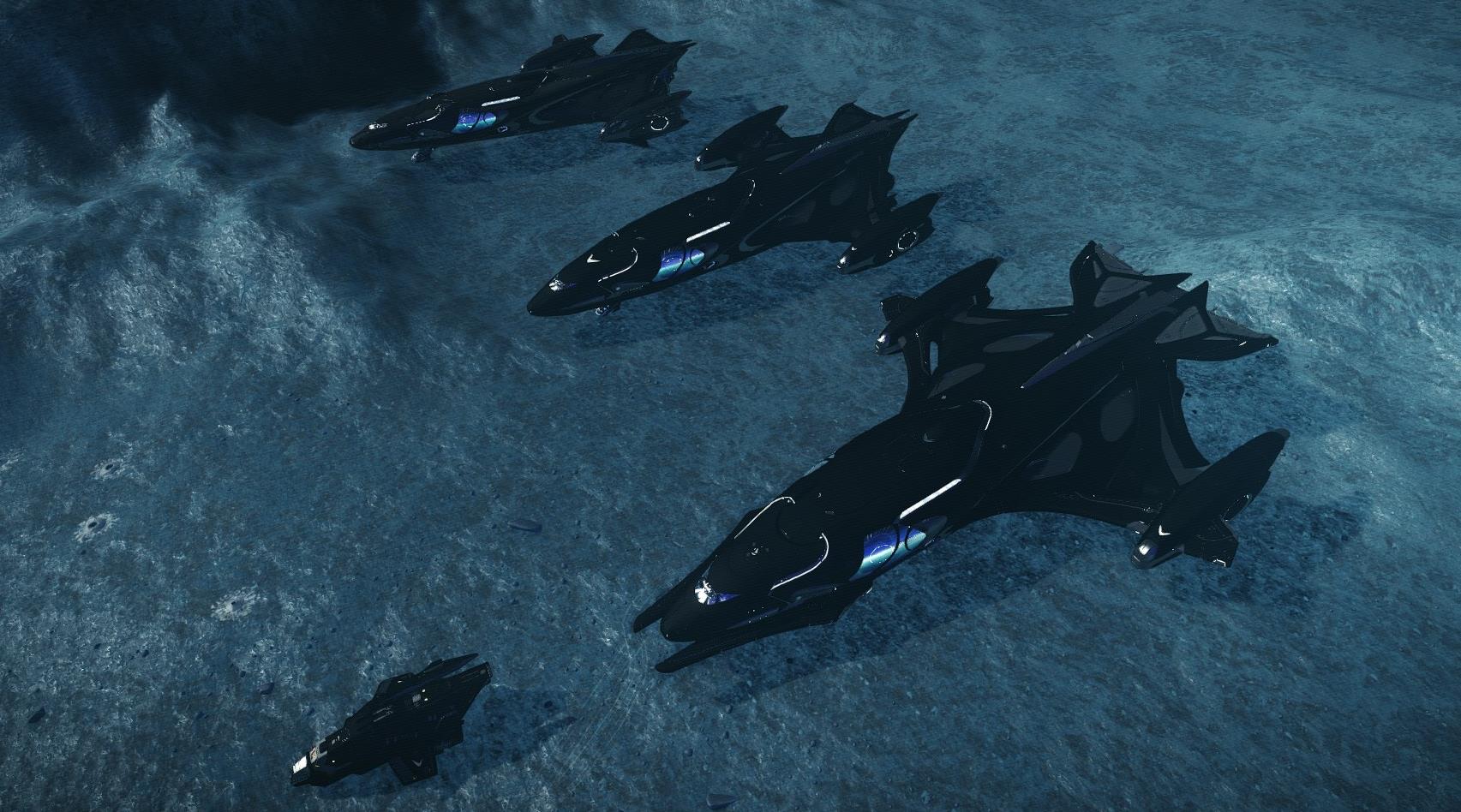 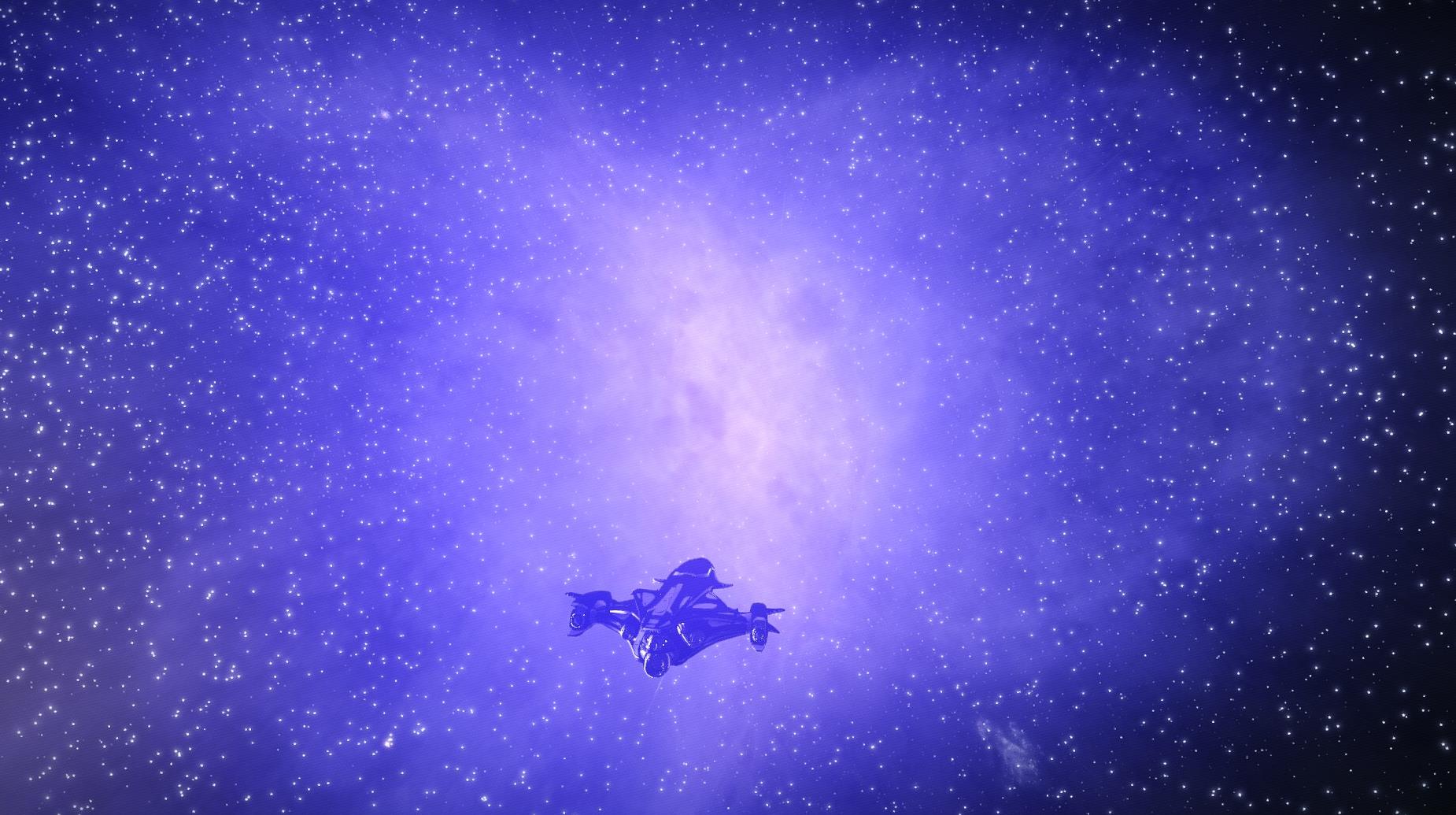 You know, arriving at Beagle was great by itself, but that's not what really got me. What really got me was when I turned around and saw the galaxy behind me. It's a feeling I won't forget.

Fast as heck said:
You know, arriving at Beagle was great by itself, but that's not what really got me. What really got me was when I turned around and saw the galaxy behind me. It's a feeling I won't forget.

Yep, there's nothing like seeing it for the first time from that far away, and its a feeling that can never be recaptured 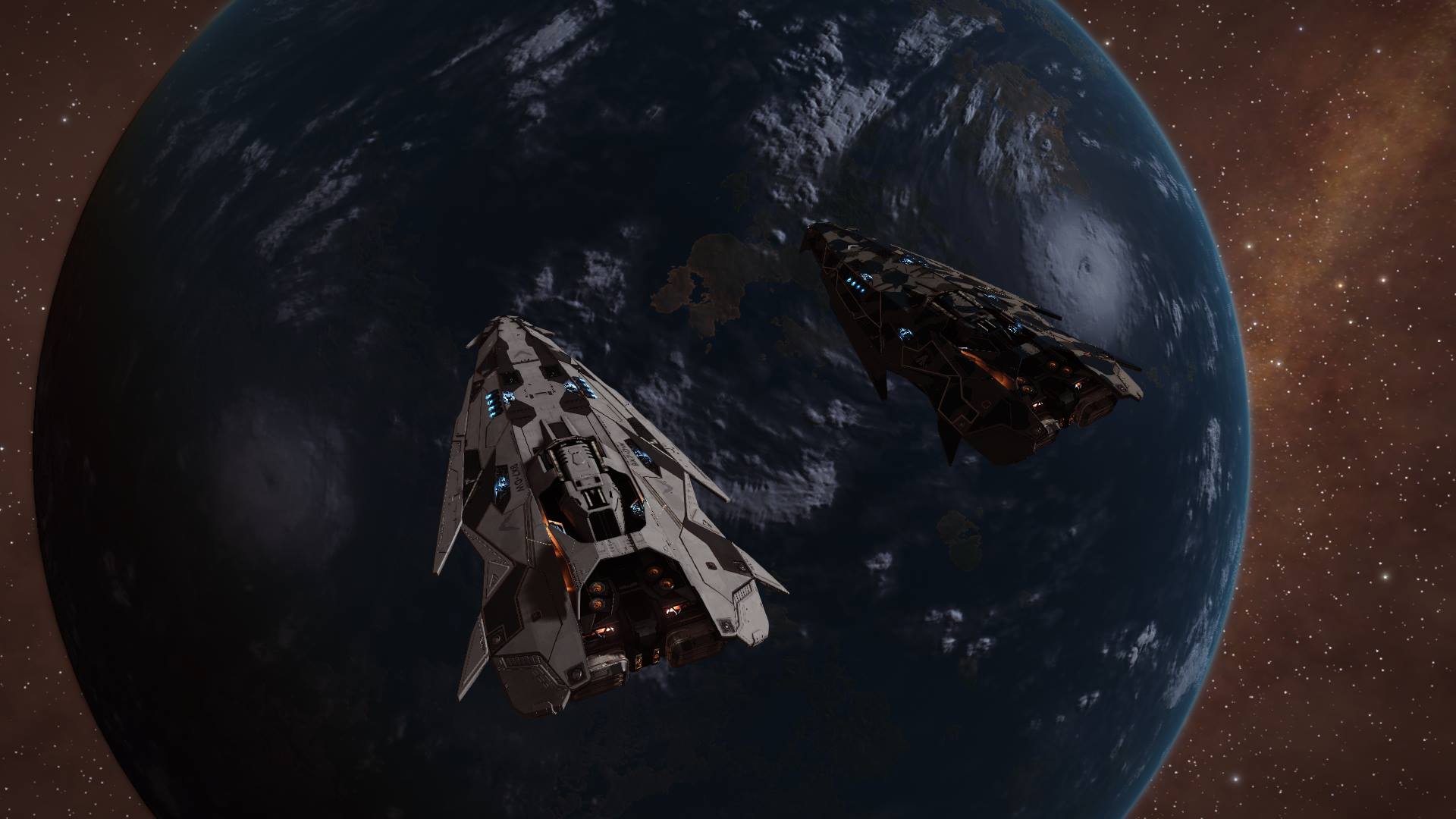 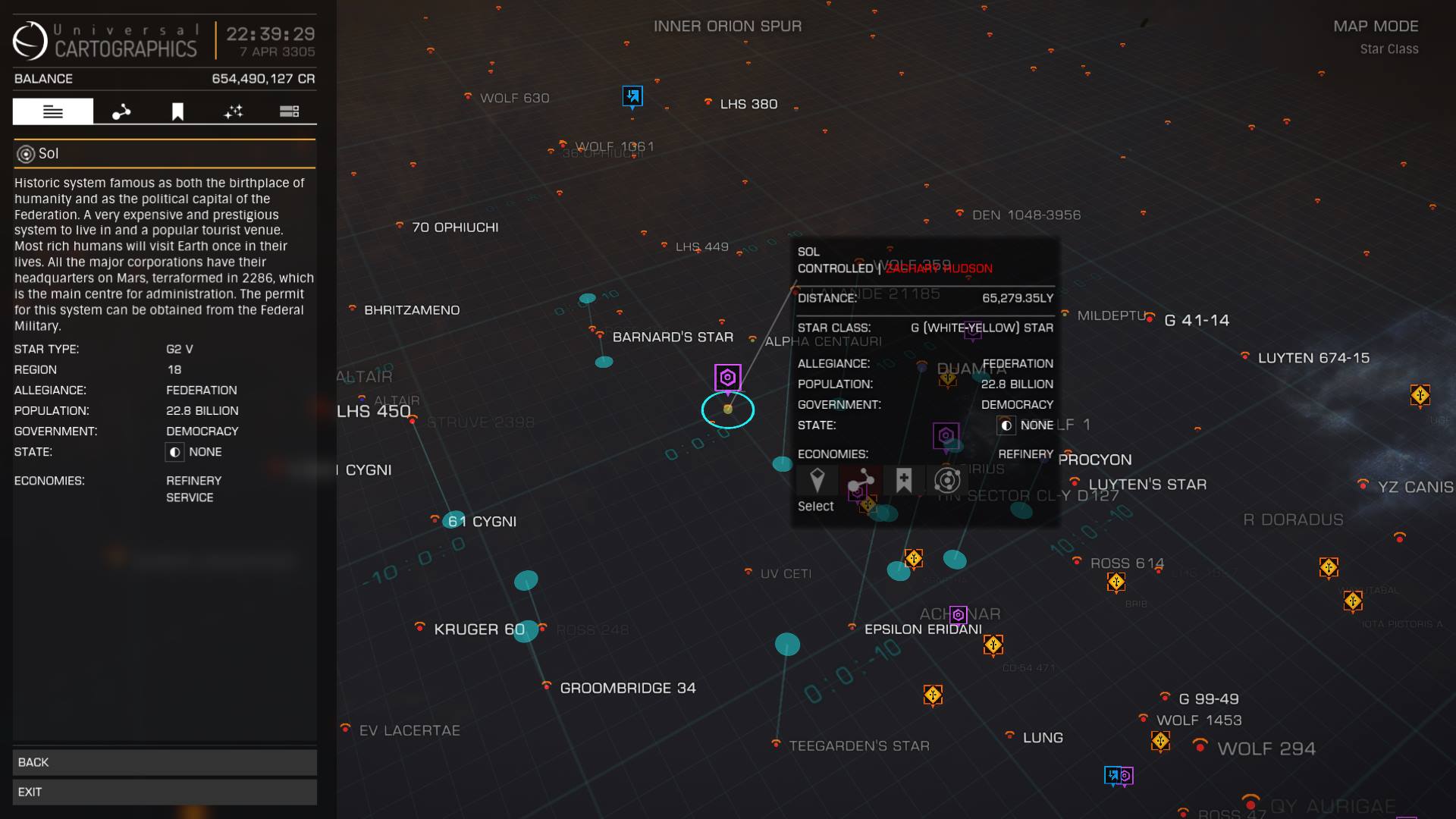 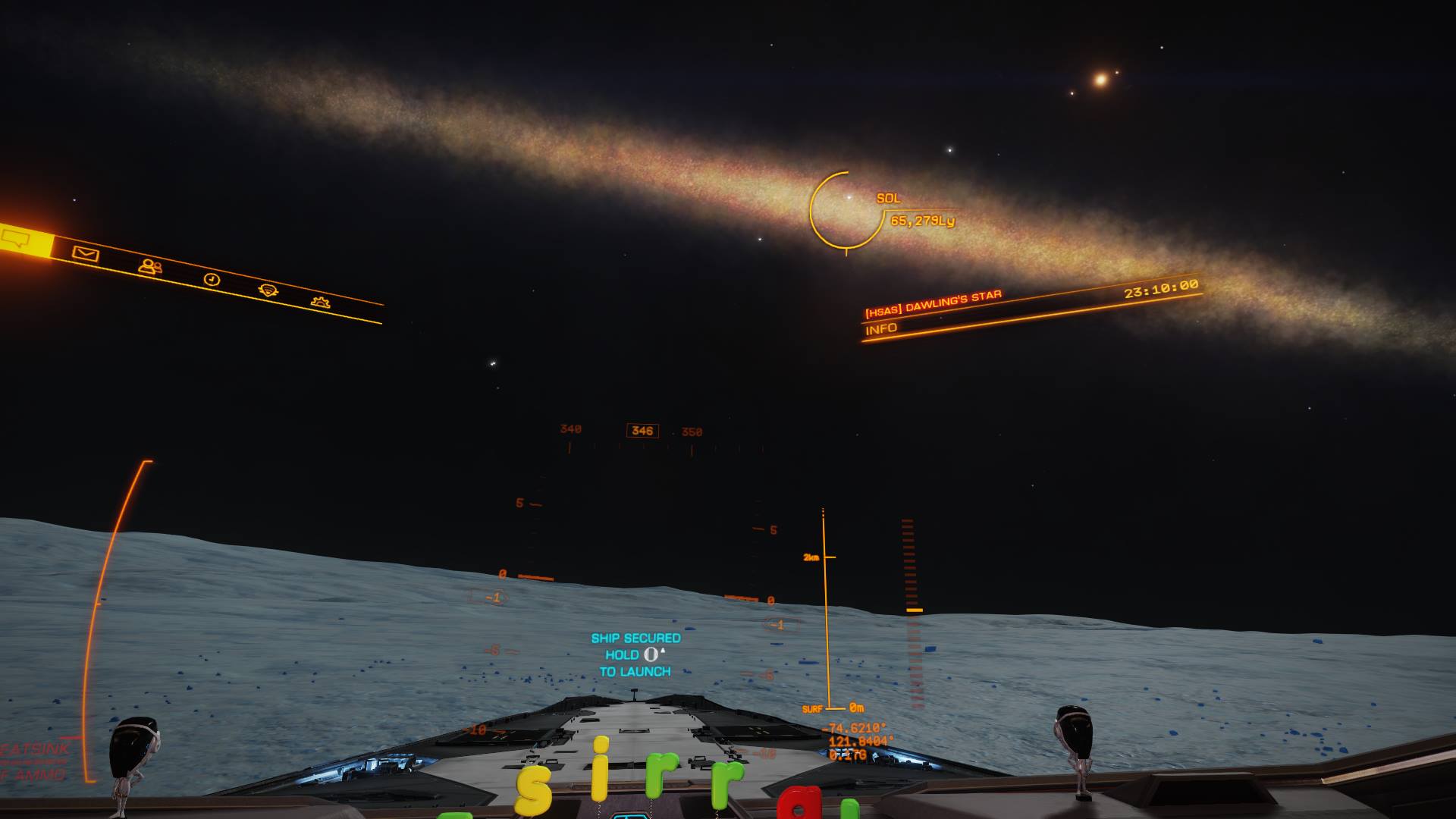 B
Thanks to the organizers and all CMDRS for a great trip. o7 to all.

S
Many thanks to the organisers for arranging a great trip.

S
CMDR Saros has arrived at Beagle Point. Many thanks to all who put this together, the routes and itineraries made for a memorable trip! 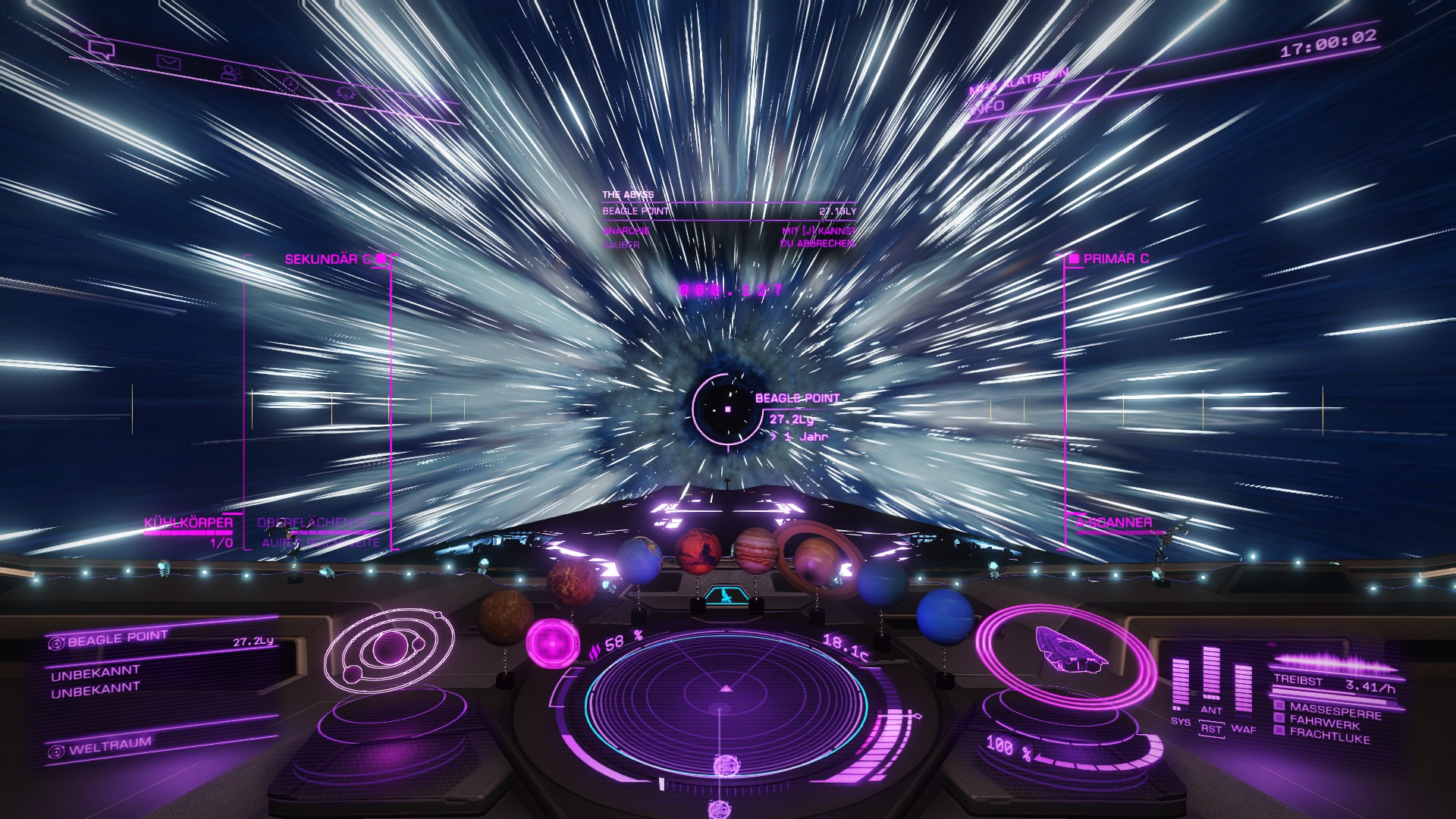 Just made it to Beagle Point today. I can’t put into words how much I enjoyed this whole event.
Thank you to all who organised this, and thanks to all the cmdrs I’ve met on the way that made this what it was.
o7 Cmdrs.

F
Made it to Beagle Point today!
I was very excited during last jump. Never thought I would ever get there and alone I would have never probably. Being out here with thousand of other CMDRs made me do it and gave me strength.
I know it's just a game and I've just sit on my couch for all these jumps, but I think it's still a proof of determination and resolution.
Besides, this game is wonderfully immersive and beautiful so it's been a fantastic trip!

Thanks to Allcrowsareblack for PS4 community and the other organizers for this great experience.
O7

A
Just arrived at Beagle Point. Which means, as far as I am concerned, that I made about half the trip since I'll have to come back somehow .

Finally made it to Beagle Point. Still deciding on where to go from here.

I hadn't really played the game much for quite a long time before DW2, this trip has rekindled some of that old magic for me. I've been sending my father screenshots along the way, as he and I used to play the original Elite together every day when I was a kid. It's been good somewhat reliving those days. Now I'm itching to see what's around that next star... getting to head out into the black on my own, though I'll miss the comraderie and knowing that every week or so there'd be a point in time where I'd see the boxes on the radar and know I'm not alone out there. Folks to share the stories with, and to jump together with, even if just once, and then scattering for a week.