Big thank you to the organizers, all CMDRs and Frontier for making ED.

Been sitting at Beagle for a couple of days contemplating the nothingness. Will stay for a while.

I did not participate as much as I would have liked. I mainly stayed in solo mode because the DBX is an eggshell and Not PVP capable. But I had fun with the events.

Big thumbs up to the organizers. This was the best community event yet.

T
Finally arrived yesterday at about 18:10 local. Launched with the fleet but lagged behind after Sag A when I nearly turned back!

Actually didn't meet many cmdrs after Sag A but did get a hull repair at one of the base camps that I was so greatful for.

I'd like to say thanks to all who made this possible. Having gone no further than 1000LY from the bubble despite playing on and off for the last 3 years I didn't think I'd ever explore this far out.

Insanely I'm looking forward to the return trip although I fear it may take me the rest of the year, maybe swing by colonia as I've never been there either.

Anyway again thanks very much and fly safe .

Finally arrived, a bit later than I would have liked but I got sidetracked from Elite for a while. I did the entire expedition in open, which actually lead to it being a bit empty after a while, but everything went fine and I didn't die.

It feels great to be back at Darwin's Legacy, at last. I ran a bit behind due to real life getting in the way, but I made it. I can't believe it, but you magnificent people have done it again. You organised the best video game experience I've ever had; even better than DW 3302, which itself was the best experience I'd had in a game up to that point. All I can say is thank you for all of your hard work, imagination, and creativity. This let us all dream of life hopping amongst the stars together! Down to business:

Rory Clague
1047
Anaconda
Maxwell's Demon (I did the first half in a mining cutter, then switched to my DW 3302 ship for the final stretch)
01N-DW 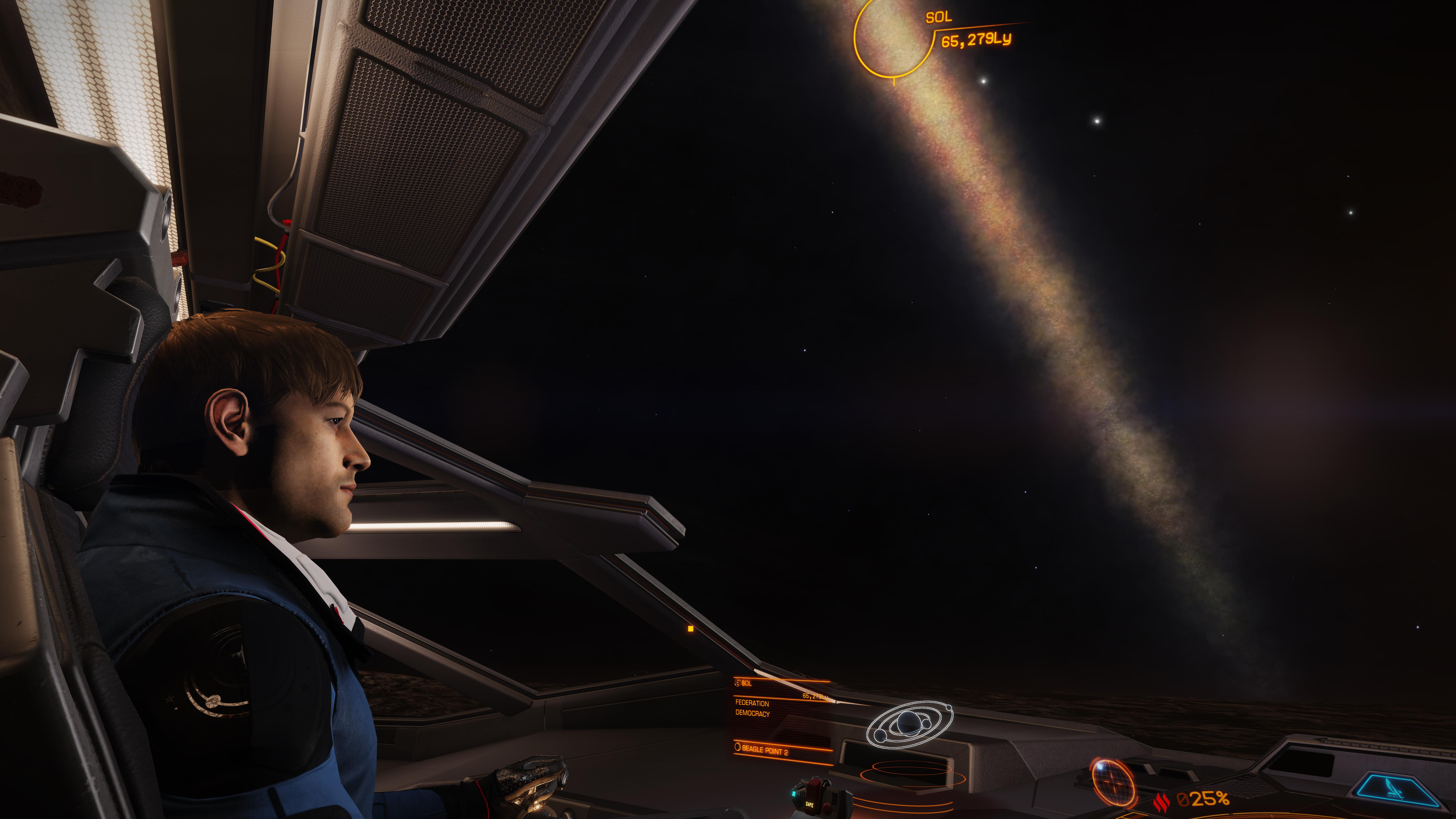 I'll see you out in the black, some day. I'll probably be on the far side of the galaxy for the forseeable future, though. I'm in no rush to return to civilisation. It's just great being out here.

Finally arrived at Beagle Point !
After having taken a vacation in the middle of the expedition, I was parked at Polo Harbour for two months and was afraid I couldn't catch up.
Fortunately, the organizers gave us enough time to complete the journey.

Thanks again for everything !

Sadly, I quickly found at the start of the expedition, that I didn't have enough play time to visit all the POIs along the way, so I pretty much straight-lined between each waypoint. However, being the completionist I am, I did make sure that I scanned every body from every system I jumped to, and mapped every body worth more than 80K Cr. Needless to say, I made Exploration Elite pretty quickly.

I might just try to push on now, and see how much further away from Sol I can get before I turn around and head home at a much slower pace. Hopefully I'll be back in the Bubble by Christmas.

I guess there's only one thing left to say... "So long, and thanks for all the fish"! 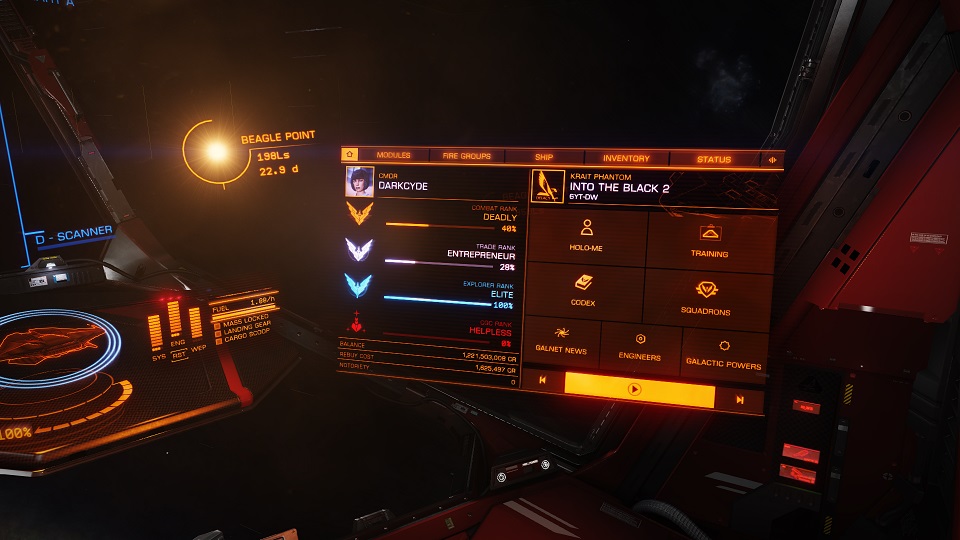 Just arrived at Beagle Point and left it nearly immediatly for a Seal intervention !
I'll just have to get back and finally land on the last Wp. Thanks to all of you, cmdrs and especially admins, for such a fantastic experience !

O
Great journey! Dumb question... Where is the closest port to sell stuff from Beagle Point?

Taxi!!! - Sorry was not so closely involved but made it all the same! Thank you to Erimus Kamzel & Dr Kaii - Respect!

Now where is this ferry? 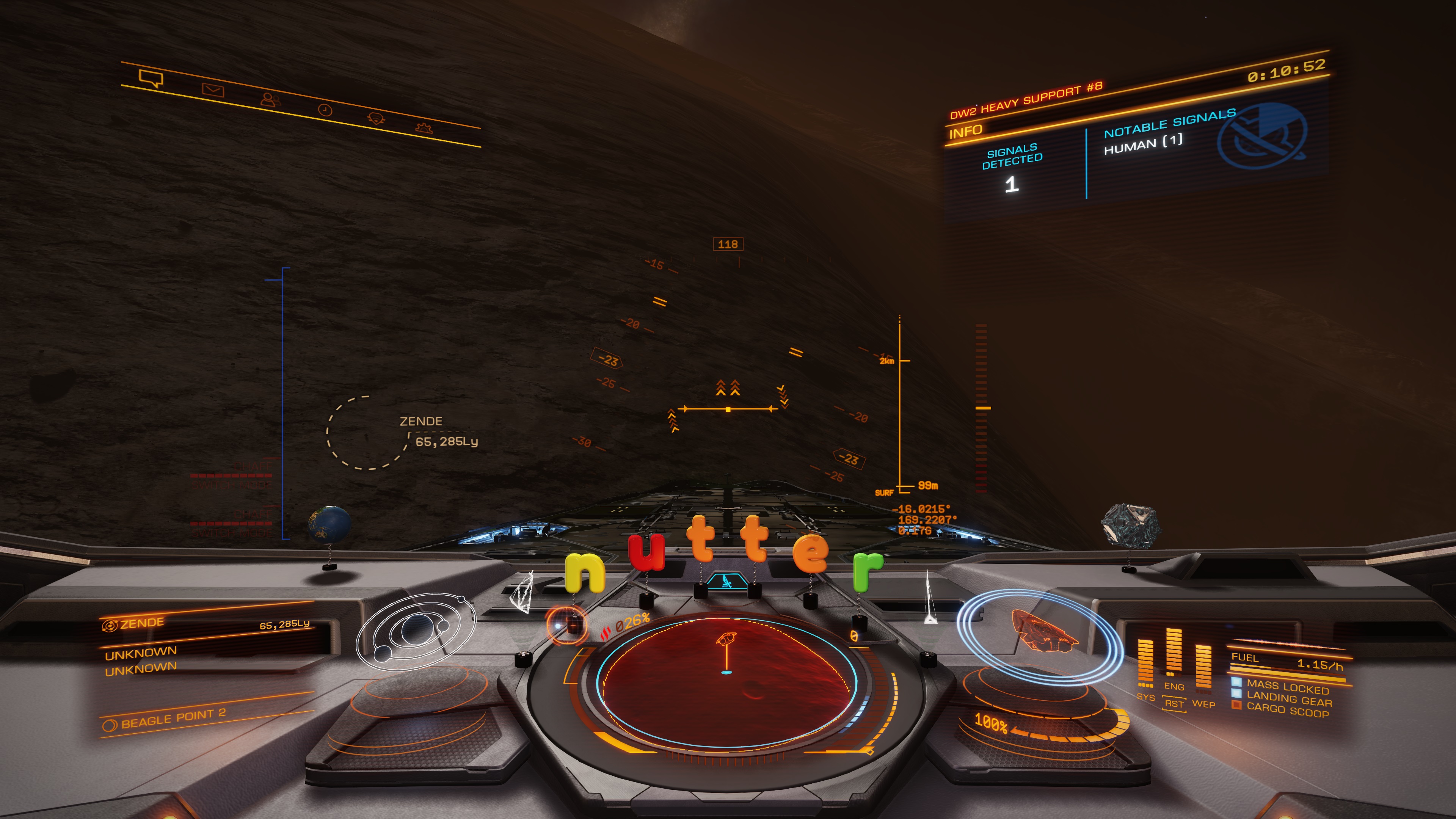 ding ding ding ding
Above and Beyond, (4AV-DW), arriving.
CDR Nuke Dukem on deck, in the wee hours of the morning of 18 May, 2019. I know I was only slightly fashionably late, but life finds a way. Now to spend a few days (or weeks) poking around the area, before starting the long trip home on the Voyager trail route. This was a lot of fun, and a big shout-out to the community! Looking forward to the next big event! 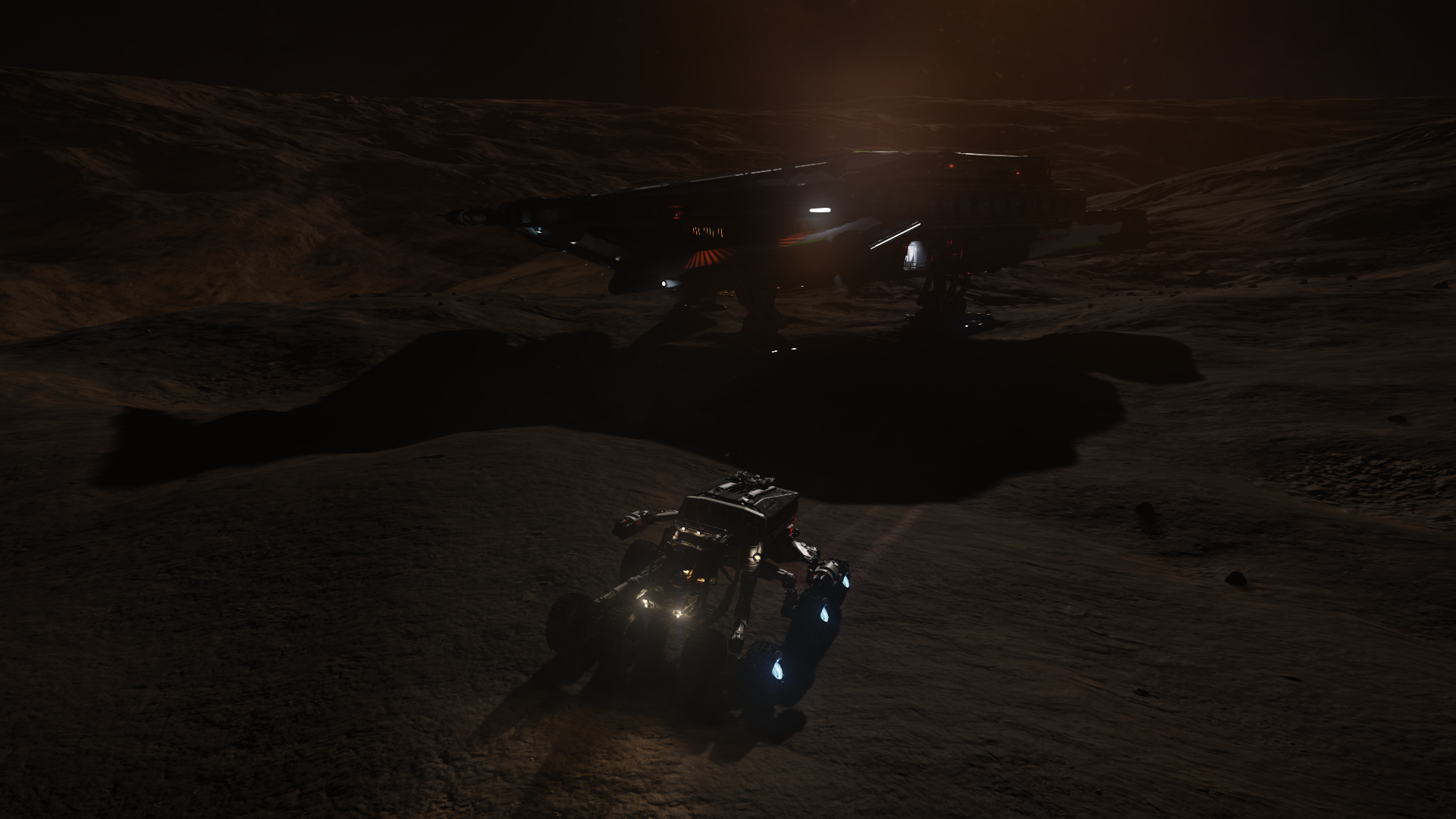 M
In late December of 2017, while looking for something to do while sitting at work bored because of the holidays, I happened upon a post. This post detailed the great lengths a couple of fuel rats had gone to in order to save a commander who had gone just a little too far out from Semotus Beacon and couldn't make it back due to lack of fuel. The idea fascinated me... I mean, I had looked for a spaceflight game for forever. I started way back in the day with Earth & Beyond, and then tried Eve Online when E&B died. I "knew" that there were no other currently-available games out there that featured spaceflight that I could play and play with other people. Oh, sure, there's that game that has been in Alpha for the last five years, but that wasn't ready for prime time. But there weren't any others... So imagine my surprise when I found that, not only was there a game which featured spaceflight, but there was one where the players actually actively HELPED each-other! A game where a player would, for nothing more than a "thanks", drop whatever they were doing and travel multiple hundreds (or more) of jumps just to be able to help someone they, frankly, didn't know from anyone. This idea fascinated me, so I had to look into it. In early January, 2018, I bought the game via the annual new-years sale. Not having tried it before, I (stupidly) decided to just get the base game, not the Horizons addon. That got rectified before the month was out, but not until after the sale was over. D'oh!

After spending a little time getting used to the game, I learned about some discord channels and some of the various tools. One day, while I was poking around on EDSM, I found expeditions... I wondered what these were and if I could get in on any of them. And then the announcement of DW2 showed up. I think I found it in the forums first, but I saw it and instantly decided that I, a month-old player of the game, was GOING on this trip. I decided that it was impossible for me to make it all the way to an Anaconda for the trip, but I could darn sure make it into an AspX. And so, by March 1, I had gotten myself into my AspX. I then logged out for bed that night. I didn't log back in until early October.

I don't honestly recall what prompted me to log back in. I had been following the DW2 planning in a kinda offhand way, but hadn't really actively been tracking it, other than by what people were saying in the Galactic Academy Discord group. So I finally logged back in and realized that I hadn't gotten my ship ready and the fleet was going to leave any day now! Of course, it wasn't, but I didn't realize that. So I spent the next three months (basically) scrambling to figure out what I needed for a ship and to get the engineering done to go. At some point, I realized that it really WAS possible to get enough cash for an Anaconda, so I went for it. I spent the last two or so weeks bouncing from ship to ship trying to decide which one to take. However, since I wanted to be a big part of the mining CGs, I decided that the only way I could get everything in that I needed was to take the Conda. Just before we started this run, I decided to make a test flight to get the 5K Ly I needed to unlock one of the engineers, and took my outfitted Conda to the Crab pulsar. That was an amazing experience in and of itself.

Now, I should note that, following some RL pressure, I ended up deciding to start school for my master's degree in January as well. That also got factored in, because I knew I was going to have a limited amount of time to play. If I had known how limited, I might not have actually come, but it wasn't until we got to Explorer's Anchorage just off of Sag A* that I learned how limited it would become. I got there and ran straight out of time for game. Two months later, almost to the day, I logged back in with everyone pretty much already arriving at Beagle. I was concerned that I wasn't going to be able to do it. That said, I had started this trip, I was darn well going to finish it. As a result of the impending deadline, in ten game days (21 RL days), I have travelled from Sag A* to my destination... Beagle Point.

I really want to thank Qohen Leth, Dr. Kaii, Synaptik11, and everyone in the Galactic Academy and Fleetcomm Discord servers who, at one point or another, has helped me get ready and then get here. Thank you to all the planners who put in so much time preparing the route and the POIs (about half of which, I'm sorry to say, I didn't get to see). And thank you to the devs, without whom I wouldn't have the opportunity to do this.

As I sit here at Beagle Point, looking back towards the cradle of humanity... The only thing I can say is "Wow"...

B
Finally made it tonight, with a marathon of the last 14k ly or so.

7 jumps out, that trinary system at ceeckia ze-h c13-0 scared me half to death-- as soon as I popped in, I was all heat critical, and had to fire off my first heat sink of the expedition.

But it was a great ride, thanks to the organizers for putting it on. I know it was a massive effort, and I appreciate your hard work herding us cats across the galaxy.

I'm logged out in BP now, and I'll probably take a little break for a few days, I think.

o7 to the organizers, and o7 to the CMDRs who participated, whether you made it to BP or not.

Due to obscure formula subtleties, 80 arrival entries were filtered out of the redeem code mailing list, and thus the following Cmdrs did not receive the expected email. (For those who are curious, it seems that MATCH() has trouble with ranges that are themselves an IMPORTRANGE(); you learn something new everyday...) We will send the code email in a couple days tops. Sorry for the inconvenience, totally my fault!

Finally arrived at Beagle Point on Friday 17 May - been quite a trip! Thanks to everyone involved in the organisation of DW2 for making this possible. Now I just have to work out how to get back and hand in all the data I've collected along the way! Looking forward to receiving my decal and certificate! 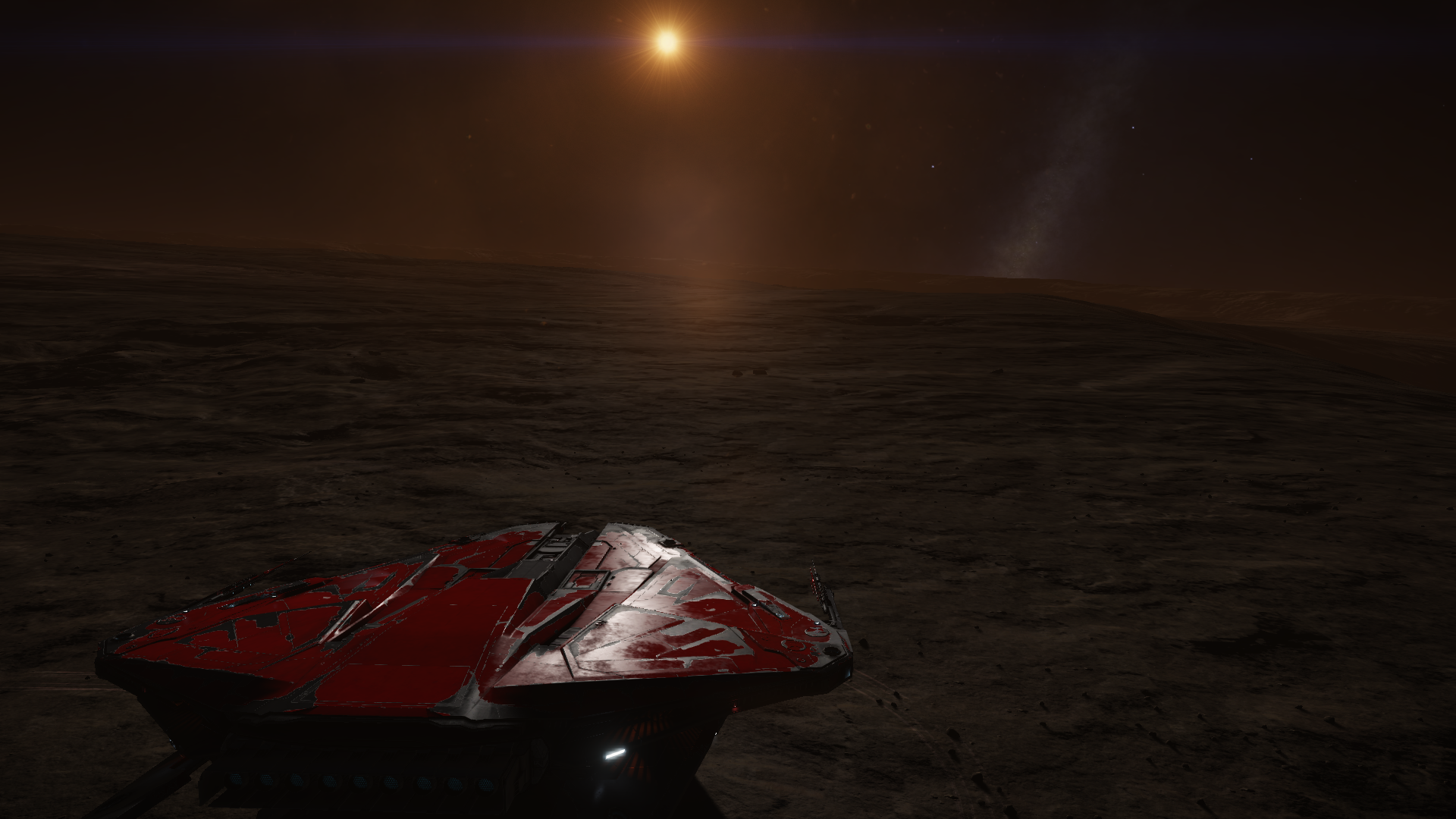 C
Arrived at Beagle on May 6th, woot-woot!! Heading back to Sag A* to claim my discoveries! o7 all, see you all in the black...

Well, the Eschatological Bridge finally arrived. Going to get a decent night's sleep before on to Ishum's Reach. 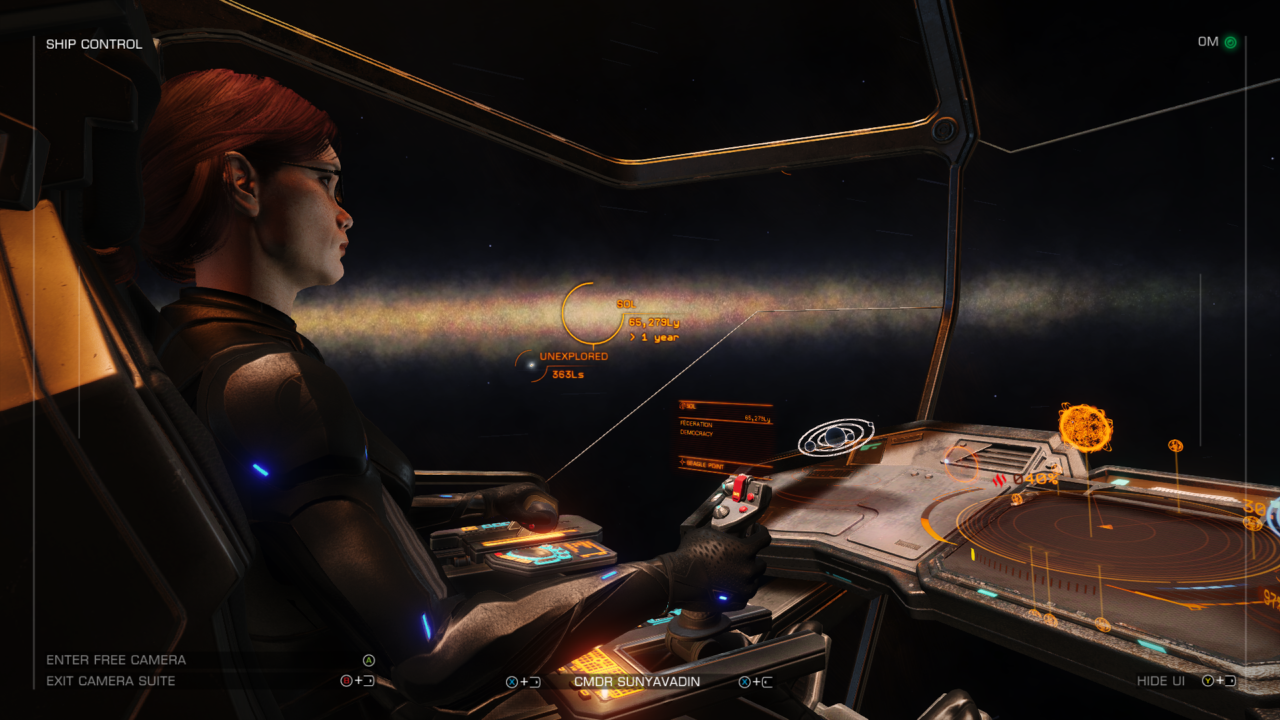 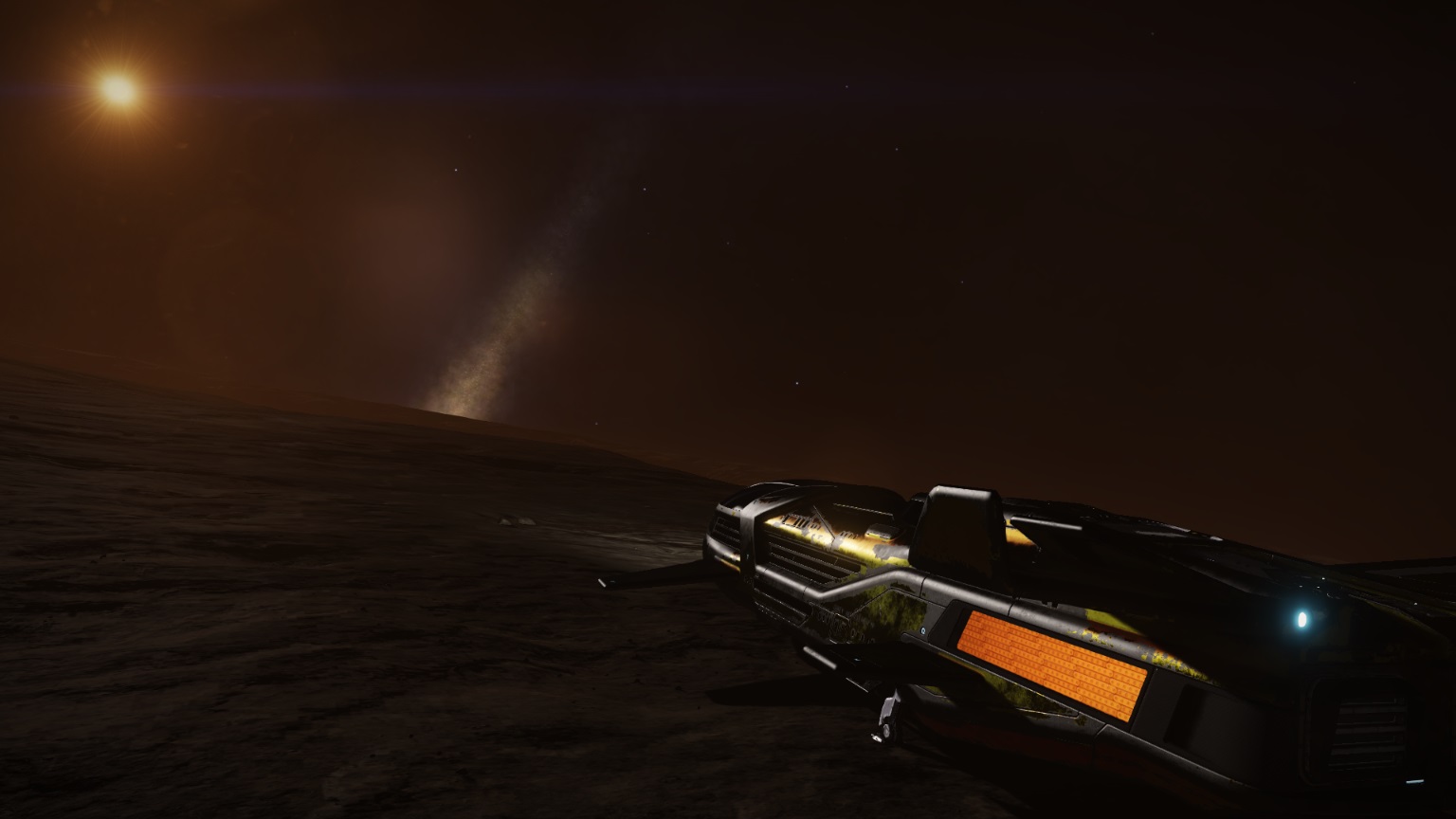 Made it! Funny how life tries to get in the way of a 4 month journey. Welp...now that I have literally taken a selfie and basked in the glow of the galaxy on the "Furthest Rock From the Sun", it's time to turn around and start down "The Long Road Home." 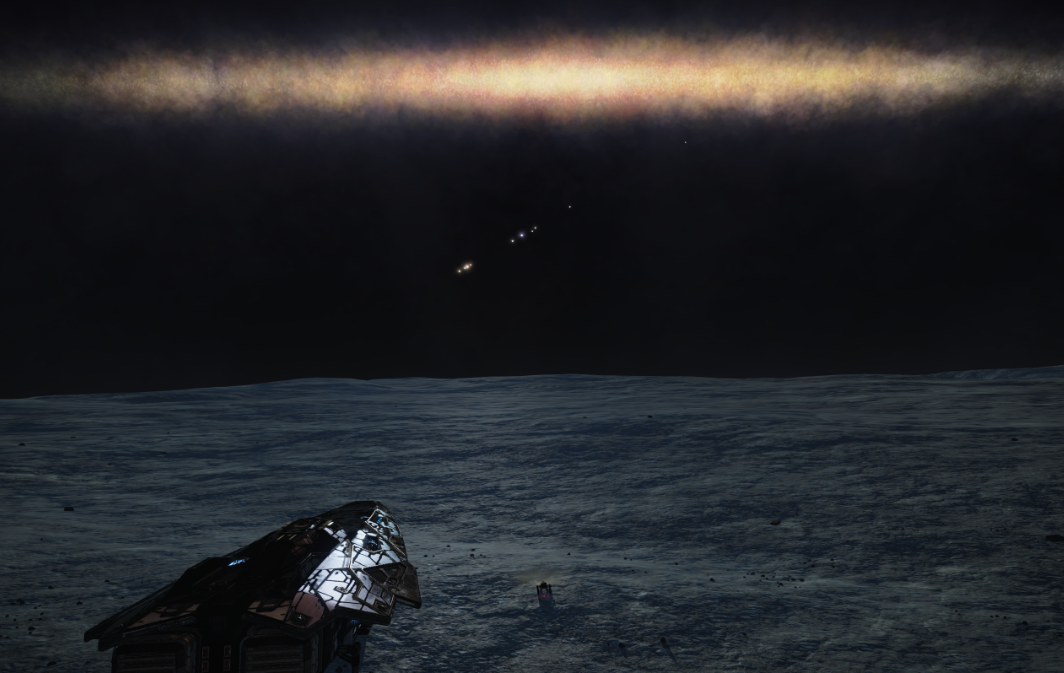 "Furthest Rock From the Sun" 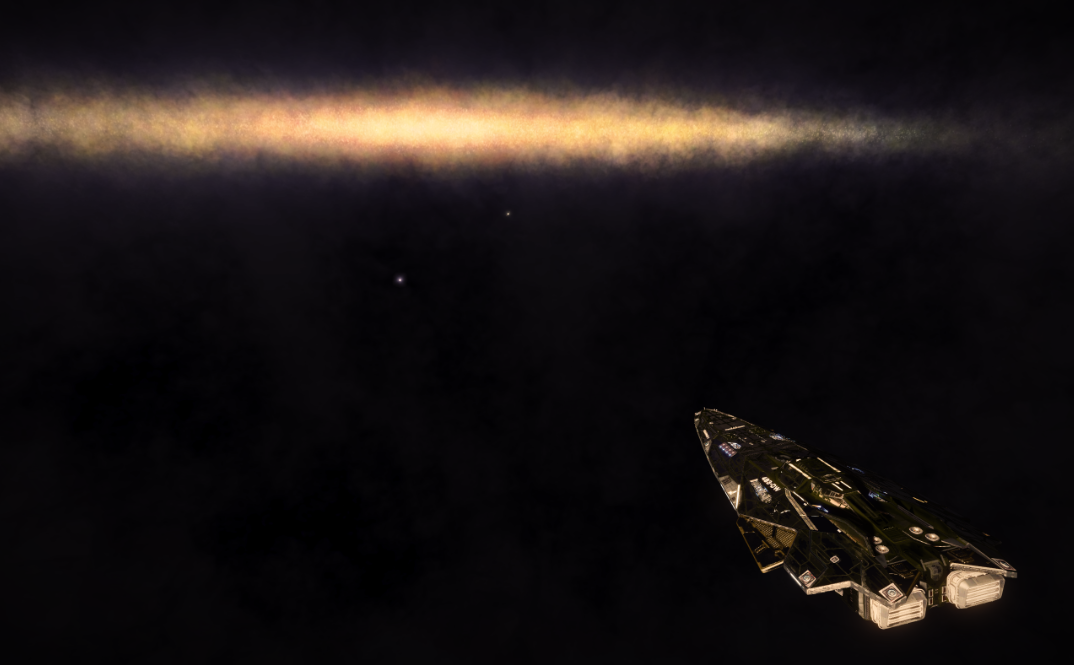