As part of the acknowledgement of what the Distant Worlds 3305 starfleet achieved during its journey to Beagle Point, Frontier Developments have given us the opportunity to nominate several of our favourite locations along the route to become hosts to a tourist beacon each.

There were literally hundreds of interesting locations visited and discovered during the expedition, far too many to submit, so I've asked the DW2 team to whittle it down to 18 candidate entries based off the photo competition winners, interesting locations discovered during the journey, locations where some significant events or projects were undertaken, and some taken from the favourite WP feedback poll (from the arrivals form stats).

What we need now is for people to vote for their favourite candidates from the list below - select the ones where you would like to see a tourist beacon placed.

You have a maximum of 8 votes each.

The poll will close 7 days from this posting, after which the results will be sent to Frontier to decide which ones, and how many, of these locations will receive tourist beacons.
The final decisions on which locations are chosen will be made purely at the discretion of Frontier Developments.

The candidate locations are: 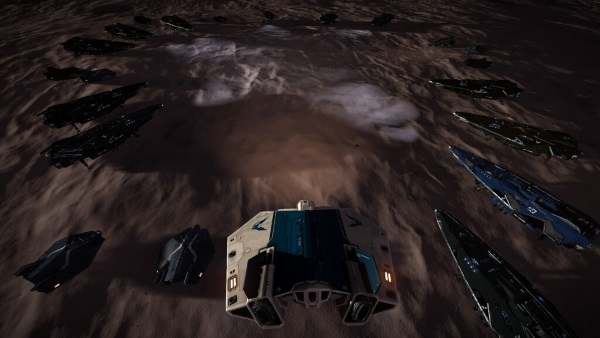 Note that Beagle Point already has a tourist beacon, however that one does not relate to Distant Worlds. A vote for this location would be to ask Frontier to place a DW beacon on the surface of Planet 2, at the Legacy Crater basecamp coordinates.
Basecamp: “Legacy Crater”
Planet/Moon : 2
Basecamp Surface Coordinates : -16.001 / 169.212
Waypoint 12 of the Distant Worlds 2 Expedition, and voted as one of its most popular basecamps. 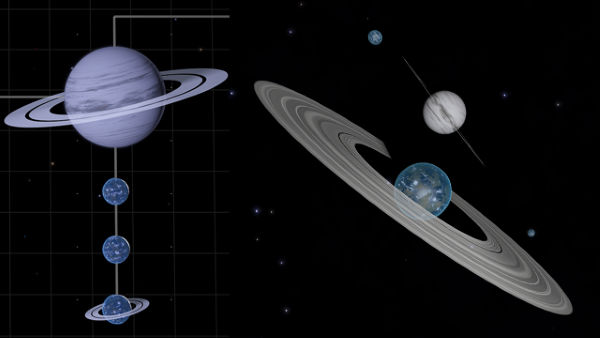 GalMap Ref: Rhuedgie KN-T e3-721
Discovered during the Perseus Survey, but also visited as a route POI on DW2, this rare system contains a gas giant orbited by three Earth-Like Worlds, one of which is ringed. 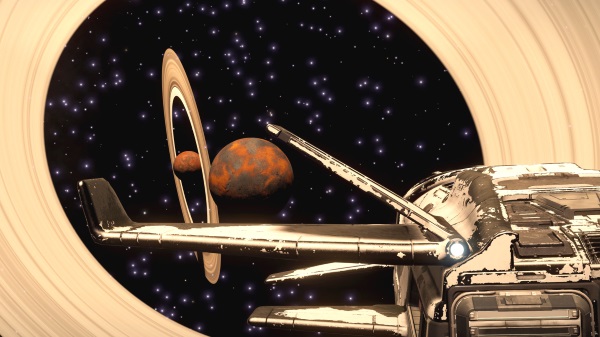 GalMap Ref: Byaa Ain QA-J c11-144
One of the intermediate POIs that the DW2 fleet passed through en-route to Waypoint 5 (Polo Harbour). The system contains twin ringed planets that orbit each other less than 1 lightsecond apart. Each planets rings are perpendicular to that of its neighbours, allowing for fascinating views. 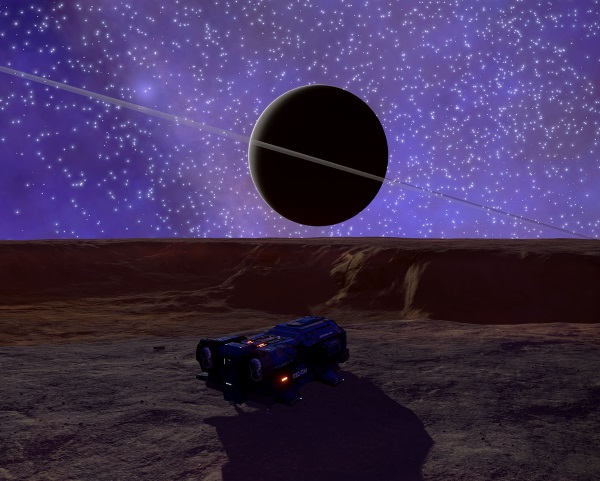 GalMap Ref: Phroi Bluae QI-T e3-3454
Planet/Moon : 3 A
Waypoint 9 of the Distant Worlds 2 Expedition, and voted as one of its most popular basecamps. Light blue skies surrounding a neutron star system make for some spectacular environmental views. 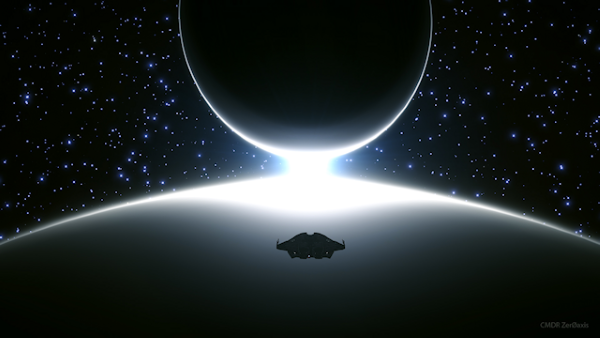 GalMap Ref: Hypoe Bluae VP-O e6-8688
Planet/Moon : Planets A1 and A2
One of the intermediate POIs that the DW2 fleet passed through en-route to Waypoint 9. Planets A 1 and A 2 of this star system are twin gas giants in a binary orbit with an orbital period of just 0.5D. They orbit one another so closely, that CMDR's who visit them will be treated to an amazing view of them both. 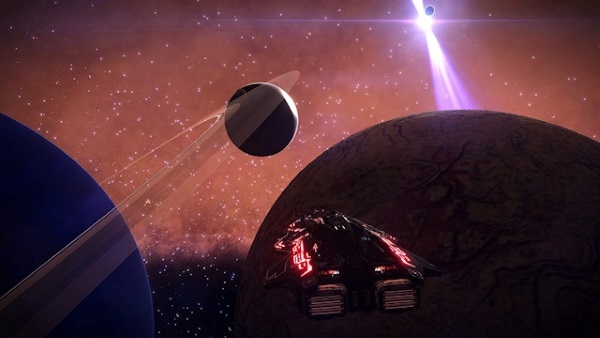 GalMap Ref: Dryau Ausms KG-Y e3390
Planet/Moon : AB 2
Waypoint 6 of the Distant Worlds 2 Expedition, and voted as one of its most popular basecamps. Extremely interesting system from a topology standpoint. The black hole drop star is in a tight binary with a white dwarf, which itself has a gas giant orbiting fully inside it's exclusion zone and passing through the cones with a period of 14 minutes. Less than 20ls away lies a binary of a huge waterworld and a ringed gas giant, the latter of which has 2 volcanic moons skimming the very edge of the rings on slightly inclined orbits. 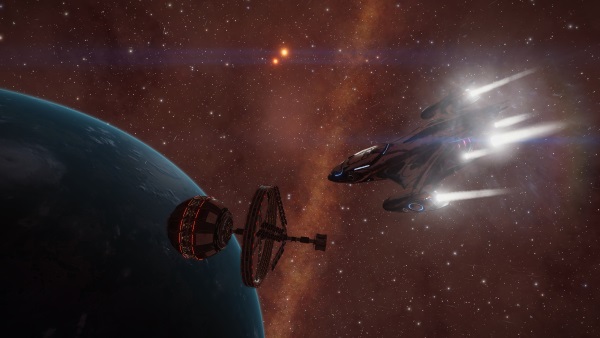 GalMap Ref: Stuemeae FG-Y d7561
Planet/Moon : CD 4
Location at which the Distant Worlds 3305 starfleet constructed an Ocellus-class starport during their journey across the galaxy, and set to be the location of a (yet to be added) Science Relay and the home base of the Deep Space Science Vessel 'Distant Worlds' - a megaship that we're told will travel to locations of scientific interest neighbouring Sagittarius A*. 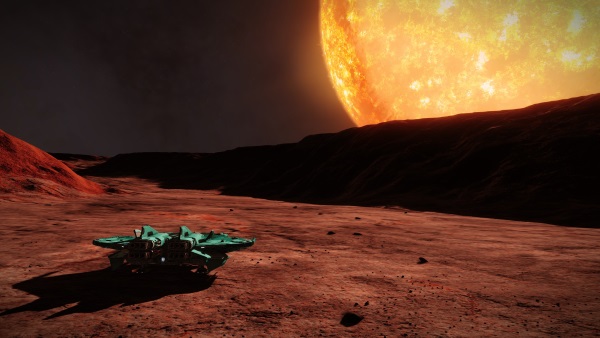 GalMap Ref: Swoals IL-Y e0
Basecamp: “Hades Edge”
Planet/Moon : B 1
Basecamp Surface Coordinates : 59.5882 / -55.9190
Waypoint 8 of the Distant Worlds 2 Expedition, and voted as one of its most popular basecamps. A neutron jump from its neighbouring system, or a 82 LY synthesis jump, is required to reach Goliath's Rest. Reaching this system offers a challenge, but the view of the galactic core below you makes it worth the effort. The basecamp world orbits its giant star in close proximity, which also adds to the uniqueness of this POI. 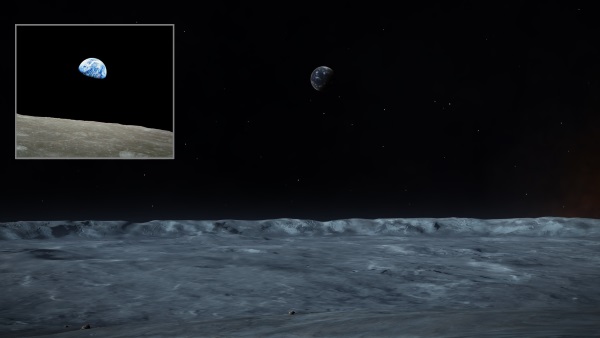 GalMap Ref: Smootoae QY-S d3-202
Basecamp: “Magnificent Desolation”
Planet/Moon : 3 A
Basecamp Surface Coordinates : -68.4811 / 64.2183
Waypoint 11 of the Distant Worlds 2 Expedition, and voted as one of its most popular basecamps. Situated on the galactic prime meridian, and 1 LY above the galactic plane z-line, some 25,898 LYs from Sagittarius A* on the far side of the galaxy, this system is the physically located antithesis of Sol. Remarkably the star system also has 8 major planets, the third one being a Water World orbited by a moon that is strikingly similar in both appearance, size, and composition to that of the Earth's moon, Luna, on the opposite side of the galaxy from this location. 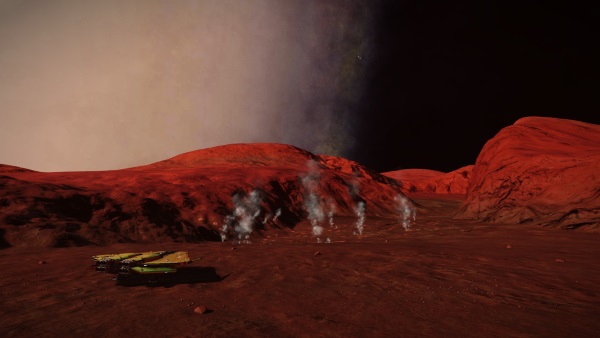 GalMap Ref: Quemeou HW-W d1-11
Planet/Moon : A 3
Location discovered during DW2's 'Break the Sky' event. Quemeou HW-W d1-11 was the system that was selected as a gathering point prior to the climb to the galactic ceiling. It contains all materials for FSD boosting and is en-route to Quemeou AA-A g1 - the system that is 2,856 LYs above the core, and reachable with a 32 LY ship. 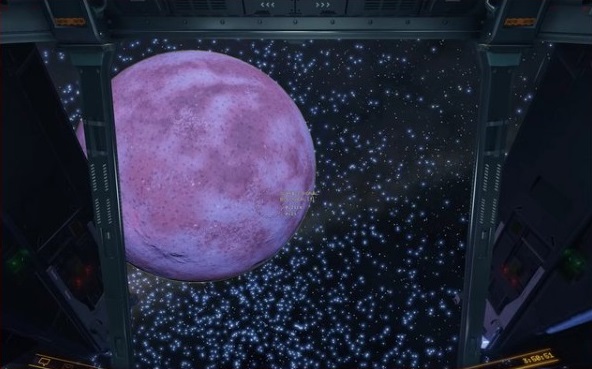 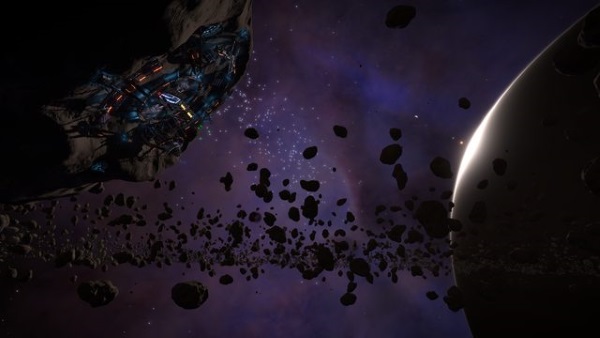 GalMap Ref: Omega Sector VE-Q b5-15
Location of the 1st Distant Worlds Community Goal where the bulk of the minerals required for the Explorer's Anchorage superstructure were mined. 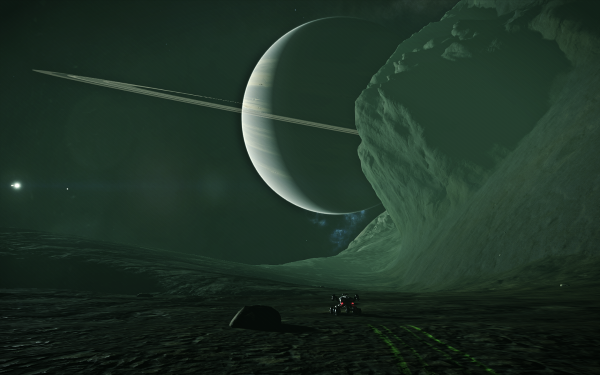 14. 'Choose Your Own Adventure' 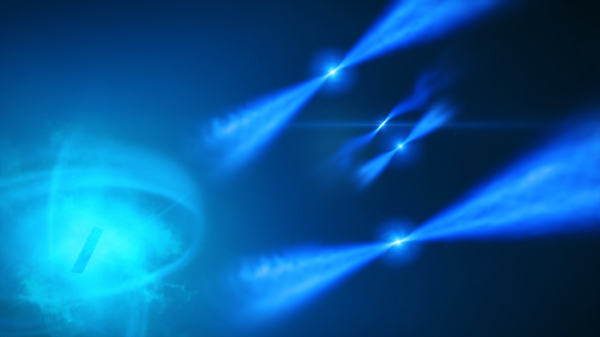 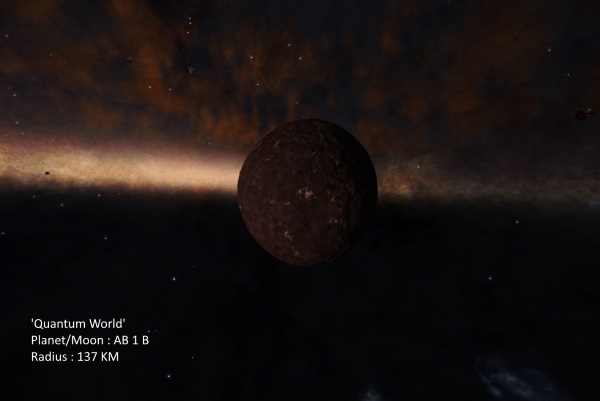 GalMap Ref: Flyiedgiae QN-T d3-17
Planet/Moon : AB 1 B
The smallest known world in the galaxy at 137 km radius. It was a last minute addition to the route, and proved to be a lot of fun for those that visited it and attempted to circumnavigate it in SRVs. 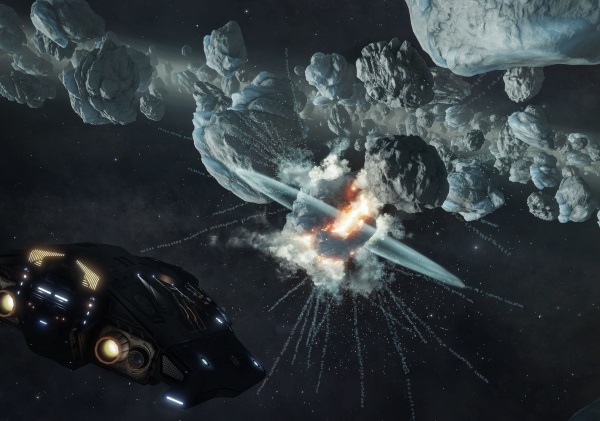 GalMap Ref: Juenae AJ-C C2-1813
Planet/Moon : A 2
Extreme rare Bauxite hotspot that was scouted out by the DW2 fleet prospecting team prior to the galactic core CG. Subsequently this location saw large scale mining and logistical operations during the CG to build the Science Relay* and DSSV Distant Worlds megaship* (*note, these are still to be added to the game). 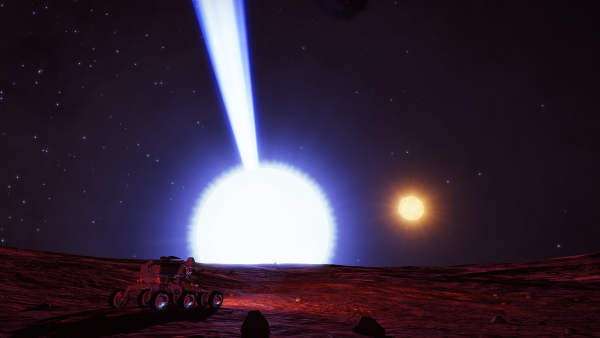 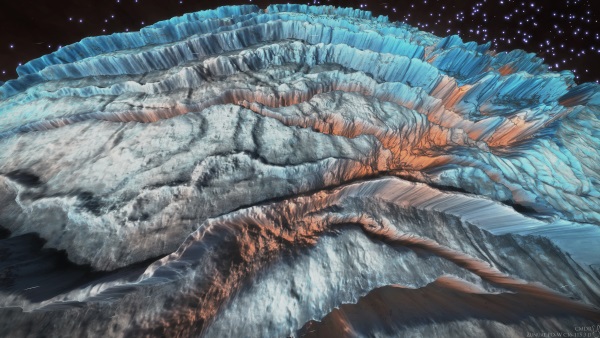 Reserved POI that will be submitted regardless of the vote:
HR 5413 - system where, on January 14th 3305, thousands of starships made their first jump to after departing Pallaeni and beginning their journey across the galaxy. So many ships mass jumped from the departure point and arrived simultaneously at HR 5413, that it is rumoured, the gravitational waves emitted from them could be detectable across the galaxy for eons to come..

J
It was rumored that gravitational waves were emitted that will be detectable?! Doesn’t sound like rumor if it can be verified.

N
I really like Newton’s Necropolis as the beacon site cuz it being the highest G landable planet at 10.66G, and that is was discovered on DW2 means it should have a larger recognition for being a part of DW2.

It would be criminal not to have some nod to DW2 at Explorers Anchorage.

My vote is cast, Explorer's Anchorage definitely on the list.....

Spidaman1991 said:
I am suprised the view isnt on here appreciate being given a voting opportunity though
Click to expand...

The View already has a tourist beacon

Luna's Shadow because... well should be obvious really xD

D
Sad that Rings of Juenae isn't gaining traction. I found the Bauxite hotspot and spent a LOT of time in it, made a lot of friends and was rarely there alone.
The hotspot isn't in an icy ring btw, but hey, it's a cool shot so keep it.

Who even voted for "Quantum World? 36 of you?

I know. I went there.

It did NOT live up to the hype.

Erimus Kamzel said:
The View already has a tourist beacon
Click to expand...

PaleGringo said:
Who even voted for "Quantum World? 36 of you?

I know. I went there.

It did NOT live up to the hype.
Click to expand...

No Cartoon Characters at all! No concession stands either! The best ride was your own SRV! Boringgggggggggggggggg!

I can't believe that the Fireflies isn't getting more lurve ...

Para Handy said:
I can't believe that the Fireflies isn't getting more lurve ...
Click to expand...

I like that one too . Btw Fireflies was a placeholder name, the discoverer has just contacted me with the name he gave it. Poll and thread updated!

Erimus Kamzel said:
I like that one too . Btw Fireflies was a placeholder name, the discoverer has just contacted me with the name he gave it. Poll and thread updated!
Click to expand...

What a jobbie name! Stick with fireflies. LOL

Surprised Newton's Necropolis isn't higher on the list. People finding new galactic records is one of the things exploration (and thus DW2) is about IMHO, and this is a great example of that. Also, thanks to DW2 I can now say I landed a Beluga on the highest gravity landable world known in the entire galaxy without any damage, and that sounds pretty cool to me! If not for DW2 I certainly wouldn't have flown most of the way to the other side of the galaxy just to be able to make such a silly claim...

btw feeling honored that two of my photos were put in this list.

TPot said:
It would be criminal not to have some nod to DW2 at Explorers Anchorage.
Click to expand...

And the Omega Mining Operation, that made it possible.

Due to the fact that the EA region will have a megaship named after the expedition I would rather see attention focused on the wonderful sights that were discovered enroute by commanders.

While I feel a beacon at Explorer's Anchorage and Omega are essential, I also feel that actual new discoveries made during the journey should get more love, so they all got a vote as well.
You must log in or register to reply here.
Share:
Facebook Twitter Reddit WhatsApp Email Link
Top Bottom