Welcome to a brand new week, and one that welcomes Phase 4 of the Odyssey Alpha!

There's a lot going on this week, and moving forward, this is going to become a regular occurrence, especially as we reach the launch of Odyssey and beyond. With that in mind, we've decided to give everybody a look ahead at what's to come each week, so you can plan accordingly! 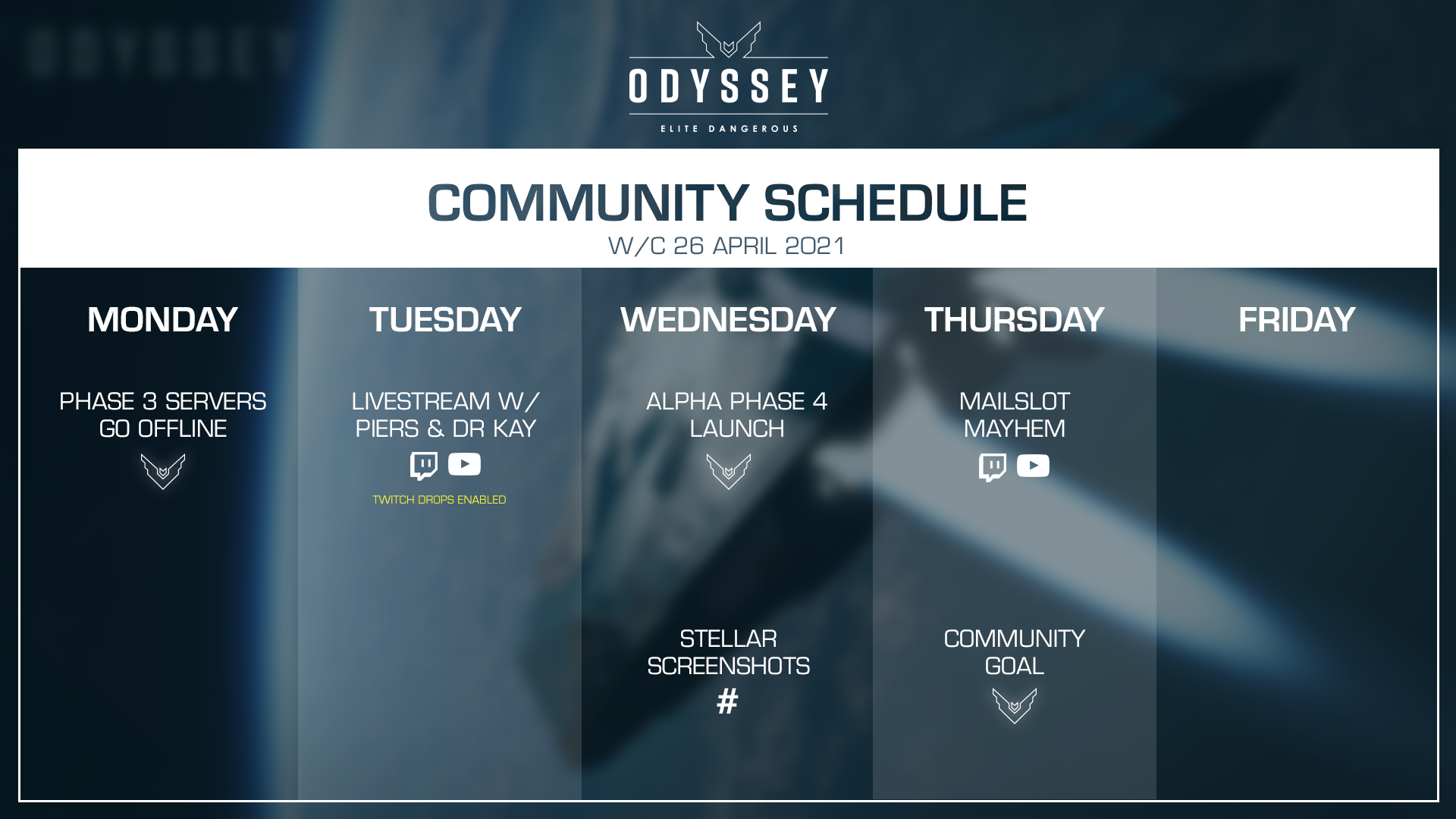 Alpha Phase 3 servers go offline: If you're reading this, it's already happened! We've taken the alpha servers offline to prepare for the launch of Phase 4 on Wednesday.

Livestream with Piers Jackson & Dr Kay Ross: Join us on Tuesday for a special livestream with Game Director Piers Jackson and Lead Render Programmer Dr Kay Ross! We'll be discussing everything from the Odyssey Alpha, including your feedback, changes that we've made, and things you have yet to see! You'll also get another chance to pick up the Purple Flight Suit Twitch Drop if you missed it previously!

Alpha Phase 4 Launch: The compatibility phase of the Odyssey Alpha kicks off on Wednesday! If you've yet to read the details, you can check them out here. The snapshots of your Commanders have been taken, and you'll be placed into the Alpha with your current ship, and the ability to transfer in your other ships at a reduced time and cost.

Stellar Screenshots: We'll be picking the winners for this week's Stellar Screenshots on Wednesday, so make sure to get any entries uploaded by then! You can post them on the forums or on Twitter using #StellarScreenshots. Maybe we'll see your photo on stream!

Mailslot Mayhem: We've been seeing all the Commanders executing slick moves around the mailslot of starports, and want to show you off on stream! As well as attempting the tricks ourselves, we'll be bringing on some guests to show us how it's done.


It's going to be another exciting week in the world of Elite Dangerous, so let's get it underway Commanders!

Piers and Kay together! I'm looking forward to that one!

Always great to hear from Dr Ross, and I can’t wait to see what the game director brings to the stream

Things yet to be seen? I like the sneak peeks

Did they warn you that the penalty for failing to fly through the letterbox blindfolded is to run through the streets of Cambridge naked with only a space loach plushy covering the necessary areas?…

And what time is the livestream and the link?

Gonna need a time on that Tuesday livestream please/

zzehirbazz said:
And what time is the livestream and the link?
Click to expand...

I'm betting they'll be at the usual times. Which means they will definitely change

zzehirbazz said:
And what time is the livestream and the link?
Click to expand...

Greeting Commanders, First off, we would like to give a big thank you to CMDR @NeilF for his great work over on the Livestream Announcement Thread. We have decided to take the pressure and responsibility off of CMDR @NeilF and create our own official thread for livestream announcements. If you...

V
Thanks for this update / schedule of whats going on or going to happen this week. Not hype just useful info for all.

Edit: The Stellar Screenshots link takes you to the info page about them and not to the page for posting them which is on a link in that page so anybody wanting to post make sure you read the post and click the link, or its here

A schedule? Let's see how long this one will last

I know I've posted a few gripes in the feedback threads, but that's the nature of a pre-release test. Overall you've done an amazing job, and although think you're really going to have to do some serious work to get this in release shape by the planned date, what we've seen so far is amazing.

Can't wait to see what standing by my Cutter is like on foot.

And lo, on Friday did they rest.

Rubbernuke said:
And lo, on Friday did they rest.
Click to expand...

Rule No :1 - Never release a new Build on a Friday.

Friday is being kept free for the release of the FAS Crossfire PJ, but it's a super-secret .. shhhhh

Factabulous said:
Friday is being kept free for the release of the FAS Crossfire PJ, but it's a super-secret .. shhhhh

It better. Google is running out of rage memes.

Awesome stuff! I assume Wednesday's StellarScreenshots is at the Tuesday 4:30 timeslot and not the Thursday 7pm timeslot? (if it's even a livestream).

Thanks for the information. Looking forward to tomorrow.


Alec Turner said:
Awesome stuff! I assume Wednesday's StellarScreenshots is at the Tuesday 4:30 timeslot and not the Thursday 7pm timeslot? (if it's even a livestream).
Click to expand...