And it looks like Otis just overwrote his updates file with mine, so older installations should now start updating to 3.44. Woot!

D
I'm having a bit of an issue with EDMC after taking my Carrier on its Exploration tour :


Basically it's acting up while onboard a Carrier and hopping to unexplored (not in EDDB/EDSM) Systems with the Carrier (?)
Anyone else getting these issues? Carrier-related? Issue with Journals?
EDMC is the latest Version 3.4.4.0 for what it's worth , never had such issues with it. DistanceCalc plugin is also updated to the latest version. 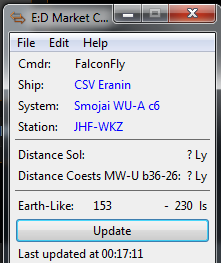 PS.
When leaving the System with a normal Ship and entering the next best Unexplored System, everything is working 100% fine as expected.

Trying to manually upload the Journals to EDSM to feed it the "lost Systems" oddly doesn't work either. EDSM doesn't recognize the System to even exist after entering it with a Carrier.
Seems there's something wrong or different with the Journal/API when being onboard a Carrier and entering an Unexplored System (?)
Last edited by a moderator: Jun 21, 2020

FalconFly said:
I'm having a bit of an issue with EDMC after taking my Carrier on its Exploration tour ...
Click to expand...

It's beeing worked on. Version 3.4.6 (3.4.5 is internal only) will support the new CarrierJump event which will resolve the issue.

A workaround for now would be to exit to the main menu and log back in after every carrier jump (if you jump on the carrier), so there will be a new Location event generated.
Last edited: Jun 21, 2020

gazelle said:
It's beeing worked on. Version 3.4.6 (3.4.5 is internal only) will support the new CarrierJump event which will resolve the issue.

A workaround for now would be to exit to the main menu and log back in after every carrier jump (if you jump on the carrier), so there will be a new Location event generated.
Click to expand...

Also note that EDSM doesn't yet process (but it will store for later processing when the programming work is done) the CarrierJump events. So until EDSM updates you'll still need to do the logout/in thing to have it properly update your location even once I release he EDMC version that handles the event.

For any of you who have been using the pre-release "3.50 beta0" I've just made a "3.51 beta0" release which updates this to include the bug fixes and features I've added ready for the forthcoming 3.46 full release (which will be the last release based on Python 2.7).

Release 3.46
This should be the final release of EDMC based on Python 2.7. The next release after this, assuming this one doesn't introduce new bugs, will be based on Python 3.7. Any plugins that users have installed will need to have been updated to work under Python 3.7 by the time that next version of EDMC is released. During EDMC startup, at most once per day, you might see a popup with the text:

One or more of your enabled plugins do not yet have support for Python 3.x. Please see the list on the 'Plugins' tab of 'File' > 'Settings'. You should check if there is an updated version available, else alert the developer that they will need to update the code when EDMC moves to Python 3.x
Click to expand...

If so, do as it directs and check File > Settings > Plugins tab and see what plugins are listed in the section with the text Plugins Without Python 3.x Support.
If any of your plugins are listed in that section then they will need updating, by you or the original developer, to work with Python 3.7. See Migrating to python 3.7 for more information.
Anyone who wishes to try out the forthcoming Python 3.7-based version should see Release 3.51 beta0, but please do not install that unless you're technically savvy enough to make coherent bug reports, thankyou.
Changes in this version:

I've just made a new thread for these announcements, so that I can edit the OP for each new release: https://forums.frontier.co.uk/threads/elite-dangerous-market-connector-edmc.548869/

Moderators, could you close this thread please (check with Otis if needs be, I can point how to contact by email if you need to).

Elite Dangerous Market Connector ("EDMC") is a third-party application for use with Elite Dangerous. Its purpose is to facilitate supplying certain game data to, and in some cases retrieving it from, a number of websites and other tools. To do this it utilises the Journal Files written by the...

Is the place to be folks.