Elite Dangerous Market Connector ("EDMC") is a third-party application for use with Elite Dangerous. Its purpose is to facilitate supplying certain game data to, and in some cases retrieving it from, a number of websites and other tools.

To do this it utilises the Journal Files written by the game when played on a PC. It also makes use of Frontier's Companion API ("Frontier's CAPI"), accessible once you've authorised this application.

It does not work with Console game accounts, and is no longer supported on Windows 7.

See the link above for more information about what it can do for you.

Whilst EDMarketConnector.exe was fixed for the Odyssey Update 11 difference in Journal file names, EDMC.exe was not. If you're wondering, that's the command-line utility that, for instance, Trade Computer Extensions uses to obtain data.

Unfortunately 5.3.2 failed to fully address the issues caused by the different Journal filenames when using the Odyssey Update 11 client. It's fine if you run EDMarketConnector first and then the game, as the code path that detects a new file always does just that.

But the code for EDMarketConnector startup to find the current newest Journal file relied on sorting the filenames and that would mean the new-style names would always sort as 'oldest'.

This release fixes that code to properly use the file modification timestamp to determine the newest file on startup.

This release contains one change to cope with how Frontier decided to name the Journal files differently in the Update 11 Odyssey client.

This release addresses some issues with newer EDDN code which could cause erroneous alerts to the player, or sending of bad messages.

As has sadly become routine now, please read our statement about malware false positives affecting our installers and/or the files they contain. We are as confident as we can be, without detailed auditing of python.org's releases and all the py2exe source and releases, that there is no malware in the files we make available.

This release is primarily aimed at fixing some more egregious bugs, shortcomings and annoyances with the application. It also adds support for two additional EDDN schemas.

This is a very minor update that simply imports the latest versions of data files so that some niche functionality works properly.

This release fixes one bug and fixes some example code.

This release adds one new feature and addresses some bugs. We've also updated to using Python 3.9.8.

This release primarily addresses the issue of the program asking for Frontier authorization much too often.
Thanks to all that reported this problem, helped track it down, and tested the release candidates.

Release 3.46
This should be the final release of EDMC based on Python 2.7. The next release after this, assuming this one doesn't introduce new bugs, will be based on Python 3.7. Any plugins that users have installed will need to have been updated to work under Python 3.7 by the time that next version of EDMC is released. During EDMC startup, at most once per day, you might see a popup with the text:

One or more of your enabled plugins do not yet have support for Python 3.x. Please see the list on the 'Plugins' tab of 'File' > 'Settings'. You should check if there is an updated version available, else alert the developer that they will need to update the code when EDMC moves to Python 3.x
Click to expand...

A small bug means that popup will never appear, but you can still check File > Settings > Plugins tab and see what plugins are listed in the section with the text Plugins Without Python 3.x Support.
If any of your plugins are listed in that section then they will need updating, by you or the original developer, to work with Python 3.7. See Migrating to python 3.7 for more information.
Anyone who wishes to try out the forthcoming Python 3.7-based version should see Release 3.51 beta0, but please do not install that unless you're technically savvy enough to make coherent bug reports, thankyou.
Changes in this version:

NB: There's some issue with 3.44 updating to this new 3.46. If you use the in-app prompt to install it will kill the old running EDMarketConnector.exe and attempt to run the new installer, but that then fails in some manner and you're left with 3.44 still installed. I'm investigating now.
Last edited: Jul 13, 2020

I'd neglected to properly edit the update feeds file, so it was still pointing to the 3.44 installer file despite saying it was for 3.46. Fixed!

One small bug I didn't catch, that popup warning about Python 3.x and plugins won't ever happen. But if you look on File > Settings > Plugins you will see any plugin without Python 3.x support listed in an appropriate section.

I've also spotted a puzzling issue with the EDMarketConnector.exe not showing the correct icon. This worked fine for the 3.44 build, yet doing that afresh exhibits the same "no icon" problem. It's currently working OK on my Python 3.7 build environment so I'm inclined to just let this slide until the next, Python 3.7 based, release.

It's py2exe that builds the .exe and is meant to take care of incorporating the icon, and nothing has changed about how that is being specified, nor are any errors thrown during the ubild process so <insert shrugging emoji>.
Last edited: Jun 22, 2020

This 3.46 EDMarketConnector.exe icon thing... some of us are seeing the icon, some of us not. I've just checked a fresh build of the 3.44 .exe, which for me doesn't show the icon, and it has an identical SHA256 checksum to the github .msi 3.44 file which does show the icon for me. So this is Windows 10 doing something bizarre.

I've already tried removing %LOCALAPPDATA%\IconCache.db and rebooting, it made no difference.

So, I'm definitely inclined to leave this be given things are still working sanely for me with the python3 branch built using Python 3.7.7.

To 'Change Icon...' in shortcut properties, I just point to the.ico file to fix the missing icon. 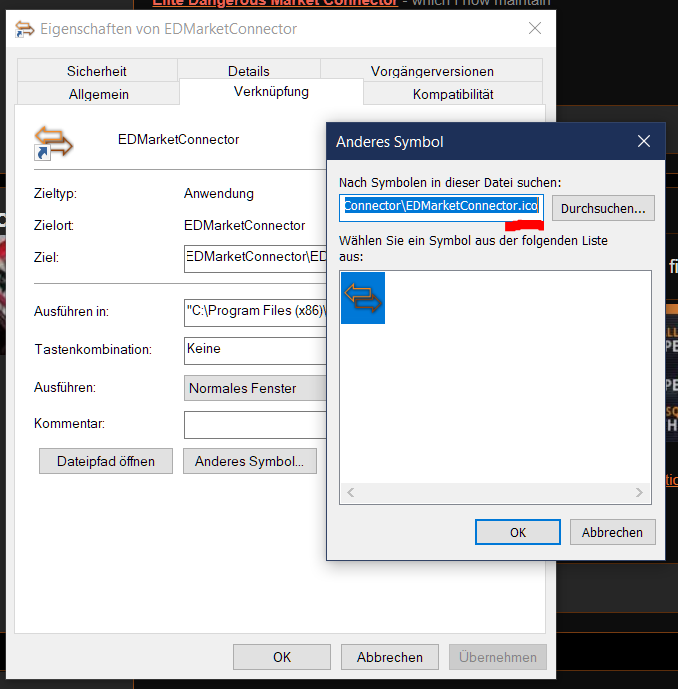 There are some new phrases awaiting translations on https://marginal.oneskyapp.com/collaboration/project/52710 if anyone has the skills for the supported languages. If you find anything you think is wrong and can't edit then poke me to 'Unfinalize' the translation(s). I can also look at adding new languages if there's a volunteer to make a new translation.

Any work ready to go when I make the next release will be included .

NB: If you're helping with translations you only need to care about the ones under the "EDMarketConnector / Miscellaneous" project and not the "EliteOCR / EliteOCR" one!

I'm pretty sure the EliteOCR project has been dead for many years now, made moot by the Journals and CAPI as data sources.

Without providing any logins and passwords from the game itself.

Example:
1. Specify in the EDMS settings where the logs and the key to Inara's website should be stored.
2. Start EDMS and it will automatically fill in the logs on Inara's website.
Last edited: Jul 2, 2020

Without providing any logins and passwords from the game itself.

Example:
1. Specify in the EDMS settings where the logs and the key to Inara's website should be stored.
2. Start EDMS and it will automatically fill in the logs on Inara's website.
Click to expand...

You can then set the options in EDMC so that it only sends to Inara (don't enter an EDSM API Key, and if you really don't want to then disable the options for sending to EDDN). You'll obviously then need to always be running EDMC when you play the game.

If anyone has had 3.50 or 3.51 installed (or running from source) in order to test against Python 3.7 then could you please switch to 3.99.0.0 or the beta branch of the source code. See the first link for Release Notes. If you're feeling particularly brave you could use the develop branch which will have the latest code I've merged in from Work-In-Progress branches.

Check the open Issues before reporting any problems you see. I'll likely be making a 3.99.1.0 pre-release today or tomorrow to fix a few more things.

If all goes well with that then expect the actual 4.0.0.0 release of Python 3.7 based EDMC some time next week.

The next full release of EDMC will be 4.0.0.0. As well as fixing some bugs and including some other enhancements this will be the big move from Python 2.7 to Python 3.7. So, with that in mind, I'd like as many users as possible to install and test this 3.99.2.0 pre-release to help find any new bugs before that big change is offered to everyone.

You can get it from Pre-Release 3.99.2.0 . Install by simply running it. It's the same as if EDMC offered you a new version and you went through with installing it.
As always, please report any issues on GitHub. If you want to discuss or check anything first then find us in the #edmc channel of the EDCD Discord Server.
You should read all of the changelogs for 3.99.0.0, 3.99.1.0 and 3.99.2.0. I'll make the easy by pasting them here:
3.99.0.0

the usage of EDMC.exe (which TCE is using) from the V3.99.2.0 installation producing an error on any command line parameter (-o/-m/-l etc.).
The error message is "Can't read Journal file: b"name 're' is not defined".
Also the -v parameter reports the version 39.92, which is also wrong.
EDMC 3.51beta is working properly.

Hopefully you find the issue before release, otherwise the TCE users will take out their torches

I can't report it on Github actually, cause my account there has an issue, so I can't login. Hope this get fixed by Github any time soon.
Last edited: Jul 7, 2020

eventure said:
Hopefully you find the issue before release, otherwise the TCE users will take out their torches

I can't report it on Github actually, cause my account there has an issue, so I can't login. Hope this get fixed by Github any time soon.
Click to expand...

I've opened this issue for it and will take a look in the next day or so latest.

eventure said:
I can't report it on Github actually, cause my account there has an issue, so I can't login. Hope this get fixed by Github any time soon.
Click to expand...

I've made a new release with just these fixes and an updated Swedish translation: Release 3.99.3.0

Athan said:
I've made a new release with just these fixes and an updated Swedish translation: Release 3.99.3.0
Click to expand...

installed 3.99.3 allways get the "server down" message, is the server actually down or is a bug too?