We are very excited to bring you a new Jurassic World Evolution 2 Feature Focus. Previously, we talked about the various improvements that have been made to the Guided Tours you can add to your parks. This week we're taking a look at where you'll be building your parks. It's time to talk about environments!

Jurassic World Evolution 2 will let you build dinosaur parks and facilities across a wide range of environments. All modes will let you experience different environments and settings as you play, and the environments all have their own characteristics and scenery, making them feel distinct and unique from each other. There are also different kinds of decorative rocks, shrubberies and vegetation that come with each environment. You can use these to add a little something extra to your parks.

Desert
The desert environment will be the first place you go when you start up Jurassic World Evolution 2's Campaign Mode. You will also be able to build a desert park in Sandbox, Challenge, and Chaos Theory Modes. It's inspired by the real life Sonoran Desert, with its dry climate and flat terrain. Expect to see a lot of cacti and shrubs that would usually thrive in a desert environment alongside dirt, sand and the occasional rock and tumbleweed.

There won't be a lot of rain, but you may be forced to tackle the odd sandstorm, which can gum up the works on your vehicles and cause a bit of damage. You'll see the sandstorm coming in, growing in density as it whips up the dirt and sand around your dinosaurs and buildings. 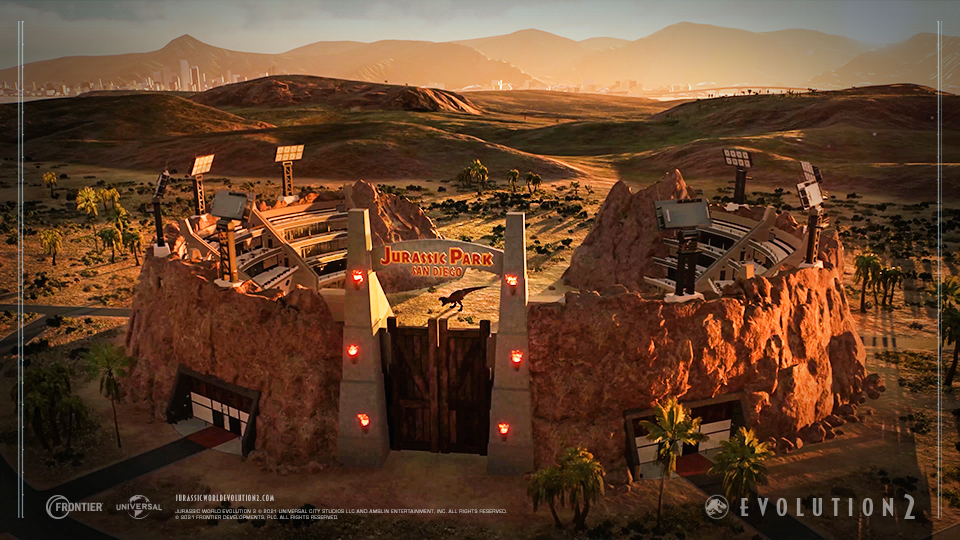 Taiga
The taiga Environment is inspired by mountainous forests of British Columbia, Canada. You'll get to build and house dinosaurs in a taiga environment in Campaign, Sandbox and Challenge Mode. It's quite a different environment from the desert, offering shades of green and auburn pines, in addition to snow-covered peaks in the background. Expect sunshine and dense forestation around you as you build your parks and facilities.

Taiga introduces one of the other new calamity types: snowstorms. When a snowstorm sweeps in over the area, you'll see thick flakes falling from the sky, and snow piling up on the ground and on building surfaces. If you've ever wanted to see dinosaurs in the snow, this is the environment for you! 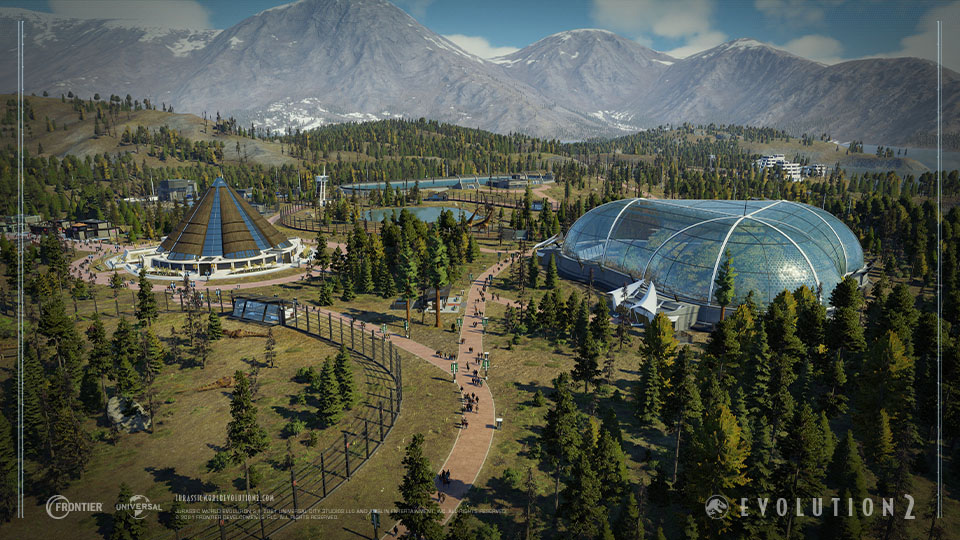 The temperate environment is characterised by lush and leafy trees, and a warm sun shining down from the blue skies above. While there will be less snow, you should expect some mist, and maybe the odd rainstorm. What you really need to be careful of though, are the tornadoes. 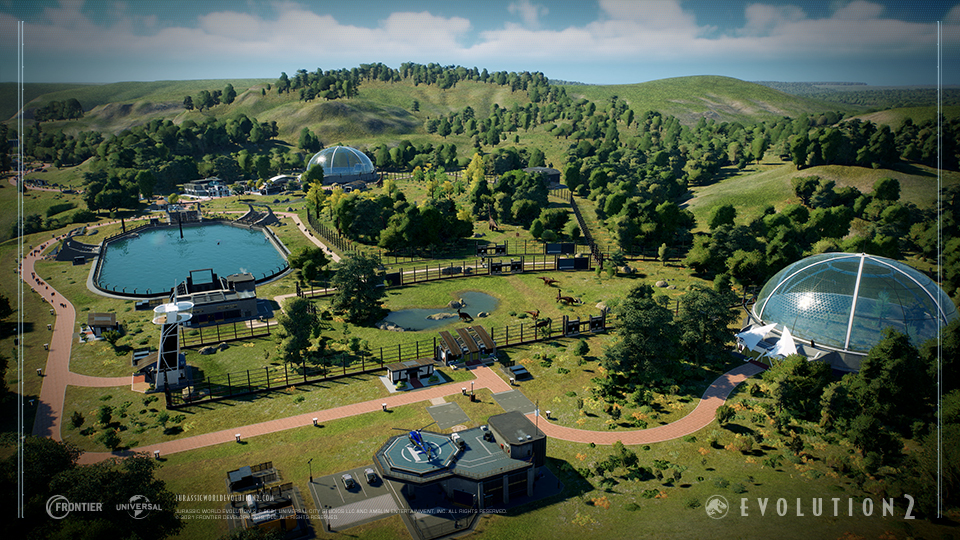 Tropical
It wouldn't quite be an authentic Jurassic World gaming experience without a tropical environment. Inspired by the Hawaiian islands of Oahu and Kaui, the tropical environment isn't featured in the Campaign, but will depict Isla Nublar and Sorna in Chaos Theory and Sandbox Mode.

As you would expect, this environment is sunny and quite warm, offering up a beautiful climate for both your guests and dinosaurs. Be mindful that there's a potential for tropical storms and hurricanes. Heavy swirling rain will come blowing in on howling winds, causing damage to its surroundings. Don't forget to keep some extra shelters open, just in case! 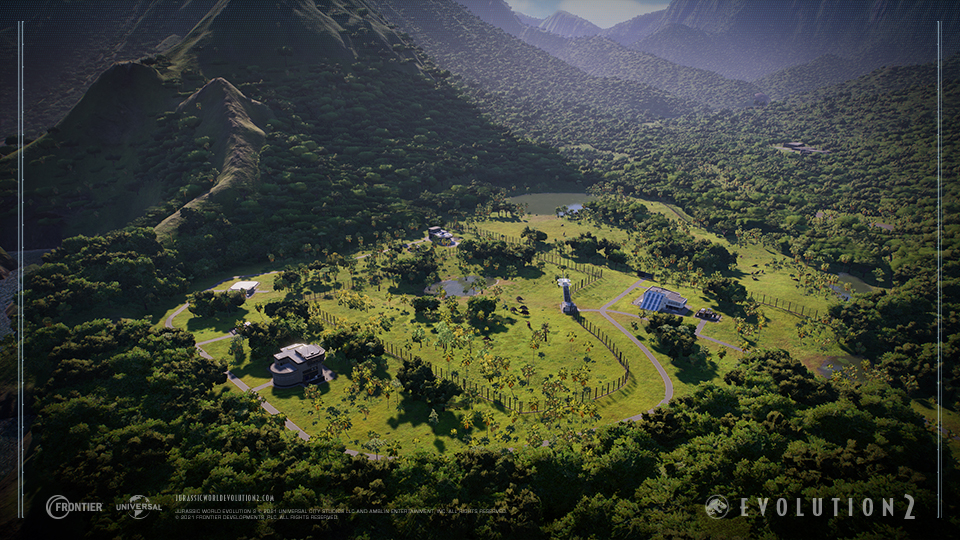 The alpine environment's bright sunshine is broken up now and again by some light rain, and you may need to contend with the odd snow and rainstorm when building in this environment. 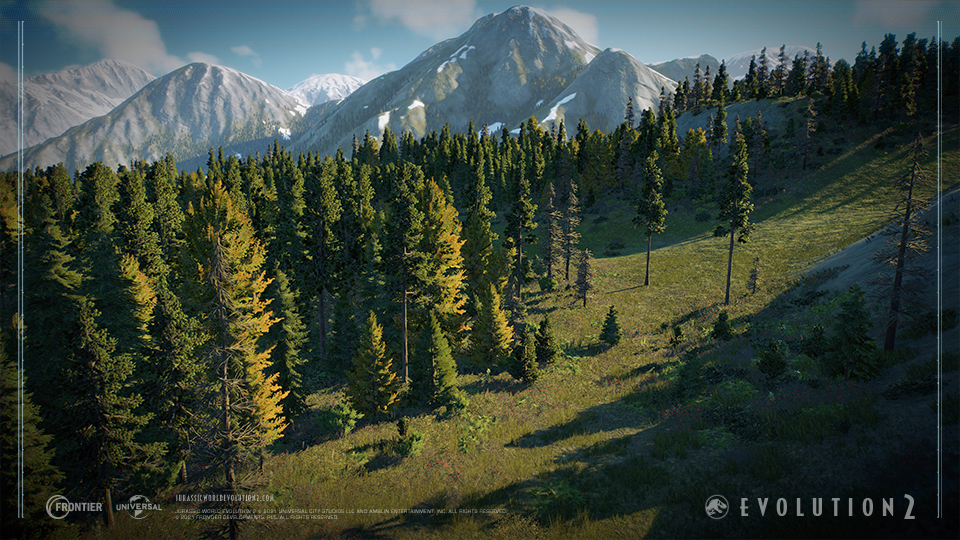 That's it for this Jurassic World Evolution 2 Feature Focus! Of the five environments we've shown you, which one stood out to you? Which one are you most looking forward to exploring? Let us know in the comments below! Join us for our next Feature Focus, where we'll be taking a look at the different calamities you'll be facing in the game.

Jurassic World Evolution 2 comes to PC, PlayStation 5, Xbox Series X|S, PlayStation 4 and Xbox One on 9 November. You can pre-order now to get access to a set of vehicle skins inspired by The Lost World: Jurassic Park for use in Sandbox and Challenge Mode.

M
Huh, wasn't expecting Alpine as the last biome, I was guessing Prarie for the Great Plains region or Wetlands for the Gulf Coast region. Guess that means the wild Dinos haven't gotten too far east from their original release in California?

I'm very glad that disasters are biome dependent. Even if some of them are just cosmetic differences, the variety is much appreciated. I might run more than one map in challenge mode now!

I'm curious if there are any more mechanical differences between biomes. I noticed none of the dinos in JP:San Diego needed forest in their environment, any chance this was because they were in the desert biome?

Midoriki said:
I noticed none of the dinos in JP:San Diego needed forest in their environment, any chance this was because they were in the desert biome?
Click to expand...

Those dinosaurs will still need forest in other enclosures as well. It's connected to what kind of Paleobotany they need in their enclosures.

B
Each biome looks incredible. I was really thinking that the last biome would be a temperate redwood forest. But I do see some redwoods in the taiga biome picture. Can we place those separately like in JWE 1? Or are they a paleobotany item? That would be really cool to watch a Brachiosaurus or Mamenchisaurus eat from one of those!

Alpine! Awww I was hoping for ruined cities, but alpine is great.

V
The Taiga, Temperate and Alpine biomes are very beautiful. Can't wait to build there.

Jens Erik said:
Those dinosaurs will still need forest in other enclosures as well. It's connected to what kind of Paleobotany they need in their enclosures.
Click to expand...

Ah, so it was just a coincidence that none of the San Diego dinos needed Forest and nothing to do with the biome then. Thank you for your response!


bhoefert said:
Can we place those separately like in JWE 1? Or are they a paleobotany item?
Click to expand...

One of the "Forest" brushes paints redwoods in the Taiga biome (maybe other biomes too?) BestInSlot uses it briefly at 14:00 in this video.

G
This certainly answers so many questions I had regarding the five different environments!

But first off, there is a brand new question I have that has me thinking. Perhaps the Alpine was already shown since day one? Because he Alpine and Taiga environments look almost exactly alike from my perspective at first glance. Meaning, could some of the images and video shots of, what some like myself thought, what was just more Taiga was really the separate Alpine biome this whole time, since the announcement day?

On to my answered questions though, it’s now known:

1. The remaining two environment names are “Tropical” and “Alpine”.

2. They each have their own unique set of foliage and rocks (although I’m still not entirely sure any of those two placeable features can be carried over to different map environments like I know the paleo plants will).

3. What kinds of weather effects they all have (some of which are dangerous).

4. The setting of the campaign, which takes place in the USA, is limited to the more West quarter or third of the country, rather than expanding further East which I did have my high doubts on.

5. The “Tropical” biome is exclusive to Isla Sorna and Nublar. I had difficult questions as to how the said environment would work because I honestly thought the Campaign would utilize all 5 environments, not 4. One Theory I had was, if the Tropical environment will be a thing beyond Chaos Theory and in the Campaign, the only best USA option I could think of was the Hawaiian Islands themselves because they did have their own fare share of “dino incursions” in-universe, which was an encounter with the Mosasaurus at the end of Fallen Kingdom and in a subsequent motion comic video by the JW YouTube channel that expands that short scene. You know: Going to the Hawaiian islands to deal with the Mosasaurus and whatever else there.

It’s also interesting that Challenge mode doesn’t seem to use all other maps in the Campaign or Chaos Theory modes. I thought it would like what Challenge did with every of the 12 map in the first game’s respective 3 Campaign scenarios.
Last edited: Oct 15, 2021

Is missing foliage between biome maps in the cards? For example, will we be able to put cacti in the alpine or tropical maps?

T
Is that a megalodon in the lagoon?

TheGamingDino133 said:
Is that a megalodon in the lagoon?
Click to expand...

No. It’s a marine reptile of sorts. Something Jens confirmed in the subreddit regarding all aquatics.
Last edited: Oct 15, 2021

L
The image of the tropical biome can be Isla Sorna for the What if Jurassic Park III?

For sandbox i hope there are options to have mist or fog turned on. Esp in tropical biomes or cold biomes like alpine and taiga. Would love to always have fog in my park like the novels.

Hououin Kyoma said:
For sandbox i hope there are options to have mist or fog turned on. Esp in tropical biomes or cold biomes like alpine and taiga. Would love to always have fog in my park like the novels.

I mean, @Jens Erik greater weather controls would be nice.

Jens Erik said:
Those dinosaurs will still need forest in other enclosures as well. It's connected to what kind of Paleobotany they need in their enclosures.
Click to expand...

These are wonderful environments and the variety of different weathers and effects (a mist effect!!) make each area come with its own unique challenges. I'm hoping in the future that Evolution 2 may get more DLC post-Dominion, like a map set in the arctic where its always snowy with the added challenge of potentially needing heaters. Post-Dominon possibilities are endless now. Come on November 9th!

TheGamingDino133 said:
Is that a megalodon in the lagoon?
Click to expand...

Are you the Developers going to add the Carolina swamps or the Florida Everglades as another optional area For wetlands? Because I would love to see my Baryonyx Suchomimus and Spinosaurus enjoy their time in either swampland but I think Carolina swamps is actually the best environment for our dinosaurs. At least a Sandbox swamp map would be good 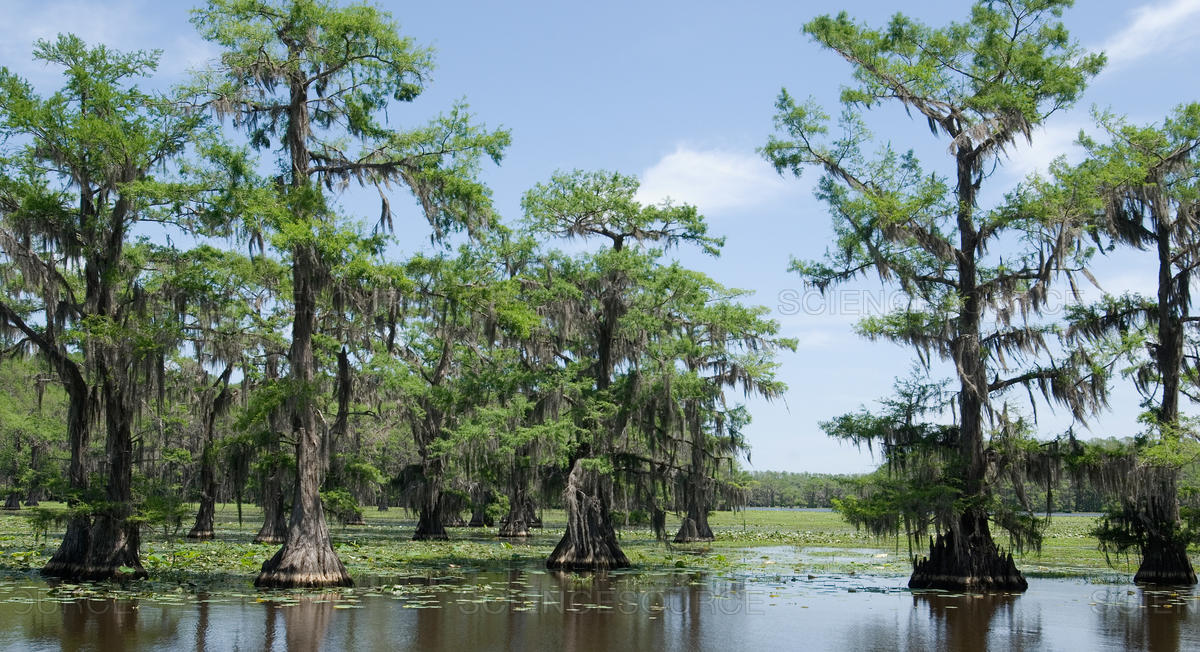 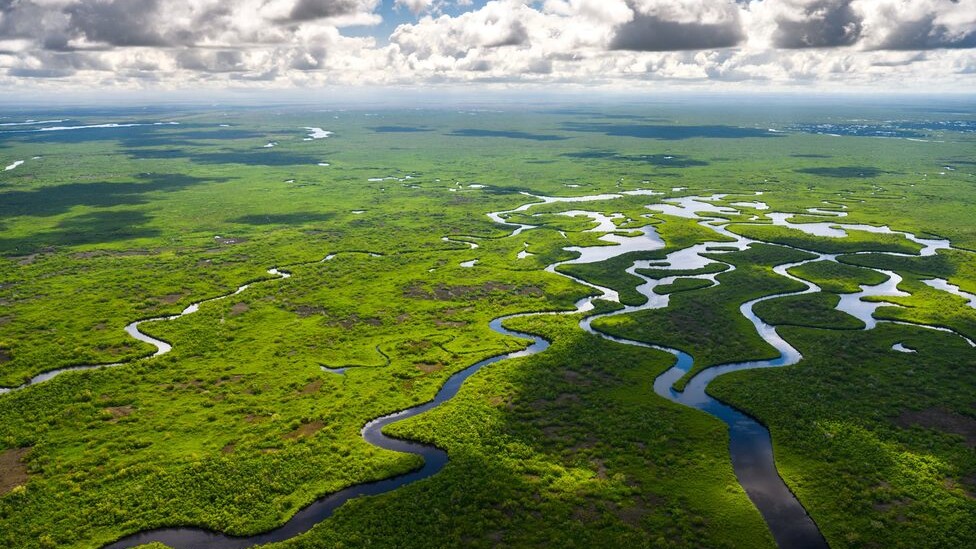 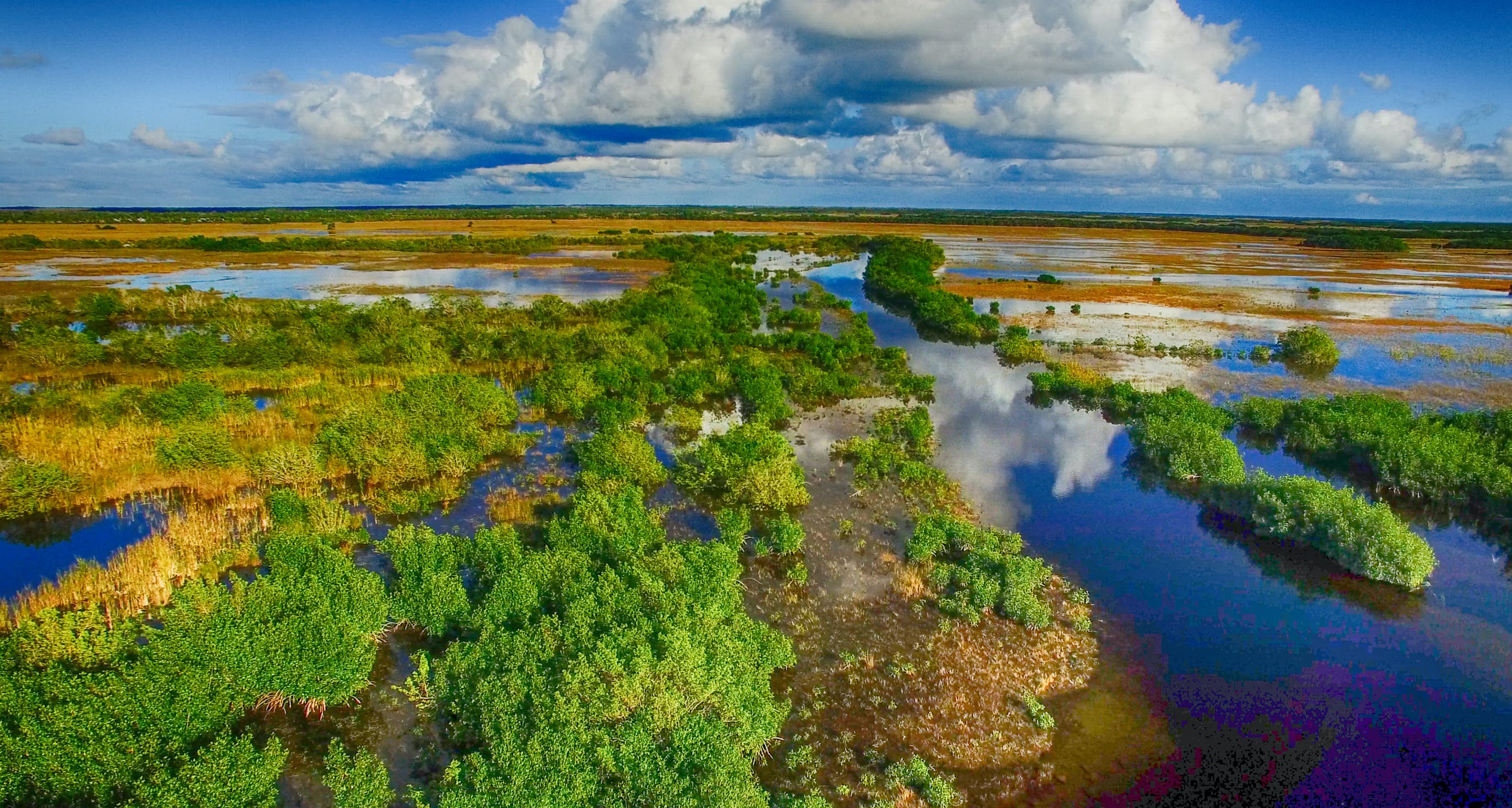 I would have gone with a subtropical bayou (like what you find in the Deep South) for the fifth biome instead of alpine, which is essentially a higher-altitude version of taiga anyway. A lot of the dinosaurs from Cretaceous North America would feel right at home in a bayou anyway.

Alternatively, a savanna biome would be cool for Sandbox mode at least. You would have rainstorms in the wet season and sand storms in the dry.

Hououin Kyoma said:
For sandbox i hope there are options to have mist or fog turned on. Esp in tropical biomes or cold biomes like alpine and taiga. Would love to always have fog in my park like the novels.

This. I wanted this as soon as I heard about the mist weather effect. I want my Isla Nublar tropical biome covered in mist/fog just like in the novels. Isla Nublar means cloud island after all.

I really do hope we get to choose weather effects for the sandbox on certain Islands. The mist effect would go great on Nublar and Sorna.