Hello Commanders, and welcome to the first Featured Event thread of 2019! Falling under "Featured Commanders", Featured Events will take a look at past, present and upcoming events taking place in Elite Dangerous and organised by our awesome Commanders! 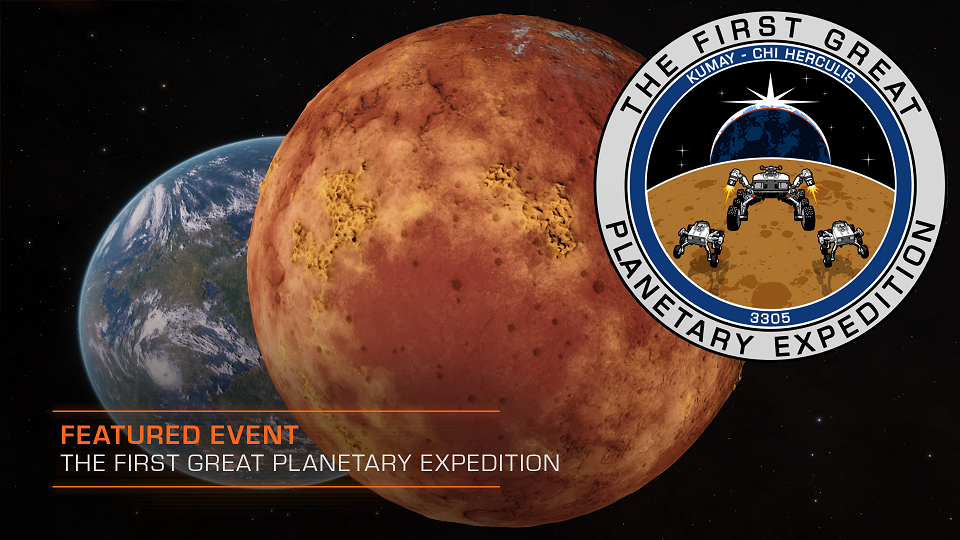 Today we're talking to the organisers of The First Great Planetary Expedition.

Hey guys, explain a little bit about your event to us. What's it all about?
We're in association with the Planetary Circumnavigation Club (a group devoted to driving SRVs around planets and moons), and we'll be driving around the entire circumference of Kumay!

The planet is around 4,000km in circumference and we'll be taking a vaguely polar route, with detours past as many of the planet's best locations as we can. These will include a number of geological surface sites, as well as areas like The Fire And Ice Mountains, Knievel Jump, Manaslu Peak, The Lithops Mesa and Grim Face Crater (all of which were found and named by members of the team during an extensive geological survey).

Basically, it's an expedition in the great tradition of Elite expeditions but, instead of exploring the galaxy we're focusing on one, carefully selected moon.

Where is Kumay if anyone should want to check it out?
Kumay in the Chi Herculis system.

When is the event due to take place?
We're aiming to start towards the end of March 2019.

Do you have a message for the community?
I won't lie, this is a tough expedition which requires a certain level of proficiency in handling the SRV in order to complete it successfully within the time scale (around a month). That said, anyone who wishes to join us is more than welcome. We have a range of driving abilities on the team already including a number of experts who'll be more than willing to help as much as they can. It's going to be an absolutely incredible experience which you'll remember forever!

And, how can others join in this great venture?
You can find more information here.

This sounds fantastic and we're super excited to see how the expedition goes!

If you're reading this and would like to be interviewed as a Featured Commander, apply here.

We now have a firm start date for the expedition of Wednesday 27th March 2019 (that's just over 6 days from now).

See the linked forum thread and/or Discord for further details.

We also have a website for the expedition which features an interactive 3D map of Kumay showing all the surface POI's and waypoints, a table explaining the route in more detail and a running countdown to expedition launch time.

http://www.buckyballracing.org.uk/kumay.html
Note: this expedition is not affiliated with The Buckyball Racing Club (aside from the involvement of yours truly) - we're simply stealing a small corner of their website to host our map.

Paige Harvey said:
The planet is around 4,000km in diameter
Click to expand...

I'm all ready to go. Hauled butt back to the bubble, went and mapped Kumay, went back to Galileo Station to sell the data and outfit one of my ships with a bunch of SRVs. Now I'm just waiting for the starting gun. Looked like a beautiful planet for the event.