Well, we didn’t have a dedicated animal wish list for quite a while. So I thought: why not mine, now?
I’ve posted this in another thread already but want to highlight it again due to a recent YouTube discovery.

I don’t want to write page-long lists, but concentrate on a currently not well represented group of animals: goats and sheep.
We have a multitude of antelope species in the game right now, but unfortunately non of the former.
Yet there are beautiful ones (not an exhaustive list):
Especially the last one would be so great!
You don’t believe me?
Have a look at the following video:
Source: https://m.youtube.com/watch?v=jxMC7rVJoX0


Don’t tell me this isn’t the cutest animal baby possible! Tapir babies might have their stripes, but this one has it’s fluffy!

*) And when I am at it ... other alpine animals would be great as well, for example marmots. I really want to create more rocky habitats with slopes. (I did so for my Snow Leopard already and found it very satisfying.)
Last edited: Oct 20, 2019

so Alpine Ibex is the correct english term, i thought it is capricorn. and again I learned another thing
back to topic, yes goats i so love goats, also some common goats in petting zoos, I remember the fun i had visiting Munich´s zoo years ago several times, I always started with the petting zoo in the early morning, so I was basicly alone there, those goats can be very entertaining.
I am also hoping for more alpine animals

P
We need at least one mountain ungulate! They have such unique exhibit designs.

Alpine ibex / mouflon / chamois would be useful to boost the number of European animals in the game. Same for bighorn / Dall's sheep / Rocky Mountain goat for North America.

I agree, these are much underrated species and I would love to see at least a couple in the game.

It'd indeed be weird if no caprid is included in the base game. My guess is we'll have at least one, most likely the markhor or the alpine ibex. Apart from all those mentioned already, it'd be great if we could get some unique species such as the Mountain goat, Walia Ibex or Barbary sheep at least later in DLCs.

Personally I would rather have another species than the walia ibex as there aren’t any in captivity.

Mountain goats and Barbary sheep are hardly unique...also what we really don't need is yet another african ungulate

Well, at lesast the mountain goat looks unique enough with its sturdiness, pointy little horns and white fur - and it's N-American, rather than African (on which I might agree).
I believe, it's a worthwhile candidate!

The more ya know.

When I said unique I meant the way they look, not how abundant those species are or anything.
I've been reading the complaint about African ungulates for a while now and I don't quite get it. The problem (if there is any at all) is not about ungulates but about the amount of African animals. The ungulate/feline species ratio in Africa and, to an extension, the World is massive yet I don't see anyone complaining about the amount of felines in the game. Same goes for bears, for instance.
I just think the more animals the better, regardless of their taxonomy or location. This game could easily last a decade (just like ZT2) as their DLC possibilities are almost endless. So let's wish that, sooner or later, they'll include enough goats so that we don't have to even care about where they come from!

random goat said:
yet I don't see anyone complaining about the amount of felines in the game. Same goes for bears, for instance.
Click to expand...

Cause they are people's favourites...also the amount of bear species was discussed here quite a lot actually

Agreed with both all OP mentioned,and barbary sheep.

Did you also know that said pupils will rotate to stay parallel to the ground, no matter what angle the animal's head is at? This ensures the animal's peripheral vision is at its max while grazing.

Y
I think what will happen is that the goats will appear in regional DLCs, each at a time. Perhaps we'll even be surprised and one of the mwould make it to launch.

Thought I would bump this thread to give my support. I would love to see wild sheep and goats come to the game at some point - I am always surprised at how diverse they are as a group. I really like the takin, dall sheep and either Alpine or Nubian ibex.

The other goat I would love to see is the Sumatran serow. It lives in a rather unique habitat for a goat (on sheer cliffs in Southeast Asian rainforests), is kept in several zoos in that region and is becoming increasingly threatened in the wild. I find them unconventionally beautiful animals, which look both out-of-proportion and yet graceful simultaneously. I have put a link to a picture below of one in a zoo in Thailand. 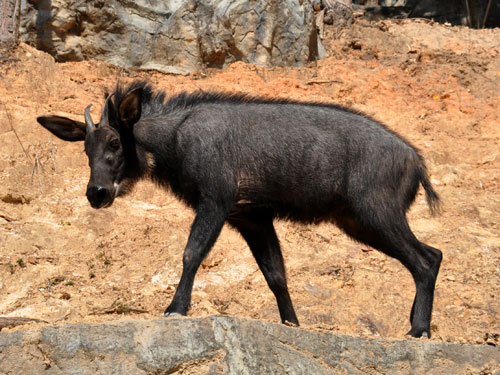 Not exactly goats or sheep ... but yea!

Beside the fact that goats and sheep do tick that box as well, I would love to see more mountain dwelling animals in Planet Zoo.
Those camelids definitey qualify!
Last edited: Dec 3, 2019

P
Well we are getting our first goat/sheep species next week!

Pteronura said:
Well we are getting our first goat/sheep species next week!
Click to expand...