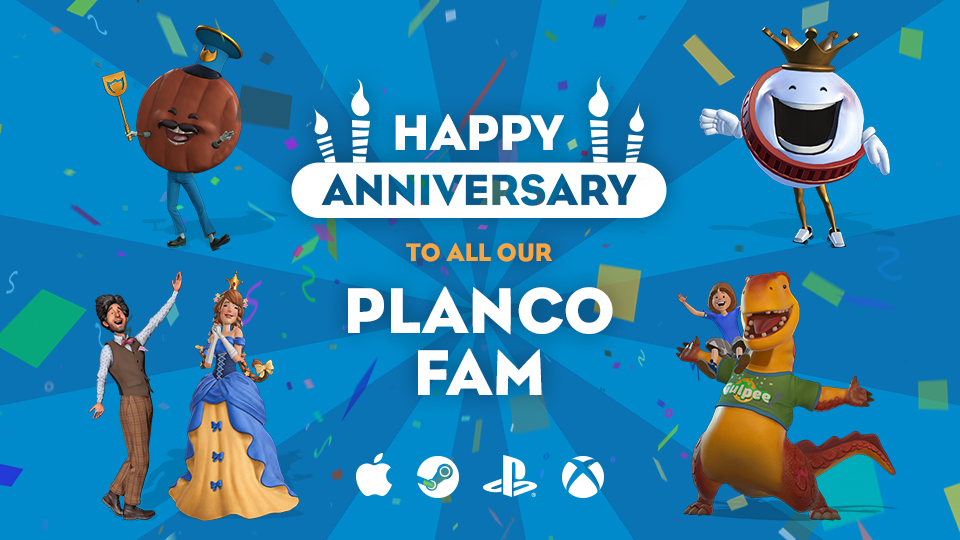 ​
To commemorate the occasion, we're asking you to share some of your favourite ever PlanCo builds in this thread - whether it's an entire park built by you, or some incredible scenery from the Steam or Frontier Workshops, we want to see something you love!

Pssst! We're also giving away some Planet Coaster DLC codes on our social channels, so head over to Instagram, Facebook, or Twitter to be in with a chance to win! 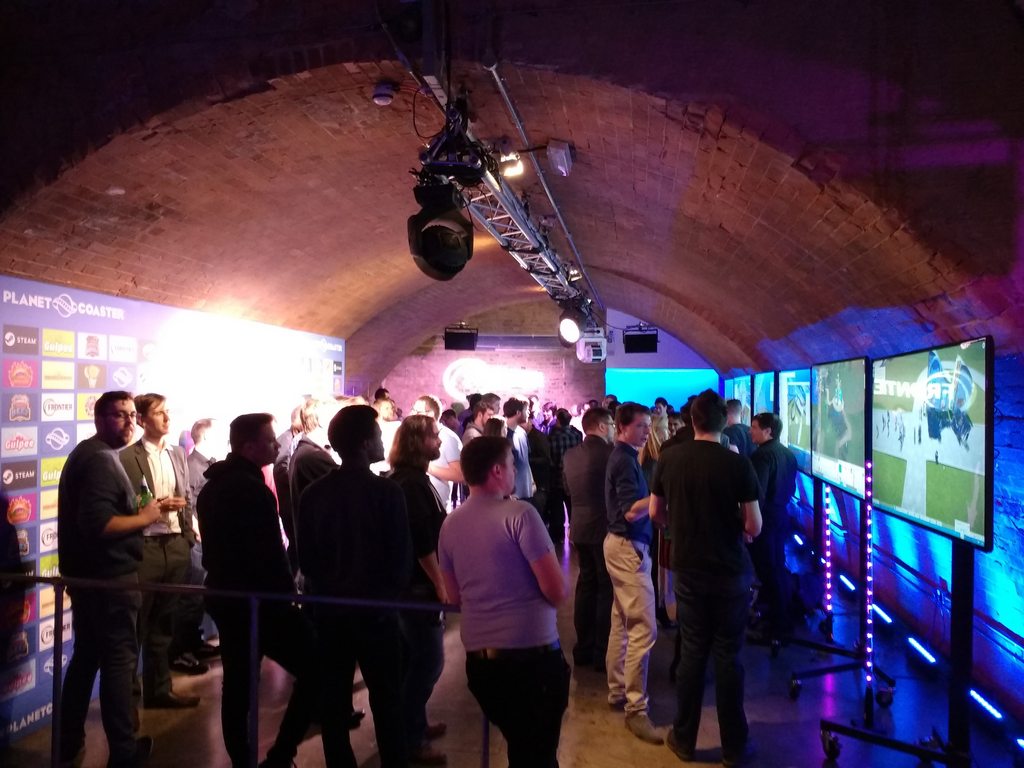 I've only built one thing in Planet Coaster, which was for the racetrack competition many years ago. It's not great, and took me a looong time to build the surroundings. Although the final thing might not be amazing I am still happy with the concept of a double helix track

I wanted to make a Castle theme, with knights moving around and a Dragon at the top. I seem to remember making fireworks go off as the karts drive along the battlements too 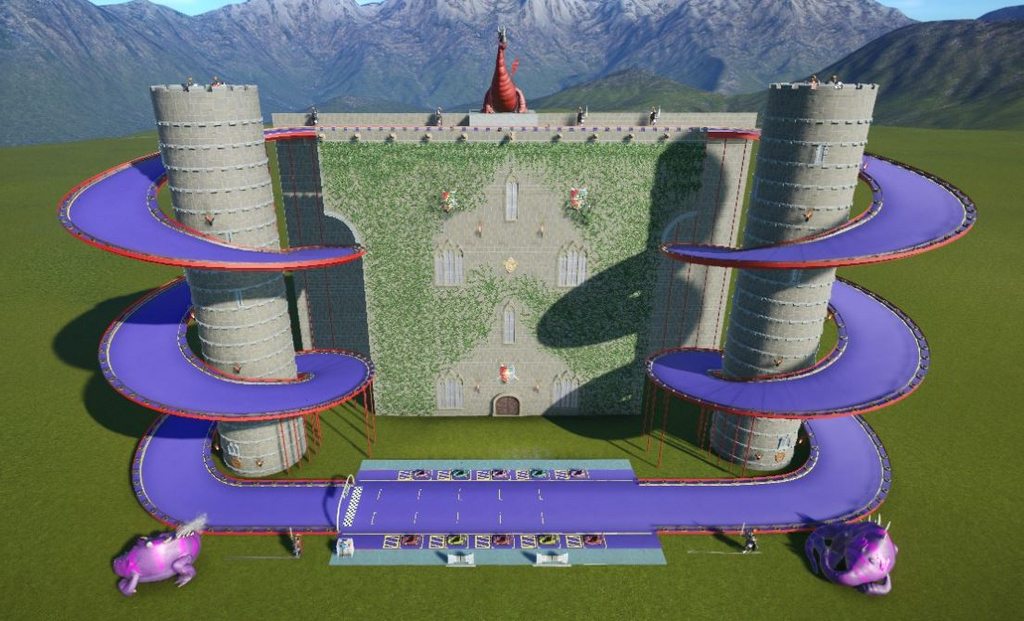 Happy Birthday Planet Coaster! I too attended the launch event and met Sam, Nick and others from the team. It was a fantastic experience.

I've created several rides and parks but I guess my most prominent public contribution to Planet Coaster was The Cube - the very first item to be published in the Steam Workshop when it was launched. Something I'm very proud of to this day: https://steamcommunity.com/sharedfiles/filedetails/?id=1569597014 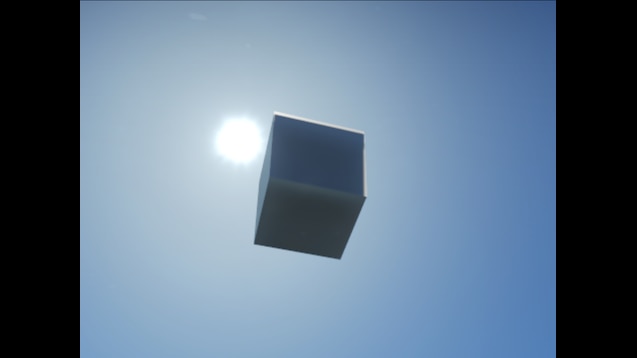 Well done to the entire team for producing such an engaging and enjoyable simulation.

millstonebarn said:
I've created several rides and parks but I guess my most prominent public contribution to Planet Coaster was The Cube - the very first item to be published in the Steam Workshop when it was launched.
Click to expand...

All hail THE CUBE!!!

So hard to imagine the release was 5 years ago already. Which also means that the whole Early Birds / Alpha experience is close to 6 years ago. I have lots and lots of good memories from back then.

I remember the special Friday afternoon reveal for the early birds. I remember refreshing the page like a 1000 times to see if the secret was out yet. Sometimes it was a piece of scenery, sometimes a new ride.

I also remember the very first real livestream with John Laws. This stream confirmed this game would be THE new game when it comes to theme park simulation. I recently re-watched the whole stream and what a trip down memory lane it was.

I can probably write a thousand more memories and special moments but they can all be summarized by saying it were very special and beautiful times!

Hopefully we can create new ones with Planet Coaster 2 someday in the future. For now thanks for all the memories!! And a very happy anniversary!

Frontier
Aww, it's so nice reading all these memories, y'all

& Ozric, I LOVE your racetrack!

Frontier, Thank You for making the best game ever!! Planet Coaster is amazing. Happy 5th Anniversary!!

It's really sad, but I told you so.
There is still a lot of requested content which they could easily have been added...
But obviously there's no intention to do that.

rct-uwe1 said:
It's really sad, but I told you so.
There is still a lot of requested content which they could easily have been added...
But obviously there's no intention to do that.
Click to expand...

Maybe try to see it from a positive side ...

Planet Coaster was really great and in my opinion the best game ever. But it also has it's limits. There were a lot of community wishes that made a lot of sense that simply couldn't be added for technical reasons. Had they still tried to squeeze it into this game, it might not have worked the way it was intended.

Planet Coaster is awesome for what it is, it was great to see how "we" even surprised the developers in the way we used the tools they given us. I'm sure this game was also a journey for the developers and I'm pretty sure that if they knew 6 years ago what they know now, some things would have been different. And that's not mend as a critique!

Let's keep our fingers crossed for a Planet Coaster 2 in the future that will carry out all the good from this game, and add a world of new possibilities. But for now celebrate the 5 years of awesomeness this game has given us!

There's no question that Planet Coaster already allows us to to create epic parks never seen before! And this is really welcome.

I wasn't talking about new features in special.
I know the name is Planet COASTER, but there is a very small selection of other rides. We all know that even the basic rides (placed in nearly every theme park) dindn't made it into PC.
It feels like I could create avpark with fantastic themed areas but just can't fill it with rides...

I have quite a few builds that I'm really chuffed with but I'll try and narrow it down to...erm...a few...

Park entrance (it's come a long way from what it used to be). Note the Fantasy Castle in the background - better known as the 'Pass the Park Castle', after last year's awesome project for which it was built: 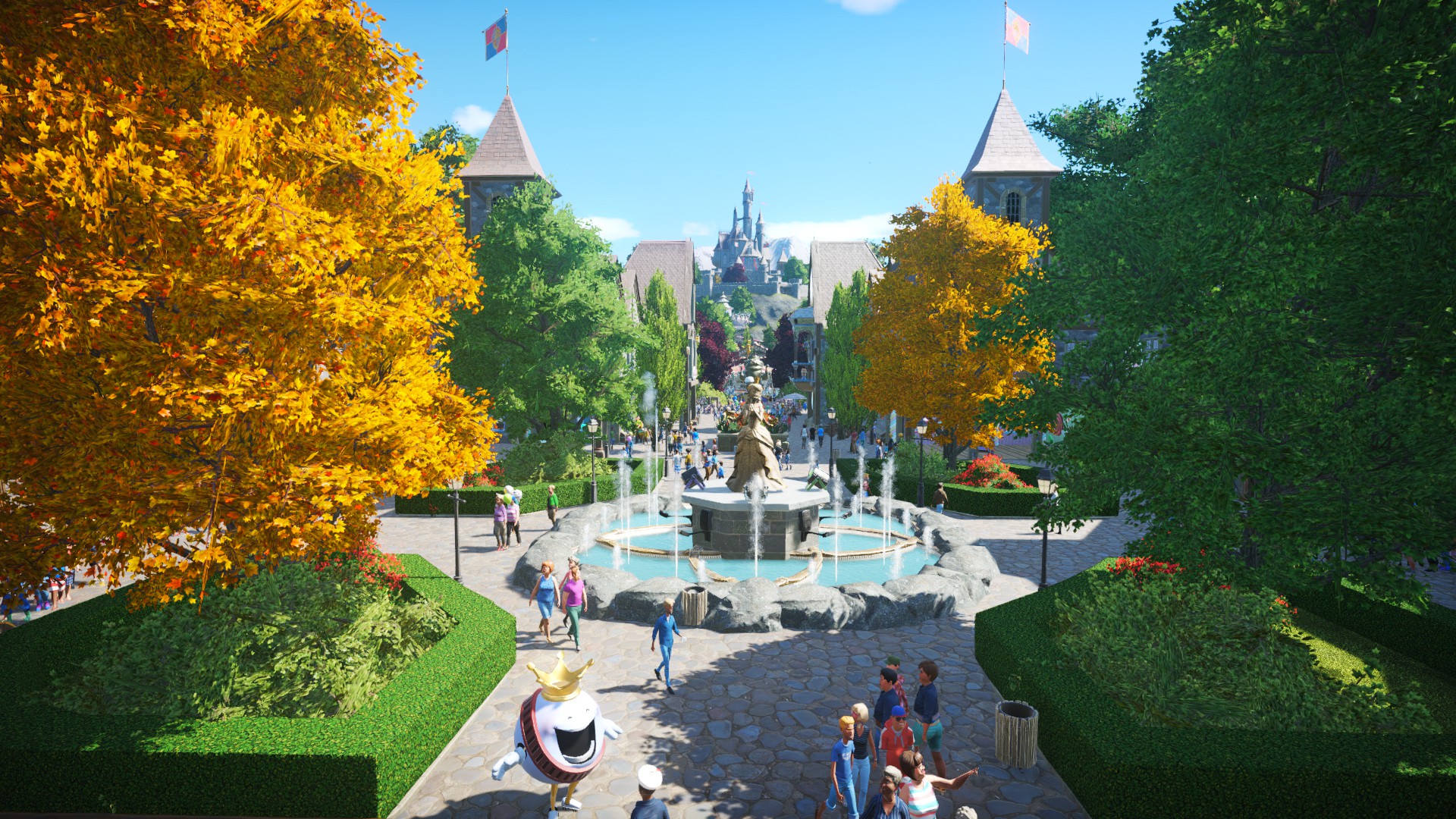 Humunga - one of my oldest and more beautifully themed coasters, having been built way back in 2017, only more and more has been added to it over time. 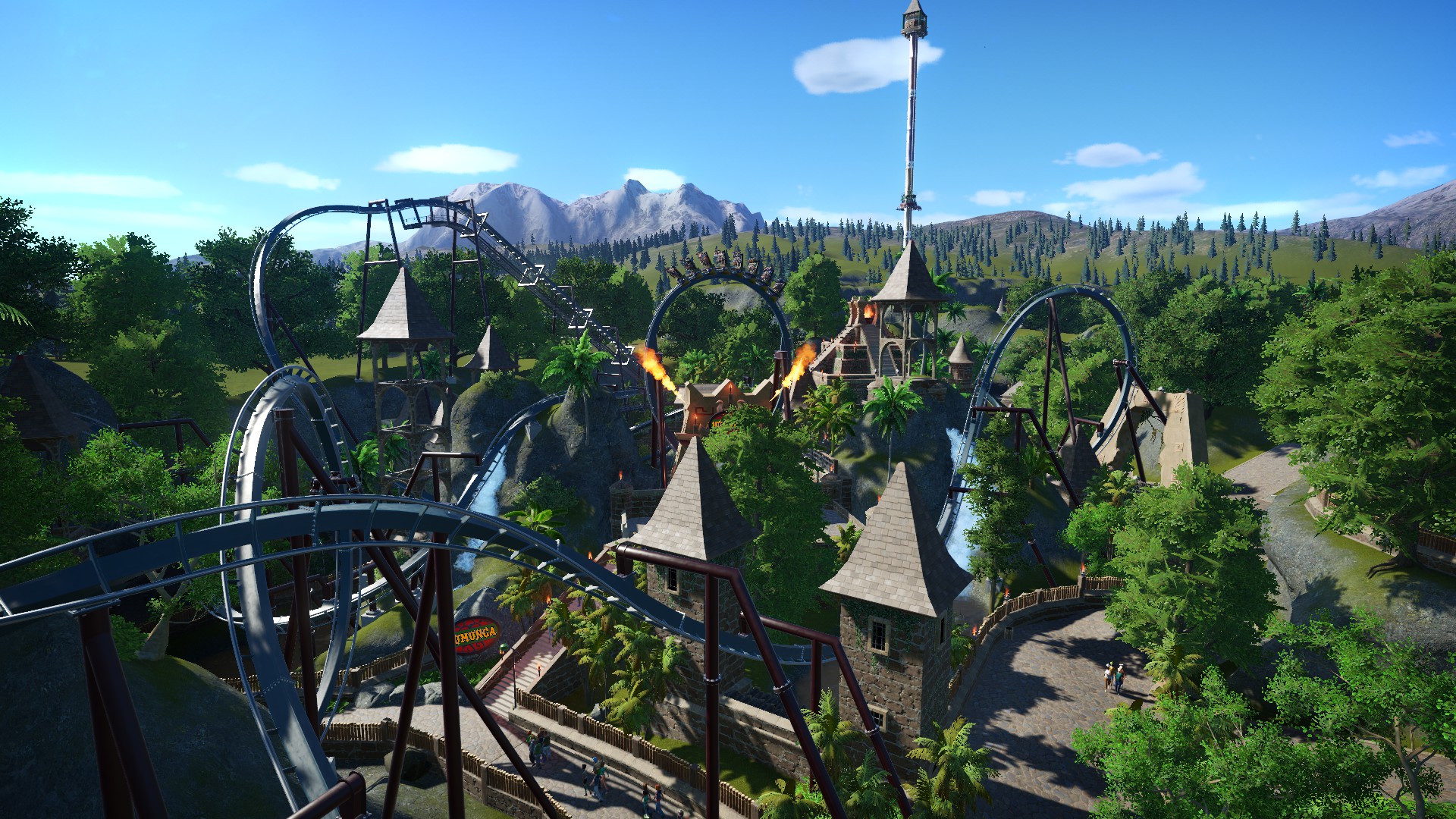 Sakura Valley is undoubtedly my most beautifully themed area, inspired off my ever-growing passion for mindfulness, meditation and nature.

Palace Chang'e, in the background, unexpectedly lives up to its name with the temple silently drifting off towards the moon after dark! 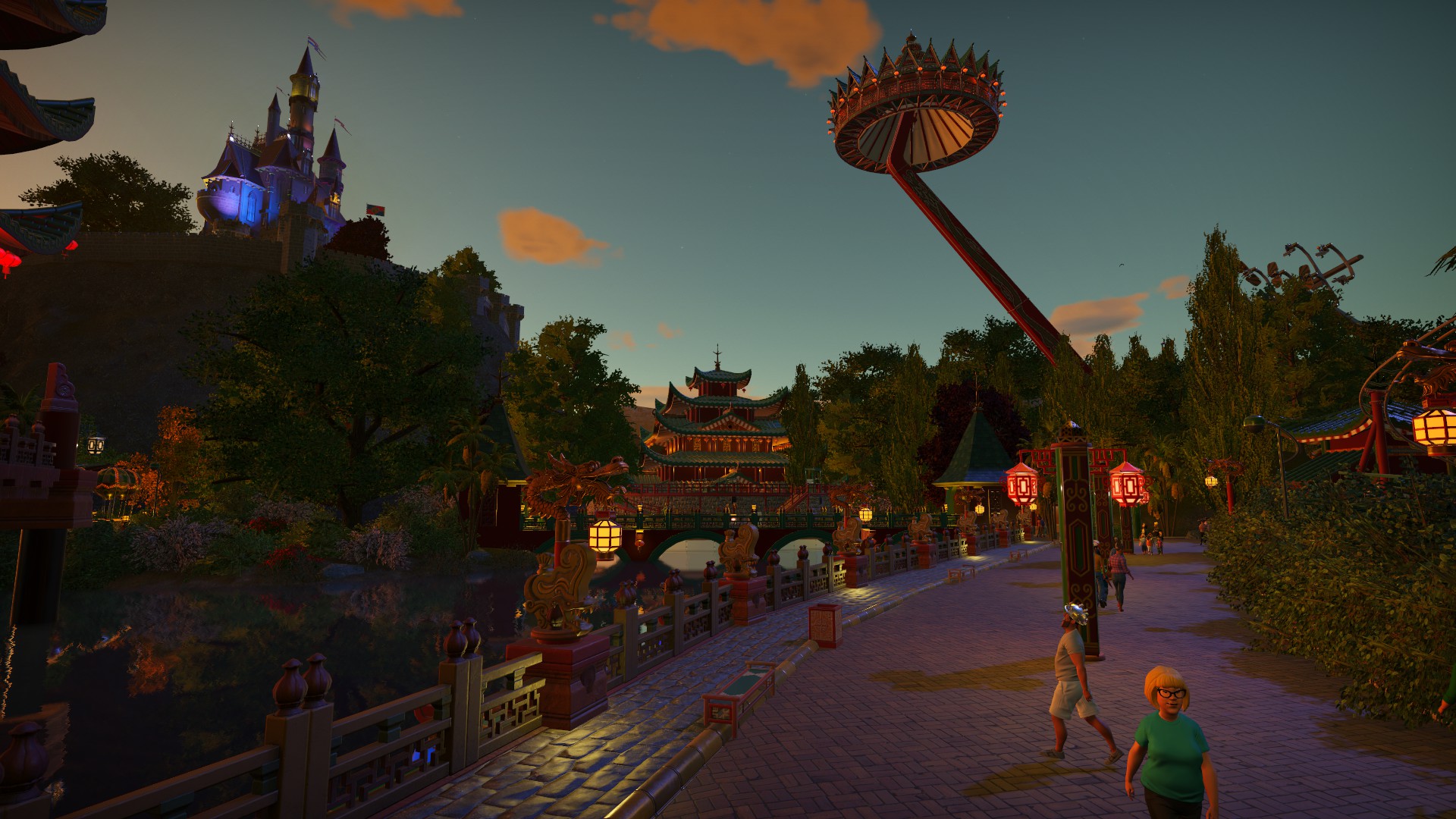 While 'Vahylde: Attack On Hel' is a really great Viking themed dive coaster, it's the station that I'm most proud of, with some nice details and awesome lighting effects: 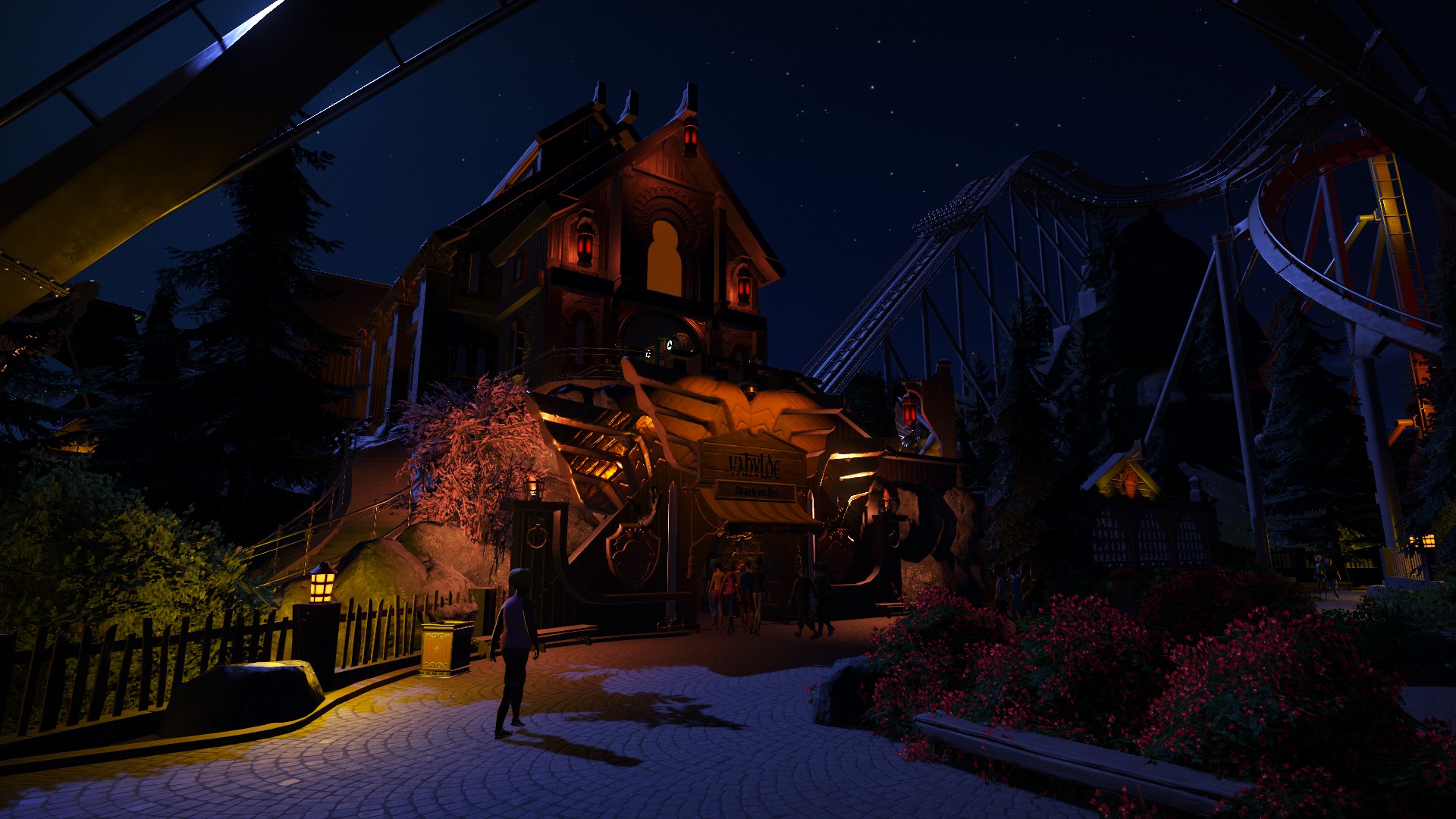 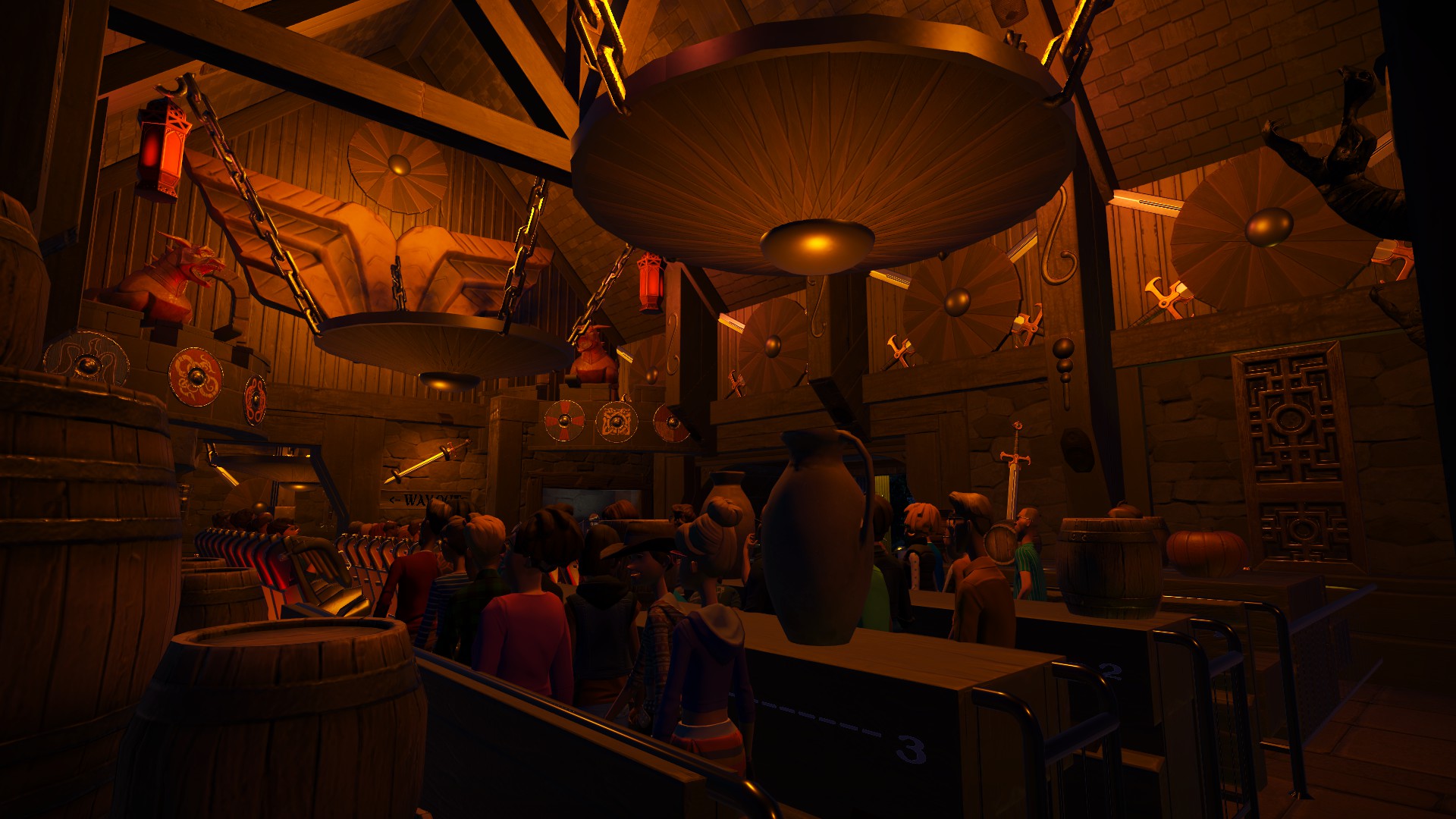 Pharaoh's Fury was another ambitious and off-the-ball idea and one of a few occasions where I had to push myself out of my comfort zone and try new things. This was inspired off Talocan at Phantasialand and features some great fire and water effects 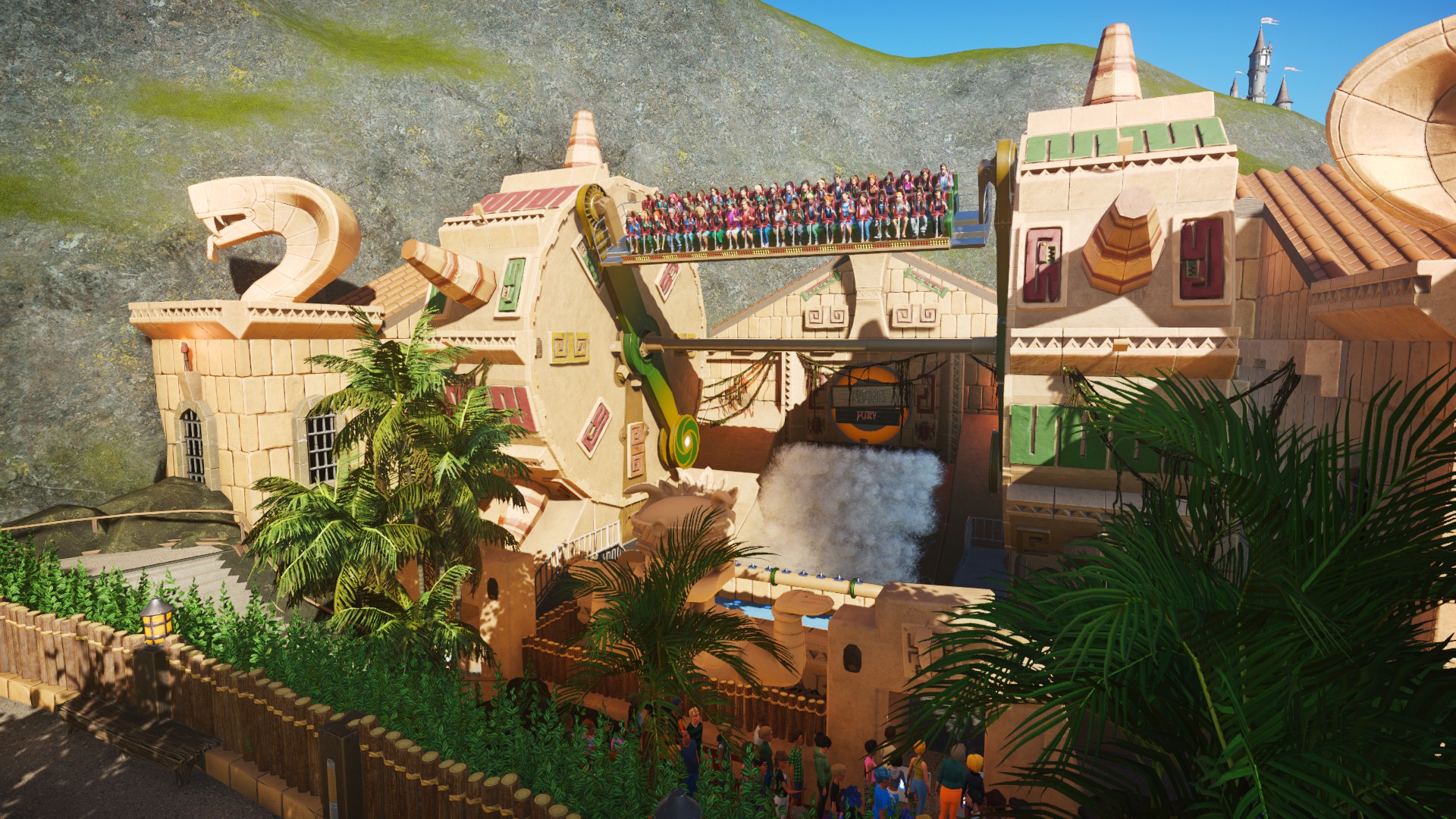 On the topic of 'off-the-ball' ideas, while still rather simplistic, the station for my spinning coaster, Whirlwind, was a brilliant concept, utilising billboards and carefully placed lighting to create a really immersive forest setting.

Finally, of course, we have Talon! Obviously inspired off Taron at Phantasialand, this is still my most complex project to date, as building a compact coaster that interacts with terrain and buildings alike was not easy. And at the heart of this beast...the legendary Steampunk Dragon. 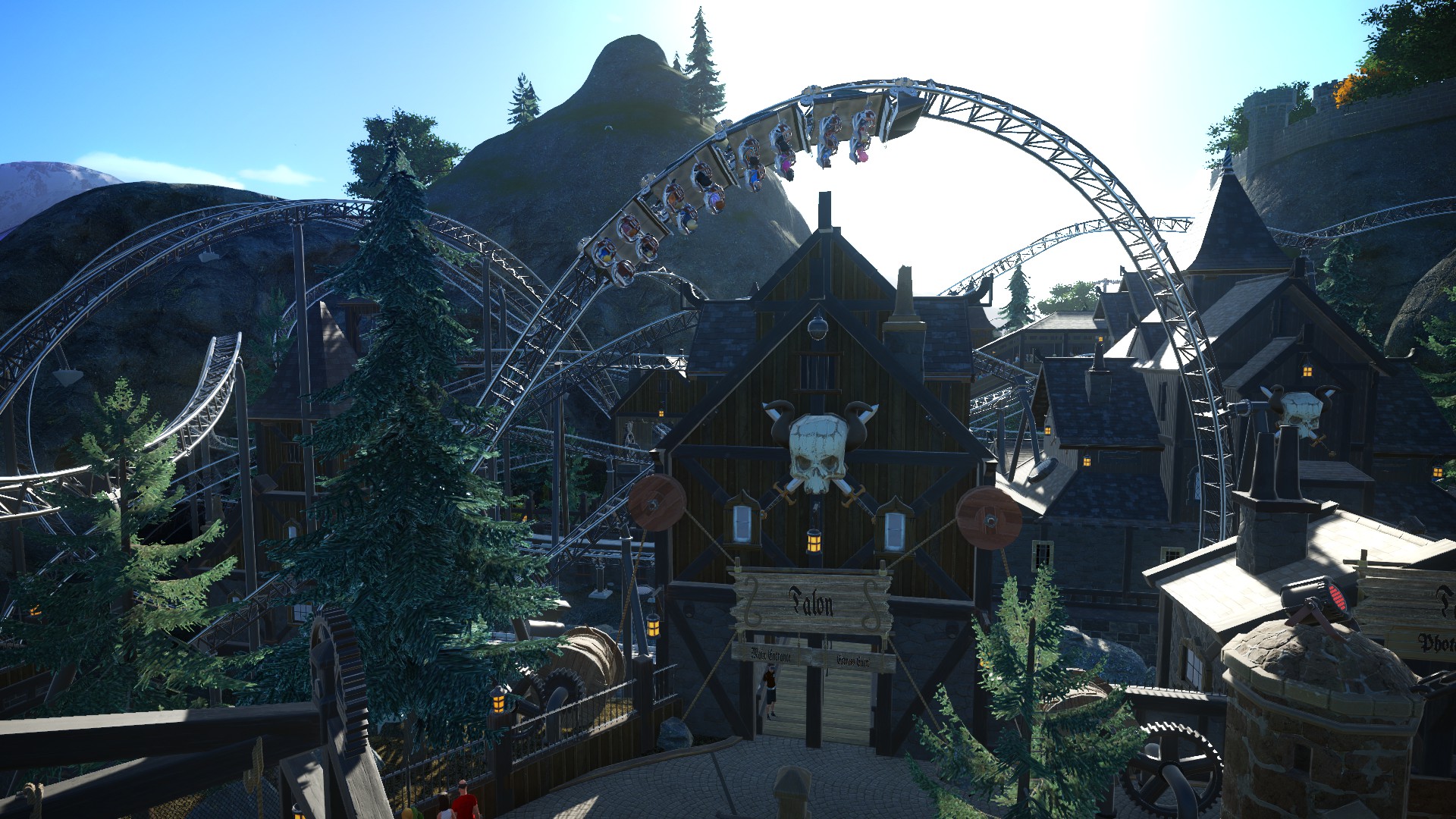 But if I were to select my overall favourite Planet Coaster memory, it's not actually within the game itself...but the community it spawned. Warning, it gets a little deep...

While my first year or so of playing Planet Coaster was enough to keep my mental health in check, it unfortunately wouldn't quite be enough once the narcissistic abuse I went through elsewhere had set in. However, all that would change in 2019; I attended the annual Efteling meetup not quite knowing what to expect...and before I knew it I was getting an overwhelming level of acceptance, love and appreciation. I never thought a gaming community would see the end of the worst of my mental health issues and I couldn't be more proud to label the PlanFam as the community that changed my life. 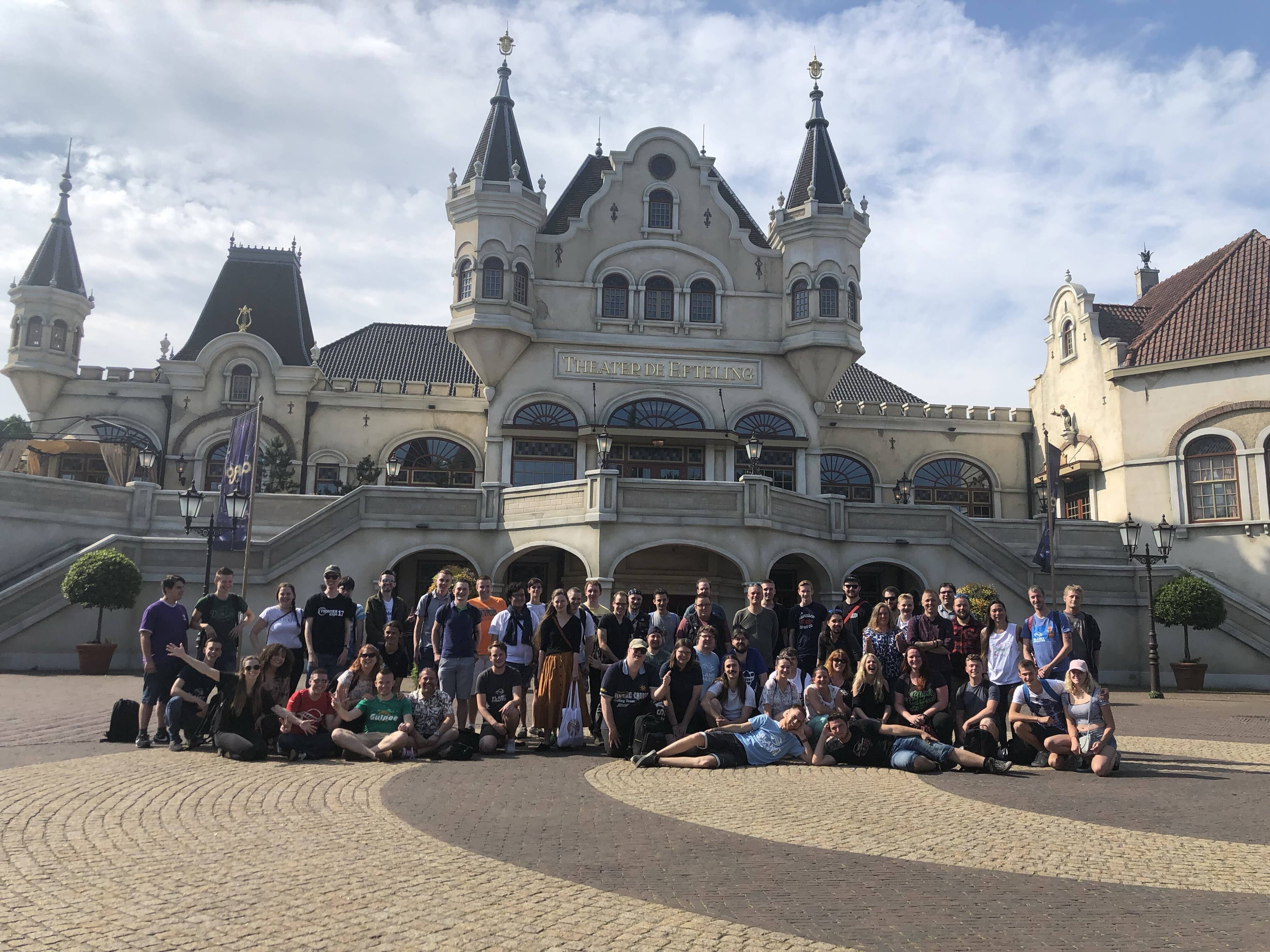 Thank you Frontier for keeping such a wonderful game alive and keeping this coaster nerd on his toes. Here's to another 5 years, and many more!

Happy anniversary Planco!
P.S. I still am wishing for a Planet Coaster 2.

5 years already ?? I have the chance to play it only since one year because I play it on console ! Happy anniversary

It's hard to choose my fav builds, so I will put just a few : 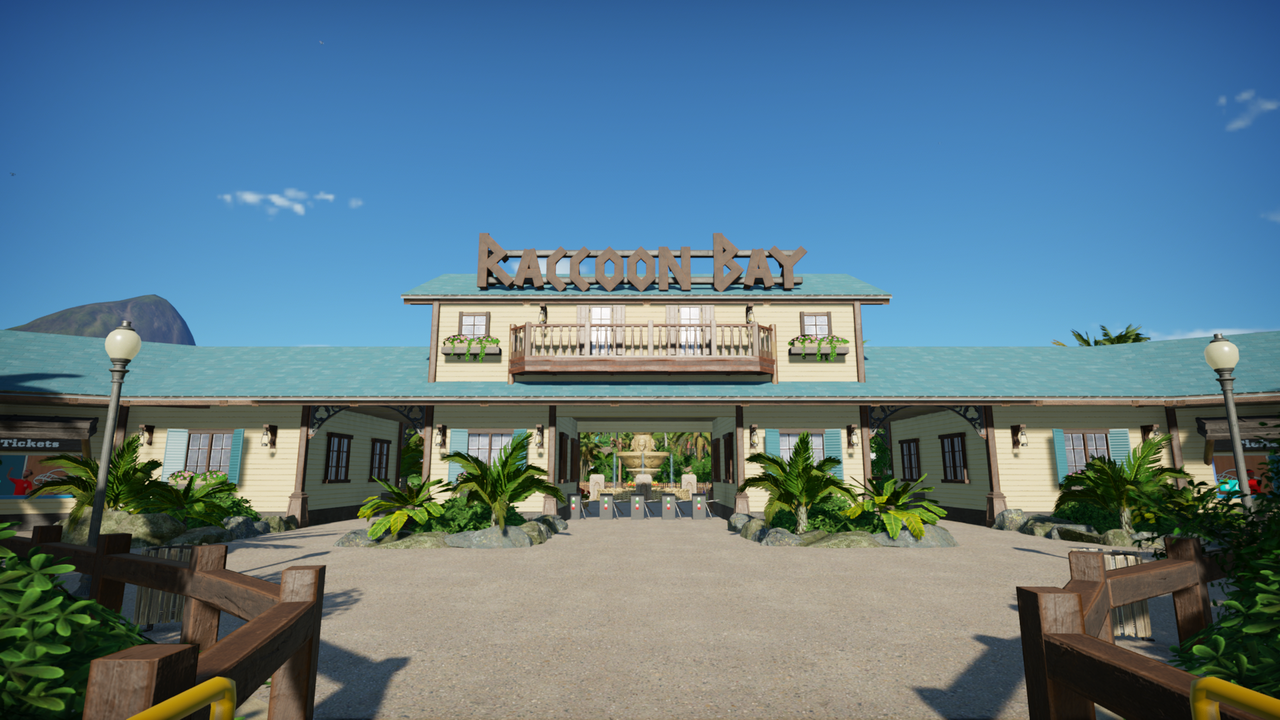 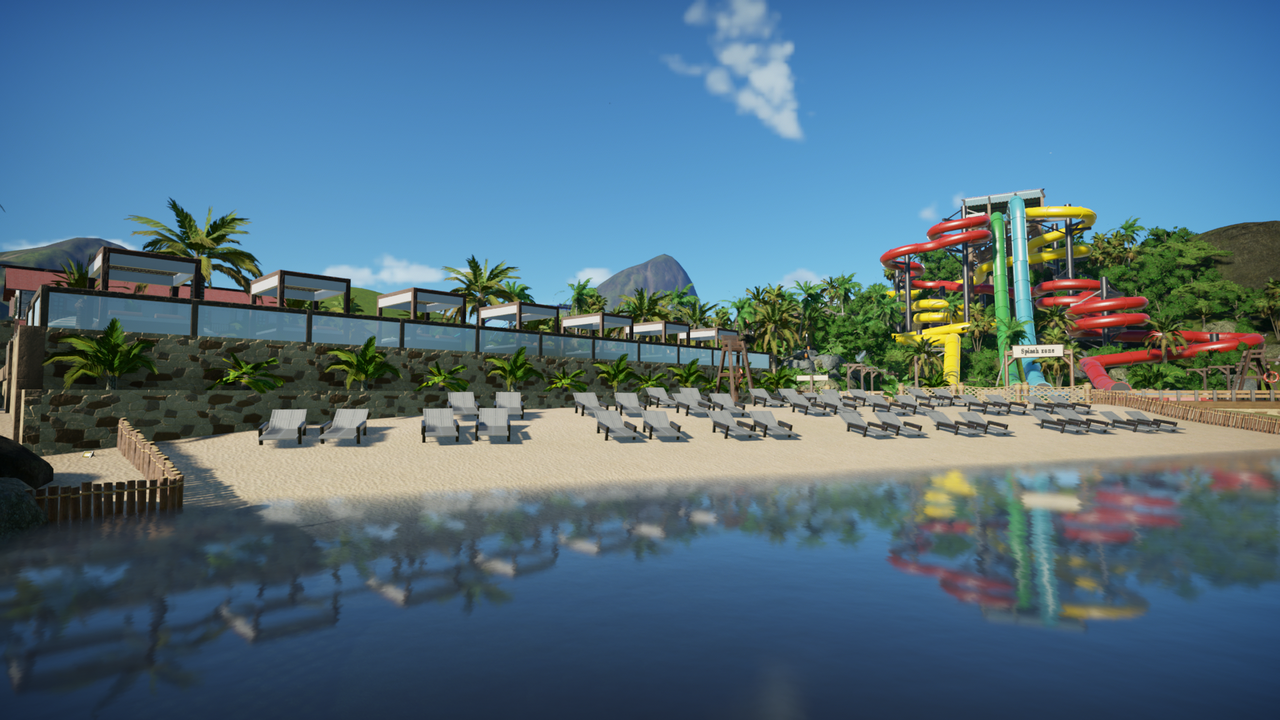 Can't wait to have my PC to play it there. (Also can't wait for Planet Coaster 2