How to Determine Illegal Passengers

Okay, so back when I last played Elite I seem to recall picking up illegal passengers came with a warning indicating they might be wanted in other systems, but didn't see that with the one I picked up today. I escaped and dumped her happy on some backwater station, but what the heck - how do you tell anymore? Is it the "Threat Level" number? If so, anyone beyond what number would be considered illegal?

Or maybe I just missed something - see the below screenshots: 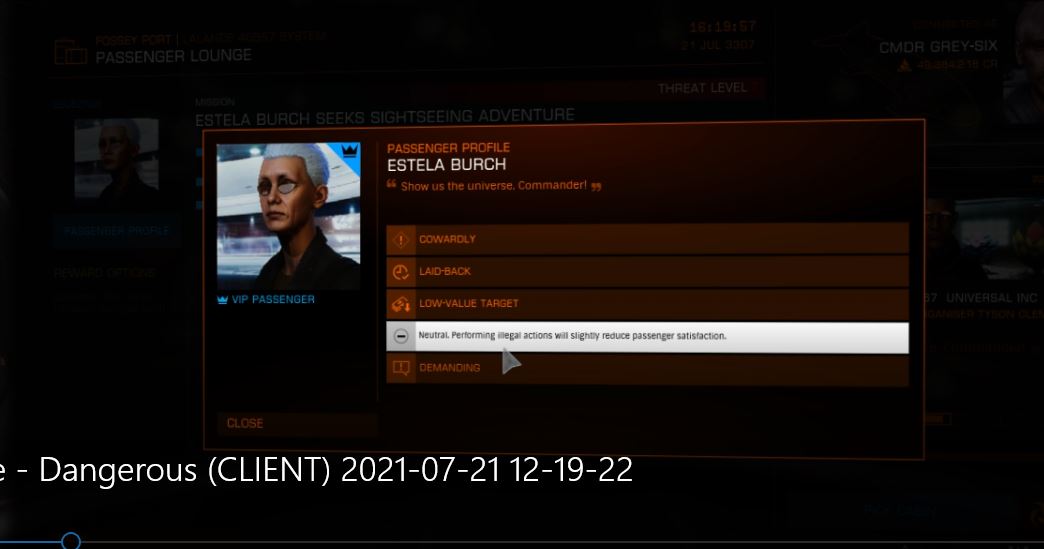 I noticed the "ILLEGAL PASSENGER" on the lower-right of the HUD only after accepting the mission (and getting lit up like a Christmas tree). So of course abandoning it after the fact would have penalized me anyway.

S
Not defending this, at minimum it should show in the passenger profile, but ideally it should be mentioned directly on the main mission page and highlighted in red...

but in the meantime Threat Level is probably our best indicator. And a high threat level with "Low Value Target" probably Means Something.

Found this in another forum - apparently you have to dig into the Help menu lower-right:

Any ideas on how to identify illegal passengers? I get that Criminal passengers are illegal, but I just took a Celebrity fare, just to discover, as I was leaving the station that the passenger was an illegal passenger. I checked and doubled checked, and checked a third time, but yeah, it was a...

Why they changed the SOP for Odyssey, I've no idea.

It is on the main mission page, but a bit buried in the "passenger traits".

I have mixed feelings about this. I think good game design would highlight it, maybe in red. On the other hand if we were really picking up passengers at a spaceport, I expect they would cough and mumble fast when asked about any previous convictions, so it's realistic to have to look into their backgrounds carefully.

<Edit> Actually it is in red with a warning triangle, just above "plan your journey on the galaxy map".

Have never used the "plan your journey" piece prior to picking up a passenger - good tip; I'll remember to do that next time.

Still, once I lifted there's the darned "ILLEGAL PASSENGER" on my lower right. Immediately landed, kicked off the twit, and took the hit.

GreySix said:
Found this in another forum - apparently you have to dig into the Help menu lower-right:

Any ideas on how to identify illegal passengers? I get that Criminal passengers are illegal, but I just took a Celebrity fare, just to discover, as I was leaving the station that the passenger was an illegal passenger. I checked and doubled checked, and checked a third time, but yeah, it was a...

Why they changed the SOP for Odyssey, I've no idea.
Click to expand...

So many "little" things that were good/great in Horizons are either missing or broken in Ody because they (FDev), apparently, forked the code for Ody at some rev prior to those things having been added and/or fixed in Horizons.

I used the word "little" not to make light of the OP or his post, or anything else really. I used that word because, as all most many some of us, and most theologians for that matter, know that "The devil is in the details". Maybe it was a poor attempt at exorcism? (Ba dum bum, tssss)

Thank you; It's great to be here; thank you very much; I'll be in the forums all week.

But seriously, thanks for the tip @GreySix. It'll be useful whenever I figure out where I misplaced my Type-7 Deluxe Passenger Freighter: IST-CONESTOGA

I just assume they all are criminals or want their privacy, so that's how I'm flying. If you aim for the slot in supercruise, the system authority has no time to scan you before you get through and you have an easy time hitting the slot even going at speed. Helps when you're using a Mamba as VIP yacht.

If there's one thing then it's that you'll get screwed over by ED in anything you try.

There used to be a bug, a couple of years ago now at least, where the mission briefing would sometimes not show the passenger as wanted at all. I got caught out a couple of times picking up a wanted passenger by mistake, assumed it was my fault and I just missed the text (it wasn't highlighted in a different colour back then) so started checking every mission offer closely. Doing so, I was able to confirm that, sometimes, the briefing would show the passenger as perfectly clean, no mention of being wanted. However, the moment they came on board, I'd get the "Illegal Passenger" message in the lower-right of the screen in the cockpit view.

In the end I was like "sod it" and got very good at avoiding scans...

This bug was seemingly fixed back then, as well as changes made to make it perfectly obvious that the passenger was a criminal. I wonder if this bug is back? I've noticed a few returning favourites since the Odyssey update - not just in Odyssey either, but with base Horizons too.