Orvidius said:
Ah, I didn't realize the binary was the main body here. That's what I get for skimming along! It shouldn't change anything at all, since as you said, the barycenter is really what matters once you get a good distance away.
Click to expand...

I'm pretty sure that ED gets the 'double planet' thing wrong a lot of the time anyway - I really doubt that a brown dwarf and a large icy planet would be orbiting a barycentre outside the brown dwarf (the BD is 10-70 times more massive than Jupiter, and the icy body is only a few times the mass of the Earth at most). Really the icy body in the pair is just another moon of the BD.

This is kind of brilliant... ill be keeping my eyes open for them now i know they are out there...

On Shephard moons, they do exist, but not really correctly. In game there should be ultra pourus moons with low density. Currently the basic planet types fit to very clear distributions of density nothing less dense than icy (other than gas giants)

E
And another one. 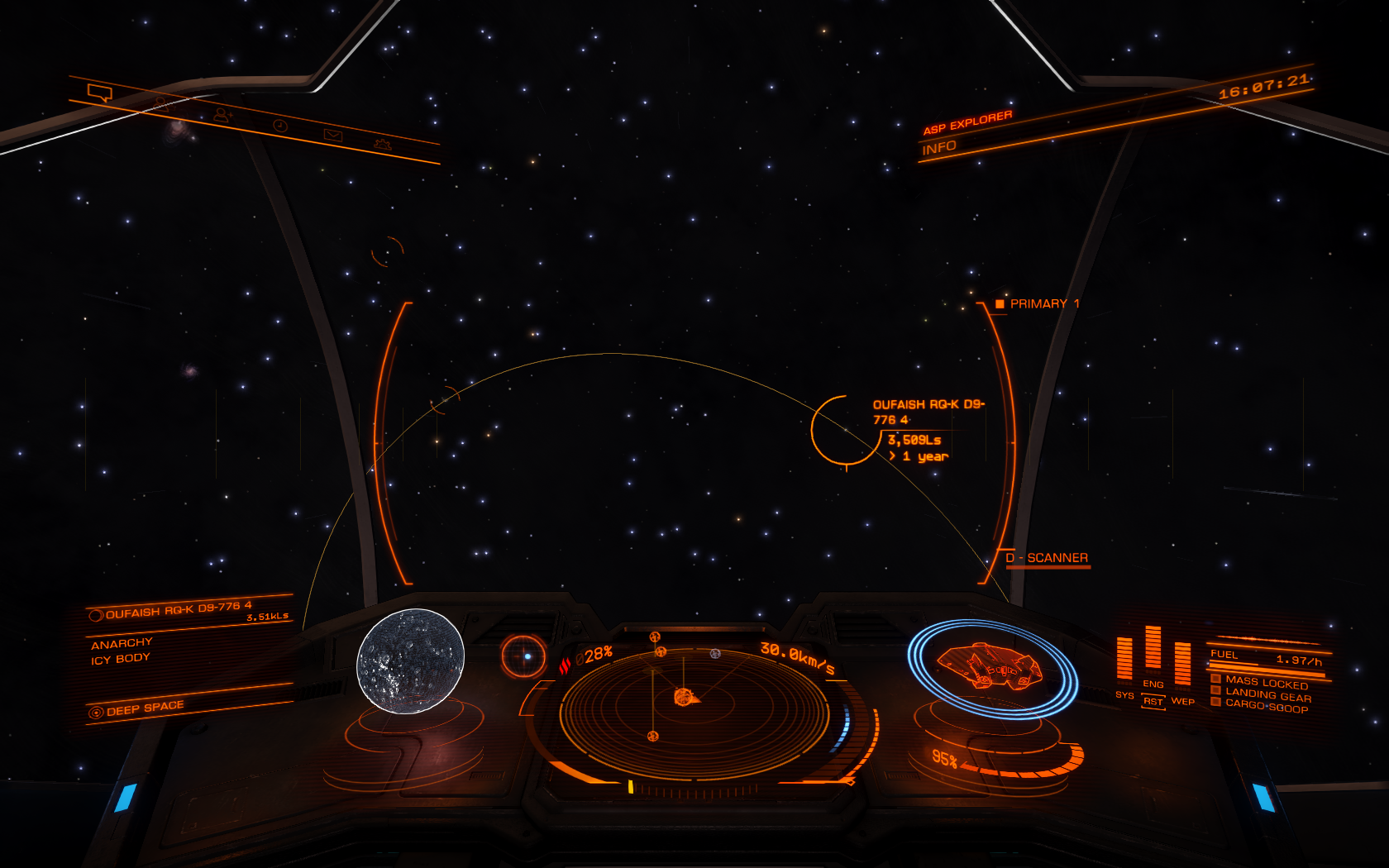 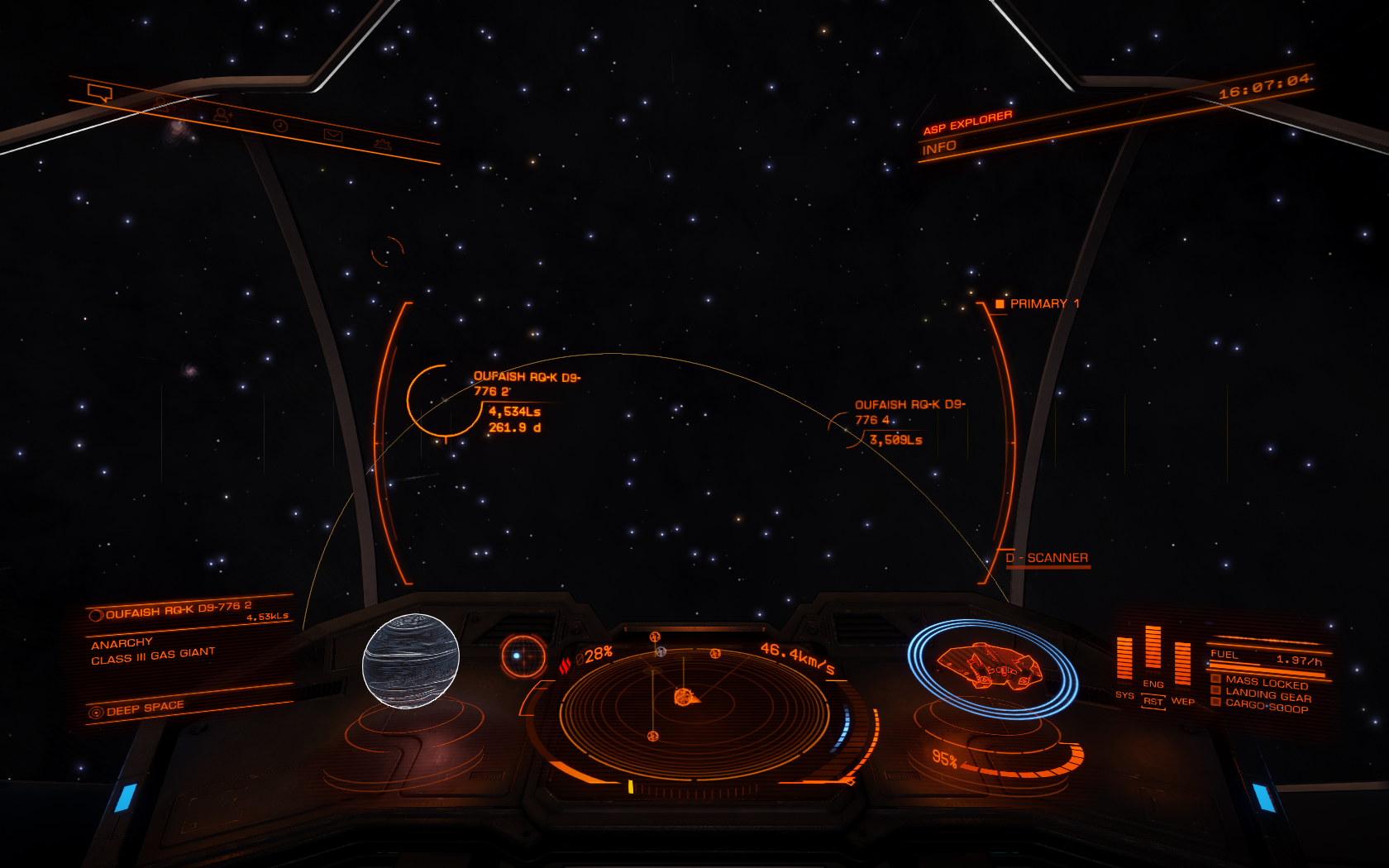 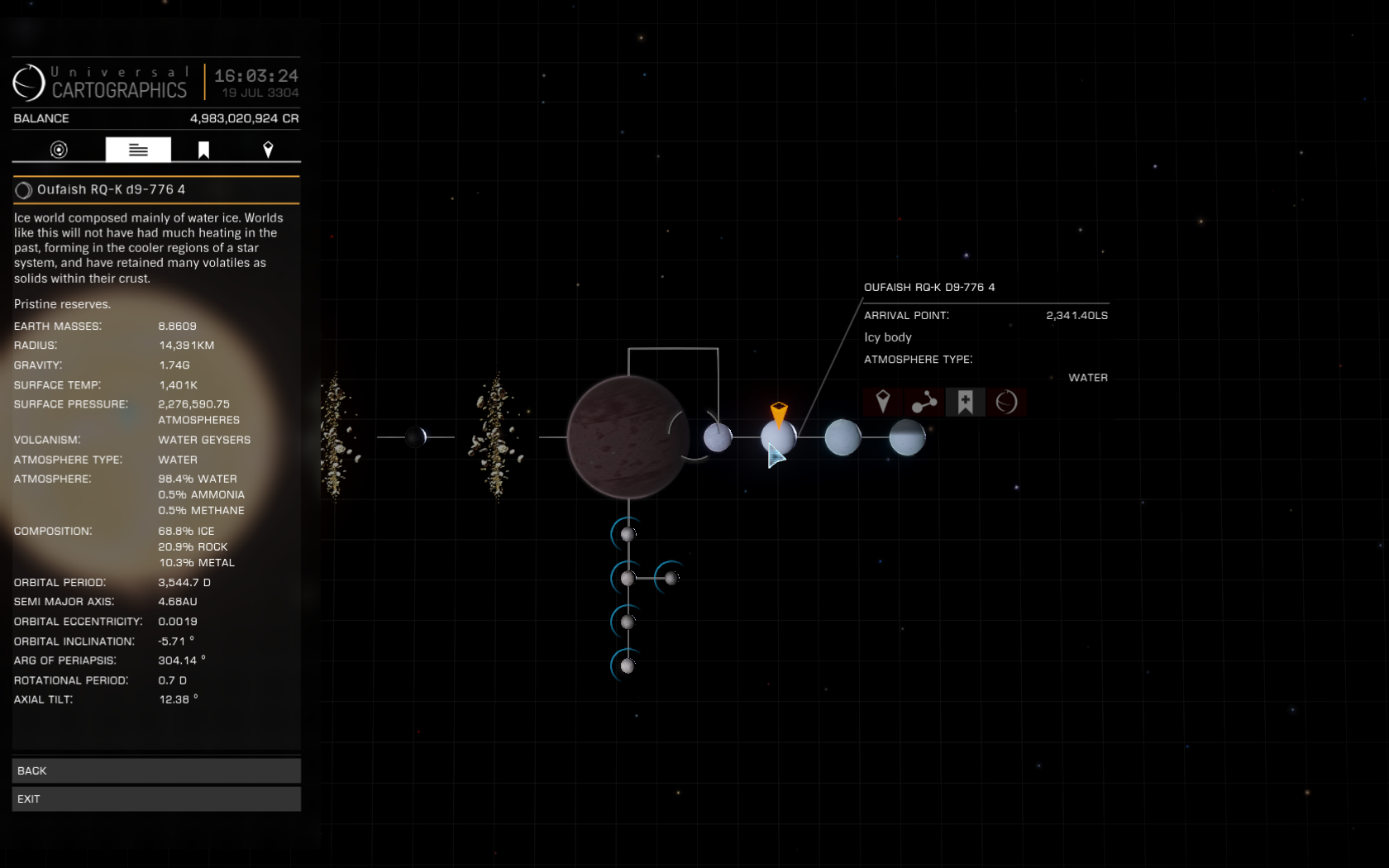 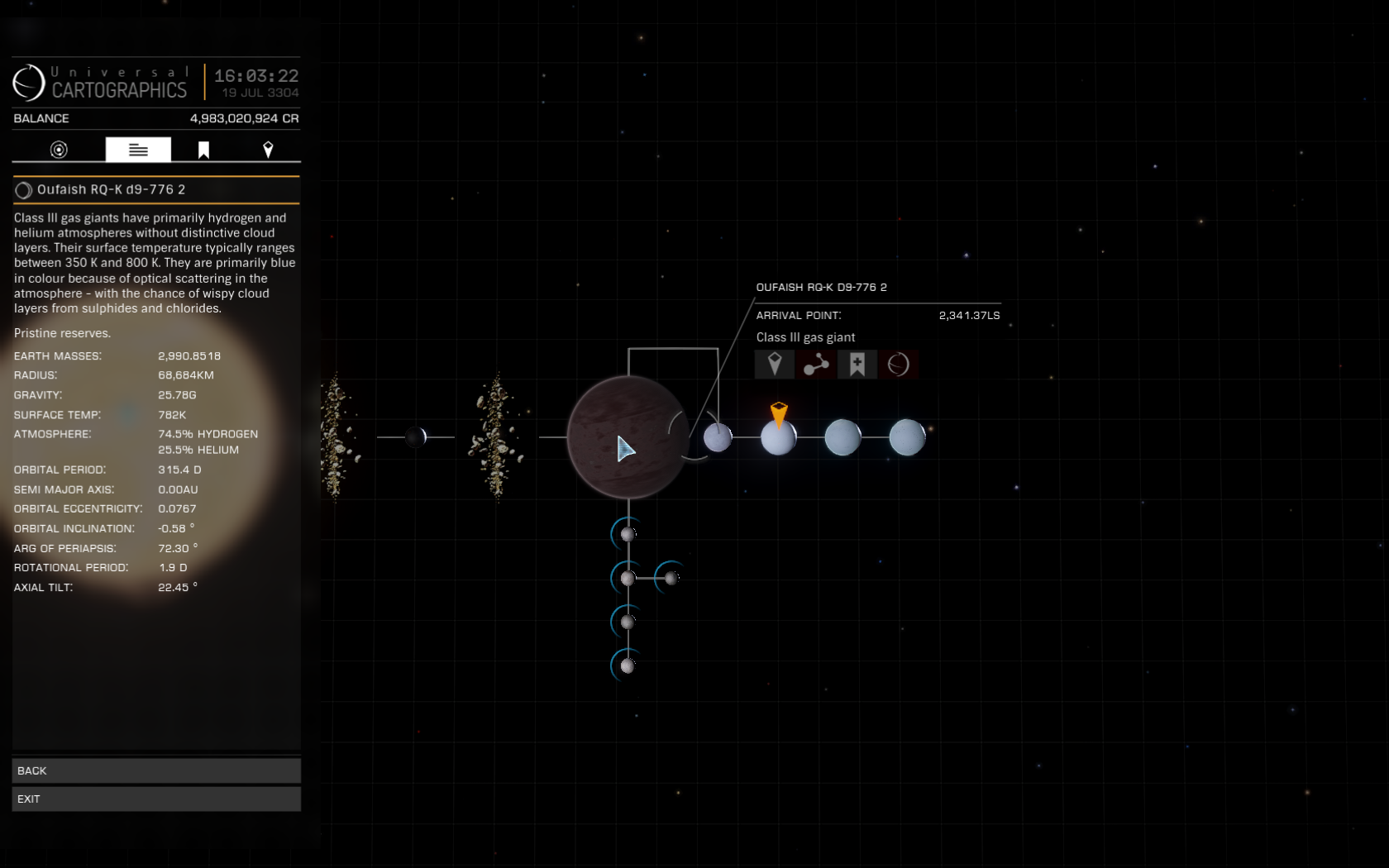 I've found another, a really nice one which is actually quite close to the "holy grail" of trojans: finding an ELW in a trojan orbit. My world is actually a waterworld, which is actually not terraformable despite being smack in the middle of the Goldilocks Zone for its star. I can't figure out why it's not a CFT, unless trojanity is somehow a disqualifier for habitability or it's an extension of the "hot moons bug". We need more data: more Goldilocks Zone and CFT trojans!

Details of the planet and evidence of trojanity to be delivered the next time I reach spacedock, hopefully within a week.

Well, I'm a couple of weeks behind schedule, but I've finally docked and sold my Trojan data. Here 'tis.

First, the location: the Qiedeau LJ-O d7-27 system. About 5500 LY away from Sol, or 4/5ths of the way out to the Crab Nebula if flying a more or less straight line. Here's the system maps of the two planets in question: the gas giant anchor-planet 6 and waterworld Trojan planet 7. 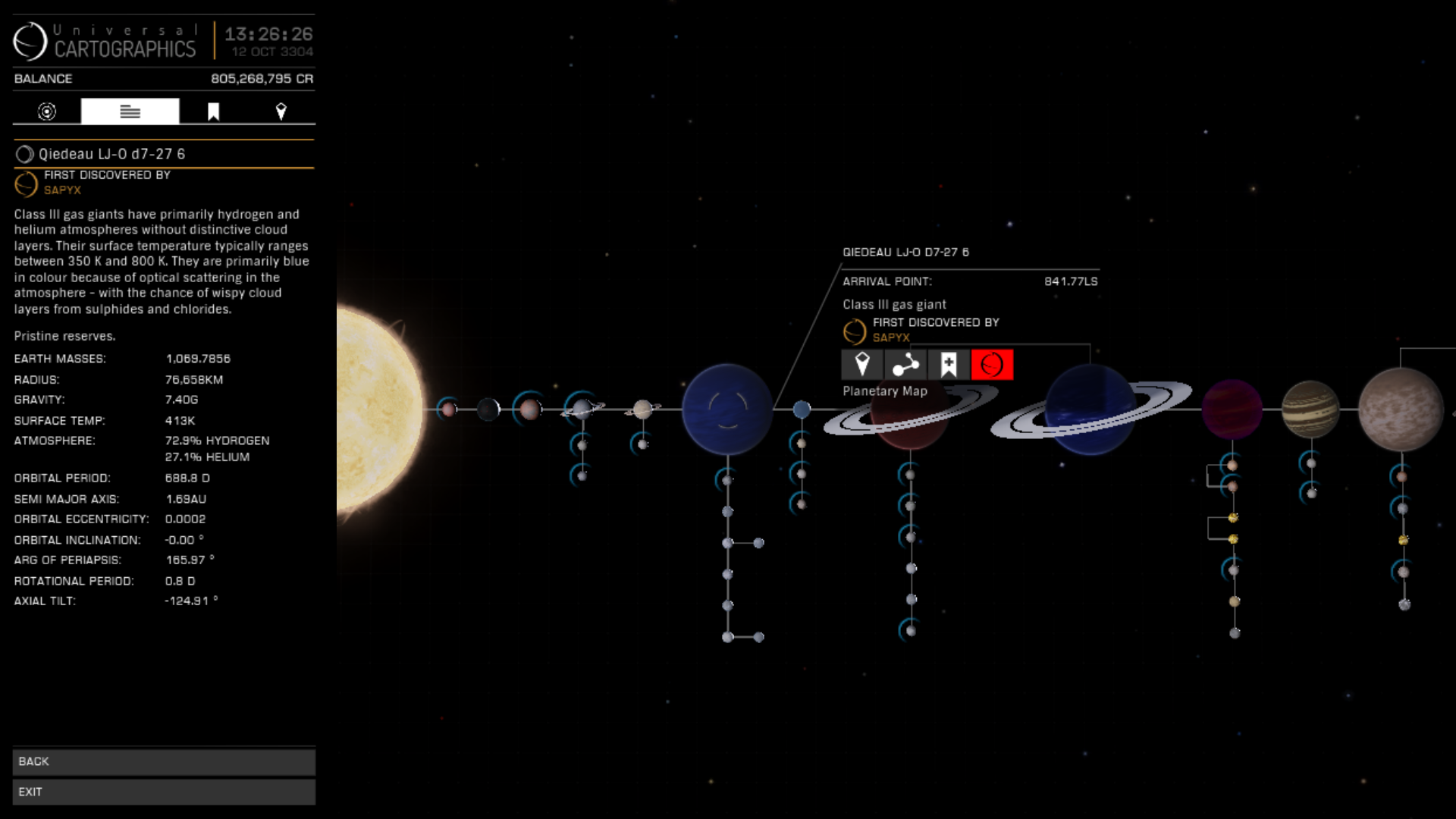 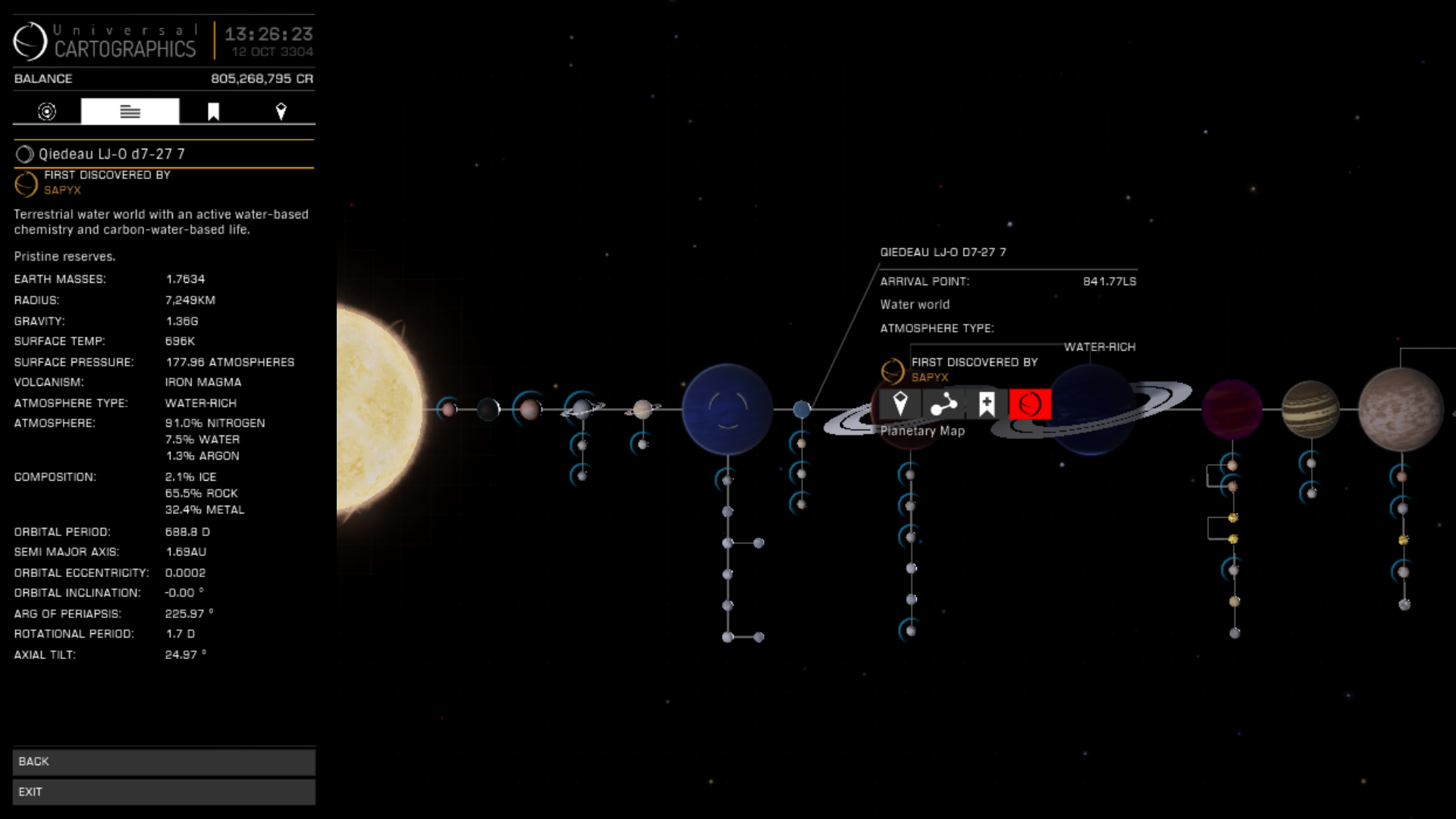 Now for the evidence of trojanity. The next pic is while hovering a few thousand kms away from the waterworld Planet 7; you will notice that the system's star and the gas giant Planet 6 are both 842 Ls away. The final pic is the photographic evidence of the above: Planets 6 and 7 are sitting on the same orbit, with the star, Planet 6 and Planet 7 all forming an equilateral triangle. 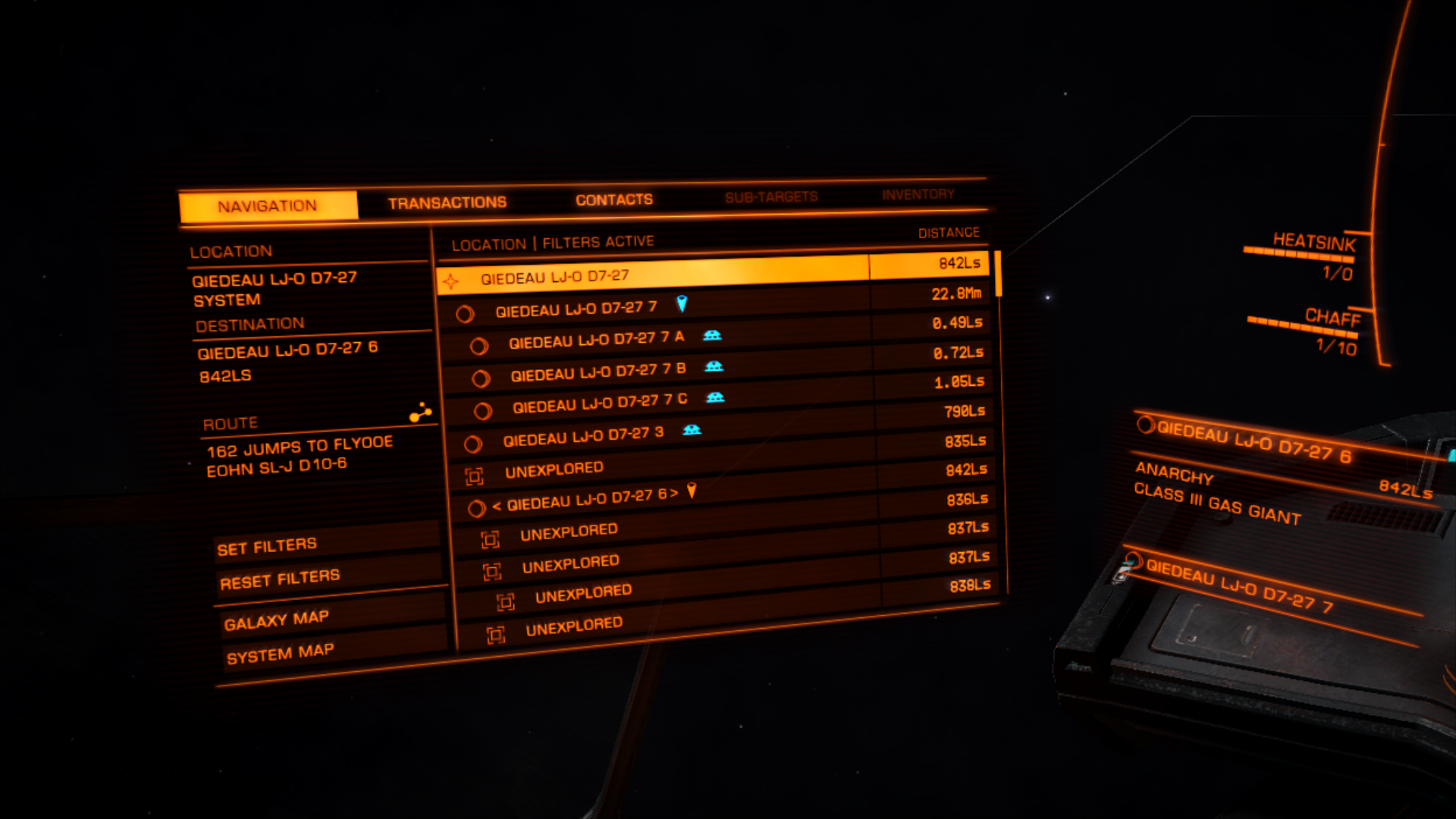 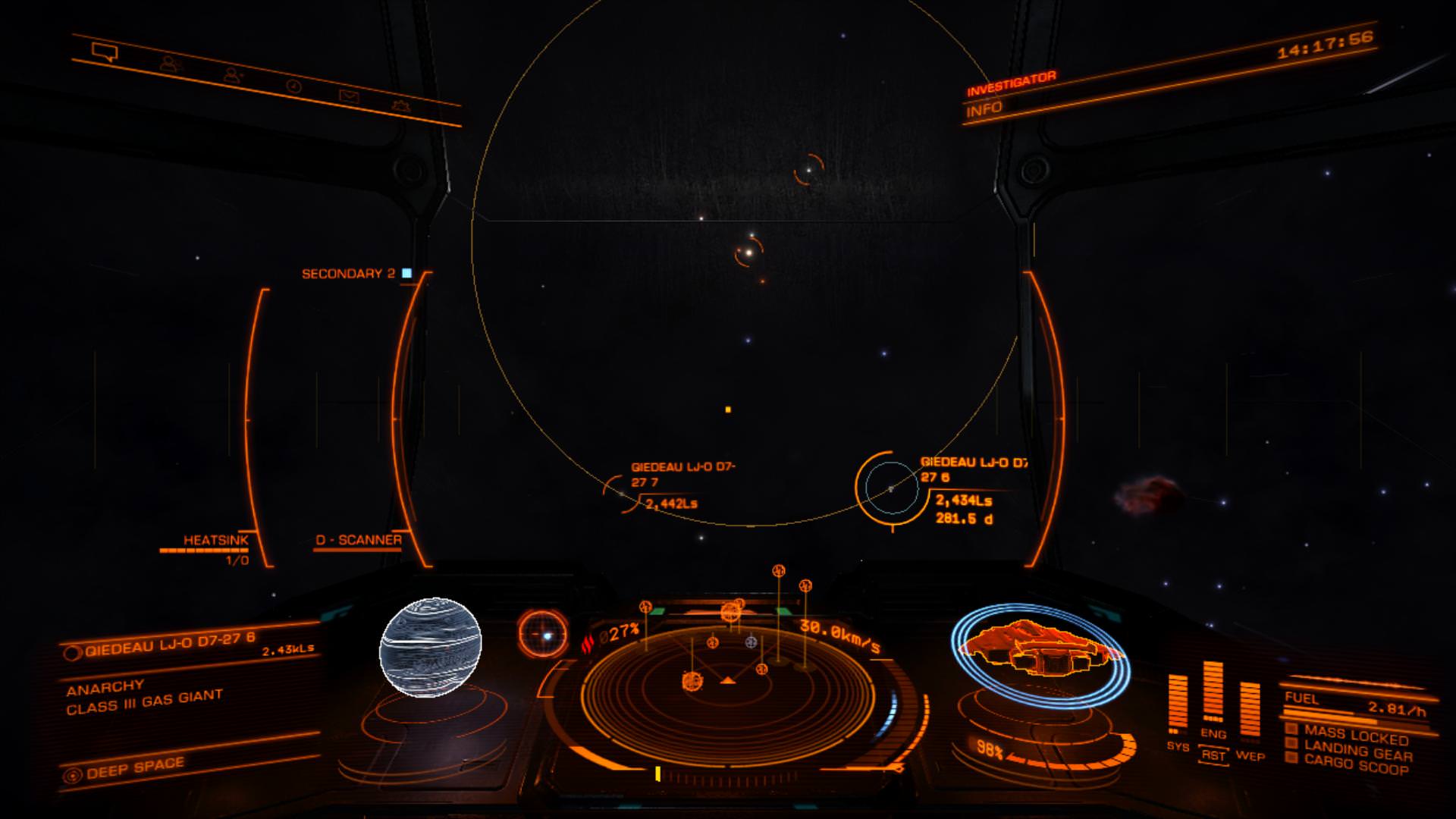 Nice, they even look like they're about 60 degrees apart in the orbit, putting the smaller one at either the L4 or L5 Lagrange point, depending on which direction they're travelling. 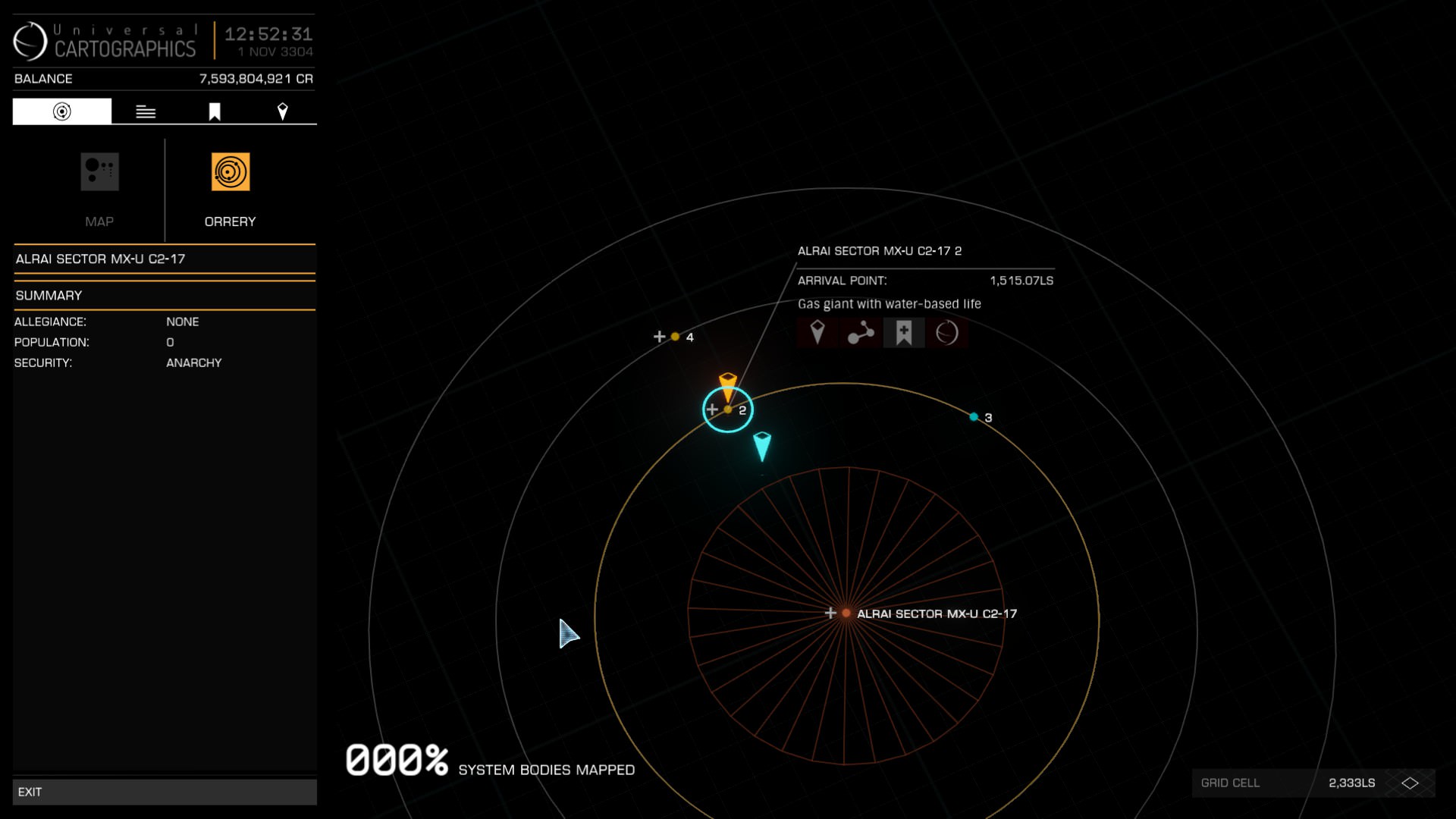 Found another one. It's in a well-explored system, not far from the bubble, and it's similar to several others above, in that the "precise" matching doesn't happen, because the "anchor" planet is a binary planet, so the actual anchor point for the Trojan is the binary's barycentre. 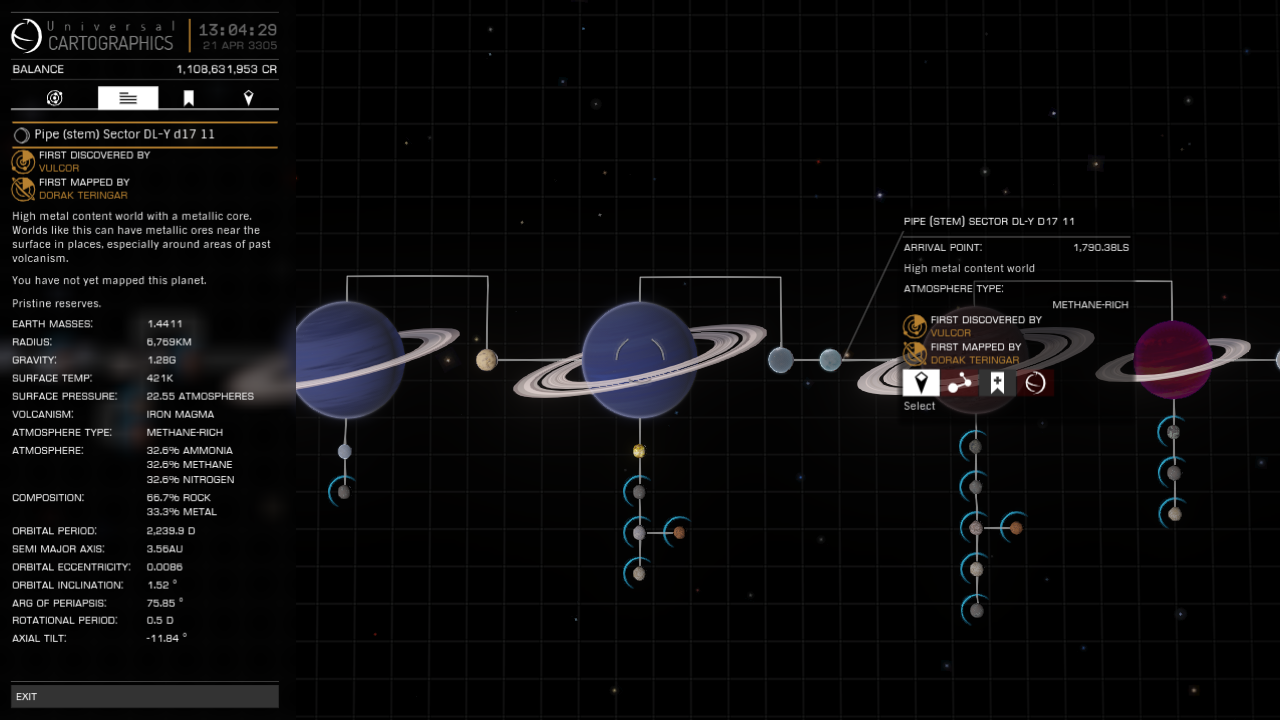 Planet 11 is in a Trojan point of the Planet 9/10 barycentre. 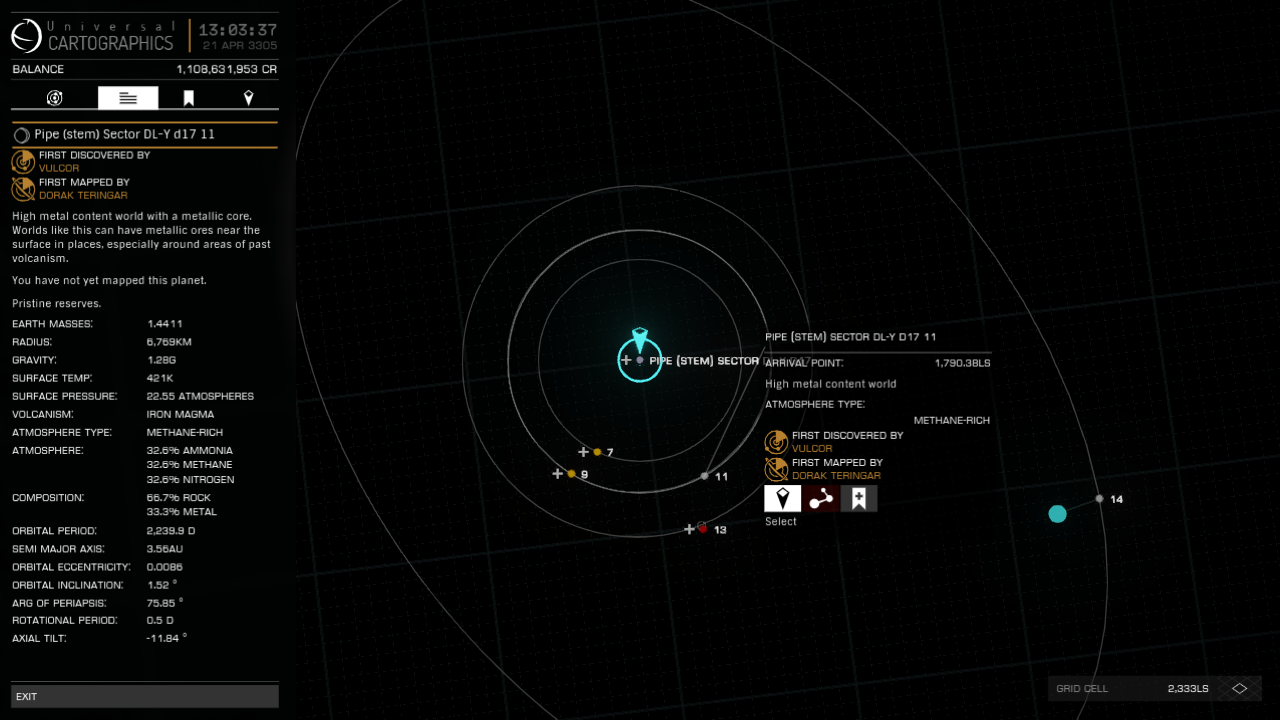 As you can see, the star, Planet 9 and Planet 11 form the classic Lagrangian equilateral triangle. Planet 10 is too close to Planet 9 at that zoom level so is invisible. 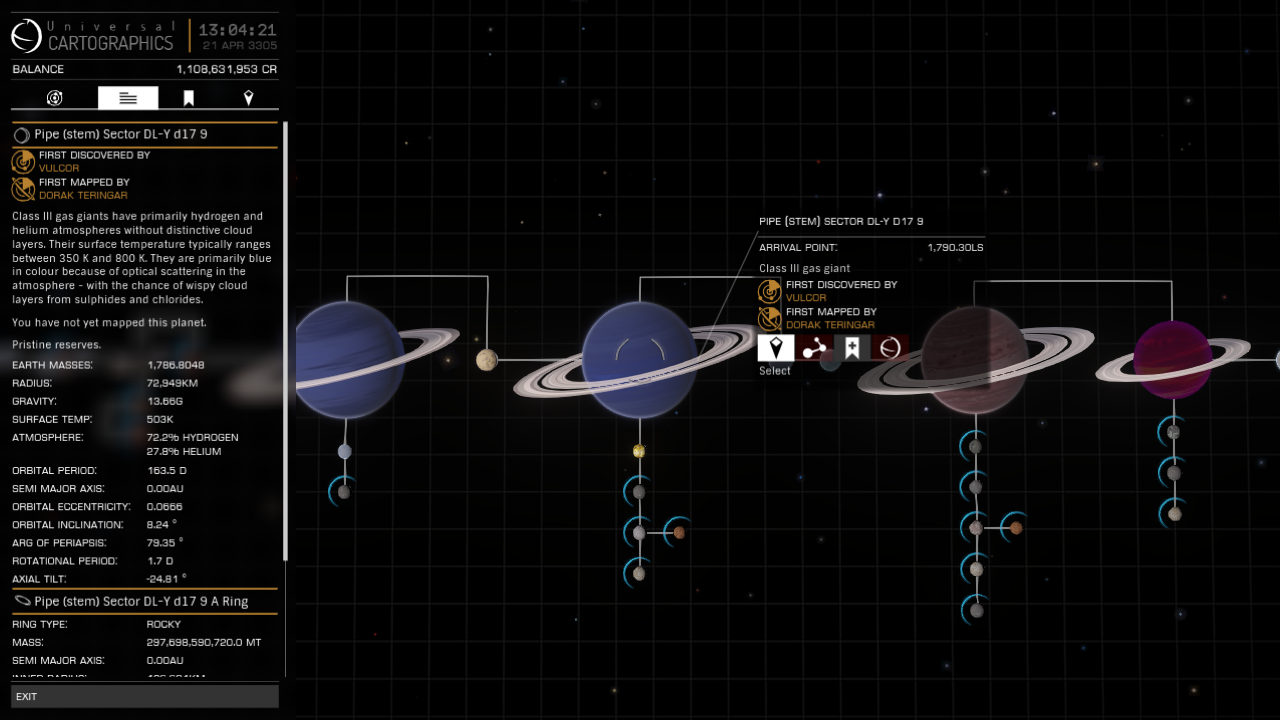 The stats for Planet 9.

S
First question:
Am I understanding it correctly, that in a (regular) trojan system, the following three characteristics need to be the same for the two bodies:

I think so, because if this would NOT be the case, the two bodies would NOT share the the same orbit.

Second question:
Do I assume correctly that in the EDSM data no information about the mean anomaly or the longitude of the ascending node can be found?

For the third question I assume that these latter two orbital paramaters are the same for trojans, if the first three parameters already have equal values.

Fourth (and most important) question:
is somebody close to GCRV 2311? I'm at the other end of the galaxy.
If yes, would that somebody please go there and make a picture of the system map and the Orrery and post it here?
For bodies 5 and 6 the above is true and body 6 would be at L3 of body 5.

I am curious about all of this, because I'm working on a program to identify trojans in the EDSM data

I think you're correct, that those parameters are missing from the orbital data. I think it would actually be the mean anomaly that would be different for the two bodies, rather than the argument of periapsis. The mean anomaly is how far through the orbit the body currently is, whereas the argument of periapsis determines the position of the periapsis relative to the ascending node. Since the orbits should be very close to identical, or completely identical, the mean anomaly should be off by 60 degrees, and they should have the same periapsis.

But having said that, I'm not an expert... just an armchair enthusiast.

What I don't know is whether ED generates the orbits with completely identical values, or just "close enough". I would think they'd be identical, though.

In reality, the orbits would probably slightly different when measured at any given moment, as they would probably oscillate a bit, especially if there's any eccentricity. It should be a self balancing system, as long as the mass ratios are sufficient and the orbits are nearly identical.

From what I've read, the mass ratios between the bodies need to be at least 25:1 for minimal stability, but over 100:1 for stability over millions or billions of years.

And of course, the eccentricity should be very close to zero.

S
Thank you Orvidius for the answers.

I have more questions.
Sapyx mentioned the Pipe (stem) Sector DL-Y d17 system and I have looked at the bodies involved.

Or am I misunderstanding something (again)? is it possible, that for binary systems (planets 9 + 10) the orbital period actually is the time these two need to orbit each other and NOT the time they need to orbit around the star?

schlowi123 said:
Or am I misunderstanding something (again)? is it possible, that for binary systems (planets 9 + 10) the orbital period actually is the time these two need to orbit each other and NOT the time they need to orbit around the star?
Click to expand...

Yes. Binary planets have the time to orbit each other.

There's no easy way to find the time their barycentre takes to orbit the star.

S
Looking at this system makes me believe, that ALL the orbital parameters might be for the (local) binary system and are NOT related to the motion around the star. Can anybody confirm this or does anybody know more about this?

Since the values for these parameters are equal for both planets in a binary system I thought they belong to the barycenter, but maybe they don't.

If this is true, can I somehow get the data for the barycenter from the given parameters (or from anywhere else)?

Ian Doncaster said:
There's no easy way to find the time their barycentre takes to orbit the star.
Click to expand...

Yes, unfortunately, while barycentres "exist" as virtual objects in the Stellar Forge - I seem to recall someone extracting journal data and proving that barycentres are given an "object number" in a star system, just like planets, moons and as-yet-invisible-comets are given unique numbers - they are not selectable, and are not included in the actual journal files - their existence is inferred by a "gap" in the numbering where the barycentre ought to be. So while the game knows the orbital parameters of a barycentre, it never tells us, either directly in-game or in the journals.

Yeah, the fact that we only get orbital parameters for them orbiting their common barycenter, and not the barycenter's parameters, it's a nightmare trying to untangle this stuff in a meaningful way. Several of the spreadsheets on EDastro.com are plagued with problems due to this. For instance, Shepherd Moons... I need to find moons that orbit inside the radius of the rings, but the binary moons all have small orbital radii/periods. There's no reliable way to reconstruct star systems in their entirety because of all of the missing information. We would need FDev to add journal entries for the barycenters, and add the missing orbital parameters for all bodies too. But even if they did that, all of the data we have collected so far would still be incomplete.

S
Thank you for the answers. It helped a lot to understand the data a bit more.

I have one last hope, to identify at least the L4 / L5 trojans.
From (some very few) examples it seems to be as if the argument of periapsis is always 180 degrees for binary systems. This may be the reason why I found millions of trojans. So If I exclude this case, I may be able to find the others IF they are trojans to NON binary systems.
I will report back on this. 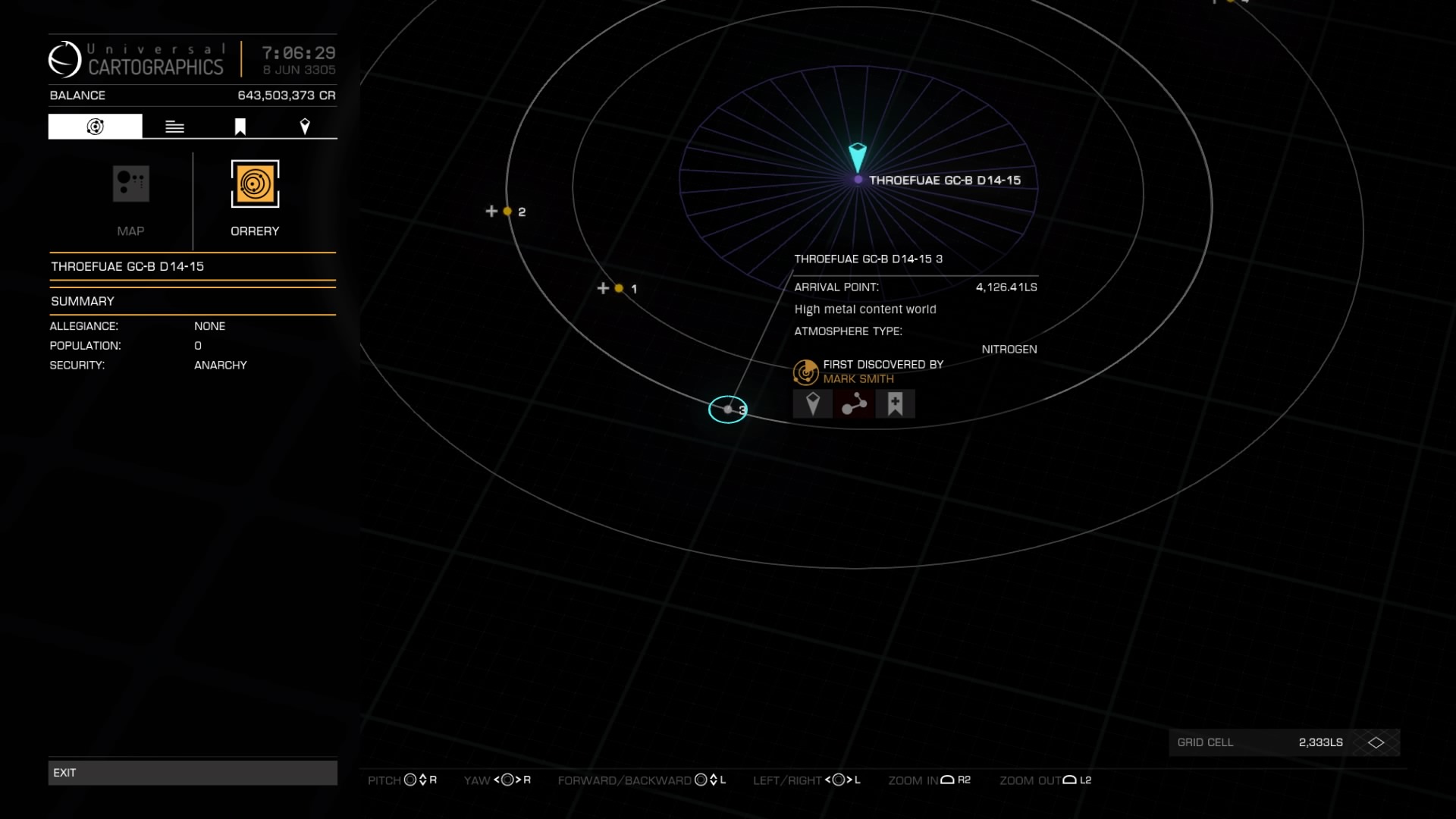 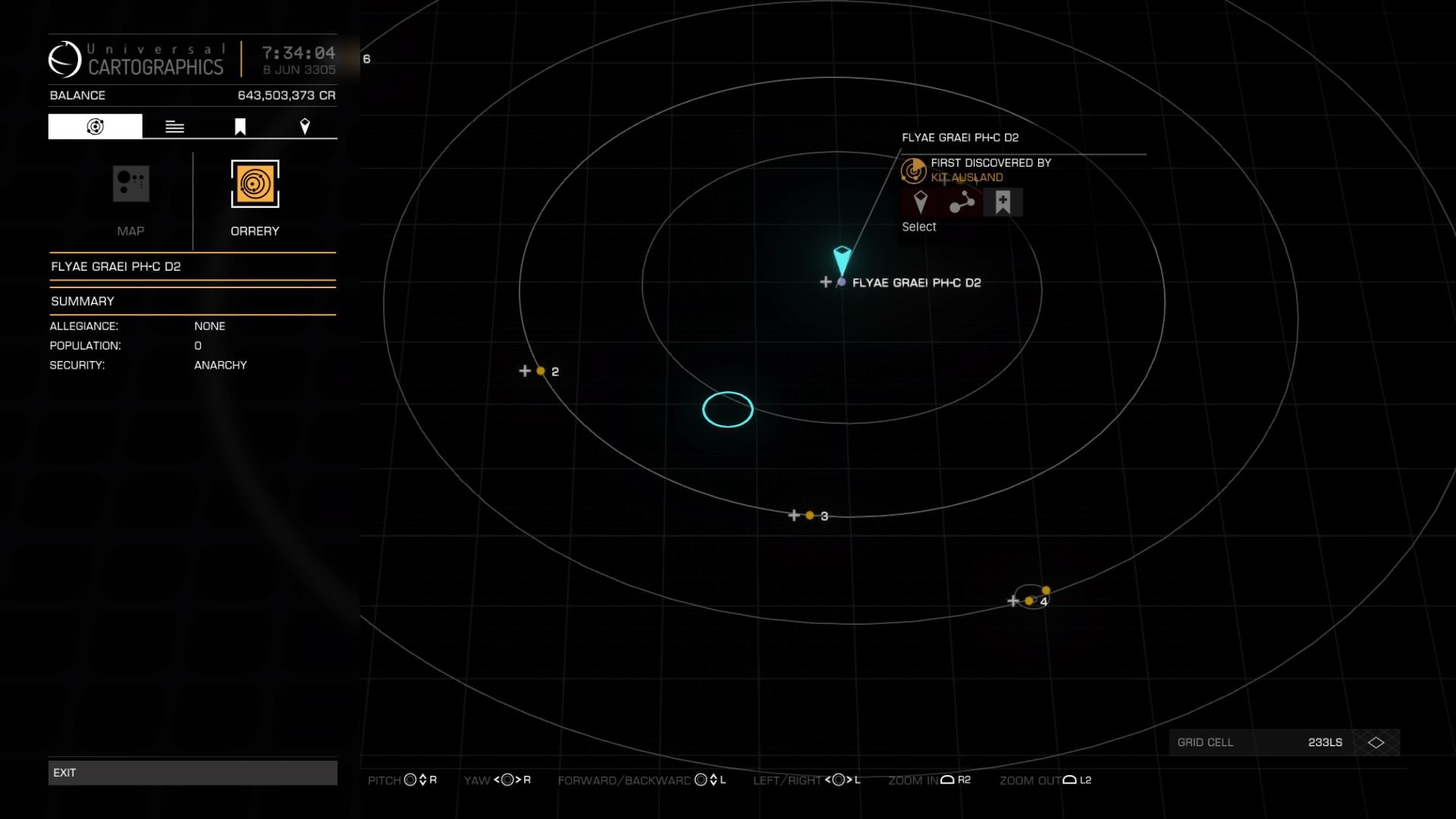 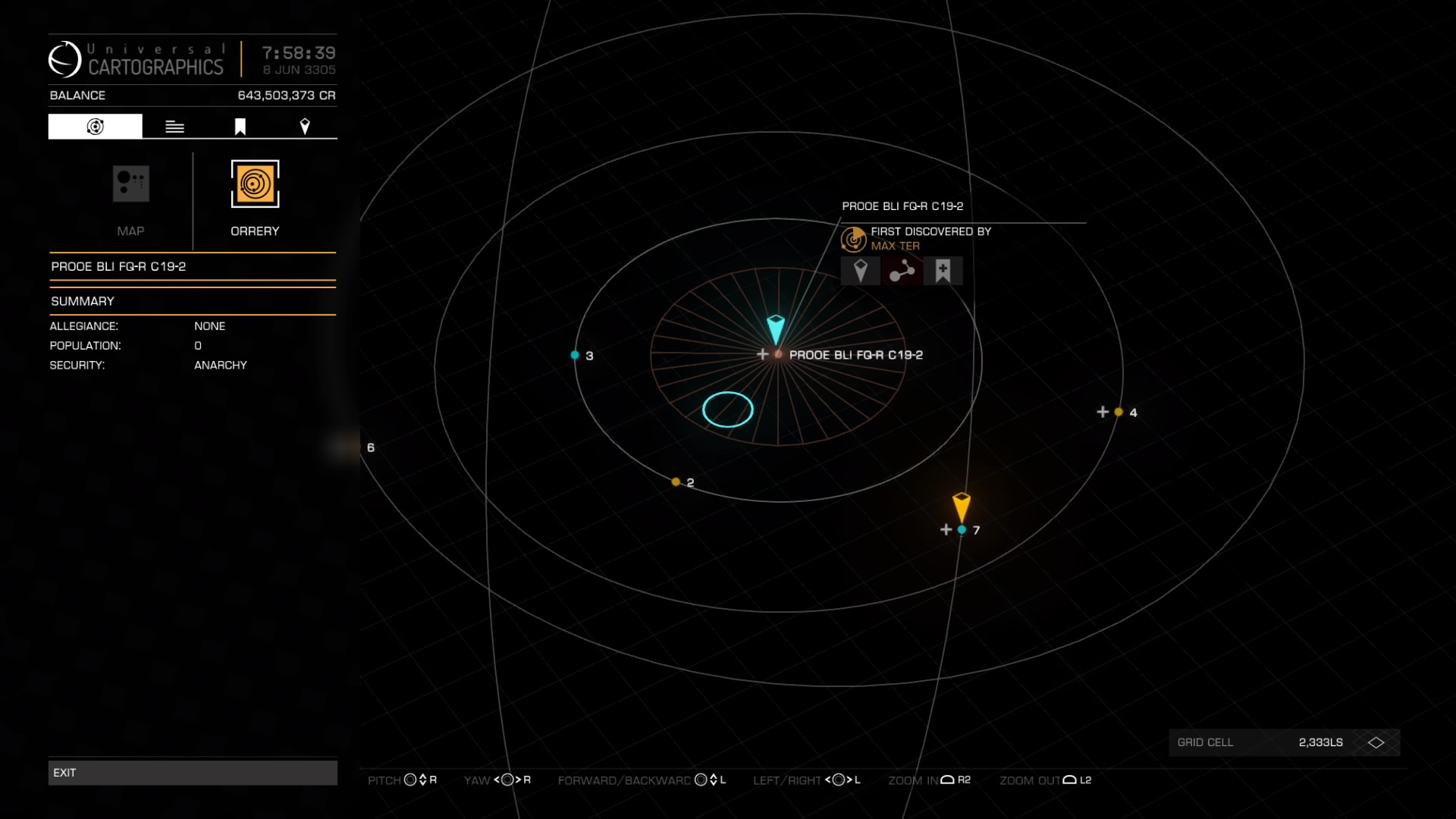