Hutton goes to the Antarctic - Voyage 2 (3307), along with the Fuel Rats and Canonn Interstellar

Some of you may remember that early in 3306 (yes, that's 2020), CMDR Dogsbreath was mission leader on a trip by the Australian Antarctic Division down to a number of the research bases in the frozen south as part of Operation HOTMESS. He had on board a couple of Hutton Mugs and gave us scientific and voyage updates from the journey, including some fascinating science insights into the work they do down there. The mugs made it home, and were part of Hutton's charity fundraising during 2020 - helping make a HUGE total for Hearing Dogs and SpecialEffect. 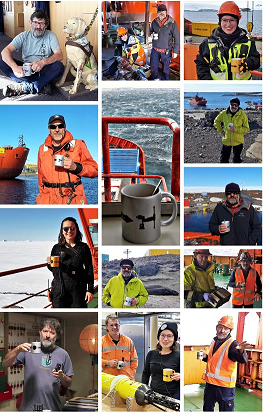 For their next voyage, they're aboard a different vessel - the MPV Everest and this time they've taken a selection of awesome Fuel Rats and Canonn Interstellar goodiesdown to the Antarctic, to be signed and returned to Hutton in the name of charity once again. 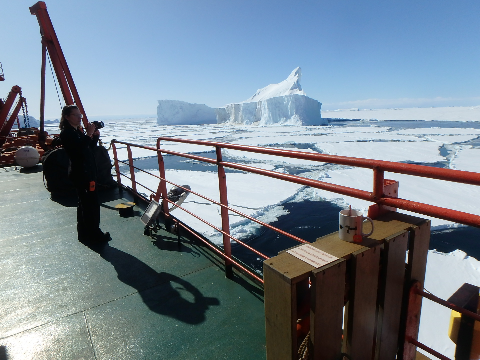 We will be following their journey, receiving messages from CMDR Dogsbreath as they make this vital journey - its purpose, to Fuel Rat Casey station in the Antarctic to keep it running for the next year. On its return, it will then immediately be making a 2nd journey down there with yet MORE Elite goodies on board for charity.

Today's "official" sitrep from on-board can be found here:

Once again, our huge thanks to the Australian Antarctic Division for their participation in the charity fundraising efforts and of course to the entire team on board who have taken all of this silliness to heart and are bringing us all the updates.

For info on Brad - their on-board Fuel Rat (honourary) and the operations - here's an intro video: 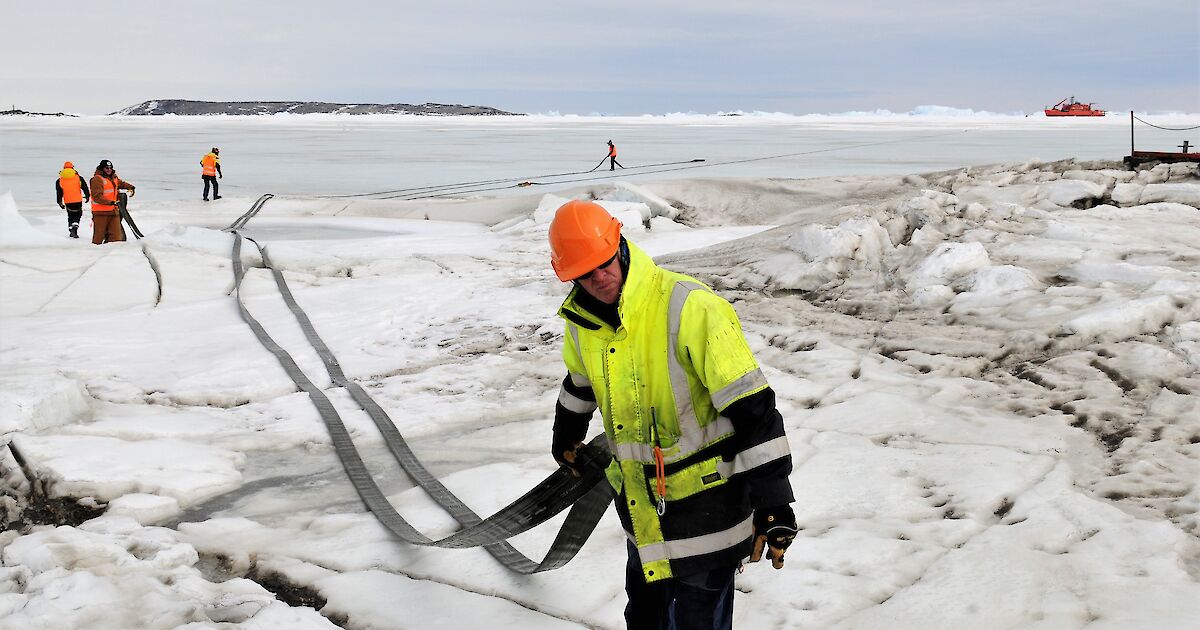 All the signs pointed to Brad Collins ending up in Antarctica. 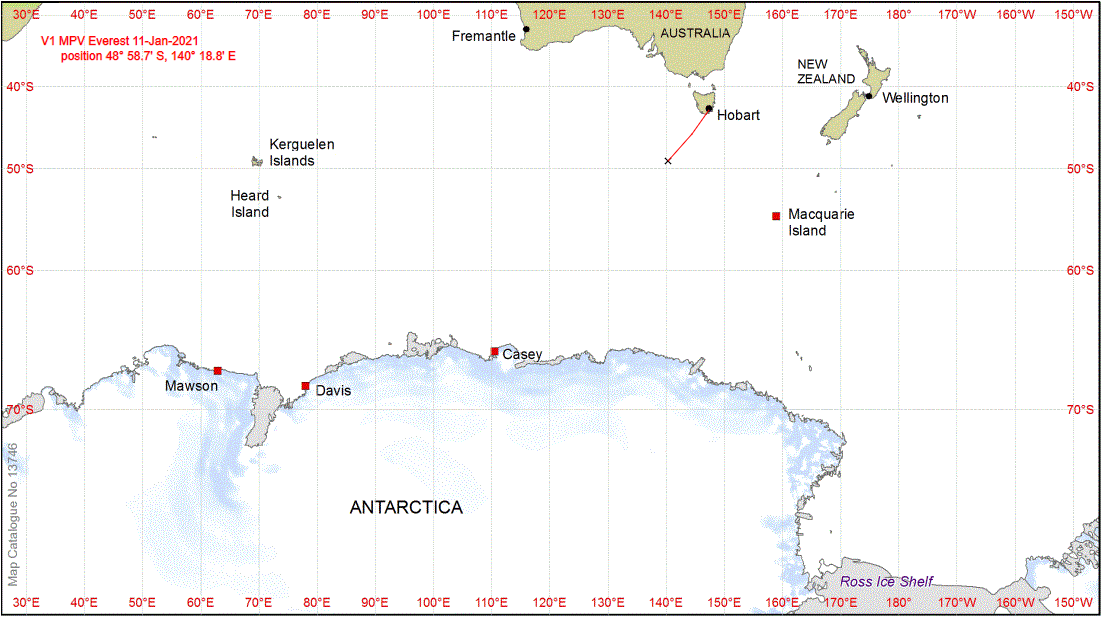 If anyone has any questions that they would like us to relay to the vessel - whether it's about the science they do, or the Fuel Rat operation and how they refuel the station down there safely, feel free to post here and we'll send them over.

I was about to ask - but then I went to Google directly.

This trip's ship, the MVP Everest: 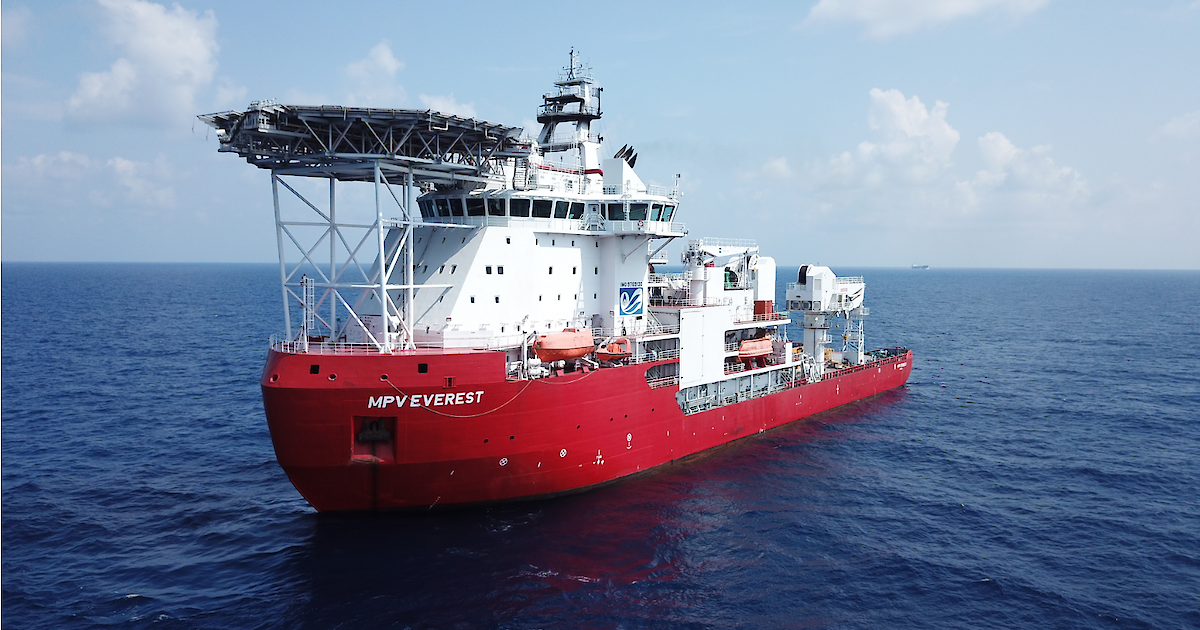 Learn about the MPV Everest — an ice class, multipurpose construction vessel chartered in the 2020/21 season.

But I have to say, I prefer the looks of the designated successor, the RSV Nuyina:

The Australian government is delivering a new world-leading Antarctic icebreaker to replace the Aurora Australis.

That heli platform on the Everest definitely looks somewhat out of place - and how and where do they get the chopper in a hangar if it gets choppy?

Those kinds of helicopter pads are really really important if there's ever a problem - there was an emergency at one of the Antarctic stations about a month ago and it took a collaboration between Australia, China, Italy and others to get a helicopter down there, build a runway, get a plane down there and evacuate a very poorly expeditioner back to safety in hospital.

I'll ask the crew whether they can tell us about the helipad and things in a future update for you!

I believe that the Nuyina wasn't ready in time for the voyage, hence why the Everest was designated as a stand-in. The new ship really is VERY high tech... We will, of course, be bringing updates from that as it starts its service life.

Excellent stuff! Safe travels to all on board.

Solid looking Type-7 they have there.

Great to see this again, will be following with interest.

I haven't stuck this thread honestly.....

Awesome stuff! Fantastic to see this happening again and looking forward to following the updates. Safe travels one and all!

We have had an email from CMDR Dogsbreath on board:
"Did a tour of the hyperbaric modules today. Amongst the top 5 dive ships in the world with an 18 person, 300 meter dive capacity. Will try to send some pics. Very poor comms though so only getting occasional connectivity. Will try to send you some pics..."

Today we find ourselves making steady progress towards Casey on a very mild swell, anticipating we will reach 60 o in approximately 48 hours. This morning the ship's crew conducted their regular safety briefing whilst AAD supervisors continued to delve into the finer details of planning and rostering the station resupply operation. Undertaking this resupply from the MPV Everest, we are working to harmonise our standard procedures with the capabilities and procedures of the ship and its crew. Another critical consideration for this resupply is how we implement our activities in accordance with COVID-19 protocols and best practice guidelines to ensure the safety of those on ship and station. These plans continue to be refined through consultations held aboard the vessel and with counterparts at station who are working equally hard in their preparations whilst also administering normal station function.

Beyond these novel considerations, expeditioners aboard the ship are honing their skills in the fundamentals of Antarctic operations, with the team of watercraft operators conducting a navigation workshop early this afternoon. Other briefings relating to cargo, refuelling and environment have been scheduled for later in the week as we approach Casey.

Socially, the solemn responsibility of administering the iceberg sweep has been handed to Jeff, our refuelling supervisor whose honesty and integrity is more than likely up to the task. The ship's crew graciously hosted tours of the engine room today. Mealtimes continue to be a highlight of the day with seemingly no end to their variety and deliciousness. 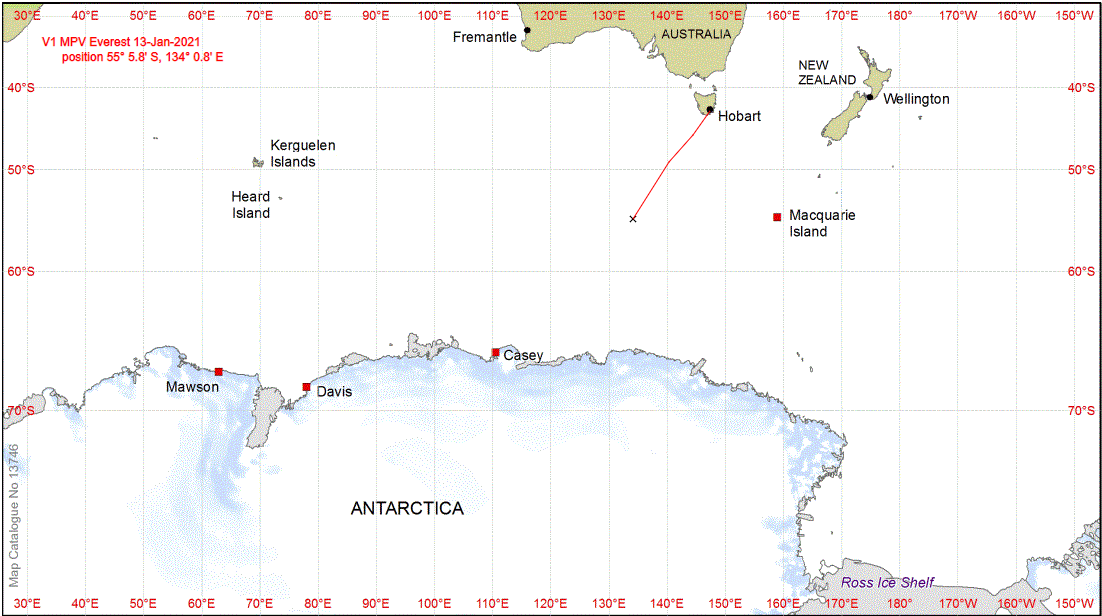 The "Elite" interpretationof the above: The on-board Fuel Rat team, whilst in transit, have been put on lookout duty for growlers,bergs and bergy bits.

The dwarf bread was brought out for inspection. But it was miraculous, the dwarf bread. No one ever went hungry when they had some dwarf bread to avoid. You only had to look at it for a moment, and instantly you could think of dozens of things you'd rather eat. Your boots, for example. Mountains. Raw sheep. Your own foot.

Thursday
The ice-berg sweep donations box and timings sheet was laid out in the mess this morning. As if summoned, the first iceberg was spotted by our very own hawkeye, Doctor Cath D. Against a backdrop of clouds, it sits off the starboard horizon, a darker shade of grey atop a glimmering sea. For many aboard the ship, this will be their first sighting of an iceberg and in a way that's exciting for us all.

The 'deck of cards' fitness regime has been adapted to COVID-19 precautions with expeditioners performing their repetitions inside their own cabin whilst other expeditioners pace a circumnavigation of the bridge deck, bobbing past the windows besides our current vantage point. Ringed by tilted windows each several metres high and wide, the bridge itself is an expanse of dark wooden floorboards, consoles, workspaces, chart tables, communications consoles and control panels. Beyond the workspaces are nestled tea and coffee stations, lounges and client work stations. The view forward of the bridge is framed by white support columns for the helideck. The view aft looks back towards the cargo laden main deck and the imposing 250t and 50t cranes. Stairwells lead upward to the helicopter departure lounge / heli-deck and down to the 'Office Deck'. One deck below and our teams are spread across a sprawling series of office spaces and conference rooms making planning and coordination amongst our shipboard teams considerably easier than over online forums as it had been during our quarantine period.

Beneath an overcast sky on an increasing swell, the MPV Everest continues its passage southwards.

Today a series of briefings have been held for AAD expeditioners and crew on environmental protocols, station inductions and trainings on local area conditions and appropriate clothing at Casey station. Voyage supervisors met to review operational planning documents whilst the watercraft team held a daily meeting to discuss kit and operating procedures.

At almost the precise moment the ship crossed 600 latitude this afternoon, a brief gathering of crew and expeditioners was held in the expansive mess for an exchange of speeches, King Neptune certificates and applause between the ship's crew and AAD expeditioners. The enhanced social distancing measures in place do little to deter the good humour and rapport generated by a collection of the earth's people rolling around on one of its oceans.

After rigorous scrutiny, a ruling has been made on the ice-berg sweep. As neither Cath D (the official ice-berg sighter) nor the vast majority of the ship's contingent had registered their bets at the time the first (and so far only) ice-berg was sighted. 800 odd miles from the Antarctic coastline, it was a long way from home. As a by product of this phenomenon, it was determined that the sweep was technically won by its organiser Mr Jeff M, with all proceeds going to the Australian children's charity 'Camp Quality'. 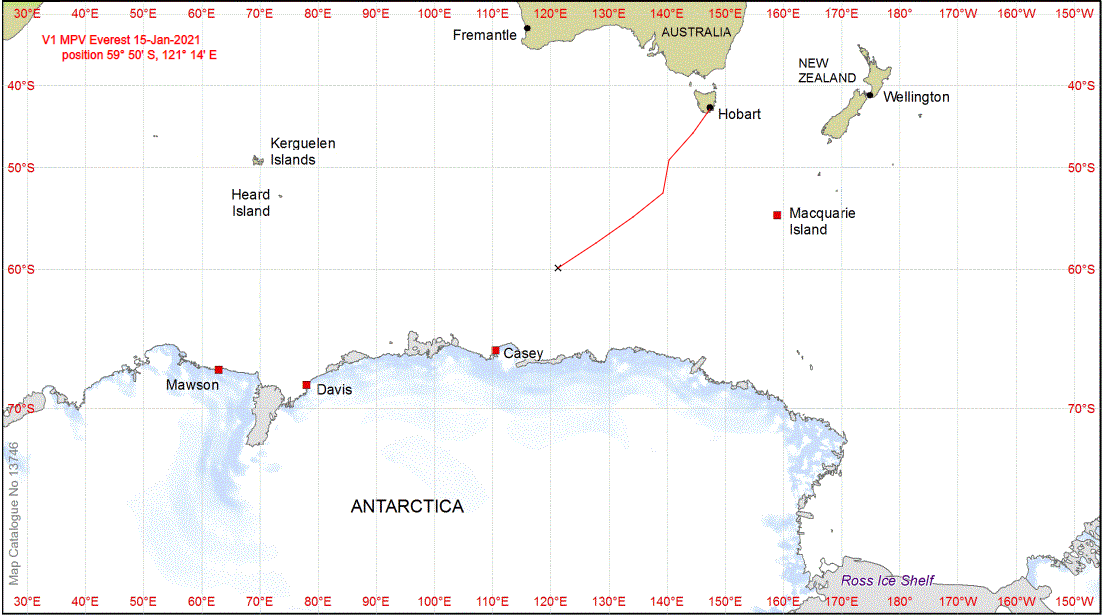 Also - we cover some more detail about the expedition and the vessel (It's a specially designed Fleet Carrier with only one medium pad....) on the Hutton Orbital LIVE show - this week now available on YouTube - Source: https://youtu.be/Wu9GlsJBaoE
Last edited: Friday at 9:54 AM

Thanks so much for posting & safe travels !

My only question is does it support VR?

Funny you should ask - on the LAST expedition they were joined by a team with LIDAR equipment who scanned the entirety of the ship AND as I recall the base they visited and area in 3d for EXACTLY that purpose.... SO the answer is - YES. One of the updates that Dogsbreath sent us was a photo of a Hutton Mug being scanned by the gear....

"The ship is sailing in calmer seas today as we approach the sea ice edge. Whales have been sighted by ship's crew, as have a scattering of icebergs.

Today expeditioners and crew attended operational briefings on ship to station refuelling and illegal, unreported and unregulated (IUU) fishing vessels (as yet not a feature of this voyage). The ship's crew continue to undertake 'winterisation' procedures, to safeguard equipment and systems on the ship against damage from the cold.

Meal times remain a thorough highlight of the day. Exercise routines maintained amongst a disciplined few. On the monitors in the well-appointed cabins, the 24/7 cycle of films continues its inexorable run as does the 4 cup coffee plunger sitting atop the meeting table in the voyage management workspace. There, our comms tech Brett maintains a stoically composed vigil against a procession of IT challenges, zen like a Japanese rock garden beside a thoroughfare of briefings, banter and ... folk music. Recriminations over a spilt coffee cup have subsided after the latest version of a cargo discharge plan took on a bespoke, 'buried treasure map like appearance.'

With favourable conditions we anticipate reaching station somewhere between tomorrow morning (17th) and the 18th. Having negotiated around a series of weather fronts, the major determinant now for our arrival time remains the condition of the sea ice ahead of us. Despite timely and high quality sea ice imagery and interpretation c/o of the Bureau of Meteorology, it remains difficult to predict how it may impede our progress. With present conditions, there's the prospect of navigating through a fairly sparse corridor of sea ice and into the polynya (open expanse of water) off station but, as always, time will tell.

We're yet to hear whether the incident involved an unstable Fuel Rat mug, or a Canonn drinks bottle.... Though Canonn are rather enamouredof the idea that they MIGHT be involved in a buried treasure map somewhere.

They'll be reaching destination soon(tm) and offloading their expeditioners and starting Fuel Rat operations.
Comms appear to be sporadic and of low bandwidth, so we've not had any pictures yet, but hopefully the space whale spotting is going well. 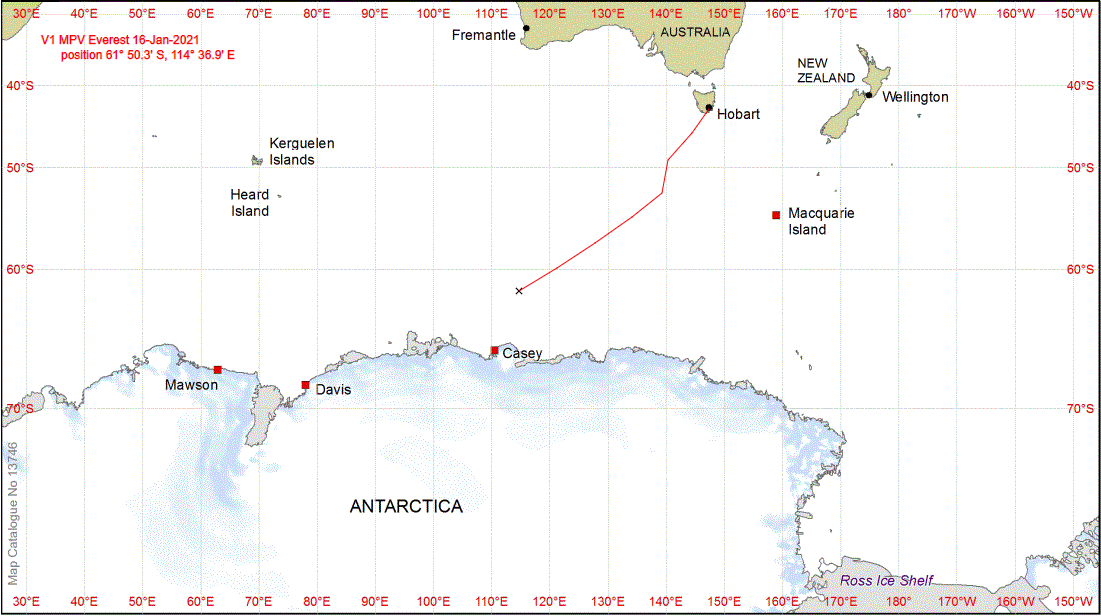