If Guardians were alive, would they be for or against humans?

It depends on which ones endured. The cybernetic ones that embraced and integrated AI - they won't have a problem with us. The puritanical bio-bombing Luddites -we will bury them and put flowers on their graves. Special flowers. Big green ones.

I think they would be for us, probably with some ketchip or mayo.

They fought the bugs cause the bugs wouldn't communicate with them. The bugs are now not communicating with us. Enemy of my enemy is my friend situation. They'd probably help us exterminate the Thargoids at the very minimum

They seem similar to humans in many ways from lore so likely against. Frenemies at best.

You seem to be assuming the Guardians had a single authority and always acted as one group.

Flip it round. How would Humans react to them? Wait, is that the Federation? What about the Empire or Alliance? Oh but what about the fascist states and people (see Ramirez ('s Commander) above). Then what about groups like the Fargod cult or a Guardian worshiping equivalent?

In other words I think you are vastly over simplifying things.
Last edited: Jun 9, 2019

H
Would they even notice us, or are we too insignificant for them to be aware of Mankind?

After going to one of the Guardian Structures for blueprints, a thought came into my mind: If Guardians were alive, would they be hostile towards us like Thargoids, or could we possibly become allies and fight the Thargoids together?

Depends who would be responsible for game development, who would write the scenario and what would he eat for breakfast.

Hell Razor5543 said:
Would they even notice us, or are we too insignificant for them to be aware of Mankind?
Click to expand...

Judging by their infrastructural style and sentinels, I'd say it would be the other way around.

If I woke up or came back home to see that a swarm of cockroaches had messed up my domicile, I'd probably exterminate them all.

Well, they would hastily arrange peace with the Thargs and then both of them will be all over us

I'm pretty sure they would consider us as primitives 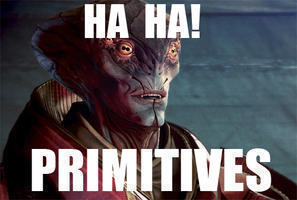 The Guardians, by all accounts, were a more peaceful, tolerant society (internally) than our own, with fewer internal factions and divisions. They may have been xenophobic; we simply don't know as they were never given a chance to interact with any sentient species other than the Thargoids, who certainly are inherently xenophobic.The Guardians had "races" (local minor genetic variations causing differences in physical appearance), for example, much as Humans do, yet they never seemed to have fought inter-racial conflicts to the same extent that Humans traditionally have - this implies an inherent desire to see past superficial differences and find common ground.

I think the Guardians would have been perfectly capable of peaceful coexistence with Humans, though I think the eventual outcome of their interaction would have hinged a lot on the circumstances and nature of First Contact. Would we have been meeting as more or less technological equals, or would they have found Earth while we were still savages, and mentored/uplifted/enslaved us? If we met as "equals" (i.e. in spaceships or at space colonies, rather than one landing on the other's homeworld), would the individual representatives of each race have been curious, or apprehensive? Humans, especially the "frontier humans" who are more likely to be in First Contact scenarios, have an annoying tendency to "shoot first, then keep shooting because questions are kind of redundant by then" attitude if they feel threatened.
You must log in or register to reply here.
Share:
Facebook Twitter Reddit WhatsApp Email Share Link
Top Bottom