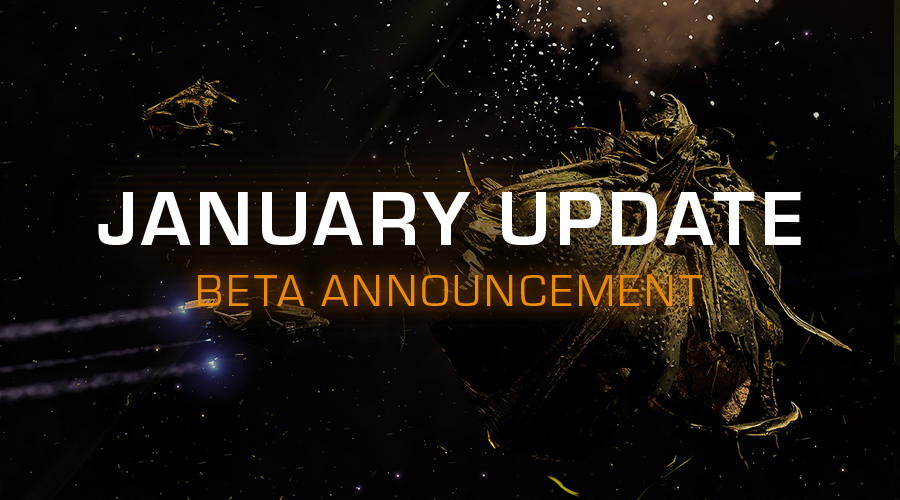 As mentioned in October, our upcoming updates will be almost exclusively focused on addressing recent and longstanding issues and bugs. The next update will be our first step as part of that - and it will be coming towards the end of January.

For this update, our first and foremost priority is to ensure that everyone is able to have a seamless experience when playing Elite Dangerous, so our focus will be on aiming to resolve game breaking bugs and stability issues that cause disconnects, softlocks and crashes. By working internally with Customer Support, QA and Development teams, alongside the feedback you shared with us here and via the Issue Tracker, we've identified and are addressing a number of issues in the January Update, which we've detailed below.

As with previous betas, we found your feedback and assistance incredibly useful in helping us identify and resolve bugs and issues. The next updates will be coming with their own public beta, the first of which will run on PC from 27 November to 2 December for the January Update. We are also investigating the ability to extend future betas to console players as well, and will announce any developments about this when we have more information.

Due to this update focusing on a number of bug fixes, rather than new content and features, the beta will appear and play very much like the existing live game. However, getting involved and testing provides a huge benefit for all Elite Dangerous players, so we are very grateful for any time that you are able to spend in the beta. Every system, ship, loadout, module, mission, activity, rank or other part of the game played provides opportunities to test and identify issues. With your support, we hope to be able to identify and fix as many as possible before the update goes live, offering a smoother and better experience for all. Thank you to all who are able to get involved.


What we're addressing in the January Update (and the beta)
We wanted to highlight some of the top voted issues from the Issue Tracker, and what we plan on doing with them moving forward.

Alongside our own internal tests, we'll need the help of you, our community beta participants, to help us identify if the fixes we're introducing work as intended in a live, multiplayer environment.


We wanted to bring your attention to the following issues, as these will need additional information and testing in the beta to ensure the fixes are working as intended:

FSS: Long delay when scanning planets with geological sites
Conflict Zones have no contents
The Invincible Heart
Instance splitting when fighting Thargoid Interceptor
Thargoid Interceptor - Heart cycle reset
Exiting the Game just hangs, need to force terminate
Please note that this is not an exhaustive list of all of the fixes coming in the January Update and more will be detailed in the beta patch notes, released next week.


We'll be investigating the following issues for future updates and will detail any fixes for these when available:
We also wanted to give you an update on the following issue: VR: Double Vision and Incorrect Rendering on HMDs with Non-Parallel Displays (ex. Pimax). At the current time, there are no plans to provide support for new HMDs outside the officially supported systems and platforms. The officially supported platforms are Valve Index, HTC Vive and Oculus.


BETA - how to get involved!
A new beta section forum will be set up with details on how to take part and how to submit bug reports, but here are the main details on how you can help us in the upcoming beta:


We just want to thank you once again for all the passion and involvement you show for Elite Dangerous. With your participation, we know that we can help to make our game more sustainable and beneficial for the future of this amazing galaxy!

glad to see beta servers are a thing now

Well that's a bunch of awesome choices for bugfixes !

Awesome update. Especially looking forward to the tiling issue in high res screenshots. I can get back to experimenting with screenshots!

Thanks guys! I'll be sure to jump in and do some AX testing

Edit: The Invincible Heart bug likely is hard to reproduce for you guys if you're using a LAN and PCs within metres of each other. It's a networking issue that happens when pilots from all over the world play together.
Last edited: Nov 21, 2019

ooooo exciting
Please dont forget about orbit lines not being visible when using the system scanner in VR. Ticket is submitted.

I'm very happy to see this!

Although this beta has no bread involved, its good to see ED get some long overdue fixing.

Will stability also fit in, like with multicrew etc?

Rubbernuke said:
Although this beta has no bread involved, its good to see ED get some long overdue fixing.

Feel free to jump in the beta and test anything you like. All feedback is great for the future of the game.

It's great to see the amount of bugs being fixed, but also a very clear communication of what to expect and what needs testing, feednack etc.

All these details are very helpful and appreciated.

Chat icon displays "1" while no message is there
Click to expand...

Yeeeeah! Now i can die happy

breaks down in tears of joy

Any chance of a Beta for consoles?

Arimus said:
Feel free to jump in the beta and test anything you like. All feedback is great for the future of the game.
Click to expand...

Yes, but I mean is will FD be looking at P2P holistically and not just rubberbanding? Its hard to judge improvement if you don't really know if anything has been tinkered with.

Snowymonk said:
Any chance of a Beta for consoles?
Click to expand...

"We are also investigating the ability to extend future betas to console players as well, and will announce any developments about this when we have more information. "