Spooky Games and Snack Stands are now available on the workshop!! 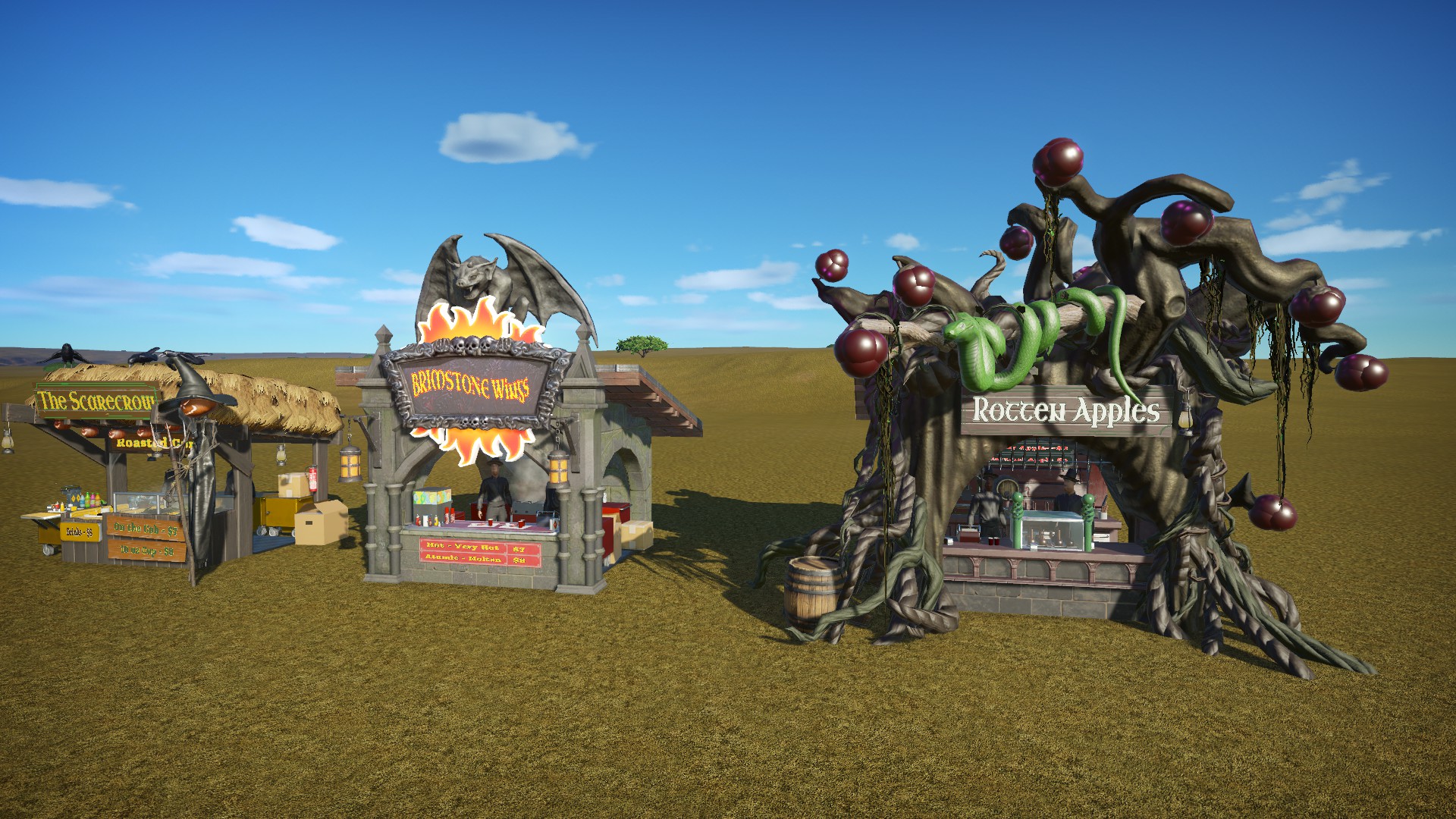 R
Are you going to offer your haunted houses as separate items? I would love to have the Widow haunt as a blueprint. I wish Frontier would have made the ability to have walk through mazes that worked with a special path system sort of like the mini golf path from RCT2-3.

Well they are just facades. The Widow's Attic is just stuff stuck on the outside of the Bumper Cars building. It's hollow inside. I might upload some of the facade parts for the different haunts.

R
Did you try any of lilibat’s stuff? She made all those glowing skeletons and other stuff. I love the idea of the special haunted attractions and stuff on the piers. Do tmtk items cause laggy parks without guests? Billboards? Even if you would use no tmtk items and billboards would it still lag? Is it the amount of individual pieces in buildings and such that make the park lag? And the power of one’s computer. Mine is an average desktop but it has a good cpu and graphics card. When you move away from the piers and town it lags less. I noticed though that the game was broken with an update last November I believe, and the tmtk. The tab switching became slow, and I believe installing tmtk items would slow down things as well. They tried to fix it with patches.

Toolkit items are fine now and cause no extra lag. I did indeed use lots of Lilibat's amazing stuff. It's perfect. My park is just REALLY full. Ha ha

R
I tried the park again and I can move around but I let it sit for a while and it gets stuck sometimes where I can’t move, the mouse gets stuck like the game freezes. I checked the computer memory and it’s like 12,000 something. This park really hogs memory.

Yeah. And autosaves lock it up for 10 or 15 minutes sometimes...

R
I added some more pier to the side and back of the pier with the Zephyr coaster. I’m going to add more rides, including a train ride, a haunted attraction, maybe another dark ride or two, and more.

R
I’m upset right now. All of my subscribed blueprints and parks vanished in game, but I’m still subscribed to them in steam. What is the solution to fix that? Unsubscribe to all of them then resubscribe to them? That means bookmarking over 1000 urls to subscribe to them again after I mass delete them.

Verify your game files first. Might just be a glitch.

R
Everything is coming back now, whew. Just my subscribed things by others were affected. My own files were still there.

Weird. Glad they're back!

R
I can’t wait for the haunt version of the piers, but large parks really hog memory. I think my memory is 32 and it is upgradable to 64. Would adding more RAM help? I got a new desktop a few months ago because lightning fried my 5 year old one. And I had a surge protector battery backup. Is it the amount of individual pieces in a park that bog the game down or the use of toolkit items? The excessive use of billboards? Will no computer no matter how powerful solve the problem of low FPS and slowdown on large parks? Even with the graphic settings on low or off? I loaded up Midnight Manor park file and it says a music file is missing, but I have all the music files. Would you mind if I used the Manor in my own parks (I figured out how to save the parts of it and reassemble it) or build a park around the Manor in the park that it’s in? One idea I had was to build a Seaside Heights like park with the Manor, Casino Pier in Seaside Heights, NJ had a ride through haunted ride called Nightmare Manor, later remodeled into Stillwalk Manor. Hurricane Sandy destroyed it and it fell into the water, part of it washed ashore several miles away. It was at the far end of the pier. There were two piers in Seaside Heights, Casino and Funtown. Funtown was damaged by Sandy and burned down later.

I don't mind at all. I get the missing music error too! Ha ha! That ride has so many speakers I never found which file it's missing. I think it's a combination of number of pieces and excessive billboards. KP has tons.

R
I don't mean to steal your thunder, but I made a pier park with your Lost Expedition ride and the Manor which I was able to move by saving the grouped buildings separately. Also I used your space ride and Bats in the Belfry. I made a two floor ride called Witch's Castle that I put in this park near the manor. I posted an incomplete version a while back, https://steamcommunity.com/sharedfiles/filedetails/?id=844925243 My park will be easier on the cpu. If you use too much stuff it bogs the game down and takes way too long to load. Fish's park has too much detail in it including the town which makes the fps drop. Even with all of the graphic settings low or off, it still has low fps. I wanted to have my own version that would actually be playable with guests. So, my park will have less detail, less "stuff" than Kaleidoscope Piers in order to have decent fps. No Volcano mine train or whatever it's called, no haunted mine, no mousetrap factory. Almost no billboards. Very few toolkit items. A very simple town, if at all.
You must log in or register to reply here.
Share:
Facebook Twitter Reddit WhatsApp Email Link
Top Bottom