Let's see where this little ravine takes me

Back in November 3305 I paid a visit to HIP 23759 to see the Gnosis, which had allegedly got itself entangled in an installation. When I got there the Gnosis had been freed but the sight that greeted me on arrival was spectacular nevertheless. 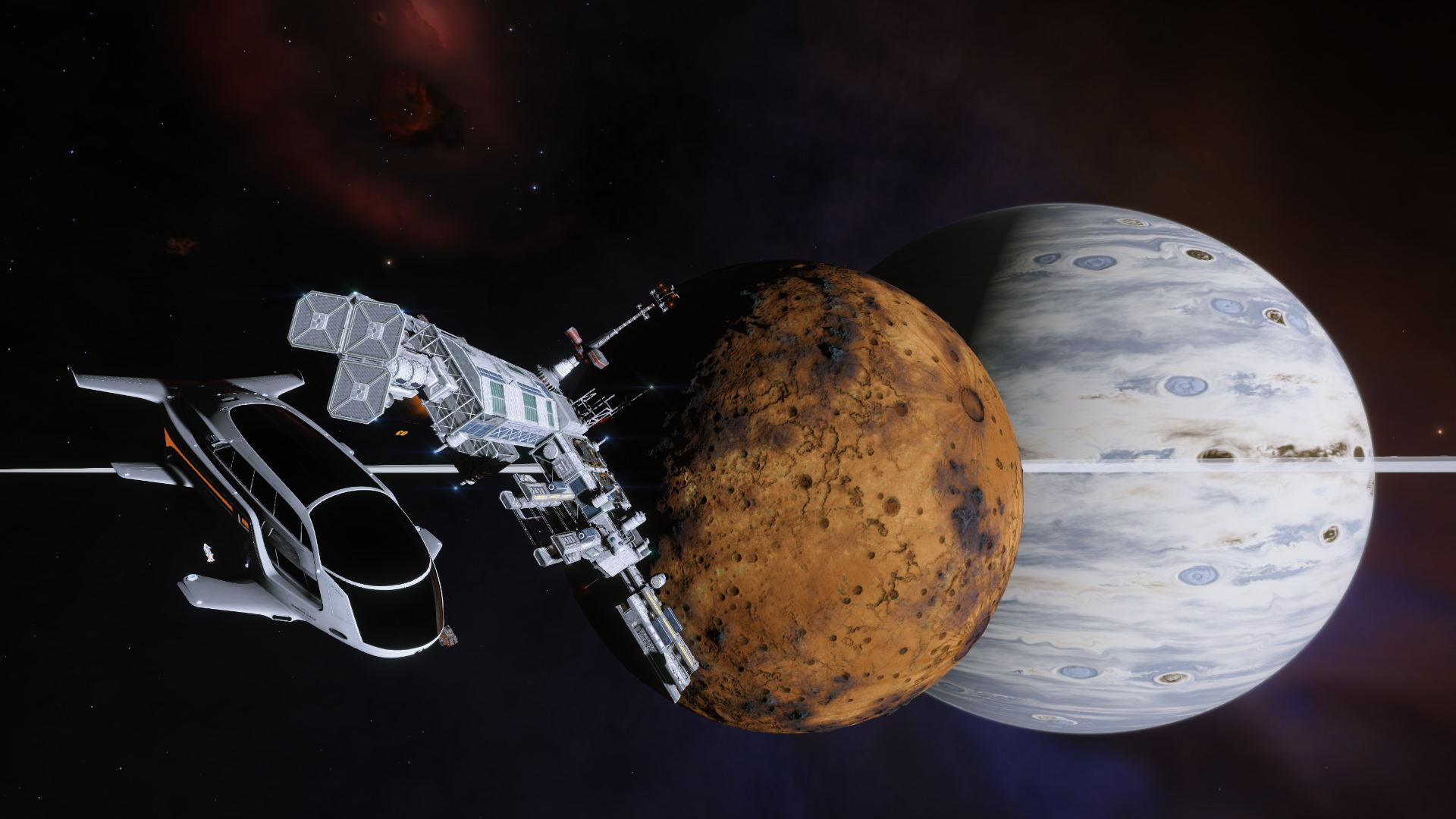 On posting that screenshot in the Screenie(s) forum thread I added the comment "See that planet in the middle there? Seriously considering circumnavigating it."

Well, as 3305 drew to a close (on the last day in fact) I found myself at a loose end and decided to head back out there to take a closer look. 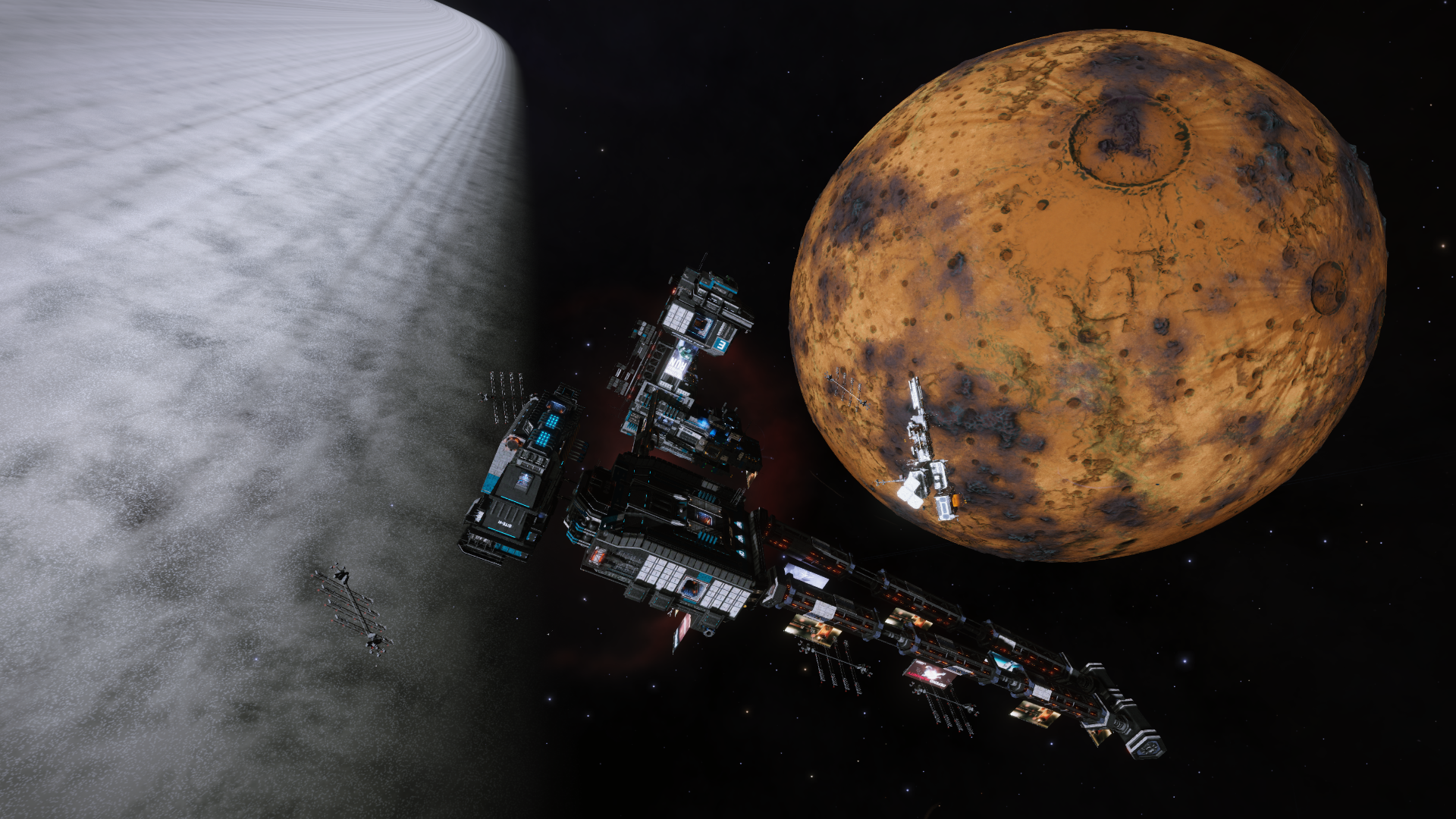 Still glorious! I parked the Bananery Fandango at Columbi's Haven for last minute repairs and to fit a second SRV bay (but alas also an outfitting oversight which would come to haunt me later). My intended target? Planetoid 9 A (looming in the background of that shot). 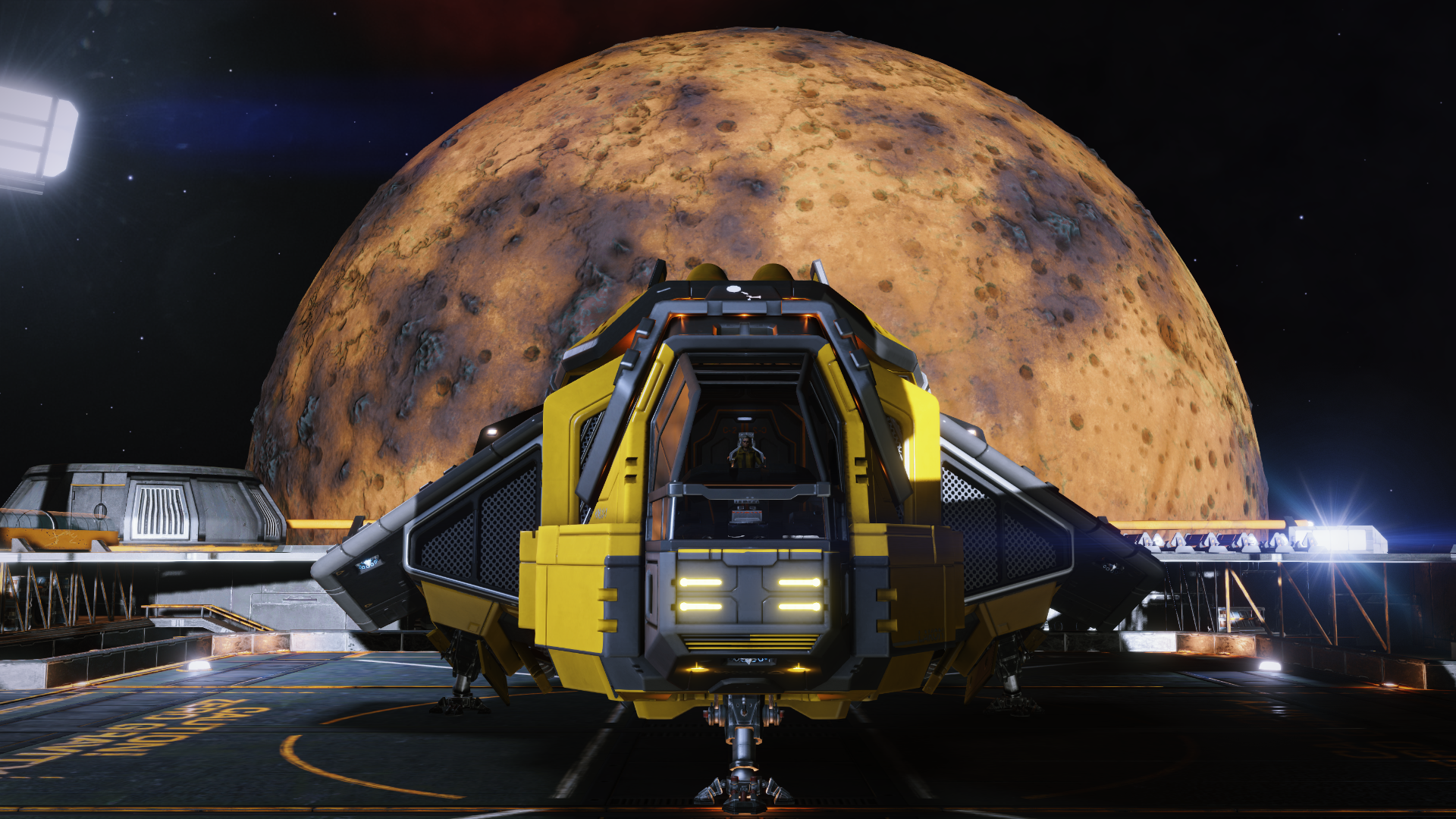 Then, without bothering myself too much about scouting, I touched down somewhere along the equator .. 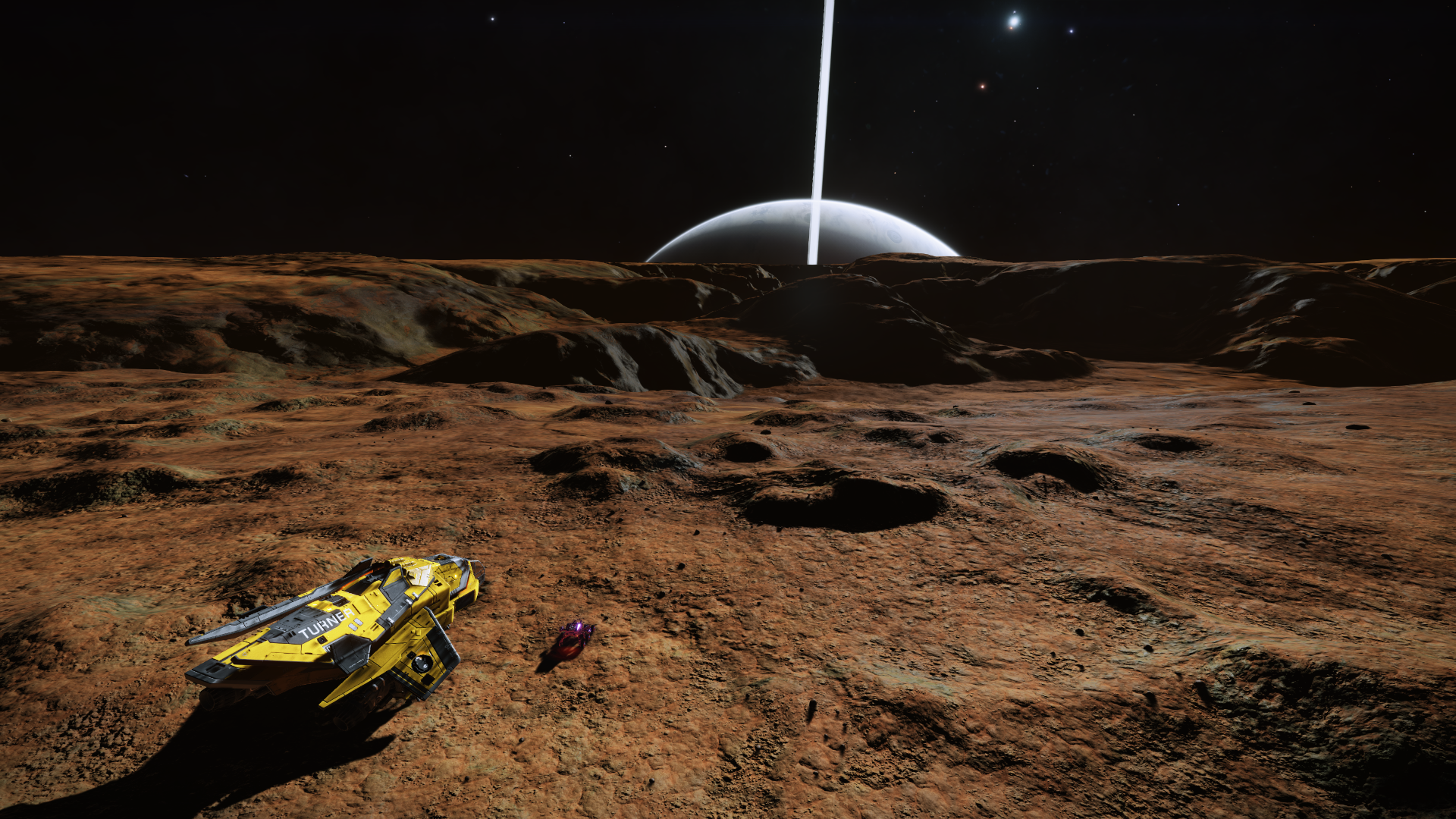 .. pointed myself 90° and headed off. No plans to do a circumnavigation, just ... you know ... a little Tuesday afternoon drive. It was nice, very nice in fact. Here's a view back over some of the terrain I covered in the first drive .. 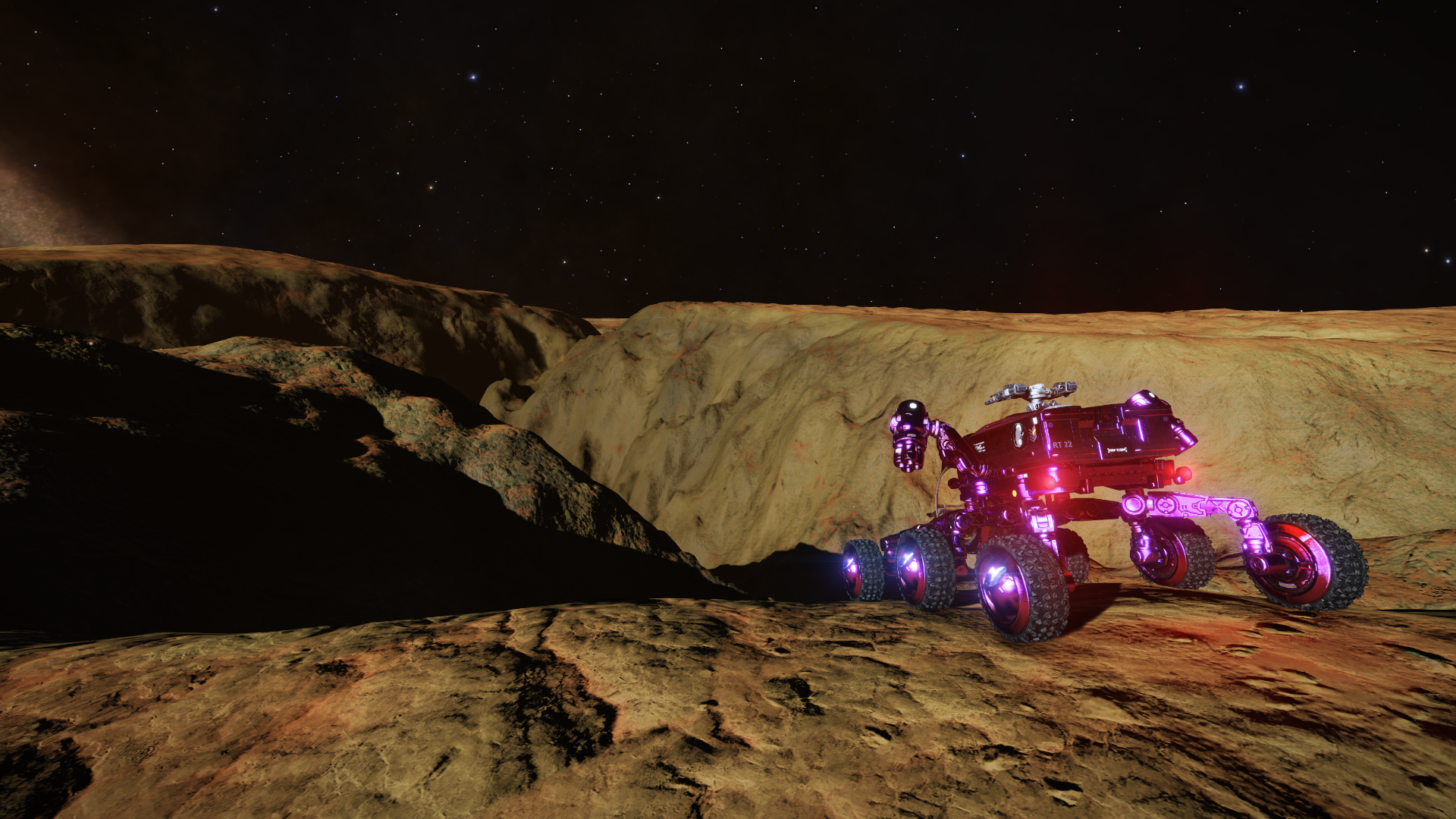 .. and the view ahead, permanently dominated by the parent gas giant and by the edge of its ring rising like a beacon East in the sky. 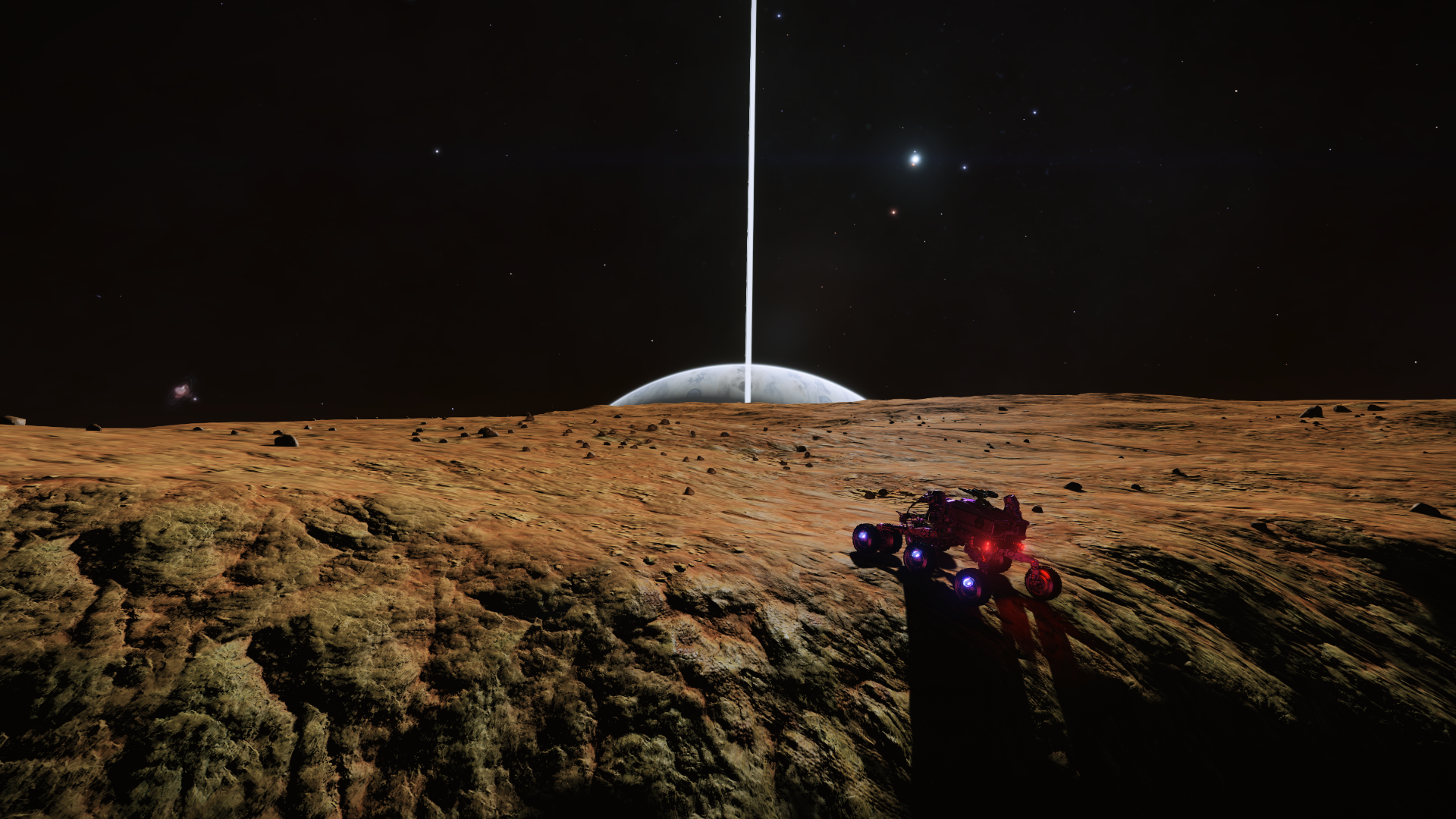 Onwards, and at the end of that session I found myself at the head of a "little ravine" which lead North down towards a much deeper canyon heading back East again. I probably won't do a complete circumnavigation but tomorrow I guess I'll just drive a bit more and see where it takes me. 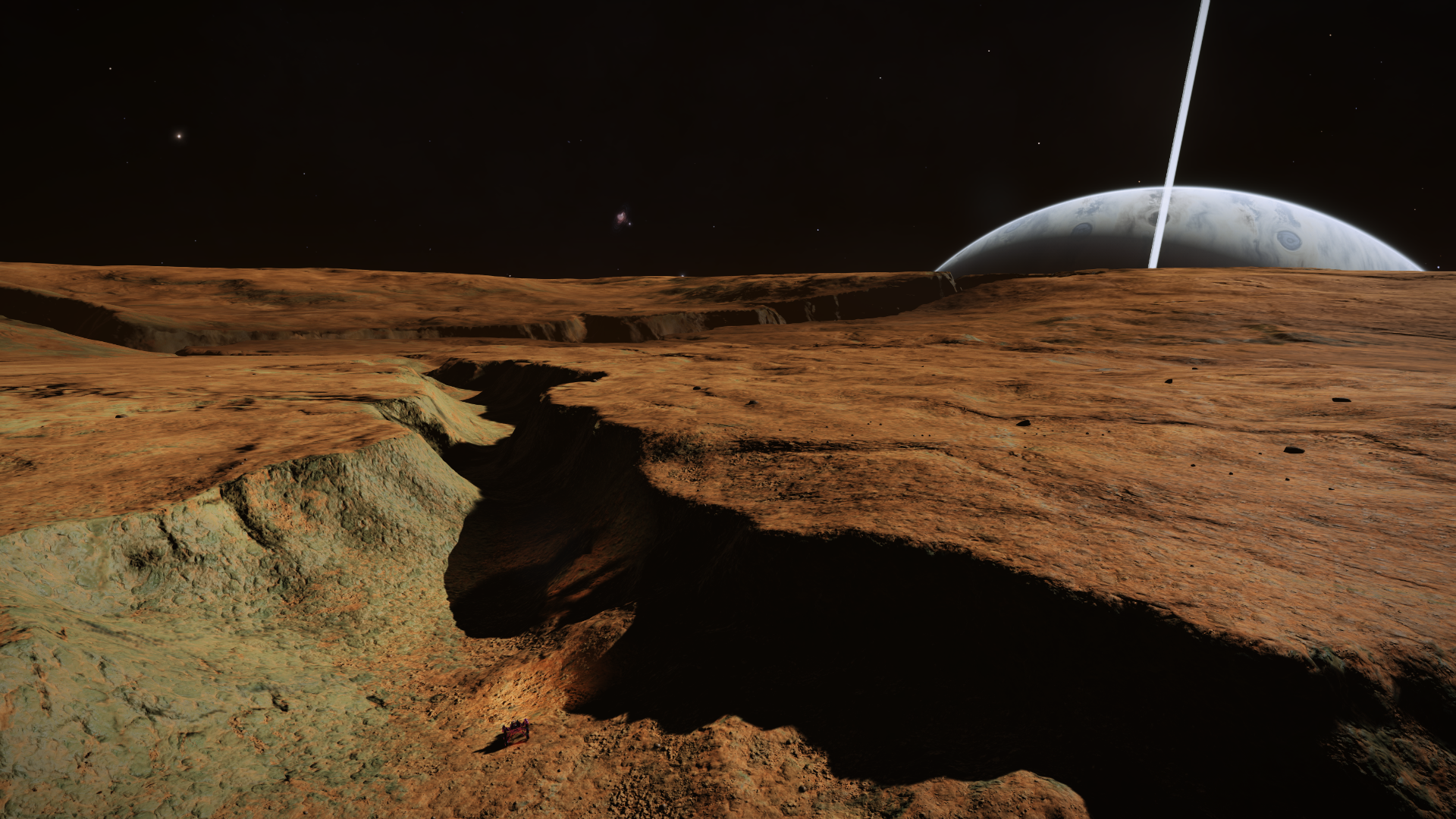 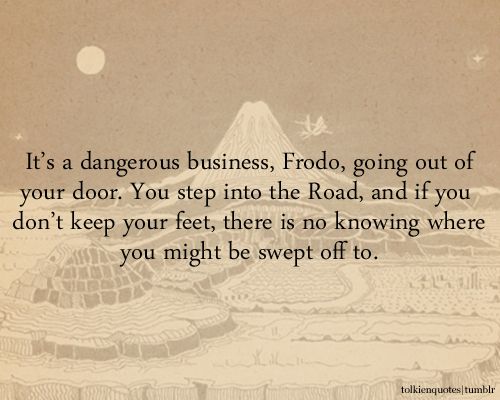 Followed the ravine North down into the deeper canyon and then turned back East for a fairly splendid drive. I suspect this planetoid may have been the inspiration for the Iridescent paintjobs we now have.


Despite being some way from the bubble it looks like I'm not the first to visit this place (although perhaps I will be the first to leave?). 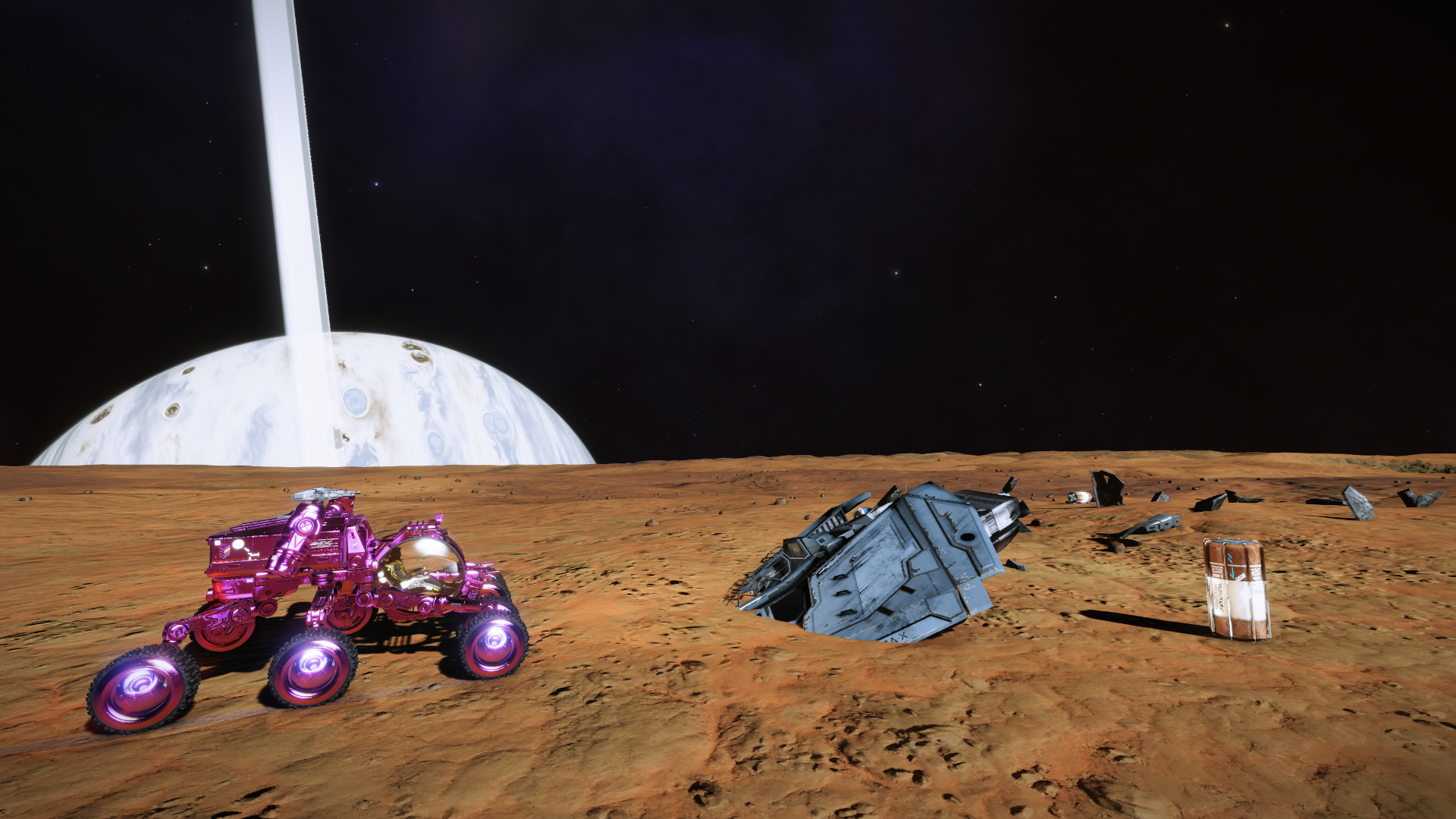 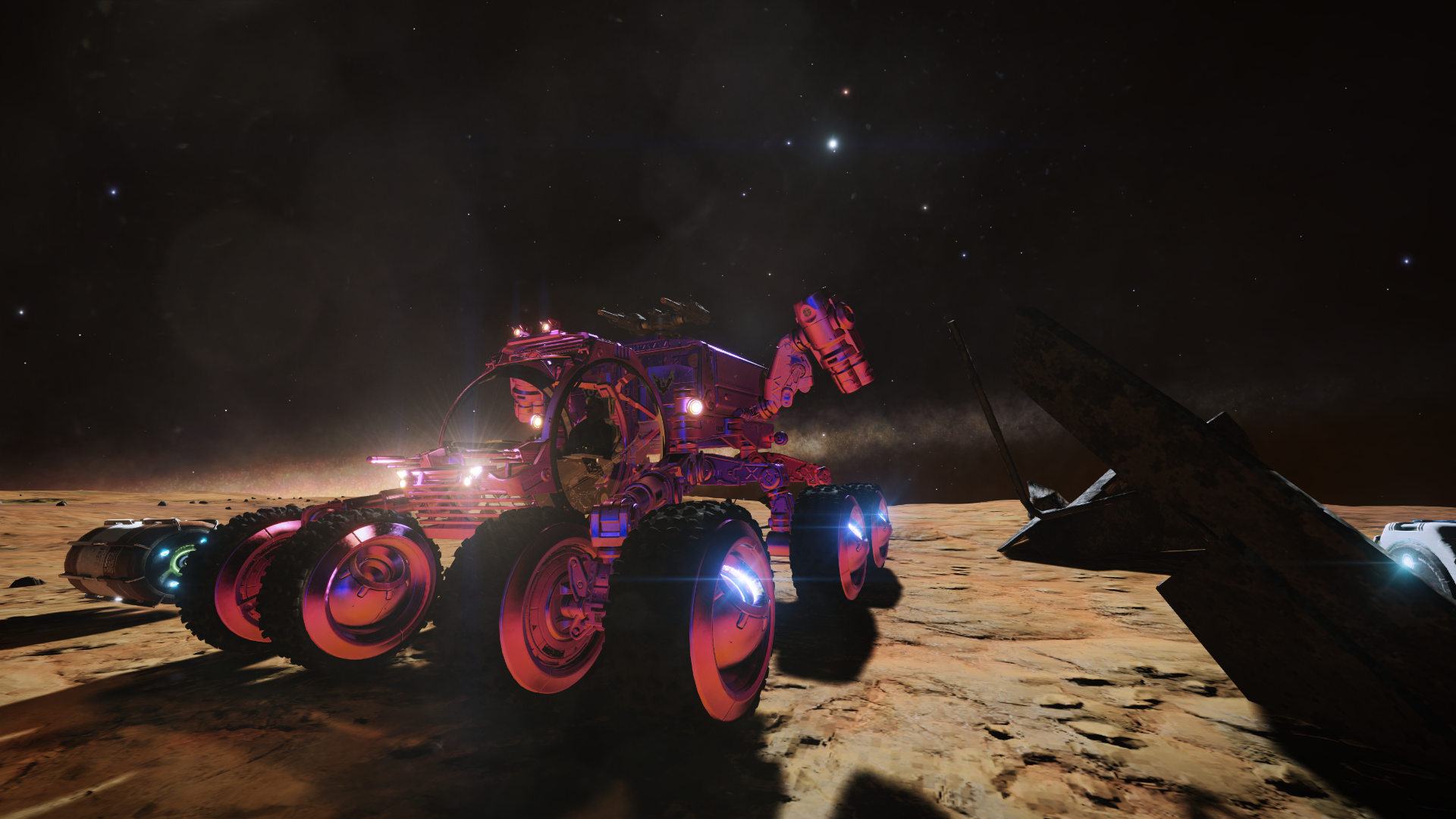 It's only while I'm driving around the wreckage that I find this. 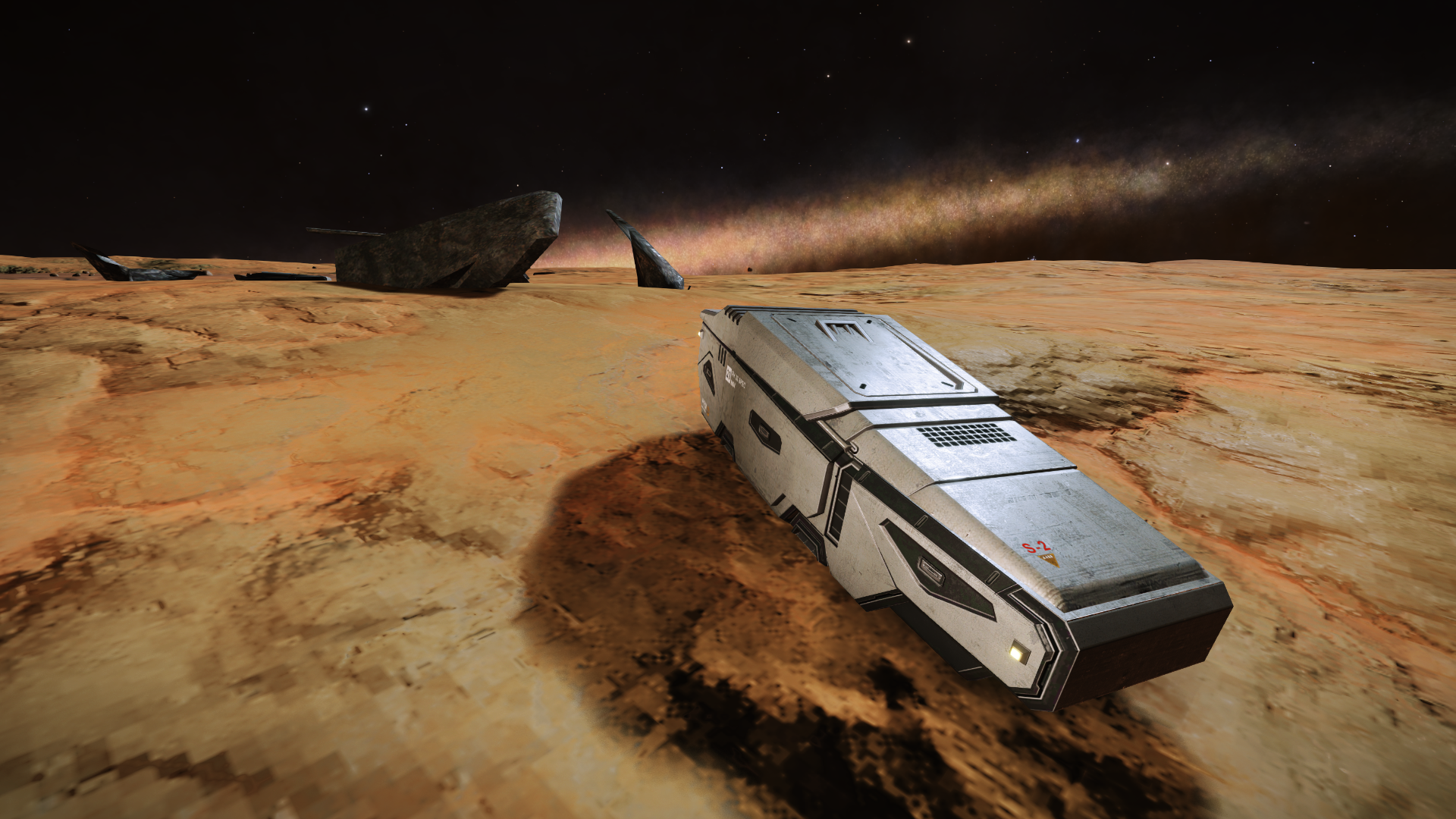 Damn. I didn't really come here on a rescue mission but I can't just abandon this guy so I stash the escape pod in the back of the SRV and recall the ship. 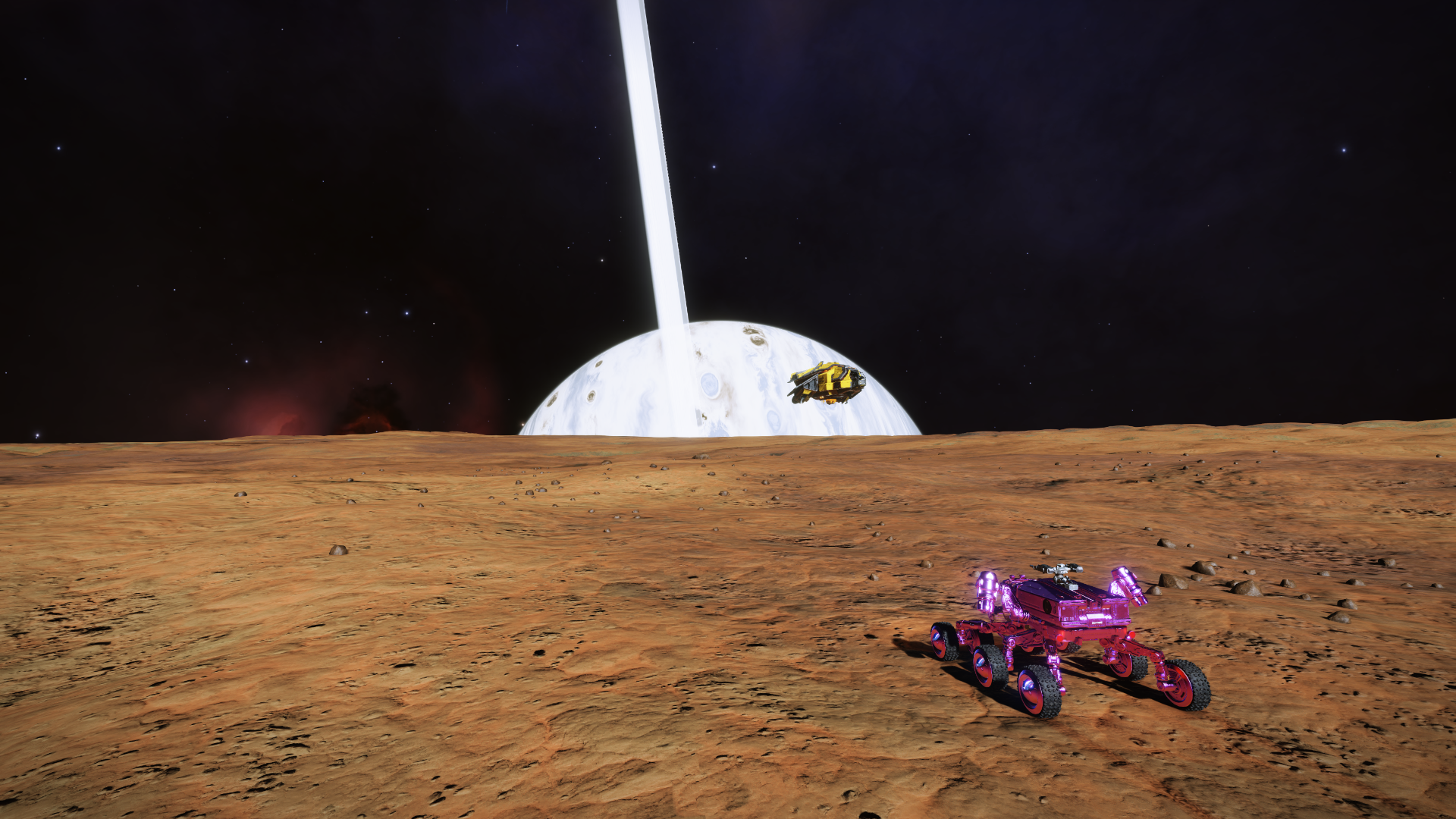 It's only as I get back to the Fandango that I realise my outfitting error. 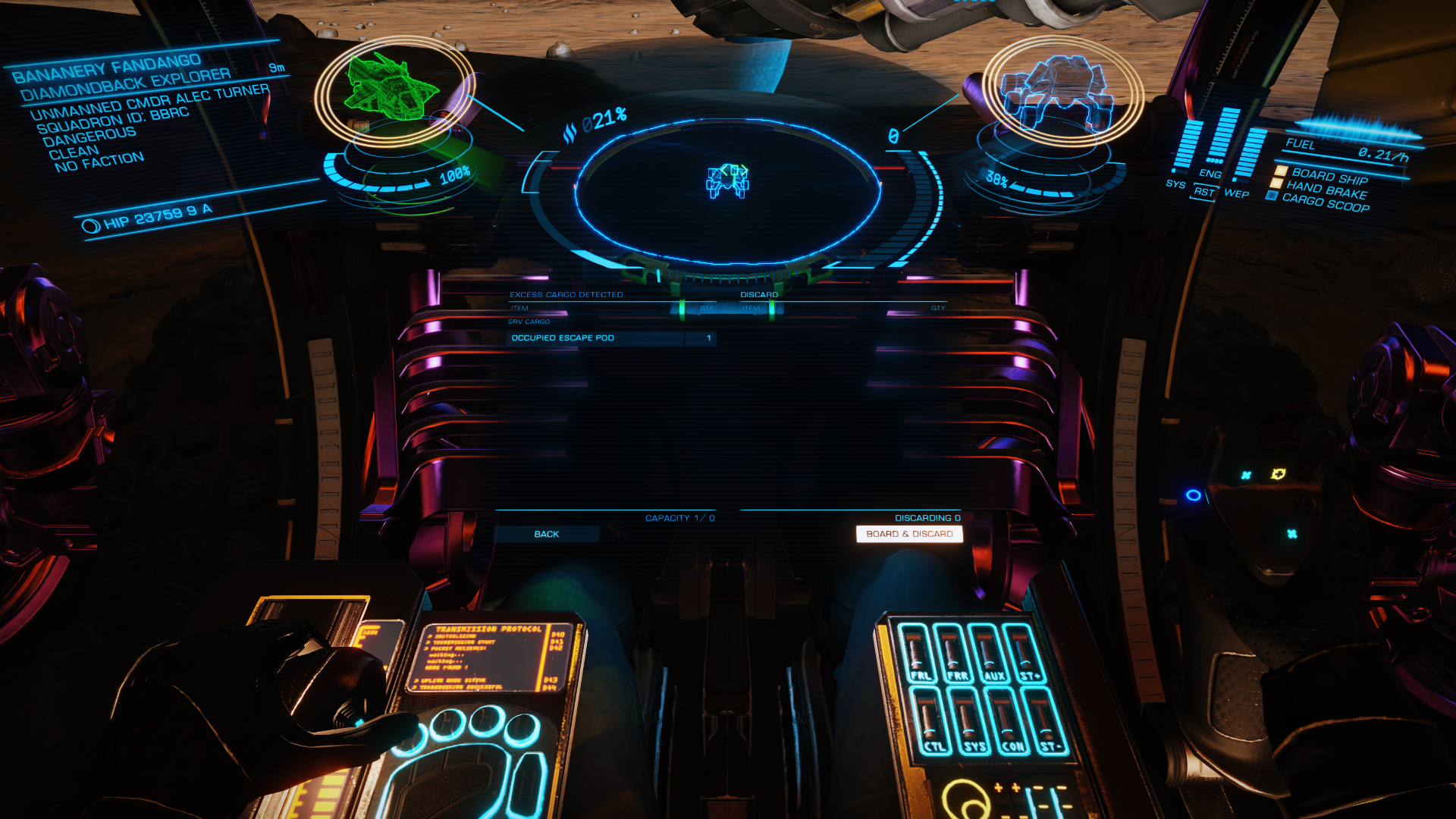 Horror - I don't have a cargo bay!

Oh well, I could go back to Columbi's Haven and get one - it's not like I plan to do a complete circumnavigation ...
Last edited: Jan 2, 2020 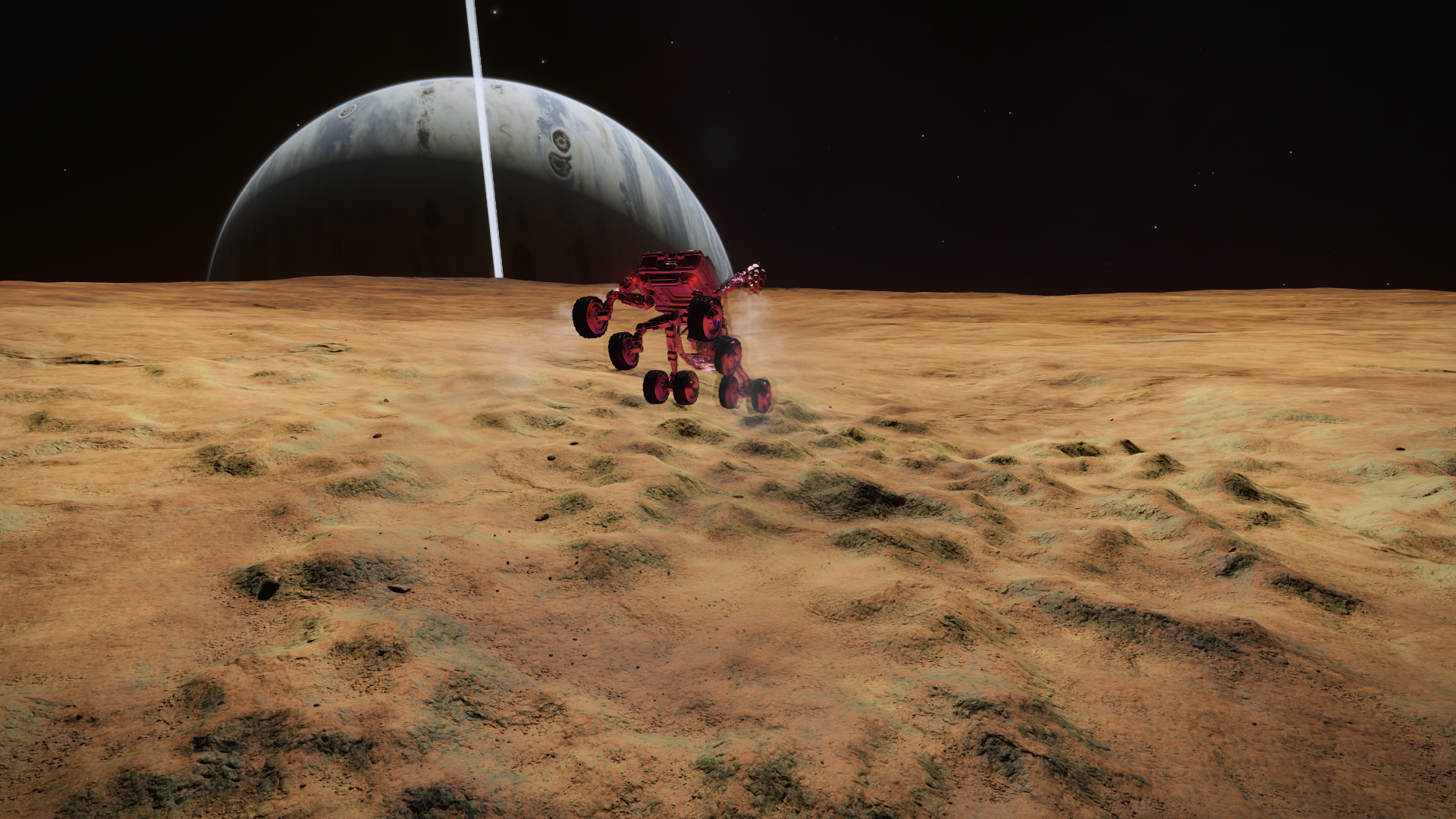 I've now covered just over 14° of longitude which amounts to 3.8% of a circumnavigation. I mean, who cares, it's not like I plan to do a complete circumnavigation. I'll probably go and get that cargo bay fitted, retrace my steps and rescue that poor soul tomorrow. For now tho' ... I'll just park up here. 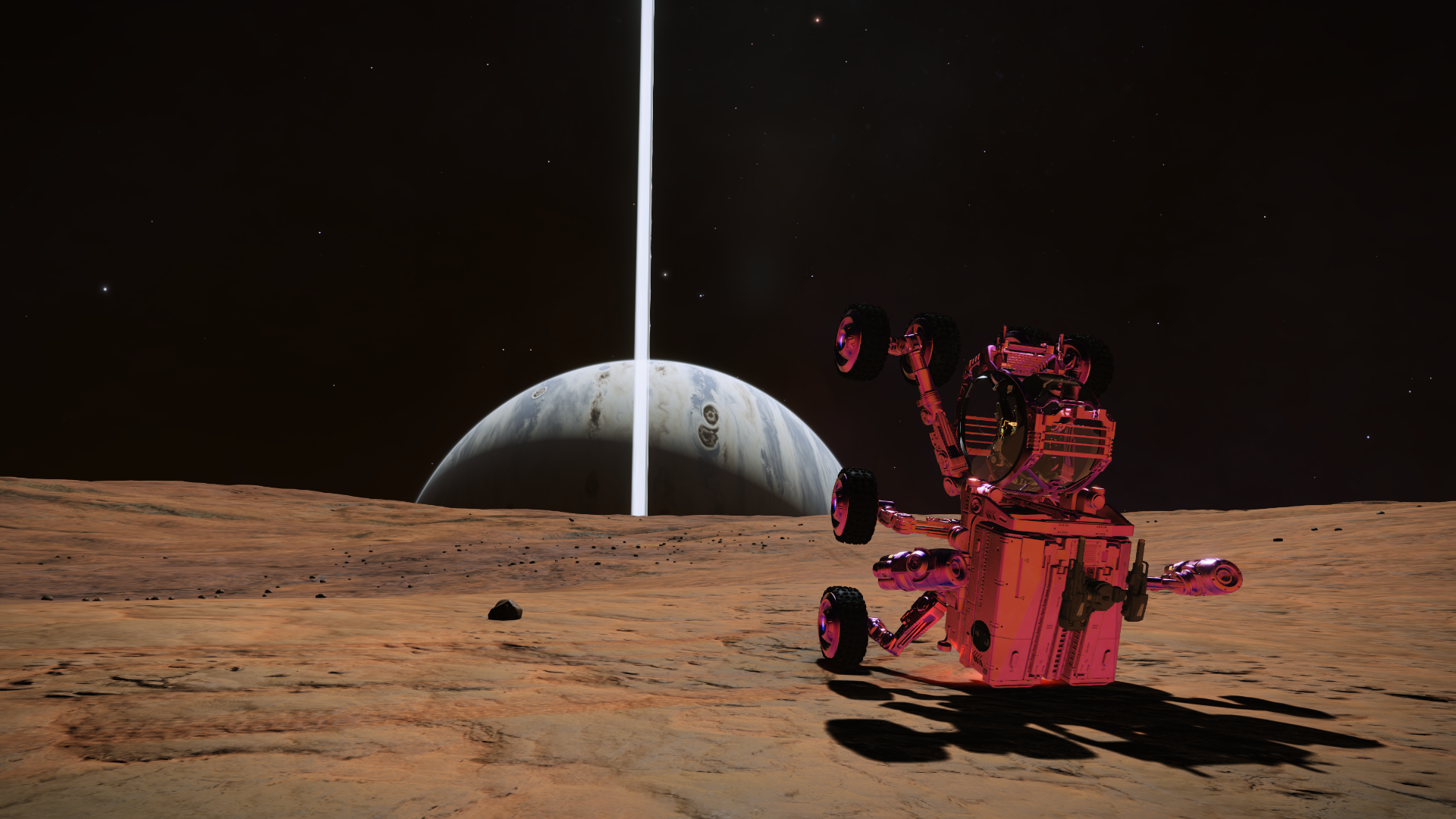 Those are some amazing screenies Alec!!

Rheeney said:
Those are some amazing screenies Alec!!
Click to expand...

I would say stay tuned for many more ... but it's not like a plan to do a complete circumnavigation!

Geek side note...
A moon so close to a ring like this would have been a Shepherd Moon, with the outer looks of for instance Iapetus. It has a significant ridge running along its surface, caused by the 'scooping' of material from the ring.

Geek side note...
A moon so close to a ring like this would have been a Shepherd Moon, with the outer looks of for instance Iapetus. It has a significant ridge running along its surface, caused by the 'scooping' of material from the ring.

As soon as Frontier puts these in the game you know what I'm gonna do?

Pomeche Ridge Challenge 2 - this time there's only one set of gates! ('cos the start line IS the finish line)

Alec Turner said:
I would say stay tuned for many more ... but it's not like a plan to do a complete circumnavigation!
Click to expand...

TBH, with that paint-job I'd be quite disappointed if you're not listening to sth like this while cruising the planes and ravines:
Safe travels down there! o7

The Midnight, particularly Nocturnal, are part of my playlist for Elite in general, not just SRV driving. It's worth it.

Obviously, you're not planning on circumnavigating.

S
Not doing a circumnavigation here...

The essence of exploration "I wonder what's over there?" o7

I've been in a similar situation, just usually with smaller bits....

Neat planet, but I'm not going to land.

OK, I landed, but I'm not deploying the SRV.

I've collected materials. sigh But I'm not going to drive over to that crater.

Wow, what a deep crater!

Substitute 'deep crater' for ridiculously tall mountain and I'm there.

It's no good - the guilt of leaving that occupied escape pod behind has been weighing on my mind so today's first order of business is a quick trip off-world to fit some cargo racks to the ship. 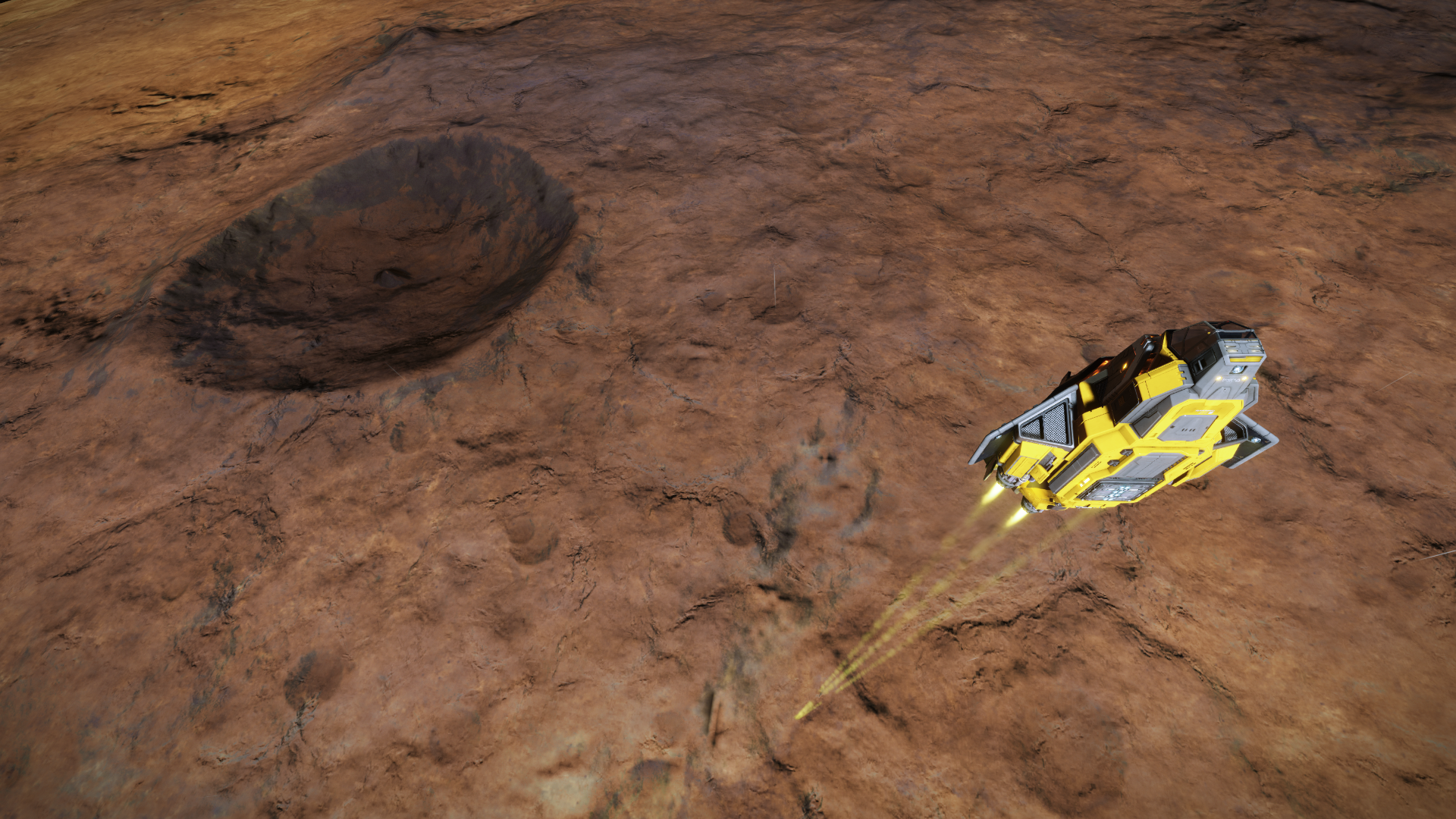 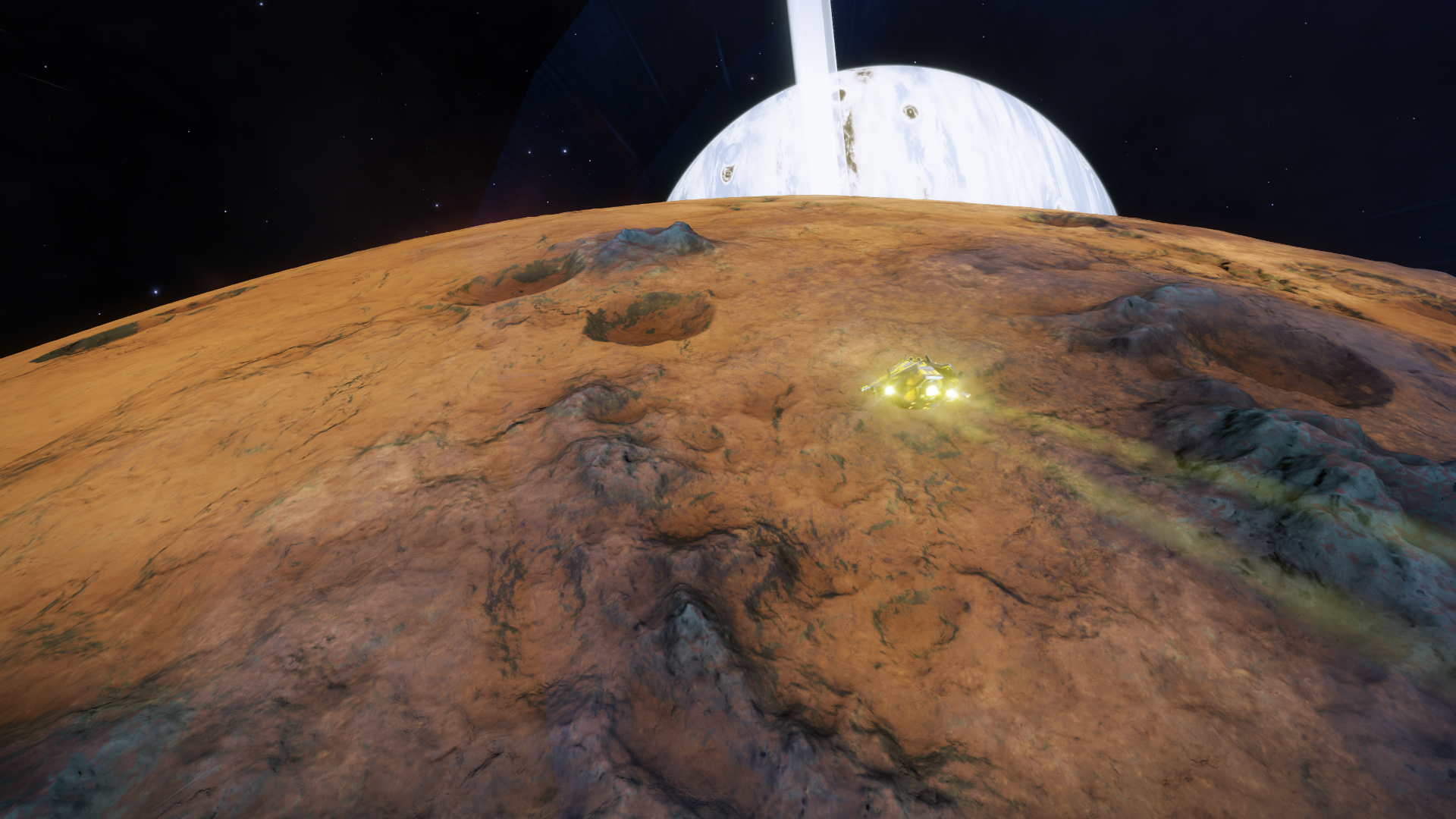 That's better. Alas not much hope of finding the previous escape pod but if I happen to come across a stranded Women's lacrosse team (12 players) then I'm going to be Mr popular! 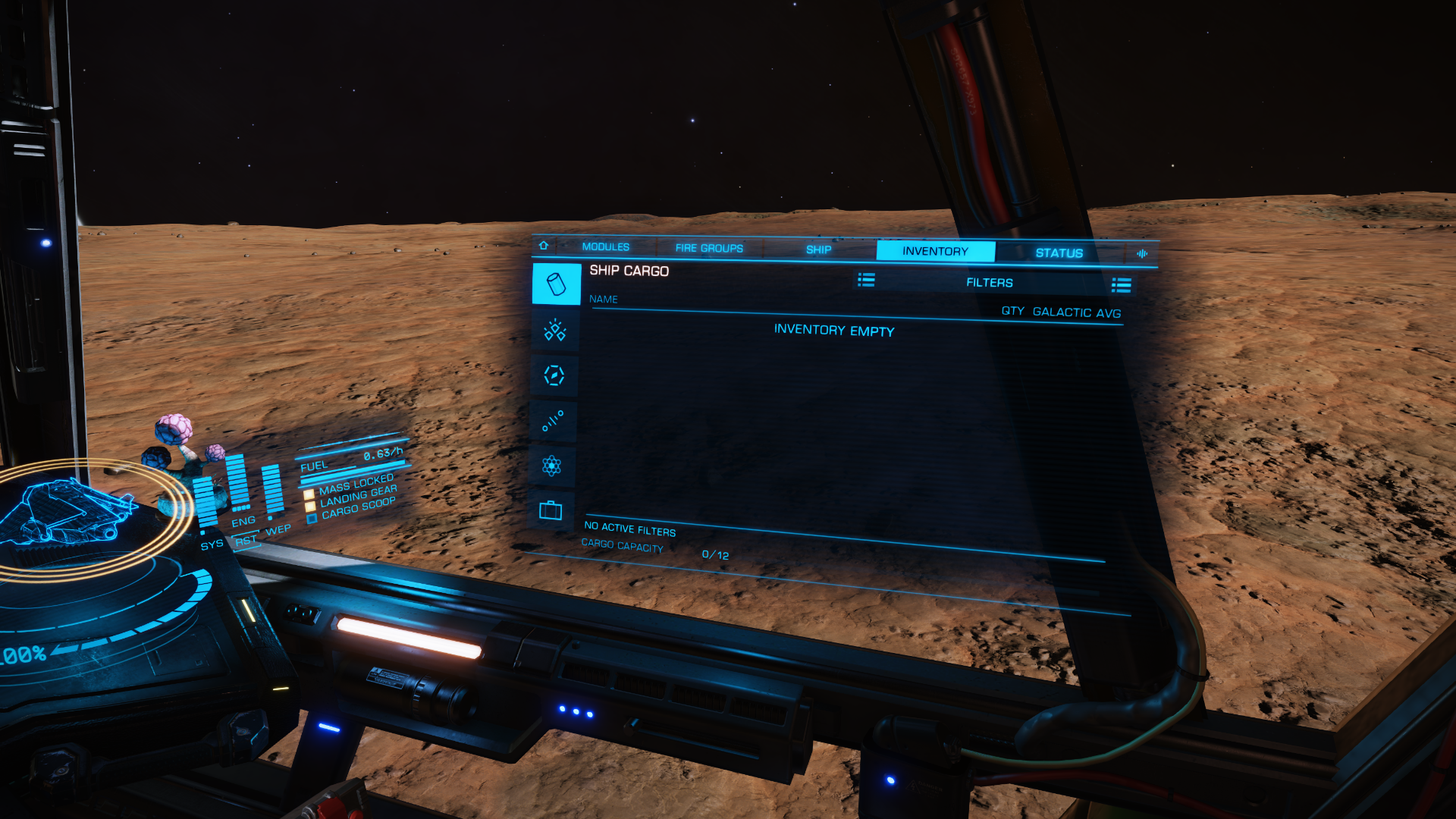 That brief jaunt also provided a nice opportunity to get a better view of the surrounding terrain and a large crater which lies just slightly North of my basic 90° heading. So, with a small course correction it's off to the crater we go. What was it Orvidius said?


Orvidius said:
But I'm not going to drive over to that crater. 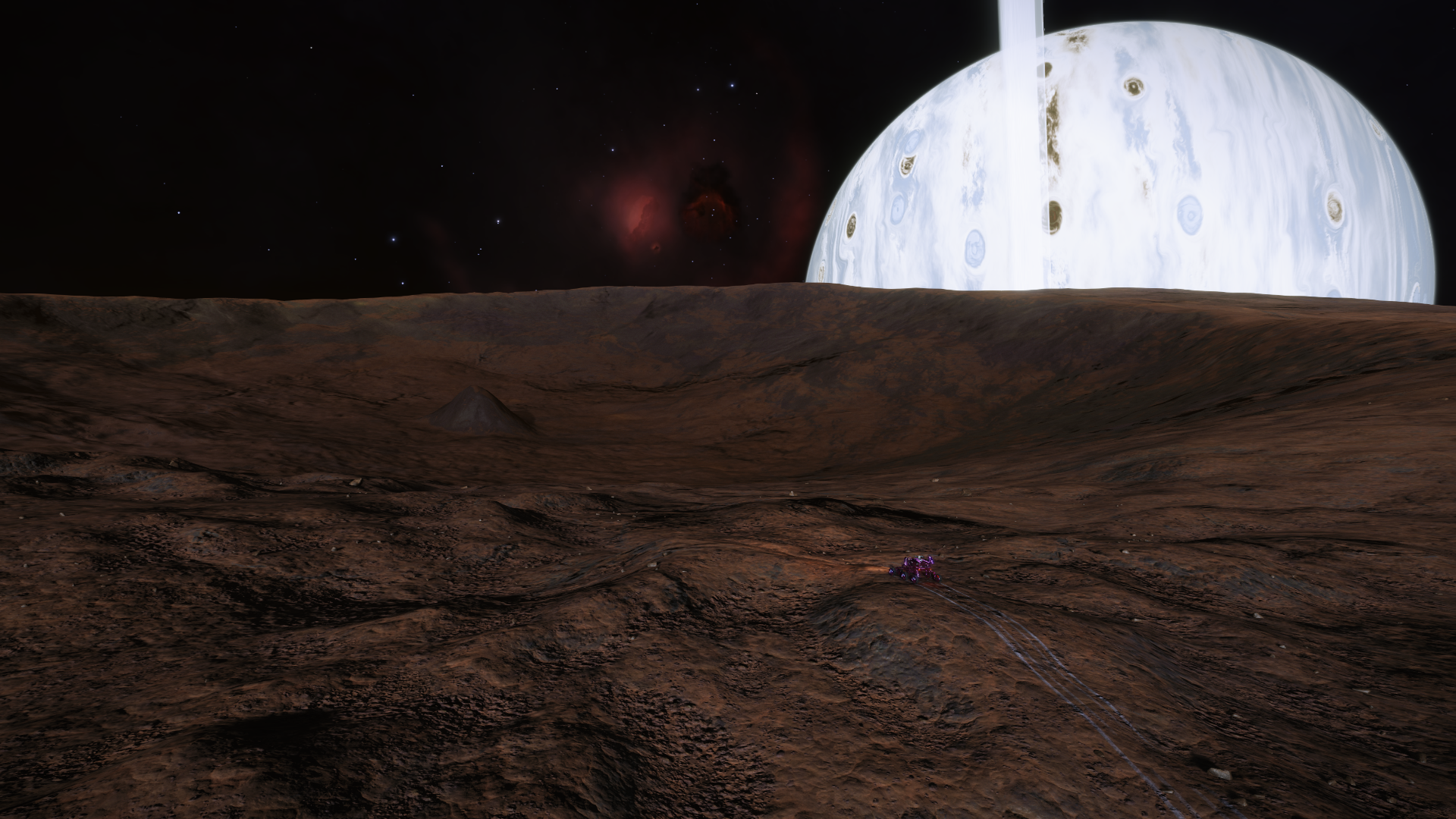 The crater is kinda cool and has a nice mound in the center which calls to me. 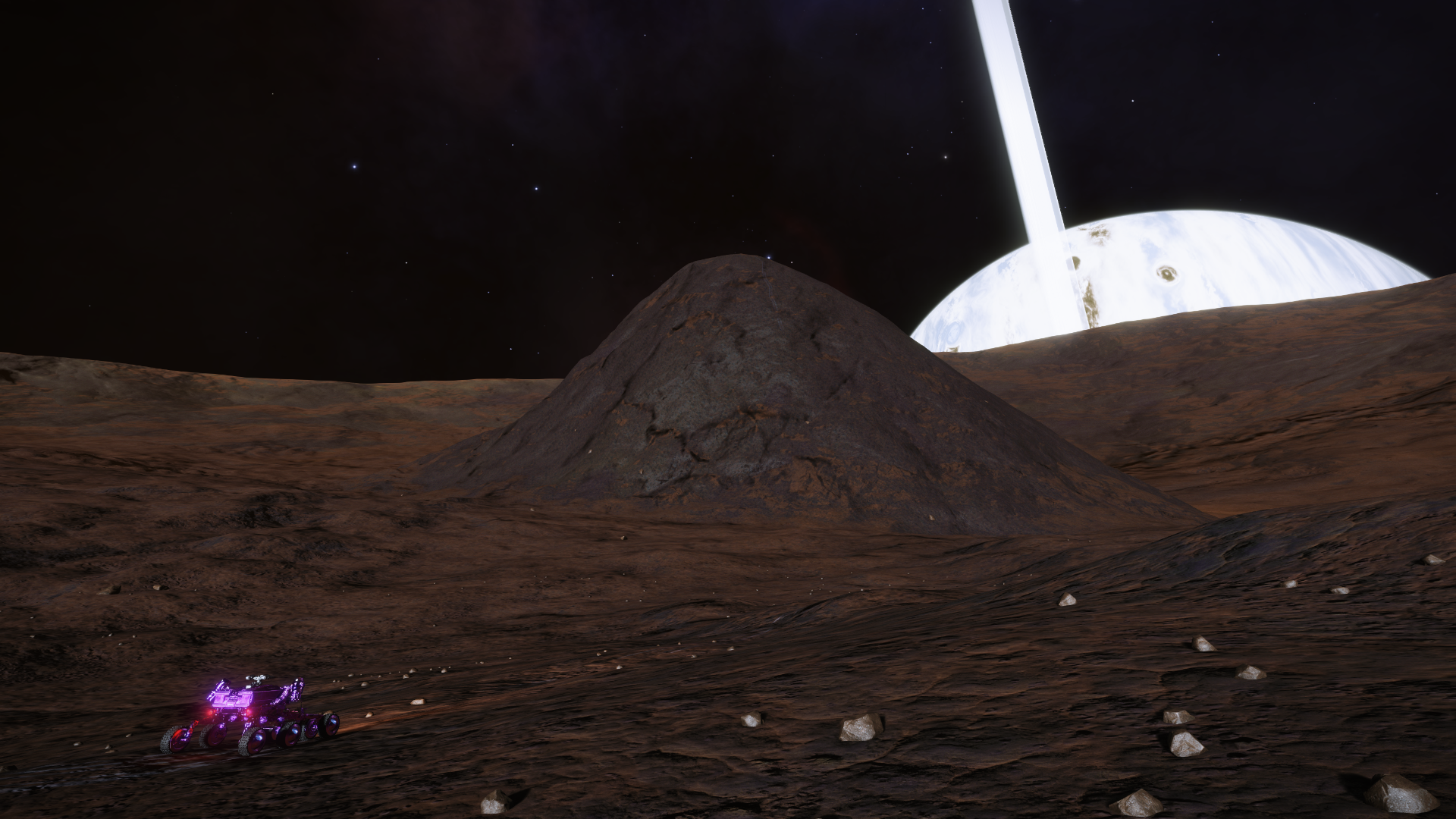 .. and before long I'm on the top with a terrific view of the local nebula and the edge of the parent ring. 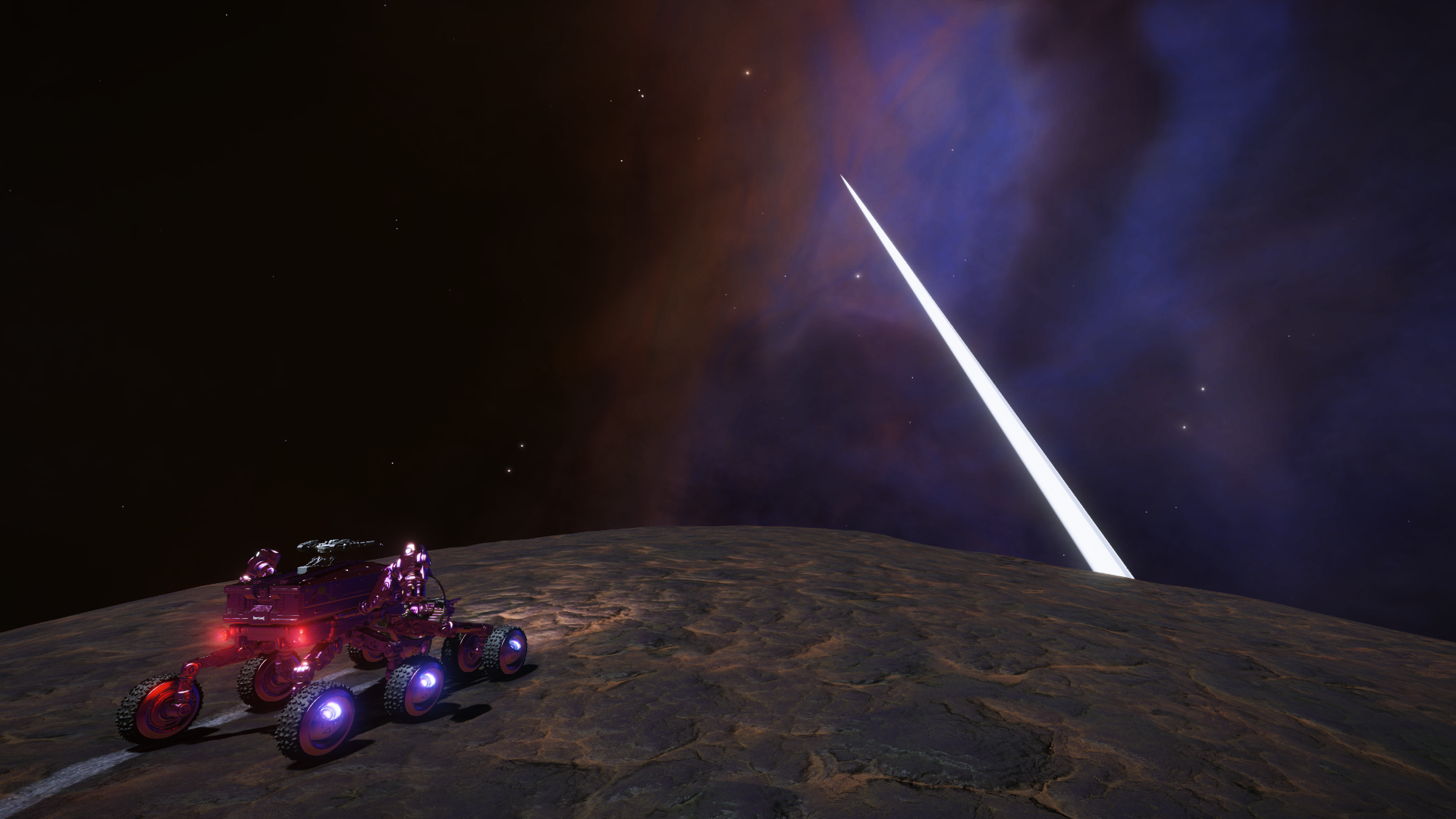 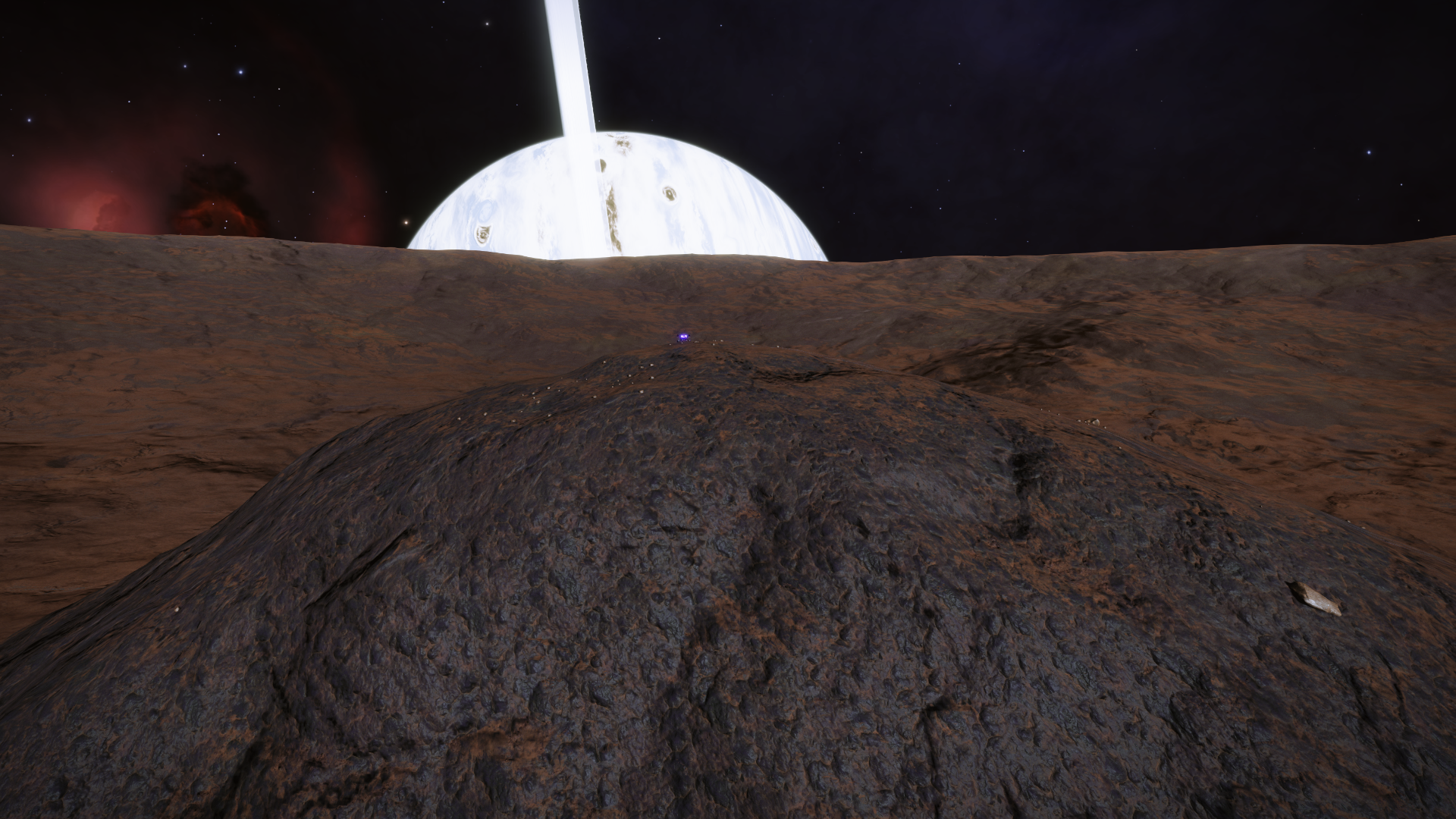 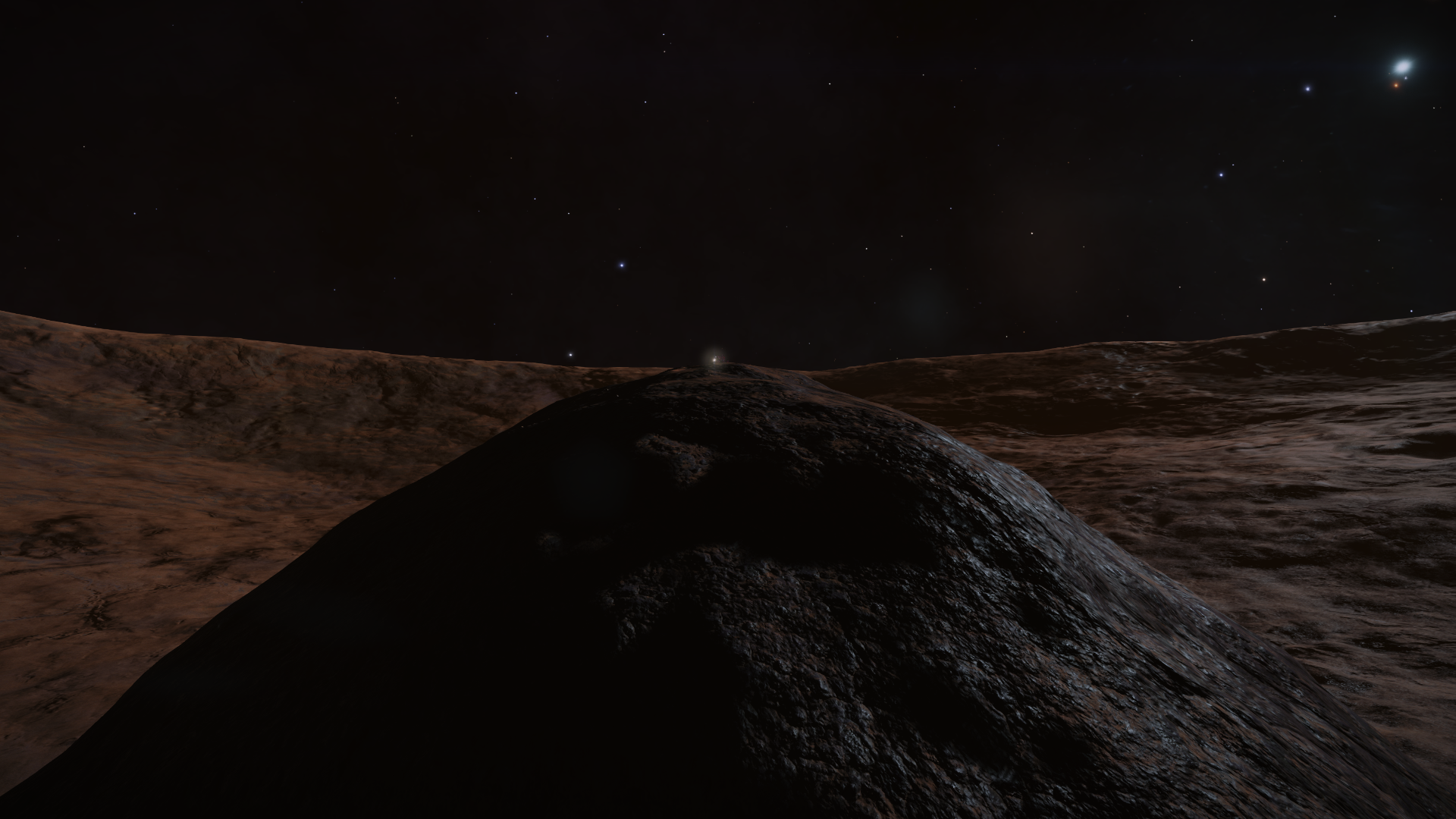 Uh oh ... is it me or is it getting dark around here? At one point while I'm gathering some resources around the mound I have a moment of surprise when I spot another SRV moving around not far from me. It's only when I look closer that I realise it's my own shadow! 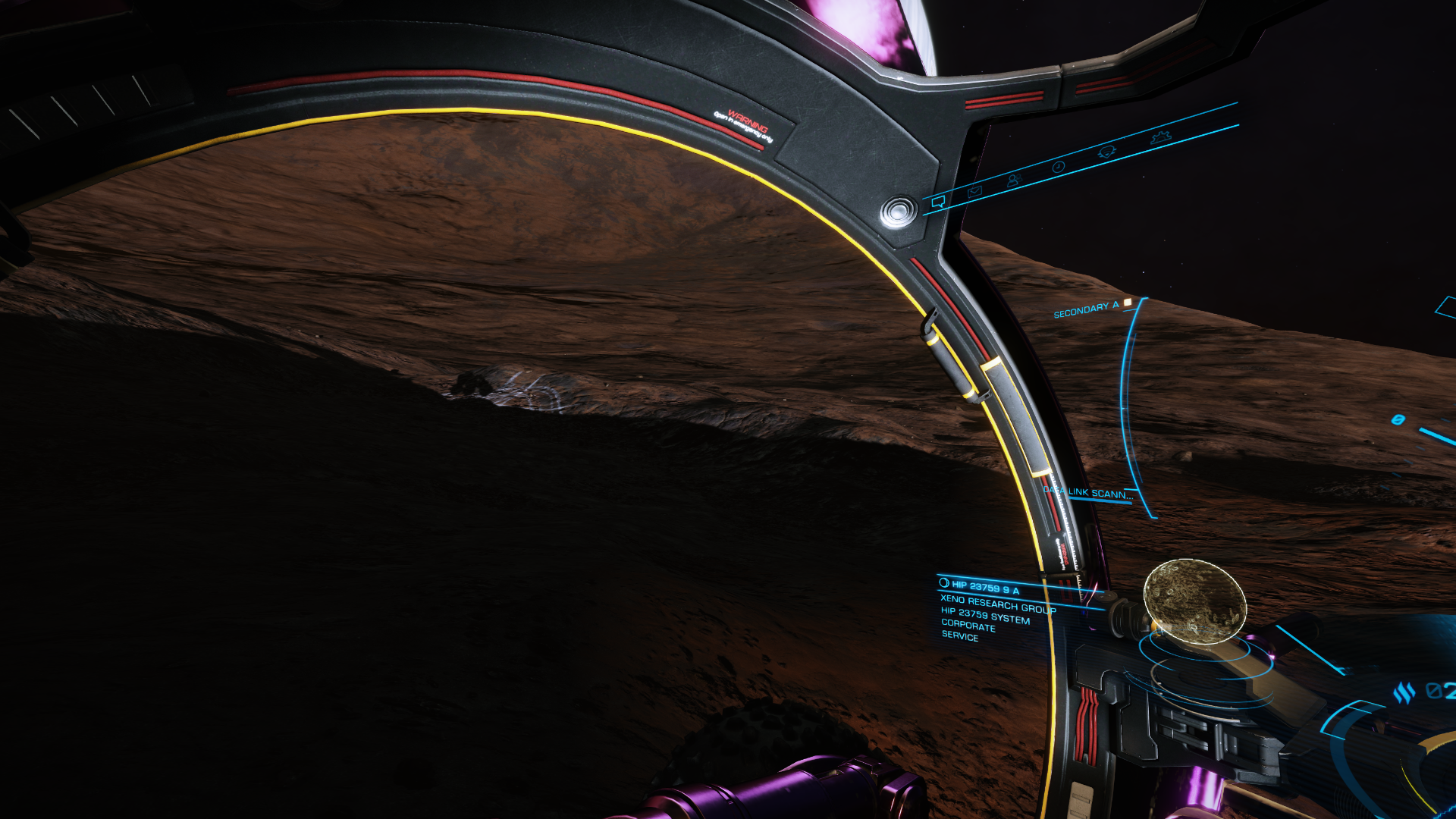 I drive up out the other side of the crater and, with one brief look back the way I came .. 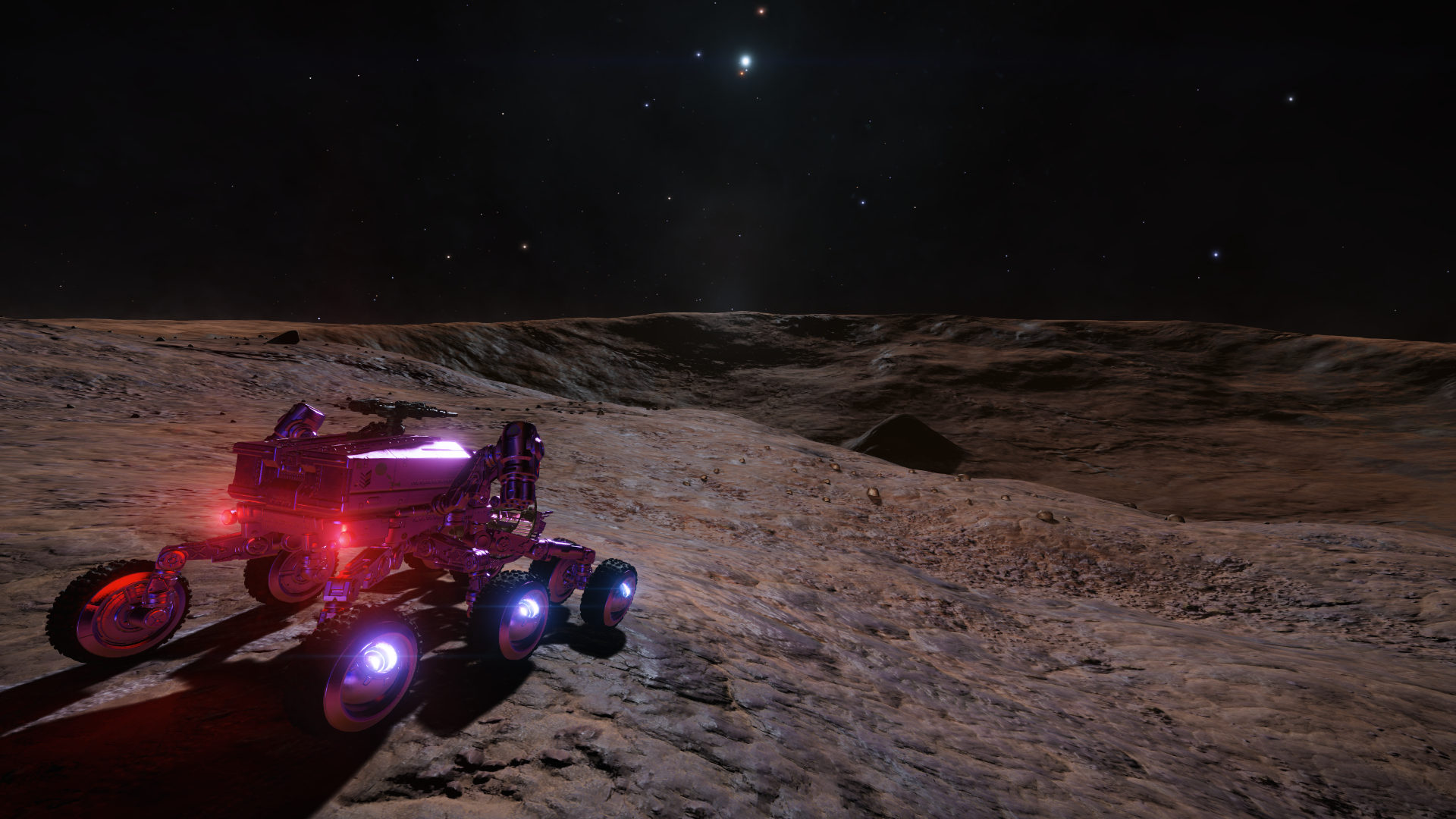 .. it's time to get moving again (I'm not doing a complete circumnavigation you understand, but I am just curious to see what lies over the horizon). 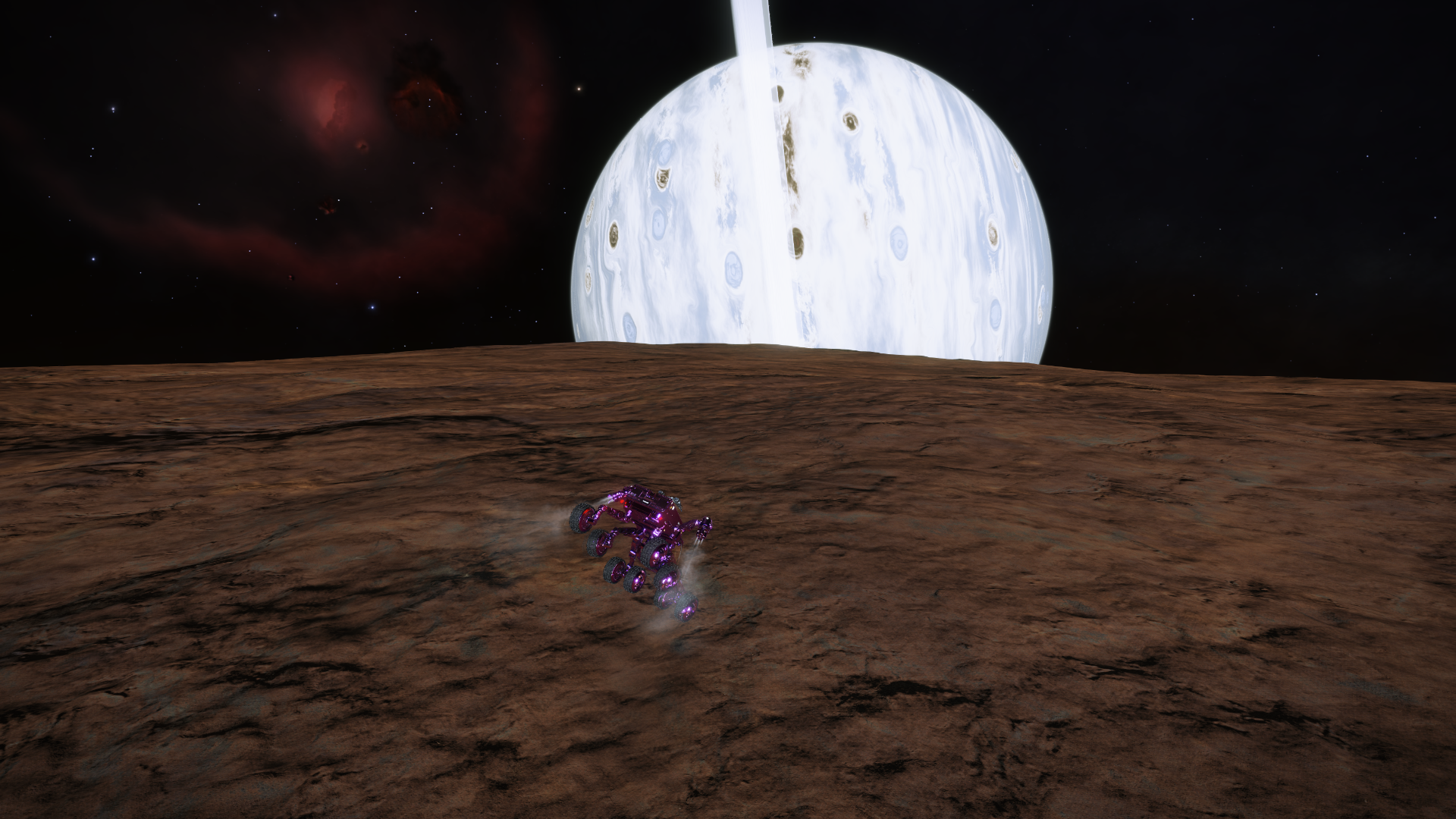 A bit further on I find a second crater of a similar size and scale its own central mound. 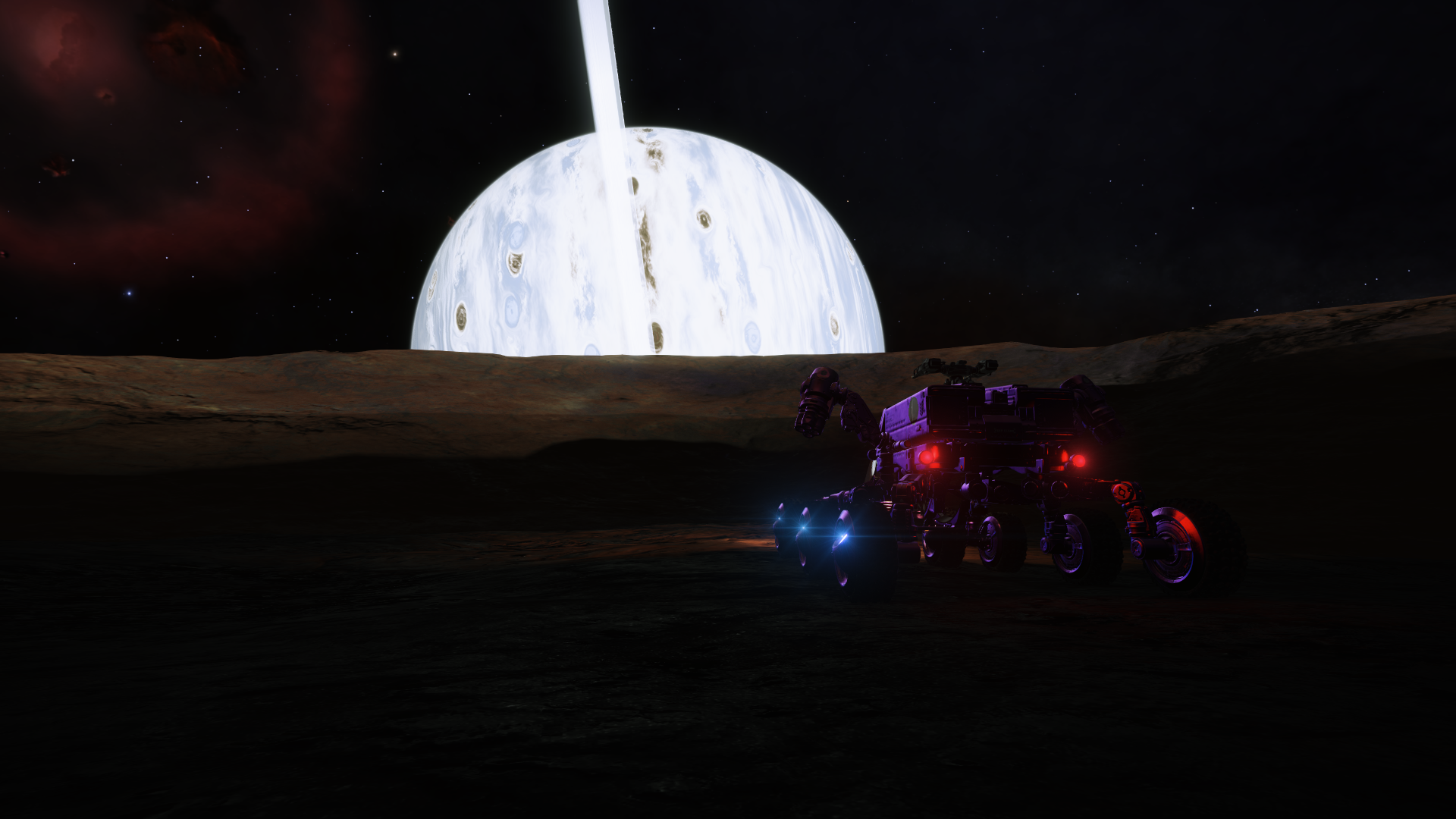 It's now very definitely getting dark and, as I climb back up and out the other side I find myself chasing the shadow's moving edge as the star begins to set behind me.


Joking aside this darkness is a concern. I'm really not that interested in spending days (weeks?) driving in the dark. Apart from anything else I won't be able to share any more lovely screenshots. What I really need now is a Guardian Key to light the way! (hint hint).

Anyway, for now I guess I'll go a bit further and see how bad it gets. I should probably check rotational periods and things and see if I can figure out how long it'll be before the "sun" comes back up again.
Last edited: Jan 3, 2020

Great read - looking forward to the next episode

Whatever you do, just don't plan on circumnavigating that planet!

Biff Stryker said:
Whatever you do, just don't plan on circumnavigating that planet!
Click to expand...