77 new entries in the public spreadsheet.

17 new entries in the public spreadsheet.
Do I need to click SHARE for you to get them?

If you're CMDR Claudius Nero 777, then your entries are there, so it's all good.

OK, here's the latest set from my ED7K Survey. First the table (hopefully this time I've fixed the image URLs so they don't turn into pictures) , then the Tourist Summaries.

Kyloall - The Red Giant in this system is at just the right distance to make most tof the worlds of the secondary star terraformable - except of course the one that doesn't need further terraforming. Being in a tourist hotspot (it's enroute to the Dryooe Prou GGG and on the main line from Colonia to Beagle Point), so it's no surprise that I'm not the first visitor. Group 1 (small) but generally pleasant.

Kyloabs - For a Group 3 (large) world, it's quite small and pleasant, though the month-and-a-half-long day might take some getting used to.

Wepae - This world orbits a distant secondary star in a Neutron Star system. Again, the high traffic along the Neutron Expressway to Beagle Point means this star was already explored. Cold, Group 1.

FG-Y - a rare ELW found in a B-class star system. As is quite common for ELWs in such systems, this ELW is a moon of a much larger lava-world HMC. Group 1, small and chilly.

MY-Z - my first ever Binary ELW star system. Planet 5 was the closer of the two as I approached, so it was scanned first. The two worlds are close enough to loom large in each other's skies. The two worlds are evenly matched twins, both in Group 3 and both slightly cooler than Earth.

XU-F - Group 2 (thick-aired), though at the smaller, not-too-thick end of the Group. Surface conditions are not so comfortable, with a three-month-long day and a high axial tilt.

TS-B - This star system is a chaotic mess, with planets (including the ELW) flying about all over the place at weird angles. The world is another Group 2, this time with a super-thick atmosphere. The chilly winters are made much worse by the near-90-degre axial tilt.

ZE-A - Group 3, and the days just keep getting longer - this one's at three and a half months.

WJ-A - Group 3. The days on this fetid jungle planet with multiple suns might seem like they never end.. that's because, at five and a half months long, they almost never do.

EK-C - Another Group 3 with a three-month-long day - this cluster of them is really messing with my averages. The only redeeming features are that it was my first ever Ringed ELW discovery, and there's a little potato-moon in a very scenic orbit.

DM-L - Group 1, this small tropical world with a perfect-match day length must seem like a paradise compared to many of the previous worlds.

GS-B - Here we have a Group 1 "desert planet" - too hot and dry for colonists to be truly happy.

ZY-A - Group 2, and here we have a new personal-best record holder for hottest desert planet. At 318 K it's nearly at the maximum for human habitability, and that 1.2% water might sound like a lot, but it's still nowhere near "humid". So it's likely another desert.

EK-I - As a Group 3 world it's a bit on the large and heavy side, but otherwise nothing too nasty.

MK-C - Another binary ELW system, my second; this time they're mis-matched, with the larger planet 7 being Group 3 and the smaller number 8 is a Group 2. Conditions on the worlds are not what you might expect: the larger, thin-aired one is a warm jungle world, while the small, thick-aired one is a dry tundra planet.

FL-P - Cool, Group 1 world.The high axial tilt is mitigated somewhat by having three suns to even out the heating.

SQ-A - On the smallish side, even for a Group 1 world. Cool.

IF-R - An unusual system, with just three stars and the ELW, no other planets or moons. The primary star is a Red Giant, the ELW orbits a matching-colour Red Dwarf in a mildly eccentric orbit. This Group 1 world easily qualifies as a Desert Planet, and up close one can see the seas on this world are small and disconnected.

And one more, after the Wepooe survey was finished...

Hypoe Pruae - at 1.59 Gs, this Group 3 world is my new record-holder for highest surface gravity. Curiously, it is not also my highest-mass ELW; I have another that's less dense, so it has more mass but less gravity. For such a large planet, it's rotating quite rapidly (a day is about 12 hours), so if you want to feel lighter, I'd suggest living on the equator.

Wow, some ELWs are unique! Nice!

Here comes this month's update, in the middle of the month. Will get back to the beginning next month. Anyway, 264 new Earth-likes this time around.

14 new entries in the public spreadsheet one space below my 17 submissions from Jul 2.
-CLAUDIUS NERO 777-

I've got something special (I think)
Here it is Marx:
A ringed ELW as a moon of a class Y star, Primary is a class A7
Does that rate well on the rare scale?

It should score pretty well (I guess it depends on your ideas about well though), already on account of being a ringed moon around a dwarf star, but there are several ways to more precisely tell. One is to simply put it in, and see the exact score Second would be to look up a similar ELW already on the list, and see its score. Third would be to calculate it on your own: the required information is all there.

OK, here's my next batch, from straight-lining back towards the Bubble:

Hypiae Aoc TS-U d2-2874 : This world was the reason why I took the eastwards detour from Sag A out this way: it's one of the known-to-EDSM ELW Trojans not yet added to the List. And it's a very close match to the Byoomiao one reported earlier: with four landable moons as well as rings. I'm wondering if Trojanity makes it more likely to have multiple moons, as if the Stellar Forge is condensing a bunch of objects into the Trojan point. The world itself is a cold Group 3 (large), as one might expect for a planet with so much junk in orbit. 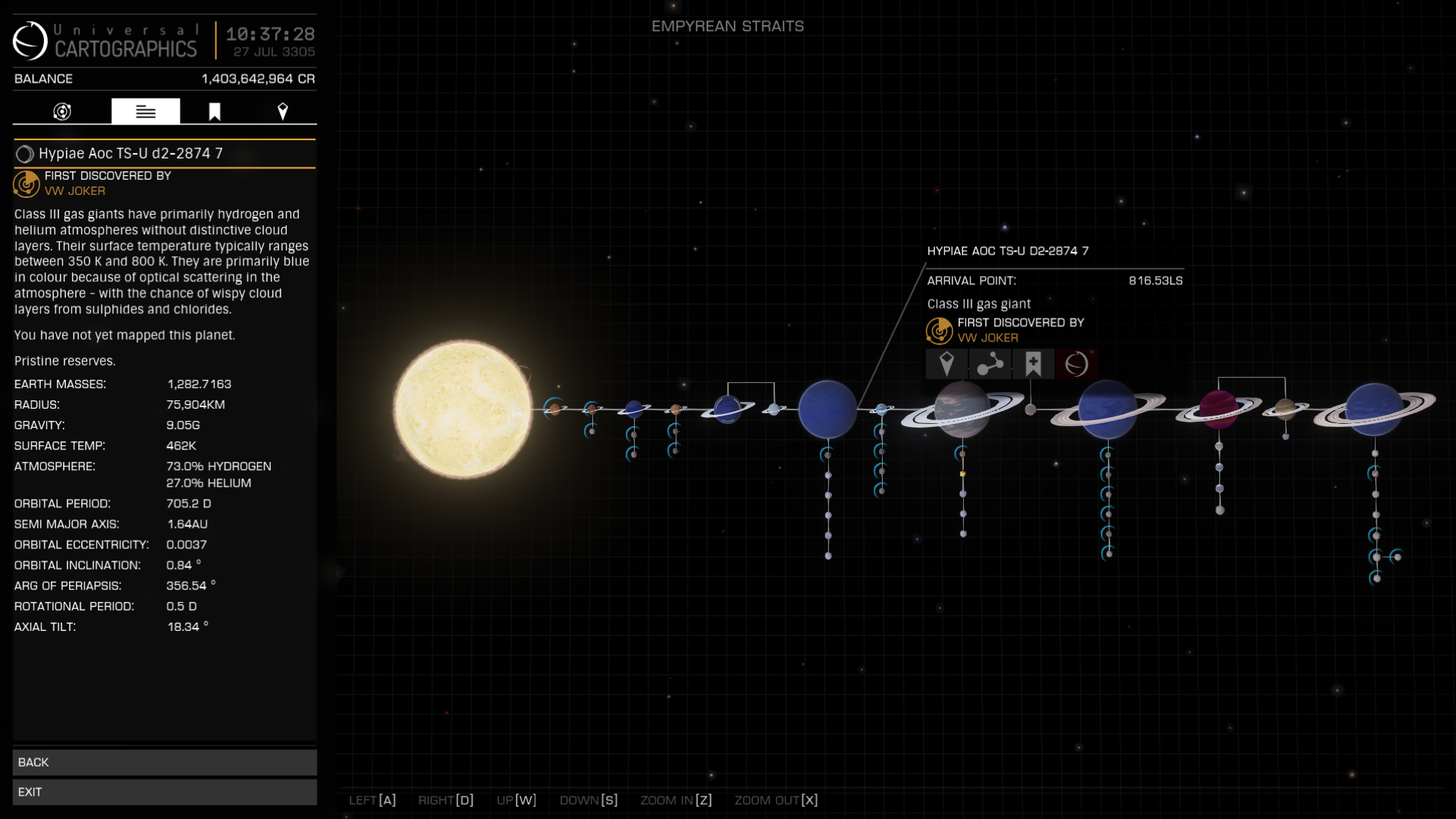 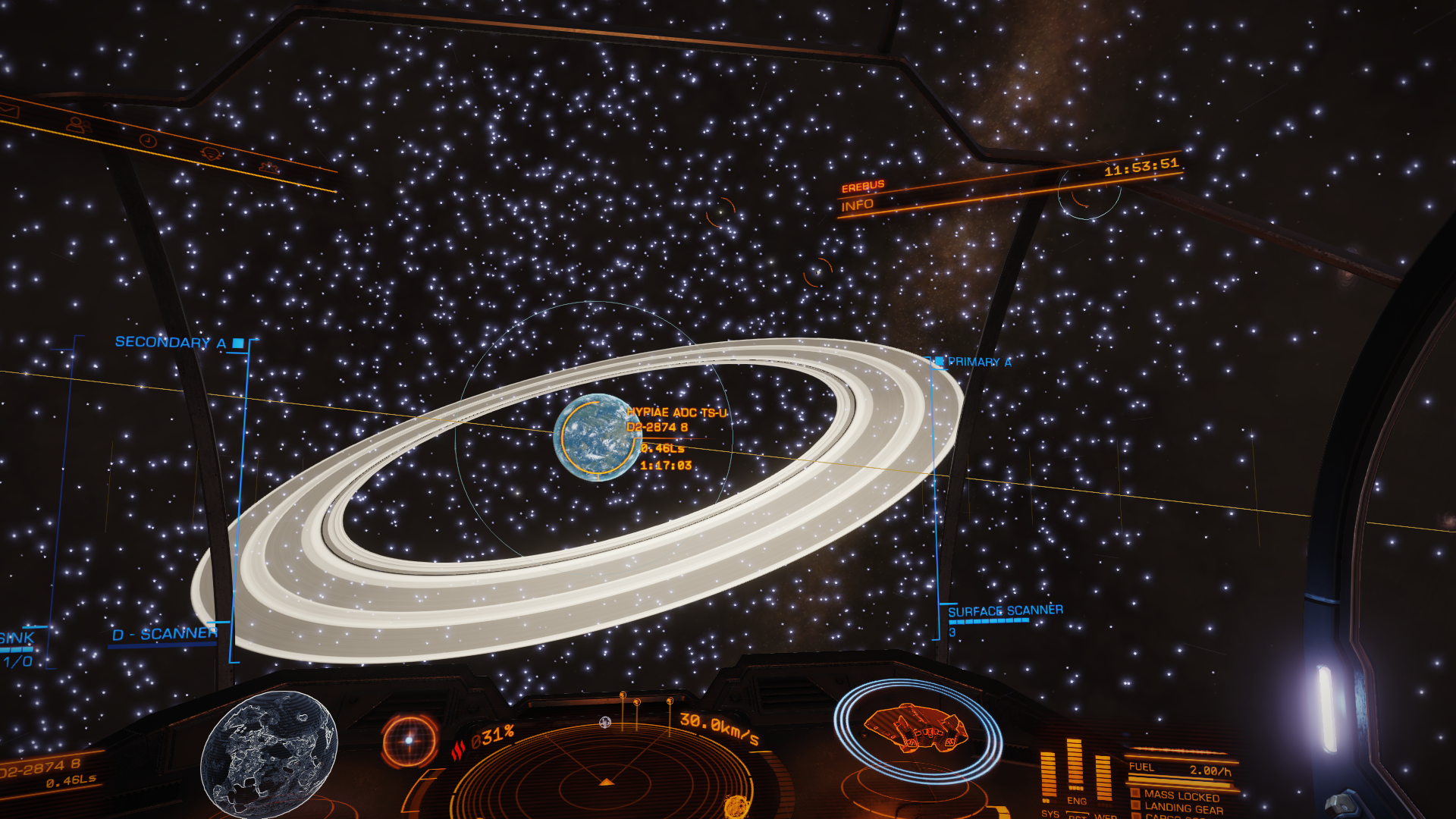 Here's the view from the innermost moon: 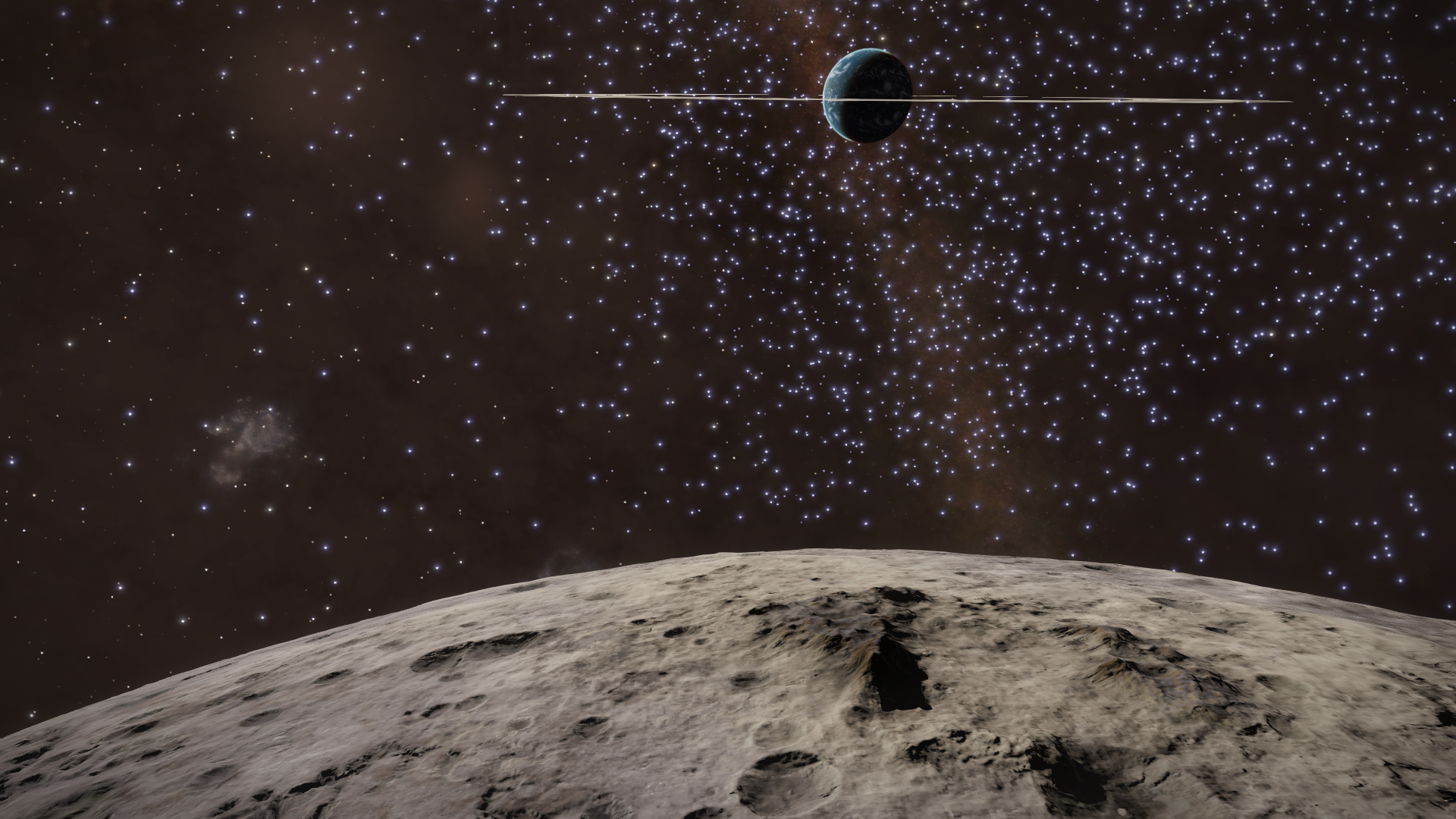 Eor Auscs UT-R d4-1164 : A cold Group 1 tundra planet. There are unmapped terraformables around the secondary star 34,000 Ls away.

Dryi Aoc ZO-A d2443 : An uncomfortable little Group 1 world with an axial tilt at a nearly-perfect 90 degree angle. I caught it in springtime so the planet "looked normal", but the Earth-year-long summer must be a scorcher, everywhere except on the equator. And, since it has a moon, here's a planet-from-moon shot: 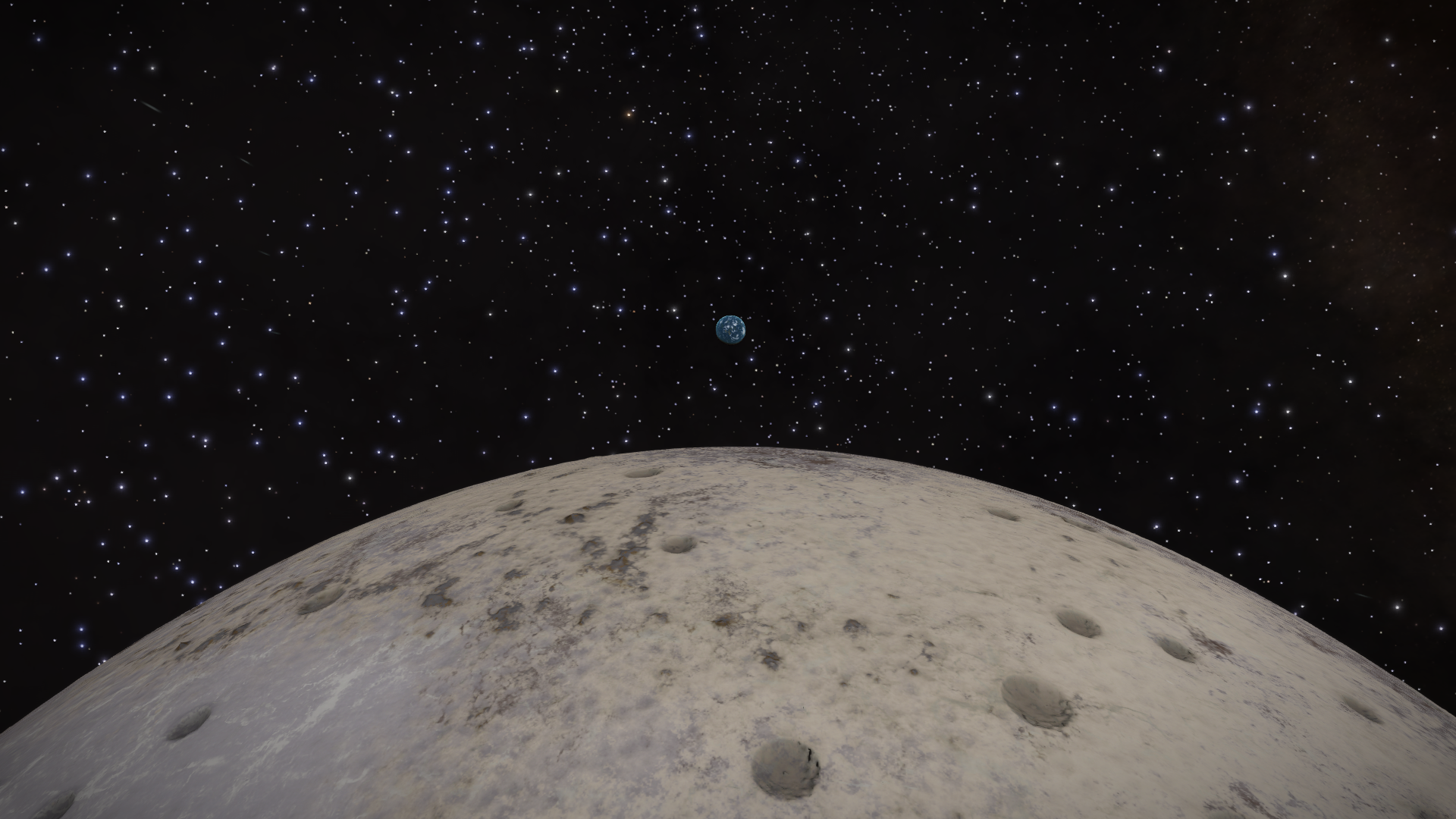 Blua Phio FK-C d14-4829 : This chilly little moon (being a moon, it is naturally Group 1) orbits around a large HMC that only just qualifies as terraformable: the surface gravity is 1.97 G. The giant planet looms large in the moon's sky, while the tiny moon is barely visible from the planet. The normal-looking axial tilt is belied by the high orbital inclination: in the pic below, the pole is at the top, in full sunlight. There are four other terraformables in the system: two of the neighbouring trinary worlds and the binary around the secondary star, making this system quite valuable (I got over 7 million credits for it, and didn't map the other four terraformables). 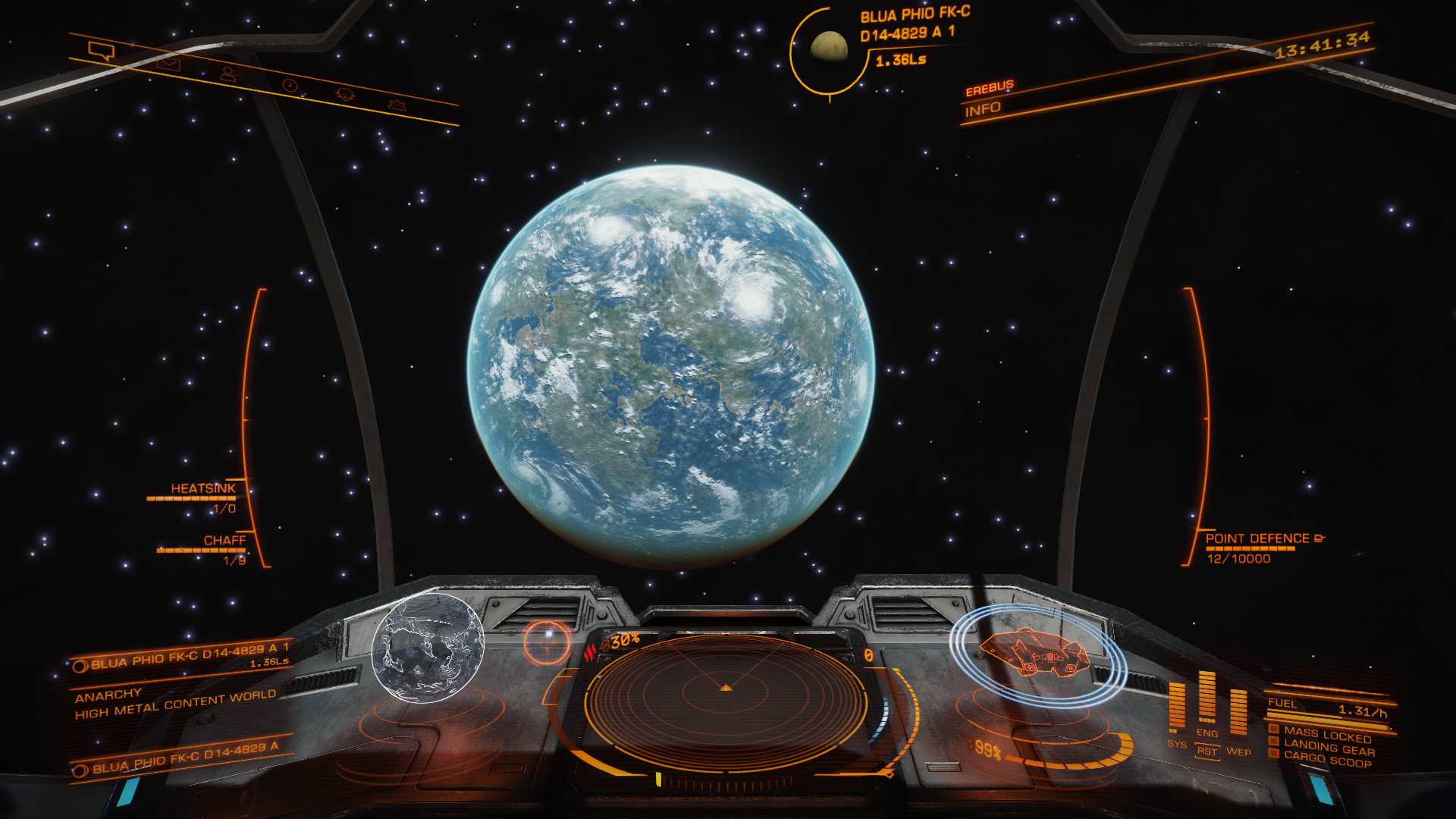 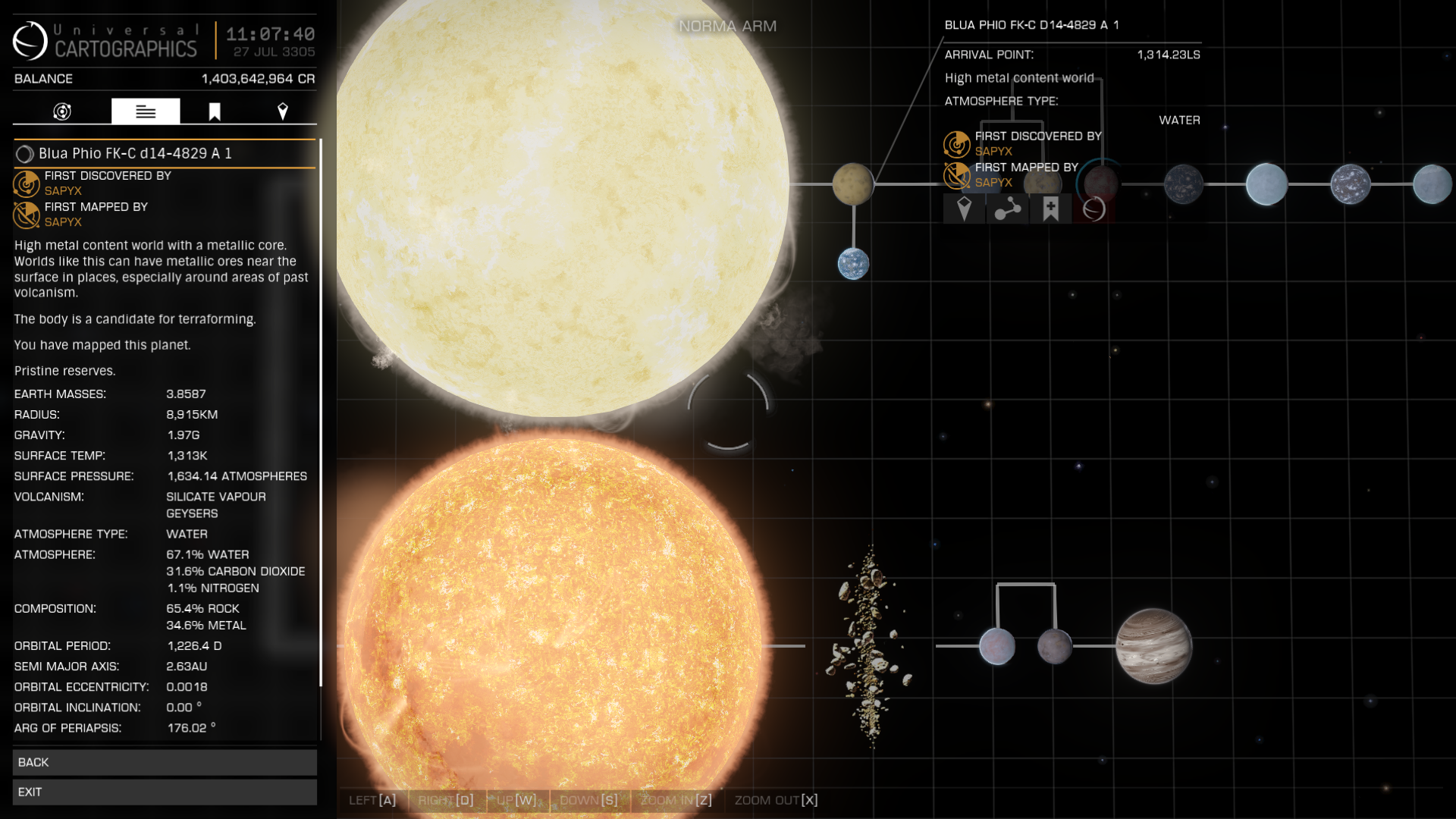 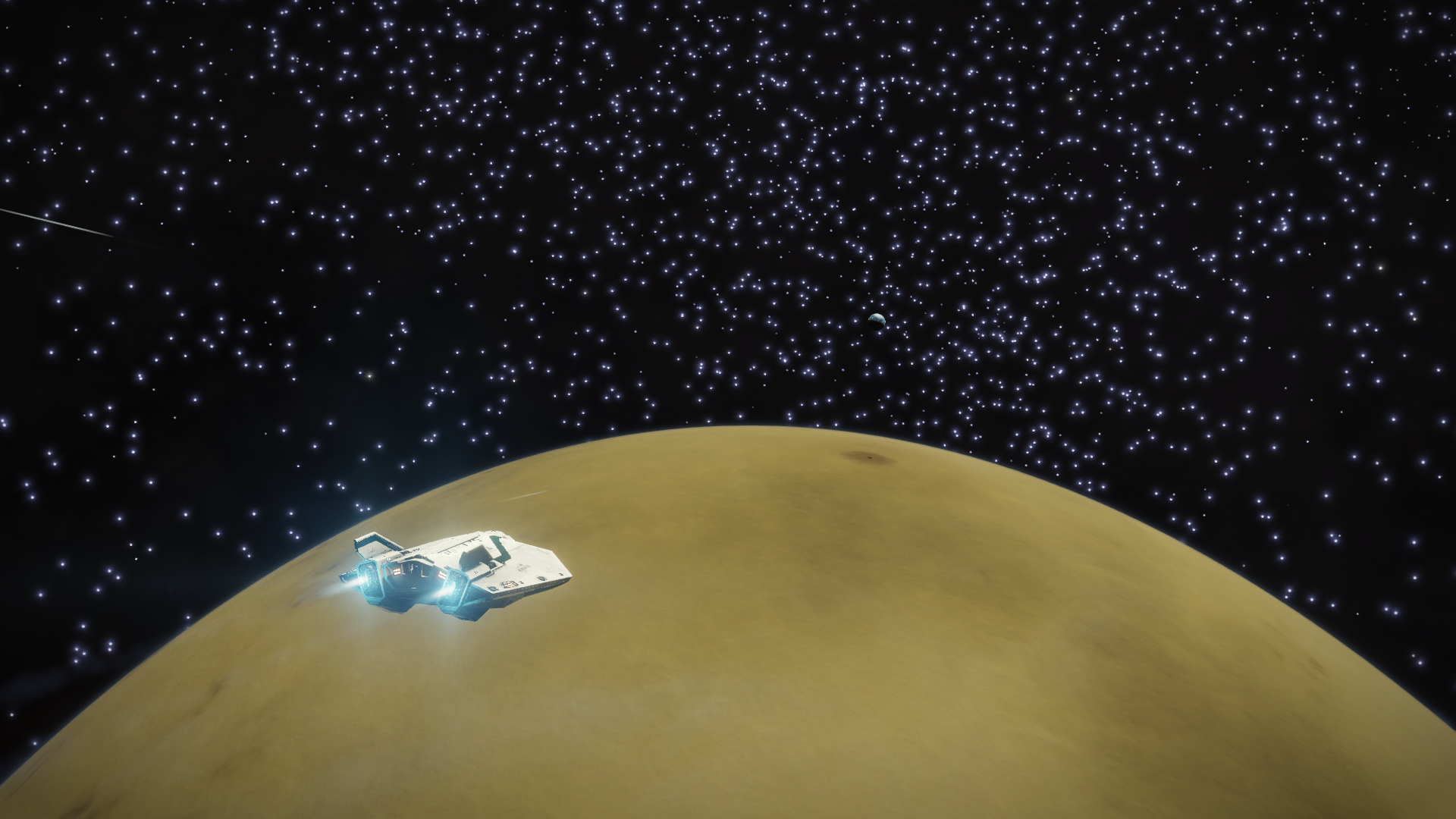 Floawns XO-X d2-1295 : Do not confuse this planet with the very similarly named planet Floawns XO-X d2-1255, which is already in the database. This planet is much more interesting, and was another one of my must-see destinations on this trip, given my obsession with trying to find a "perfect match" for Earth. This planet came out of the EDSM data dump with six out of eight parameters (mass, gravity, temperature, volcanism, day-length and presence-of-a-Moon-like-object) matching: only the super-thick atmosphere which Group 2 planets are afflicted with, plus the low axial tilt, negate its extreme Earth-like-ness. It is even in the "third rock" position around its sun (though this isn't an essential paramter). The "Moon-like-object" in question is actually a co-orbiting terraformable HMC, but it orbits at a distance which makes it appear the same size as the system's sun, so it "counts" in my list. Sadly, it doesn't "look" very much like Earth, appearing cobalt-blue due to the thick atmosphere and the actinic glare of its A6 sun. 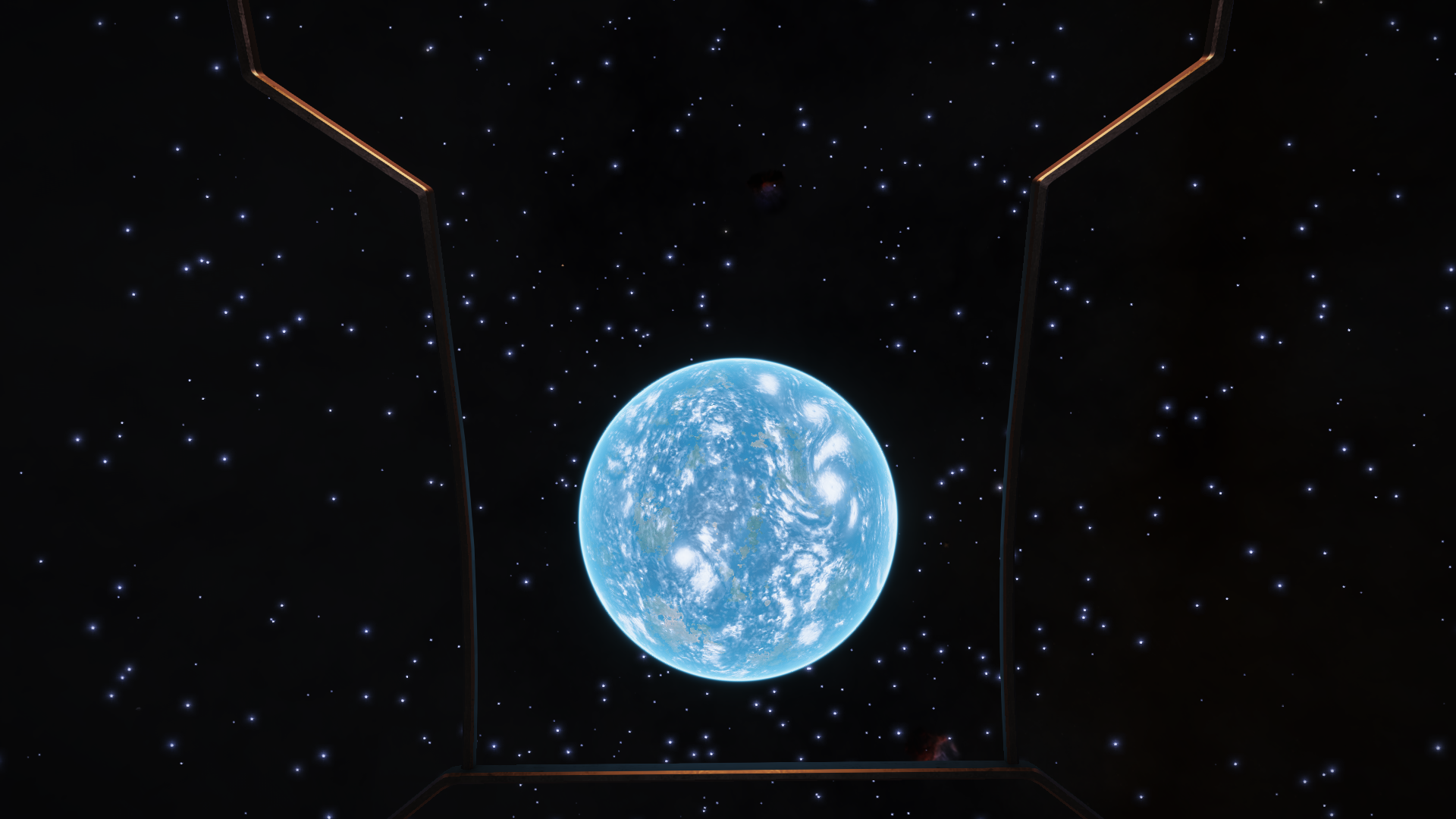 I then went on a 160-jump neutron-assisted trip from there to the starport in the Eagle Nebula, without seeing another ELW. Oh well, them's the dice-rolls.
Last edited: Jul 27, 2019

a couple of screens of my little gem 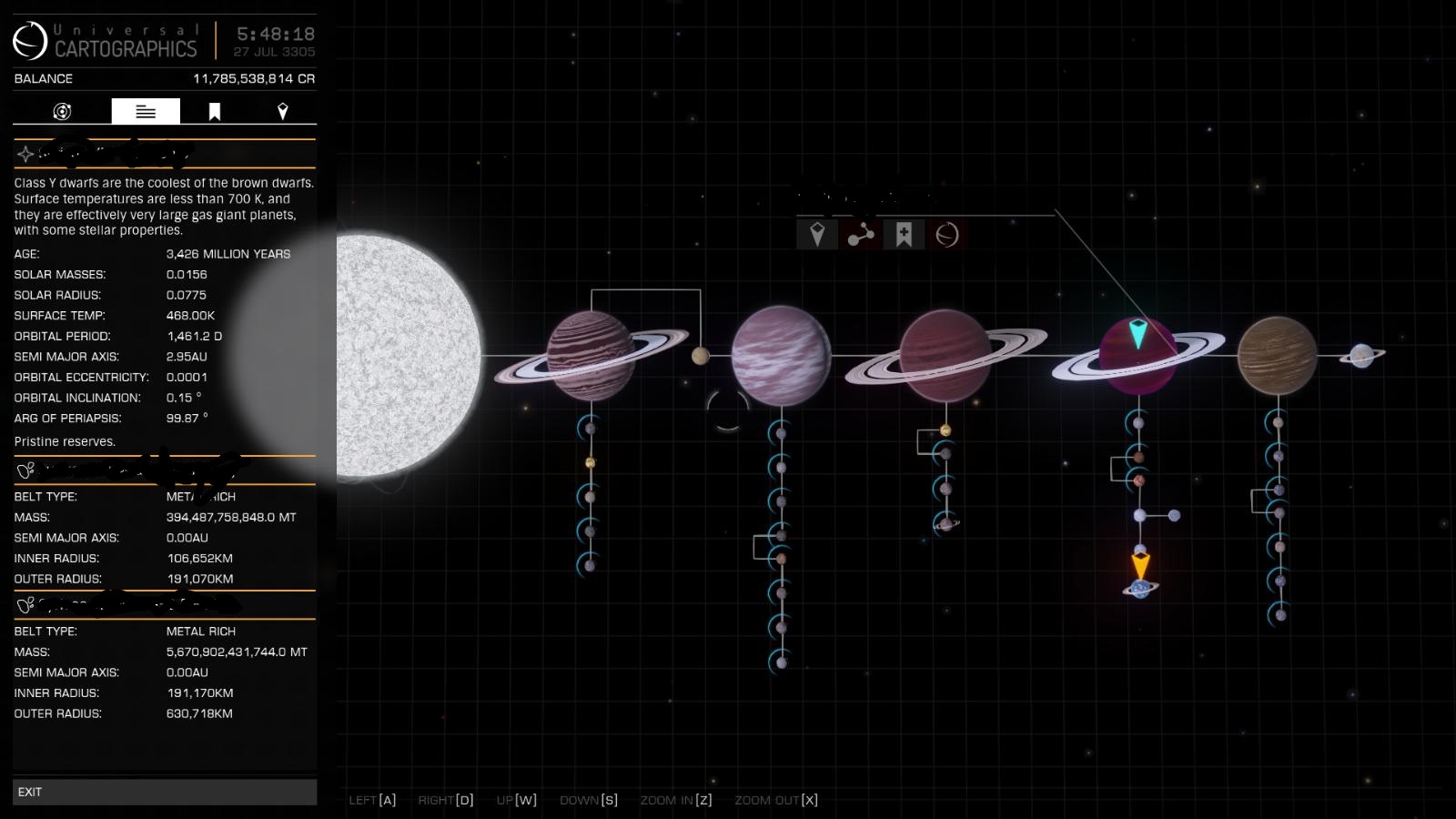 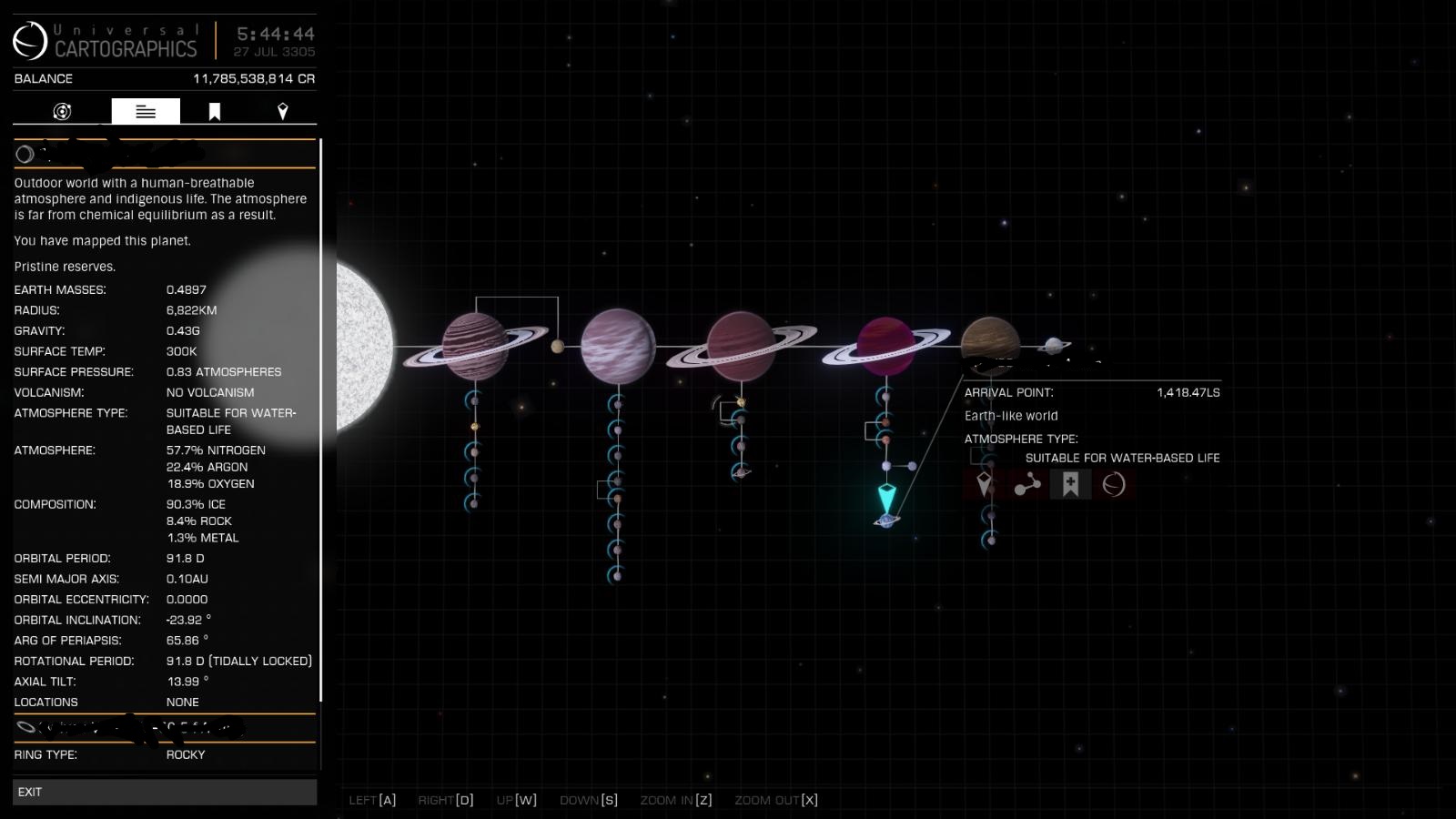 osser said:
a couple of screens of my little gem

OK, another small list from me. First the list, then some tourism notes in a follow-up post (bcause I always make typos when I do tourism notes, and editing the post to correct the typos destroys the table formatting).

Nyeajeau AA-Z d17 : I had this planet down as a waypoint as my initial analysis of EDSM data showed this world might be a good Earth-matching candidate. Alas, only four parameters match, so it's not that great, though by far the least unpleasant planet out of this group of five. Group 2, just a bit cooler than Earth. No moon, though. Note that the discoverer's name here is "Phoneix", as in "phone 9", not "Phoenix".

Blae Drye KO-F d12-39 : I was in the Blae Drye area investigating my potential UY Scuti sacrificial candidate system, and I'm glad I made the detour as I found two Untagged ELWs nearby. This one is an inhospitable, cold, damp Group 3 world in orbit around a secondary star 450,000 Ls away from the arrival point.Not a good place for a colony.

Blae Drye RO-O d7-51 : The second one in the sector is inhospitable, but at the other end of the scales: a small, hot Group 1 desert planet.

M20 Sector WZ-P c5-16 : It's perhaps not surprising that the M20 Sector is quite thoroughly explored, even though it's not a "spectacular nebula" sector. Cmdr Featherlight beat me to this one. At 318 K, this humid Group 3 jungle planet almost doesn't qualify as "Earth-like".

Bleia Eohn ZF-L d9-51 : This planet was another targetted waypoint: yep, it's another Trojan ELW from Orvidius' list. And it continues the pattern seen earlier in having lots of junk in orbit: in this case, rings and two potato-moons. It also continues the pattern from the previous ELW Trojan in having a very short day (12 hours). The planet itself is a cool, damp Group 3 member. 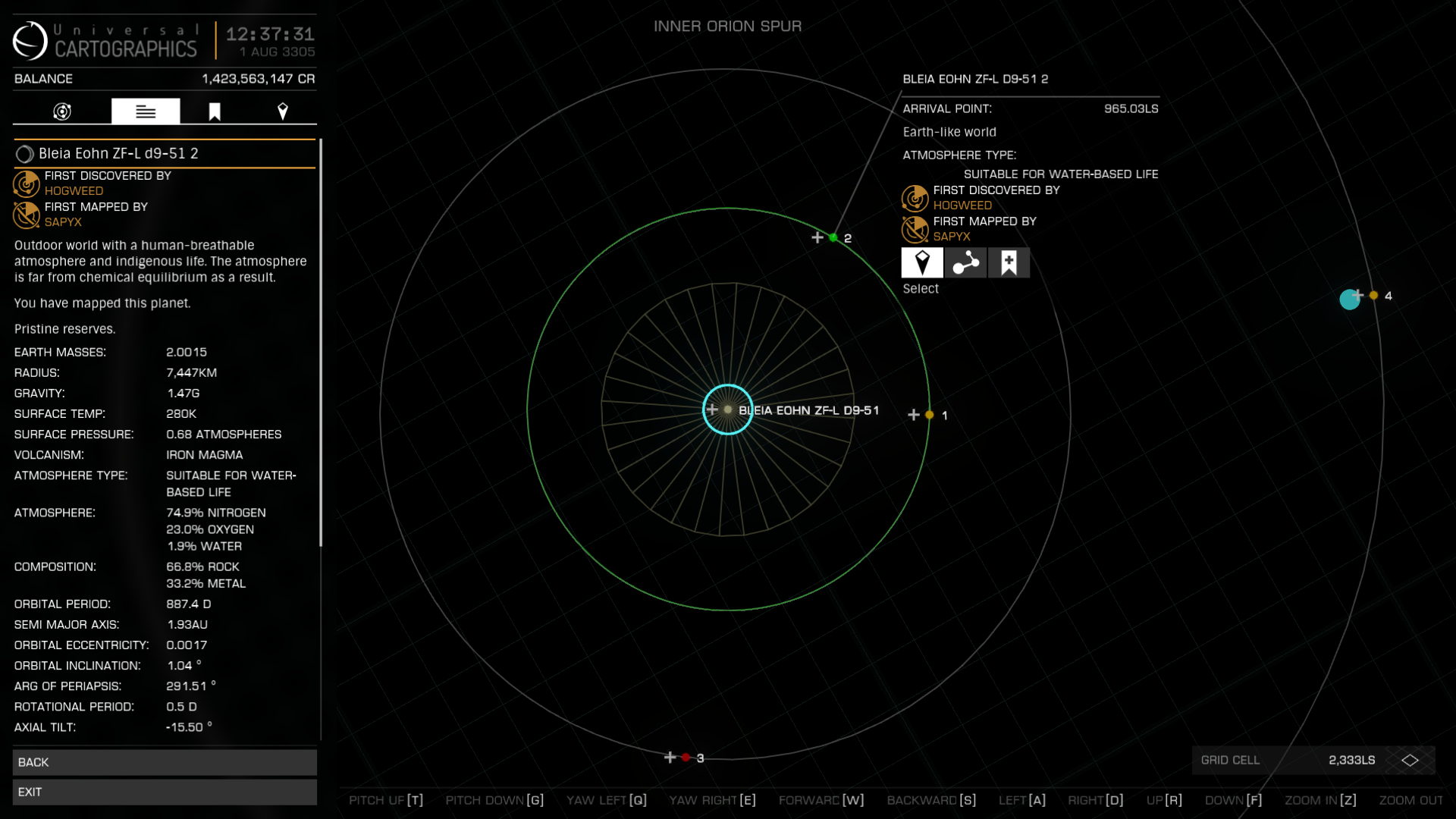 I'm now at that new outpost in Guardian space, on my way "past" the Bubble to check out that "terraformable ELW" anomaly. I'm suspecting it's an error in EDSM, as Orvidius' post has been up for over a month and there's still no report about a "terrafomable ELW" in the Codex for that region.

New entries in the public spreadsheet. It's been a slow month, so only 14 this time around.

Here comes this month's update... well, half-month's, so only 71 ELWs.
Congrats to Agatosh for taking the #3 spot on total counts!
Also, we have a new rarity score record, VW Joker's Hypiae Aoc TS-U d2-2874, what with it being a ringed trojan ELW with four landable moons. However, I don't think it'll stay at the top once more trojans are added.
You must log in or register to reply here.
Share:
Facebook Twitter Reddit WhatsApp Email Link
Top Bottom