That's the day that a new game called RollerCoaster Tycoon was released - a construction and management simulation video game that simulated amusement park management. Developed by Chris Sawyer Productions and published by Hasbro Interactive, the game was released for Windows computers.

That was the beginning.

Hard to believe that 20 years has now passed since then...

Several similar games such as Theme Park Studio attempted to build on the success of the originals, but it wasn't until the release of Frontier's Planet Coaster that we had what many people consider a true spiritual successor to the original three games.

Some of us in the community have been around almost since the beginning, while others of the community are more recent in taking up the games. Some of us have played all three of the main RCT versions, others have played one or two, some have never experienced them. But however many versions people have played, or the differences in how they play (park building, coaster building, scenario play...), there's always seemed one over-riding theme that united all these different people who's made up this large community over the past two decades...and that is a true love of this type of game.

While the spiritual successor of the original series certainly seems to now carry a different name (thanks Frontier!), here's to RollerCoaster Tycoon and it's successors...may the future of this wonderful game genre be bright and the community that shares it enjoy yet another 20 years!

Thank you for the reminder . Back then I never would have thought that there would be a game that I would play for 20 years. To me it’s timeless, just like Planet Coaster. Many more years to come!

Thanks for the heads up, Wagi! I still have the old boxes of RollerCoaster Tycoon and the expansion pack bundle Loopy Landscapes and Corkscrew Follies!
Let's see if I can find them so that I can post a picture here

I doubt I have the boxes but I do still have the discs...multiple sets because I'd usually buy them in the States and then again when I was in Brazil, but I ended up with all of them here, only difference really is the language!

I didn't get on board until the launch of RCT3, but then I never looked back. Frontier have given me so much joy over the years between that and Planet Coaster. And as you said, an amazing community has grown around these games.
And Wagi, you have always been there as long as I remember as a pillar of the virtual coaster community.
Bring on the next 20 years. 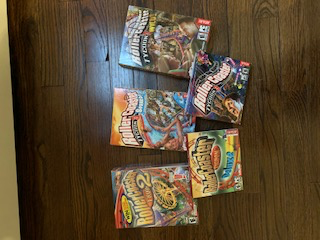 Nemmie said:
And Wagi, you have always been there as long as I remember as a pillar of the virtual coaster community.
Click to expand...

Such lovely memories of all these games. Theme park was the one that started me off. I still have rct2 and 3 with the boxes

This is actually fitting, since RollerCoaster Tycoon was actually the first ever PC game I have played in my life, back in 2001 or so.

T3rminus said:
This is my first post here, guys!

This is actually fitting, since RollerCoaster Tycoon was actually the first ever PC game I have played in my life, back in 2001 or so.
Click to expand...