Now that I have returned from my previous exteneded discovery mission of reaching new high points above the galactic plane, detailed here, my material resource stores are running a bit lower than I am comfortable with. That mission, while largely successful, used and exhorbident amount of resources. From the number of FSD injections, to damage repair due to the neutron boosts, and the unexpected engineering of a whole new ship, I need to restock.

On my way back to submit my findings to Universal Cartographics for analysis, I managed to locate a couple of unregistered stellar remnant nebulas that I marked for more detailed exploration, with the hope and intent of finding a mineral laden planet to replenish my stock. At the same time, doing an extensive survey of the planet by making a complete circumnavigation could be valuable in both research and pleasure.

My essential criteria for candidate bodies are that it must be within a nebula that I have personally tagged for Universal Cartographics. Tt has to have surface materials to sustain my SRV. It needs a circumference less than 5,000 km, so radius under about 800 km. Beyond that, aesthetics are what I am after. Planetary rings, engaging surface features and colors, having active volcanism would all be very nice. Given that set of criteria, I have narrowed my list of candidate bodies down to two.

The first candidate body is in the Phrae Flyou JN-S e4-382 nebula. It has a radius of 651km, .07g, has Major Silicate Vapour Geysers, orbits a ringed brown dwarf star, has all the materials for fuel and repair, along with several other materials useful for synthesis.

The other candidate body is in the Choomeou AL-X e1-115 nebula. It has a radius of 531 km, .06g, has Major Silicate Vapour Geysers, orbits a ringed gas giant, and has all materials for fuel and repair.

As this is my personal log, and not an official research proposal, I suppose I can be honest and say that while the official practical reason for finding a planet and driving all the way around it is for finding materials, some deeply important survey, and scientific research, but the real reason is...because I want to, and I can! For science of course

Both seem similar, but good canditates.

Escellent! Another planetary circumnavigation to follow. Good luck and I really hope you have a grand adventure.

Any estimate on how long you expect this to take?

P.S. I'll create an entry for you in the OP of The-Planetary-Circumnavigation-Club forum thread.

Alec Turner said:
Escellent! Another planetary circumnavigation to follow. Good luck and I really hope you have a grand adventure.

Any estimate on how long you expect this to take?

P.S. I'll create an entry for you in the OP of The-Planetary-Circumnavigation-Club forum thread.
Click to expand...

Thanks! Right now, I am leaning towards Phyae Flyou, such would be right about 4.1 million meters as the crow flies, so at a leisurely pace of 20 m/s, that is about 57 hours driving. I figure at least a 30% increase above that for shiny things, so maybe around 75 hours driving. With my normal gaming schedule, it'll be about a month or so. I plan on taking a leisurely pace, because if I'm going to be doing that much driving, I want to enjoy it and take in everything I can. I already have a possible detour from the main route in mind

Have a great journey!

btw how far is the system from Sol?

Kris said:
btw how far is the system from Sol?
Click to expand...

So it might be a bit of a hike for some people. It would be pretty cool if anyone wanted to drop by for a bit. I'm going to be here for a while. I plan on running in Solo, but can always pop into Fleetcomm or Mobius for a meetup. Just be forewarned that I don't do voice comms, so it might be a bit boring in that regard.

Eeek! I might have to journey with you in spirit only!

I might swing by eventually, depending on may factors, but I can't promise anything. I'm sitting on the Gnosis right now, waiting to see if we all get destroyed by Thargoids in the Cone Sector. After that, heading coreward might be appealing again. I've been spending the last two months between the bubble and the south rim.

Alec Turner said:
Eeek! I might have to journey with you in spirit only!
Click to expand...

I figured not many are going to be out my way

That's the thing about my personal exploration philosophy. I tend to try and go places where no one has been before. I generally won't even scan a body that has another commanders tag on it. Makes it a bit more difficult for others to find me

I have touched down on Phrae Flyou JN-S e4-382 2 g a thus confirming it as the body I am going to circumnavigate. It will still be several hours before I disembark the Buckeye II, as I am working on the final preparations and navigational calculations for an extended stay on the surface. I wanted to touch down as close to the north pole as possible, but as you can see, the terrain is a bit rough

So I had to choose a spot that was around half a degree off the pole.

R
That's a pretty cool-running build you've got there. How is she outfitted, if you don't mind me asking?

Rustnsawdust said:
That's a pretty cool-running build you've got there. How is she outfitted, if you don't mind me asking?
Click to expand...

I suppose I should have posted that huh?

Here is the Coriolis build

Right now on the surface, I have everything shut down except for life support. When I am under normal deep space running, my temp is around 17. I made this build when 3.0 engineer revamp dropped, and retired my first Asp X, Buckeye. Aside from the new blueprints, Buckeye II has a g5 light weight heat sink lanucher. Before this ship, I had never fitted one. It makes less than .1 ly range difference, so I figured why not, especially since I have full systhesis mats for it. Interestingly enough, I actually used it on my way to this nebula when I was dropped in between two F class stars, and my heat shot to 95% before I even had a chance to fire it off. Never needed one before that. Made me jump right good and proper

straha20 said:
I was dropped in between two F class stars... Made me jump right good and proper
Click to expand...

Yeah, some arrivals will make you sit up straight. I haven't had a really hot one yet, but a few that made me rather wide-eyed!

Thanks for the build, and good luck with the long drive [up]

S
Packing it in for the night. Made some decent progress, but it was slow going at times. It took me a bit to get efficient with the navigation aids because while I have spent a lot of time in my SRV, I had never really had a specific route or destination or anything. 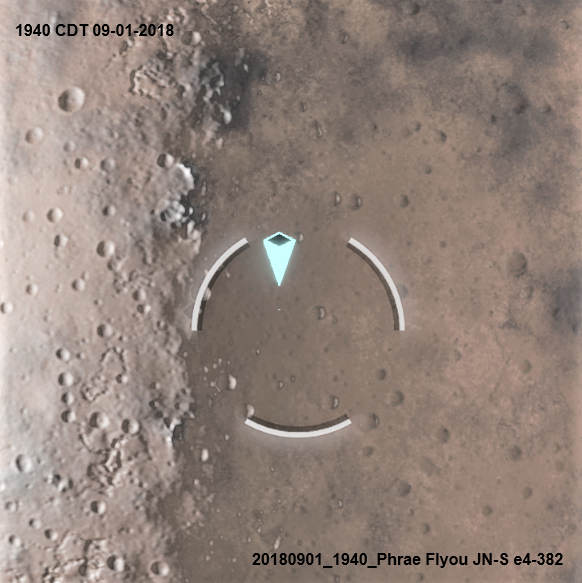 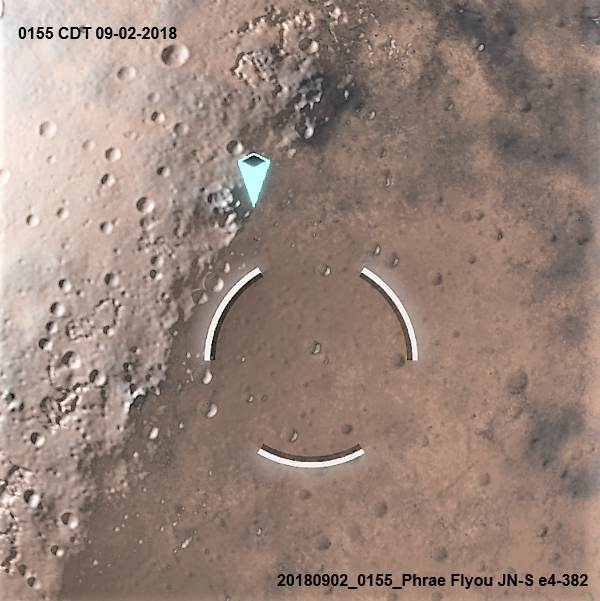 Here is where I am parked up...

And this is my first goal tomorrow...

Yesterday was definitely a learning experience. I have spent plenty of time in my SRV, but had never really had much of a goal other than gathering materials, and looking at specific, often random, things. A trip with a purpose, a set starting point, ending point, and long route in between is quite different, and needs a certain skill set. Over the course of the day, my driving over rough terrain, especially at speed improved, and I have a feeling, that the further into this trip I get, my SRV driving skills will improve even more.

I am going to try and standardize these entries a bit more as it pertains to statistics, but for yesterday...

The starting point was actually off the pole because there was no suitable landing point. I actually drove up to it...

It is actually kind of disconcerting driving up and over the pole, and driving close to it in general, because the longitude measurements kind of fritz out because the lines are converging, and for at least the first few meters, the SRV is spanning most of the planet as far as longitude is concerned. The first several kilometers off the pole saw me bounce into the air along one meridian, and landing in a totally different one.

With regards to longitude...

Of all of the things we take for granted in our daily lives that our ancestors never even knew, the ability to get from one place to another with incredible precision is arguably one of the most important. While land navigation had been reliable for some time with the use of landmarks, and accurate Jovian and Solar tables for determining position, the ability to accurately determine position at sea remained a problem that vexed even the brightest minds in the world, including Galileo, Halley and Newton.

The problem of Latitude had long been solved with noon time solar angle and daily declination, but longitude was far more elusive as it depended upon time. As transoceanic travel became more common in the late 17th century, longitude became a huge barrier to progress. It was such a crucial problem that in 1714 the British Parliament established the Board of Longitude who were tasked reviewing proposed solutions, as well as limited funding authority for promising projects. In conjunction with the Board of Longitude, Parliament also passed the Longitude Act, establishing a prize worth nearly 3 million pounds in today's currency to go to the person who could reliably and repeatedly determine longitude to within half a degree or about 30 nautical miles at the equator.

The next century saw drama, intrigue, and intense competition as several people received partial awards for ideas and inventions that improved longitudinal accuracy. While no one received the full prize in lump sum, the largest recipient, and most accurate solution was John Harrison for his development of the marine chronometer, a spring based timepiece that was able to withstand the rigors of ocean travel, while maintaining a usable precision.

The next two centuries saw people go from being shipwrecked and regularly lost at sea on long voyages, to flying, to landing on the moon, to the average person being able to tell within a few feet exactly where they are simply by looking at their phone. We have come a long way.

As a nod to the longitude problem, and those who solved it, this circumnavigation of a distant world will be along an approximate line of longitude, and establish a new prime meridian.

K
Longitude and latitude always give me problems. When i did my driving, i used this to help: 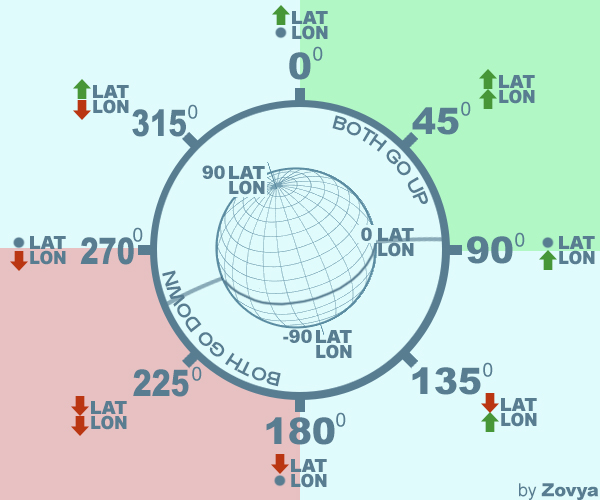 Entertaining AND educational ... oh boy, this one's gonna be good!