well , thats new to me.
Came across another barnacle system not recorded. and wasnt expected either . Hot , much hotter than normal

Grimelinho mapped them, ( aka Mazelinho , another barnacle hunter in this thread )
and seems odd , i would have thought it would have stood out.
Hey when did you locate them? or did you map the planets and they were not there?

Temp is 593k+silicate magma 1G. high metal world. barnacles.
also on 476k and 523k.
another planet in system 593k but no volcanism , and no barnacles.. strange.

maybe a new variety, same thing barny but the planet type and temp range and gravity differ.
Might have to recheck a few similar candidates where they were not before if so.

Not seen temp ranges exceeded like this place before. Probably quite a few new unexpected barnacles to be found. 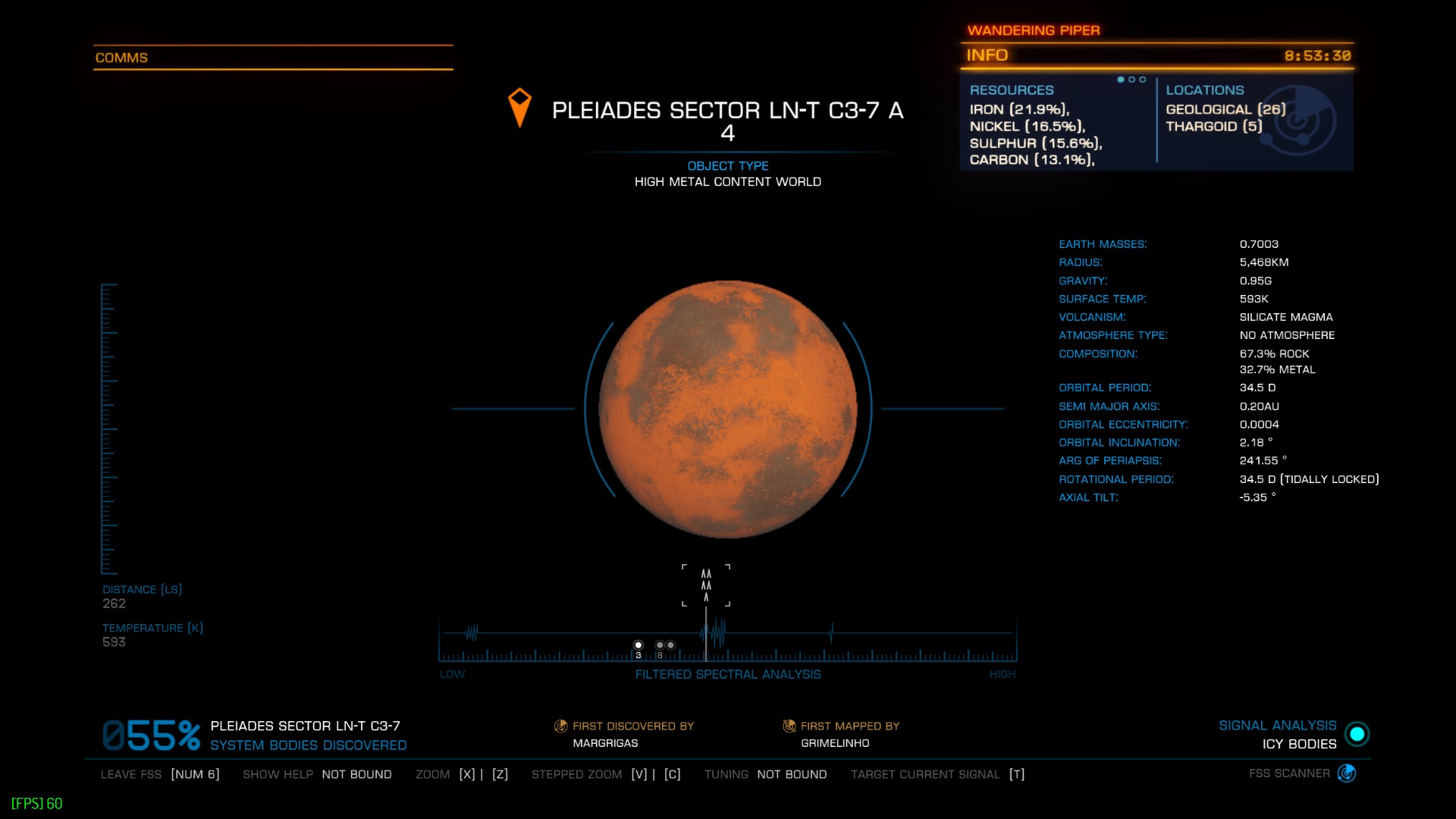 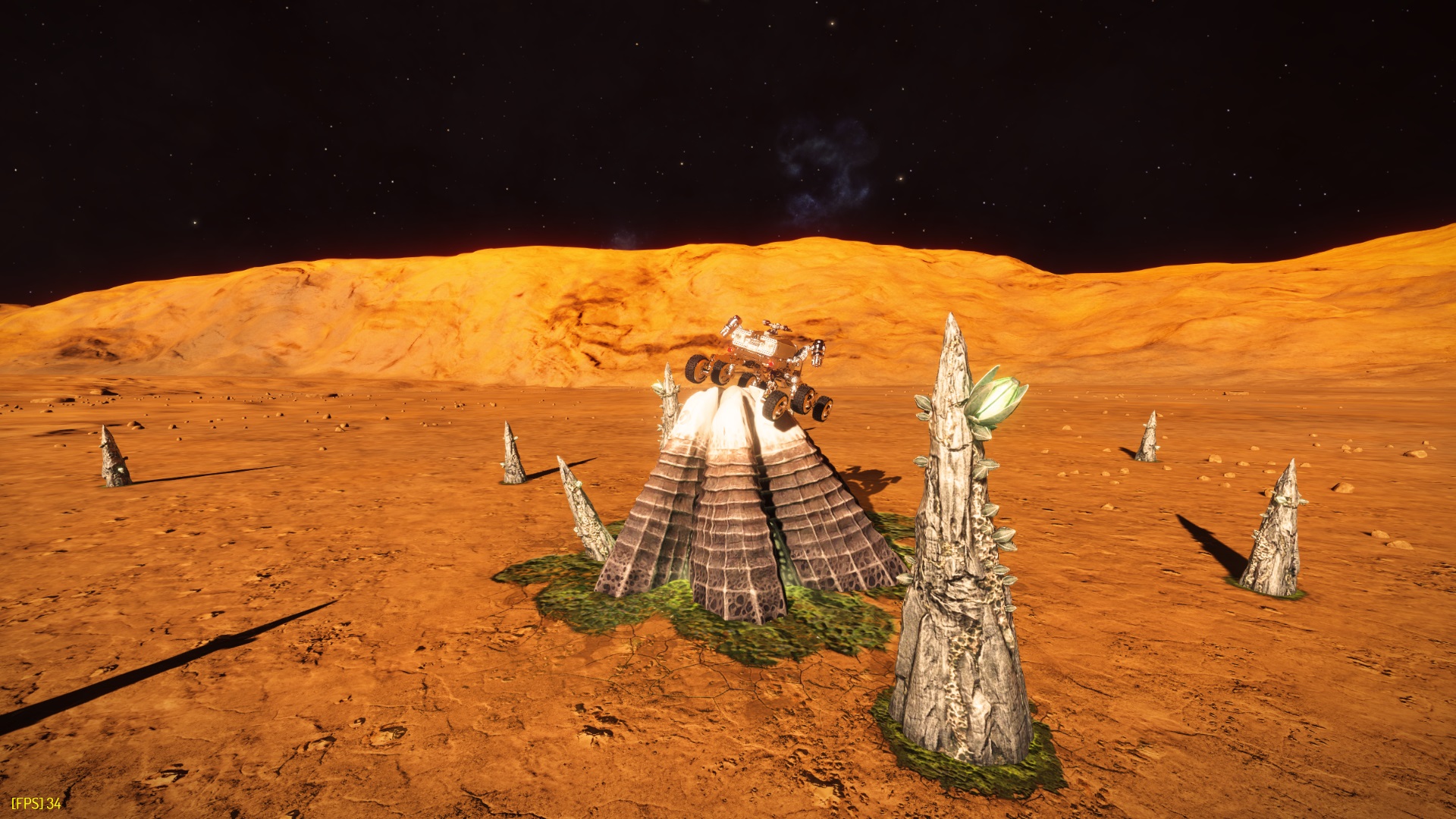 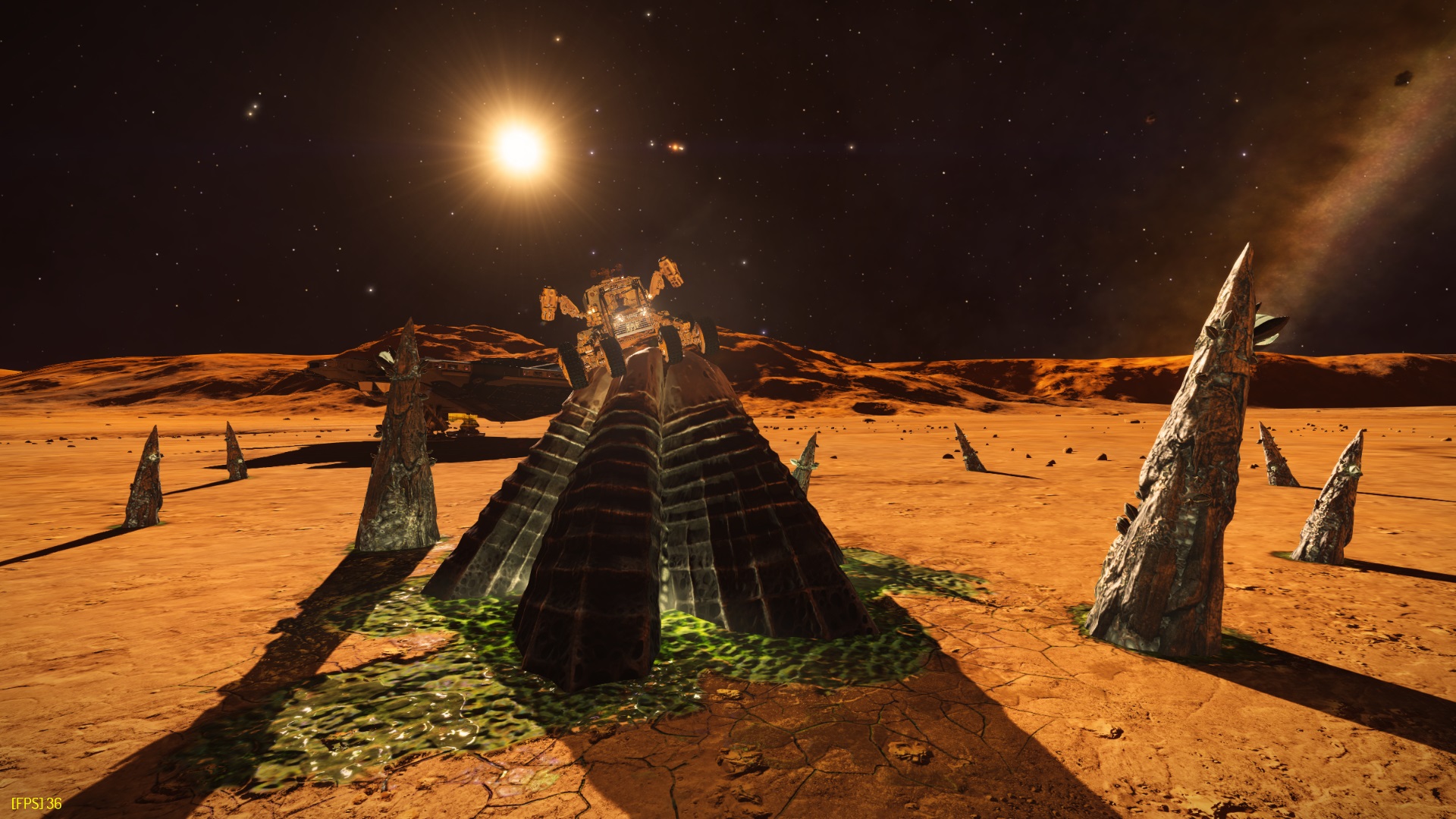 Lol, and an SRV on a barnacle tree!

But I'm confused, are you asking Maze about LN-T?

I guess I am.
When Maze visited, were there hot barnacles?
I am guessing so, explains why he mapped the planets.
Just odd that the temp range didn't stand out as out of place.

Opens up new possible planets and temps to search systems for

and the barnacles flow.
first, since i have little idea where the results of new barnacle finds with new sheets end up, etc i decided to revert and look back at the meta2sheet

tested if its still functioning, and seems so.
the old reporting forms still work and add the data. tested but been adding data directly since i have admin powers on that.

Barnacle/megabarnacle tab, mostly insignificant besides highlighting the forests.
will look into talking with Netslayer who ran the old sheets and forms and see if we can modify the old forms for new info.

I've mapped out two systems over the last day,
one was reported in Feb, by 'Several' i guess several cmdrs came across that system. or several barnacle etc were found, who knows.
Pleiades Sector BQ-Y d59 B 8
just one planet, 1 site listed by several, 4 sites, added screenshot and location correction to them. documented.

30 mins later came across another new system i believe, no reports of this one so far.
Pleiades Sector GM-V c2-3
A1 (5) A2(5) B1(7)
A 1 and 2 were mapped , i guess some cmdrs stumbled upon it and didnt log the barnacles.
C1 wasnt mapped , so i tagged that baby with 7 sites.
Wasnt till i turned in the data and reviewed it, binary system, both stars Tauri. Quite rare to have Tauri with planets but its not the first, just rare.

will be adding Tauri to my search criteria, as overlooked systems presumed useless but not always. Right mass in system code , worth a check to see if that mass made it to planets. If you've been to the Core regions , i will be looking into those next time i'm on my Alt. amazing how many highest mass systems turn out to be tauri stars.
Could be a hidden overlooked secret yet to be found in the core, and elsewhere to that matter.

for ref,
old barnacle report forms still working and adding info to metasheet.
https://docs.google.com/forms/d/e/1FAIpQLSeNBy07tsc1wJIHaYVv8K-WgAj15_8U-WdqFNqIha54cKgEnA/viewform
and the metasheet itself, with its useful filters tab, for Pleiades, Cali, Witchy etc. number of MA, allripe or cyclic ( for those old barnacles )
https://docs.google.com/spreadsheet...3GQhC5KT-o9u05ihWKXebt4BcM/edit#gid=223643326

since dont yet have a way to add barnacle ID numbers yet besides manual edit, would be nice if you add them in numberical order.
i do that while logging them anyway, start at number 1 and work upwards to however many there are.

also the pairing thing , still comes up. they like to pair up. <200km mostly. If uneven numbers of barnacle there will be a stray on the side, but near. most others are always in pairs .
you see that much more so now in SC orbit with visible nav target, and also often the terrain , seeing the location as you approach.

those green sprayed areas , always were relevant it seems. Localised terrain , with the barnacle near mid centre.

i had a great chat with Netslayer, master of the Metasheet.
Talked on the good old days, and it wont be such a problem.

Will update you when new info, but since i am expecting dozens of new barnacle systems over the next month, it will be useful to have that barnacle index number on the old soon to be newer form, but not the new form which goes elsewhere.

there is the new sheet and form made a while ago, which also will need doing but i didnt use that, wasnt so user friendly for searching systems locations etc , lacked the detailed info the metasheet did IMO. All hail Netslayer.

Heres a nice Pic of visiting Cyclops at the barnacle, looked prettier since the update too. 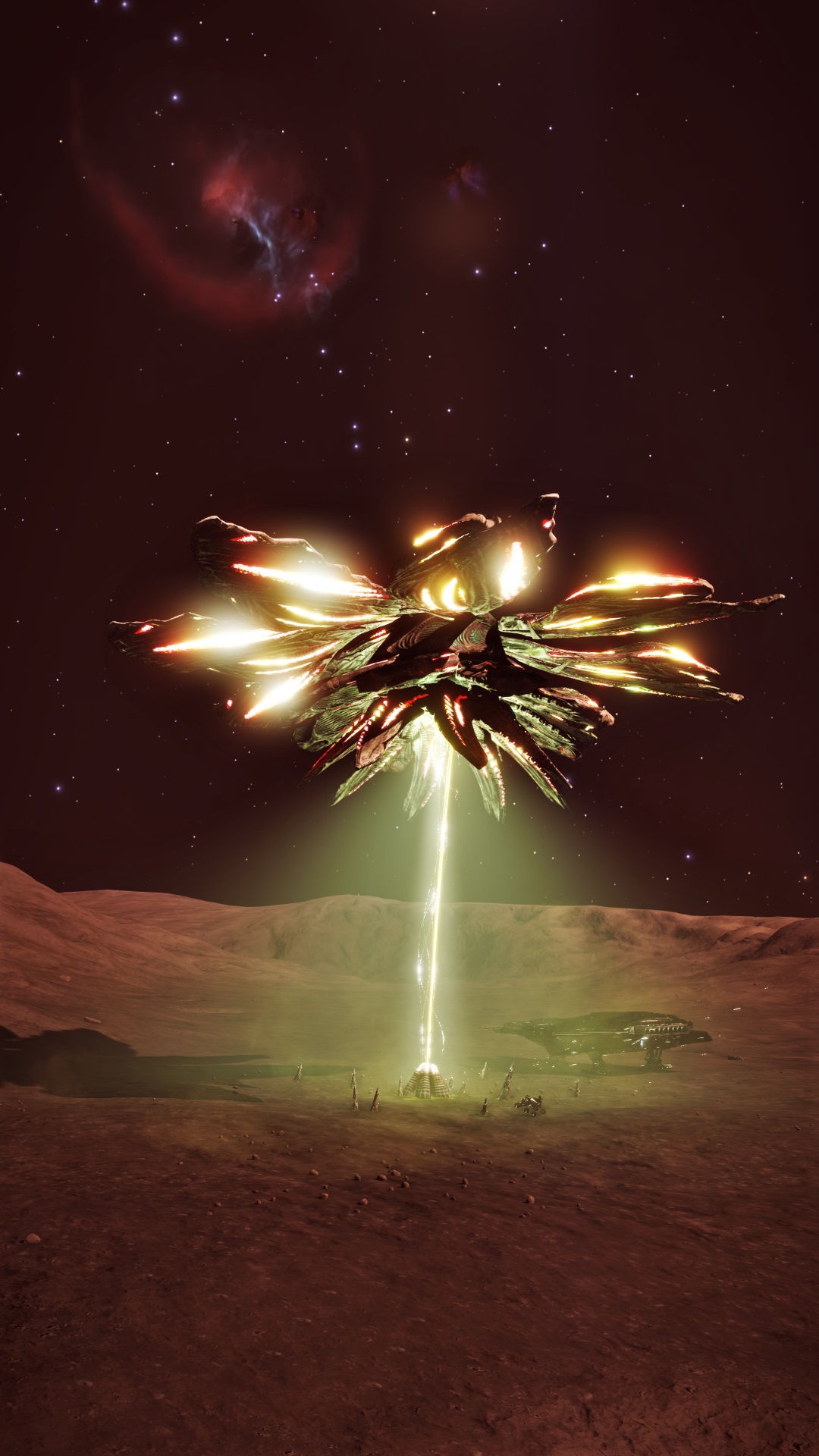 They didnt turn up till the very last barnacle in system

Ive put a bunch of locations out awhile back, they might have been lost tho -Pleiades is purdy big, stretch ur legs a bit. ;>)

M
About hot barnacles in Pleiades Sector LN-T c3-7: I found this oddball system during the beta, or more precisely it was one of my many bookmarked systems. I didn't mention it here because frankly I believe those barnacles shouldn't be there. In other words a software bug. I reported it in the beta bug forum threads but apparently it got thrown into the trash bin by FDev without any comment whether it's intentional or not. When the beta went live with these hot barnacles I decided to tag them with my name as some kind of public bookmark.

Why do I think it's a bug? Take a look at the system. The planets are 700ls away from the main G type star (I could swear it was an F type in the beta). At this distance planets receive significant heat from it. Now image the system would only consist of the barnacle planets and the orbited M-Star. Semi major axis are between 0.04 and 0.07 AU which yield about the known barnacle surface temperatures of 250K - 400K. Take a look at e.g. Pleiades Sector LN-S b4-3 as a reference for distance to M-Stars and heat.

I think back when the allripe barnacles were added to the game the script/filter that selected suitable planets didn't take into account the heat from possible other stars in the system, only the orbited star. Since FDev has a known track record for this kind of issues I refuse to see anything lore or game related things here. As far as I'm concerned these hot barnacles are an error in the matrix Frontier doesn't bother to fix.

New barnacle system. And quite populated too. 50 barnacle sites.

PanPiper. said:
i had a great chat with Netslayer, master of the Metasheet.
Talked on the good old days, and it wont be such a problem.

Will update you when new info, but since i am expecting dozens of new barnacle systems over the next month, it will be useful to have that barnacle index number on the old soon to be newer form, but not the new form which goes elsewhere.

there is the new sheet and form made a while ago, which also will need doing but i didn't use that, wasn't so user friendly for searching systems locations etc , lacked the detailed info the metasheet did IMO. All hail Netslayer.

Here's a nice Pic of visiting Cyclops at the barnacle, looked prettier since the update too.
View attachment 129094
They didn't turn up till the very last barnacle in system

Is it possible you're getting more hyperdictions because your more regularly crossing the 150 LY Merope 'border'? I've found hyperdictions more common in that zone.

Could be some development on barnacles soon
The Enclave

The 4 July interstellar initiative indicates (1) Feds have over harvested barnacle farms of meta alloys and (2) a need to look for another form of meta alloy.

Witcher 7 said:
The 4 July interstellar initiative indicates (1) Feds have over harvested barnacle farms of meta alloys and (2) a need to look for another form of meta alloy.

So I'm hoping for (1) more revelations about INRA or what is Fed's interests in the barnacle farms and (2) a new mat to engineer Guardian tech
Click to expand...

Im hoping that this will bring a plot focus to the California Nebula, and lead to an activation of Thargoid activity and/or mycoid research out there.

But honestly I think that the writer who knew how that was supposed to go has left the building. And this CG Initiative is just a hack job to make noobs engage with some bit of expensive content that hardly anyone looked at.
Last edited: Jun 28, 2019

Witcher 7 said:
The 4 July interstellar initiative indicates (1) Feds have over harvested barnacle farms of meta alloys and (2) a need to look for another form of meta alloy.

So I'm hoping for (1) more revelations about INRA or what is Fed's interests in the barnacle farms and (2) a new mat to engineer Guardian tech
Click to expand...

Aegis is not run by the Federation.

zimms said:
Aegis is not run by the Federation.
Click to expand...

I know but prior to AEGIS formation, Fed capital ships used to restrict access to some barnacle farms in Merope and other nearby systems.

Things are happening, not fully sure but interesting.

First of all, dont panic by Aegis's story, either they know little or its only half the story. lot of maybes and we thinks etc.

Cyclic barnacles first.
No changes to California nebula or Witch head nebula barnacles, they are all as they should be in correct cycles. Cycle B is current

Pleiades cyclic barnacles are affected.
Did a look at several in Merope and Pleione, at various ones which should be ripe as well as the others
First checked Merope 5c, broken should have been ripe.
checked Pleione afterwards as it has 4 barnacles , at least one in each cycle.
A,B and C ones all broken, didnt check the 4th one but might be worth check as with the Merope 2A one.

appears then we are either not in A, B or C cycle or they now moved into a new phase. will monitor for changes.
Merope 2A , visited several with Molan Ryke, all were barren exceot one was ripe.
a guarded 1MA barny with skimmers, but it should not have been ripe until cycle C, not in cycle B.
a strange oddity, also will monitor that one to see if it now has a new cycle or became a allripe one perhaps, not sure yet.

Allripe barnacle systems are fine, no effect, and are ripe as are the forests.
Hyperdictions were up, and had 2 visits at different barnacle forests.

First one was strange, bugged now i think, due to Molan dropping into instance just after it started to beam the barnacle.

then it became odd, and did what i thought was new effects, but it seems in hindsight the three spinning beams going up didnt switch off and stayed on.
That visually messed up its engine trails and it got all freeky.

2nd ejecting of green mist fast before it left was odd too.

Will see if it occurs again for other Cmdrs , or just a one off bug.

Cyclics are broken mostly, few expections it would seem.
Allripes are still good.

Also MA prices seem to of doubled.
highest price in EDMC earlier i heard was 235k

ahaha don't worry I hit up the wrong NHSS and some scouts, uh, redistributed my whole stockpile

anyone wanna come to celaeno to clean up the mess, feel free