Considering that there are way more known allripe Barnacles than cyclic ones I wonder where the meta-alloy shortage is comimg from. Maybe it's just Frontier's way of saying to the larger playerbase "Pleione and Merope aren't the only places with Barnacles, stop using google and search a bit for yourself"

As most agree, AllRipes were not affected. Presumably because those are "newer" barnacles. History of cyclics is hard to gauge. We can speculate they were from last GR-TG war but there are no Guardian stuff in Witchead or California and especially not Pleiades so...

But still, hopefully this CG won't point to AllRipes in Plediades. Hoping for them to be:

Basically a bit closer but same region of space where GnosisGate happened.


So, today checked on many barnacles of the allripe variety. Quite an oddity arises. Allripes appear to be fine, some allripes are not. question is why. affected allripe systems it seems, all in the system are affected or not. Pleiades sector OI-T C3-7 - checked all barnacles in system., all are barren. giving a lot of barnacle scan data packages of many variety. takes time to check all in systems , so needed to speed things up. decided to survey through several allripe systems to see where any change might have happened. considering this old pic i made to help folks in the older days to source MA and some materials, i decided to check on the other systems i listed back then.

After visiting each in turn, just checking the one or two barnacles on nearest planet with barnacles in system , their allripes too were broken. So after checking the listed systems, all appear to of been broken now.

This seems a very uncanny coincidence, all systems i listed in pic are now broken. Checked several other Allripe systems which are more recent but are far less known or visited by the regular public. all of those are Ripe and untouched.

Leads me to two conclusions. either Aegis used that info in the image to harvest other systems, and dont know about the other allripes. or the general public who dont visit other barnacle sites often but head to those systems when in need of MA. its a easy to find source of MA. Could be the overall buckets checking where MA is being sourced was greatly increased in those systems by that image directing folk to those locations... i wonder... thoughts?

still will need to check later on a few other systems allripes where maybe higher traffic occurs.

That image is now obselete for time being as they are all broken in those 4 systems now.

So something has changed over the week.

PanPiper. said:
Leads me to two conclusions. either Aegis used that info in the image to harvest other systems, and dont know about the other allripes. or the general public who dont visit other barnacle sites often but head to those systems when in need of MA. its a easy to find source of MA. Could be the overall buckets checking where MA is being sourced was greatly increased in those systems by that image directing folk to those locations... i wonder... thoughts?
Click to expand... 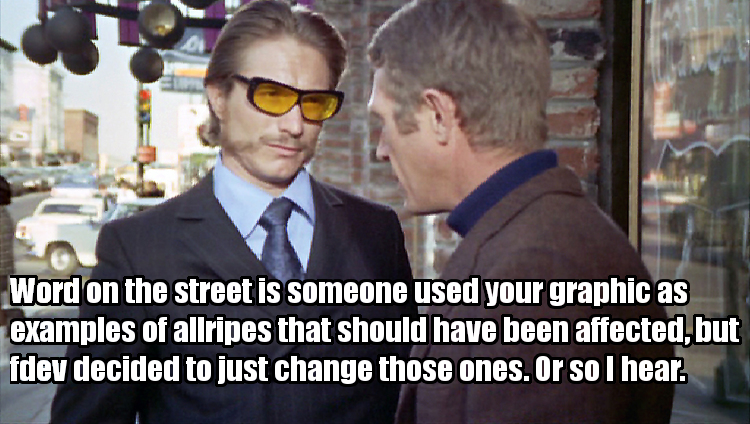 will do more checks tomorrow, another graphic i put out there a little after that one resurfaced today also , forgot about it till earlier.
one listing barnacle allripes by specific raw material for harvesting.
will check on the other allripes and forests more tomorrow , just to see how many allripe systems may be compromised, hehe, just like the data package we get from those barnacles.
14 different sets now, and probably will increase. might have a purpose sooner than later.

I have infomation which i will update on later here.

I recommend to my trusted barnacle hunters here , for now keep new barnacle systems to yourselves.

The barnacles are under threat or a large change. We must become custodians or guardians of their locations to protect them for the time being.
There could be a need for a MA source at some time sooner or later.

Public knowledge of certain locations as resulted in those barnacles in those systems becoming damaged.

PanPiper. said:
Public knowledge of certain locations as resulted in those barnacles in those systems becoming damaged.
Click to expand...

Further checks today i have found nearly all the Allripe systems have been damaged now.
Its a sad day but further research is needed to determine the reasons in their change.

Forest systems however i hear are untouched.
Could be the Thargoids remain to keep those safe , as we seem to only get Thargoid visits these days at Allripe Forests

I can confirm two systems i know of are still alive and untouched. They may be the last two systems in Pleiades too. Barnacles are close to extinction in this nebula
For their safety and research i will monitor if they remain alive if AEGIS is unaware of them.

OP updated , its been a while.

Another survivor system from the cull.

Panpiper
Re your post #491, I would either remove those pics if I were you & replace them with ones that don't show the sky, incase Aegis or their agents recognise the system their in from the star positions! I hope it's not too late already....

ah but one has the skybox visible.

It would be a hard one to do , but possible, but a challenge if FD can locate it. i left the stars for them if they have the ability is another thing. hehe

Developments today, it seems all the known ahem barnacle systems with allripe barnacles have been afffected.
That includes systems with forests in .

Regular barnacles allripe in those systems are depleted, but the forests themselves remain.
Maybe AEGIS *( FD ) are pushing the humans to gather MA from the forests only. only reason i can think is for more human vs thargoid encounters.

Ok, well I suppose if they do work it out, then it gives us an indication of the efforts their willing to use to find further sites....

PanPiper. said:
I recommend to my trusted barnacle hunters here , for now keep new barnacle systems to yourselves.
Click to expand...

I went to see such a system to check the barnacle status there. It's 102ly from Merope, so very few commanders should know about it. All barnacles I checked were broken. The system is 'Pleiades Sector FS-S b4-2'. Since the barnacles are already damaged I see no further harm through AEGIS et al by mentioning it here.

However, this is not the big news with this system. I discovered it Feb 2018. Back then I found a barnacle on planet B 3.
Screenshot 2018: 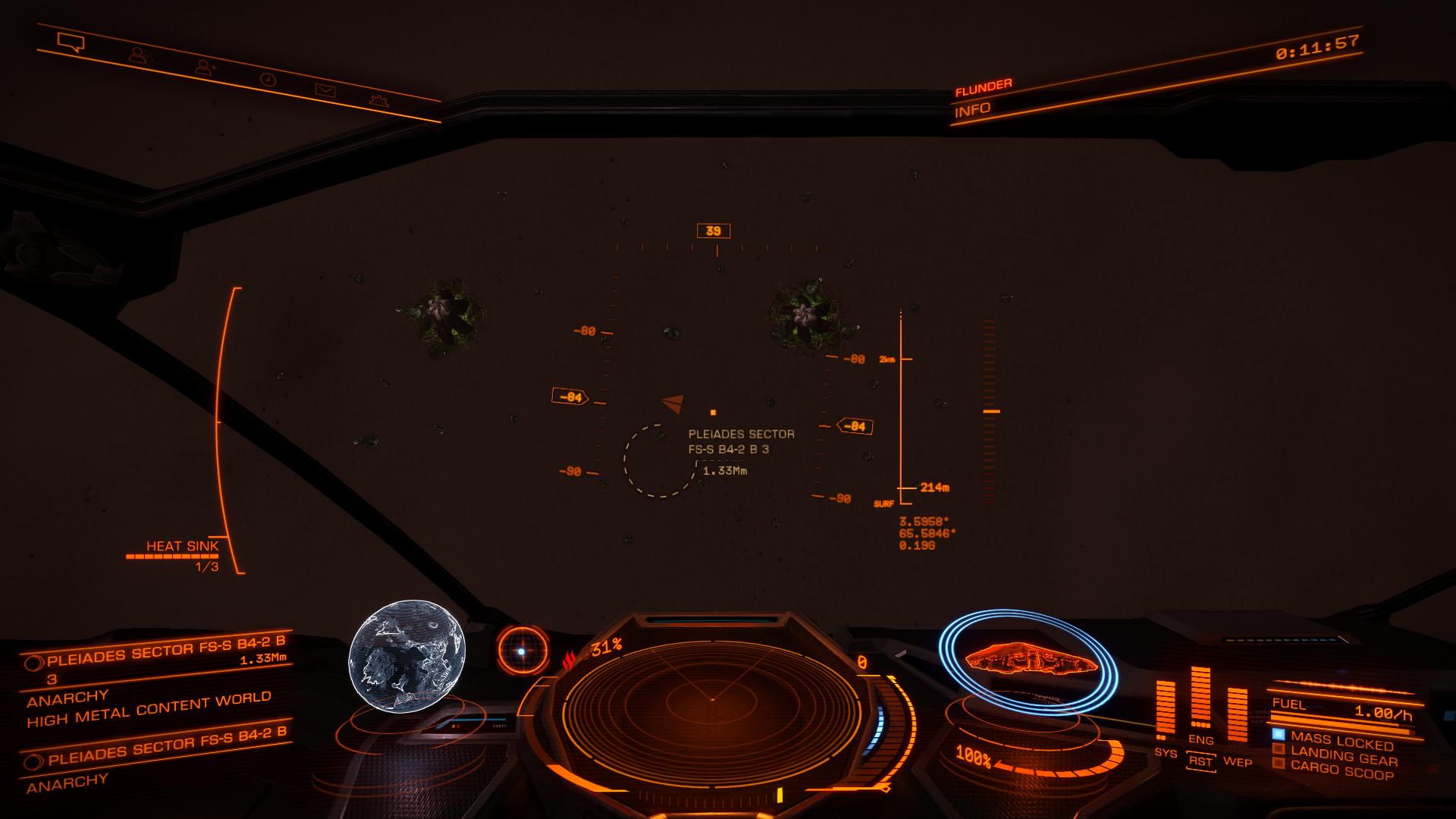 This barnacle is no more! In fact the whole planet B 3 is now devoid of barnacles, even though it fits within the known surface temperature range for barnacles:
Screenshot 2019: 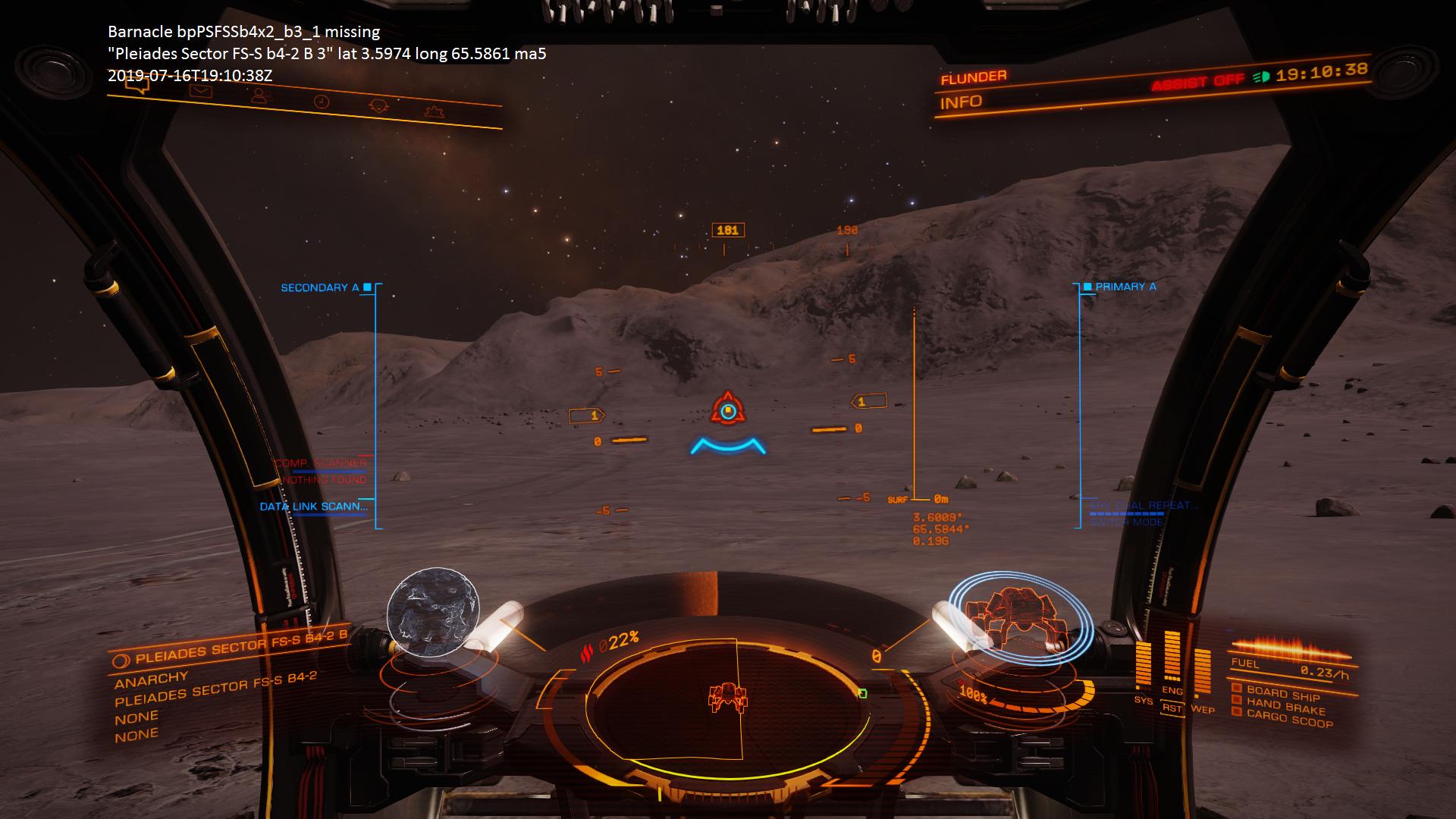 As you can I see I landed at the same spot, but no barnacle is there!

Instead, (broken) barnacles exist on planet B 2 with a surface temperature of 408K. This is beyond the established 400K limit for the (not-any-longer) allripe barnacles.

What happened here? Have there always been barnacles on the (too hot?) planet B 2? Did the Thargoids relocated the barnacles? It seems we're not only facing broken barnacles, but relocated/dismantled ones too.

Sounds like fdev forgot which planet they removed the good barnacles from! Raise a bug report maybe?

Assimilator1 said:
Sounds like fdev forgot which planet they removed the good barnacles from! Raise a bug report maybe?
Click to expand...

After participating in the last beta and Frontier's general lack of interest in my bug reports my enthusiasm to raise them has been somewhat dampened.

Besides this change could well be intended. The barnacles I visited on B 2 were in the usual locations, i.e. bottom of canyons. If fdev would have simply got the planet wrong I'd expect to see barnacles in odd locations. A geological feature at a certain lat/long on one planet certainly won't be the same on another planet at the same coordinates. Also, I haven't seen such barnacle relocations in other systems.

Do we have updated spreadsheet with new barnacles in WHS?

edit: isnt there some barnacle forest?