Am i in the right place to suggest some improvements in the Sandbox market?
(In particular icrease albino rates and better genetics)

Please allow us to edit the starting entrance in Challenge mode!

Bearcat9948 said:
Would love to update this, can you provide any more specifics? Did not see any mention of this in the patch notes.
Click to expand...

In the Zoopedia, the new temperatures ranges are (in celsius):

Aramar said:
In the Zoopedia, the new temperatures ranges are (in celsius):

Do tempratures even go beyond -10 in the game?

Mjmannella said:
The moose in PZ is taxonomically the species as a whole, which certainly hits areas of tundra.

The folders for the moose also specifically call it an Alaskan moose, which I assume was done before further research on moose was done (allowing their whole range to be incorporated).

That being said, temperate compatibility would be great to see as well!
Click to expand...

Don't get me wrong, moose do in fact partially inhabit tundra regions, particularly transitional zones near the forest line. What I was trying to point out to was the method used in the game. Relatively more marginal biomes are usually left out for the sake of game mechanics. Then again we still have some major biomes for some animals left out even after several patches adding new biomes to existing animals, but that's another issue entirely.

To further prove your point that moose do actually make use of tundra regions, even if marginally, here's another source: 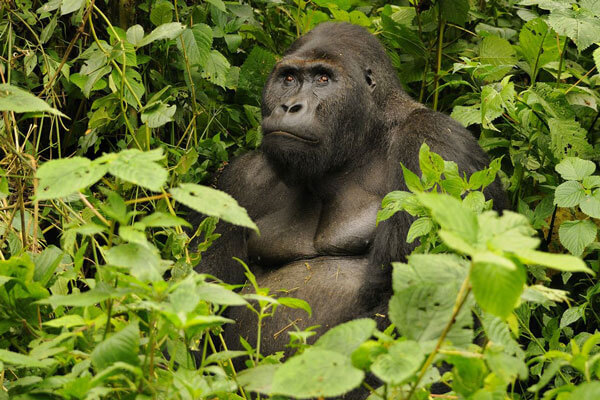 Established in 1964, the IUCN Red List of Threatened Species has evolved to become the world’s most comprehensive information source on the global conservation status of animal, fungi and plant species.

www.iucnredlist.org
Notice how it mentions tundra in text, but since Alces alces is a forest-dependent species, it isn't particularly mentioned in the list below. Alaska for instance is famous for its tundra moose that forms harems.

If you ask for my personal opinion, I would love animals in the game to have as many relevant tags as possible, and in the case of the moose that would be 'Taiga', 'Temperate', 'Tundra' and 'Aquatic', but such an approach would open a new can of worms that will require the devs to add more biomes to existing animals than they do have now. Instead, limiting the range of missing biomes as much as possible might prove to be a more feasible and encouraging approach that might in the end result in more additions compared to the other approach.

That's my own two cents. This is why I have always been prioritizing the "no-brainer/obvious" choices over "marginal/less-obvious" ones.

Wow, amazing work @Bearcat9948 ! Thank you ! There are a lot of suggestions I really like on your list. Yes to wood chip items. Yes to continent map items. Yes to fake eggs (and it would also be amazing to have some skeletons, skulls, etc.). Yes to circular billboards. Yes to more food shops. Yes to 2m and 3m paths. Yes to the possibility of setting the genetic stats of the animals in the market in Sandbox. Yes to all of those.

Regarding animal models, I would especially like the Malayan Tapir to be fixed and the Aldabra and Galapagos Giant Tortoises to be made bigger. Maybe you're right about the bison and the camel but it doesn't really bother me when I see them in the game. But the tortoises... Yeah, every time I play with them, I think they are really too small.

Also, I would add one more very important suggestion to the list: adding backstage props like a hose, buckets, dumpsters, shovels, pitchforks, etc.

yoav_r said:
Do tempratures even go beyond -10 in the game?
Click to expand...

At the moment -12 °C is the absolute minimum (naturally), and you can set coolers down to -20 °C, so the new figures for the camel and bison, as well as the Arctic fox is really out of place compared to other animals - as if the values are for the balancing of another game entirely. As someone who has been advocating for better cold tolerance for both the camel and bison, I can say this change has been over the top, unless they are planning to change the methodology for all animals on the roster - switching to a more absolute maximum/minimum approach. Otherwise these 3 examples, as well as the Japanese macaque from the base game, seem to be following a method of their own.

For more evenly balanced and consistent requirements across the board, I would recommend the following values for these animals:

Or they can take the longer route by adjusting all other animals to fit in with the new system.

Love that you're keeping this up ! I have nothing smart to add rn, but if anything falls on mind I'll be sure to chip in

arafan said:
As for the polar bear food, I've seen them quite often feeding on vegetables and fruits in zoos (and even the herb scent marker don't seem to be too wrong), I wouldn't be against adding meat but I don't it's something essential.
Click to expand...

Block of Frozen Fruit: Doesn't have content information other than the asset name itself, so no problem: 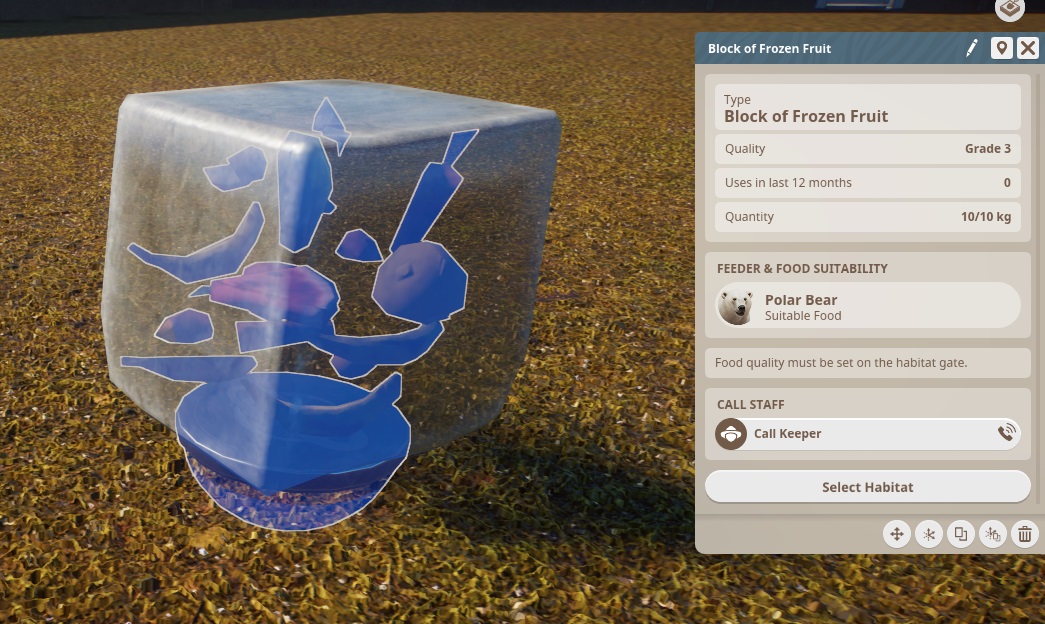 Tree Scatter Feeder: Content information (type) does not match the texture in the enrichment item. Also doesn't match the food texture on the ground: 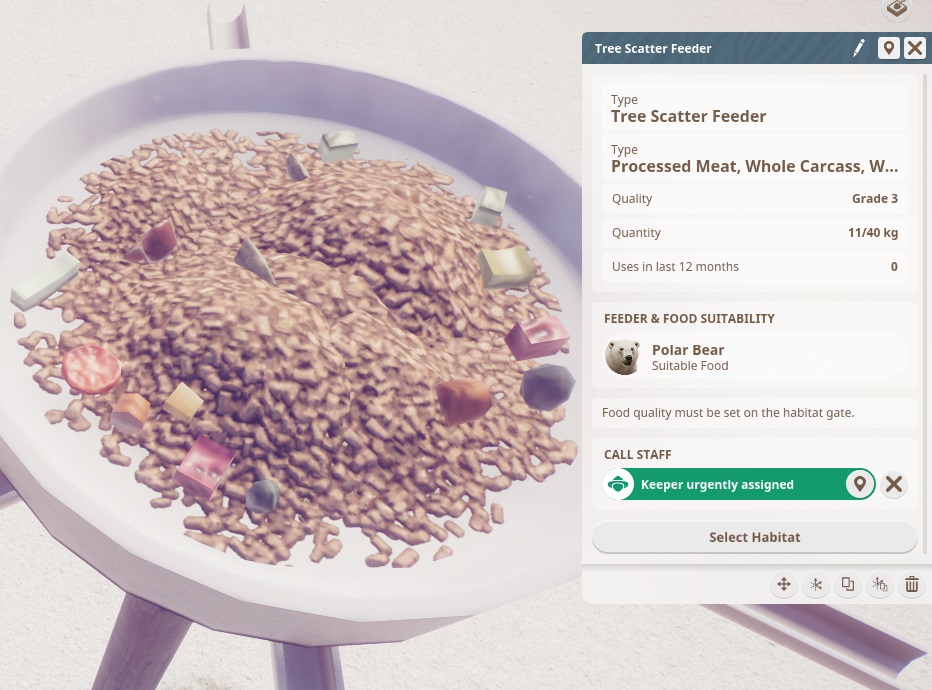 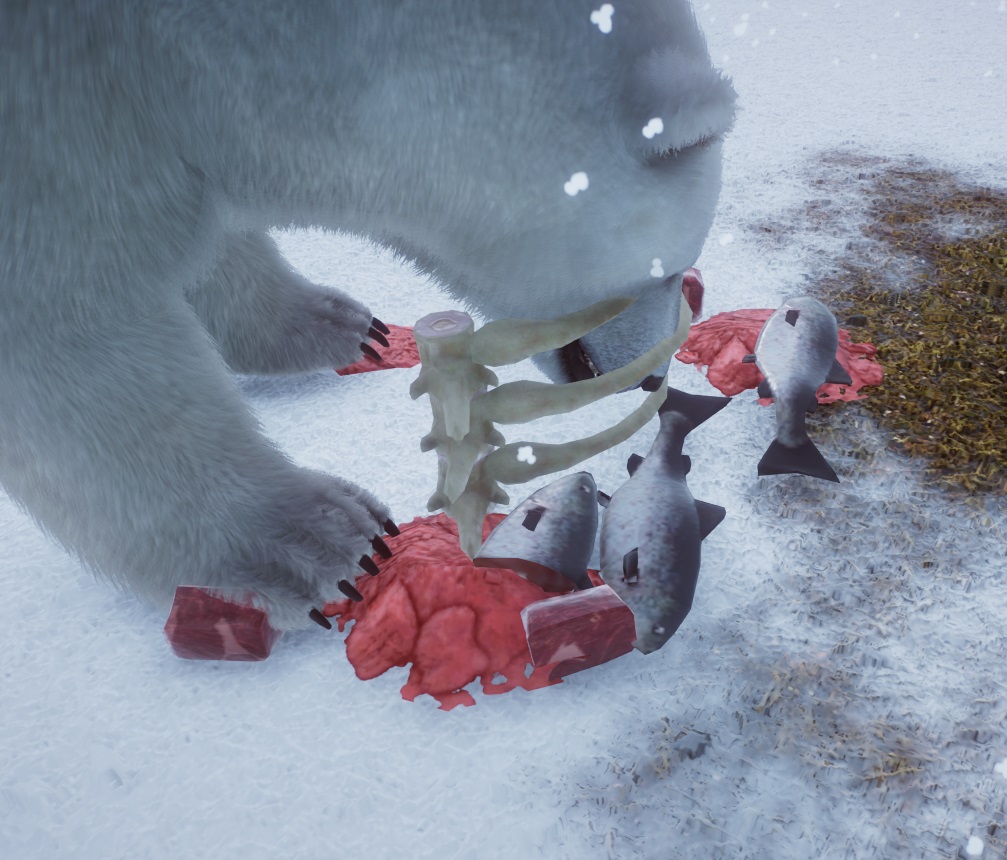 The difference is they are subspecies. There are a lot of animals in the game that use full species names in the asset name but use trinomial names and further explanation in their Zoopedia text to identify the subspecies. On the other hand the AS Elephant and NS Babirusa are distinct species on their own. This was why they made the corrections.

Taxonomy is a complicated and difficult field and at some point you have to pick a point and draw a line, imo. I recommend the African buffalo be renamed to the African Cape buffalo for instance, because it currently represents the cape and forest subspecies, even though they are incredibly dissimilar.

T
-Changing the name of the African Buffalo to Cape Buffalo.

"African Buffalo" can refer to either that one, or the African Forest Buffalo, which is much smaller.

Bearcat9948 said:
The very lower tip of Florida is considered to be tropical climate but not tropical rainforest, from what I understand, but someone else can weigh in on this.
Click to expand...

Southern Florida has very low elevation, which was in fact covered by the ocean until very recently, therefore has poor quality soil for the most part and not enough of it. This is why only regions with relatively higher ground are viable enough to sustain a rainforest as only these regions support the soil necessary for hardwoods (trees) to survive. This ecoregion is called the South Florida Rocklands. The relatively (barely) higher rocky ground allows for enough soil for hardwoods to survive, which supports the only true tropical rainforest on the U.S. mainland and is categorized as part of the Tropical Moist Broadleaf Forests biome. The Miami Rock Ridge, Big Cypress Reserve and some of the Florida Keys account for the majority of this ecoregion and are dominated by tropical hardwood flora. Since the rest of South Florida lacks the high quality soil, rest of the region can only support tropical but low lying soft stem plants for the most part (e.g. Bromeliads: still part of the 'Tropical' biome in the game). The range of some of these tropical species extend all the way into subtropical Central Florida.

So the simple answer would be yes, true tropical rainforests occur in Southern Florida, but in pockets and in places where you can grow trees. Tropical foliage other than trees can grow basically anywhere in South Florida, even outside the boundaries of the SF Rocklands. And some of the tropical foliage also grow elsewhere in peninsular Florida.

The Everglades on the other hand is a flooded tropical savanna, which is why the American alligator is also missing the 'Grassland' tag. In fact they occur in grassland regions more so than the Cuvier's dwarf caiman, the latter which requires gallery forests within the grassland regions to thrive, but nevertheless has the 'Grassland' tag in the game. In addition, an important component of the range of the American alligator in the rest of Florida, Texas and the rest of Southeastern U.S. is comprised of warm temperate, subtropical and tropical grasslands and savannas.

In summary, the American alligator is lacking both the 'Tropical' and 'Grassland' tags in the game. In fact the most marginal of all three of these terrestrial biomes would be 'Temperate', as their range barely extends into the warm temperate region with majority of it being in the subtropical and tropical forest and savanna regions. However they should have all three terrestrial tags in the game nonetheless, even 'Temperate'.

List of 'Tropical' biome plant assets in the game that are found in Florida (mostly South & Central):*
*Please let me know if I'm missing any.
**Tried to use the exact asset names in the game for an easier read

Bearcat9948 said:
Taxonomy is a complicated and difficult field and at some point you have to pick a point and draw a line, imo. I recommend the African buffalo be renamed to the African Cape buffalo for instance, because it currently represents the cape and forest subspecies, even though they are incredibly dissimilar.
Click to expand...

I agree, I'd rather have the subspecies names displayed as the asset name. Was just explaining Frontier's (potential) reasoning to why those two are different.

@DrBurrito, you're right, they do live in flooded grasslands.
Houma, Louisiana is like that
Last edited: Oct 5, 2021

Just want to say thanks for this, both for running this thread and to the CMs for liaising:

I was literally thinking last week how much the bison could do with having the Taiga tag added, and had been adding faux-forests to my bison habitats.. now I can just do it! My favourite animal gets a proper habitat, thank you!

I'd think that Moose should have diving, it's a common behavior for them

O
We need more North American Flora. And there needs to be some fixing of the Doug Fir and Red Cedar. Both are listed as taiga when they need the temperate tag too. They are found in the the pacific Northwest, which is a temperate rainforest, and is like 90+% Doug fir.
We also need:
Coast Redwood Sequoia sempervirens,
any Oregon Grape Mahonia genus,
Alaskan Ginseng/ Devil's Club Oplopanax horridus (A truly terrifying thorny plant),
Oregon White Oak Quercus garryana, (this species is also temperate and was very important in the so-called 'White Oak Savannah' which was an mosaic habitat the was vitally important for many species throughout the Pacific Northwest, including Beaver and Salmon. Today this type of habitat is very rare, with only 5% of it remaining)
Sitka Spruce Picea sitchensis
Western Hemlock Tsuga heterophylla
More ferns.
Lichen. Attachable lichen like with the vines and Virginia Creeper.
You must log in or register to reply here.
Share:
Facebook Twitter Reddit WhatsApp Email Share Link
Top Bottom