My 1 month completion of over 210k Ly around the galactic circumference, earning 7.5 billion credits

Before this trip I had never completed any long distance exploration trip in Elite. Starting the trip, my exploration rank was only Trailblazer (< 4 mil Cr earned) with 72% progress to Pathfinder (unlocked at 10 mil cr earned). My trips always unintentionally and abruptly ended less than 10k ly into them with me doing something stupid like trying to fly upside down near a planet's surface with my 5D Thrusters on my Anaconda and only a 3A shield, plummeting to my death, and losing hours worth of data. After learning SEVERAL of Elite's 'exploration no-nos' the hard way (lessons like: 'always check the gravity of a planet before trying to land' and 'don't initiate jumps with the fuel scoop still engaged'), and heavily engineering my Anaconda to a jump range of 75.85 ly with a full tank to 78.88 ly on empty, I decided to make my first actually successful trip in Elite: Dangerous something I hadn't quite seen done before in the time I was planning on doing it in: 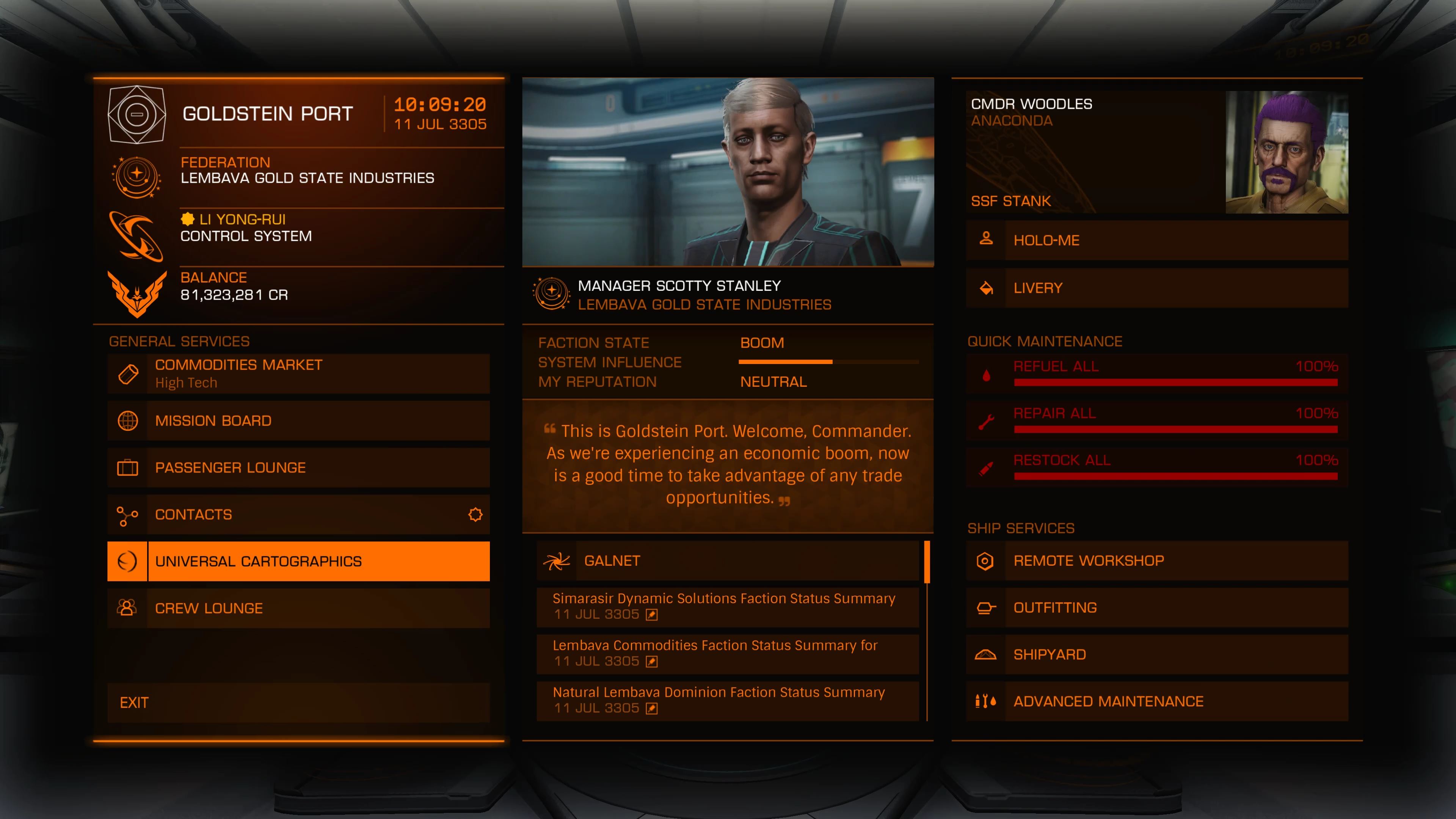 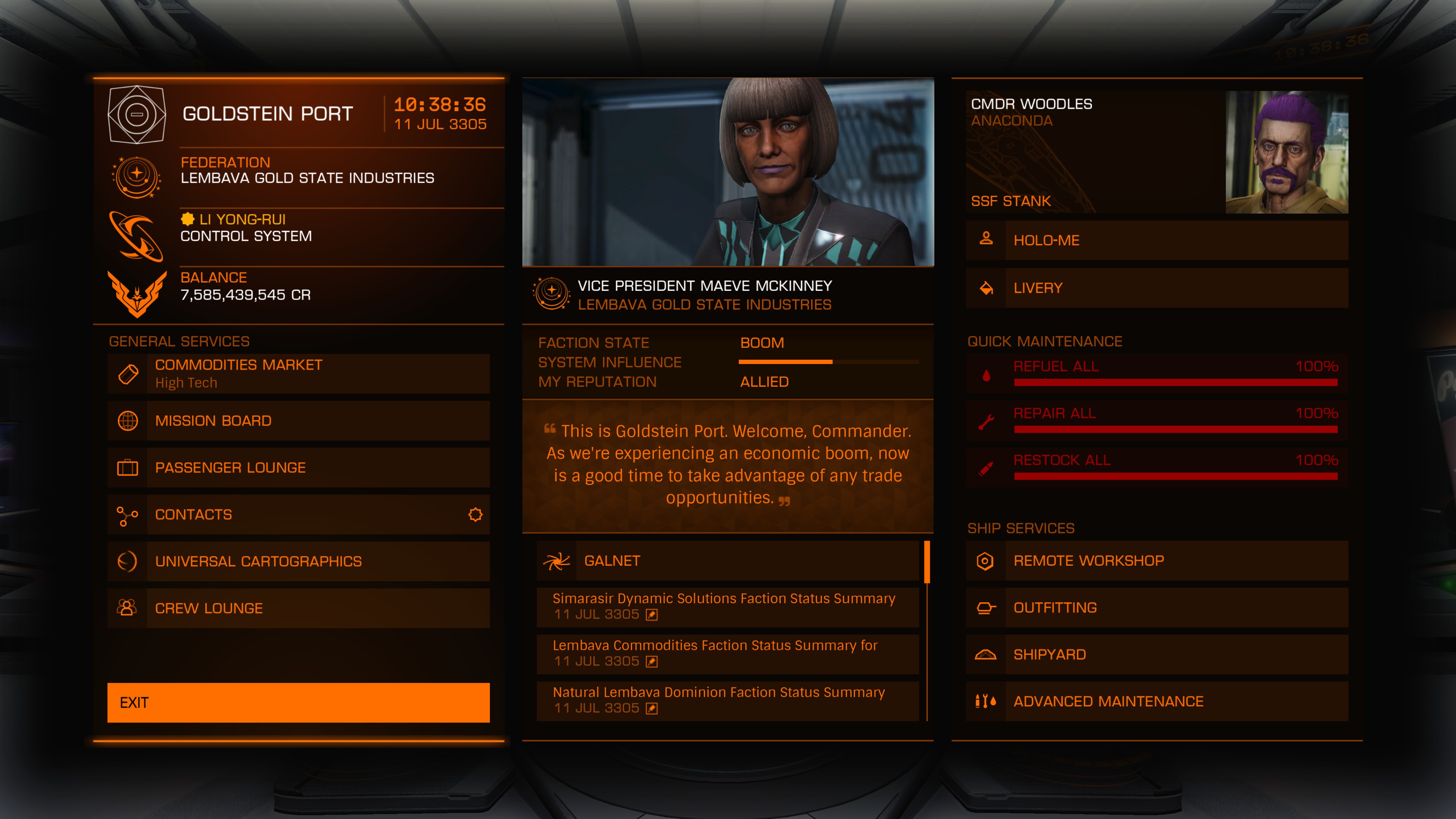 My route consisted of several 20k ly stretches using jet cone boost, following whatever systems the route plotting took me through. After the first 100k ly or so, I filtered out L, T, Y, and Proto stars. I did 100% FSS scan in every system I passed through and surface mapped all ELWs, Ammonia Worlds, Water Worlds, Metal Rich Bodies, and HMC and Rocky Terraformables. At first, I mapped anything within 15k ls from the arrival point and included Class 2 Gas Giants, but realized how huge of a time sink that was, stopped DSS on the Gas Giants, and reduced my range for DSS to 5k ls from the star with the exception of VERY valuable solar systems I considered worth the trip. If I was going to get food or use the restroom I would try to use the time constructively by flying to a valuable, more distant star for some scans, but other than that I stuck to the 5k ls limit. I also chose a route that was far off the normally traveled paths, so > 99% of the systems I encountered were first time discoveries. My waypoints for the trip in order were: Maia, Eifogy ER-V D2-4, Blaea Eurl VC-Z C27-0, Shumboo VA-E C28-0, Cyaumia ED-B B56-0, Ploxea AB-D D13-0, Iorant EQ-X D1-0, Syneayoi GP-E C25-0, Pyrivae BK-Z D3, Syroagaae NN-S D4-0, Ainairk AA-Q C21-0, Grie Eom ER-J C10-0, Slegiae WO-A D1, and finally home to Meliae. There were a few in stances I would have to use some FSD boosters and jump up or down a few systems to reach an area where the system density was high enough for the route to be able to plot successfully.

Will I ever do something like this again? No. Absolutely not. That was the most painfully long month of gaming ever. But now I'm rich and exploration ranked Elite, so it was totally worth it
Last edited: Jul 11, 2019

At first, my reaction was, "yeah, okay". Then I read this:

Woodles said:
I also did 100% of the exploration in VR.
Click to expand...

Oof. Respect for that! Personally, I find exploration the worst in VR, especially with the FSS, and I still prefer plain old screens for this. Then again, I think I might just be too sensitive to the optical errors. (A minute or two after I'm doing nothing but looking around, I start to notice them and become keenly aware that I'm wearing two lenses in front of my eyes. Not an issue with combat and other gameplay that doesn't have nearly as much downtime as exploration does.)

Woodles said:
I did 100% FSS scan in every system I passed through and surface mapped all ELWs, Ammonia Worlds, Water Worlds, Metal Rich Bodies, and HMC and Rocky Terraformables.
Click to expand...

Okay, yeah, I think I'd harm myself before I would complete such a trip in VR. If you did this all the way to the end, kudos!

Also, it was a month in real time, but how much play time did it all take? How many hours per day would you estimate?


Woodles said:
Will I ever do something like this again? No. Absolutely not. That was the most painfully long month of gaming ever.
Click to expand...

But why not? The FSS is so rich and complex gameplay

marx said:
Also, it was a month in real time, but how much play time did it all take? How many hours per day would you estimate?
Click to expand...

I don't know how to track that exactly, but I started with my play time in the mid-500 hour range and my playtime currently sits at 737 hours. I know I averaged about 25 jumps per hour when I was bored enough to keep track (obviously varying depending on the systems I encountered) and the route plotting averaged out to around 300 jumps per 20k ly run. At first I was only doing 4-8 hours a day, and even stopped a few times to play through the new Borderlands 2 DLC and finish the last half of Wolfenstein: The New Order, but in the last week I just wanted to be done and was doing 12-14 hours a day.

And kudos for doing it all in VR. I play exclusively in VR (except for occasoinally quickly logging in to look at something in the map, or codex, etc), including all the boring parts, so I know how it is.

Woodles said:
but in the last week I just wanted to be done and was doing 12-14 hours a day.
Click to expand... One month? Brother you have endurance powers.

"Scooping/Fuel Scoop disengaged" must still be ringing in your ears.