Question for the Devs: Why logs are not saved in to the Codex? Please fix that. This is important part of exploration game play.
upd. 15.06.2021 - Today on livestream Zac said that he passed this problem to devs! Thank you Zac!
(Will update post periodically) ( SOLVED NOW ) 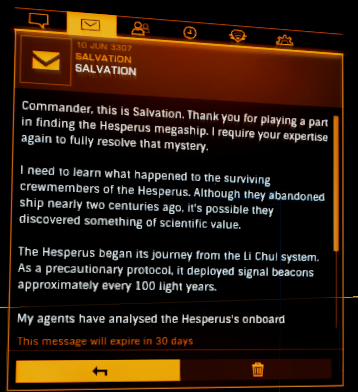 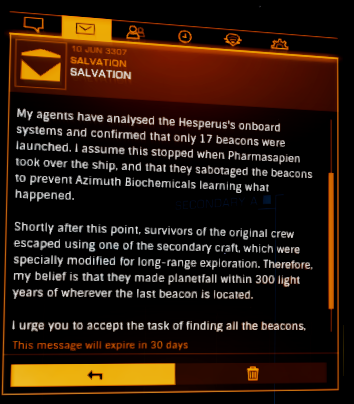 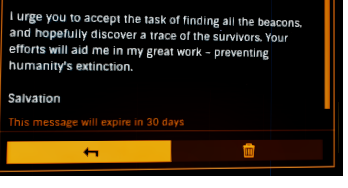 Refresh page if you can't expand the full text:

Commander, this is Salvation. Thank you for playing a part
in finding the Hesperus megaship. I require your expertise
again to fully resolve that mystery.

I need to learn what happened to the surviving
crewmembers of the Hesperus. Although they abandoned
ship nearly two centuries ago, it's possible they
discovered something of scientific value.

The Hesperus began its journey from the Li Chul system.
As a precautionary protocol, it deployed signal beacons
approximately every 100 light years.

My agents have analysed the Hesperus's onboard
systems and confirmed that only 17 beacons were
launched. I assume this stopped when Pharmasapien
took over the ship, and that they sabotaged the beacons
to prevent Azimuth Biochemicals learning what
happened.

Shortly after this point, survivors of the original crew
escaped using one of the secondary craft, which were
specially modified for long-range exploration. Therefore,
my belief is that they made planetfall within 300 light
years of wherever the last beacon is located.

I urge you to accept the task of finding all the beacons,
and hopefully discover a trace of the survivors. Your
efforts will aid me in my work - preventing
humanity's extinction.

CM said, during the Hesperus search, that this mystery is for everyone. This means that it does not require Odyssey to find the escaped crew.

Timestamp: 21/09/3113 18:25
This is Lieutenant Hugo Kelemen. l was deputy security chief aboard the Hesperus, working for Azimuth Biochemicals. I’ve decided to resume my reports, even though the chances of us being rescued seem to be shrinking each day.
After Pharmasapien’s sleeper agents took control, I managed to get some of the science team off-ship using the Proteus. For the record, Private Adriana Velasco performed her duties exceptionally, and her family should be informed of her bravery. We only escaped thanks to her. I just hope she found her own way home.
I wanted to set course for an inhabited system, but Dr Farrell insisted on investigating readings sent back by one of Azimuth’s deep-space probes. She believed that Pharmasapien would focus on all the probes they’d sent to the California Nebula, but that we might find something interesting in the opposite direction.
Well… she was dead right about that.
There’s no doubt that the structures on this moon weren’t built by humans. Those strange arches and monoliths are over a million years old, according to molecular scans. Ackermann, the xenoarchaeologist, said it felt like he was walking through the ruined temples of forgotten gods. I just felt like a trespasser.
We‘ve also found even stranger things, half-buried in the ground as if fallen from the sky. But they look more like starfish than starships… the sort of deep-sea creatures you find on ocean floors. What the hell flew around in those?
Farrell thinks we’re looking at an ancient battleground. The structures and the starfish-things are nothing alike, suggesting totally different species. Two intelligent races on the same world – incredible! Both far more technologically advanced than us, but not so advanced they didn’t try to kill each other.
This is exactly what Azimuth has been looking for, although I doubt they ever expected a discovery like this. I’m more concerned about surviving long enough to tell them about it.
We’ve been here for two months now, living off recycled air, food and water. The scientists have turned the Proteus into a research facility, and all I can do is keep out of their way while they analyse their findings and test samples. They’ve almost forgotten that we barely escaped mass slaughter.
I spend a lot of time monitoring the sensors. If those Pharmasapien mercenaries find us, we won’t stand a chance. But I can’t understand why Azimuth hasn’t sent out rescue parties. Unless… the sleeper agents sabotaged our beacons before they were dropped? Did they pre-program them to stop transmitting?
If they did, then nobody knows we’re here. We’re alone.
Just us and the ghosts of the gods.
Click to expand...

Timestamp: 26/09/3113 04:04
This is… this is Kelemen. I’ve just given myself the last of the stimulants. That should… should keep me going long enough to record this.
To tell Azimuth. How we died.
Three days ago, I went with the survey team to the structures. Ackermann and Zhou had brought something to life. I saw this pillar rise up from the ground with a large crystal inside it, blazing a brilliant light. After a million years, their machinery was still functioning!
They fired up some kind of high-energy particle accelerator, which shocked the crystal from its moorings. This didn’t feel like archaeology to me – more like grave robbing.
I should have known there’d be defences, but the hovering drone caught us by surprise. It vaporised Ackermann along with three others. I managed to destroy it eventually, but there were more of them gliding around the structures, and we got out fast.
I offered to take the crystal back, thinking the drones might come looking for it, but Dr Farrell already had her experiments ready to go. Weapons experiments.
She told me that was always the priority for both the Adamastor and the Hesperus. Locate non-human technology that could be developed for the military market. Azimuth wants to be the first corporation selling alien weaponry, which will make them bigger than Sirius. That’s all they care about… that’s who I’ve been working for all these years. No better than Pharmasapien after all.
A few hours ago, I was woken up by this intense blue flash – it seemed to come from everywhere. I thought we were under attack. Then Farrell came stumbling out of her lab, her clothes and body burned black, and dropped dead.
The others started collapsing within the hour. I think there was some kind of radiation surge from the crystal we stole. I tried to get the ship’s drive online again, but… too weak. Can hardly stand now. Pain in every muscle, vision is blurred. My skin is… like everyone else’s.
God knows what experiments Farrell was running, but… now there’s three… three dead races on this moon.
We shouldn’t… be here. Humans… don’t belong. If Azimuth finds us…
Please… don’t find us…
Click to expand...

On the planet are 5 Thargoid signal sources with crashed Thargoid ships.
The Hesperus crew POI is named ''AZB2/H002255/SC-01''
There are also 2 Guardian sites. One Guardian structure, which has console. With ''key'' from Guardian beacon elsewhere you can gain ''Guardian ship blueprint'' needed for obtaining Guardian ship-launched fighter.
The other one is just Guardian ruin.

It's vessel site, so you need an ancient key from the orbital structure and you'll unlock a vessel blueprint(for Guardian deployable fighter) Cheers, 07

forums.frontier.co.uk
CMDR ''Carl account'': -''After logging in post update (xbox) I'm in system PMD2009 48 which is an asteroid base in the Orion Nebula. It had 2 factions now 4. The 2 new ones are Taurus Mining (aka who paid us during the previous Salvation messages) and Aegis Research. Both have megaships in system, only 134ly away from the current bread crumb trail. Pick a side CG anyone? Salvation or Aegis?''
Last edited: Jun 17, 2021

A
You was faster then me to start topic

A
Any bets, will it be solved till Sunday?

tl;dr
The ship plotted 17 beacons roughly 100ly between each other. The survivors used a ship closely after beacon 17 and should be somewhere in 300ly radius. 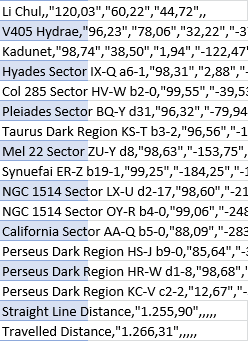 those systems are approx. 100ly away from each other.

I'm guessing... 17 clues, one at each beacon, hinting where to go from Perseus Dark Region KC-V c2-2

If I was them, I would have tried to go back. So the 300ly should be from Perseus Dark Region KC-V c2-2 to Li Chul. This would be:
(around) that system...

Max Bothin said:
So the 300ly should be from Perseus Dark Region KC-V c2-2 to Li Chul. This would be:
Click to expand...

This last known point 200 years later. Beacons could driver us 2000 ly in any direction. Then from there salvages moved it to last known position. They had 200 years.

Max Bothin said:
If I was them, I would have tried to go back. So the 300ly should be from Perseus Dark Region KC-V c2-2 to Li Chul. This would be:
(around) that system...
Click to expand...

I am here and start to go to the PDR c2-2 system from here.

Can someone point me in the direction of the backstory for this?

It used 17 beacons to get there so can't have travelled much more than 1800 LY in the process (or it would have dropped an 18th). The straight-line distance between the systems is ~1250 LY so there's plenty of room for it to have taken an indirect route ... but equally it can't have gone too far off-course.

Given that those coordinates are on the opposite side of Sol from each other, either the first couple of beacons are in the bubble - and should therefore hopefully be located fairly quickly - or the first moves were just to get out of and around the bubble, using up a fair chunk of distance and making the remaining ones closer to a straight line route. Once one or two of them are located we should be able to start making more precise guesses about the positions of the rest.

Question: are the three beacons we found last time (Taurus, California, NGC 1333) three of these 17, or part of a separate set? There was no indication from their earlier messages that they were part of a larger group but it might be worth another investigation.

If you're going out looking for these 17 ... don't forget to check the asteroid belts!

Baron Bosc said:
Can someone point me in the direction of the backstory for this?
Click to expand...

The last event in this story was the discovery of the abandoned and ancient Hesperus megaship - you can follow along at https://forums.frontier.co.uk/threads/galnet-update-08-04-3307-adamastor-update.570642/

As a brief summary:

So, has anyone found the first beacon yet?

Do you think we can exclude the new Odyssey landable planets? Since I assume they would not exclude people without the DLC from this search? Anyways, I am out at Perseus looking around

Aurora Velius said:
Do you think we can exclude the new Odyssey landable planets? Since I assume they would not exclude people without the DLC from this search? Anyways, I am out at Perseus looking around
Click to expand...

Good question. I somewhat hope that at the end we're going to find some sort of abandoned makeshift settlement where the survivors managed to live for a while. Complete with the new Space Legs interiors to explore and search. This could be on some airless rock (approachable with SRV for Horizons players as well). I guess that's part of the mystery we're now trying to solve
You must log in or register to reply here.
Share:
Facebook Twitter Reddit WhatsApp Email Share Link
Top Bottom