2 things today: The 1st of at least 2 Nepali-themed mainstreet taxpayers and the 3-tiered pagoda I built just to made simply as a starting point for the taxpayer.


NOTE: "Taxpayer" is US firefighter slang for 2 or 3-story mainstreet building with the ground floor all shops and the upper stories residential-type things. Every culture has them.


Workshop link to the whole Himalayan collection so far: https://steamcommunity.com/workshop/filedetails/?id=1541306696


The taxpayer was copied from a real building in Katmandu's Durbar Square. It appears to have grown out of a number of separate buildings that became conjoined over time. It's also copied from only the west-facing side of a large, square building with a central courtyard. No 2 sides of this large building look anything alike so it probably wasn't planned, either, but just happened. As such things really aren't a good fit for PC, this blueprint is intended to run along 1 side of a mainstreet area, so has a definite front and back, the back being intended for a backstage area so is rather plainer and mostly just emergency exits. But it's lit and trimmed so will look OK if seen over the treetops from elsewhere in the park.

Anyway, nearly the entire street frontage of the taxpayer is shop doors which you can leave closed or open to something inside. Shops, restrooms, hotel, restaurant, any combination thereof, that's up to you. Whatever best suits your needs.


It has nearly 1700 parts as she stands, without any shops or their wares (which in real life spill out onto the sidewalk in brightly colored heaps). The high part count is because nearly all the walls and windows are custom. I went through and fixed all the z-fighting I could find but there's probably still some (and unavoidably so on the rear roof). If you find any really nasty z-fighting, let me know so I can fix it. 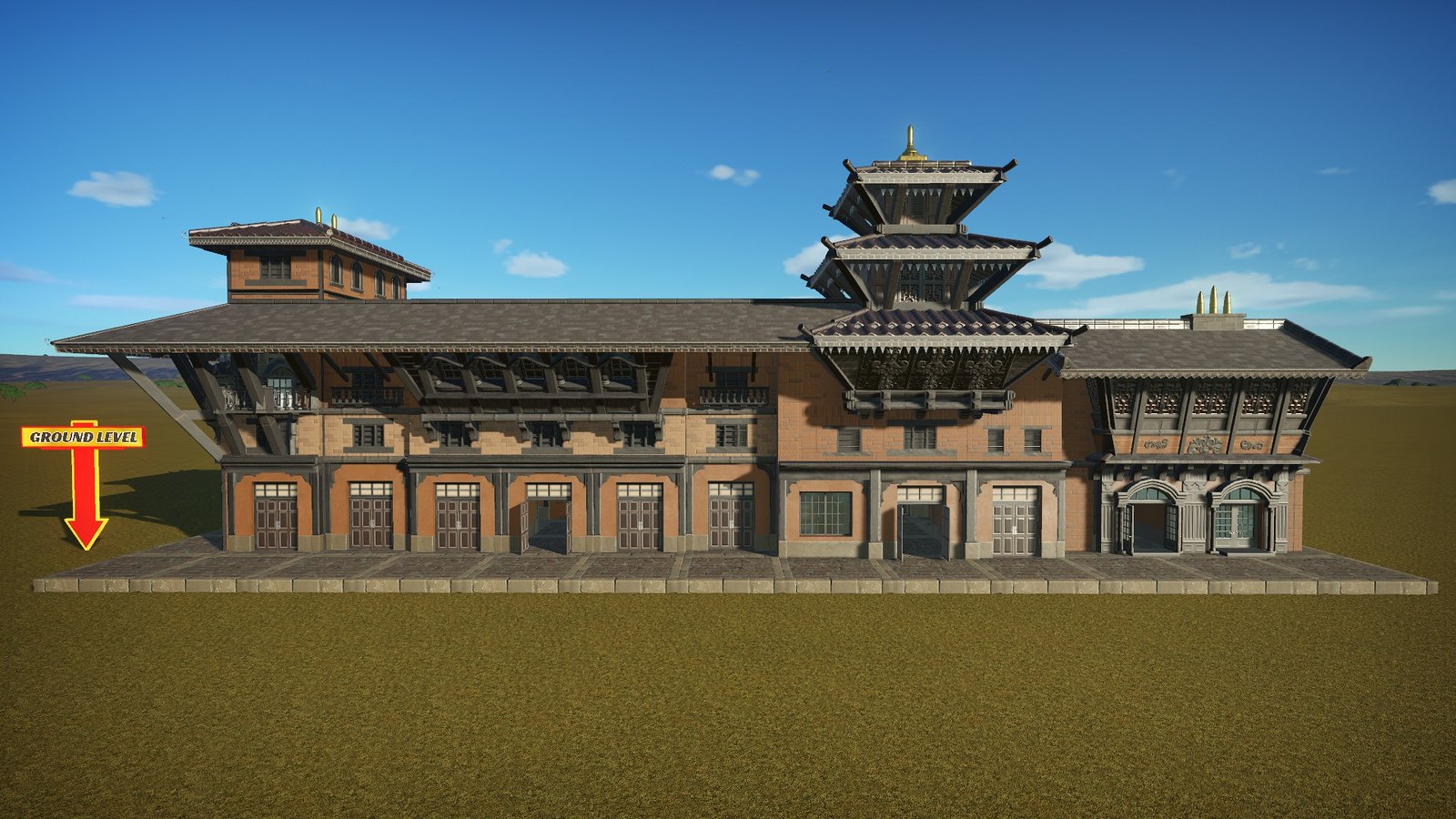 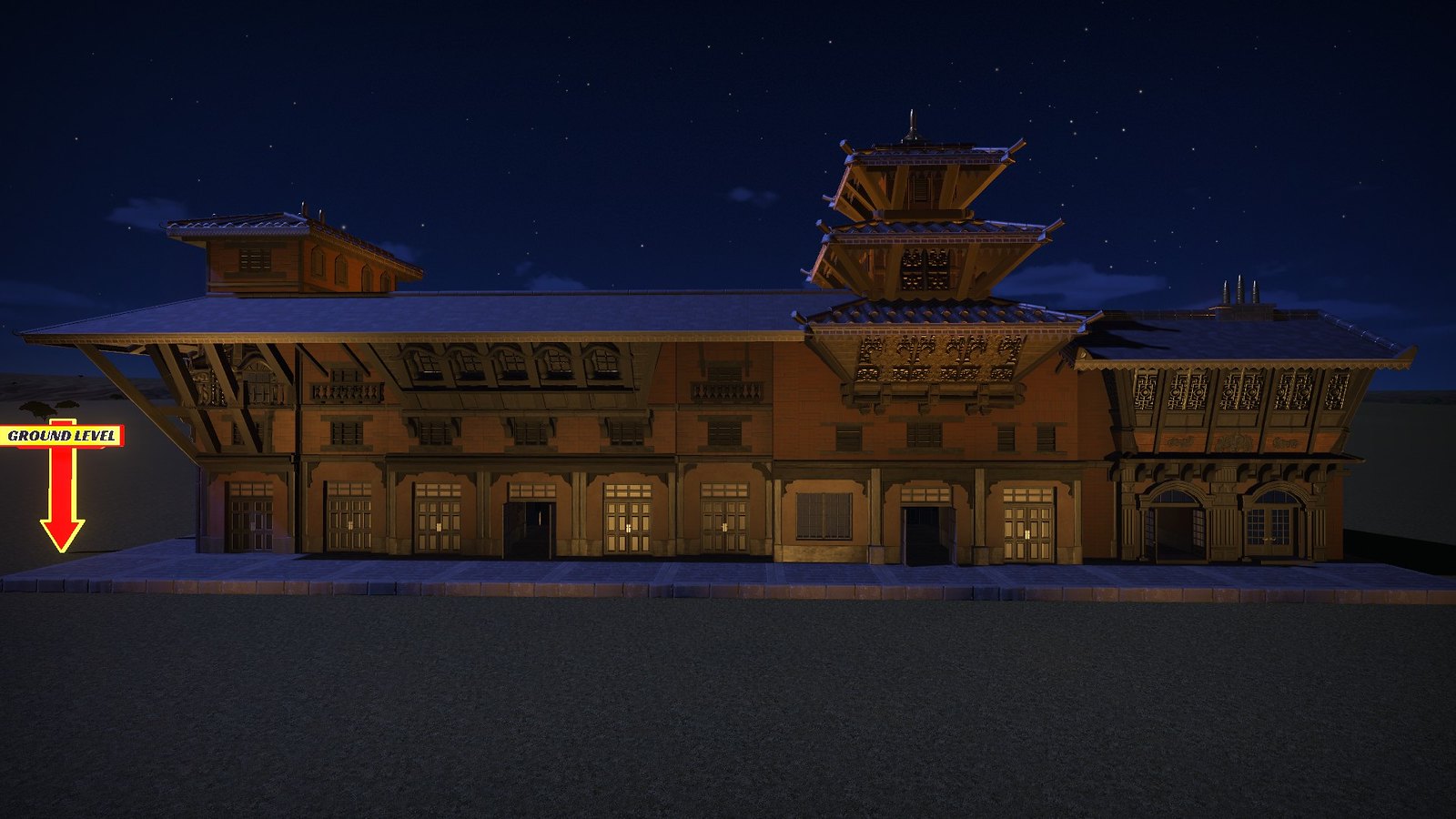 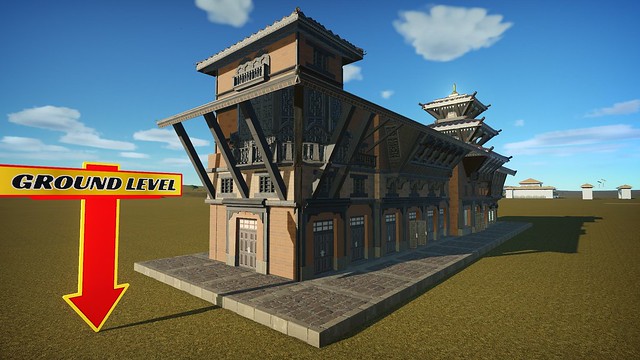 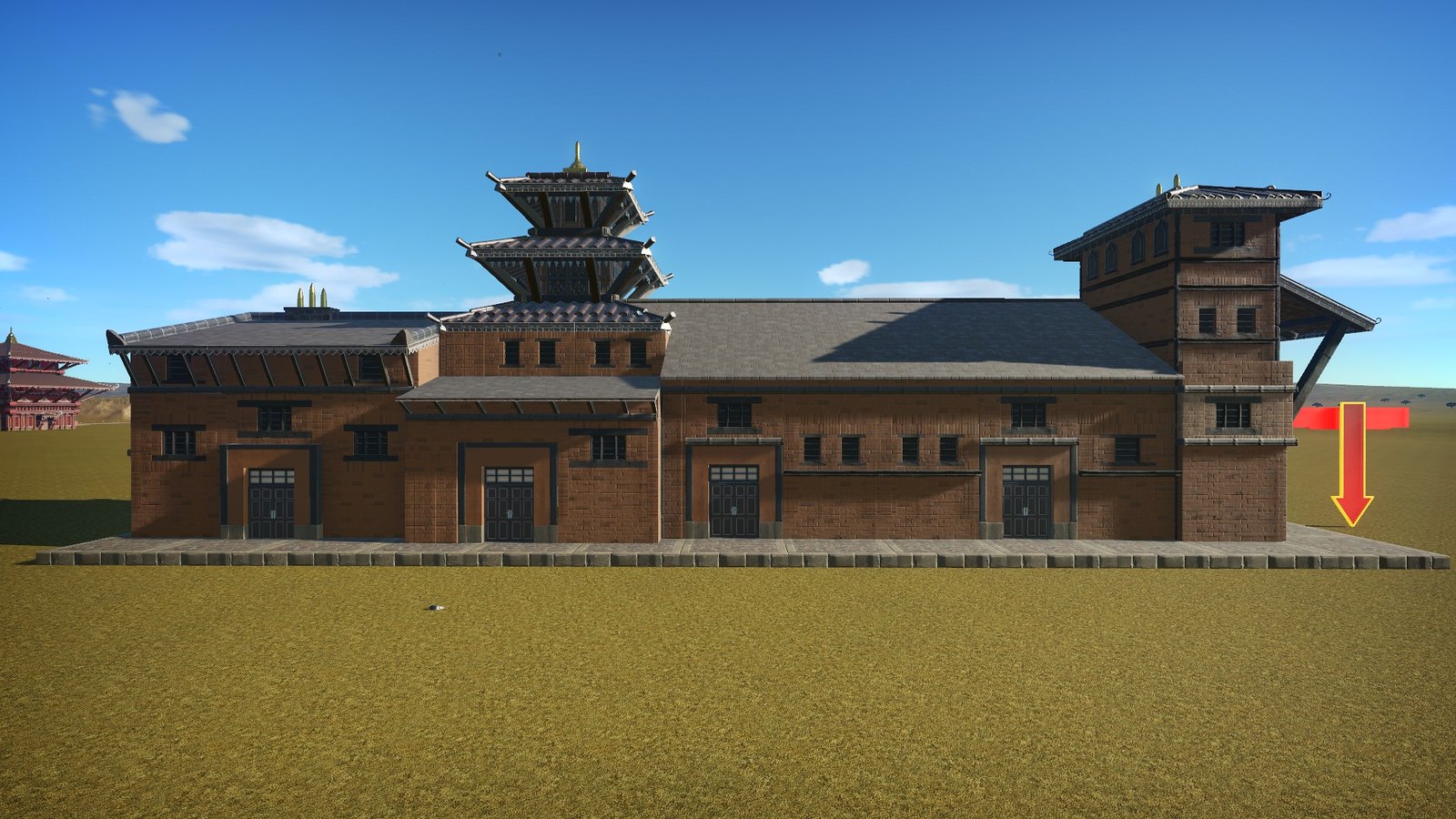 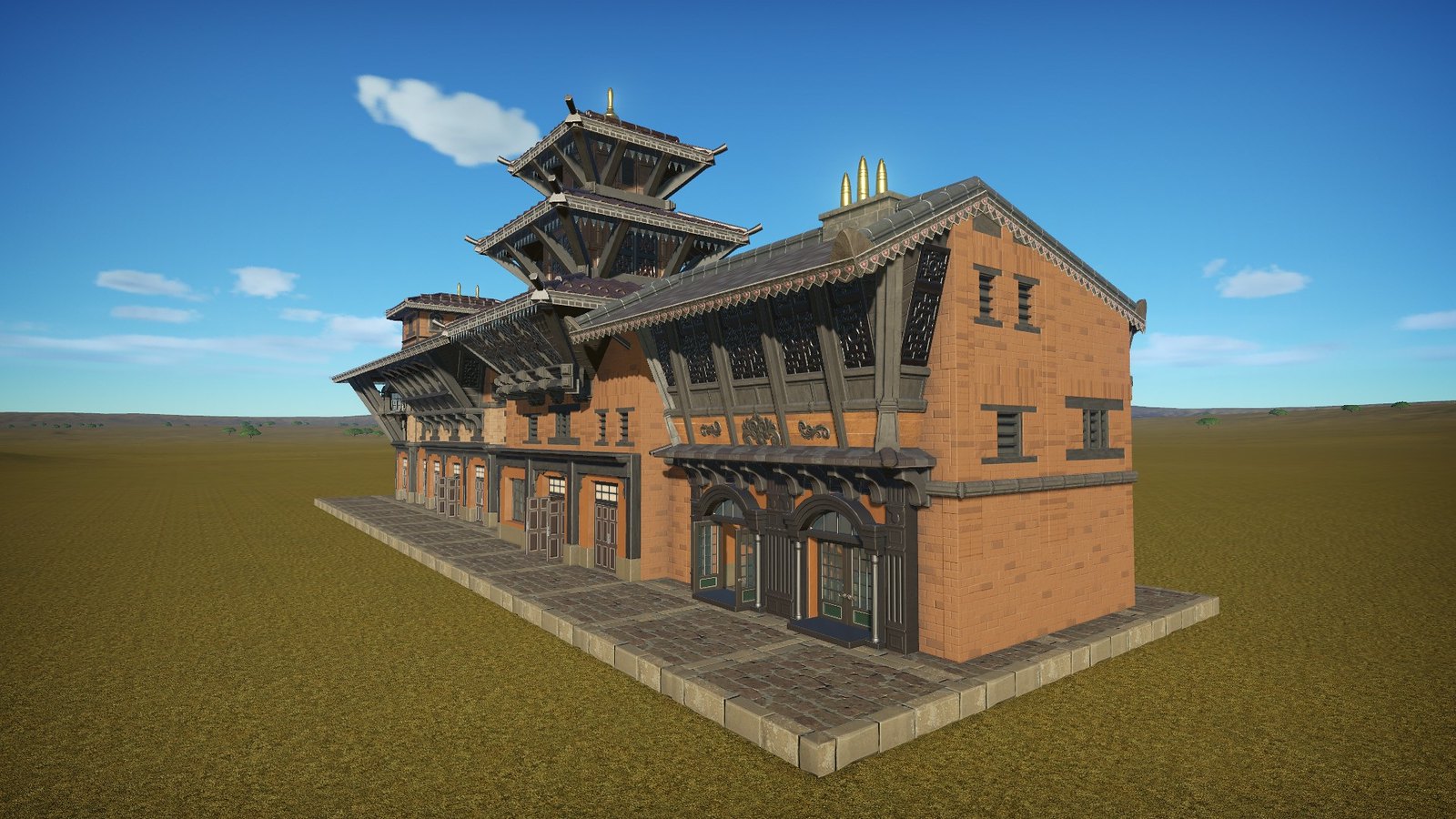 
Not much to say about the 3-tier pagoda: 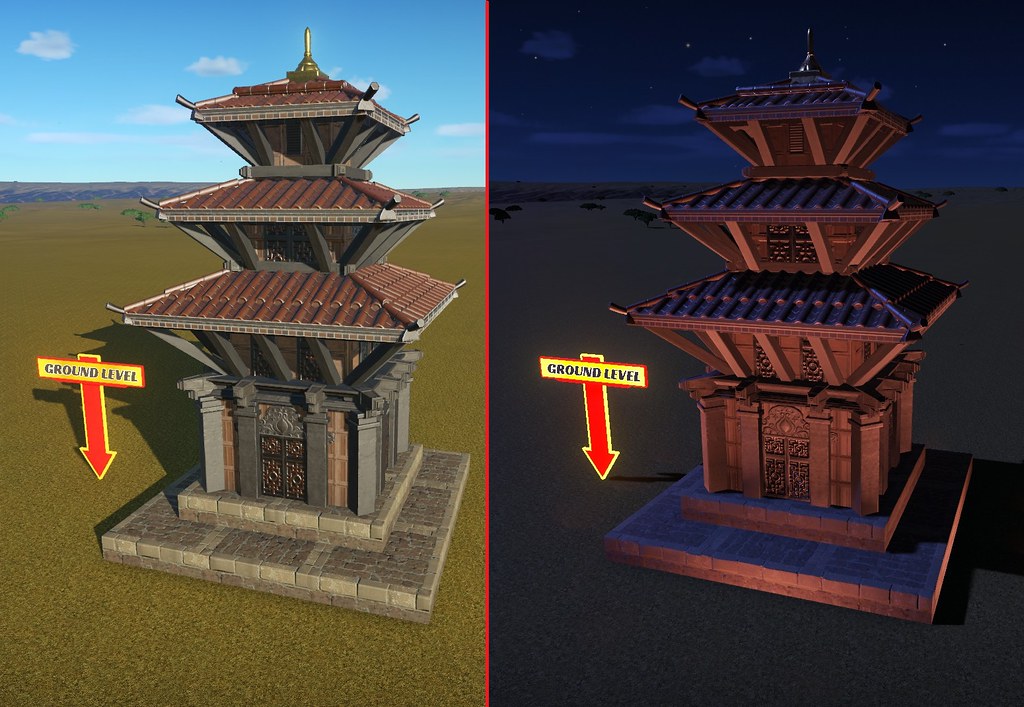 
And here's a view of all the Nepali stuff so far in 1 big pile: 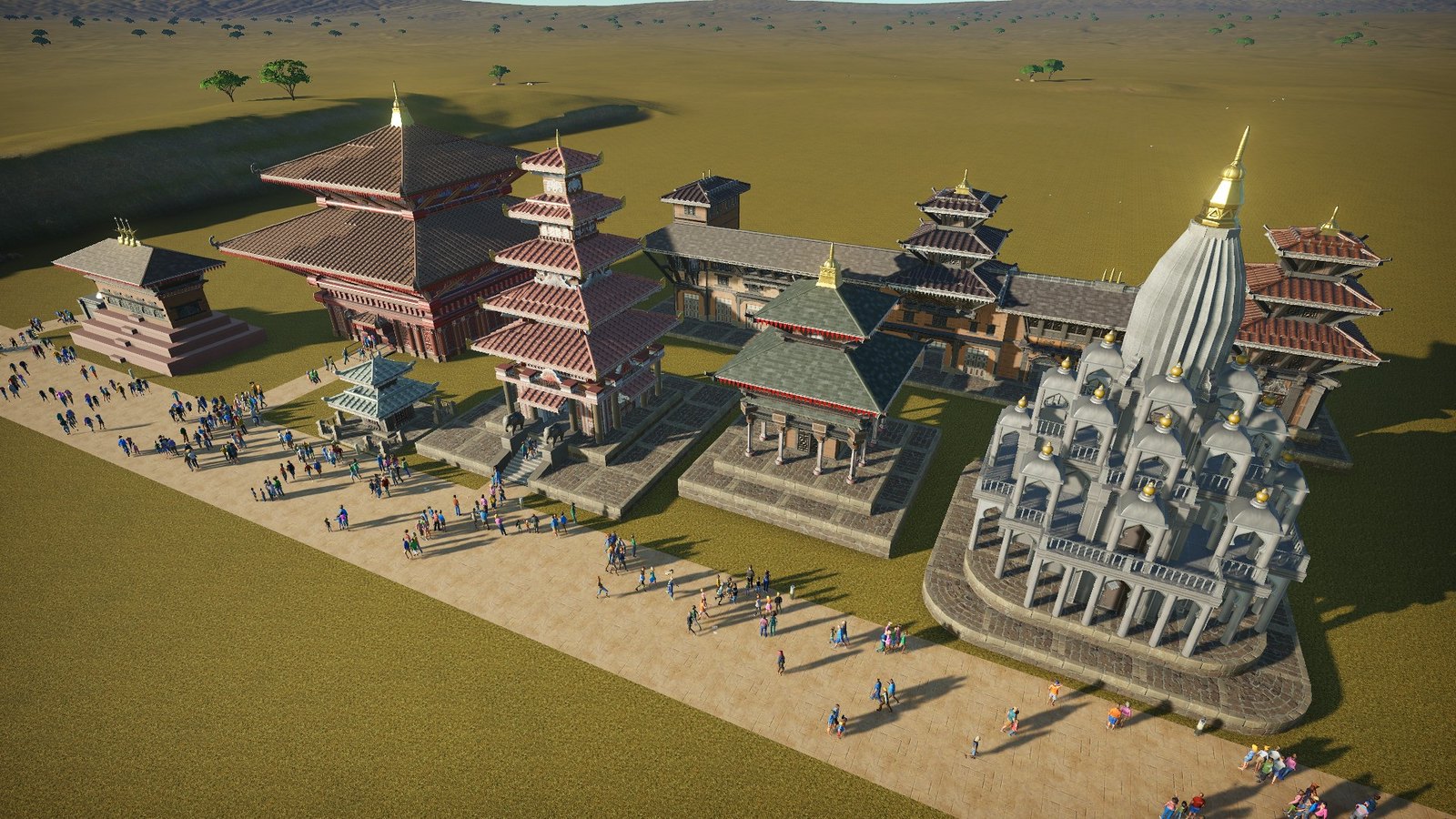 I’m loving the collection. It’s inspiring me to do my own area when I am next in a suitable scenario.

One thing that I think would look good to expand your collection is a Nepali themed flat ride.

Thanks, Mez! Glad you like it and I look forward to seeing your own exotic collection .

I'm taking a break from Nepal at the moment and am having a go at Bhutan. Once I get something done there or give up on it as too difficult, I'll come back to Nepal and do at least 1 more mainstreet taxpayer. The existing buildings are pretty easy to tweak in both color and trim details, and to rob sections of to build something else kinda modular. You really don't want the pieces to fit perfectly . Anyway, doing that you could make a ride skin pretty easily, I'm sure.

Impressive work, Bullethead! Thanks for sharing these buildings.

Bullethead is the master of this Nepali style [woah]


RedHair said:
Bullethead is the master of this Nepali style [woah]
Click to expand...

Only because nobody with actual talent seems to be doing it at present .

I really love your buildings. Unfortunetely I know Nepal only from TV-Documentations and Pictures, but from what I've seen there you are very close to the originals. Could maybe need some prayer wheels and a golden Buddha statue ... but that just suggestions. Keep on with this theme.

Spanky said:
I really love your buildings. Unfortunetely I know Nepal only from TV-Documentations and Pictures, but from what I've seen there you are very close to the originals. Could maybe need some prayer wheels and a golden Buddha statue ... but that just suggestions. Keep on with this theme.
Click to expand...

I've never been to Nepal, either. I just thought it would be fun to build a park in the Himalayas somewhere so started looking at pics of the architecture of the whole region, which varies a fair amount amongst the various countries. Of them all, I thought Nepal had both the most interesting stuff and also the easiest to do (not much of the sloping walls that are common elsewhere). So I put Bob Seger's "Katmandu" song on continuous loop, picked some Nepali buildings from pics and Google street views, and started making similar things and a few actual copies.

As to Buddhist stuff, there's really very little of that in Nepal. Which seems strange because Buddha was born in Nepal but, as Jesus said, "no prophet has honor in his own country" . Anyway, the Nepalis are about 80% Hindu, only 10% Buddhist, and 10% a mix of everything else. So pretty much all the pagoda-looking things in Nepal are actually Hindu temples, despite the pagoda's strong association with Buddhism in places like China and Japan. Learning this was another of the things that attracted me to doing Nepal-style buildings.
Last edited: Oct 27, 2018

Wow!,
Great work, thank you for sharing.
Thumbs up from me.[up][big grin]