Neutron boosting - worth it?

I think I’ve got a post somewhere involving some quick mafs on my trip to Beagle in ‘17. Results were similar. I was covering an average 5200ly per hour with the old build if I remember right. I think my build was 53ly on a full tank and 60 something max.

Neutron boosting can definitely be quicker, if you don’t dally too long. Once you get a good rhythm going, you can really cover some distance.

I feel like manually typing each Star could really slow you down.

Yeah, that rhythm is an important aspect of it, if travel speed is the goal.

I don't usually do straight buckyballing, but I did the Colonia trip from the bubble in just about 3 hours once, using a 72 ly Anaconda. That includes the first 45+ minutes it takes to get down to the corner of the neutron field from the bubble, using the in-game plotter. My 50+ ly exploration ships can cover about 9kly/hour doing this, and I think the Anaconda was hitting almost 10-11 kly/hour. In contrast, back when my AspX was doing around 50 ly (before the FSD boosters were a thing), I think my best non-boosted buckyballing was about 3 kly/hour, which makes sense considering that 3000 ly / 50 ly = 60-ish jumps (in reality it's more jumps than that, due to zigzagging and sub-optimal jumps, which get made up for by executing jumps in less than 60 seconds). 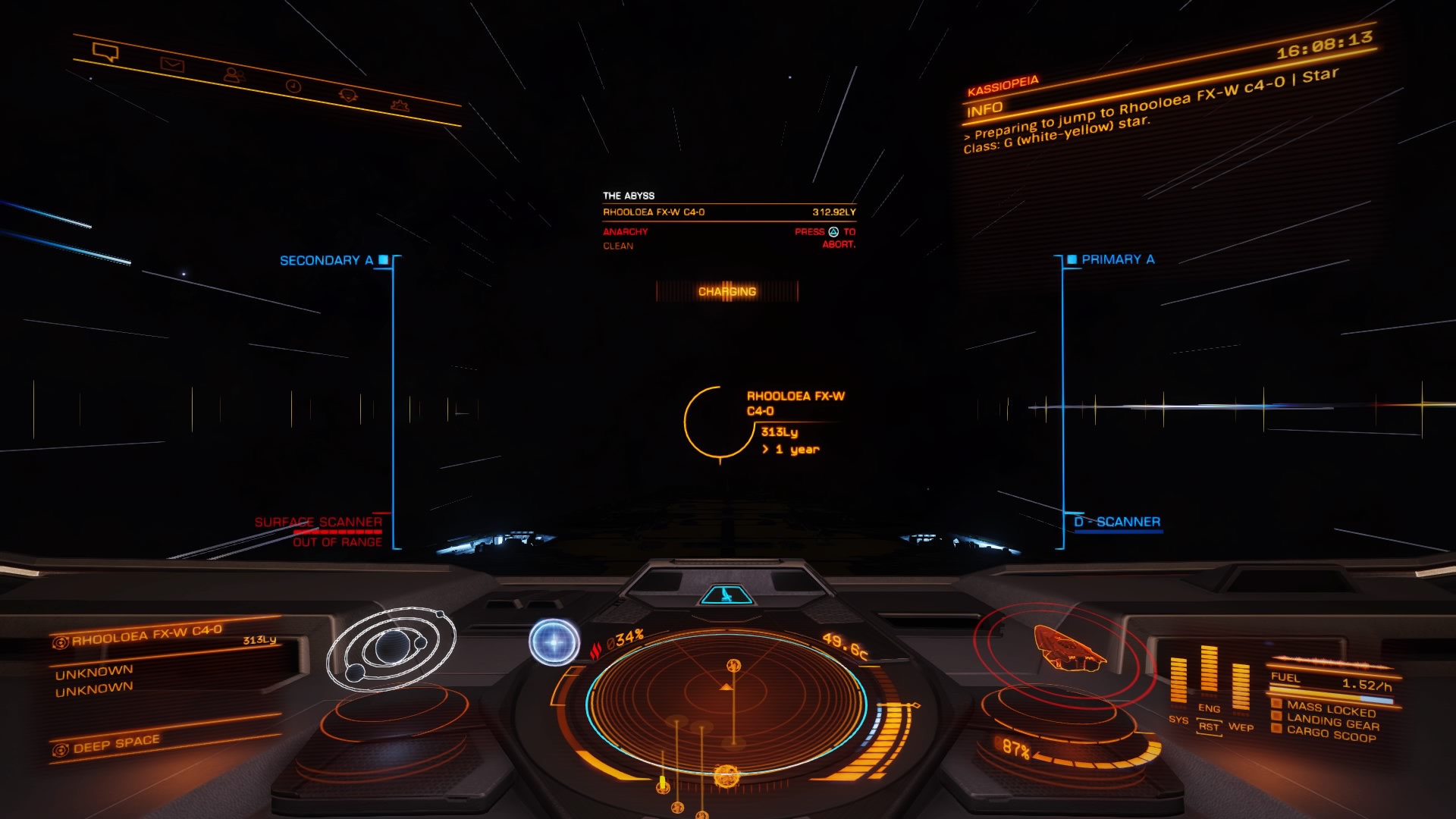 Neutron boosting is how you totally bypass Raxxla.

S
My name is schlowi123 and I'm a neutron-booster addict

For me it significantly speeds up my travel because I always FSS every system I enter to 100%. Less jumps means less scanning I'm compelled to do. I use the Spansh plotter and on the better mapped, not sparse areas it's pretty much neutron star to neutron star until I'm forced to intentionally plot a jump to a main sequence star just to scoop more fuel. I even carry an exta fuel tank on my Phantom just so that I can do more consecutive NS jumps. It's a jackpot when I come across those close binaries with a scoopable star close to a NS. Sure it usually makes it spin fast, but that doesn't make it any more dangerous, despite what people think.

Yes, its worth it. Just forget the white dwarfs, those aint worth the trouble and way too dangerous to use anyways.

schlowi123 said:
But I would greatly appreciate to know the results of your experiments
Click to expand...

Did a test yesterday. Generally it works and I have an impression that takes less time comparing to technique posted by Henkka77. I entered the cone flying 2-3 Mm/s, the turbulence was acceptable. But after several times I noticed that it's pretty easy to overestimate the cone diameter, enter a bit too fast and then exit before the FSD gets enough juice. In such case a full 180-degree turn needs to be done at minimum speed which takes ages in Phantom and even longer ages in 'Conda.

Maybe it gets easier with more experience but I'd rather stick to the technique I currently use. Henkka77's pic presents it nicely. I just skip point 2 which is completely pointless in my opinion, I've never noticed any impact of me playing with the joystick while the ship was in the cone. This way is much easier to resume scooping if necessary since the course correction is closer to 30-60 degrees than to 180 degrees.

Cubeupload is blocked by my security/spam/etc filter. Go figure. I'm assuming the image shared was this one: 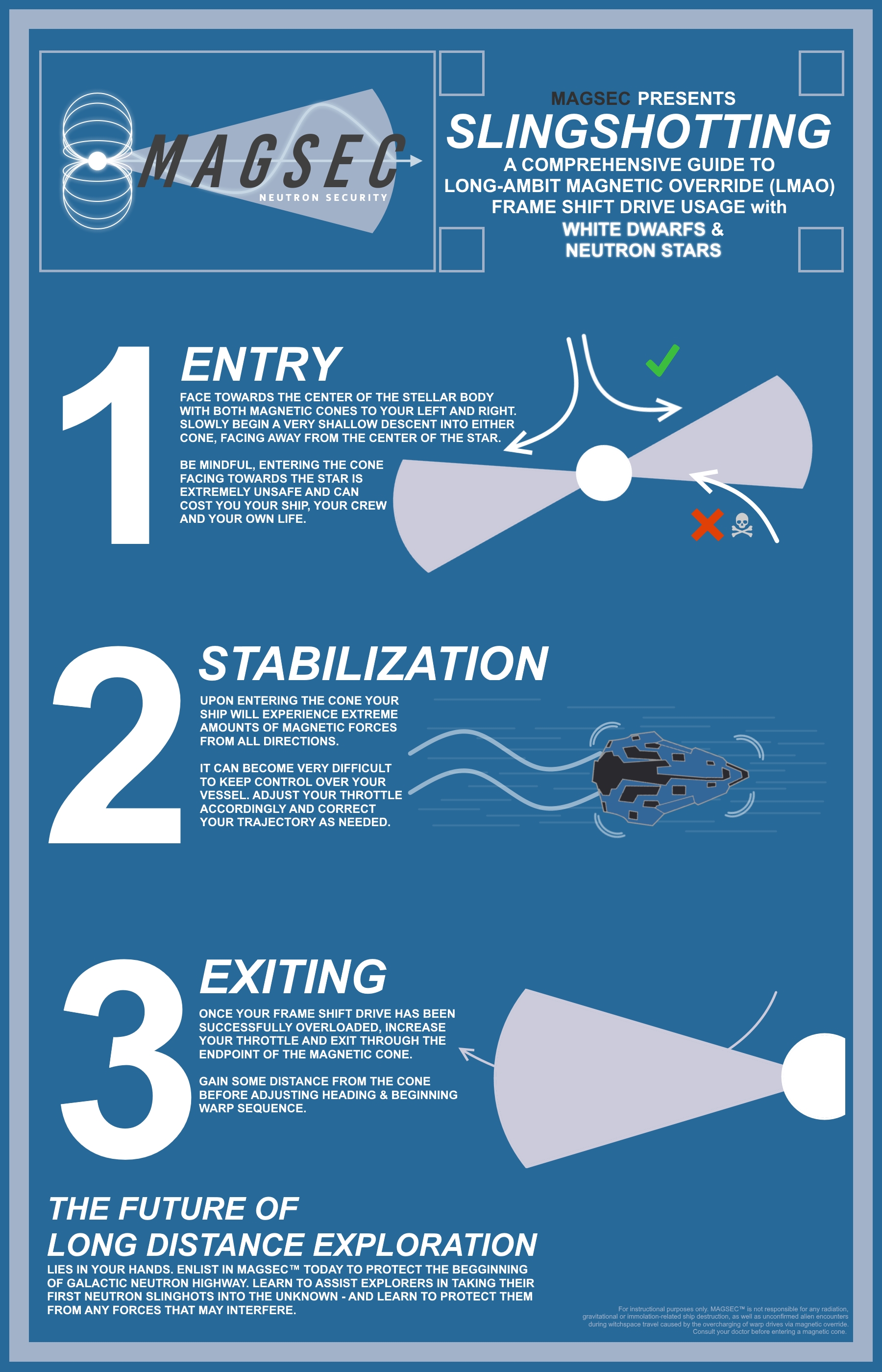 That's the way I usually do it too, unless I'm flying something that steers like a skyscraper, such as the T9. And it can go pretty quickly.

Examples from over a year ago (Pre-FSS, so I use the map to see what's there, etc, while scanning the neutron star manually. Since then, I've started adjusting the throttle more, including zeroing once the charging begins):

foobaron76 said:
Neutron boosting is how you totally bypass Raxxla.
Click to expand...

"Joke's on them, they'll never figure out that the way to find Raxxla is to go to
and die in the cone!"

Some more tests from yesterday.

I entered the cone, immediately got dropped from SC, started to suffer damage on many modules. After a short fight for pointing my ship's nose at the escape vector for low-wake I was ejected, passed out and woke up in Dove Enigma in Colonia.

Not really sure what happened. The logs revealed that my FSD had had 81,2% of health at the moment of entering the cone. Not a perfect condition but should have been enough to finish the job and exit the cone. Most likely I must have missed decreasing distance to a star since it was not in the middle of the view and I eventually entered the exclusion zone.

This way or another, several weeks of exploration data is gone.

Don't try this at home.

Yeah, some of them have small cones, and you can get dangerously close to the exclusion zone if you're not careful. I've hit a few this way, usually before entering the cone though. If the cone looks really slow and weak, it calls for a little extra care. Having the orbit lines turned on helps, but as long as you have some speed, that "impact" warning on the upper-right info panel will usually be a good sign that you're aimed at the XZ. It's easy to miss. I wish that warning popped up right in the middle of the HUD instead.

One trick I used before I got really used and comfortable with boosting was to target the star and keep a close eye on the distance while I enter the cone. I may only have a hunch on which is the safe distance, but I know it should be going up, not down by the time I'm actually entering the cone. Having orbit lines on and seeing the exclusion zone is useful too, of course. I sometimes still use the distance watching method on neutron stars out of a habit, and I always do it when I boost on white dwarfs. Those are not really worth it, but I still use them... in the Bubble where respawn is close and I don't have weeks of exploration data at risk.

I'm quite new to exploration as I'm doing my first trip to the core, but I think I'm already addicted to NS jumping. I have a VA command "Update navigation data" to automatically download route to selected star from Spansh and "Replot route" command to automatically copy next waypoint from saved route, open Galaxy map, plot route to it and close galaxy map. So it takes me like 7 seconds to plot a route to the next Spansh neutron star and I can do it while flying, no need to minimize the game or even press a button.

If it comes to supercharging - I'm flying an ASP Explorer, which is pretty light. Sometimes, like 1 in 6 times, I fall out of the cone before supercharging and have to get back into it. Also my jump range is only 37LY, so it's not as effective. I will do try to do some testing soon (after reaching Sag A*) to give some numbers on how much faster is my way compared to normal routing.

Always worth it. I consider it my thrill or kill mini game every time I use one, especially the occasional WD. After you have used so many of them experience will guide you until it is second nature.
The annoying bit is when you get kicked out of the cone before fully supercharged and have to meekly dip your toe back into the pool for the top up.

You don’t have to be in the cone for long, just a few seconds. You can even hit the last quarter of the cone as long as you throttle down enough so you don’t leave too early.

White Dwarfs are the ones I crash into occasionally. Their exclusion zone covers up a quite a bit of the cone.

Getting ejected from the cone before the charge completes is always a risk, but you can mitigate it. (And it's super annoying in slow-turning ships, when you have to get back in because this has happened). I stated earlier that I tend to zero the throttle these days as a safety measure, but mostly I do it to avoid overshooting the cone. If you enter the cone along its axis, and match speed to the swirls, that works as a really nice measure of how fast you can comfortably enter, and be able to exit soon after the charge completes. By zeroing the throttle once the charging begins, you'll coast along at that speed, until you either exit the end, exit the side due to a bad angle, or throttle up again when the charge completes.

There's only a few rules to follow, then (almost) nothing can happen :

- upon establishing the outward entry of the cone and inside, wait 2-3sec, then throttle into the blue
(might be myth or pure chance - but keeping the Throttle in the blue "seems" to assist stabilize a somewhat outward vector, sometimes almost feels like a "Cone Autopilot"
- have the nearby Neutron unlocked, otherwise the Autothrottle limiter will reduce the acceleration flying out again. I always have the next system enroute locked, allows faster egress

- dropped out inside the Cone? Execute egress procedures ASAP
(charge FSD for SuperCruise re-entry and boost the Ship into straight flight FA ON (avoid FA OFF!); a Heatsink can minimize the damage. Even when facing the Neutron in SC keep it cool and avoid slamming the Throttle to max...)

PS.
Bad things to try inside the Cone
* Misreading note : Caution when attempting to perform egress procedures vs. the missus, this can lead to unintended consequences

One more rule to follow: don't get too confident. Otherwise you might get killed by the cone after thousands of totally uneventful boosts.

I'm still in Colonia, trying to figure out what to do and where to go next.

Here is a hot tip, turn orbit lines on. This will also put a line around the star where the exclusion zone is. There is no way to get kicked out of supercruise inside the cone unless you hit the exclusion zone.

The best method is to fly towards the star-side of the cone and then aim towards the end of the cone once inside. Think of it as merging into the cone like merging onto a highway, and then fly out of the end or exit once FSD is charged. There is really little danger in these boosts if you observe a modicum of safety precautions.
You must log in or register to reply here.
Share:
Facebook Twitter Reddit WhatsApp Email Link
Top Bottom