New Regions – Why not use the ones already established by the exploration community?

Please read the Nov. 16th update: 'Thank you' letter to FD: Feedback on the region names in beta​
We are very happy that FD has decided to include the GMP names of The Abyss, The Norma Expanse, Tenebrae/Tenebris and the Orion-Perseus Conflux among the new Codex regions. The support and encouragement shown by so many in this thread no doubt had an impact on this. Thank you again

On the recent livestream FD showcased the changes for exploration mechanics that will be coming with update 3.3. Among these changes was the introduction of 42 numbered regions that will allow FD to spread rumors about possible places to discover within that region, as well as allowing player discoveries to propagate to other players.

We think this is an amazing idea! However…

The Galactic Mapping Project is one of the oldest community projects in Elite Dangerous, and although we've always understood that the project is not an official 'naming' project that FD has adopted, we hope that the rich history that has been built up around it over the past few years would be taken into consideration when Frontier Developments implement their regional overlay for 3.3.

We feel that the numbered regions introduced by FD will over time usurp the place of the regions named by the community - because the numbered region will have a game mechanic effect and thus it will be natural for people to refer to them. This would be a sad loss of the 'character' and that human touch that the community names have added to the wider gameworld for the past 4 years.


(To avoid confusion we have hidden our two original proposals behind spoiler tags. Please proceed to the third proposal below.)

Proposal 1: Implement (some of) the community named regions instead of the numbered regions
There are currently 60 community named regions, and as they vary a lot in size, we understand that it is probably not feasible to ask Frontier to adobt them as they are. However, we have tried to merge and remodel the existing community regions into a map that should be more suitable for the mechanics presented by Frontier on the stream. 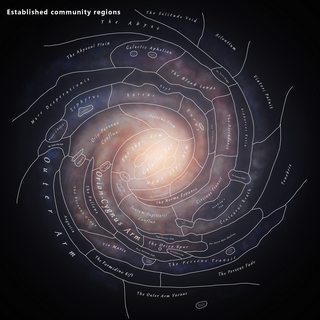 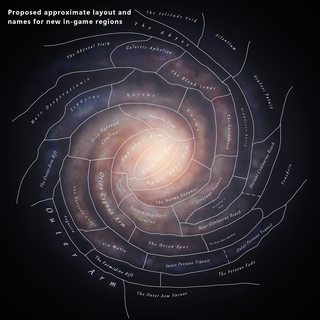 (Proposed approximate in-game region layout and names)​
Even if the new mechanics of Elite 3.3 only allow Frontier to roughly approximate the borders shown in this proposal, we would still count it as a huge improvement if they implement those regions using the community names.

This will bring continuity to the established community lore and narrative.


Proposal 2: Don´t call them regions…
If proposal 1 is not possible we would hope that FD will at least consider the following suggestion;
What we are asking is for FD to consider dropping the name "Region" from their in-game UI and instead replace it with the word "Grid" or "Galactic Sector" - as this will at least prevent confusion of having two sets of 'regions' to refer to. For example, the everyday lexicon when players describe a trip, or expeditionary waypoint, would be presented along the lines of.. "Sol, Grid 01, The Orion Spur Region.
We feel that this UI change would help prevent the community submitted regional names from being undermined, and eventually consigned to history.

IMPORTANT UPDATE: We have added a third proposal - based on a suggestion made in this thread by Ozric (source):

"My proposal would be to implement the GMPs map as a view that can be toggled on and off. That way FD don't need to change anything with the work they have already done, and we can still use the names we made and refer to them as such (if wanted) when creating expeditions."


The GMP team is very fond of this third proposal about an additional map layer that can be toggled on and off. We think this would be a good solution that might well be within the realm of the possible while still allowing the in-game inclusion of the regions established by the exploration community. 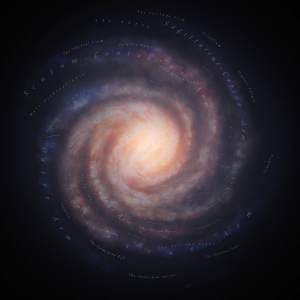 (GMP map with names of regions and galactic arms) 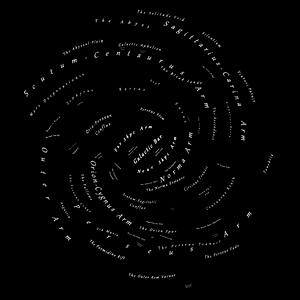 The entire team at the GMP would like to say a huge thank you to every one of you who have shown your support for this idea and the GMP in general. This response means a lot to us - so thanks again!

Also a big thank you to Obsidian Ant for featuring this forum thread in his latest video:


[video=youtube_share;sfNDp0q1oY4]https://youtu.be/sfNDp0q1oY4?t=376[/video]​
The map came out a bit blurry in that one, so we are also linking an older video of his featuring the GMP in general:

Community manager Will Flanagan has sent us a reply in this thread - thank you Will and the team at FD for your time and for taking this into consideration.

Corbin Moran said:
Why not use the ones already established by the exploration community?
Click to expand...

+1 for this! Was thinking this too.

However Galactic sectors are already a thing...

I wonder if the regions are defined from the PG engine itself, rather than being human-driven?

While I agree it would be great to use the maps we have, it simply may not be possible.

Jumping onboard this train !

I agree with Corbin Moran

I agree with Corbin Moran.