Dear people of the cosmos,

Allow me to introduce to you the Nova Navy Squadron. Nova Navy is the squadron led by Hadrian Augustus Duval representing the naval arm of Nova Imperium. Nova Imperium? Well yes, Nova Imperium indeed: The Imperial Organization that values the old traditional ways of the Empire, and wishes for reforms to occur so that the old traditions are restored, and that everybody inside the Empire is respected. This in contrast to Emperor Arissa Lavigny-Duval, who has decided to kill our founder, rather than to find a constructive compromise by dialogue. 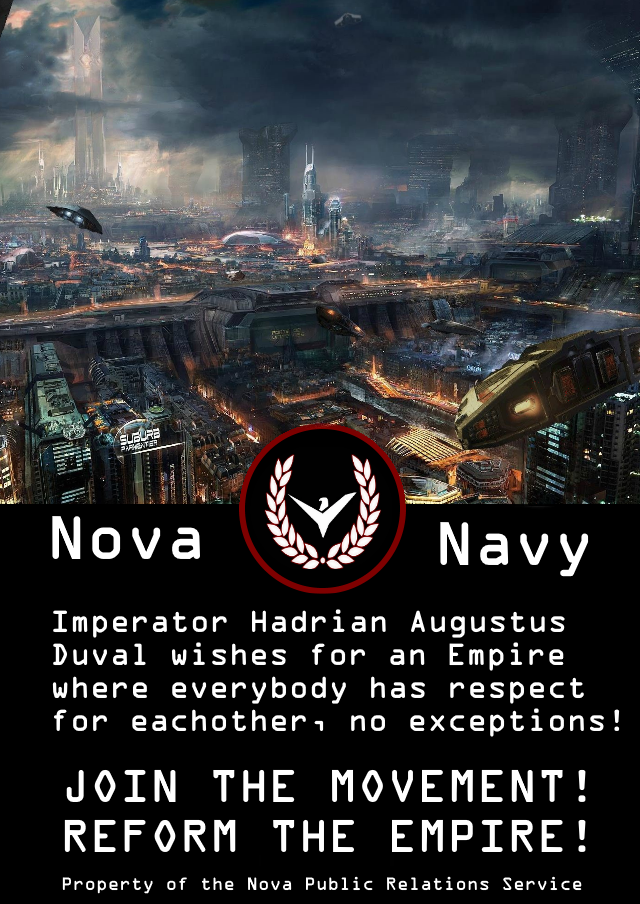 WHAT WE DO:
- BGS (We have the ingame faction of Nova Imperium to maintain. This comes naturally with all included aspects such as war, but also maintaining a peacefull state in our systems)

- PVE (Aside from the BGS PVE, we also are against the Aegis organization. This means we do our own combat against the Thargoids, on our own terms)

- PVP (Since we have quite been marked by Emperor Arissa as an outlaw element within the Empire, there will be plenty of times when we are required to defend ourselves)

WHAT WE OFFER:
- The abillity to shape the galaxy in your own way. Help us to continue the Nova Imperium storyline, by assisting Hadrian Augustus Duval in his pursuit of the Imperial Throne, and to reform the Empire to it's old values and standards, whilst also ensuring that every single citizen of the Empire is respected. How you wish to help us, is up to you.

- A healthy and friendly family-like community, with whom you can joke around and have fun with, but at the same time, can become best wingmates with as you crush all whom resist the Imperator and his Imperium!

- An unrestricted area of focus. Do you wish to support us by mining materials and resources, hunting Thargoids, researching the galaxy and the xeno, to go where no-one has gone before, or anything else? We won't judge you for what you are or what you want to do. We only want you to be able to do what you love.


Are you willing to help the Imperator and Nova Imperium?
Then proceed to the links below, or leave a comment!
Inara Page: Nova Navy
Discord: Nova Discord
Last edited: Oct 13, 2019

7 OCT 3305
The Nova Navy succeeds in winning the Battle of No Cha, ensuring it's continued rule over the system whilst defending against the Temurt Drug Empire, a cartel which challenged the Nova Navy with aid from external parties.
You must log in or register to reply here.
Share:
Facebook Twitter Reddit WhatsApp Email Link
Top Bottom