Faded Glory said:
It's not easy getting through Paris traffic, especially during rush hour.

I can attest to the Parisian traffic. Watch "Ronin" for a sample.

This is a huge loss to everyone.

Siobhan said:
We were in Paris a few years back and missed it for some reason...probably already saw too many things and I could barely walk with my stick at the time... Shame, it's too late now.
Click to expand...

I'm there with you. Pulmonary and arthritis.

Last visit was 1985. Always something being rebuilt.

Ralph Vargr said:
I can attest to the Parisian traffic. Watch "Ronin" for a sample.
Click to expand...

The forecourt of the cathedral will reopen very soon.

At the request of the rector of the cathedral Monsignor Chauvet, a place of meditation will be installed on the forecourt of Notre-Dame, around a reproduction of the statue of the Virgin of the pillar to welcome worshipers and visitors.

Only 9% of the pledges for the reconstruction of Notre-Dame, 80 million euros, have been paid for the moment.

The most important donations, promised by the Arnault family and the Pinault family, will be sent little by little, according to the estimate of the reconstruction.

This CG is going to take a while...

The first mass since the fire was celebrated this Saturday.

Celebrated by the Archbishop of Paris, the helmet was obligatory.

About thirty people (half of whom were priests) gathered around the Archbishop of Paris, Msgr. Michel Aupetit. 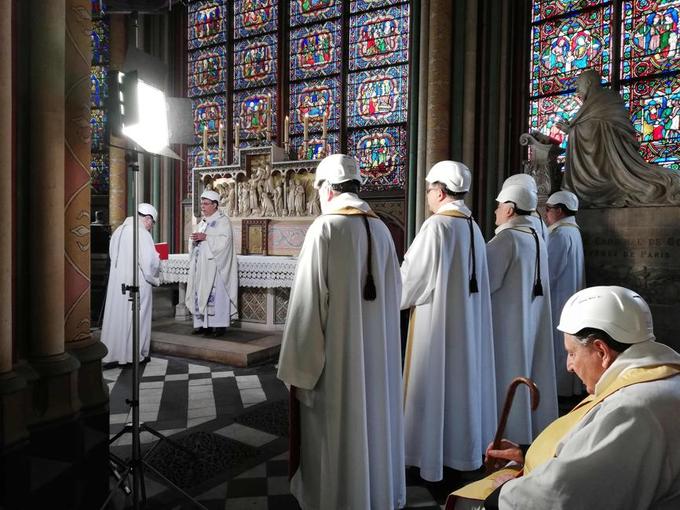 Arry said:
On-topic: Some of the latest insane ideas put forward, by those with nothing better to do.
Click to expand...

the one with the circus tent is actually apt!

Arry said:
About rich parents, paying the institutions, to have their kids grades improved. Unlike in this country; where they just pay for, extra private tutoring, instead.
Click to expand...

finland got this right: there are no private schools. if you are a rich parent and want the best for your kids, it's in your best interest that public schools are good, for all kids. no wonder they have the best education system in the world.

Patrick_68000 said:
The first mass since the fire was celebrated this Saturday.

Celebrated by the Archbishop of Paris, the helmet was obligatory.

About thirty people (half of whom were priests) gathered around the Archbishop of Paris, Msgr. Michel Aupetit.

More evidence that the CG will be a loooong one.

A miraculous discovery revives the hope of saving the clock !

An almost-twin sister of the Notre-Dame de Paris cathedral clock was found a few kilometers away, reviving the hope of being able to rebuild this masterpiece carried away by the flames with the roof.

In a storage room of the church of the "Sainte Trinité" in Paris, among statues of forgotten angels, abandoned sculptures and old furniture, a gigantic clock sleeps.

The watchmaker Jean-Baptiste Viot made an inventory for art experts and found the two-metre-long mechanism.

"It’s amazing. It’s the same ! The same !", he repeated, shining with his hand blackened the tin plate adorning the clock, to make appear an inscription that does not deceive on his kinship: "Year 1867. Built by Collin", the same year as that of "Notre-Dame de Paris". And by the same workshop.

"It’s a huge chance. It’s like finding another edition of a burning book. It’s priceless," he says.

The discovery of the clock of the "Sainte Trinité" is unexpected: "It allows us to have a base of work to remake the pieces" of that of Notre-Dame. She will serve as a stallion," said Viot.

"It's almost miraculous to have made this discovery," agrees Olivier Chandez, the watchmaker of Notre-Dame. "If we had only photos, we would have had to extrapolate, but with this model, we have all the quotations and we can start the fabrications", says the expert.

Made obsolete by the electricity that now counts the hours at "Sainte Trinité", the clock has not turned for more than fifty years. But it's enough to give a good crank shot so that the ticking can be heard again. "It's crazy, fifty years later, even the ring is functional" rejoices Jean-Baptiste Viot.

"It's the same model but there are some differences: Notre-Dame was a little more elaborate, so it's not possible to make the standard exchange."

The watchmaker would rather have a real replica found again the location that the clock occupied before the disaster, exactly under the arrow disappeared, under the roofs.

But to do this, it is still necessary that this reconstruction is part of the overall project of renovation of the cathedral. "To rebuild without a clock is a fear, yes", warns Mr. Chandez.

In any case, the master of time of "Notre Dame" refuses to design a new cathedral without its dial: "all religious buildings have a clock."

And Jean-Baptiste Viot to add: "A cathedral without a clock is like an aircraft carrier without planes".

Below, the mechanism of the church of the "Sainte Trinité", "forgotten" in the attic.

The justice presented its first conclusions Wednesday, June 26. The preliminary investigation allows the Paris prosecutor's office to advance "that there is no evidence to support the hypothesis of criminal origin".

Several other tracks are envisaged, including that of a badly extinguished cigarette or electrical malfunction.

I can imagine the joy of the discoverer.

The heat wave makes fear of new collapses of the vault.

According to the chief architect of the Historic Monuments in charge of the site, the extreme temperatures measured in Paris dry up too quickly the seals gorged with water since the fire.

The construction site suspended because due to lead.

The high level of lead taken after the fire requires precautionary measures by the workers, for the moment not respected. The prefecture wants to avoid any contamination.

The fire of the cathedral, on April 15, had caused the fusion of several hundred tons of lead, which were found especially in the frame of the spire and the roof.

The labor inspectorate noted after visits that the rules for the people traveling on the site "were not sufficiently enforced".

The date of resumption of the work to secure the cathedral, interrupted because of lead contamination, is still not fixed. The structure of the building is still very fragile.

In fact, the structure remains very fragile, particularly the vaults always risking collapses that would jeopardize the building. «The work to secure the cathedral will not be completed before the beginning of 2020», says the Ministry of Culture.

The joy of restoration.

Here in STL, the stainless steel inside the Gateway Arch is starting to rust out. It was completed in 1964. It's a stressed skin catenary arch, so if one section fails, the 200 meter tall structure comes down.

The bases flood out during heavy rains.

Here in STL, the stainless steel inside the Gateway Arch is starting to rust out. It was completed in 1964. It's a stressed skin catenary arch, so if one section fails, the 200 meter tall structure comes down.

The bases flood out during heavy rains.
Click to expand...

Fortunately, there are no homes in immediate proximity.