Operation IDA: All Star-Port Repairs in The Pleiades are Complete.

As of this morning, Copernicus Observatory in Asterope is back online after being repaired this past Monday.

This means that repairs to ALL stations attacked in The Pleiades are now complete.
The Totals: 17 stations including 3 re-attacked stations (20 repaired Star-Ports in total) all completed in 15 months.

The past 15 months have been a monumental task as station repair in The Pleiades required many long range commodities (Think 500-600 LY round trips for a single commodity) in addition to difficult conditions that were present which would make our task even more challenging.

Obstacles:
1) 10% - 20%+ of all delivered commodities do not count. This is a known issue since we began hauling & continues to this day. Fdev is aware of this & one day we hope to see this resolved.
2) Many Commodities were in short supply or extremely far away.
3) Hyperdictions as well as interdictions were numerous.
4) Various BGS issues that would cause a loss when selling or lock-downs at commodity resource stations in addition to the usual wars, civil wars, elections that we had to manage & overcome.
5) The renewed attacks on Pleiades based systems & stations this past December through February including our own sister systems in which we learned to adapt & become not just haulers, but a defense force to push back infestation & Incursion.

*Unfortunately we were not always successful in this last regard as even with support from our allies, we lost stations including our own Artemis Lodge.

In the end however, we have finished what we set out to do and The Pleiades (barring no future attacks) & all stations located therein, are now fully functional.

When we first arrived shortly after the initial December 14th, 3303 attacks (The start of the 2nd Thargoid War), we were few & the task ahead was enormous. With each week, more & more stations were attacked & what we were attempting seemed even more daunting. As the attacks quickly advanced into the Bubble we questioned whether we would ever get the opportunity to reach the bubble itself.

Over time however more & more CMDR's came to The Pleiades to help. It was slow going those first 4 months & some of the stations had monstrous totals to complete, even after Chapter 3 dropped which significantly lowered needed Station commodities. 2 million tons of needed commodities post Chapter 3 for a few stations would take us 6 weeks & when you consider the factors mentioned above, often selling for losses, deliveries not counting etc... all of it can test the morale of even the most resolute CMDR.

Still, we carried on & stations came back online. By The Summer of 3304 we had even more CMDR's joining us & assisting our efforts.
At it's core, Operation IDA though now a PMF, with presence in four systems & control of two, is in reality a volunteer group of firefighters from all walks of the galaxy.
People come & go but our numbers have managed to steadily increase.
During the Holiday Haul this past winter, we set records for deliveries, raised $1100 for a real life charity & saw yet another upsurge in haulers that continues to the present day.

We started in The Pleiades essentially alone but over time, new groups arrived & friendships were forged.
Sirius Inc. Hanks Alliance of Anti-Xeno, AXI, Galactic Pathfinding Group, Squadron 42 as well as other groups not native to the Pleiades but whom came to help or defend.
We worked together & helped each other as we continued to haul & repair. It was Glorious.

For many of us The Pleiades have become home. There is so much to this region of space that is rooted in the central story-line of Elite Dangerous.
So much mystery to explore & document here.. to this very day still. The Pleiades is a magical & terrifying place.

And we helped stabilize it.

We could not have done this if not for all of the people who have hauled for OP-IDA. All of you insane, mad, driven, wonderful people.
You have all done something incredible. Each and every one of you. You deserve the greatest of o7's

It's not a glamorous job or even a profitable one at that. It comes with no accolades or glory & we've certainly never tried to vaingloriously trumpet our efforts at all.
But we feel it is an extremely important aspect of game-play that we are very proud of.

While myself & a few others will remain behind in The Pleiades to keep watch & commute to the Bubble to haul... Operation IDA is now Leaving our home to go where we're needed most.

With One Chapter Ending, Another Begins:

We have decided to forego the next 6 immediate damaged stations & jump right into the central bubble.
We're there right now working on Levi-Cevita Dock in HIP 21167. The Fatherhood is in Kunuvii working repairing Weil Station, we're talking to other groups as we speak, right now as well.

We've targeted a cluster of Star-Ports that are located in the middle of the bubble and are starting an Outreach/Recruitment program.

We're looking for allies to tackle this grouping of Stations with us.

With the exception of a few,
1) Bubble based attacked stations do not require the incredibly high amounts of commodities we've seen with Stations in The Pleiades.

2) Bubble based Repair targets do not require long range hauling.

3) Bubble based attacked stations are within a few jumps & close by to the general population, most who reside in the bubble.

We can supply support, tools, knowledge & experience to enable you to either join us or host your own repair efforts.

The War is very real & intensifies each week. Humanity is at risk even if many wish to not acknowledge this.
In the coming weeks look for more information on how you can help us or assist in the repair of damaged Star-Ports. 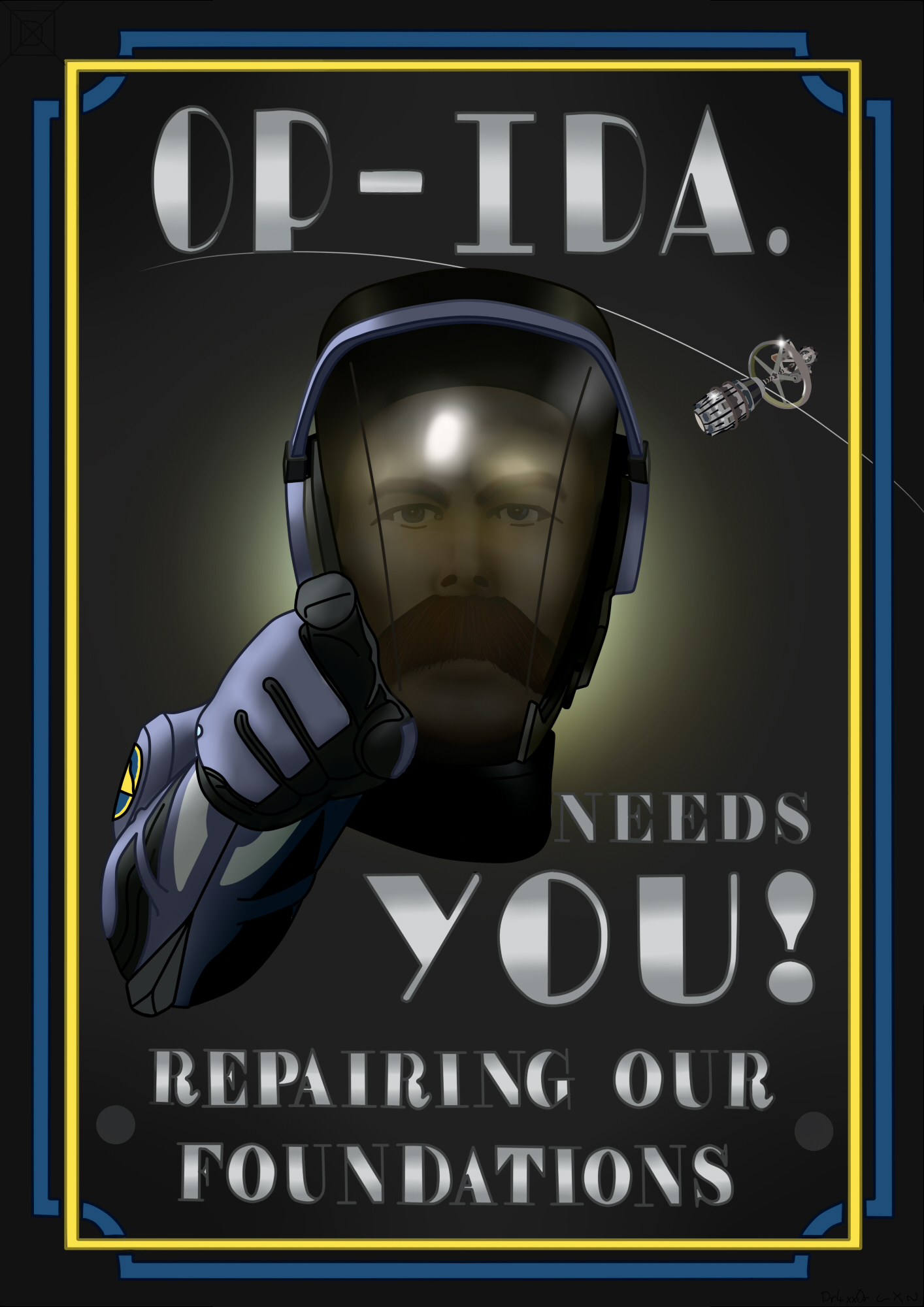 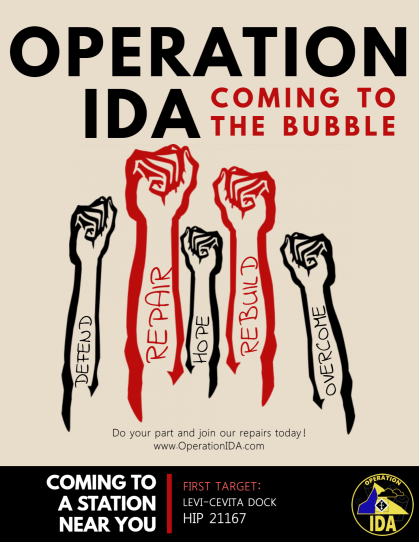 Fab OP-IDA coming to The Bubble poster by CMDR Light027

very well written and embodies the sentiment of many !

I try to keep a Cutter in the system you are focusing and drop by at least a night or two each week to pitch in, and am always amazed at how much gets done in such a short time on occasion. I'm hoping more will find interest in contributing what they can now that your Bubble Bound, great post.

With you on this. I don't think I'll manage to keep up with hauling constantly, but I will try to hit a target of at least 15000 tons delivered each week. Only 20 or so hauls in my Cutter, but hopefully will make a difference.

Deejayeff145 said:
With you on this. I don't think I'll manage to keep up with hauling constantly, but I will try to hit a target of at least 15000 tons delivered each week. Only 20 or so hauls in my Cutter, but hopefully will make a difference.
Click to expand...

I think many people don't realise how much the "small" bits can help. 15000 tons is 3% of a station needing a 500k repair, so with only about 32 people more who put in the same effort you can have one of these stations fully operational again in only a week. It all adds up so in the case of station repairs every little bit does indeed count.

Im glad you have moved into the bubble, ive been assisting on getting a couple of the stations there back online and will no doubt be targeting others in the coming weeks and months.

I also wonder if Frontier will put together a Decal for all those players who helped repair the Pleides.

Rhaeg said:
I think many people don't realise how much the "small" bits can help. 15000 tons is 3% of a station needing a 500k repair, so with only about 32 people more who put in the same effort you can have one of these stations fully operational again in only a week. It all adds up so in the case of station repairs every little bit does indeed count.
Click to expand...

I'll be doing my bit anyway. I definitely noticed with Artemis and Copernicus how quickly the numbers dropped when a group where focused on it and that was with long distance hauling.

Rhaeg said:
I think many people don't realise how much the "small" bits can help. 15000 tons is 3% of a station needing a 500k repair, so with only about 32 people more who put in the same effort you can have one of these stations fully operational again in only a week. It all adds up so in the case of station repairs every little bit does indeed count.
Click to expand...

If I get involved, this is how it would have to be, because hauling cargo is not my idea of fun. I might only haul 1500 (that's one zero less than your example) tons for a station before getting bored, but if that helps, then sure, I can see dusting off my Type-7 cargo ship and making a few trips.

Things are afoot in the Hutton Truckers.... We have some plans to kickstart this repair lark. Having already done 1 station in 2 weeks with 5 commanders. I'm organising an event to try and do something insane I'll post more when everything is finalised and ready to go...

Sisyphean pizza delivery. I don't know how you do it.

About time! Nice to see you guys around

I salute your incredible efforts CMDRs! o7 I would come to help if I hadn’t decided to work on the Colonia engineers. I may beef up my alt to join forces.

I had helped a little at the beginning of stations repairs, but having runs don’t count deterred me from the task…

Uthxis said:
I salute your incredible efforts CMDRs! o7 I would come to help if I hadn’t decided to work on the Colonia engineers.
Click to expand...

I have an idea - we'll send the Thargoids your way. Win, win!

Also, for folks who read Reddit as well, here is a very informative post by TheOriginalB who in addition to writing up a weekly post detailing all aspects of The Thargoid War & what you can do with helpful insights, links & the like, has also written up something equally informative regarding OP-IDA. It can be found here:

Happy to report that we have finished our 1st Bubble based station, Levi-Cevita Dock in HIP 21167 in 5 days.
Look for it to be online this Thargsday.
Our next target is Gardner Hub in Bhagutusk

Some fairly big news in a few days coming as well.

Gardner Hub in Bhagutsuk has just been completed in 36 hours.
This is the 2nd central bubble station OP-IDA has repaired.
A remarkable effort again by our pilots.

Mattingly Dock in Padhyas is the next repair target.

We'll be interviewed on Lave Radio tomorrow, look for an announcement then regarding this coming Saturdays planned event.

Have a listen to @LaveRadio live today aboard the orange sidewinder as Cmdr Ninj & myself will be interviewed re: All things OP-IDA & the future of the group.
https://laveradio.com/live/
http://twitch.tv/laveradio

You can listen to it as well at a later date as they make all broadcasts available to stream after initial airing.

Huge event for the Hutton Truckers being announced on Hutton Orbital Radio on Thursday 4th April at 8:30pm-ish (http://huttonorbital.com/ )

This will be an event to fix stations you can join in by downloading the Hutton Helper and EDMC. (Details at http://Hot.forthemug.com for the helper)

We'll require every cmdr who's available to deliver as many materials as they can...

The full bonkers plan will be unveiled on Thursday's show. It should be a lot of fun and there are a lot of things we are going to give away too