Very pleased to announce that Ramelli Terminal in Li Tzicnii, a station over 100,000 LS from the main star has been repaired within the past hour with plenty of time before server reset.
Congratulations to all involved! Truly inspiring effort!

Waiting on server reset before announcing next target.
Exciting news ahead as well.

We are halting all Repairs on Resnick Dock in HIP 24046 & Moving on to Empire Space!

This system had been in a Faux Incursion state the past few days, with Galmap & the System Map showing it not in Incursion (which it had been in the previous week and which Incursion systems show as when the system is highlighted in Galmap). The past few days it has been listed in GALMAP & The SYSTEM map in BOOM State (Not in Incursion State). In Galnets Thargoid Activity Report the past few days HIP 24046 was listed as BOTH Moderate Thargoid Presence AND having NO Thargoid Presence, which indicated an issue on FDEV's end. AX-CZs WERE present. While in system immediately AFTER this mornings server reset, The Galmap AND System Map changed to None State, The Galnet Thargoid Activity Report changed and had/has NO MENTION of any Thargoid Presence in the system and checking the system both from The Station, Super cruise and scanning the Nav beacon, showed NO AX-CZ's. This has changed this morning and once again, AX-CZ's are populated in multiple locations thoughout HIP 24046.

There is a ticket out on this now and WE URGE YOU TO COMMENT.

Regardless due to the instability in Fdevs mechanics for Infestation & Incursion, we can not risk our CMDR's efforts being in vain should we repair this station and see it Attacked again due to Fdev not being on top of their game. That being said, our NEW REPAIR TARGET is part of a new area of The Bubble we've decided to tackle which will be focused on the immediate areas around Achenar in EMPIRE space.

We had hoped to finish off Resnick first but we can not wait on Fdev at this point.

Operation Ida has always been free of politics and we go where we are needed & currently, we are needed in Empire Space.
We look forward to assisting our Imperial friends & allies.

Our Next Target is Barnwell Station in UGP 145 and again, will be one of several targets centered around Achenar in the Heart of The Empire.

Apologies again for having to redirect targets like this but it's for the best & as always we appreciate the hard work everyone has put in these past few weeks. You have all been amazing and Brilliant!

Go forth to The Empire, let's repair some stations and Don't forget to BASK! 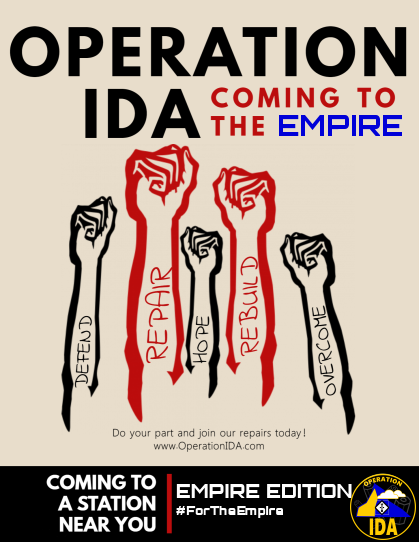 Repairs on Barnwell Station in UGP 145 have been completed. This is the first station of a group we're focusing on in Empire space.

Any news on the delivery bug? Fixed?

Nope, no changes. The bug is still present.

Perhaps you should start ganking noobs until this bug is fixed. Worked for the drag changes

(Love the Sisko gif, is that where he was busted by the Romulan for lying?).

Bad news about the bug indeed

Repairs on KRAMSKI Holding in CD-54 471 was completed & verified via Galnet this past Sunday.
Expect to see this station online Thursday.
New target is Dominique Holdings in Brib on behalf of Lavigny's Legion as repairs in Empire space continue

As of 5 minutes ago & the last commodity dropped off, Galnet has verified that Weil Station in Kunuvii has been completed.

Congratulations to The Fatherhood for repairing this, their 2nd station.

This was a huge accomplishment as Weil Station needed well over 70k CMMs which are difficult to obtain especially in the numbers that were required.

Last night prior to this mornings server restart, final repairs were completed on Dominique Holdings in Brib.
The new repair target is Fabian Terminal in Badbadzist.

How many stations have Op IDA repaired now?

A quick look at the publicly view-able Operation Ida spreadsheet appears to be around 40+ Repairs.

You can see for yourself by going to https://www.operationida.com/spreadsheet and checking all stations.
That spreadsheet will show which stations have been repaired and if Op-Ida did it, or did it in concert with others.
The spreadsheet also shows the 15+ stations repaired by other groups entirely as well as what remains and is still in need of repair.

It took us 15 months to repair all stations in The Pleiades including repairing 3 of them twice due to re-attacks. (Special thanks to The Winged Hussars for repairing Obsidian Orbital) That's 17 stations (+ 3 additional re-repairs eek).

Since we hit the bubble this past March, we've been able to repair that same amount+ due to all needed commodities being close due to... THE BUBBLE, & many many more and new participants helping in the cause.
It's easier for people to assist in the Bubble then when we were in the Pleiades.
No more 550+ round trip hauls really makes a difference.

Still, even with the recent news regarding The Thargoids pulling out of The Bubble, there is still an insane amount of stations remaining in need of repair.

Thanks for the info
And yea, still dozens of stations to repair!

Btw, just counted the repaired stations, & it's currently at 75! Amazing!

R
We should probably do some kind of event or celebration when the 100th station gets repaired.

Sounds good , what are you thinking?

R
What a difference a day makes. With the Thargsday tick, it certainly looks like rebuilding the Pleiades will be a part of getting to 100 fixed (and refixed) stations.

R
The title of this thread is apt, as Operation Ida will be returning to its foundation. Recent Thargoid surprise attacks have damaged stations in the Pleiades sector. Now that the fires have been put out, it is time for reconstruction to begin. Op Ida is coming home.

Our first target in the Pleiades rebuild is Cyllene Orbital in Atlas. This is one of only three refineries in the region and is of significant strategic importance. We have rebuilt this station twice, and will do so once more.

We welcome any and all commanders interested in helping with repairs. Just stop by our discord if you would like more information.

R
Foundation Repaired! Back to the bubble.